After the draw of the UEFA Champions League was announced, some mouth-watering groups were formed for football fans to look forward to. One of those groups was group A. It was seen as the “group of death” by many due to the presence of Bayern München, Atletico Madrid, RB Salzburg, and Lokomotiv Moskow all filling up the four available spots.

After a first-round that didn’t disappoint, the second round promised to be an interesting one as well as Atletico Madrid took on RB Salzburg. Both teams slipped up in the first round, so the two were eager to reaffirm themselves in this intriguing battle.

This tactical analysis will look to analyse both teams’ tactics. This analysis will also give an insight into the strategies both coaches implemented in order to win the game.

Diego Simeone lined his side up in his favoured 4-4-2 formation and made three changes from their La Liga encounter against Real Betis. Renan Lodi replaced Mario Hermoso at left-back, whilst Lucas had to make way for Hector Herrera. Thomas Lemar was left out for this game so as to reunite Luis Suárez with João Félix up top. 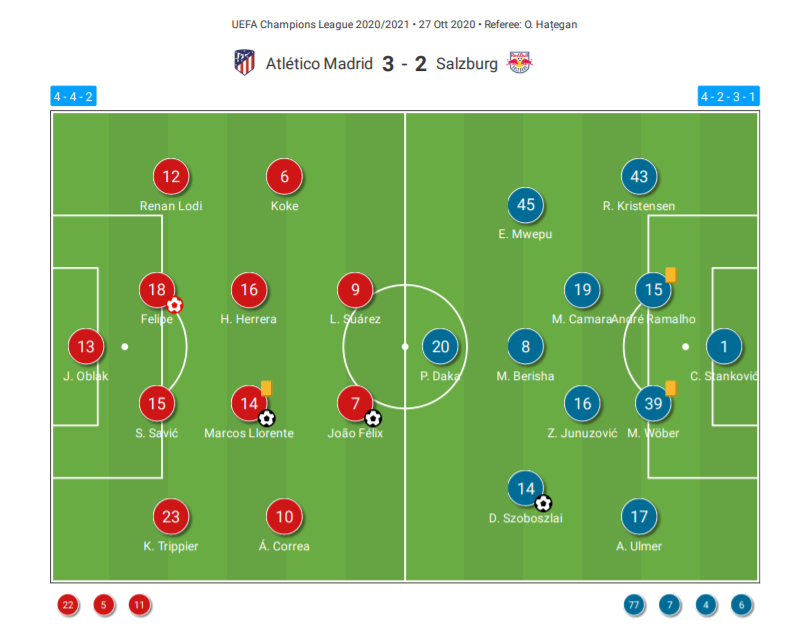 Jesse March chose the 4-2-3-1 formation and was a bit more radical as he made five changes from their win against Rapid Wien. Patson Daka, Enock Mwepu, Andreas Ulmer, Zlatko Junuzović, and Maximilian Wöber all came into the starting XI for this Champions League game.

Atletico Madrid have the better players on paper. As a consequence, they took the initiative by trying to break down RB Salzburg’s block. But Salzburg didn’t make it easy for Atleti. In order to prevent any danger from the home side, March’s men fell back into a medium block. From here they waited for one of Atletico’s centre-backs to penetrate with the ball to start an aggressive press to the side of the field.

Once this happened, Daka used a curved run to shut off any passes back or switches to the other side with Valon Berisha placing a cover shadow on the pivot and the winger closing of the pass to the full-back. Mohamed Camara prevented the opposing midfielder from receiving centrally by marking him. If the Atletico centre-back could break Salzburg’s lines with a pass, the last line were ready to step out and pressurise any player who could receive between the lines as seen in the below image. These defensive movements from Salzburg looked to force a pass to the centre and to intercept the ball there. 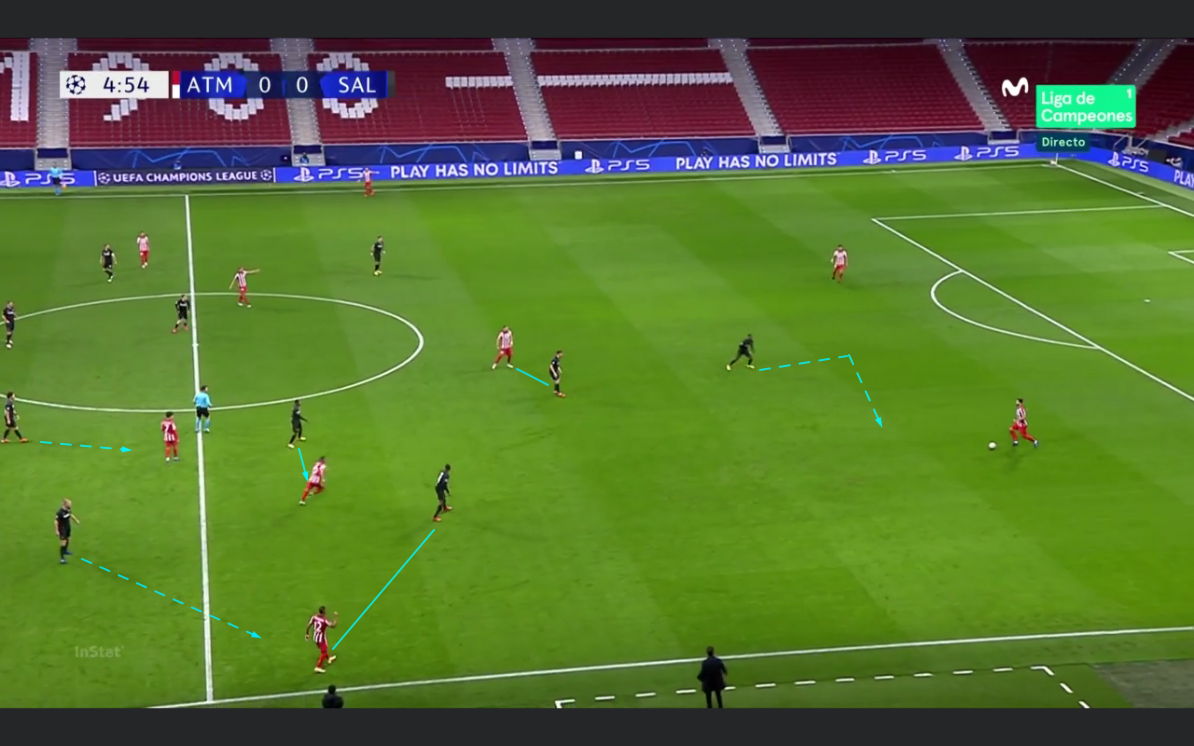 But Madrid tried to find a way through via some creative tactics by Simeone. By forming an overload in midfield, Atletico created multiple passing options which made it difficult for both Salzburg pivots to close all passing lanes to the three Atletico Madrid players between the lines. In the below image we can see how Koke moves inside from the left and Félix drops from the front line to create that numerical superiority. Here, Ángel Correa, Félix, and Marcos Llorente occupy the space between the lines. 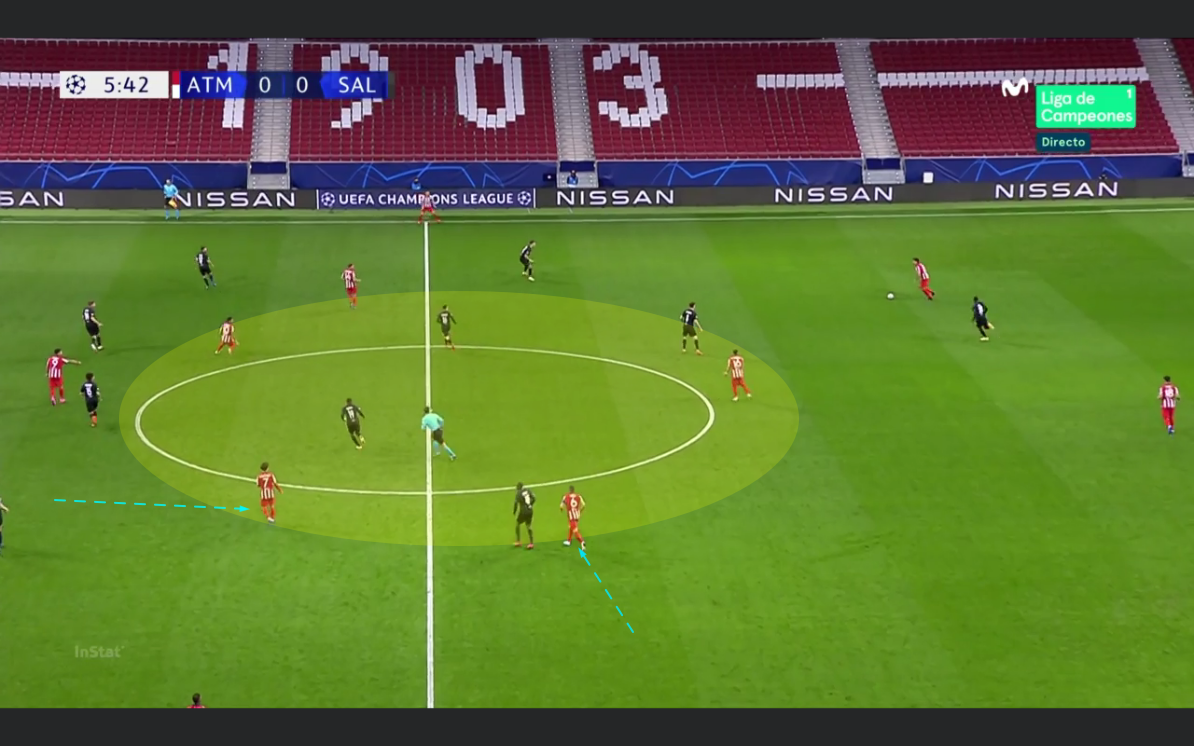 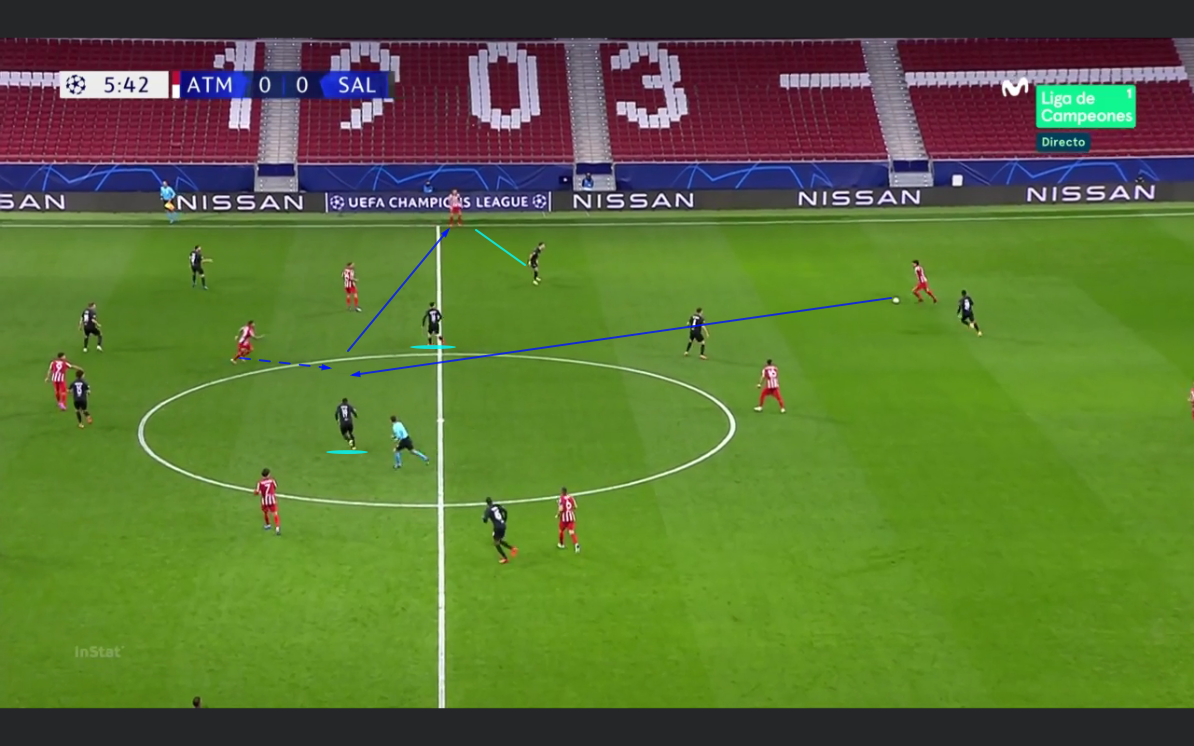 Atletico could now progress to the final third when the full-back possessed the ball in this area as a 1 vs 1 situation occurred on the outside. This meant that the Salzburg full-back had to step out and leave his last line to press the outside. Consequently, space opened up between the full-back and centre-back channel. Once Atleti penetrated this channel, a simple ball into depth by the full-back caused danger from a potential cross coming in. 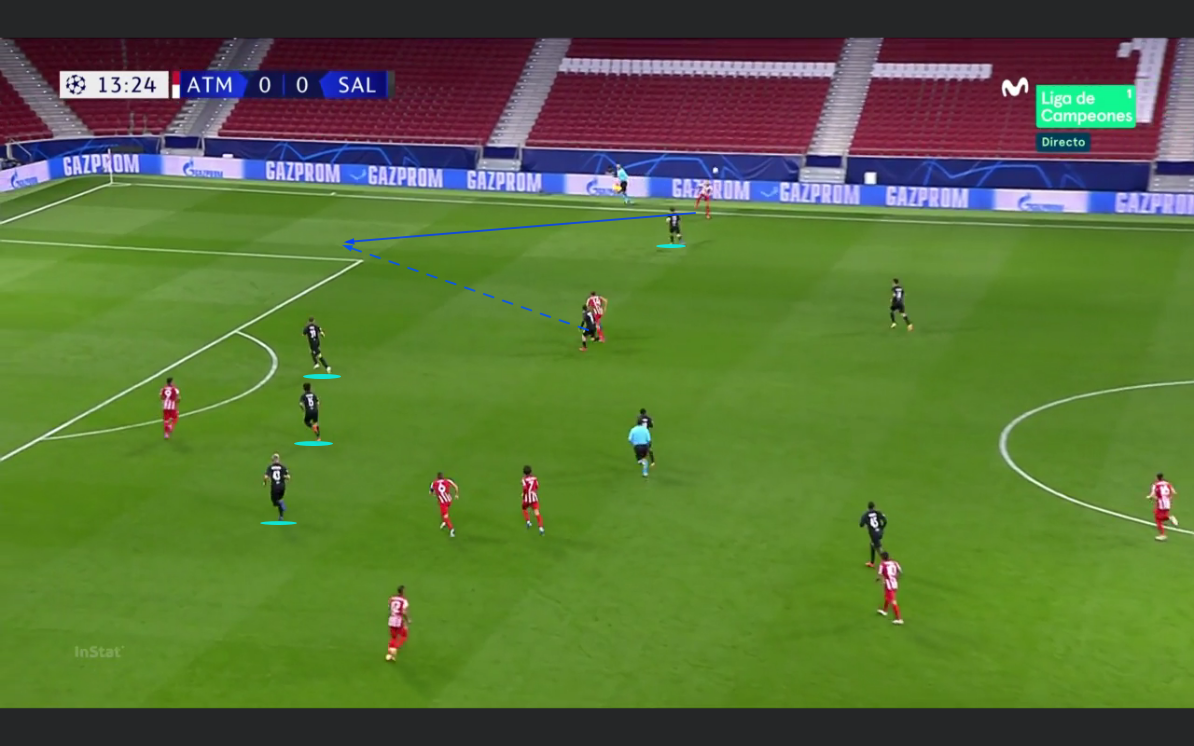 Another way Simeone’s men tried to create danger was through a wall pass from the full-back. The concept ‘wall pass’ comes from Premier League manager Marcelo Bielsa. Bielsa believes that there are 36 ways for players to communicate with each other through their passes – how to communicate through a pass is best explained by the wall pass.

The below image clarifies this as Lodi drills in the pass to Súarez and Félix running into depth to receive behind the opposition last line as the third man running. 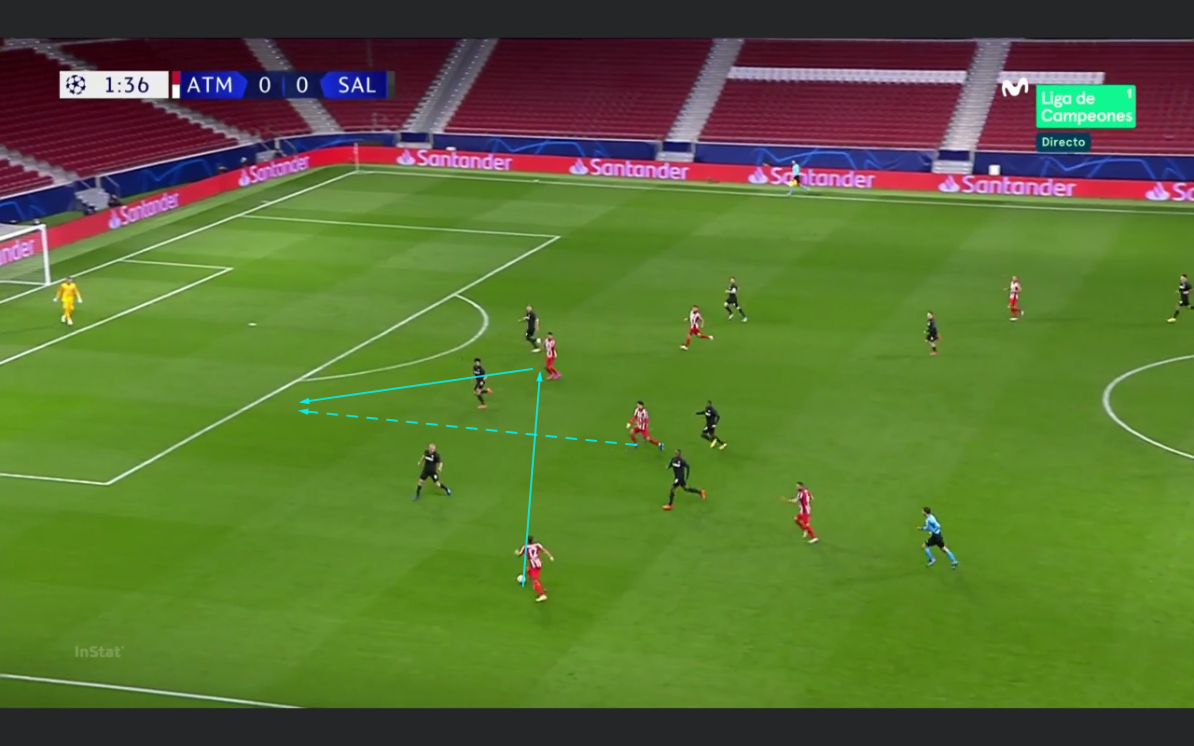 Atletico differed in this game between high pressing moments and staying back in their well known low block. In the below image we can see their compact low block existing of two lines of four and two strikers. 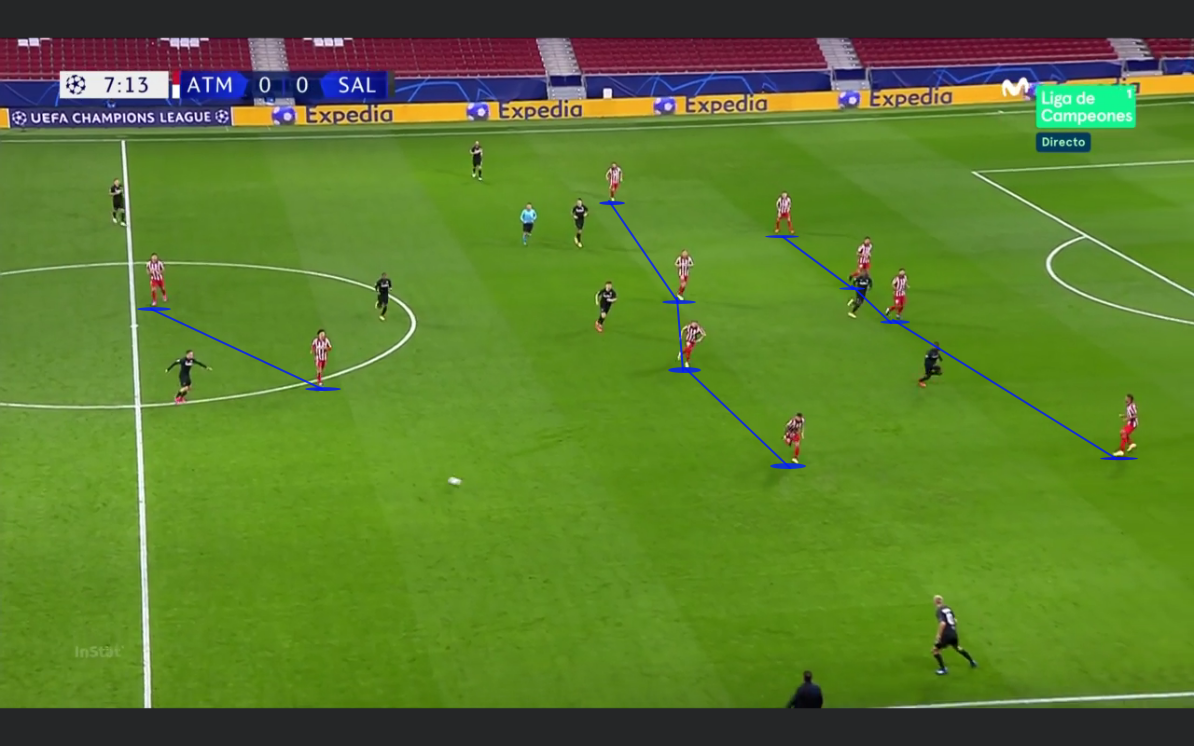 Consequently, Salzburg would have a difficult time breaking the home side down. But through rotations, they tried to find space centrally. As mentioned above, Salzburg started in a 4-2-3-1 formation but in possession, it would change to a 3-6-1, as a midfielder would drop in between the centre-backs to create a back three whilst the full-backs would push up to stretch the midfield line and the wingers would move inside to the half-spaces. 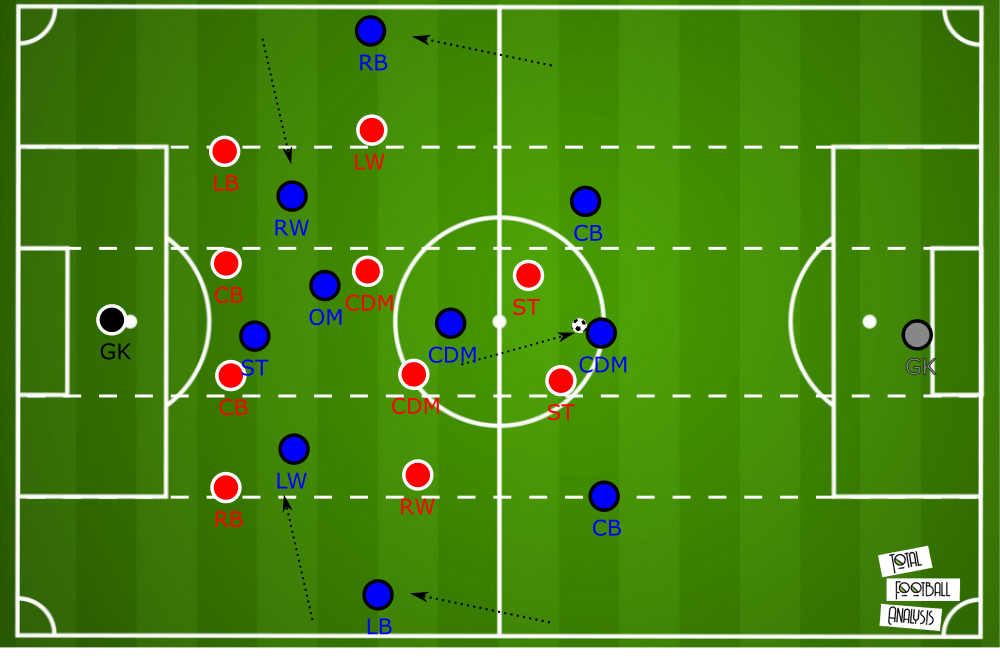 These specific movements would be the base to breaking Atletico Madrid’s block. Once every player was into its position, a central rotation occurred. Whilst the dropped midfielder would collect the ball from the centre-backs, he would then drive forward with it. In order to the create space between the lines, the inside winger would move to the outside to attract a cover shadow from the covering midfielder.

As a result, a passing lane to the striker would be available and as the offensive midfielder makes a run in behind, the centre-back cannot follow him and mark him closely. Instead, the striker Daka can receive and turn between the lines. This gave Salzburg the opportunity to drive at and break down Atleti’s block. 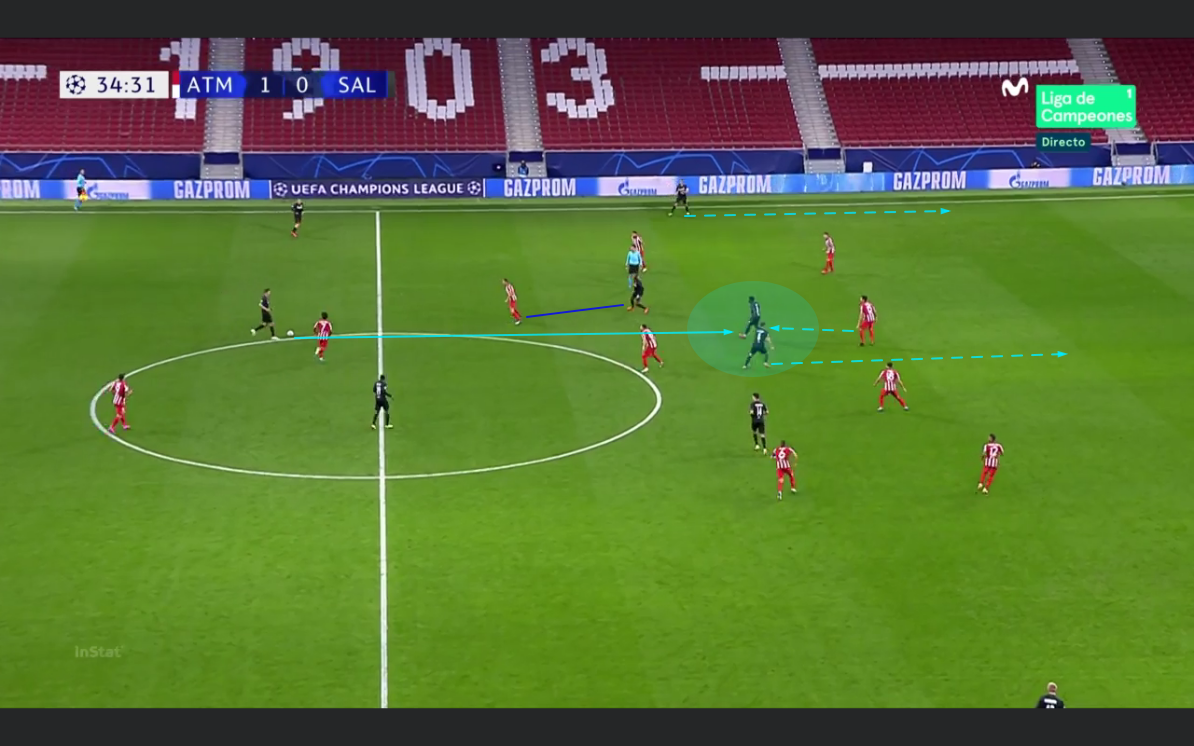 As mentioned earlier, Atletico Madrid tried to press high when the occasion occurred. After seeing them press high a couple of times, it was surprising that Salzburg didn’t look to build more from the back and attract that high pressing from the home side. Due to a rather lacklustre pressing intensity from the front by Súarez, what followed was players running for two and out of position.

Here, Félix jumps from the dropped midfielder to the centre-back, where the others follow an opposing player, Súarez is still switched off not contributing to the press. This eventually results in Salzburg playing out from the back. 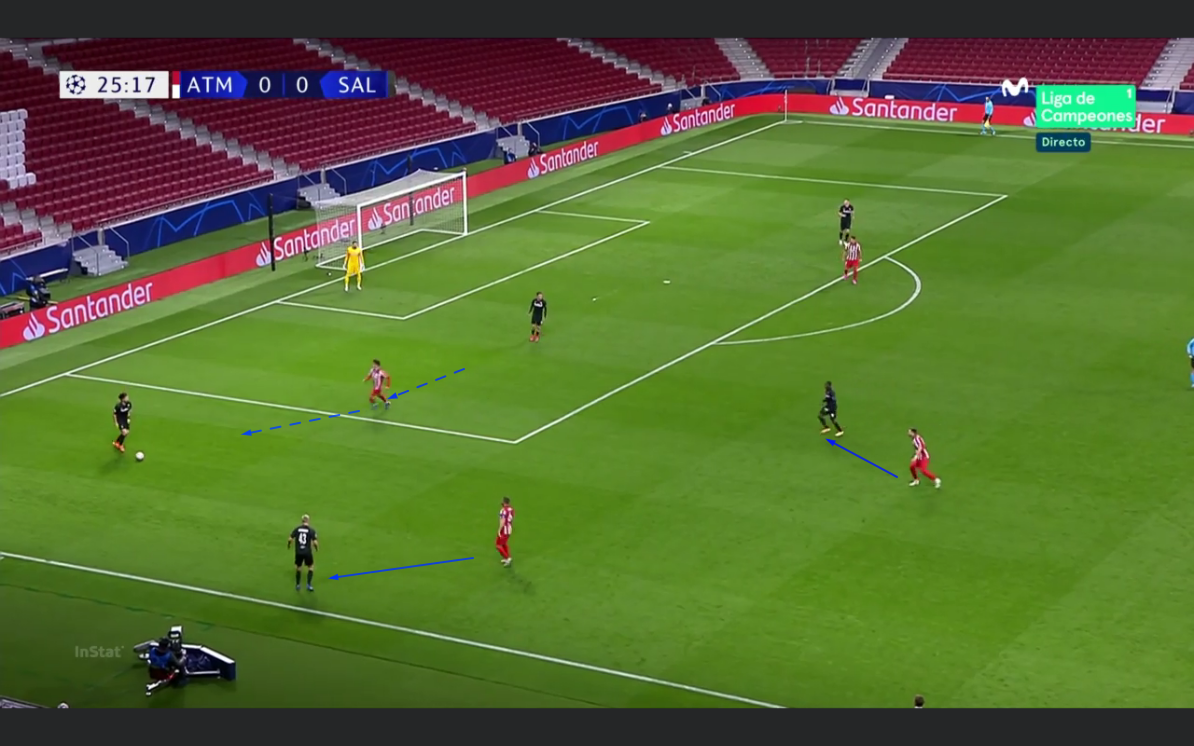 As we could see above, it was a man-orientated press that Madrid applied. This was very extreme as the image below clarifies. The left-back Lodi follows his man to the centre and as the Berischa moves to the outside, the Atleti centre-back covers him leaving the centre occupied by only one centre-back. When every player follows their man closely, this kind of press can be very effective, but it also holds many risks when only one player is switched off. 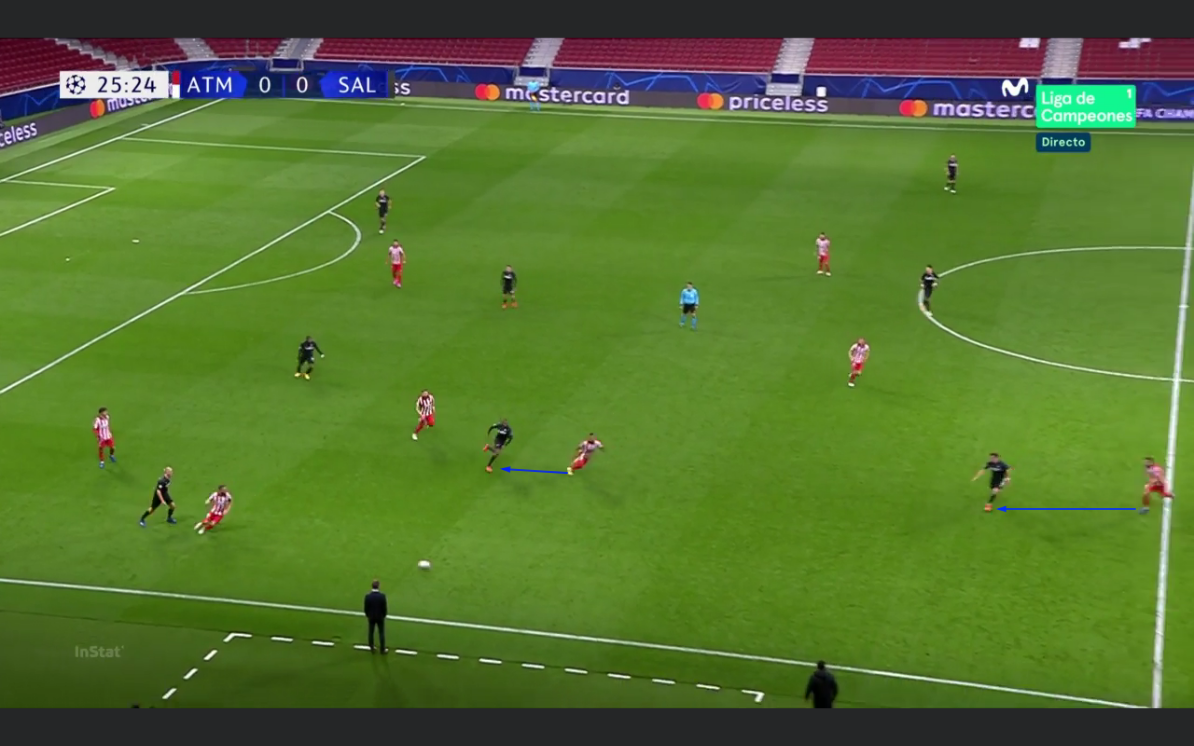 An example of Salzburg playing out due to slick movement as the man-orientated press is easily outplayed. 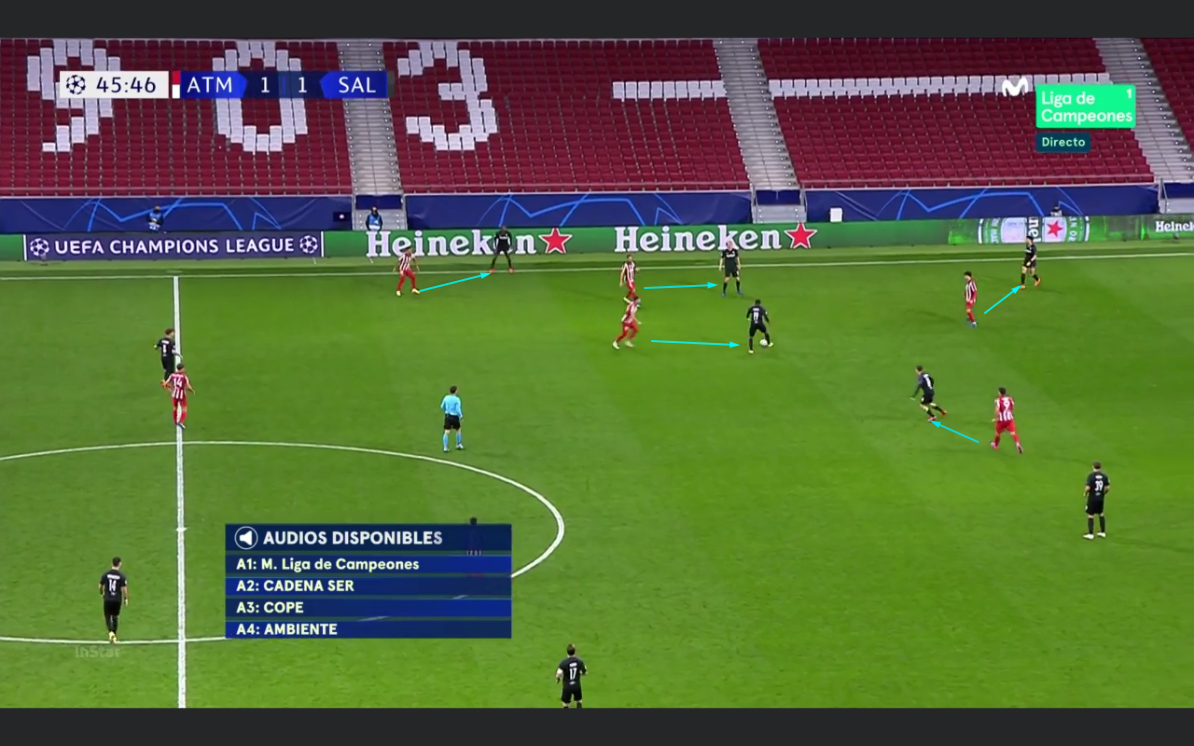 What follows is Kieran Trippier stepping through to cover a pass to Berisha, which creates space in behind him. This was exploited by Ulmer to eventually assist the goalscorer in this fast and direct attack. Note how this occurs after attracting a Madrid press in their own half. 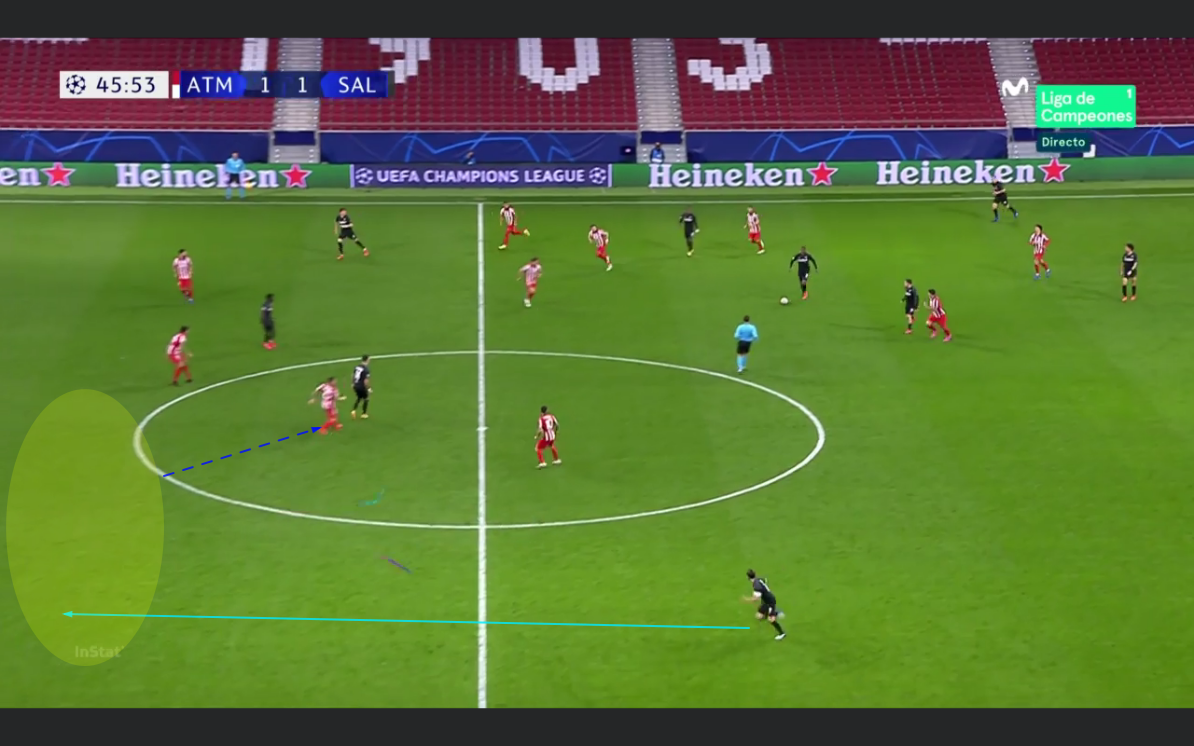 Atletico’s final roll of the dice

As Salzburg took the lead, Simeone had one more trick up his sleeve. In order to break down the away side, Simone asked Koke to drop next to the centre-backs and create a back three in possession.

In the below image we can see that the distances for Daka are unbearable to close. Earlier, Daka could press Madrid’s first line of build easily by using a curved run, but when Madrid build with three centre-backs, the width of the field cannot be covered by one player and expect to effectively win the ball back. 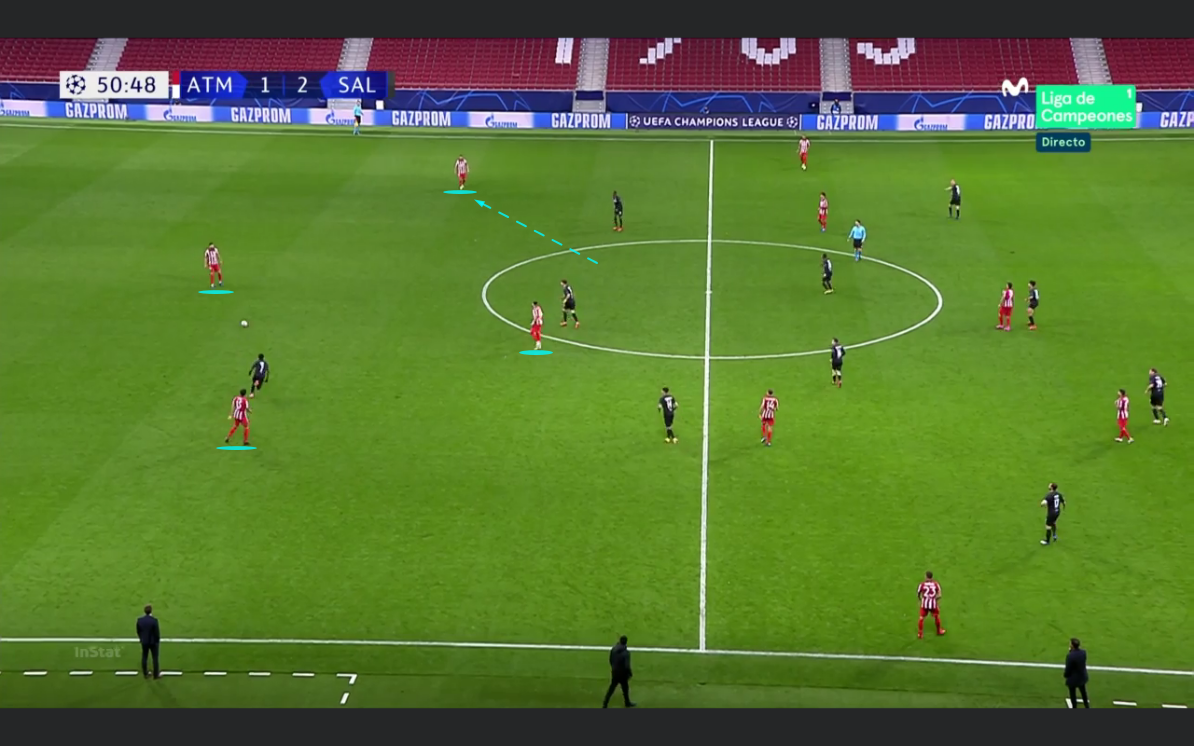 The wingers also struggled as a result and eventually opened up more space centrally because of this move. The situation occurs where the Salzburg wingers cannot close the wide centre-back and the full-back at the same time. Consequently, the passing sequences from outside to inside become a lot easier. In addition, when the winger would stay on the outside to close the passing lanes to the outside, as we can see in the example below, space opens up centrally. With space opening up, more chances were created and eventually, Atletico Madrid turned the game back into their favour. 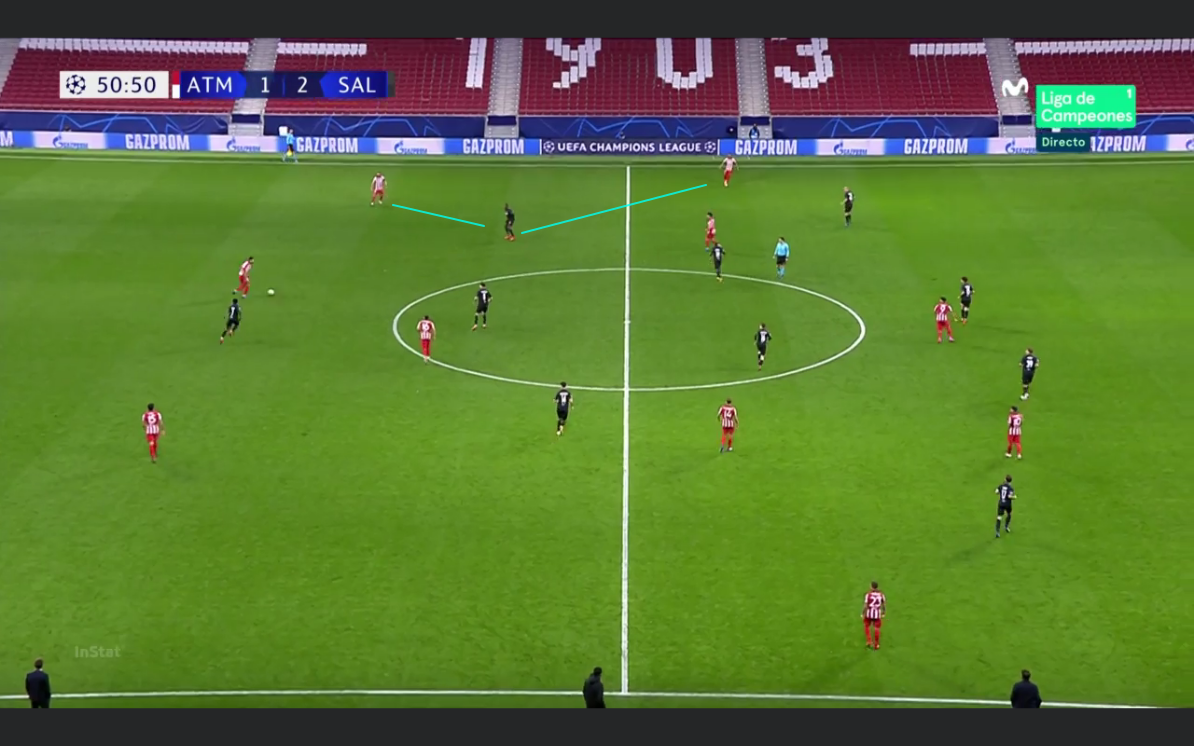 The game between Atletico Madrid and RB Salzburg definitely lived up to its expectations. Atleti won the game by minimal difference but showed some spectacular football at times. On the other hand, Salzburg put in a brave performance where they can surely get some positives out. It’s now onwards and upwards for both teams!