What was going the be the clash between Lionel Messi and Cristiano Ronaldo did not occur. With the Portuguese’s absence, Juventus received Barcelona for week two of the UEFA Champions League. Even though both teams arrived at this game after winning their initial matches, they were surrounded by doubts. Barcelona lost the previous weekend in the Spanish derby against Real Madrid and had only won one of the last four games. Not better was Juventus’s preview, with a draw to Hellas Verona to increase the concerns for Andrea Pirlo.

In this tactical analysis, we will dive into Barcelona’s tactics applied when in possession, with Messi being instrumental again in opening their score. This analysis will also show how Juventus managed to threaten Barcelona’s defence. Finally, we will analyze how Ronald Koeman read Juventus tactics in possession to exploit the spaces left through counter-attacks.

Pirlo deployed a 4-4-2 formation, with Juan Cuadrado playing as a right full-back. He did only two changes from last week’s game in Kyiv. At the back, Merih Demiral replaced Giorgio Chiellini pairing Leonardo Bonucci. The midfield line remained unchanged with Rodrigo Bentancur and Adrien Rabiot as holding midfielders. Federico Chiesa and Dejan Kulusevski took wide positions at the midfield line. The other change was with Paulo Dybala entering supporting Álvaro Morata upfront.

Koeman repeated his 4-2-3-1 formation with a rotation in the personnel. Ronald Araújo replaced the suspended Gerard Piqué, pairing Clément Lenglet at the back. Jordi Alba now feat repeated in the starting lineup in the left with Sergi Roberto doing so in the right. Miralem Pjanić and Frenkie de Jong took the central midfield roles. This time Pedri, Ousmane Dembélé, and Antoine Griezmann came into this game joining Messi upfront.

As expected, the Italian team only pressed when the ball was deep in Barca defensive third. When Barcelona owned the ball in their build-up, Juventus used the front two lines to press high in a 4-2 shape, as shown in the next picture. Barcelona played from the back with a double pivot and the back four. Juventus’ deployed a man-mark, the holding midfielders pressing the pivots and the wide midfielders pressing the full-backs. The front two were in charge of pressing the centre-back and goalkeeper. We can also see from the next picture that Juventus’ second line of the press did so in a flat line. Even though the ball was in the left flank, the weak side midfielder remained man-marking the full-back. At first, this high press created some mistakes in Barcelona’s build-up. Albeit, Juventus’s lack of cover behind the press’s second line allowed Barcelona’s front four to receive skipping the high press with ease. Tucking in the winger and retreating a holding midfield would have improved Juventus’ defensive action. 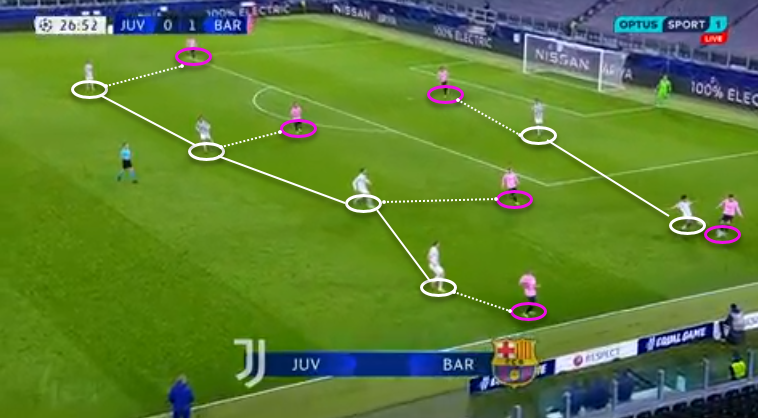 Once Barcelona progressed the ball to the middle third, Juventus retreated in a compact low-block positioning in a 4-4-2. This next image summarises the game, with Barcelona in possession of the ball in the middle third and Juventus reacting to the Spaniard positional play. In possession in the opposite half, Barcelona turned to a back three with Alba taking the left-wing position and Rudi tucking in. They settled in a 3-4-3 with the two pivots centrally and Dembélé and Alba giving width. The front three played in the half-spaces and central channel with freedom, as depicted in the next shot. 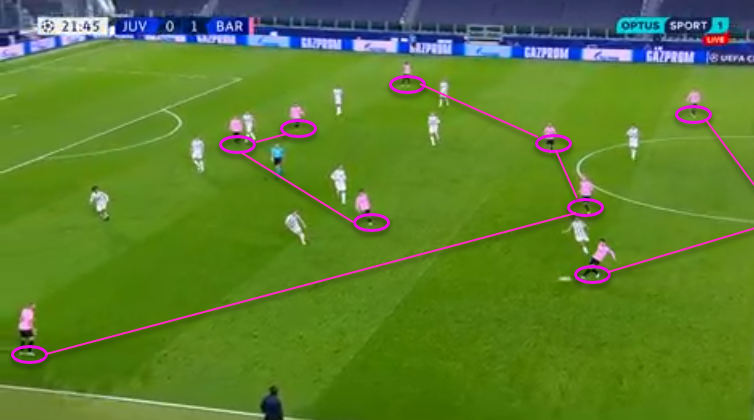 In this positional play, Messi freedoms become instrumental in breaking low compact blocks. The Argentinean took the same positioning in the weekend derby, dropping deep out of the compact-block. We saw him assisting Alba from this position, who assisted Ansu Fati for its goal against Real Madrid. From the same position, he became a threat to Juventus compact block. In the next shot, we can see the start of Barcelona’s first goal. Messi dropped deep to receive the ball out of the defensive block and assisted Dembélé, who isolated on the right side, forced Juventus lines to run towards their goal, and opened the score with a deflected shot. 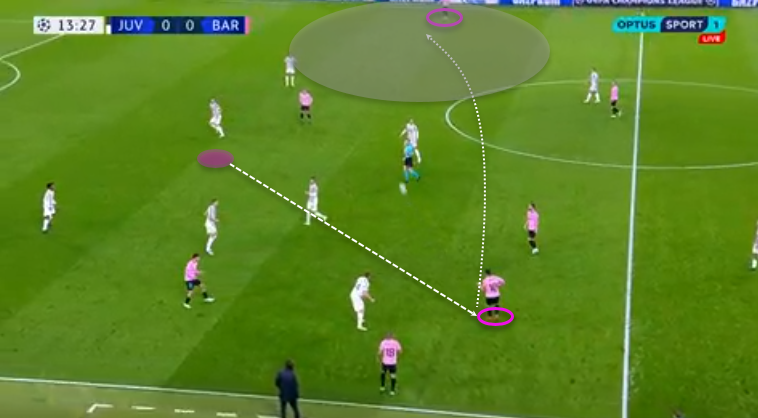 We saw what Messi could do from a deep position if midfield lines maintain their compact block. But the same problems would face the opposition midfield line if they decide to press the Argentinian in that deep position. Rivals will be tempted to mark him with numbers not to be easily outplayed, losing their compact shape. In the next snapshot, we can see Messi’s deep positioning in the central channel. He committed three Juventus players with his run and passed the ball with perfect timing to create a 2v1 on the right flank. Even though they share the ball possession in the game, Barcelona dominated the game in scoring opportunities generating a 2.31 xG. 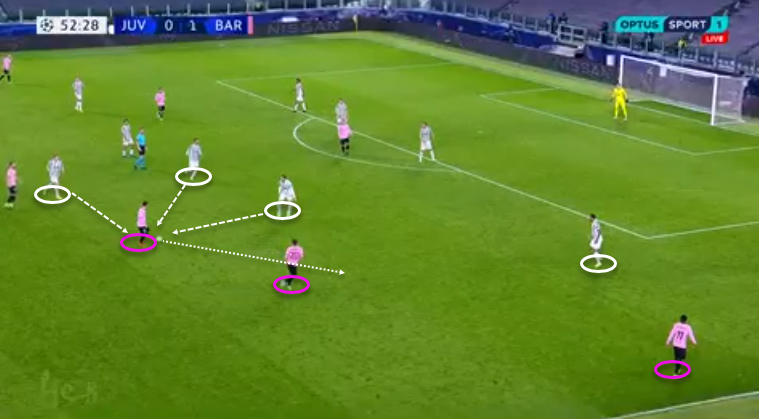 Considering the chances ruled off for slight off-sides positioning, Juventus created scoring opportunities on their possession game. Barcelona did not press aggressively, finishing the game with a 15.2 PPDA, deploying a 4-4-2 formation sitting in a mid-block. Pedri and Dembélé withdraw to the midfield line, with Messi and Griezmann forming the press’s front line. Against this mid-block, Juventus positioned themselves in a 3-4-3, as shown in the next snapshot. Danilo stayed in the left as a wide centre-back, releasing Cuadrado in the right. Kulusevski tucked in joining the front line, with Dybala with more freedom to drop as a number 10 between the front two. 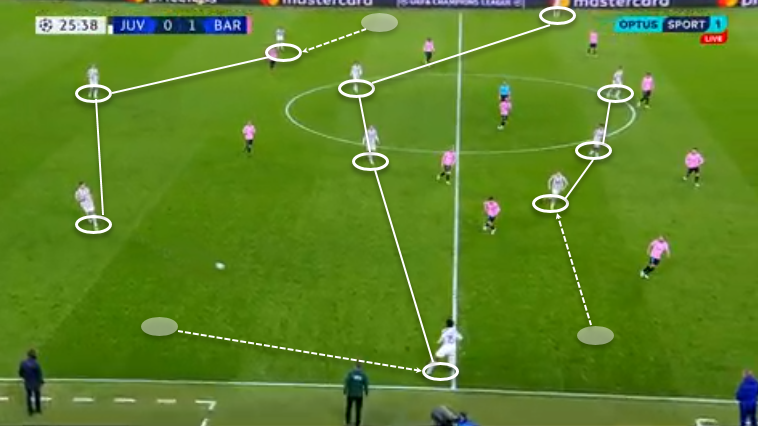 With Kulusevski preferring to play on the right side, and Morata taking a more central position, Juventus ended with an asymmetric shape upfront. This shape resulted in two different ways of attacking, depending on the side. We saw a more positional play on the right side, with Cuadrado and Kulusevski combining, receiving Dybala’s support, as shown in the next picture. This play was one of the three goals ruled out for Morata due to being just off-side. The three players combined, with Cuadrado centring for Morata. 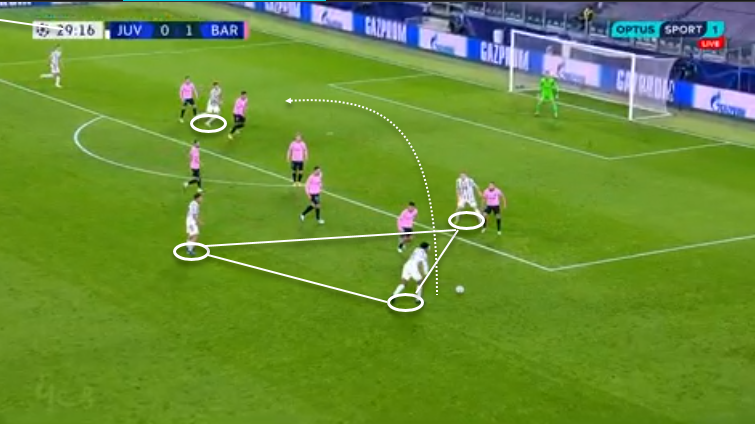 While on the right, Juventus used a more positional play, advancing through combination play and progressive passes; they accessed the left flank through long crosses. The positional play used on the right side forced Barcelona to shift to the ball-side, leaving Chiesa isolated in the far-end. We saw some direct long passes from the centre-backs to access the isolated left-wing or through diagonal passes, as depicted in the next picture. In this play, Demiral combined with Bentancur positioned between the midfield line to connect with Chiesa creating a 1v1. Juventus enjoyed more success from their positional play on the right side than switching the ball to the isolated winger. 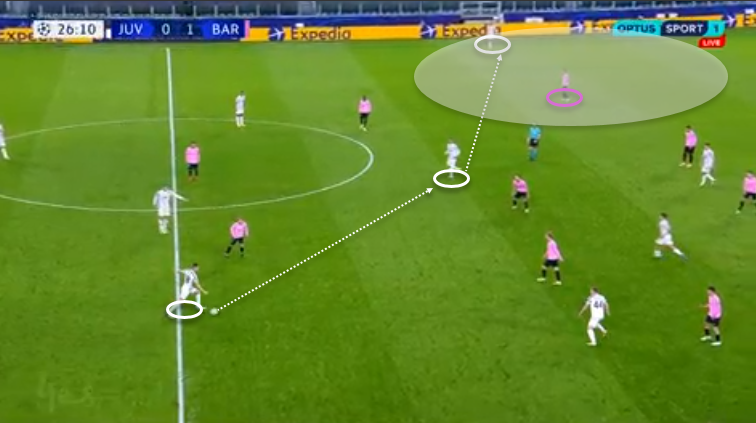 Barcelona read Juventus’ tactics perfectly when in possession counter-attacking with pace to exploit the offensive positioning of Cuadrado and Kulusevski. Koeman chose Pedri on this flank, using his speed to exploit the space left by the Colombian in their transitions. In the next picture, we can see a counter-attack perform by Barcelona, in which Messi collected the ball in the middle third and connected the youngster with space. Even when Cuadrado was well-positioned, Alba got involved in the same flank, exploiting the forward positioning of Kulusevski. Pedri’s forward runs stretched the defensive line, and Alba exploited that gap with pace creating a 2v1. 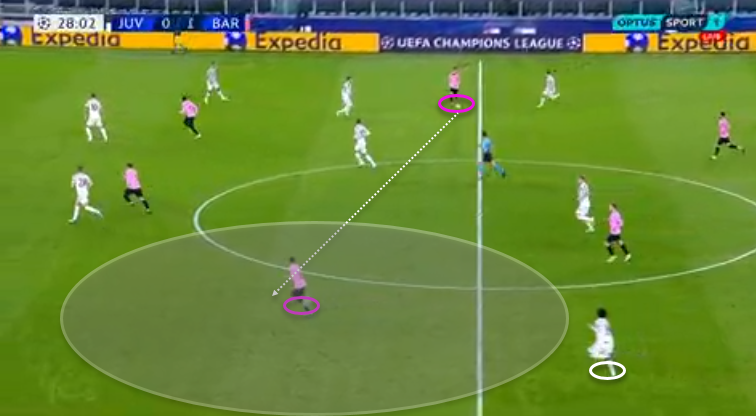 As mentioned above, Barcelona defended in a 4-4-2 formation in a mid-block; these defensive tactics allowed Messi to be centrally positioned in the front line. This position gave Barcelona another weapon when launching their counter-attacks. Messi placed himself between the back three and the holding midfielders, with not assigned mark. Barcelona could easily connect him centrally, as depicted in the next shot. With Juventus retreating, Barcelona’s wingers burst in pace to join the Argentinian, with Griezmann doing the same. Through a similar play after counter-pressing, the Argentinian combine with Dembélé, with Juventus’ defender conceding a penalty to end the game. 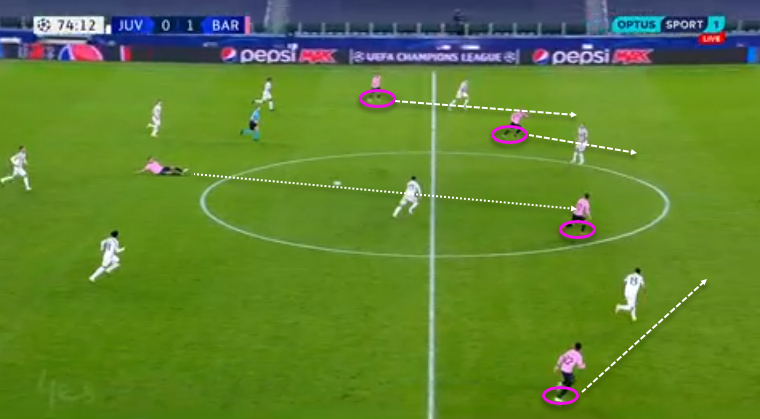 This clash gave some relief to the Spaniard team while deepening the doubts in Pirlo’s team. The positional play that Barcelona is used to pay dividends with Messi dropping deep to create scoring opportunities. A counter-attacking style is something we will get used to in this team with wingers of the likes of Dembélé, Pedri, or Fati.

A different story would have been if Ronaldo had been able to play this clash; even in his absence, Juventus managed to create some decent scoring opportunities. Both teams still need to improve a lot if they want to challenge for the trophy this year.