Matchday seven of the Belgian Pro League saw the first Brugge derby of the season. Former EFL and EPL manager Paul Clement’s Cercle Brugge have historically struggled against their rivals Club Brugge, but they managed to put in a battling performance, despite losing 2-1. While Club Brugge (from now on referred to as just Brugge in this article) have disappointed slightly to start the season, Cercle have played far better than they did during the 2019/20 campaign.

This tactical analysis will look at how Brugge looked to use the width to create space inside for their two creative midfielders. This analysis will also look at how Cercle set up with tactics that looked to take the game to the former champions, rather than just sitting back and trying and play on the counter. Finally, how Brugge were able to win the game because of Cercle’s zonal marking will also be examined. 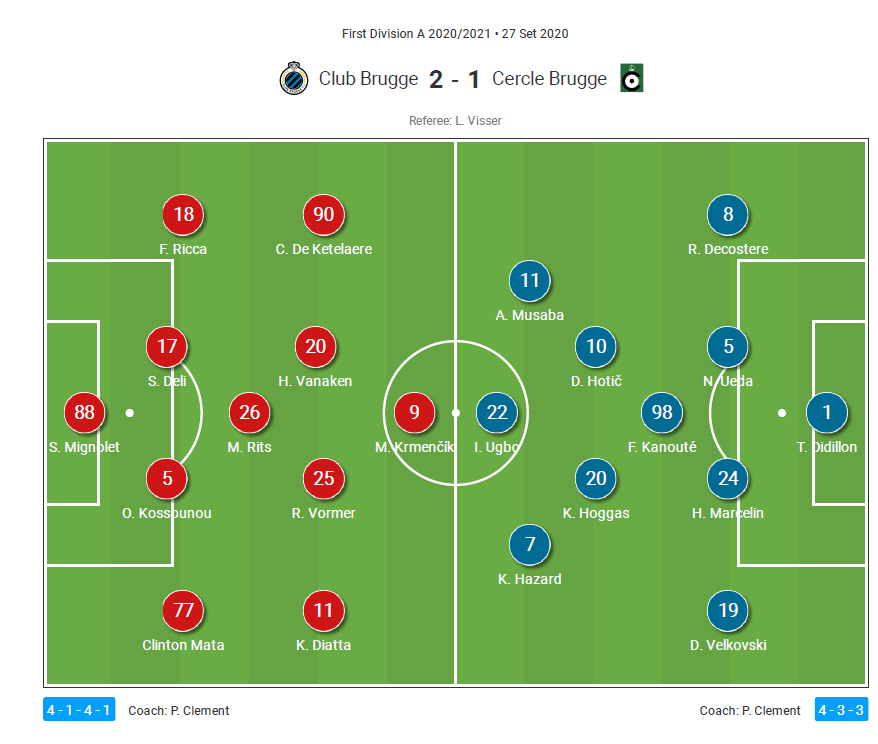 Home side Brugge, themselves managed by Phillipe Clement, went for a 4-1-4-1 formation, with Simon Mignolet in goal. The back four consisted of Clinton Mata at right-back and Frederico Ricca at left-back. Simon Deli partnered Odilon Kossounou in the heart of the defence, while Mats Rits was the holding midfielder, behind the duo of Hans Vanaken and Ruud Vormer. The youthful talent of Krepin Diatta and Charles De Ketelaere were the wide players, while Czech striker Michael Kremencik led the line.

For the other Clement, Cercle lined up in their now usual 4-3-3 formation. Thomas Didilon was the keeper, with Naomichi Ueda and Jean Marcelin as the centre-back pairing. Dimitar Velkovski and Robbe Decostere were the full-backs. The midfield three was made up of Franck Kanoute in the holding role, with Kevin Hoggas and Dino Hotic as the creative outlets. Kylian Hazard and Anthony Musaba were the wide men, looking to support Ike Ugbo as the striker.

From early on in the match, it was clear that Brugge wanted to use the width as often as possible. Diatta and De Ketelaera saw plenty of the ball in the opening stages, with the three central midfielders looking to get the ball into these two players through switches of play if required. With the goalscoring threats they have in Vormer and Vanaken in the central areas, it was clear that the tactic was to create space inside for these players to push up into. Vanaken especially loves to push deep into the opposition’s half to support Kremencik as the lone striker.

It wasn’t just the wingers providing the width. Both Mata and Ricco were encouraged to get forward as well, with the aim of creating more of these half-spaces in which players could operate in. For example, prior to the opening goal, we see how the winger, full-back and midfielder all work in tandem to create space. Mata has pushed forward into the space that Diatta has vacated to pick up the ball. Diatta dropping deep, with Mata pulling wider, has opened a gap for Vormer to move into. 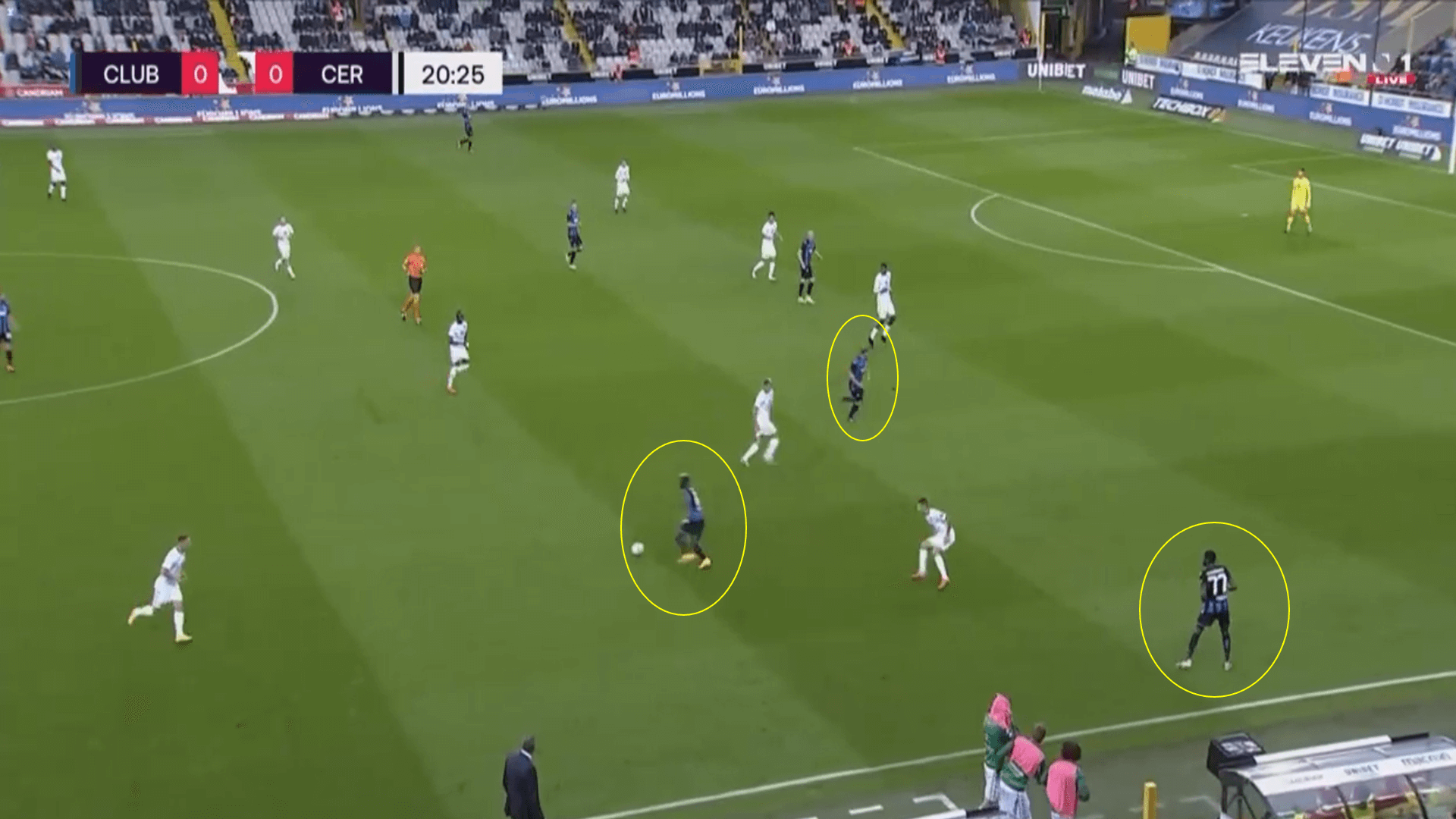 While the opening goal itself came from a counter-attack, these passages of play created plenty of space for Brugge during the match, but they were unable to take advantage of them to add to the score.

Just minutes later, we again see this triangle at work, with Mata wide, Vormer inside and Diatta just behind. Barring a great tackle from the Cercle defender, Brugge would have had a great opportunity with an overload in the box. This happened in similar ways on the opposite flank too, with De Ketelaera, Ricco and Vanaken being the three involved there. 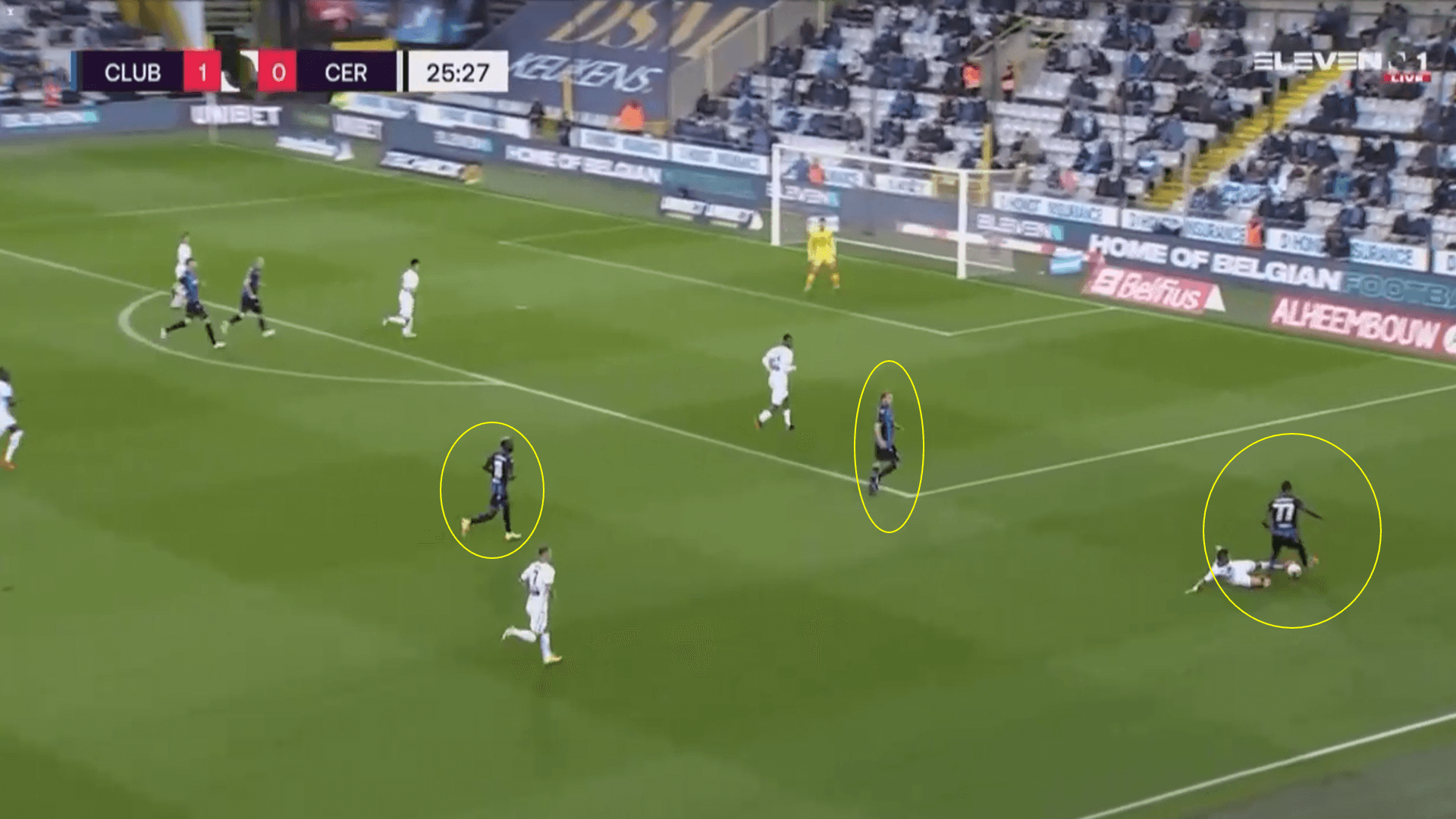 While many teams approach a game against Brugge with all 11 men behind the ball, hoping to play on the counter, Cercle were looking to take the game to their more favoured opponents from the first whistle. They ended the game with 52% of the possession, with an average possession duration of 15 seconds, more than their opponents. While possession is by no means a guarantee of victory, it indicates that Cercle were looking to play their own game, and not just let the home side permanently have the ball.

This was equally impressive when we consider that the home side were looking to press Cercle while they were in possession, especially from the goalkeeper. Club finished with a pressing intensity of 7.8 on average, so for Cercle to complete more passes despite this press again indicates their willingness to try and keep the ball, playing the style of football that they wanted to play.

This desire to play and take the game to their opponents paid off immediately following the start of the second half. Cercle were able to overcome the Club press, as we see how high up the field Vormer is, and even Rits is on the halfway line as the holding player looking to press. 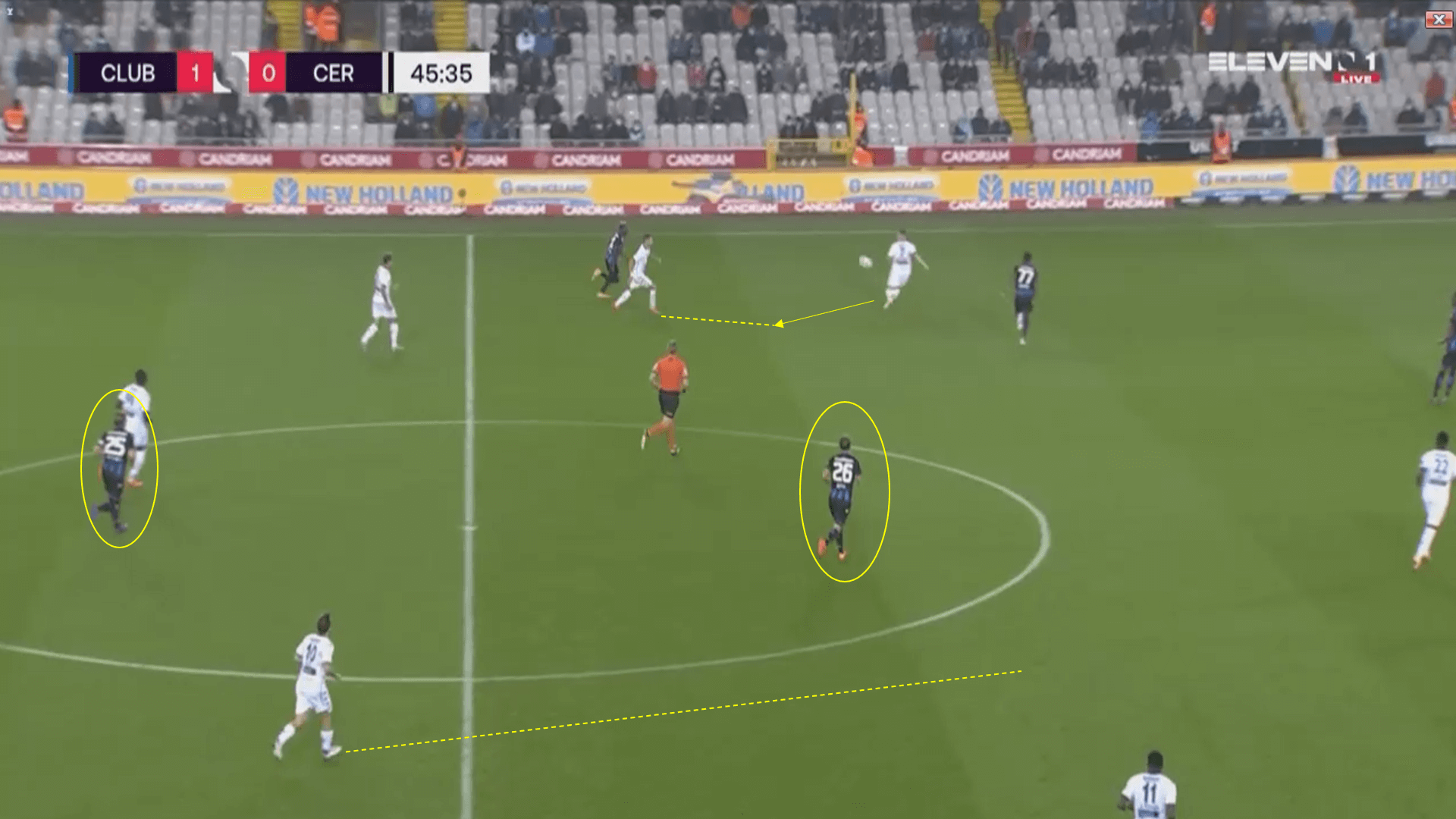 As the play progresses, we see more desire from the central players, with Hotic, having started deeper to help play out from the back, moving into a more dangerous attacking area to create an overload on the right-hand side. By playing two more attack-minded players in the central areas in Hotic and Hoggas, Clement got greater composure in these areas, as well as a desire to drive the ball forward. Hoggas has the ability on the ball to take Rits on, and then take him out of the game with his dribbling. 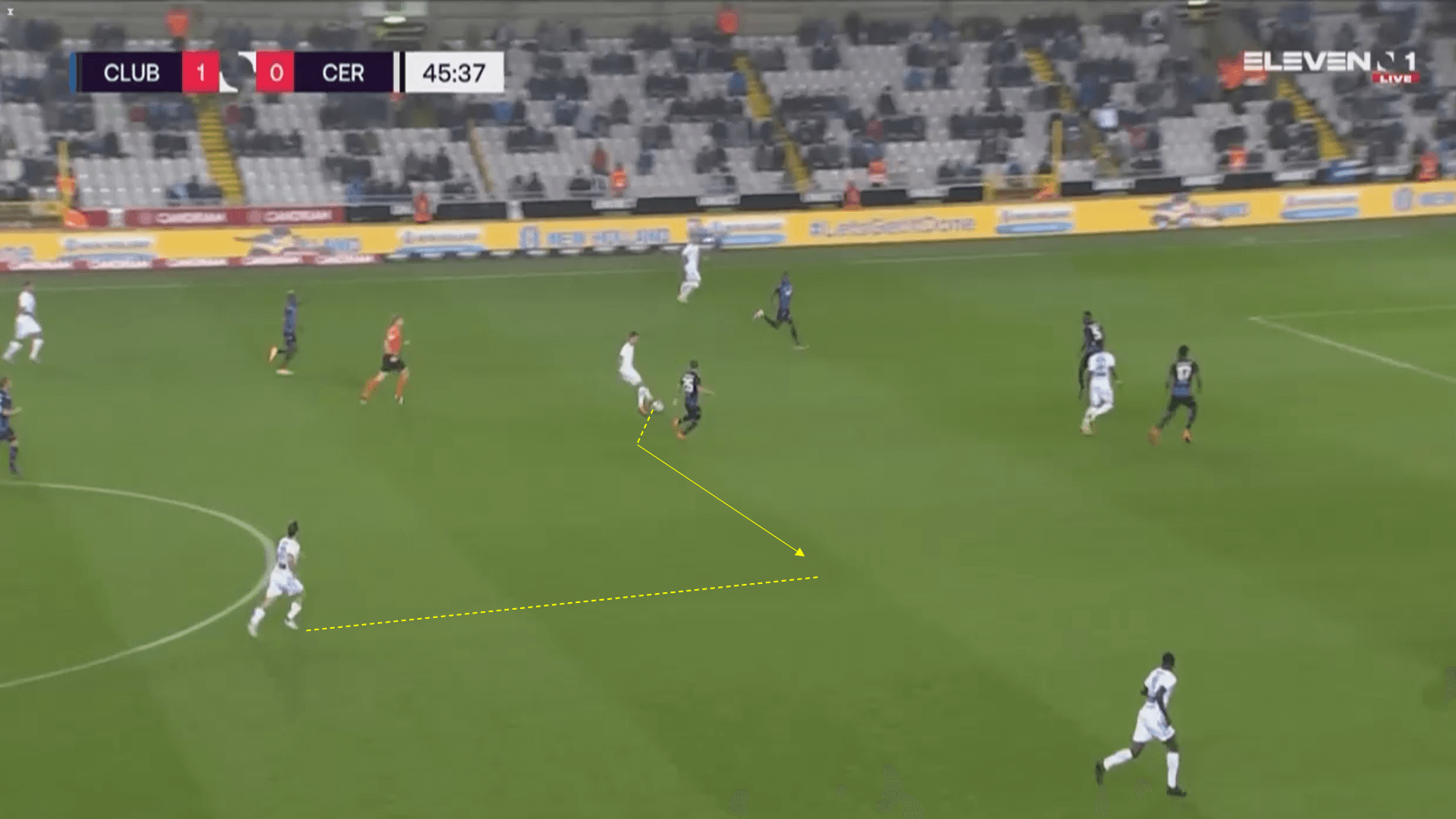 Another advantage of these attack-minded players is the ability to spot a pass. Hotic splits the defenders to find the run of Musaba, who opens his account for his new side. What shouldn’t be understated either is the run of the full-back Decostere, who is looking to join the attack. If Cercle had set up to counter, it is unlikely he joins the attack. While he may not have made it there in time to play a major part, it still highlights the intent of Cercle to go forward as a team. 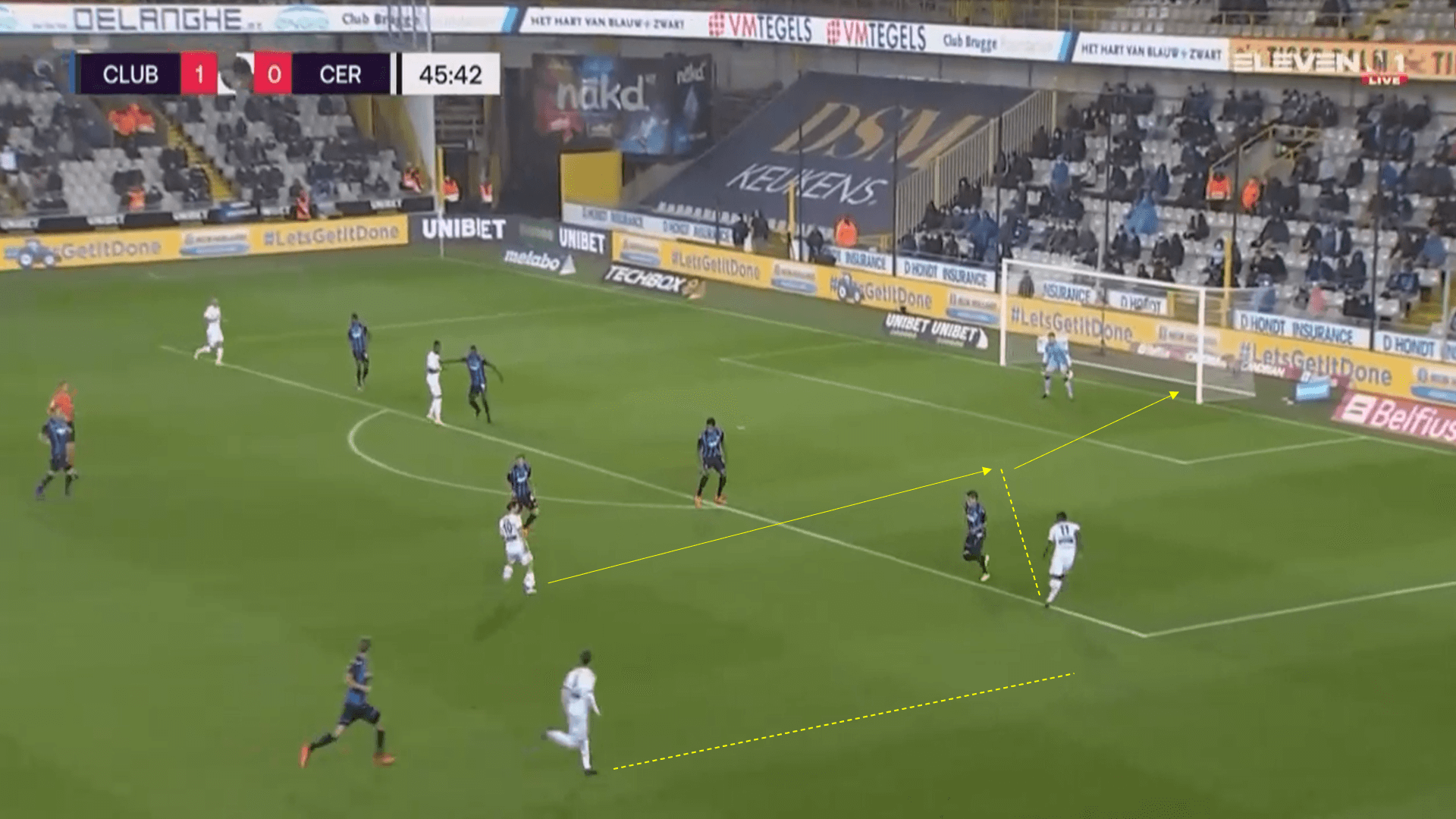 While they only managed the one goal, Cercle were certainly hard done by when, later in the game, in a similar position, Musaba appeared to be fouled in the box. From the initial and subsequent viewings, it looked like a penalty should have been awarded. However, VAR did not rule in their favour. Getting the game back to 2-2 would have certainly rewarded their endeavour.

Zonal marking from corners is a contentious issue. There are probably more critics of the tactic than there are those who believe it to be effective. In the end, it was zonal marking from a corner that cost Cercle the derby. We see the zonal areas here, with no one helping the goalkeeper to keep the player off him. There are seven Cercle players inside the central part of the penalty area, against five Brugge players; four if we consider that the disruptor on the keeper is unlikely to challenge for the header. 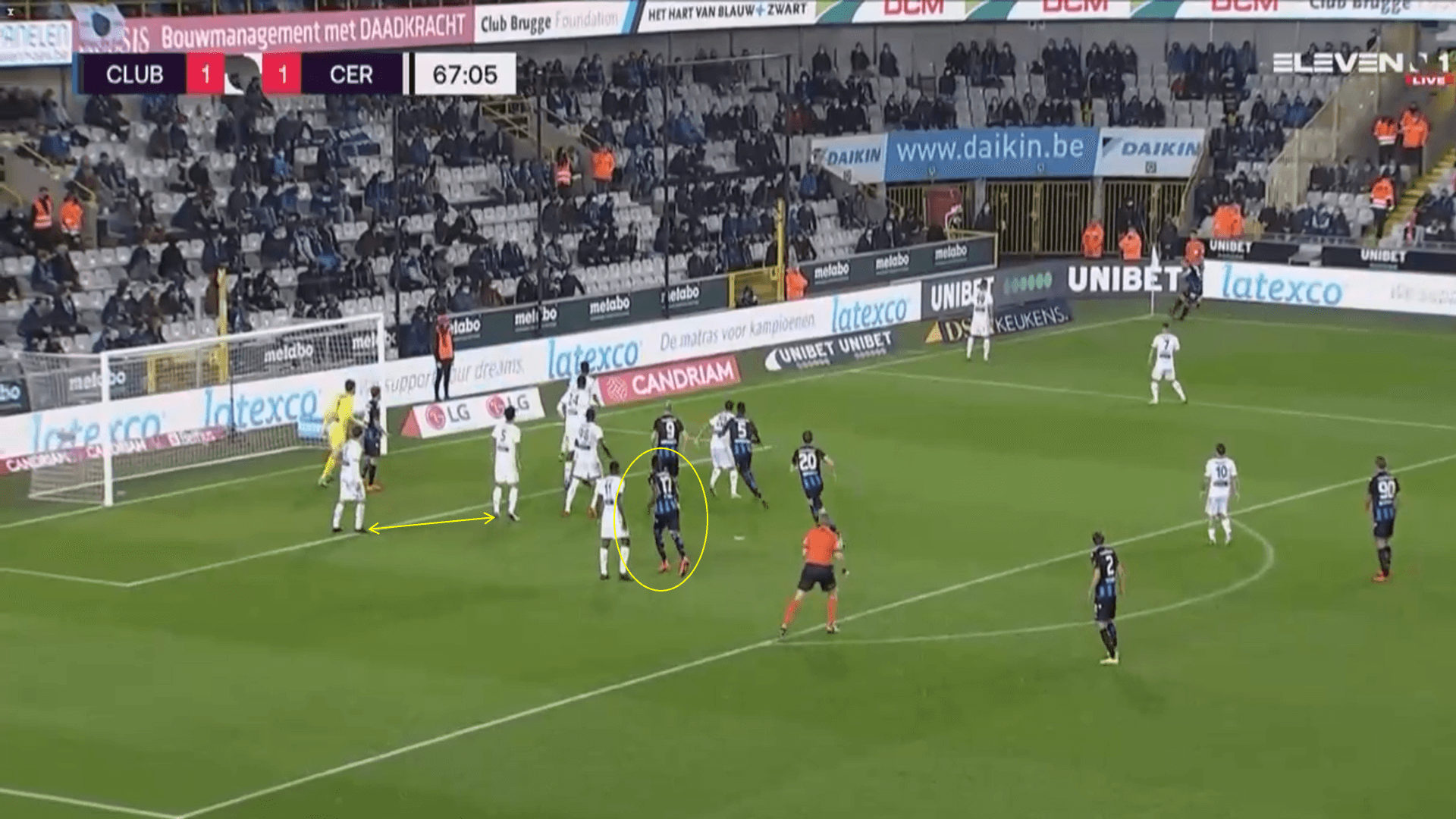 Of these, Deli is one of the more dangerous players, but, as the above image indicates, no Cercle player appears to know where he is. Furthermore, there is a gap between the back two defenders where the home side’s centre half appears to be going. It is Deli who ends up scoring the decisive goal, despite being outnumbered by two Cercle players.

One of the problems with zonal marking is that it doesn’t allow for momentum to be built in order to attack the ball. Deli is attacking the ball, having made a run from just past the penalty spot, whereas the Cercle defenders are trying to win the aerial duel from a static position. Without matching up man-to-man, they ended up allowing Deli to be challenged by the smaller Decostere, who had little chance of beating the centre-back to the header. 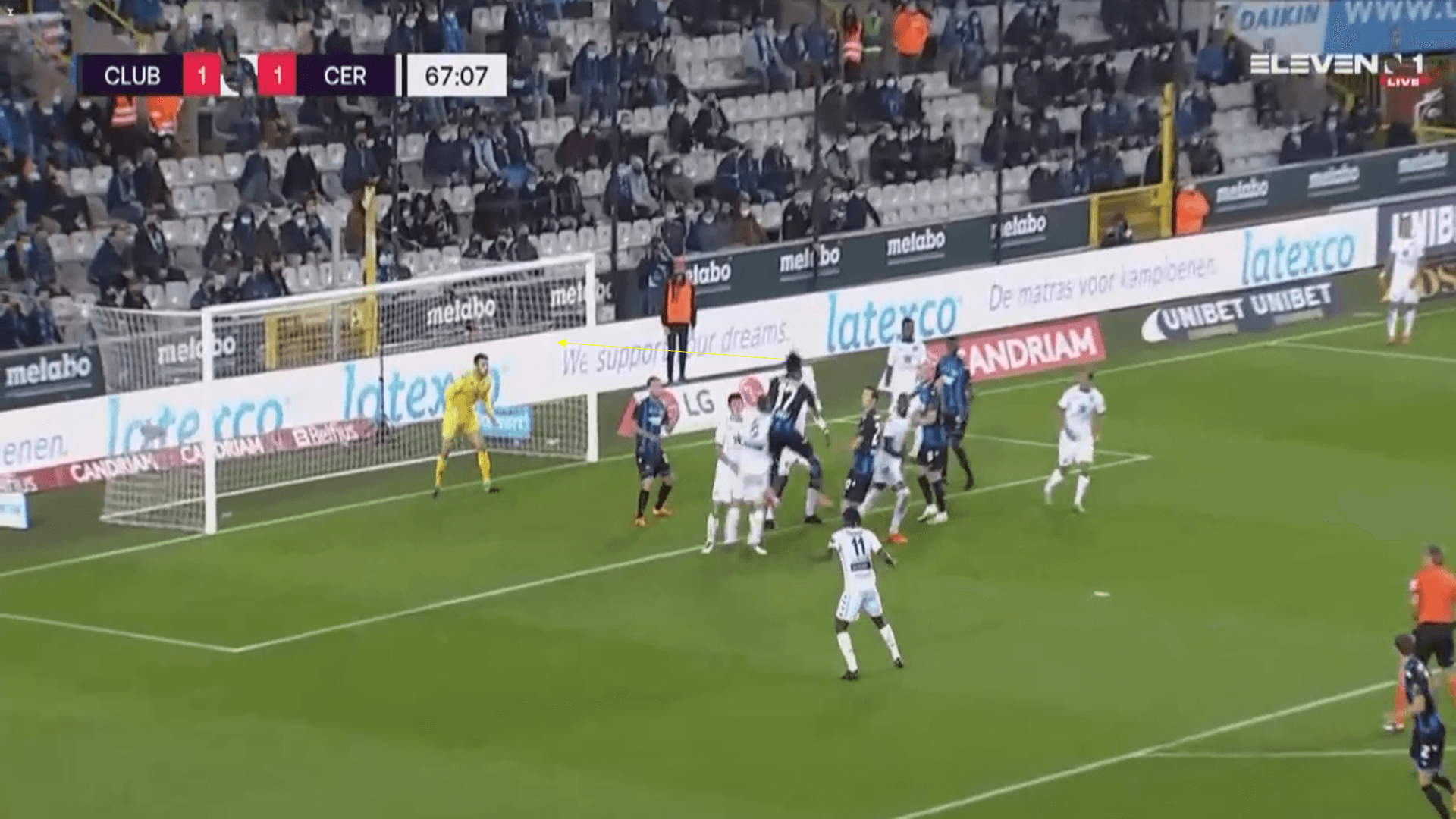 The end result is that Cercle lose an aerial battle, despite having more players in the box. It will be interesting to see if they continue to go with zonal marking in the future, or if this experience will force them into going for a man-to-man tactic.

The first Brugge derby of the season was certainly an interesting affair and indicated how much better Cercle Brugge have been this season compared to previous ones. However, it was still the reigning champions Club Brugge who were able to take all three points, as their ability to stretch the play put plenty of pressure on the away side’s defence. Despite this, Cercle looked to play, and it was refreshing to see them approach the game looking to get on the front foot. In the end, it was zonal marking from a set-piece which cost them.