On Sunday, Hoffenheim shocked the world as they beat reigning Bundesliga champions Bayern Munich 4-1 at home. Even the most ardent of Hoffenheim fans wouldn’t have expected such a result, and Bayern Munich’s rivals across the globe will have watched this fixture with intrigue as Hoffenheim made the side that looked so dominant in the Champions League only one month ago, seem positively pedestrian.

Admittedly there was the absence of Robert Lewandowski from the starting line-up, and, of course, you could argue (although Bayern  fans may well disagree), that with the departure of Thiago to Liverpool they are without their heartbeat from last season, and there may well be some growing pains.

A glance at the result and the xG from this game, which suggested Hoffenheim deserved their victory, and some Bayern fans could be forgiven for already reaching for the panic button. However, without trying to put you the reader off of reading this tactical analysis of the events of this game, it was a resolute Hoffenheim defence (not quite in the shape of a bus, but certainly in the form of the most cautious of low blocks), mixed with a cataclysm of individual mistakes and ghastly defending from the German champions that led to this result.

Hoffenheim scored twice early on, the first a well-worked corner pinning Bayern’s defence inside their own six-yard box, before being glanced home by Ermin Bičakčić. The second, however, came from a bizarre mistake from Benjamin Pavard who seemed to pull out of a challenge, only to toe a pass behind his own defence into the path of an offside Mu’nas Dabbur, who gratefully turned and drove forward before slotting the ball past Manuel Neuer. Bayern struck back with a terrific strike from outside the box from Joshua Kimmich, before an Andrej Kramarić brace sealed the points for the hosts.

This analysis will highlight the tactics used in this game, predominantly by Hoffenheim, to give the home side the unlikeliest of victories.

In what might have been a 3-5-2 in any other game was very much a 5-3-2 in this fixture, as Hoffenheim had less than 30% of possession and spent the majority of the game defending deep inside their own half. As such this pinned back Pavel Kadeřábek and Kevin Akpoguma in the wing-back roles, alongside their back three of Bičakčić, Kevin Vogt and Stefan Posch. Dennis Geiger, Diadie Samassekou and Christoph Baumgartner played as a midfield trio, whilst Kramarić and Dabbur were partners up front.

For Bayern, Pavard, Jerome Boateng, David Alaba, and Alphonso Davies played in the back line, whilst Kimmich and Corentin Tolisso acted as a double pivot in midfield, behind Thomas Müller. Either side of Müller was Leroy Sané and Serge Gnabry, whilst Joshua Zirkzee was given the start ahead of Lewandowski as a lone striker. 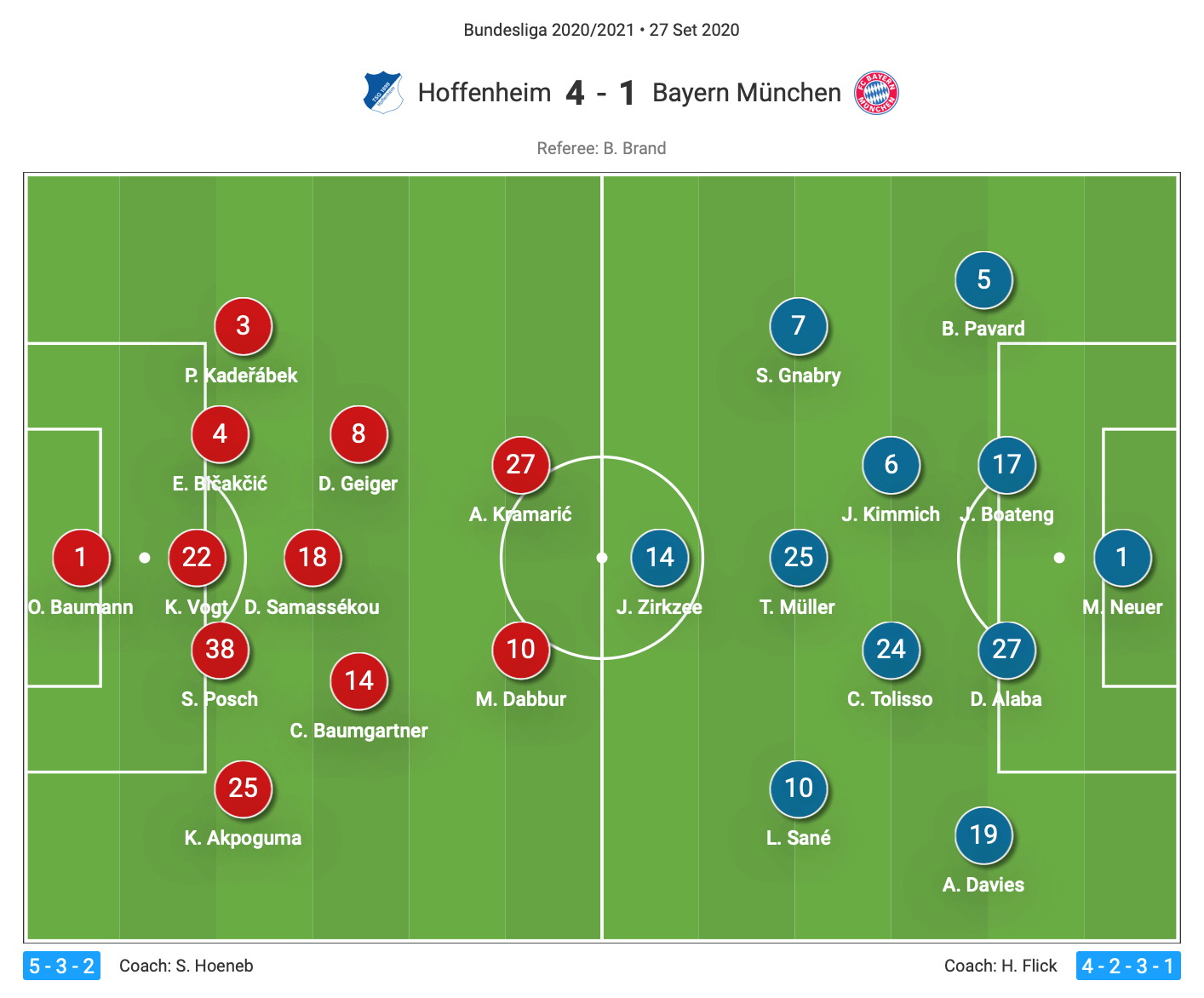 An appalling display of defending

It was a day to forget for Bayern’s defence, with Boateng and Pavard, in particular, looking lost at sea.

Hoffenheim had just 28% of possession over the course of the game, and incredibly 23.3% of their passes were long passes. Bayern pressed high, with a PPDA of 4.69 and the home team struggled to engage in long periods of possession.

If we look at their pass map below, we can see how limited Hoffenheim’s possession was. Nevertheless, they managed to get 18 shots on goal (five more than Bayern), and seven shots on target (six more than Bayern), finishing the game with a 2.85 xG compared to Bayern’s 1.3. 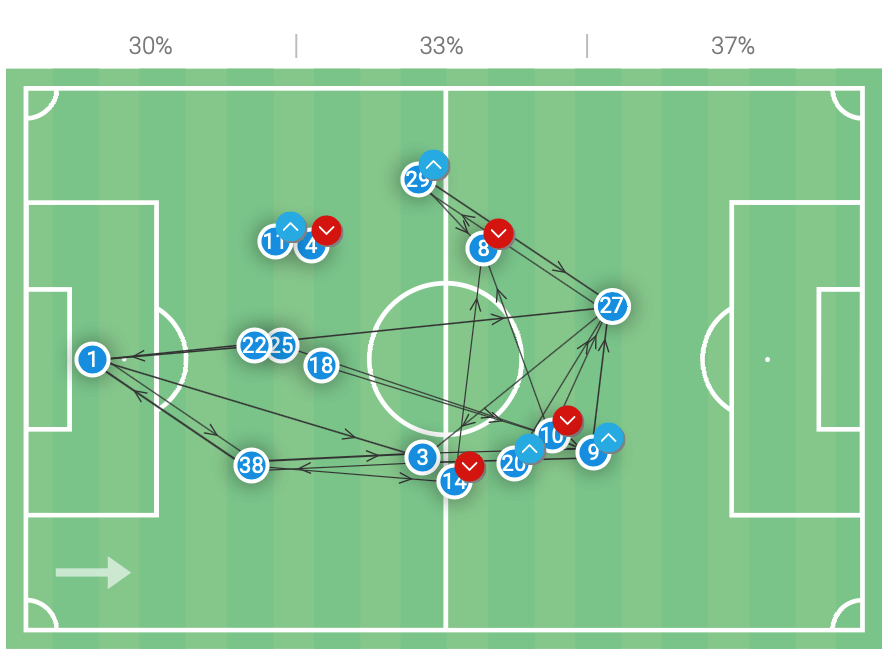 The lack of organisation in Bayern’s defence was evident throughout the game. There appeared to be no one taking control in the backline, whilst clearly, there was little communication too, which was summed up early in the first half as both Boateng and Kimmich went for the same interception, but then neither claimed the ball, allowing Baumgartner to simply pick up the ball himself and slide in Dabbur, who should have made it 3-1 from such close proximity to goal. 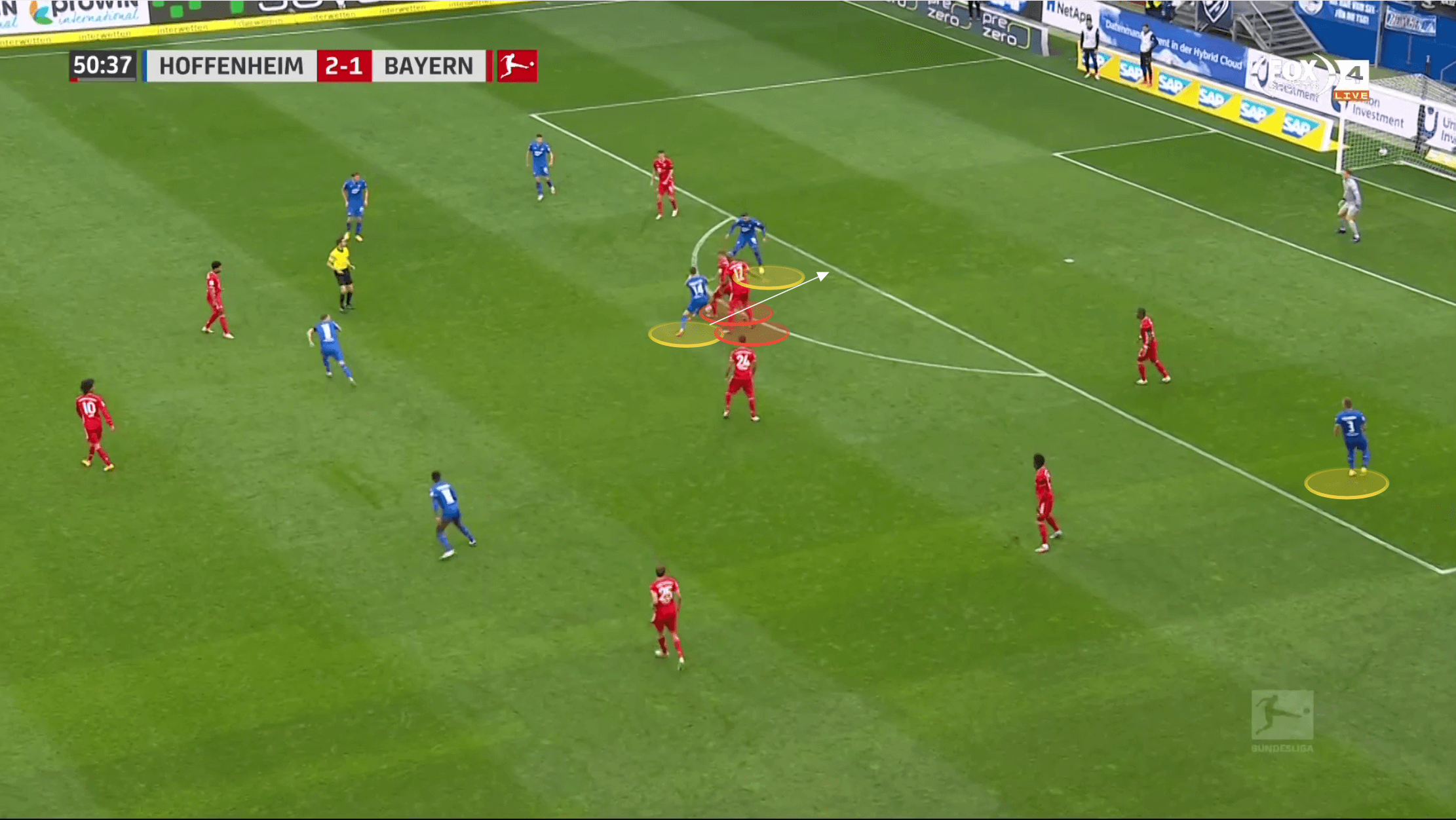 The space between the defence was an issue too, and Hoffenheim’s forwards consistently found pockets of space in the Bayern backline. Davies was often pulled too far forward, and this led to Alaba frequently dropping behind to cover. Yet Boateng and Pavard wouldn’t shift over the right amount in response to this and either Boateng was too close to Alaba but too far from his right-back, or he was too close to Pavard but left huge space between himself and Alaba.

This came to a head for the third goal for Hoffenheim, as Davies lost the aerial duel, and Alaba dropped to cover. 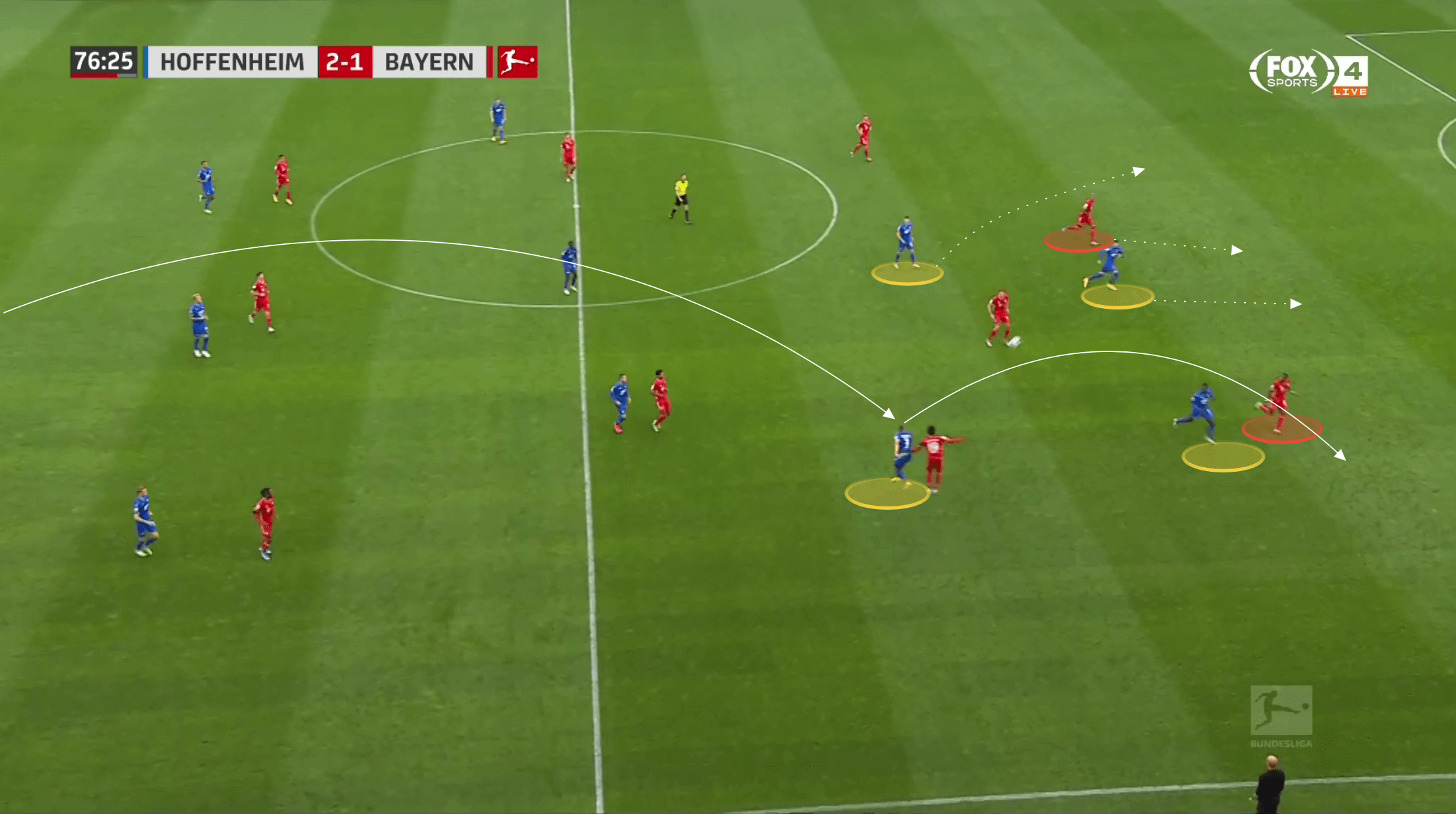 However, Boateng dropped too far over, as we can see in the image below, and it left Kramarić free in acres of space between Boateng and Pavard, to receive the pass across goal and finish from close range. 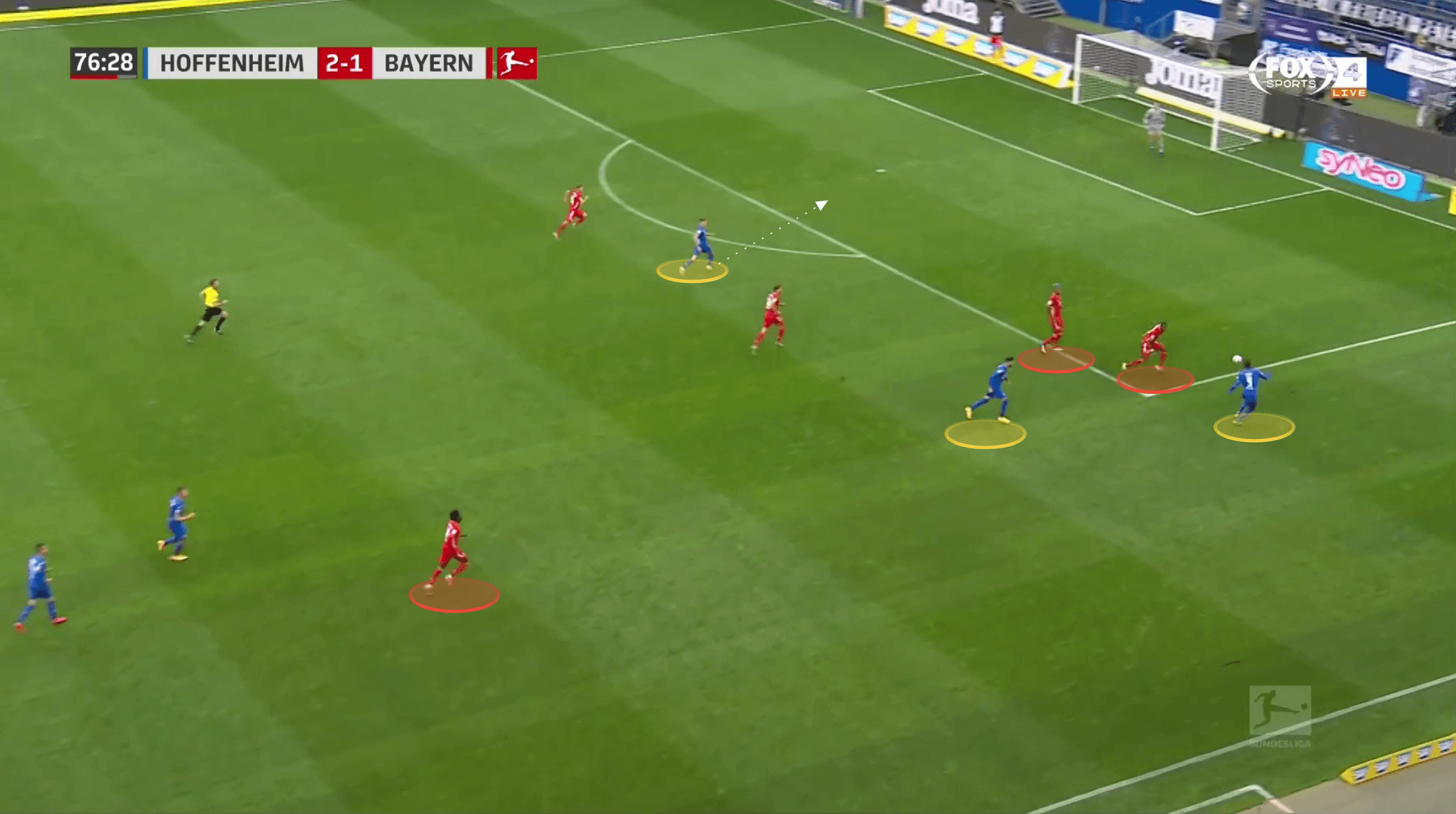 In the first half, Hoffenheim were able to catch Bayern’s defence flat, and pierce their backline with through passes into the space behind their high line. Below we can see that Boateng is out of shape once again with Kimmich dropping into the centre-back position. Nevertheless, Baumgartner is able to shift in behind from an angle to latch onto a simple, flat through pass. 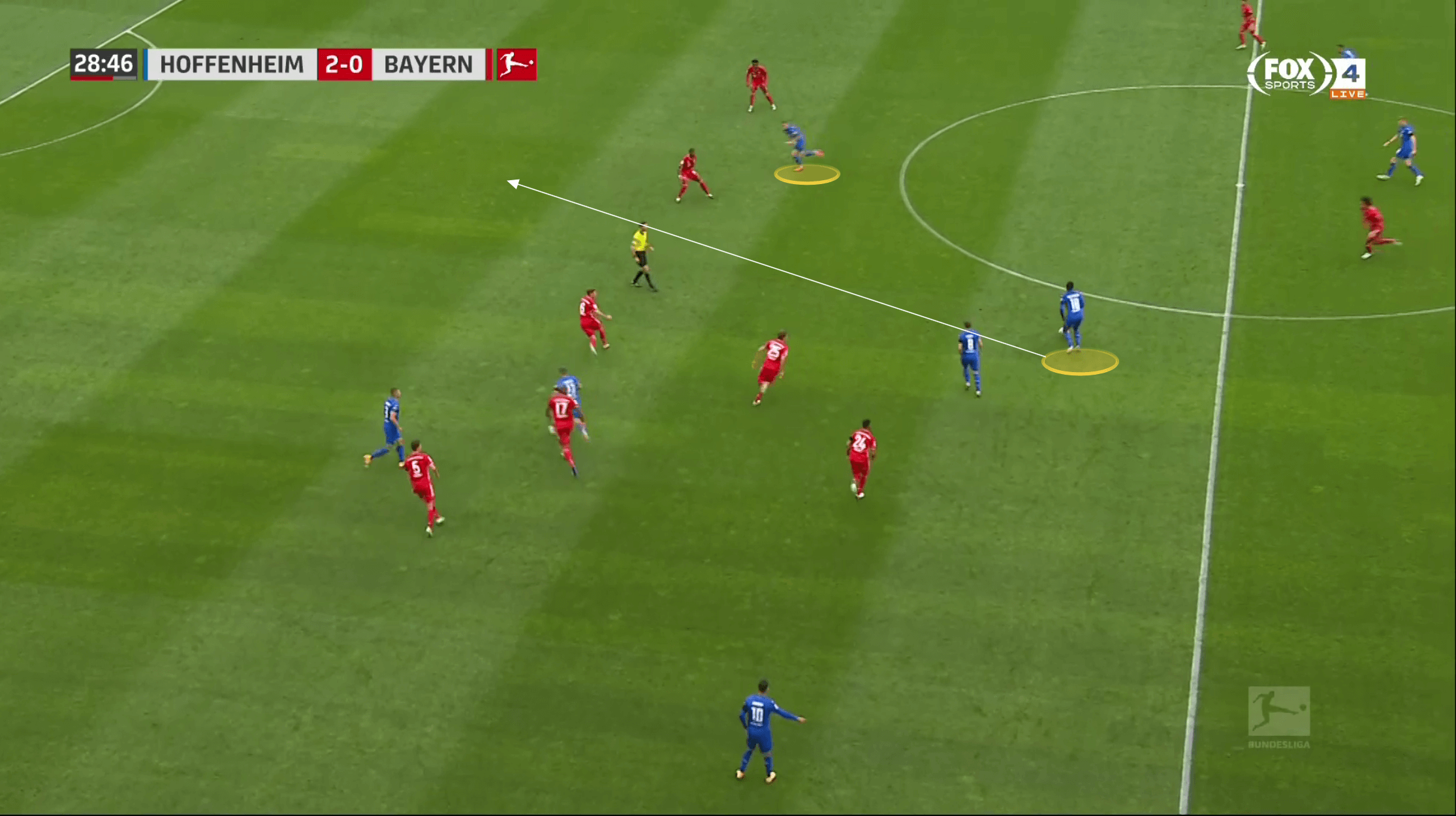 For all of Bayern’s defensive woes, Hoffenheim have to be commended for their disciplined defensive shape that they maintained throughout the entirety of the game.

As mentioned in the line-ups section of this analysis, Hoffenheim played with a back five. Their midfield three stayed narrow, and their wing-backs would push forward to press either side of them should they need to do so. 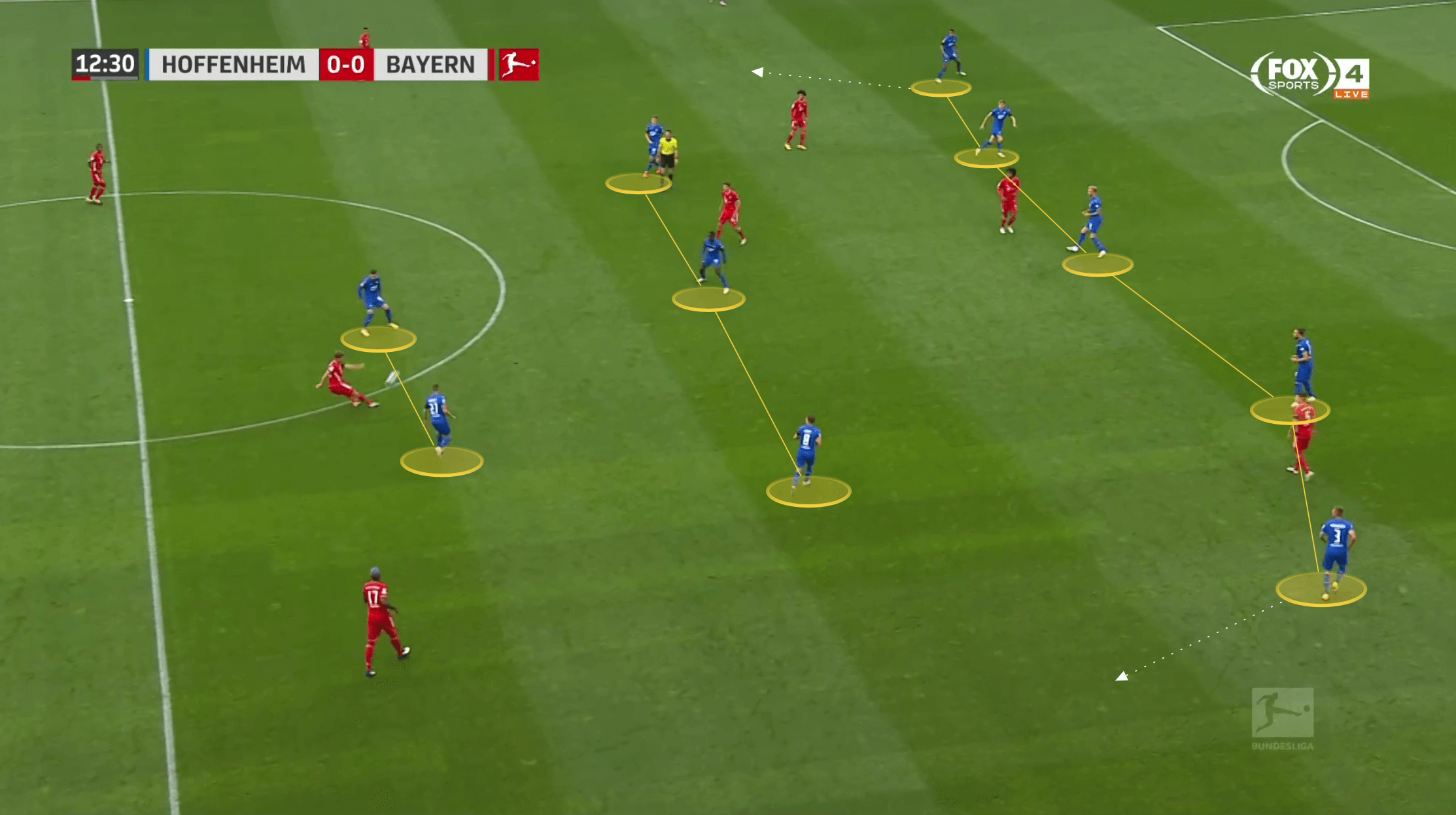 They were given the license to push way past their midfield three and support the front two so long as the central midfielders were able to remain in the central channel. Kadeřábek was bolder in his approach with Pavard seen as less of a threat in possession as Davies, and therefore, Hoffenheim looked to press him early in order to try and force a mistake. Whereas Davies could easily have taken a big touch past his marker in this instance, Pavard doesn’t have the pace to do this, and Hoffenheim looked to unsettle him in possession for this very reason. 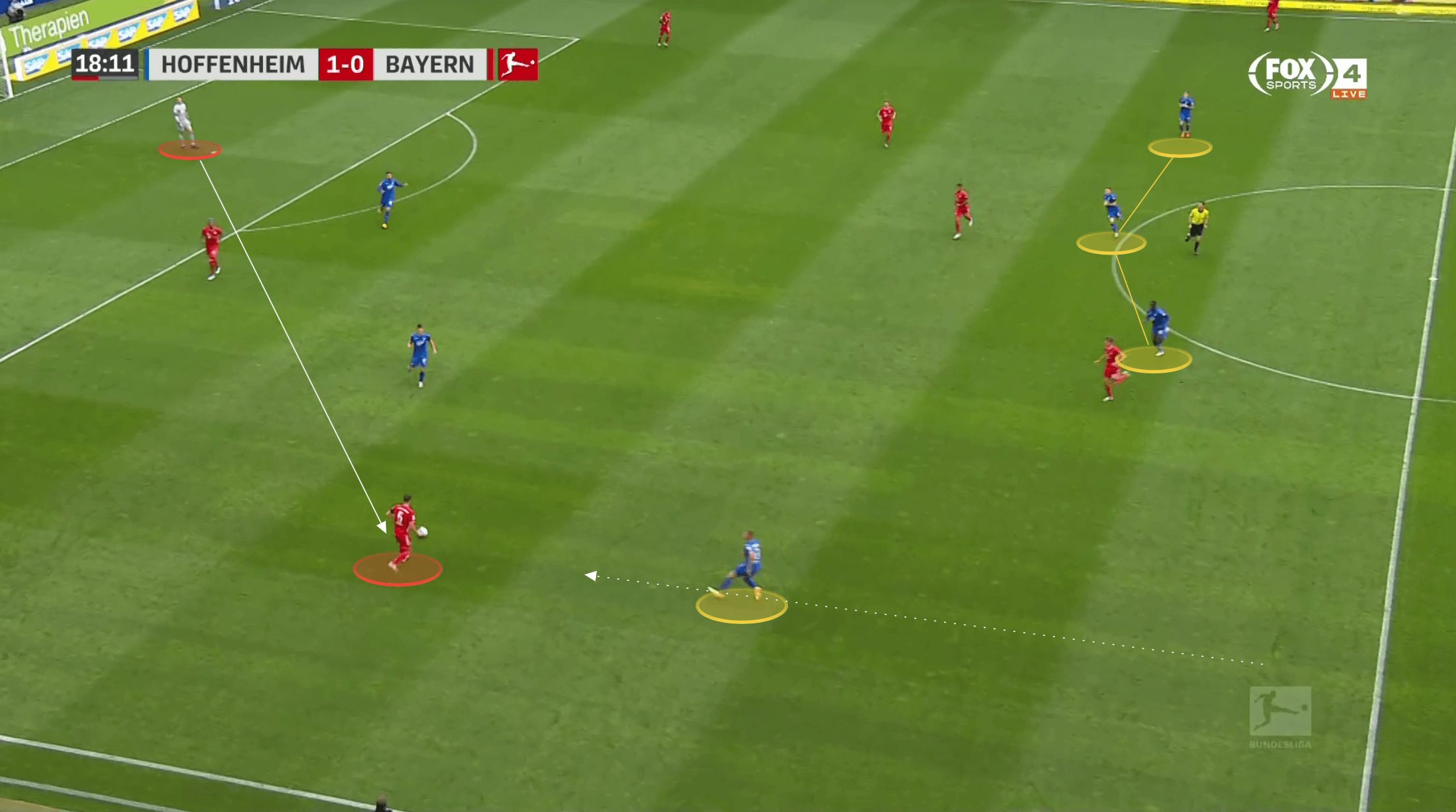 Both wing-backs could be aggressive in pushing out towards the flank, with Hoffenheim looking to prevent the likes of Gnabry, Sané and Davies from getting space to drive forward on the wings. To ensure their wing-backs could engage these players, Samassekou would often drop into the backline to ensure they had plenty of players central to deal with the threat of Müller and Zirkzee in the central channel. 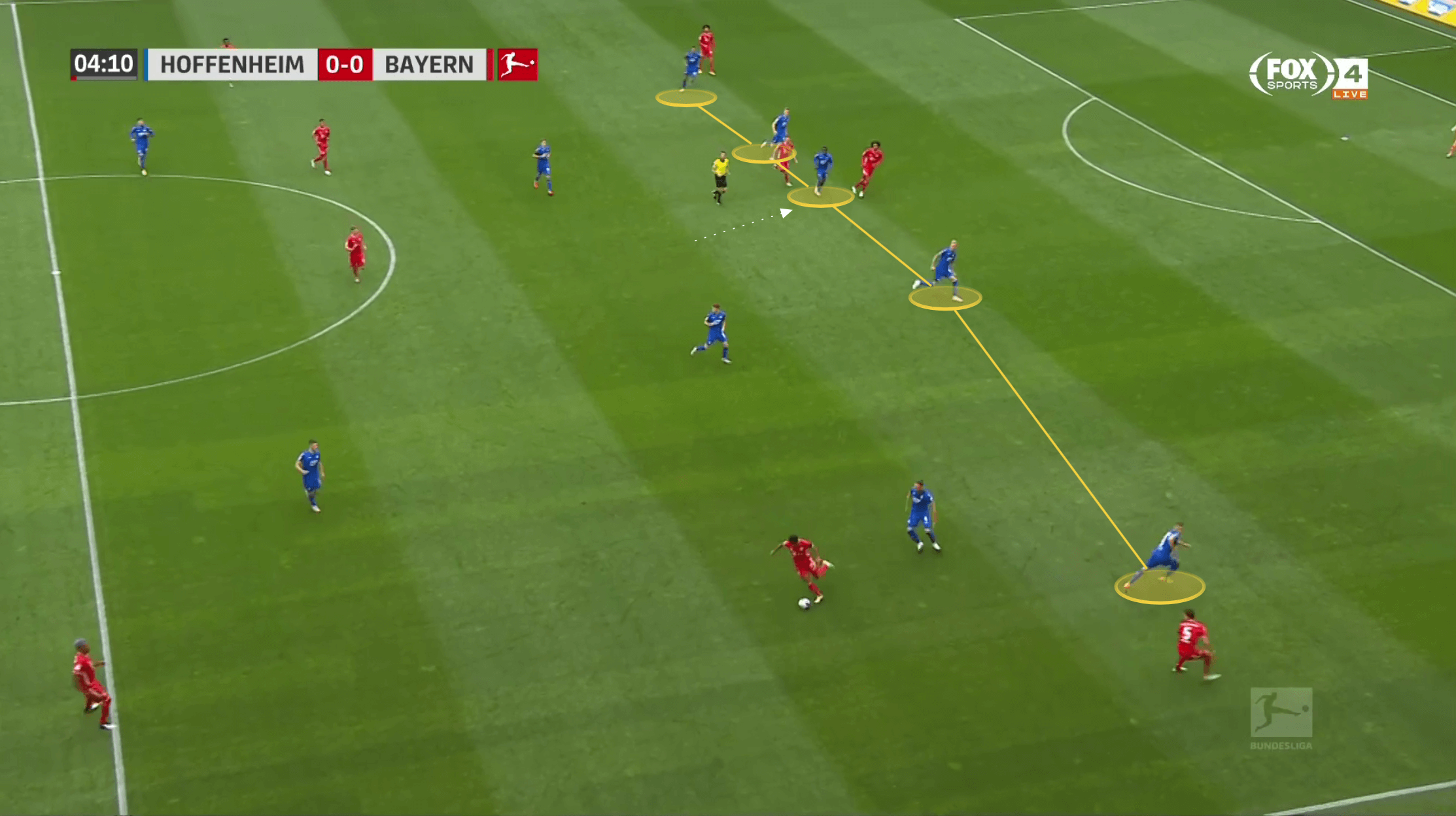 In fact, Hoffenheim did a terrific job of maintaining plenty of numbers in the central channel too.

We can see just how many players they have in this channel in the example below, but specifically, their three central-midfielders were so quick to press in this space, preventing Bayern’s players from getting any time to settle in possession here. 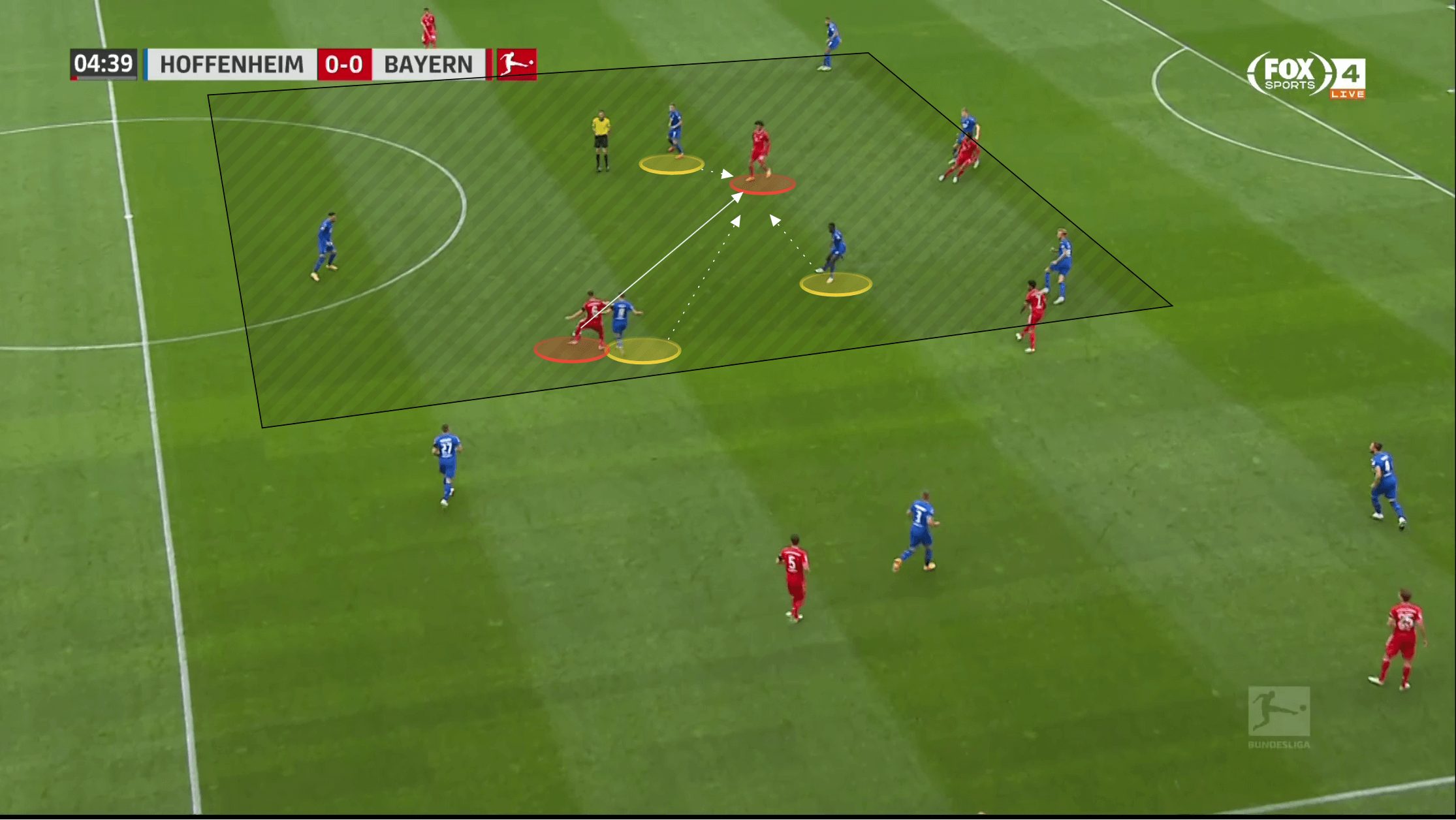 Due to their vertical compactness as a team unit, as soon as Hoffenheim won back possession in this space, they were able to quickly and effectively push the ball forward, away from trouble, and begin their counter-attack. Of their five registered counter-attacks in the game, they managed to get three shots away on goal, proving they were very effective with the method of play. 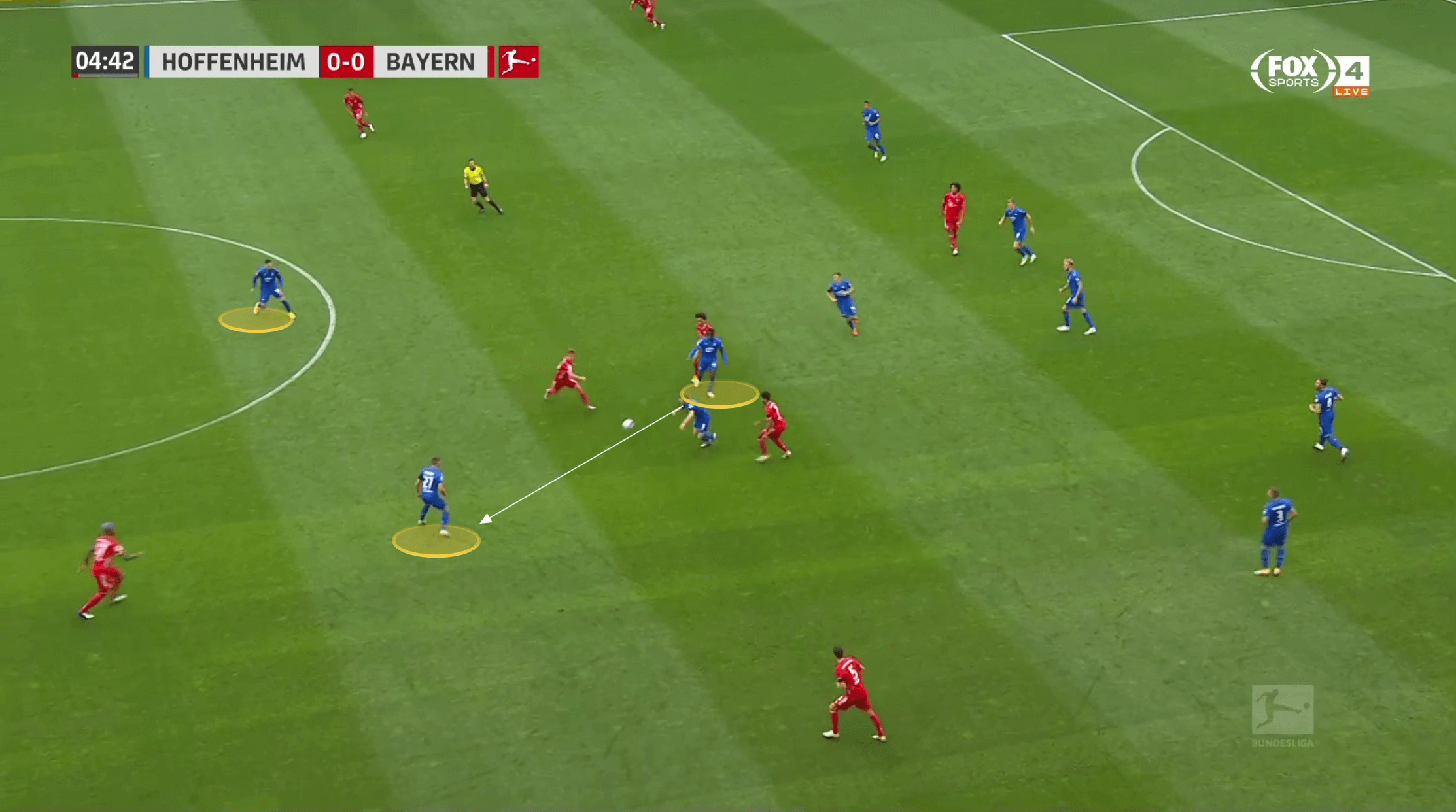 Due to the numbers they had back, Hoffenheim’s back three were able to be a bit more aggressive in pushing up out of their backline, particularly if this meant preventing Zirkzee from acting as a target for Bayern. Hoffenheim were able to prevent him from getting in possession on plenty of occasions and for all of their possession, Bayern struggled without an effective figurehead in attack.

Hoffenheim potentially came out in the second half with a touch of complacency, because until they scored the third, Bayern were beginning to look like they were going to take control of the game and turn it around.  Where in the first half, Bayern had struggled to get good possession in the central channel or half-spaces, they immediately managed to bring Hoffenheim’s press forward with both their first and second line of press coming higher in the opening moments of the second half than it had for the entirety of the first half. As a result, Bayern began to find passage past the Hoffenheim press, and they began to play through the midfield. 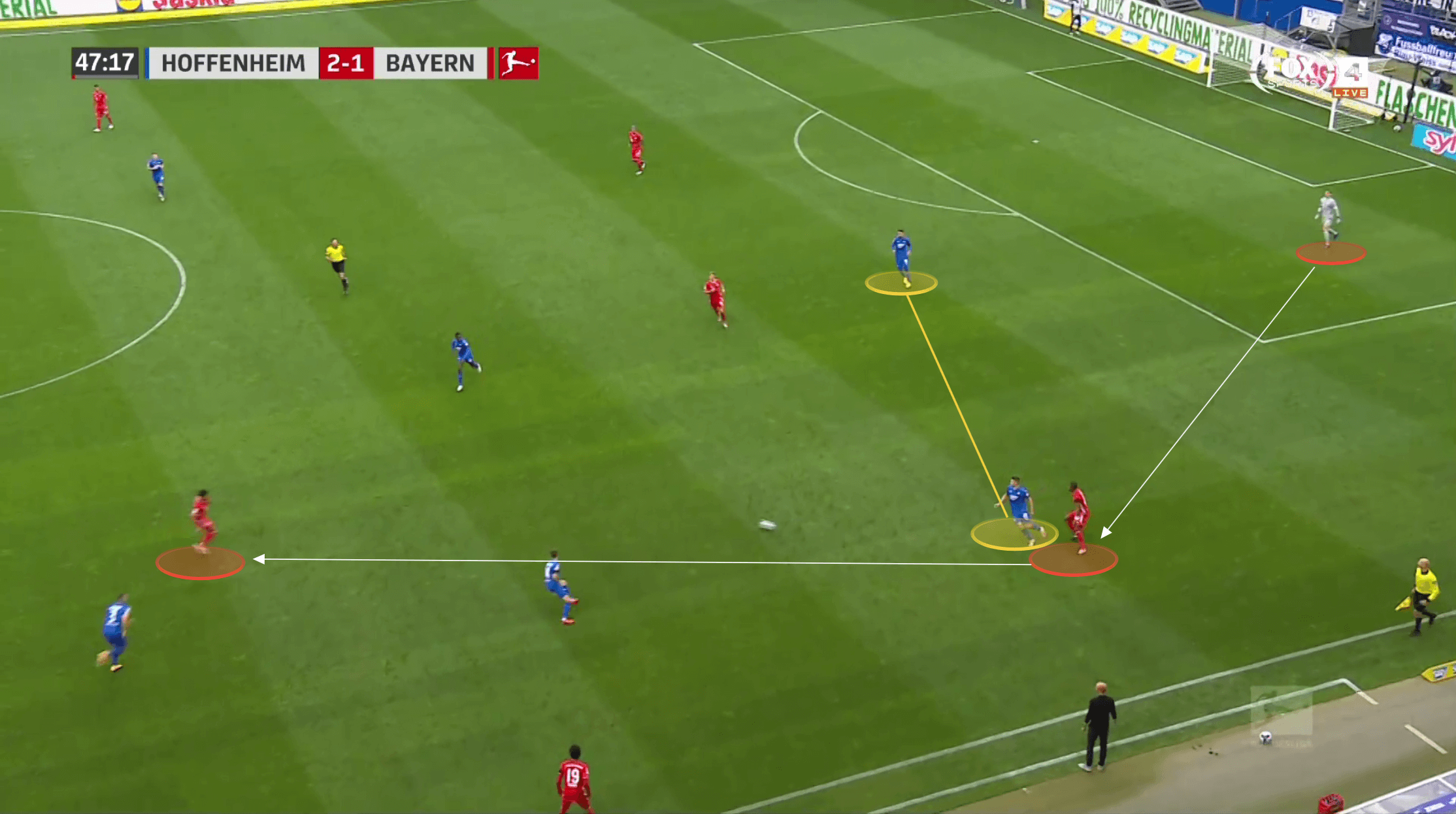 Hoffenheim’s defence started to become more imbalanced as they looked to cover their midfield, and as the holes began to appear, the likes of Davies, Müller and Sané started to look more dangerous.

There were some nice interchanges in tight areas, with the example below showing Zirkzee letting Davies’ pass inside roll behind him to Müller before Zirkzee looped his run behind to receive the through pass. His pass across goal to Sané was perfect, but the winger snatched at the chance. 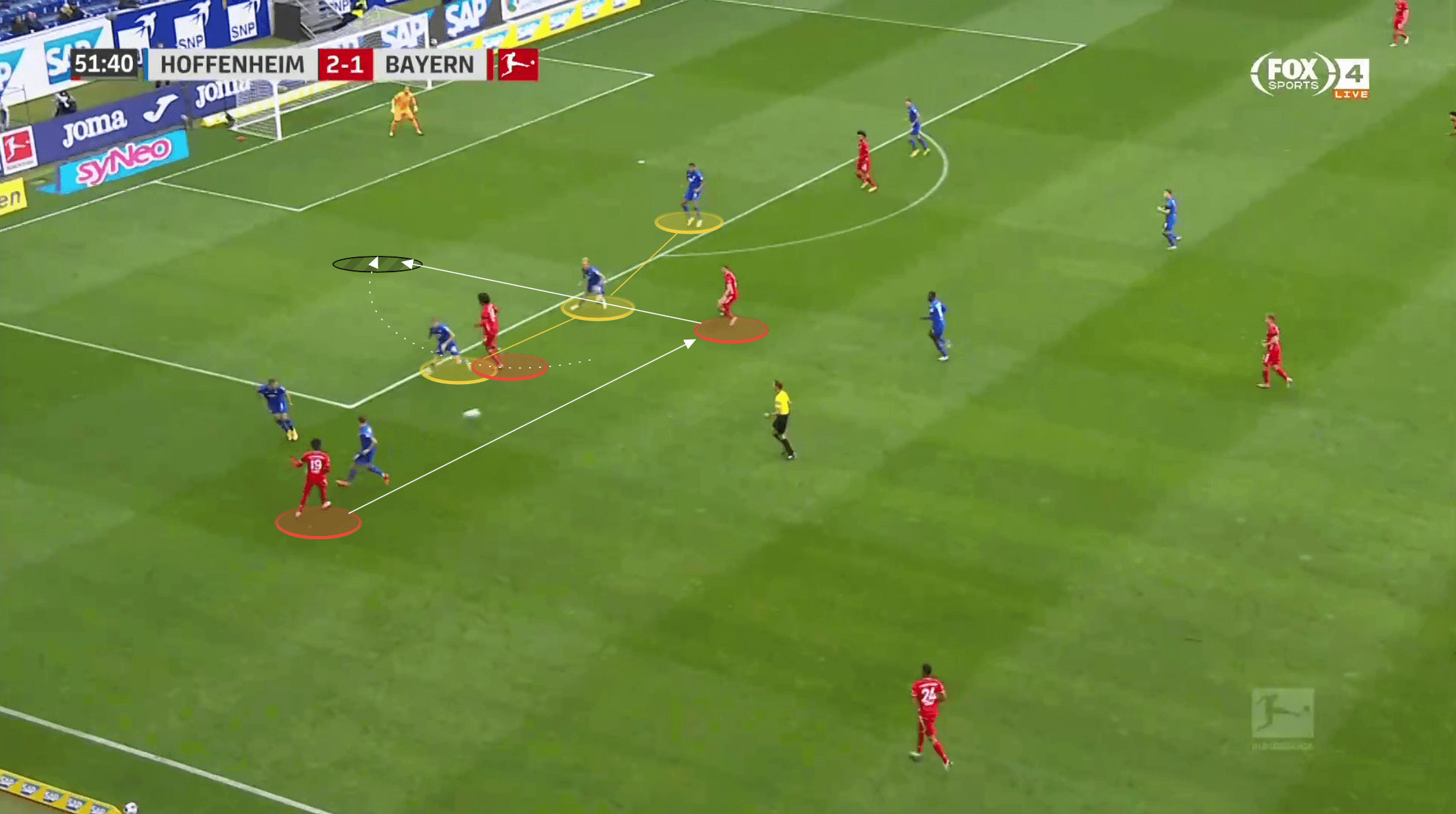 Their best chance to equalise came just after the hour mark when Sané again found space between Hoffenheim’s defenders. We can see how stretched they were with Vogt too far over and Posch too far away as Sané made a run from deep between the two before latching onto a pinpoint cross. 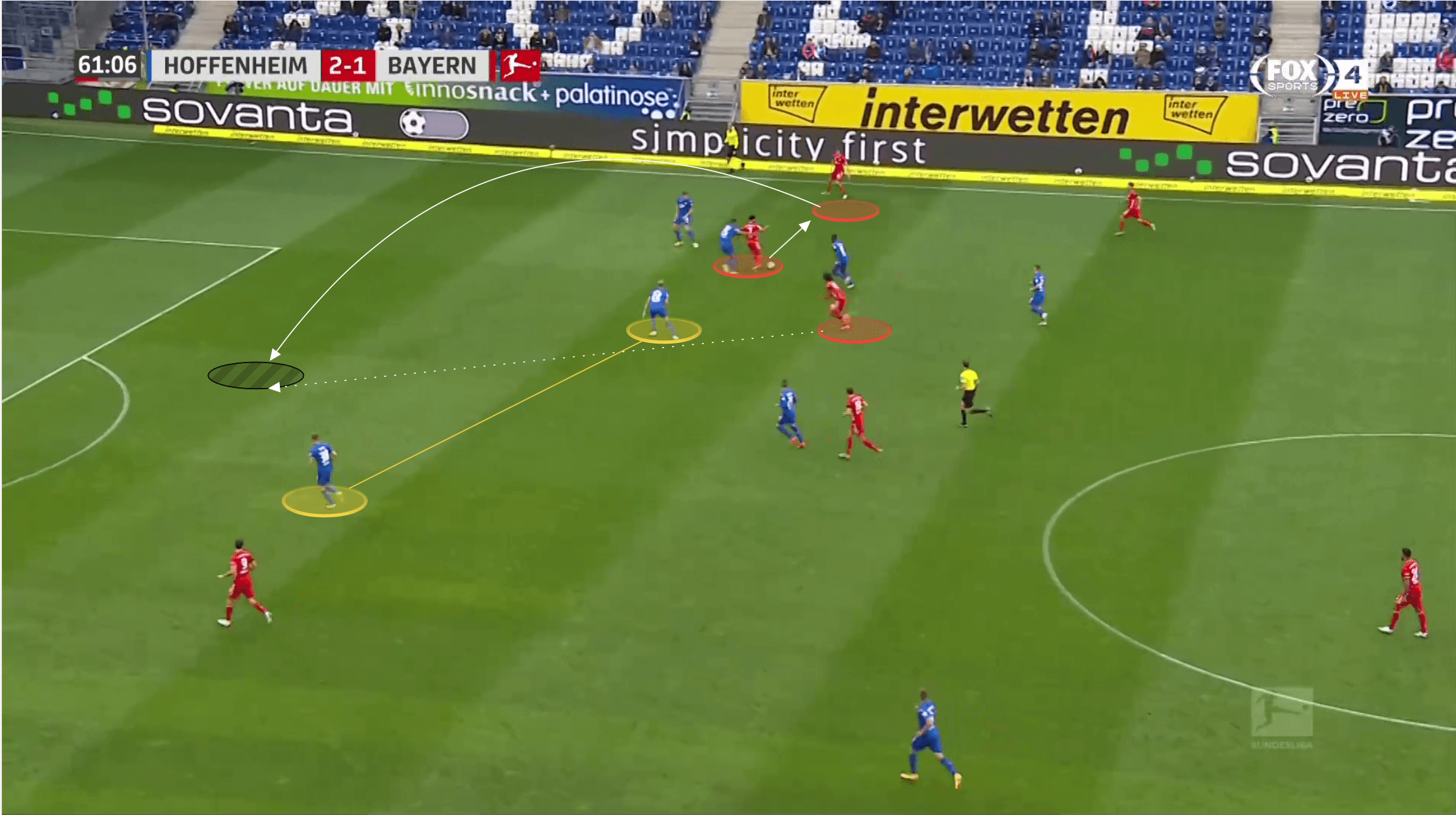 Unfortunately for Bayern, he was unable to take advantage of this move, and 15 minutes later, Kramarić scored the game that put the nail in Bayern’s coffin.

Although it was an overall sloppy performance from Bayern, littered with sub-standard individual efforts from their squad and plenty of mistakes, Hoffenheim deserve credit for a sturdy defensive performance. They were able to prevent Bayern from playing effectively in areas where it mattered, keeping them well away from the centre of the pitch in dangerous areas, and quickly turning defence into attack, before capitalising to great effect on their chances.

It will be fascinating to see how Bayern bounce back from this game, but also to see how Hoffenheim build on this performance, as they made it two wins from two. Although it’s early stages in the league, this was a surprising result, not because of the scoreline, but because Hoffenheim were absolutely the better team and fully deserved to win.