José Mourinho’s side came back strong against Southampton after the 1-0 defeat at home against Everton. They have a big task of maintaining their form and fitness as they compete for Europa League qualifiers and Carabao Cup in this busy schedule. Newcastle must be booming with confidence after their impressive 7-0 win against Morecambe in Carabao Cup. The Magpies won last time when they travelled to London to play against Tottenham. In this tactical analysis, we will examine the game-play and strategies of both sides. The following analysis will focus on the tactical aspects of the match and its effects on the result. 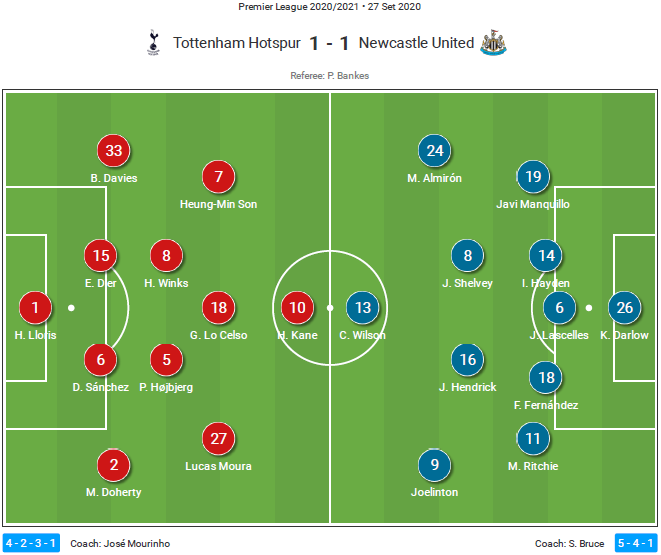 Mourinho made just one change from their 5-2 win against Southampton. Erik Lamela came in place of Tanguy Ndombèlé. Spurs’ fans will have to wait a bit longer to see the new signing from Real Madrid Sergio Reguilón. Spurs played in a 4-2-3-1 with Hugo Lloris in goal. Matt Doherty, Eric Dier, Davinson Sánchez and Ben Davies formed the back-four. Harry Winks and Pierre-Emile Højbjerg were double pivots. Lucas Moura and Son Heung-Min on the wings with Giovani Lo Celso as attacking midfielder. Harry Kane was the lone striker up-front.

Steve Bruce made three changes from their 3-0 loss against Brighton in the Premier League. Miguel Almirón replaced injured Allan Saint-Maximin. Andy Carroll paves the way for Joelinton upfront, and Matt Ritchie comes in for the new signing Jamal Lewis. They changed their formation from 4-4-2 to 5-4-1 for this game. Isaac Hayden joined the centre-backs Jamaal Lascelles and Federico Fernández in front of Karl Darlow.  Javi Manquillo and Matt Ritchie played as wing-backs. Miguel Almirón, Jonjo Shelvey, Jeff Hendrick and Joelinton played as the midfield four. Newly acquired Callum Wilson led the line. 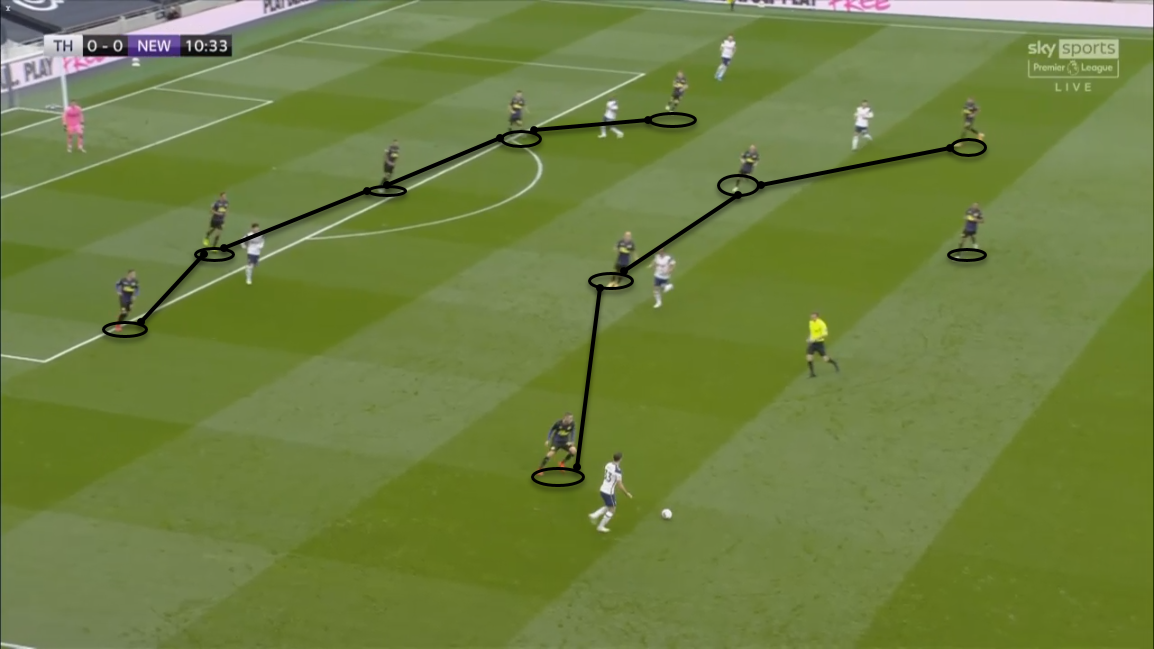 Newcastle United defended in a 5-4-1 low block. They focused on zonal marking and didn’t show real interest in keeping the ball from the start. Bruce’s side had only 37% possession in the game. Newcastle prioritised defending space with this formation. They guarded the defensive third and didn’t worry much about the activities outside it. They offered a free pass to Spurs to enter their half as they didn’t press them in the build-up.

Their passive zonal defending started causing issues from the start. The low-block increased the distance between Newcastle’s second line of defence and Tottenham’s double pivot Winks and Højbjerg. Lack of pressing gave them more time on the ball. They were allowed to pick their timely passes and regulate possession. Winks attempted 11 progressive passes with 100% accuracy, and Højbjerg attempted 16 progressive passes with 88%. 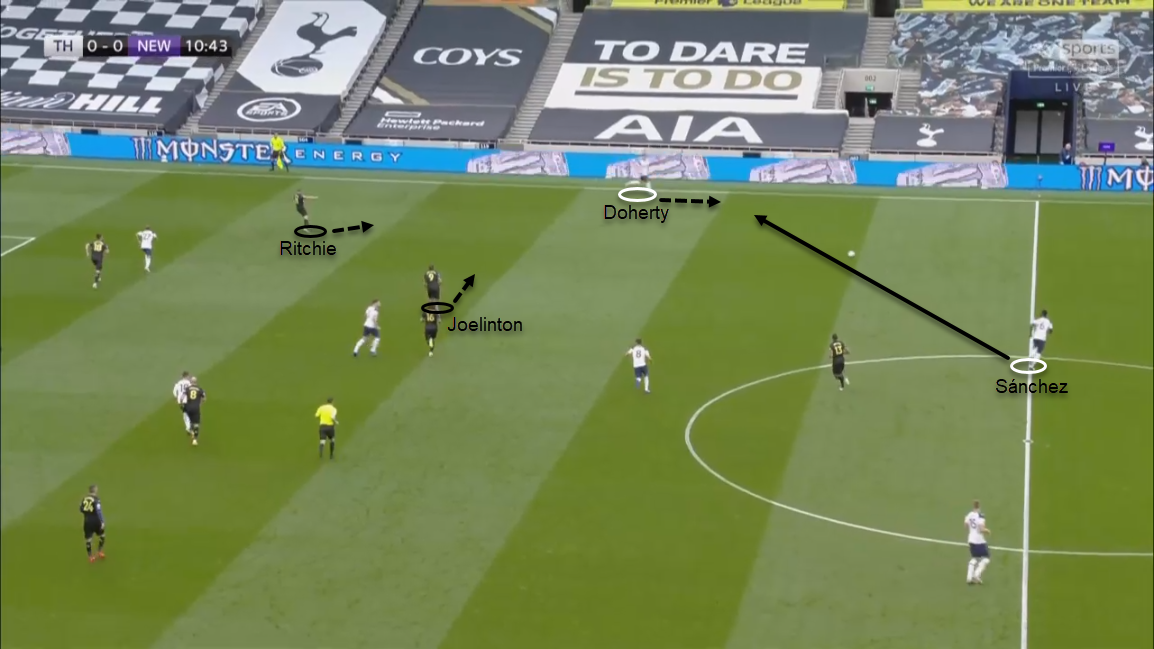 Doherty and Davies were not under inspection until they entered the final third. As there were no clear marking responsibilities, Spurs full-backs were the easy receiving targets. The picture shows Ritchie was too reluctant to leave the space and put any kind of pressure on Doherty. He directed Joelinton to get close to Doherty. The Irish fullback attempted ten progressive passes with 100% accuracy and on the opposite end; Davis attempted five progressives with total success. Newcastle’s defensive set-up required a lot of communication and offered minimal flexibility. Spurs were easily allowed to create chances from the back in the first half. 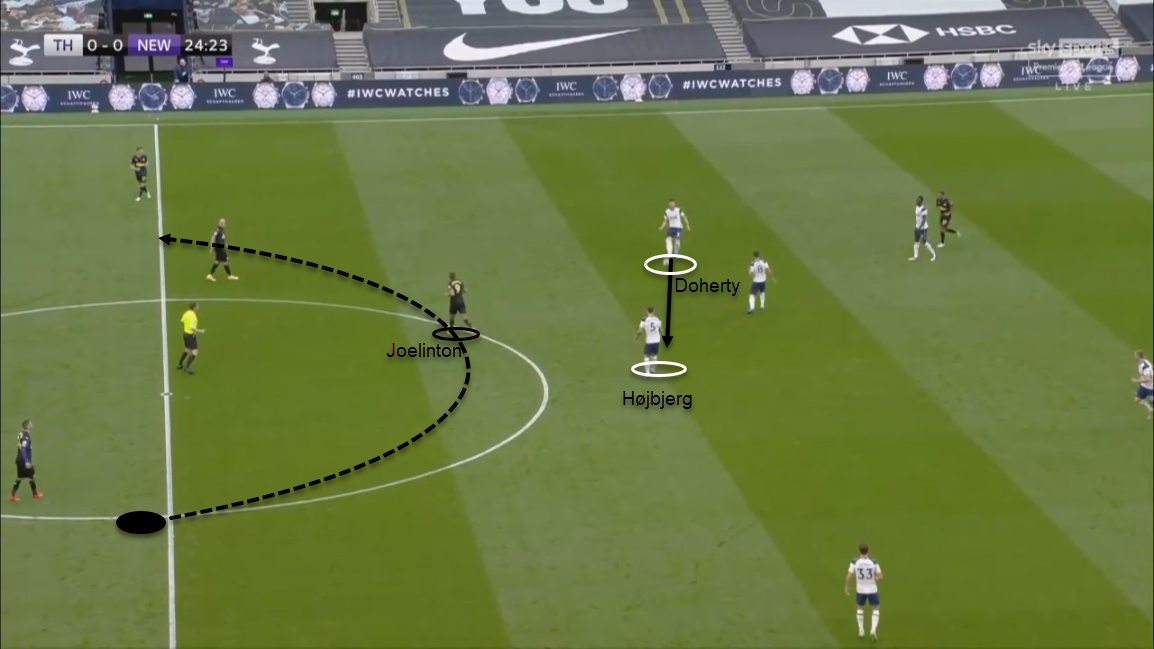 The same system brought issues in negative transitions and affected the player’s decision making. Joelinton had switched the flank in his movement during the transition in the 24th minute. After the team lost the ball, he decided to run across and get back to position on the assigned left side. Despite being closest to the ball, he decided against going for the press. Newcastle’s priority to positioning and regaining shape was evident from this incident. 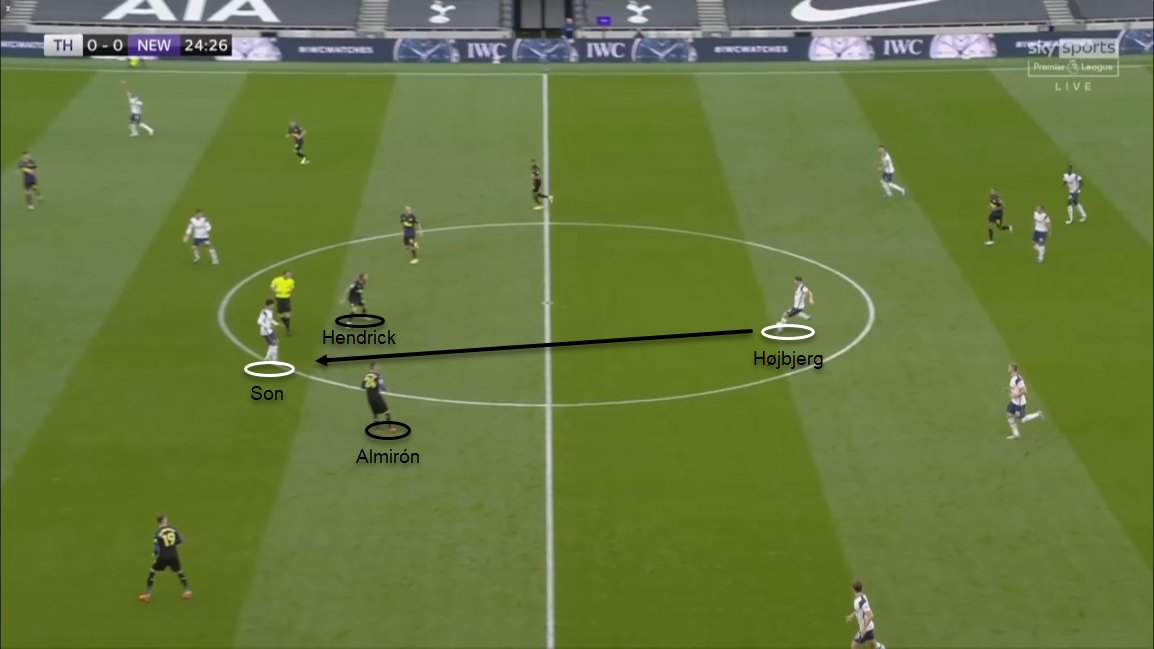 Doherty played a simple pass to Højbjerg as Newcastle’s second line of defence focused on getting back in position. He then conveniently slipped a ball to Son through the channel. This eventually led to Spurs taking the lead in the match. The reorganisation was ineffective given the time and space Højbjerg had, and therefore it cost them the goal.

Newcastle’s defenders were often caught double-minded. They struggled between staying with the player and protecting the space. In the game, as Lamela dropped to support Sánchez, Lewis followed him half-way through. 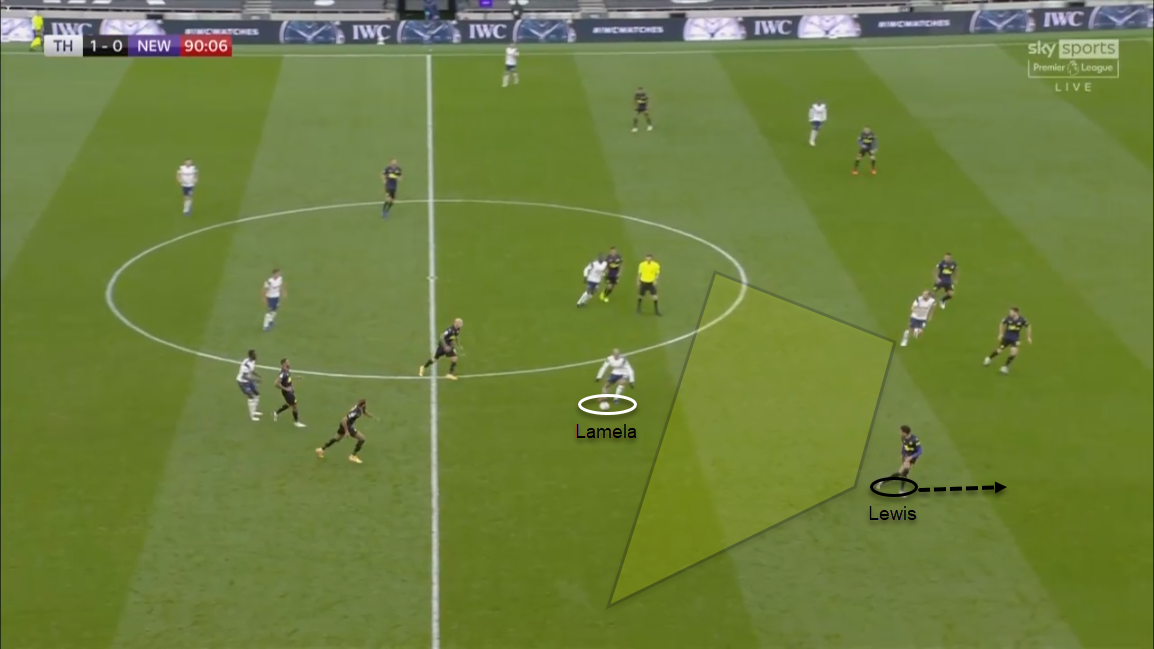 He then opted against going all the way and started back-tracking. This allowed Lamela to turn on the ball and carry it further. Similar situation rose time and again in Spurs’ favour. The backline was therefore easily unorganised as the defenders had a hard time deciding.

In the second half, there were instances when the Magpies pressed in the opposition half. Their attempts were futile as they were too cautious about committing a considerable number of players to press. There was no particular system but just some desperate attempts to win the ball.

Spurs progressed in the first and second phase of the build-up without much hindrance. They tried to beat the low-block from all areas of the pitch and were successful in creating attempts from all. However, there was no end product.

Højbjerg, Winks and Dier played balls from the deep to test Newcastle’s backline. Dier would sometimes push forward in the left half-space, and Højbjerg would drift in the right half-space with Winks in the middle. The trio played 13 successful long balls from a total of 18 attempted.

In transitions, Kane didn’t act as a target man instead dropped back to help. He doesn’t hesitate to create for his teammates, and he showed it last week by assisting Son on four occasions. 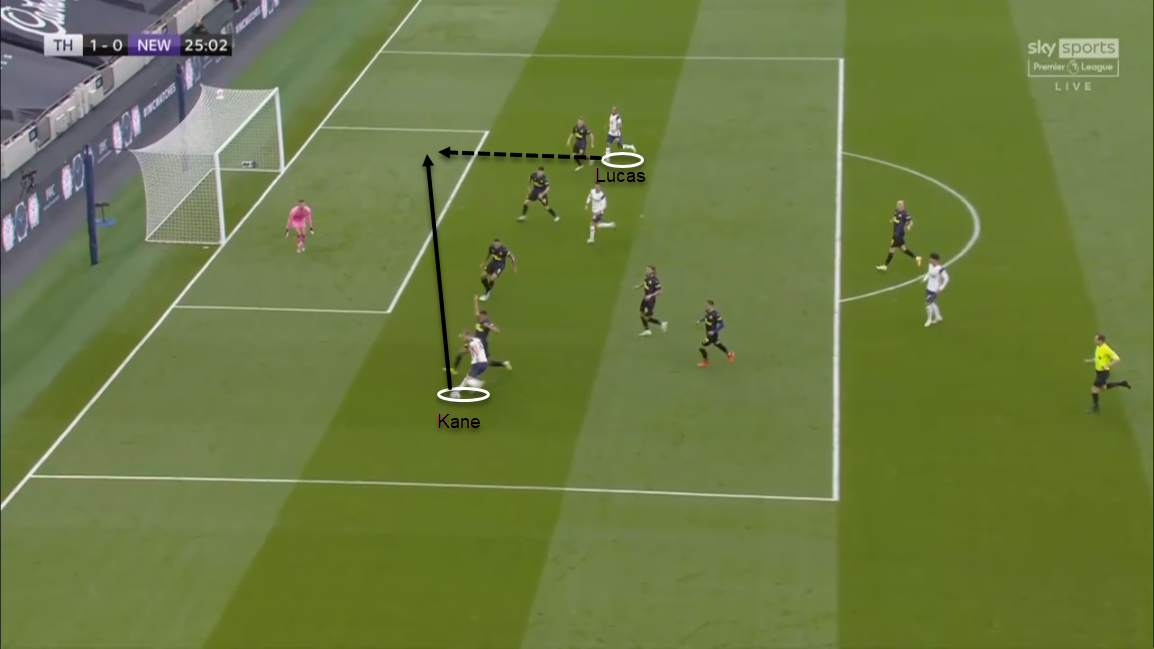 In this game as well, he delivered inch-perfect passes into the path of his teammates and thus bagged one more assist this season. 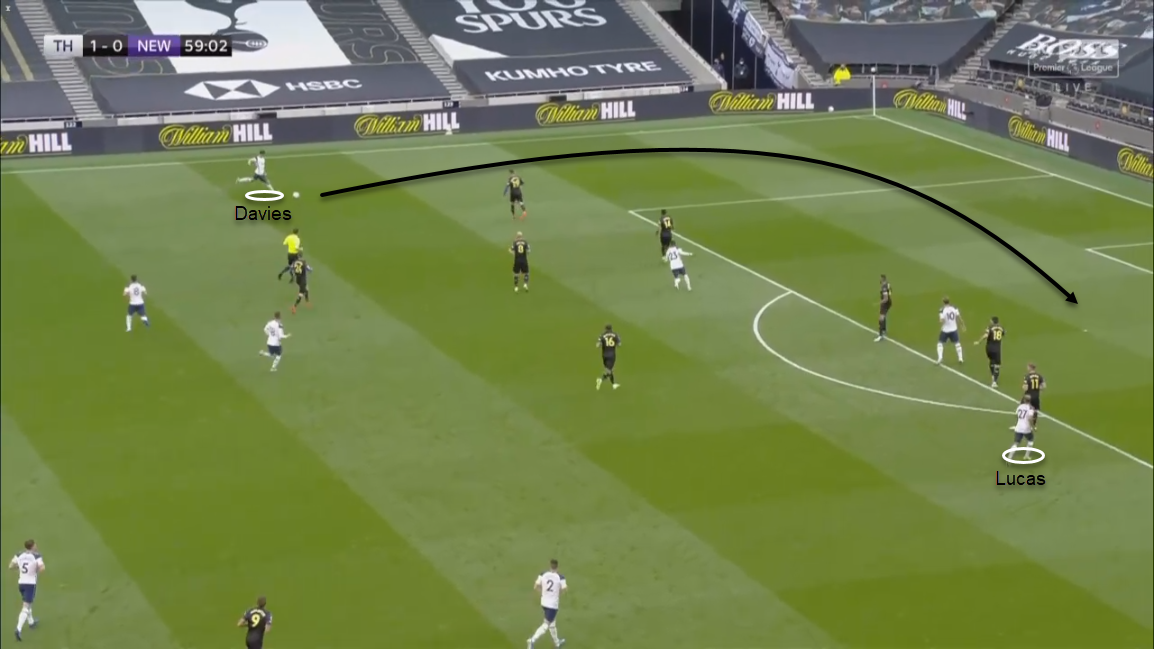 On the flanks, the full-backs provided the width for the team when in the attack. From the left, Davies delivered early crosses whenever he got a chance. Lucas Moura would tuck in when the ball is on the left to attack the box.

The early cross created a good opportunity for Kane after Moura won the first header. He hit a half-volley which ended straight into goalkeeper’s hand. Harry Kane took seven shots in the game with five on target yet didn’t get on the score sheet. Davies had a perfect record in delivering four crosses from the left.

On the right corridor, Spurs tried to create space for Doherty to make underlapping runs. It was done to get the best out of him as he is most impactful inside the box, reminiscent to what he did at Wolves. 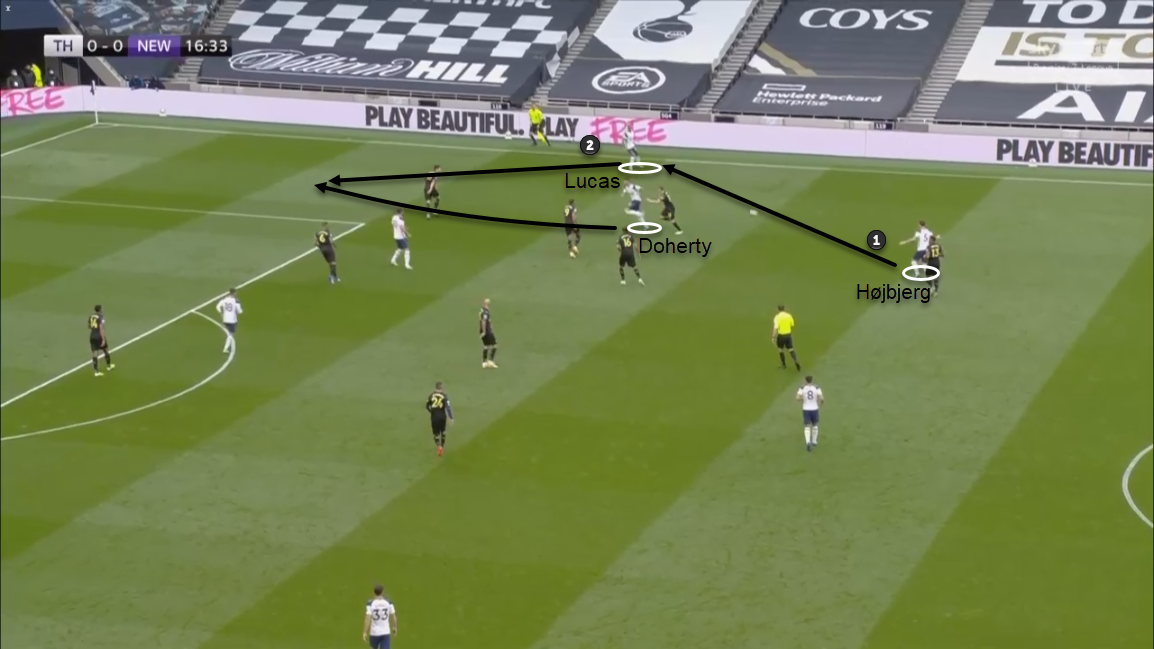 Doherty would either interchange positions or use combination moves to create space near the edge of the box. 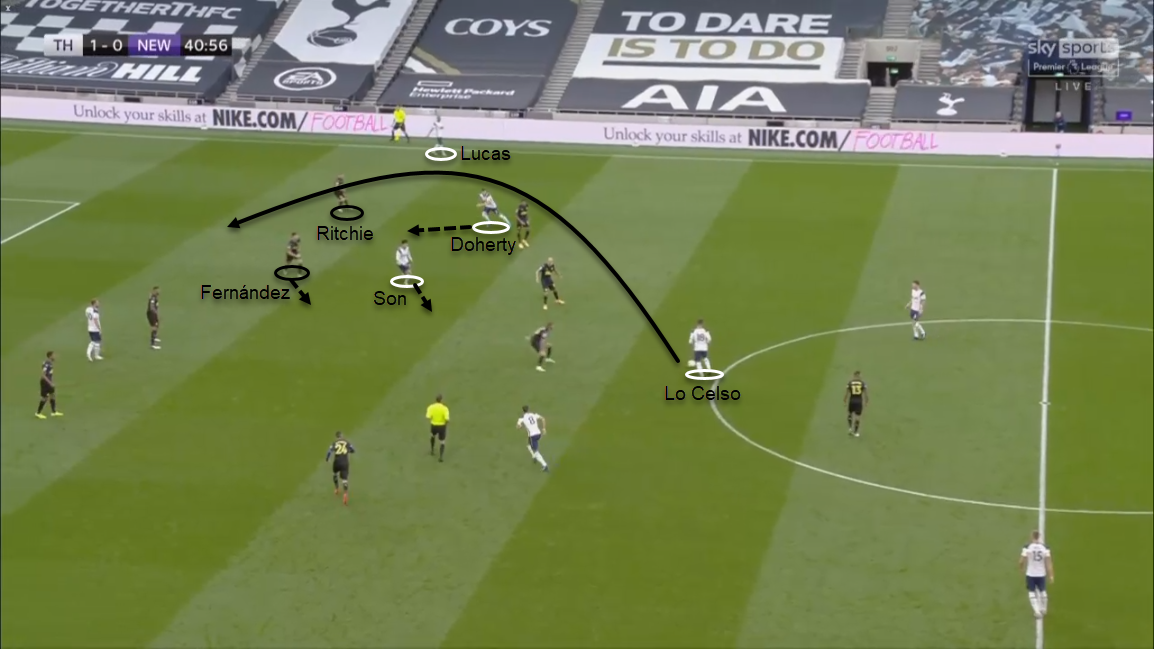 Lucas Moura gave vertical support to stretch the opposition wide and allow Doherty to run inside. He would also engage in quick one-twos and set for Doherty to deliver the cross.

Son hit the cross-bar from Doherty’s headed lay-off. Son was unfortunate to hit the frame of the goal twice in the game.

In the first half, the Magpies mostly relied on positive transitions to create chances. On winning possession, they didn’t try to combine and play through Spurs but instead tried to directly get the ball to their striker Wilson. Newcastle faced two particular problems with this approach.

Newcastle’s plan to get Wilson wide behind the advanced full-back Doherty didn’t turn fruitful as Højbjerg provided adequate cover in the right half-space. Wilson was also outnumbered by Tottenham’s rest defence which consisted of Dier, Sánchez, Winks and Højbjerg. 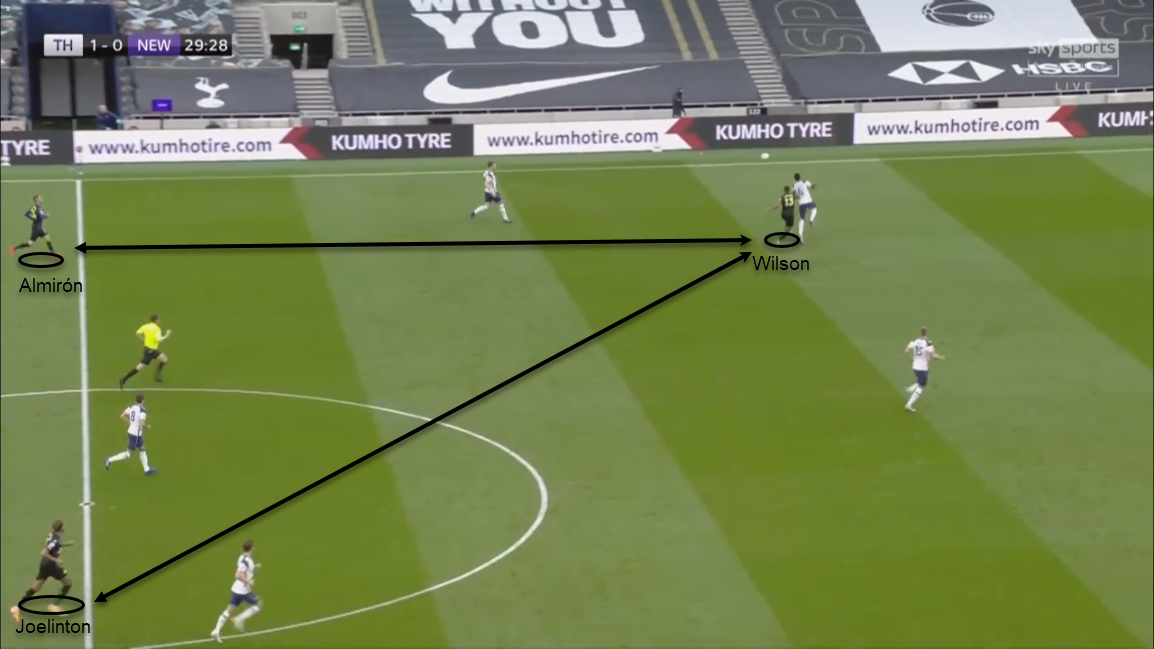 The low-block didn’t help in creating immediate support for Wilson, and the players were quite distant from him in transitions. The long balls were, therefore intercepted and resulted in a loss of possession. Whenever Newcastle found a route to attack in transitions, Spurs used infractions to clearly sabotage the Newcastle’s attack and nullify their threat.

Newcastle United didn’t use their wing-backs to their full potential. They usually stayed deep and close to the centre-backs in the first half. Joelinton and Almirón tucked closer to Wilson. Due to which, they didn’t have sufficient width higher up the field. The centre-midfielders too, didn’t push themselves up. There was no supply of crosses or key passes, and the attackers were isolated to create for themselves. 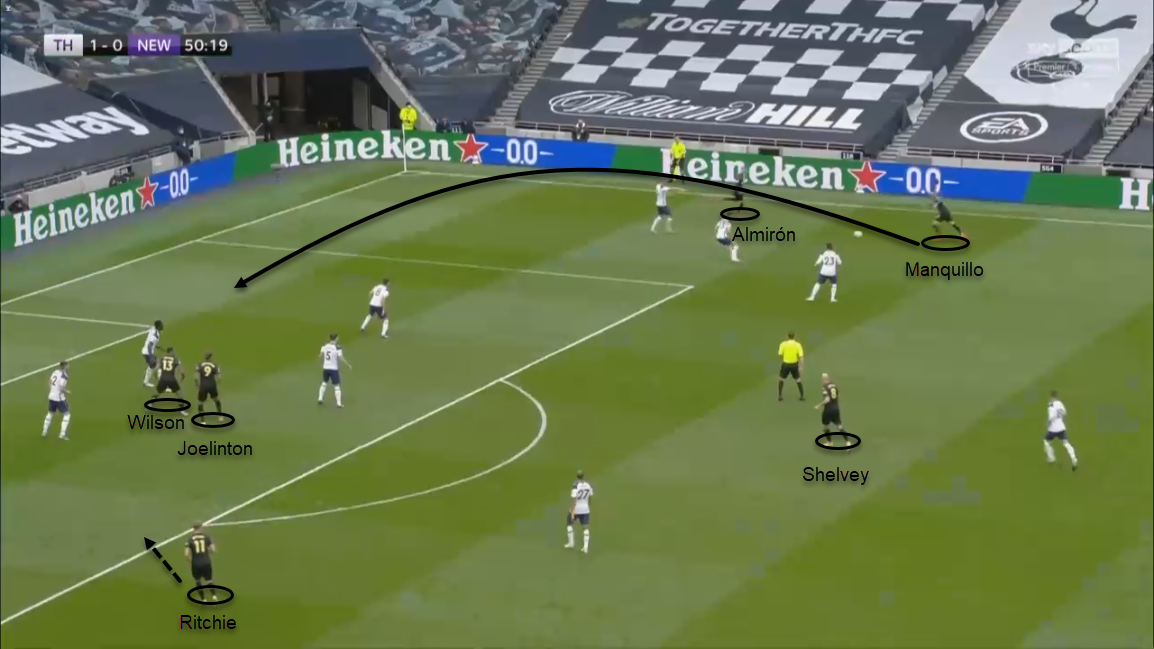 In the second half, Steve Bruce encouraged his wing-backs to go further up the field. Joelinton was instructed to play in his natural role as a striker from left-midfielder when they were in possession. Manquillo tried to deliver a few crosses, but none resulted in a shot. He delivered most crosses (four) for Newcastle. 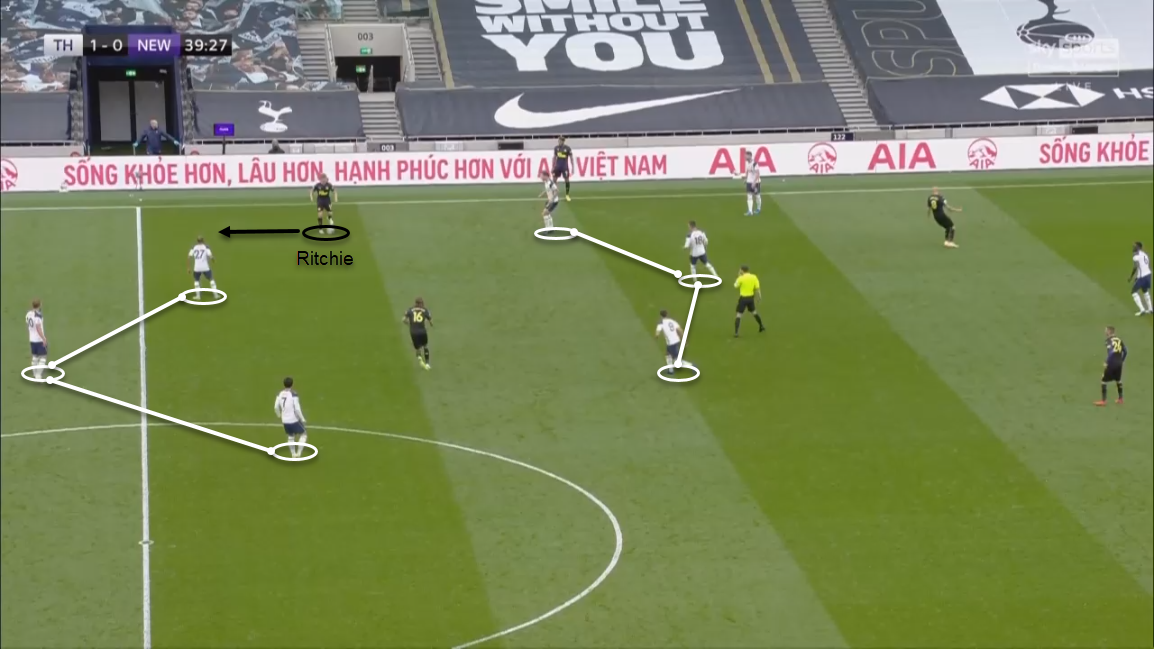 Spurs defended in a narrow 4-3-3. Lo Celso settled between the pivots to create the midfield three. Newcastle had the opportunity to use this format and outnumber Spurs on the flanks or create 1v1s using the quick switch of play. However, they chose to switch from the defence by playing it back. A big reason for it was because the wing-backs were not encouraged to go forward in the first half.

This gave Spurs enough time to march across the field and cover the other end. They needed crossfield balls and midfield switch of play to get an advantage.

Newcastle did apply the required changes in the second with Shelvey and Hendrick taking the job in their hands. They displayed a good range of passing with decent accuracy.

The substitutes prompted multiple changes for Newcastle. The Magpies moved to 4-4-2 after bringing on Jamal Lewis. Hayden moved to midfield and Hendrick was replaced by Murphy as the right midfielder. Carroll’s introduction played a big part in Newcastle’s tactics. 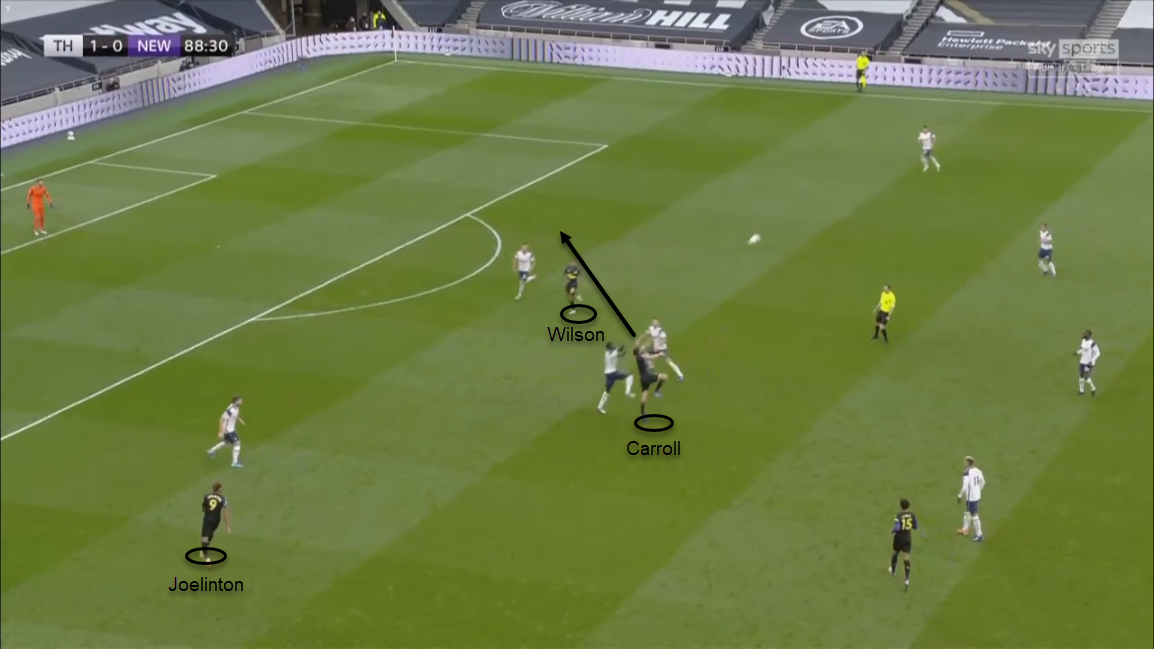 They shifted to 4-4-2 asymmetrical with Joelinton, Wilson and Carroll playing as three forwards inclined on the left. Besides Carroll helped in winning the first headers and supplied them to the other two. He was also the target in set-pieces.  His header from a free-kick hit Dier’s arm in the dying minutes of the game. The VAR reviewed the situation and gave the penalty based on the new handball rule.

Despite all the positive changes, Newcastle failed to establish a stronghold in the game. They failed to create good chances for themselves. They took five shots in the game with only one on target which was from the penalty.

A frustrating result for Spurs after dominating the game with a positive performance. The new handball rule has certainly raised many questions. Son’s injury at half-time is the new concern for Mourinho’s side as they face Chelsea next and then Manchester United on the weekend. Newcastle has had only three shots on target in three league games, and they have been lucky enough to score three goals from it. Astonishingly, Newcastle has secured four points from it. Their performance was below par. The team needs to work on their defensive tactics and improve their attacking prowess immediately.