The defeat against Manchester United on the last day of Premier League dismayed Leicester City’s hopes of finishing in the top four. This season, Brendan Rodgers and his men have set out to finish this quest of achieving UEFA Champions League football. The Foxes kicked-off the season just the way the fans would have wanted with a 3-0 win against West Bromwich Albion.

On the other hand, despite having a relatively thin squad, Burnley finished 10th last season. They did brilliantly defensively last year as they focused on team structure and organization. This is Burnley’s first match of the season as their match against Manchester City was called off to give City a break for their extended season.

This is a tactical analysis of Leicester City vs Burnley where we will analyze the tactics of both sides for the game. The analysis will examine the events of the match to correlate with the result. 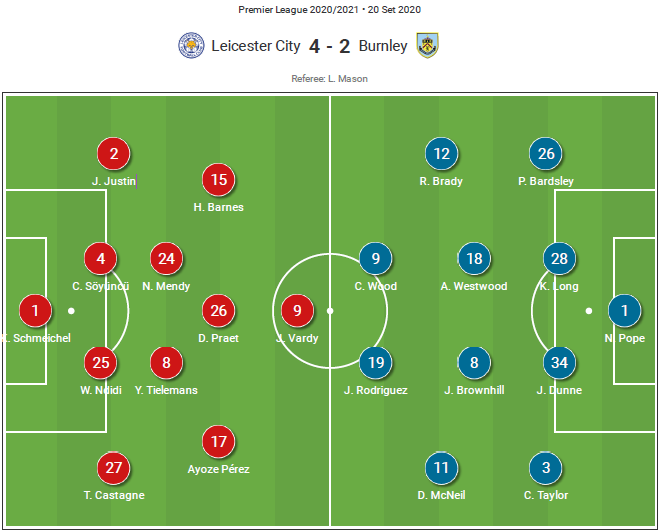 Leicester moved to a 4-2-3-1 from the preferred 4-1-4-1 for this game. Timothy Castagne is the new signing for the Foxes from Serie A. Rodgers named the same starting eleven as last week. Kasper Schmeichel took charge of the goal with Castagne, Wilfred Ndidi, Çağlar Söyüncü, and James Justin in front of him. Nampalys Mendy and Youri Tielemans played as a double pivot and Dennis Praet stationed ahead of them. Harvey Barnes and Ayoze Pérez played on the wings and Jamie Vardy led the line.

Leicester City wanted to be in control from the start of the match and it doesn’t come to surprise when they are playing against a side like Burnley. They pushed their full-backs higher up the pitch and widened the distance between their centre-backs, forming pathways for Mendy and Tielemans in the centre. 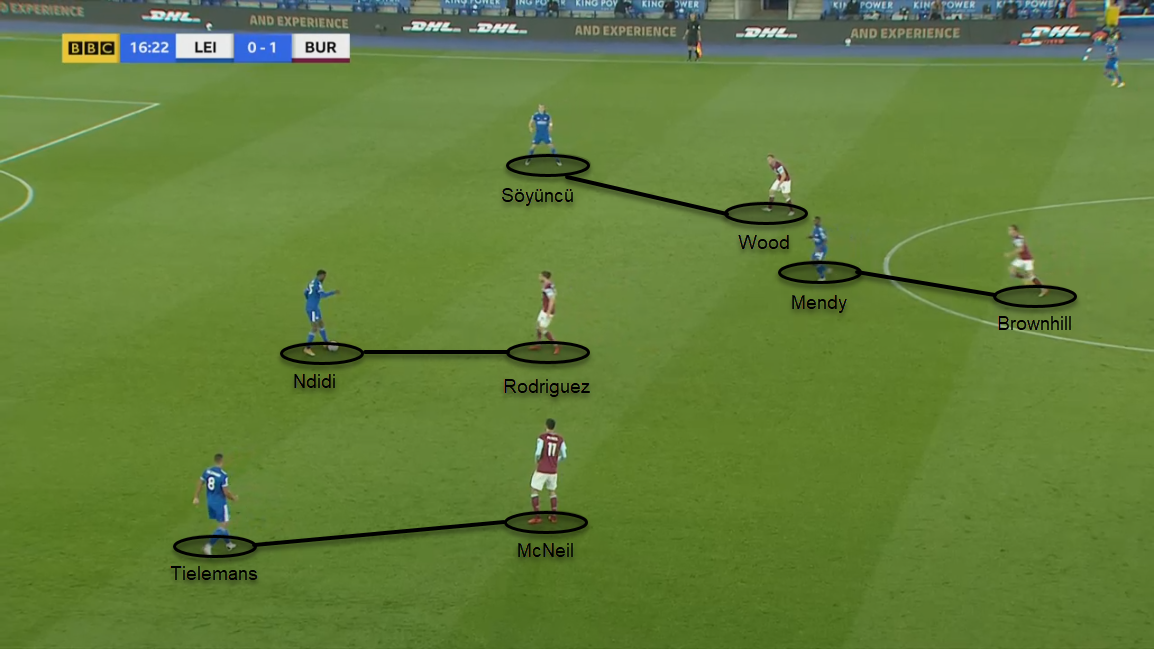 To counter that, Burnley were set-out to press high in order to make the Foxes’ job difficult. They used man-oriented zonal marking in their high press. Which meant that Burnley’s players covered their respective area and at the same time got closer to the player in the zone. Therefore even though Castagne moved higher on the pitch, McNeil was marking Tielemans who had moved into his right-back’s position.

This was to cut out the immediate midfield options and try to move the ball back to Schmeichel. The intention was clear, to force a long ball as Burnley had their superiority in winning aerial duels and thus had better chances of regaining possession.

Burnley pressed high with six players in particular, while the back-four didn’t reciprocate with the same intensity and height. The first 18 minutes were dreadful for Leicester as Burnley made it difficult for them to progress the ball. However, the Foxes didn’t take long to find the crack in the system and adapt according to it.

Leicester played in 4-2-3-1 against Burnley’s 4-4-2. Since Burnley’s backline didn’t keep a high line during the press, they left a lot of space in the middle third. Leicester’s challenge was only to get the ball to the middle third.

As Brownhill and Westwood marked Mendy and Tielemans tightly, Praet was the resultant free-man of the process. The numerical superiority in the centre forced Brownhill/Westwood to oscillate between their respective centre-midfielder and Praet while pressing. 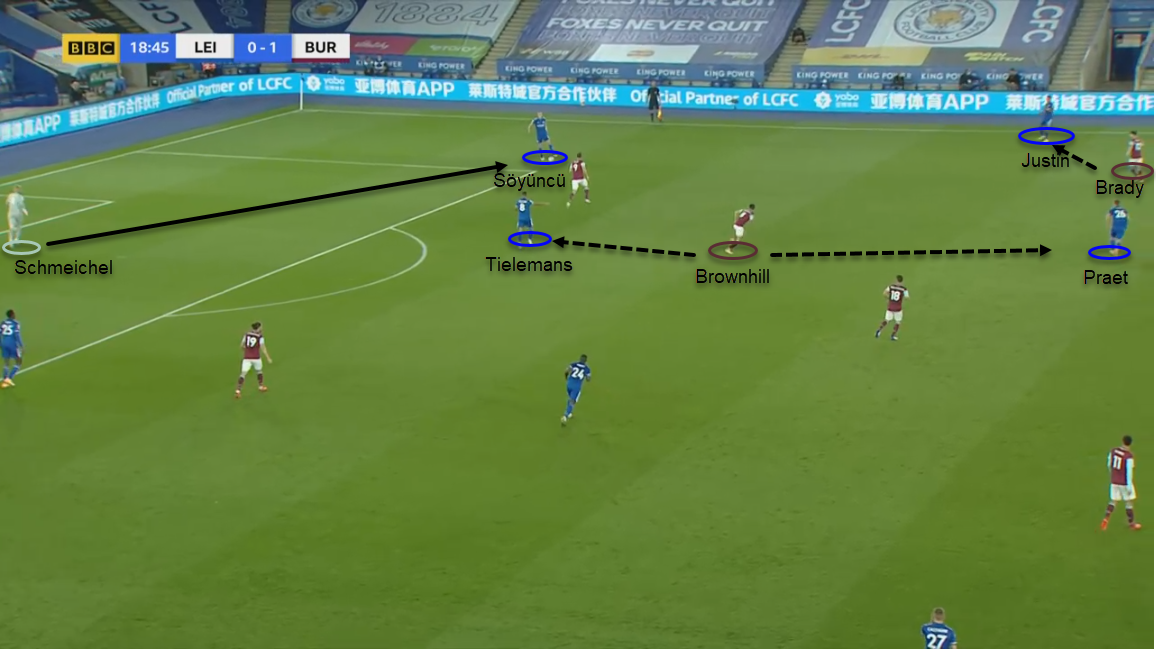 We can see in the picture above as opposed to before (see the first image), one of the centre-midfielders (Tielemans) is now dropping in between the two centre-backs. This increased the distance between Tielemans and Praet for Brownhill to cover.

Schmeichel’s pass to Söyüncü urged Brownhill to leave Tielemans and trackback and cover Praet. At the same time, Brady was approaching Justin and was aware of Praet’s positioning as he was unmarked. 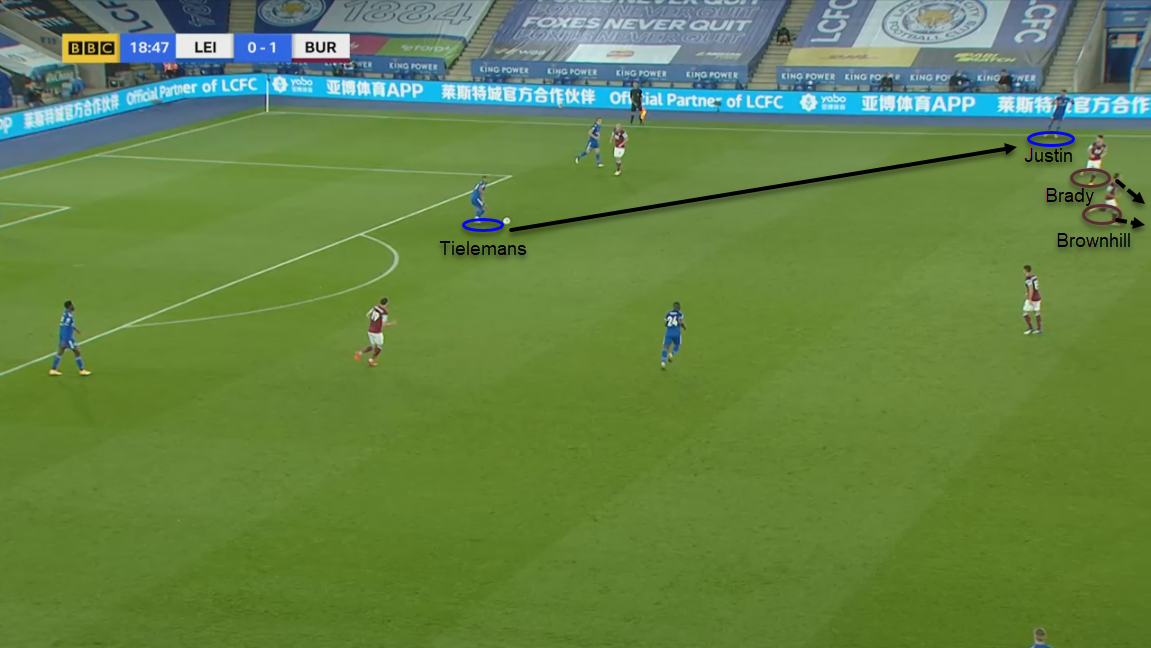 Söyüncü played a lateral pass to Tielemans instead of a forward pass as he was now left unmarked. Since Brady was double-minded and Brownhill was urgently tracking back, both the players ended up going for Praet leaving Justin open in the wide areas.

The pass to Justin further led to the progression of the ball into the final third ending into an equalizer for Leicester. The foxes exploited the imbalanced high press in their best interest. 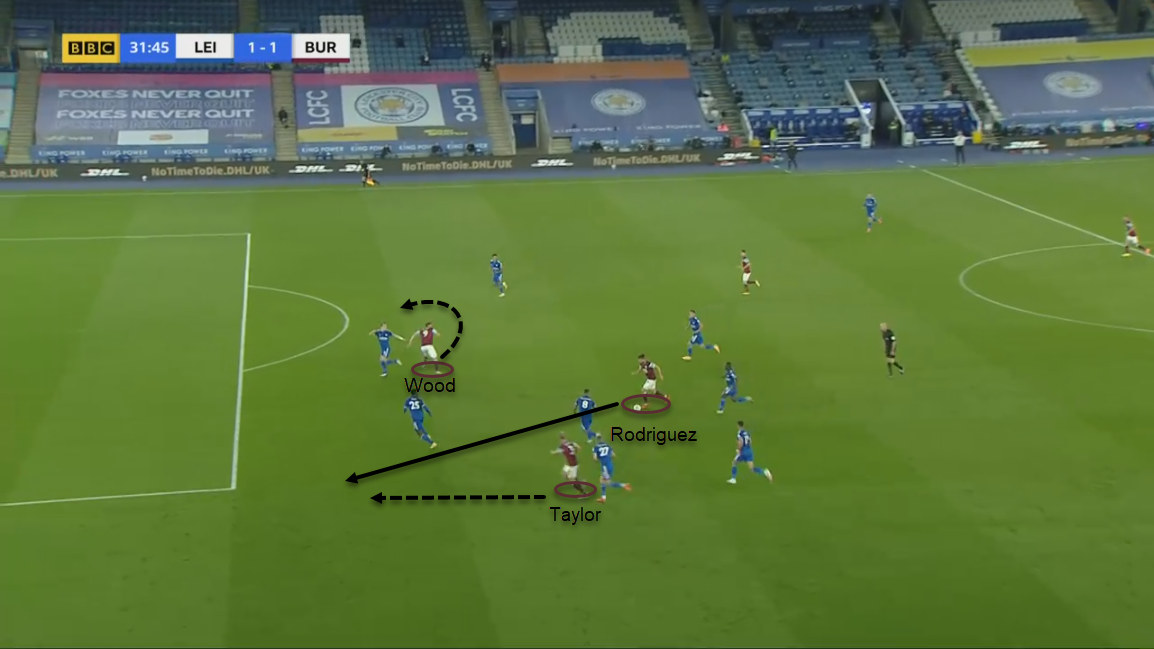 Despite the glitch, Burnley forced 31 recoveries in the opposition half. They started anticipating the passing channels and closed them in time to intercept the ball. Therefore, Leicester conceded a total of seven shots from the losses in their own half. 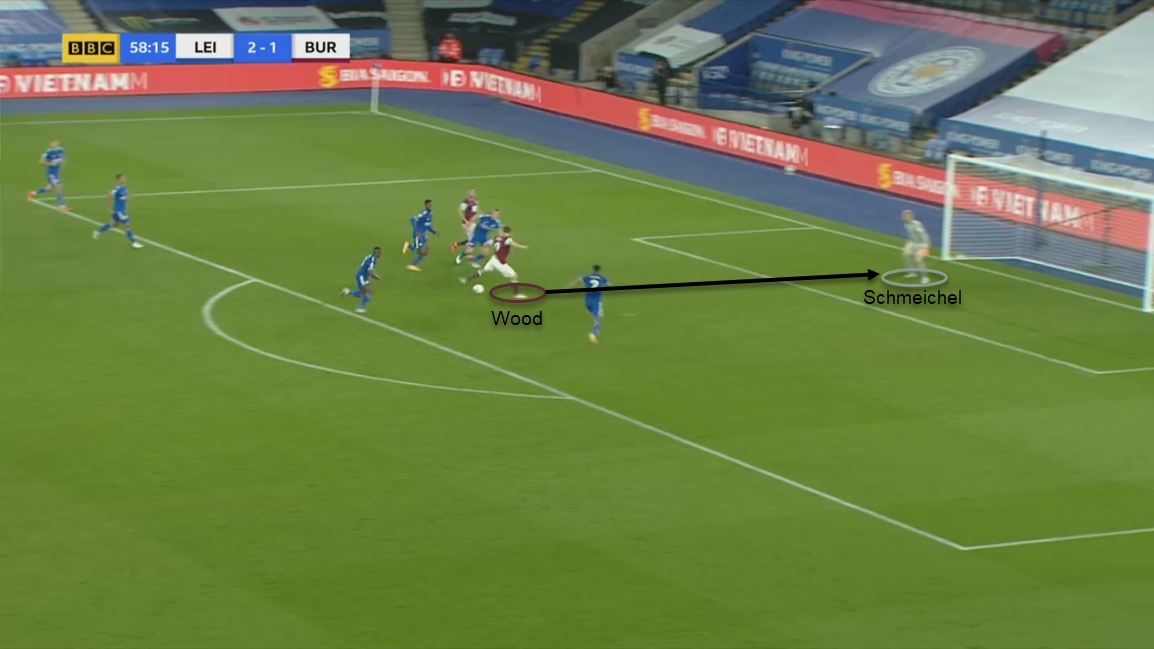 It was evident from Clarets’ performance that they tried to exploit the spaces behind the advanced Leicester full-backs in transitions. However, they failed to take their chances due to their deficient finishing from promising situations.

Burnley defended narrowly but they lacked vertical compactness, mostly because of their attempts to press. Leicester’s attacking midfielders and forwards positioned between the lines to take advantage of this space. 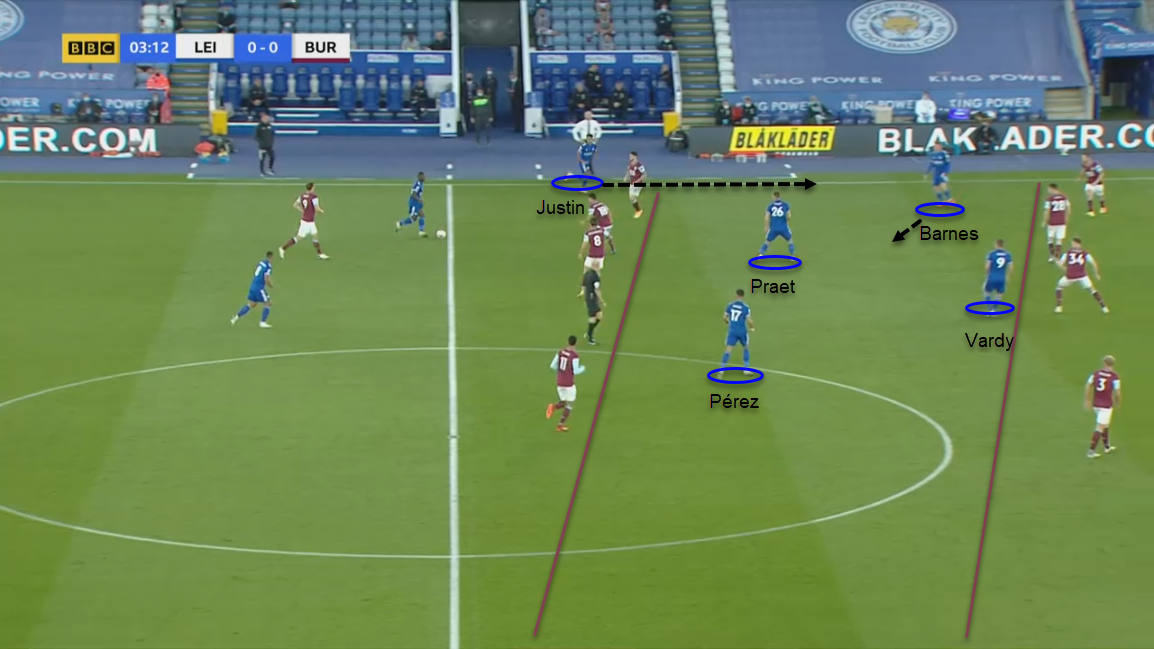 The pressure from Burnley would reduce once the ball entered the middle third. Justin and Castagne held the width of their team when in possession and allowed Barnes and Pérez to invert. Its salient purpose was to have multiple passing options for progression.

The four attackers played close to each other to combine conveniently. This also fostered positional rotations and interchanging moments. As a result, it was easy to drag the opposition out of position and make runs in behind in the final third. 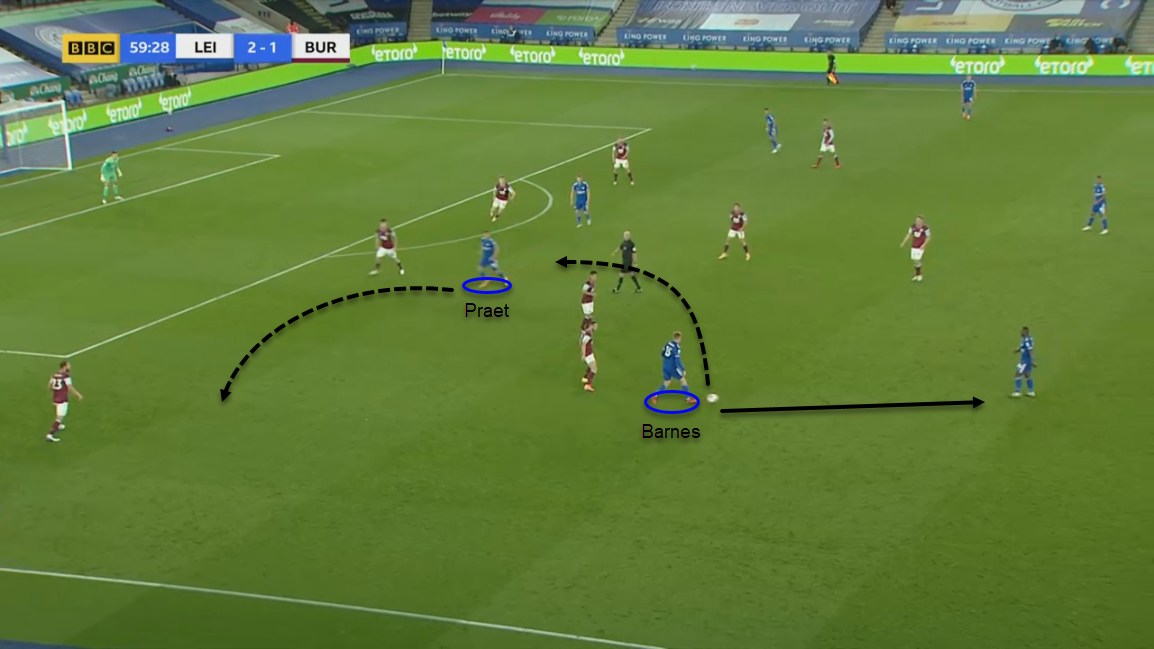 Praet was key in positional switches on both ends with Barnes and Pérez from time to time. Praet’s positioning out wide provisioned Pérez to run inside the box and receive a square pass from him. Hence it contributed to Pérez assisting Justin from a low cross in the box for the Foxes’ third goal.

When teams defend narrowly in the centre, the opposition must rely on quick switches of play to defy the compactness. Tielemans shouldered the responsibility to make the swift switches in possession. He has a brilliant range of passing and vision to play packing passes. The fast switch of play forces the opponent to move with exigency and gives the opportunity to utilize the gaps between them. 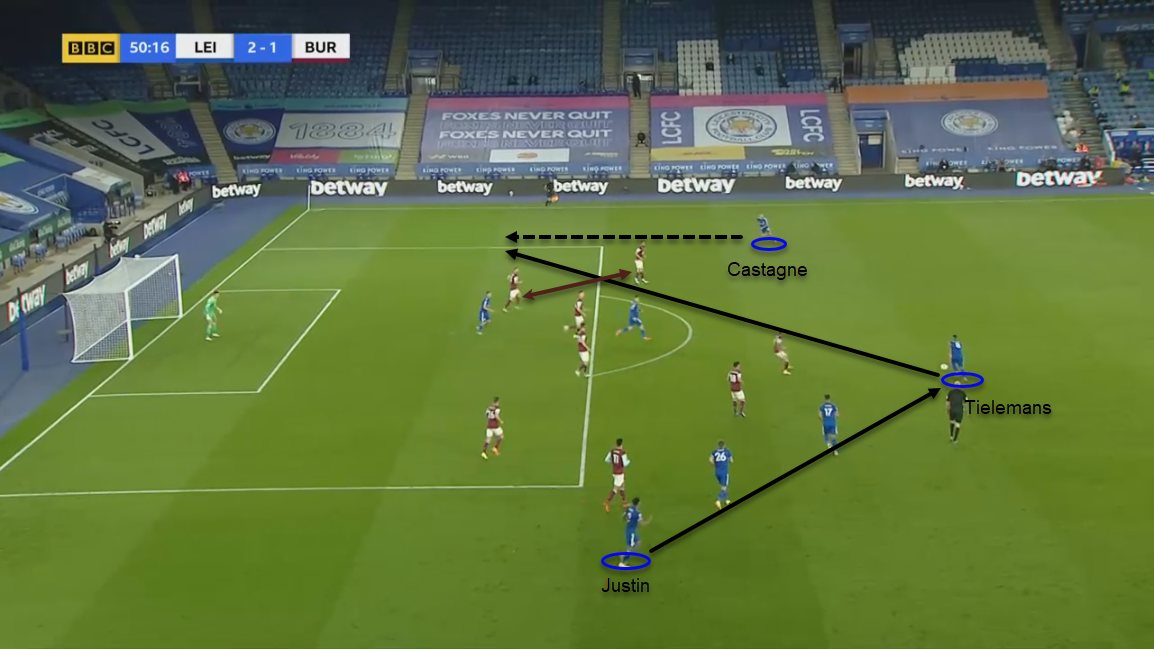 Justin’s pass to Tielemans gave the opportunity to spot isolated Castagne on the right side. The Belgian midfielder pierced the pass through the gap between Pieters and Taylor for Castagne. Eventually, it resulted in an own goal from Pieters.

The circulation was important to prompt crosses from the full-backs. Castagne topped the chart with eight crosses in the game while Justin delivered five. 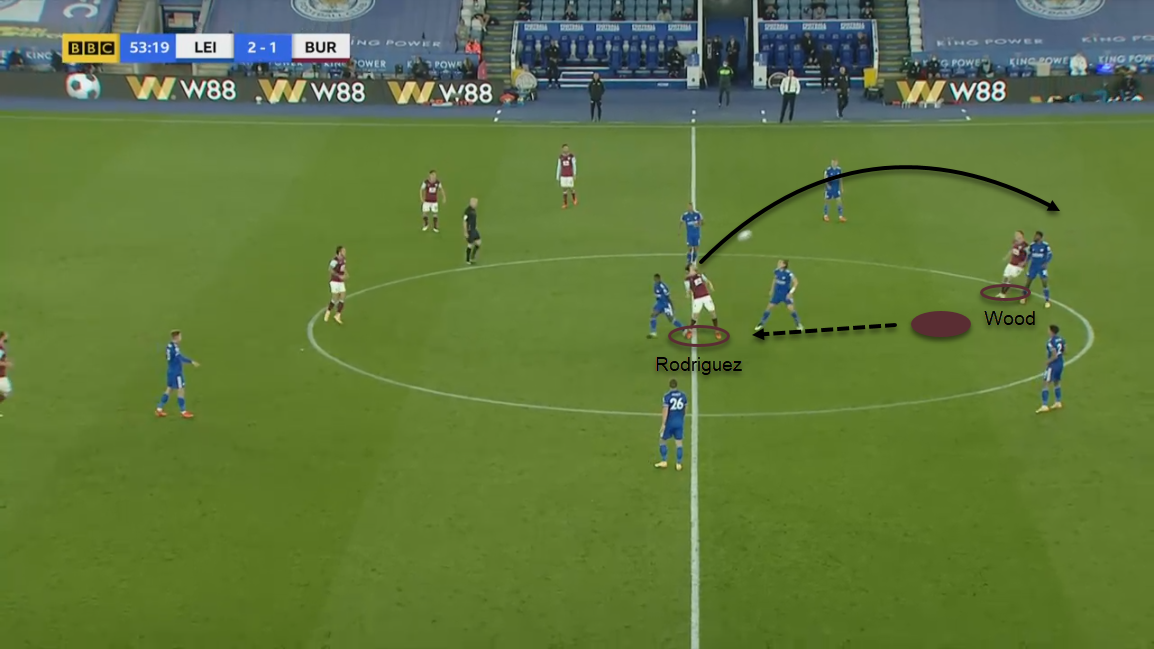 In the build-up phase, Burnley significantly preferred going long to their strikers. Either Rodriguez or Wood would flick the ball for the other. 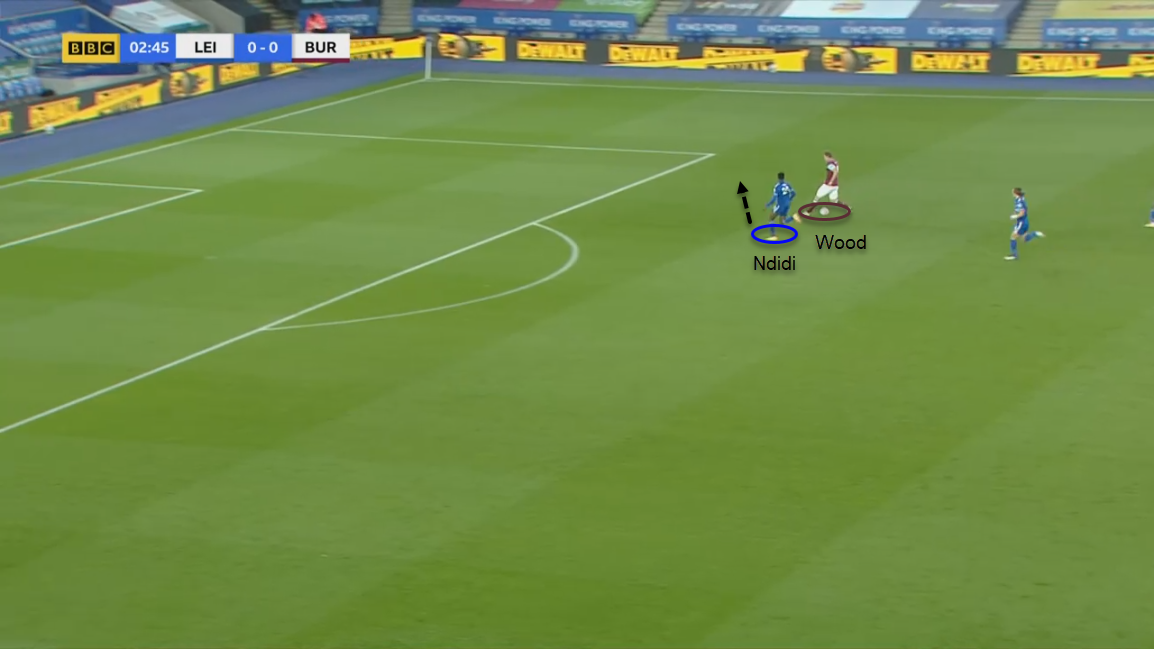 Unfortunately, the Hoofball play didn’t achieve the desired results. Despite getting behind the Leicester defenders, the forwards couldn’t outpace the opposition and capitalize on it.

The Clarets offered a maximum threat from crosses as their aerial dominance is second to none. The forwards targeted the opposite end/far-post in particular. The deliveries from the left were menacing and caused a lot of issue for Leicester. 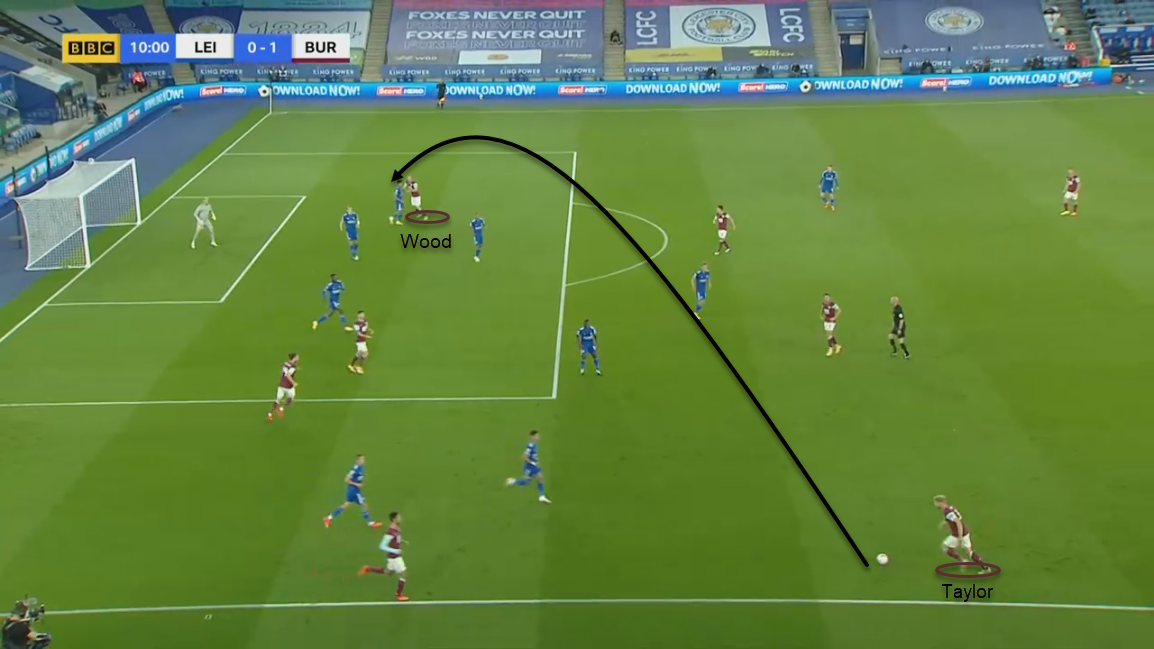 Taylor played a huge part in supplying the crosses (six) from the left. Wood could easily outmuscle Justin and ended up scoring the first goal. Dunne headed the second goal for Burnley. He too contested against Justin to win the header.

Burnley’s three out of five shots on target came from an aerial duel won against Justin. The young full-back seemed like a tactical target of Burnley.

The two goals were certainly not enough for Burnley to take the three points home. Leicester was only concerned with not allowing crosses in the box as they realised the threat soon enough. Mendy and Tielemans helped the full-back and winger to create a 3v2 situation on the flanks. Burnley did show an alternative approach in the game. 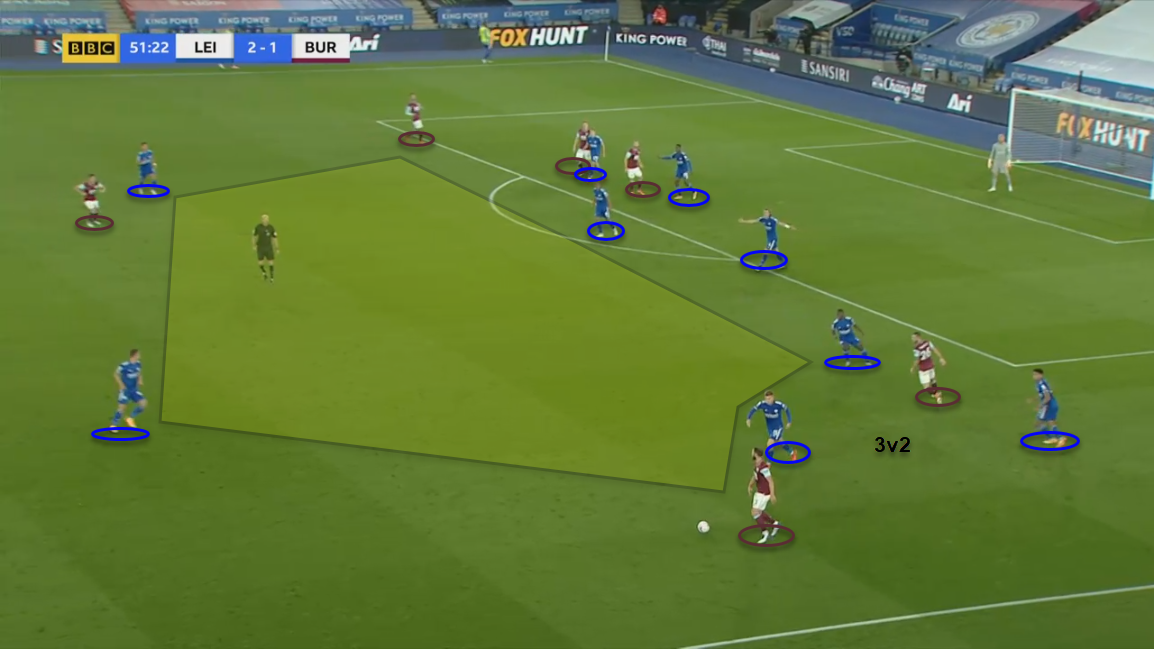 Both strikers waited in the box with a minimum supporting movement to collect the ball. At the same time, Brownhill and Westwood were too reluctant to make penetrating runs and help in the attack. Despite the central space being completely left open in order to protect the wide areas, Burnley showed very little enthusiasm in exploring alternatives.

Bardsley had a conservative game and Brady was injured in the 40th minute. Pieters’s introduction moved McNeil on the right who couldn’t deliver any crosses from his weaker side. Therefore, the right side offered a negligible threat in terms of attack.

Reckoned by Praet’s long-shot goal, Pieters’s own goal, and missed opportunities on Burnley’s behalf, the scoreline is justified when viewed through the lens of xG. Burnley had an xG of 1.85 and Leicester City had an xG of 1.35. Leicester played fluid football with players having the freedom to express. Leicester will have to build on this momentum as they face Arsenal in the EFL Cup and Manchester City in Premier League in the next week.

Burnley lacked leadership and courage in their game-play. The pressing intensity was not uniform and their attack was unidimensional. They started the match with only 12 fit senior outfield players. This situation is alarming and the board needs to back the manager by adding some new faces in the squad. They will be facing Milwall next in the EFL Cup and then Southampton in the Premier League on the weekend.