Week two of the Premier League featured a clash between two newly-promoted clubs from the Championship. Leeds United, which left a good impression in their first game against Liverpool, received Fulham, who debuted losing to Arsenal. It was a poor first half for both sides, with no team being able to outplay the opposite pressing lines. Leeds’ adjustments in their build-up gave them a higher ball possession for the second half, for a deserved victory.

In this tactical analysis, we will analyze how Marcelo Bielsa shifted Leeds’ tactics to outplay Fulham high press. This analysis will also show how Leeds used their man-marking strategy when defending. Finally, we will cover the weaknesses of Leeds’ defensive and transitional style on this game, allowing Fulham to stay on the game. 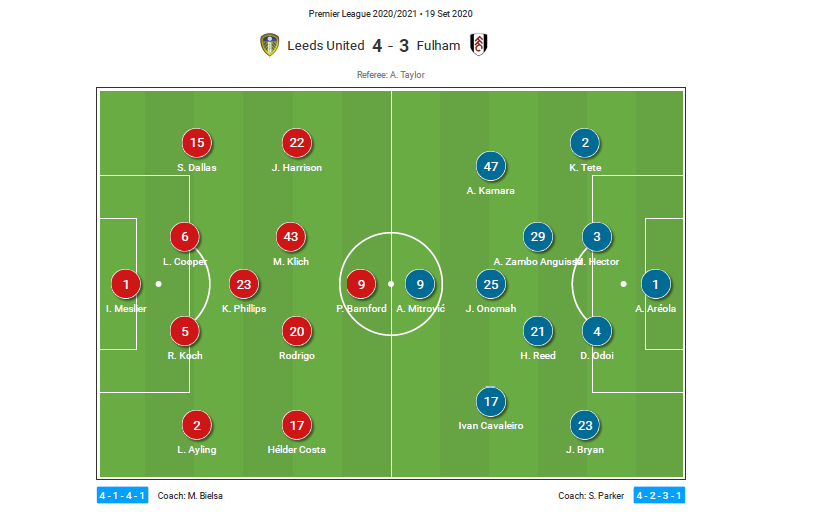 Bielsa made two changes from their first presentation using the same 4-1-4-1 formation. Leeds’ captain Liam Cooper made his return to the starting lineup, pairing Robin Koch as centre-back. The full-back pair kept unchanged with Luke Ayling and Stuart Dallas. The other change was in the midfield with Rodrigo Moreno making his starting debut due to the last-minute injury of Pablo Hernández.

Steve Parker settled a high press, with two pressing lines in a 3-1 structure. The next shot shows this high press. Mitrović started the press when the ball was in-possession of Leeds’ centre-backs, continuing his run into the goalie when they recycled the ball. From behind, the strong-side wing marked the full-back, while the weak-sided wing tucked in to press the other centre-back. Onomah’s role was not conceding any space to the talented English holding midfielder. Fulham ended the game with a 6.4 PPDA, showing the high pressing intensity they used. 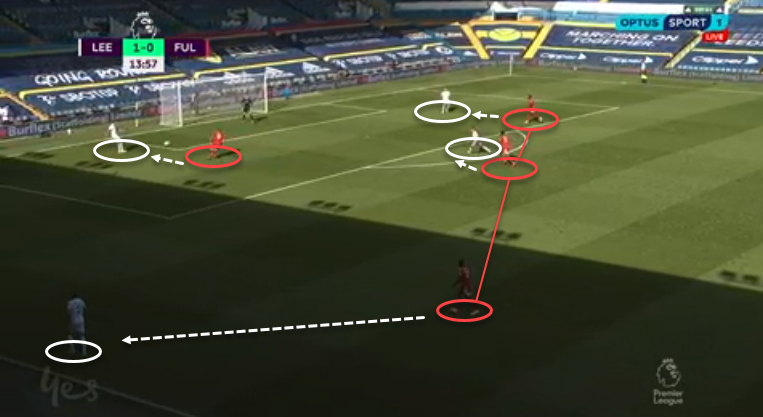 Fulham press kept Bielsa’s team with just 42% of ball possession in the first half. This lack of ball possession was also reflected in their offensive game ending the first half with only 0.16 xG, not considering the penalty. Bielsa read this situation and shifted the way of building up in the second half. First of all, it replaced Rodrigo Moreno by Tyler Roberts, who supported Leeds’ midfield behind Fulham high press. In the next shot, we can see how Preston helped in the right flank, creating a 3v3, with space to play the ball.

Bielsa also shifted the tactics when building up, playing more long balls behind the pressing lines, looking for a numerical or positional superiority in the flanks. Illan Meslier accounted for nine successful passes beyond their defensive third to the sides. This strategy was a win for the Argentinian coach as the fourth goal came from this approach. In the next picture, we can see the long pass played to Jack Harrison, who flicked it on to Patrick Bamford. This 2v1 created in the left flank left the striker in possession of the ball, with space to progress to the final third finding Hélder Costa in his cross. The man-marking press called the attention in the first game of Leeds, and they replicated it on this game with efficiency conceding just 0.13 xG in the first half. In this style of pressing, Bamford is the only one who does not have a fixed opponent to follow. He is the first player pressing, curving his run blocking the pass between the centre-backs. This tactic forced Fulham to one of the sides, making the build-up more predictable. In the next shot, we can see the curved run of the striker, with the rest of Leeds’ second line of pressure man-marking. 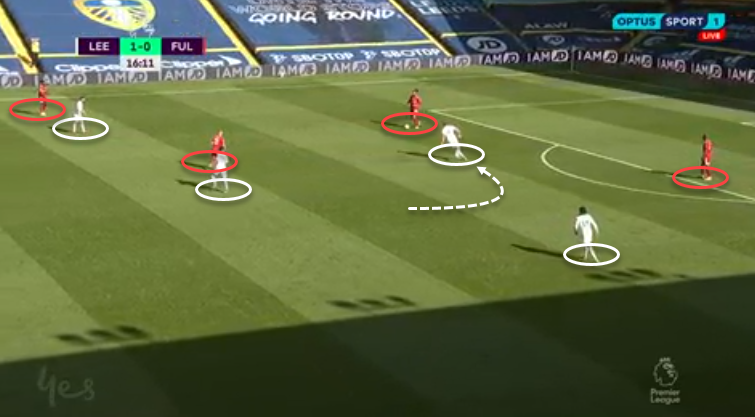 Fulham tried to fix their build-up by dropping both of the holding midfielders deep. Albeit against a man-marking style, this did not give Fulham any benefit as this second holding midfielder was also man-marked. Furthermore, Leeds’ striker role of isolating one of the centre-backs gave the team an extra player in their half. The next shot depicts this extra player in yellow, who provided cover to the defense, with the rest of the team man-marking. 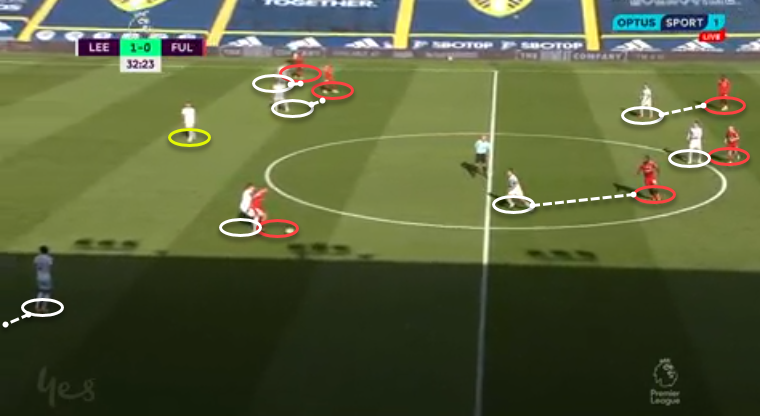 Bielsa’s team keeps their style no matter the context, maintaining their attacking and defending principles throughout the whole game. Leeds kept pressing high, forcing Fulham to play uncomfortable at their back. This strategy becomes risky as fatigue increases. The pros are that this style gave Leeds some opportunities to finish the game, as shown in the next picture. With just five minutes remaining, Leeds pressed with four players creating a defensive overload winning the ball. 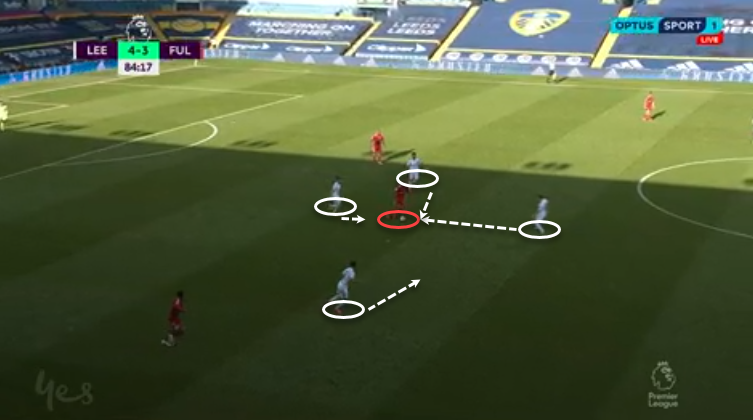 In this section, we are going to analyze which were those weaknesses that kept Fulham in the game. As aforementioned, Leeds’ players follow a mark throughout the pitch on the opposite’ build-up. In this scenario, losing a duel becomes a significant problem for the team. The next picture depicts this weakness in the man-marking style of pressing. The Fulham player outplayed his mark, progressing the ball with ease. There was a vast gap created due to Leeds man-marking following their opposite player throughout the pitch. 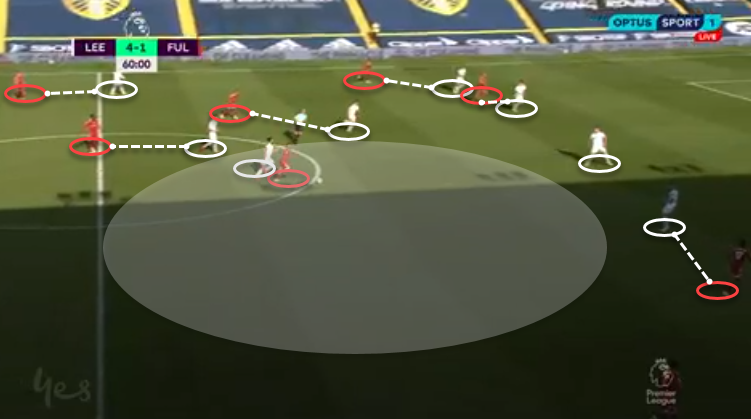 The other weaknesses of Leeds style rely on their defensive transitions. The second and third goals conceded came from counter-attacks in which Fulham transitioned fast, exploiting Leeds’ offensive positioning. Even though Bielsa focused on a quick transition to recover the ball as soon as possible, we saw a deficient rest-defense. The next picture shows this deficiency; when Fulham recovered the ball in the central channel, the defensive line was 1v1. Fulham scored as the centre-back committed to the ball carrier, leaving his mark free. 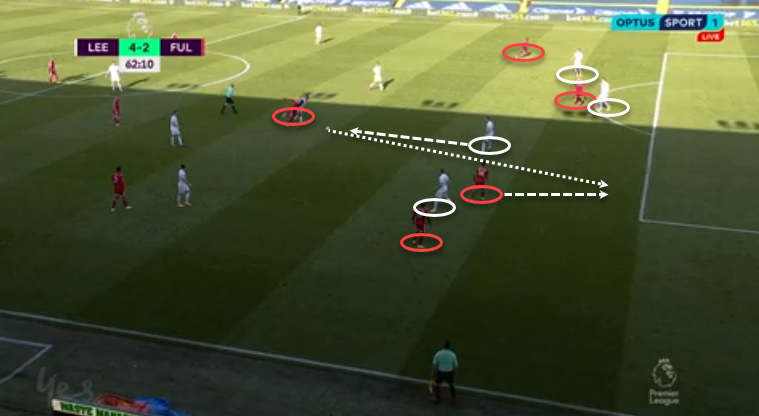 The third goal was also a counter-attack, as shown in the next picture. Even though Leeds had a rest-defense of four players against the front two of Fulham, they outplayed the centre-backs in a one-two combination. The full-backs, who were positioned wide due to their offensive roles, didn’t arrive at the central channel to give cover to the 2v2 created. Fulham was able to progress the ball to the final third and scored from a cross. 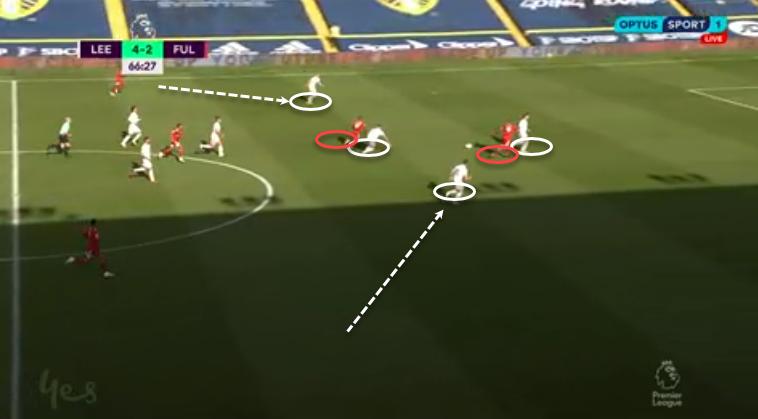 These were the first three points earned by the newly promoted Leeds in the Premier League. Their style is calling the attention of many and adds a different flavor to this season. The likes of Jurgen Klopp and Pep Guardiola adapted their philosophy to the Premier League, becoming more conservative when winning; maybe this should be something Leeds should do to maintain the score.

Fulham’s best version was on their first half when they disrupted Leeds’ build-up using a high press. Apart from their counter-attacks, we have not seen many from their in-possession game. Porter needs to work on the attacking phase urgently if they want to start earning some point in this season.