After a convincing win against Cádiz in their opening La Liga fixture, Osasuna traveled to Madrid to face José Bordalás’ Getafe. Getafe, after finishing eighth despite looking good to grab at the UEFA Champions League spot until February, looked to re-organise things with their first fixture of the season. Jagoba Arraste’s side, despite having the momentum coming into this match, fell narrowly by a goal at Coliseum Alfonso Pérez with a well-executed Jaime Mata goal.

In this tactical analysis of Getafe vs. Osasuna, we’ll look at how the sides lined up, how Getafe executed their tactics very well yet again. In addition, the analysis will also focus on how the teams’ pressing strategies made a significant difference in the way both the teams played. 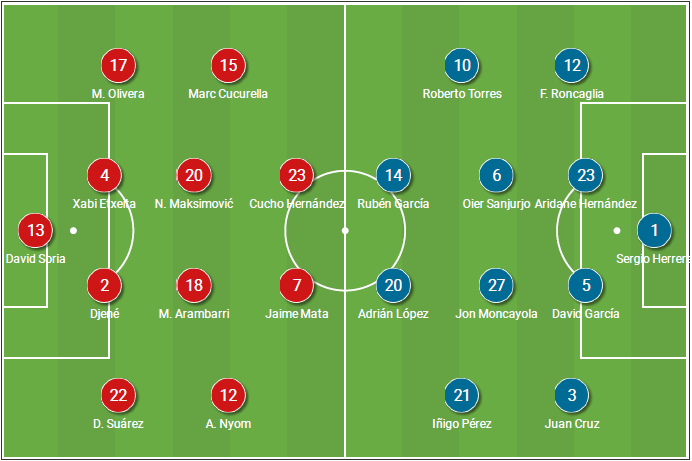 Both Arraste and Bordalás’ sides lined-up in a 4-4-2 in papers. However, Getafe’s lineup favored a flat 4-4-2, with Jamie Mata and Cucho Hernández being the two target men up front. Hernández, on loan from EPL side Watford, partnered with Mata in place of Jorge Molina, who departed to Granada this summer. As expected, Marc Cucurella and Allan Nyom started as the wide players who were given freedom to invert whenever required.

On the other hand, Osasuna’s shape rather looked like a 4-4-1-1, as Rubén García played slightly behind Adrián López to connect the four man midfield with the striker. The only change for Arraste’s side was the inclusion of Facundo Roncaglia in place of Nacho Vidal.

Displaying José Bordalás’ love of building up with long balls and zonal overloads, Getafe created superiority at wider parts of the pitch. To break multiple lines, Getafe attempted to capitalise the overload by long balls directly from the back. 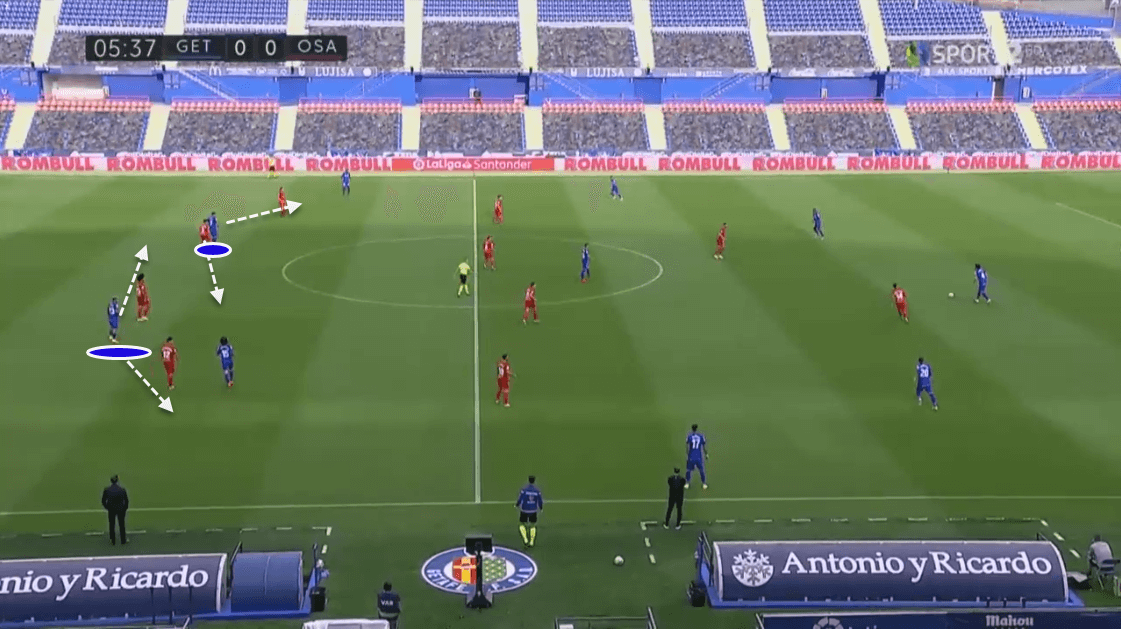 In a relatively more organised setup compared to Osasuna’s shape, Getafe tried to supplement the wide players with central players to achieve superiority. Like the figure shows, two central strikers (or other players in a similar position) were positioned so that they can move both ways horizontally. With this approach, slight movement of players put Getafe in advantage during aerial duels. A classic example of this approach appears in the instance above. While the goalkeeper, David Soria attempts to deliver a long ball at the right side, players are already seen creating a numerical overhaul in that zone of the pitch. Damián Suárez (marked number three) places himself inside the space, which creates a 3v2 situation in left hand side of the pitch. With players that are comfortable winning aerial balls, Getafe tried to play to their strengths. If we examine the situation, a summary of Getafe’s tactics under José Bordalás can be seen. Wide overloads, not taking much risk by attempting to break lines using long balls to target the target men upfront and utilisation of aerial strength were quite frequent. The above instance shows the same, as Cucurella tugs in to help Hernández and Nyom does the same to help Mata, the full-backs are already seen advancing towards the wide side. What this movement meant for Getafe was that their attempt of creating overloads and yet allowing their target men to be upfront was quite successful. 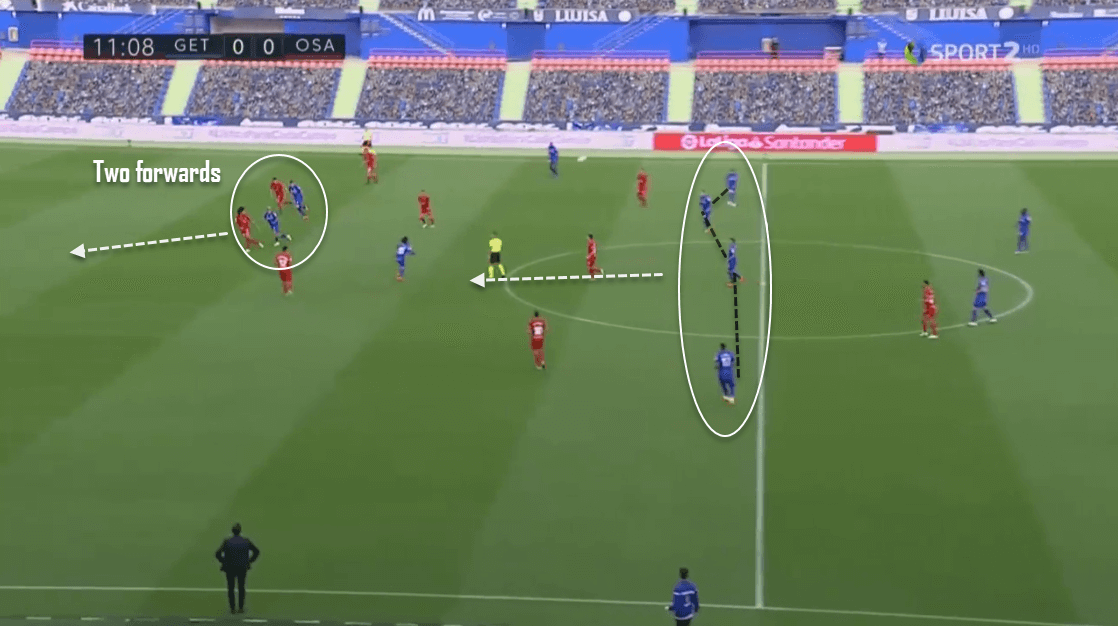 As Cucurella receives the ball from a goal kick in this occasion, two forwards are seen making runs towards the front. In instances like these, the four players seen pushing in front, were vital in providing passing support and aerial support for the receiving players. Since Osasuna were not able to contain Getafe’s wide attacks and tried to defend without much mobility in the back, the central space was also open for Getafe to land their long balls.

Zonal overloads forced Osasuna to cover spaces towards the direction of play, which opened wide options for Getafe on the other side of the pitch. As a team that’s comfortable with both playing and receiving balls, the switch of play was based on long balls rather than using central players. This made things smoother for Getafe, as wide players got enough space to be comfortable with the ball. 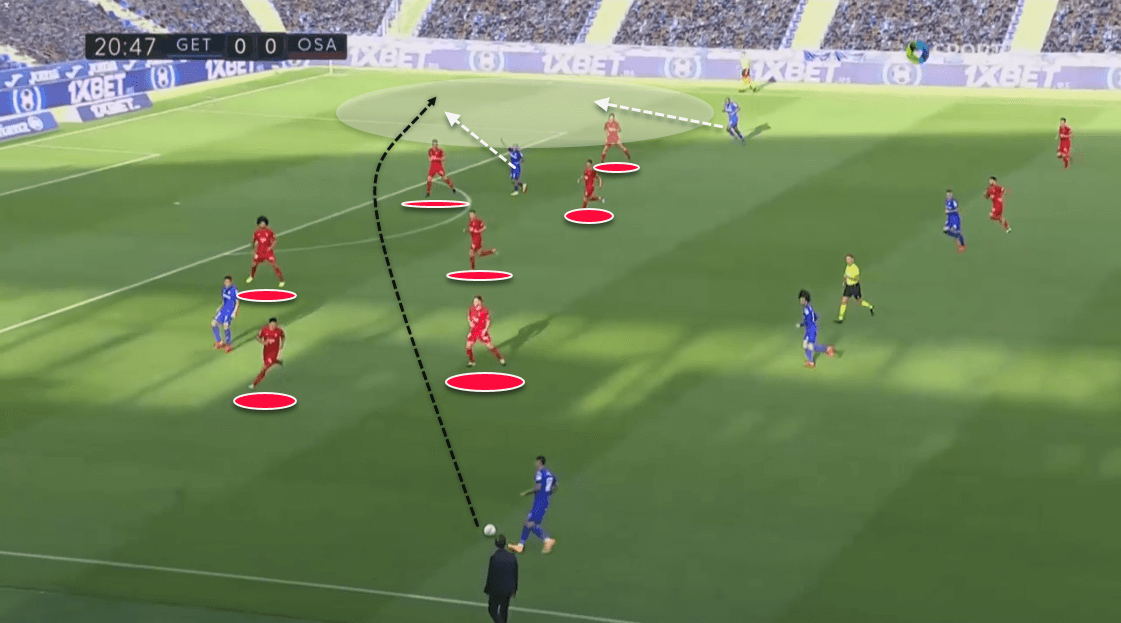 Osasuna, a team that based their victory last week on wide presence, struggled to progress from the wide areas due to chunks of overhaul that were formed all around the pitch. As we can see in the instance above, Osasuna look trapped, as another possible overhaul is being formed at their blindside.

Osasuna’s quest for space and pressing

Despite Getafe’s overhaul being dominant, this approach also made them vulnerable at times. Overhauling creates voids in moving player’s position, and Osasuna tried to play in those spaces in their build-up. Getafe are a team that do not press relentlessly and follow the opposing goalkeeper, but use their press to outnumber their opponents. However, as we can see in the example above, they can leave acres of space behind and any team that can play into spaces can punish their approach.

Osasuna also tried to capitalise this. With three players in the right, all free and unmarked, a long ball can comfortably trigger a combined attack. Attempting to do that, the central defender with the ball passes on to the pocket of space that’s seen. 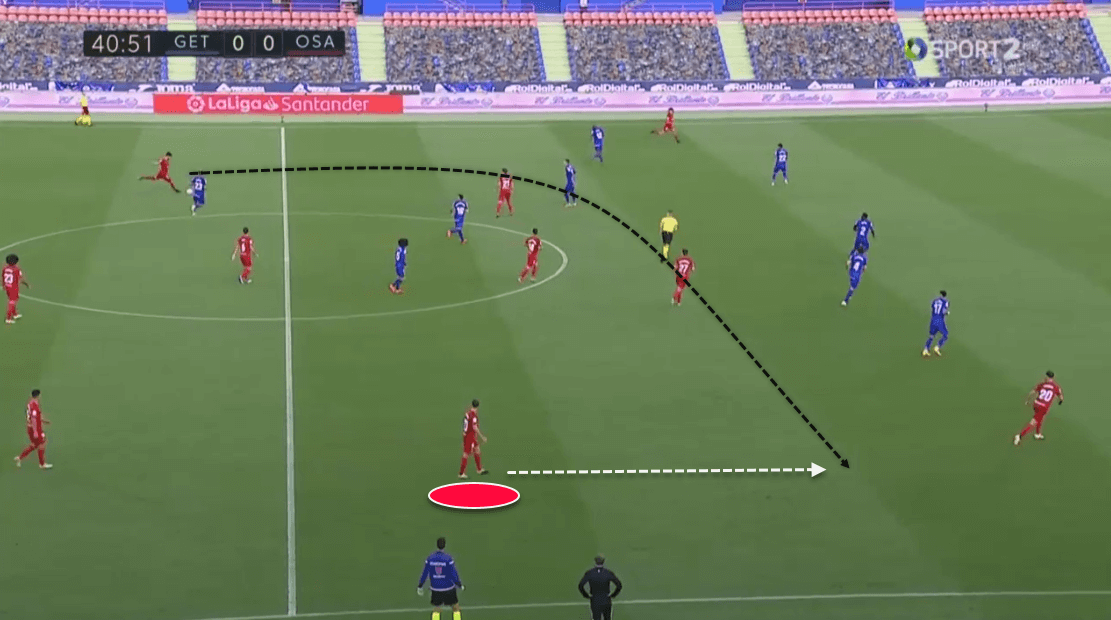 We can already see Getafe’s defensive line preparing to trackback, whereas the midfielder is still left vacant. Although Osasuna managed to find spaces like these in several occasions, poor execution and Getafe’s ability to quickly regroup in a compact shape made things harder for the traveling side.

Osasuna’s attempts to create spaces for themselves and limiting spaces for their opponents was visible when they pressed as well. Since Getafe decided to go for an aerial approach, the side tried to limit any run in space to avoid quick transition. 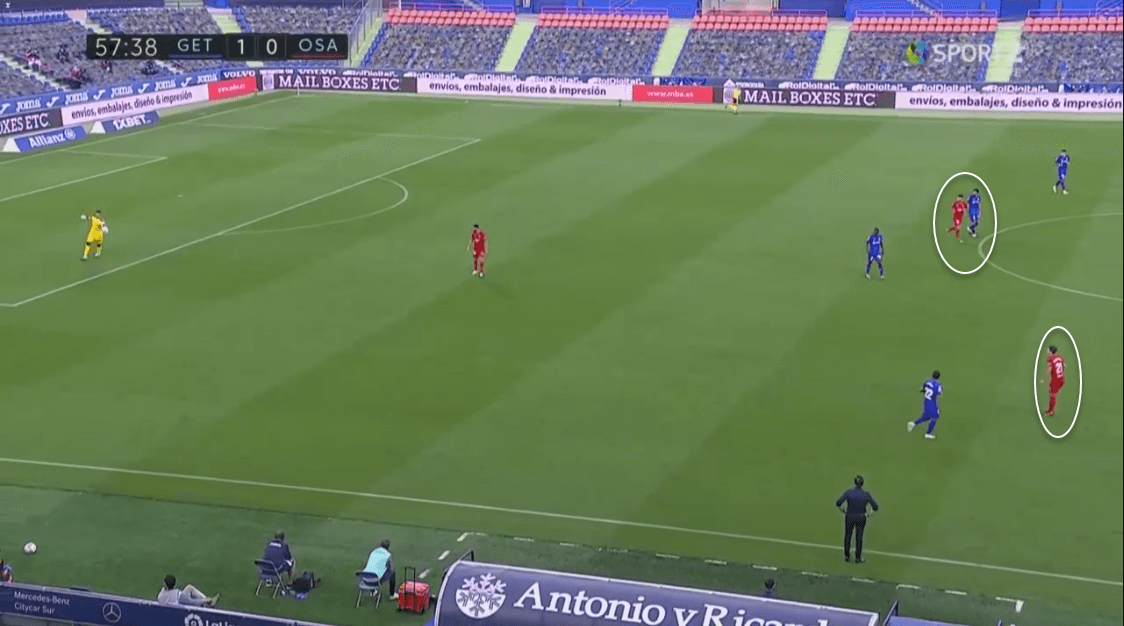 Although the 4-4-1-1 somehow put hindrances to this approach, they were able to limit spaces for Getafe’s players to get involved in winning the aerial balls. As we can see, with only one player ahead to capitalise on any goalkeeper’s error, the two other players drop to limit space for Getafe in the centre. The same approach showed up on other occasions as well. Here, the process starts with a forward tracking a wide run whereas the other one covering up for his moment while covering the wide-left player with his shadow. Although a long ball is inevitable in this case, the approach seems suited to limit space for the opponent and create spaces for themselves.

Playing with a flat 4-4-2 can seem pragmatic, but Getafe were able to tweak it with their central movements. During the press, they maintain a mid-block and limit the space between first line and the defence. This not only brings compactness but enables them to limit any player that is looking to advance into dangerous areas. 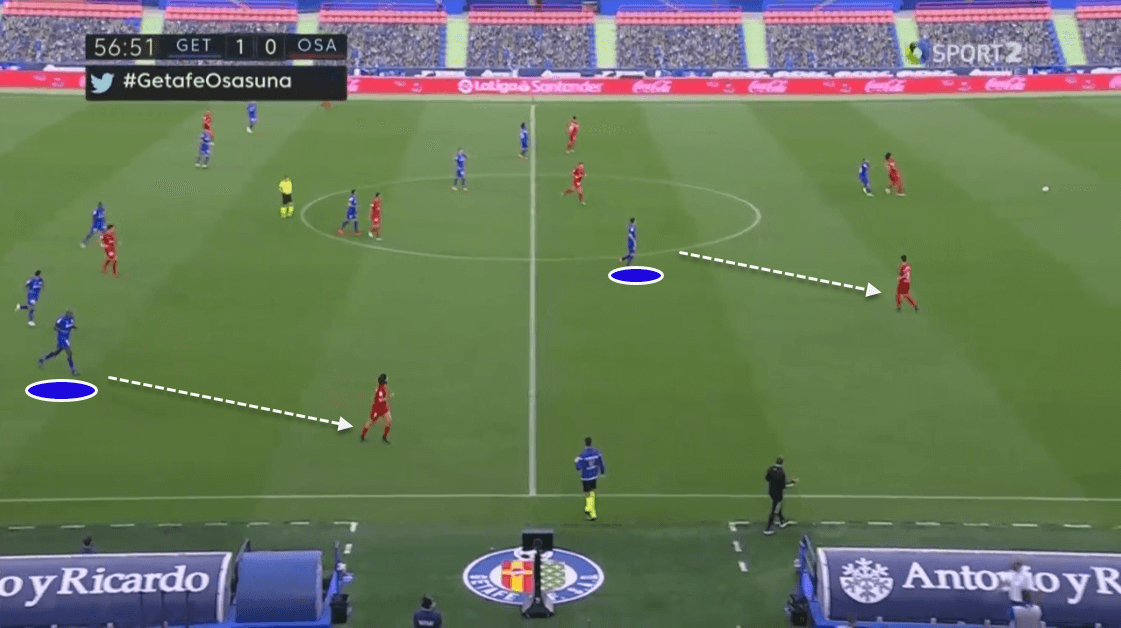 The above instances shows a common trait in Getafe’s pressing. The first line, consisting of two forwards are assigned to press whenever the opposition’s defensive line is high. Getafe tried to maintain their control over the compactness, which is why they preferred not to press deep when Osasuna tried to build from back. What they did, instead, was made sure the advancing channels are properly covered and Osasuna have limited ways to progress forward. 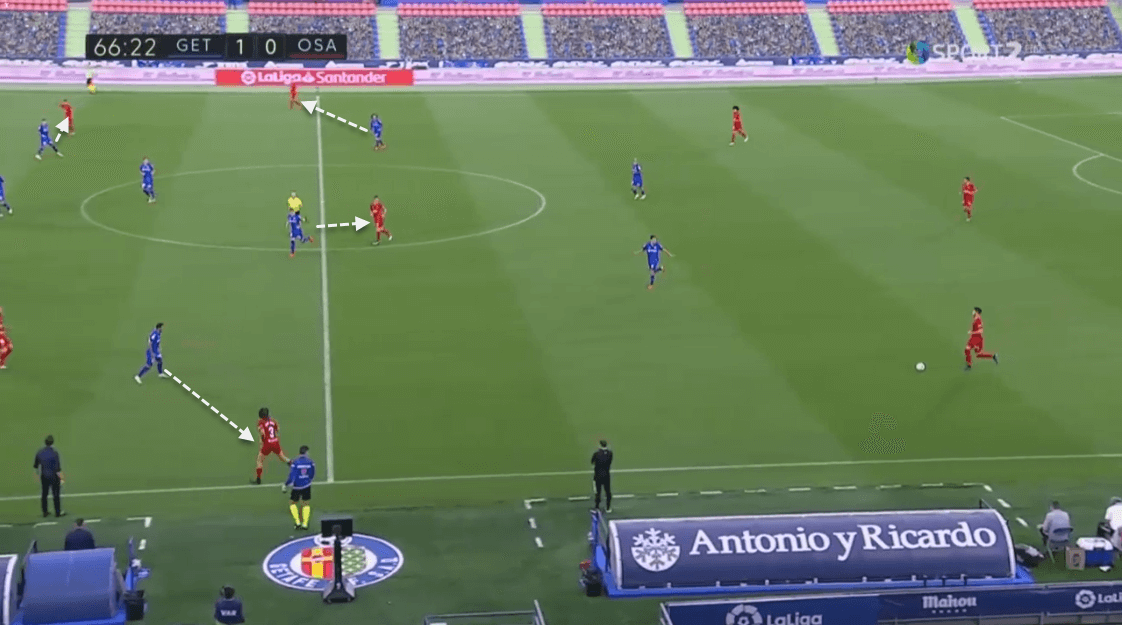 Like we can see, absolute freedom is provided to the back three, and Getafe only tend to press when they really feel it’s required. Although the interchanging is free between the back three, players pressing the other seven players made sure other players have to surpass them if they are to advance. In addition, their ability to create 2v1 situations added to this trait. 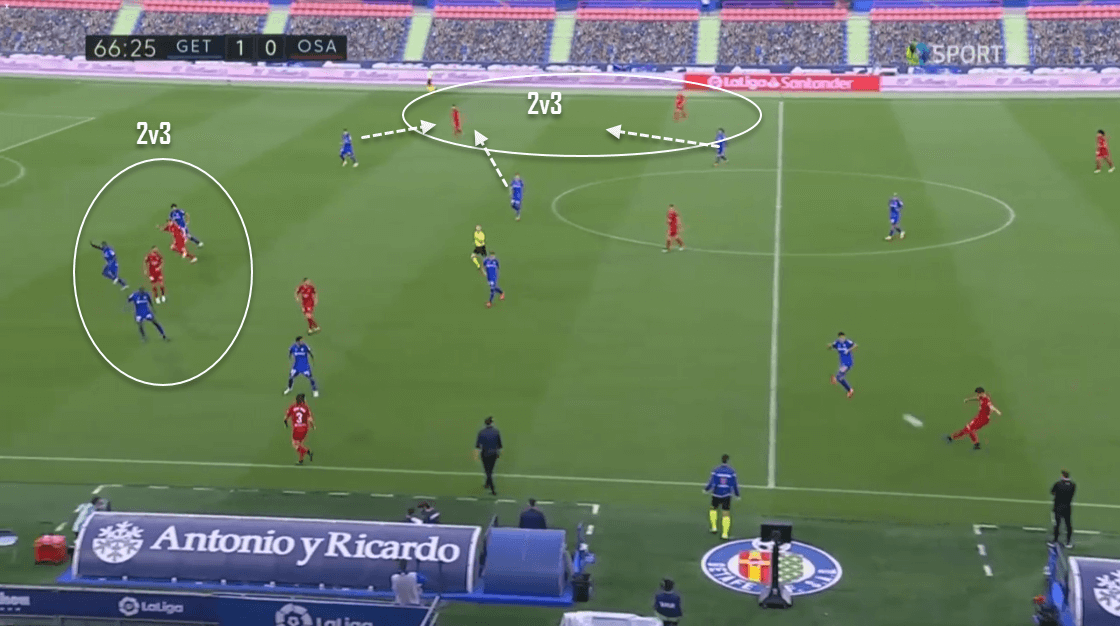 Like we pointed out above, the same situation happens. When Osasuna try to find space up front by planting a ball from the top, Getafe’s compactness comes to play. As players are not too distant from each other between the lines, Getafe are able to create 2v3 situations. There are two possibilities of that happening here, and this makes sure Getafe’s defensive shape was not hindered. Hence, the use of limited but smart pressing was on display and, worked properly like it usually does for Getafe.

As the score line suggests, there was not much technical gameplay visible during the course. However, this can be documented as yet another example of a successful Getafe win, as they managed to strangle Osasuna and made them follow their lead.