After drawing with Huesca on the opening day, Villarreal were out to find form in La Liga after a summer of change. New coach Unai Emery is expected to press on to challenge for Champions League qualification this season, but Eibar came to town to provide a challenge in matchday two of La Liga’s 2020/21 season.

Villarreal had to come from behind again to beat Eibar, this time going one further and securing all three points. Kike García gave Eibar the lead, only for Gerard Moreno to score one and assist another as Emery stuck to his guns.

This tactical analysis will consider how former Arsenal boss Emery used tactics to overcome Eibar’s José Luis Mendilibar in this La Liga clash. The analysis will look at how both coaches approached the tie. 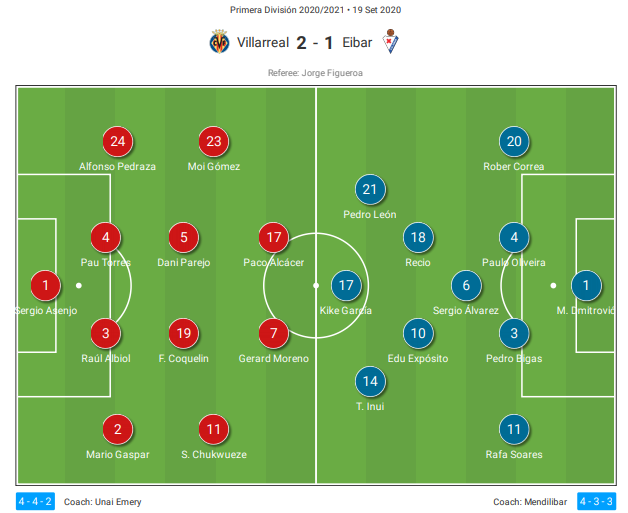 Villarreal made just one change, with Mario Gaspar replacing the injured Rubén Peña, though new signing Pervis Estupiñán was on the bench and would come on to play the final half an hour of action. Fielding an asymmetrical 4-4-2, the shape of this midfield would be crucial.

Eibar also changed one player as Recio came into midfield as Mendilibar sacrificed Sergi Enrich from the attack, instead adding more midfield stability to do battle with the experienced duo in Villarreal’s midfield. Rafa Soares came into the team too, as Pedro Bigas moved central with Sergio Alvárez stepping forward as Pape Diop serves his suspension.

Right from the very first whistle, Eibar looked to press intensely. In the first five minutes of action, Eibar had already made five interceptions, four of them coming in the Villarreal half. As can be seen here, Eibar had every single Villarreal player in their own half covered. They would force the defenders to spread the ball quickly to another man who was already marked or being closed down. This unsettled Villarreal, already clearly nervous from the disappointing opening day draw against a newly promoted side.

This was particularly important against a side like Villarreal as Emery does encourage them to play out from the back. The challenge with this approach comes in that the likes of Pau Torres are often guilty of playing a long ball when under pressure. This would explain why Villarreal produced such a high number of long passes that it has only been beaten once since February, with Eibar pressing them into taking risks and playing balls to try and catch out the Eibar defence with the line having pushed so high up to support the press.

Eibar sustained this approach for much of the tie, perhaps too much. Later on in the tie, their desire to continue to press high more often than not meant that there was greater space between the lines for Villarreal to exploit. This will be touched upon later in the analysis. Eibar could well have fared better had they resorted to sitting deeper into a lower block and denied them greater space. While chasing the game, Eibar’s approach forced a nervous Villarreal to gamble in possession. When they had the lead, Villarreal were happy to invite the pressure to try and create greater spaces for offensive players to exploit.

Villarreal’s vulnerability on the counter

Despite the high press, Villarreal were not willing to sit deep and absorb the pressure. Instead, they looked to take advantage of an asymmetrical midfield set-up. Both full-backs pressed high, particularly on the left through Alfonso Pedraza and later Estupiñán. However, this left them vulnerable on the counter. While Francis Coquelin would sit a little deeper in midfield to add an extra layer of protection, he would often not position himself deep enough to act as a third central defender and would be found chasing play just as much as anyone else.

Eibar are specialists of breaking on the counter-attack quickly and would turn the ball over efficiently. Led by Takashi Inui in all three of Eibar’s counter-attacks, including the one leading to Kike García’s opening goal. The speed in which they turn play through was particularly impressive, especially in this example below when the side were already leading on the hour mark.

Eibar were not afraid to throw men forward and as soon as Inui wins the ball in midfield, three players make the run. Edu Expósito, Kike García and Pedro León supported Inui, starting in more advanced positions and deliberately looking to stretch the defence by running into wide areas with Kike García pushing the last man to buy Inui greater space to run into through the middle.

In the end, it would be a poor pass from Inui that would let the move down. Rather than feeding through in this four on three situation, Inui’s pass was sloppy and rushed, showing how he was tiring and made the decision rashly, rather than taking another touch and allowing Expósito greater space to run into down the left to play a through ball, rather than getting it caught up and allowing an interception to be made. Still, Villarreal were lucky to benefit from a sloppy and tiring attacker, rather than through protecting themselves sufficiently in defence.

Sticking to the game plan

What was most impressive from Emery and Villarreal in their approach was the way in which they stuck to their guns and maintained their tactics. In midfield, whereas Samuel Chukwueze would bomb down the flank and stick wide on the right, Moi Gómez on the left would drift inside and operate almost as a third central midfielder. This was important as it allowed Dani Parejo to move further forward and support the front two. This manoeuvre became more and more frequent as the tie went on and as Villarreal looked to be more offensive.

This alone was not sufficient to link the midfield and attack and as such, Gerard Moreno began to drop into deeper positions to connect the two lines between them. This was what would eventually make the difference and would be particularly important in the build-up to Villarreal’s second goal. The combination of both Parejo and Moreno’s movement would drag Eibar’s defensive and midfield lines all over the place, generating space for others to exploit.

Here, as Gómez moves inside, Estupiñán can move wide down the left to keep Roberto Correa pinned out wide. Parejo’s movement would take Alvárez and Recio with him, meaning that when Moreno dropped into space, he would be left wide open as Inui failed to track back sufficiently. This left Pedro Bigas with a difficult decision to make and in the end, he would step forward to close down the Villarreal centre-forward.

In doing so, that allowed a space to be opened up in behind him which Paco Alcácer could exploit. Moreno was quick to take one touch to invite Bigas to continue to press before playing Alcácer in behind with a quick pass into the space behind Eibar’s high line. The approach was made to exploit this high line and generate spaces, but could only be truly effective should Eibar be slow to track back or should Parejo be able to occupy several players with his runs. In this movement, both of those cases come to fruition and Moreno and Alcácer were able to take advantage.

Eibar should not be downhearted from this defeat. Post-match, Mendilibar said that his team had played “without fear” and that was most certainly the case. Their desire to press high, with a high defensive line, is admirable for their determination, but perhaps not wise. Having taken the lead, it left them vulnerable to frequent attacks from Villarreal who were intelligent enough to create movement which would generate great spaces for them to attack in the final third. The role of their midfield runners, Parejo and Gómez, cannot be underestimated in making this approach a success.

However, Villarreal did have some defensive vulnerabilities. Without the protective defensive layer from the midfield, who were busy trying to exploit those spaces, they were too often caught out on the counter. Next up for Villarreal will be a visit to Camp Nou to face Barcelona. Such weaknesses and vulnerabilities would be exploited far more clinically. With this in mind, Parejo and Coquelin will have to be far more disciplined and sit in a deeper role, allowing Gómez to cut inside but perhaps without the forward run from Parejo.

Overall, this performance was a clear step up from both teams from their opening games. Eibar put up a strong fight and will feel confident that they can pick up more points with their brave aggressive press. Villarreal will take confidence in particular from the fluidity of their movement in a side which included three key players who weren’t with the club last season.