When the Belgian Pro League fixtures for matchday six were released, few would have expected that Sporting Charleroi against Beerschot would have been a top of the table clash. However, Charleroi have been the pick of the teams so far this year, having beaten the likes of last year’s champions Club Brugge on their way to five wins out of five prior to this game. Newly promoted Beerschot, who have links to EPL side Sheffield United, had won four and lost one game before travelling to the table toppers.

It was Charleroi who made it six wins out of six with a 3-1 victory, and they look set to push for a UEFA Champions League spot at the very least this season. Beerschot, on the other hand, will still be able to take plenty of positives away from the first six matchdays, as they look more than capable of competing with most teams in the league. 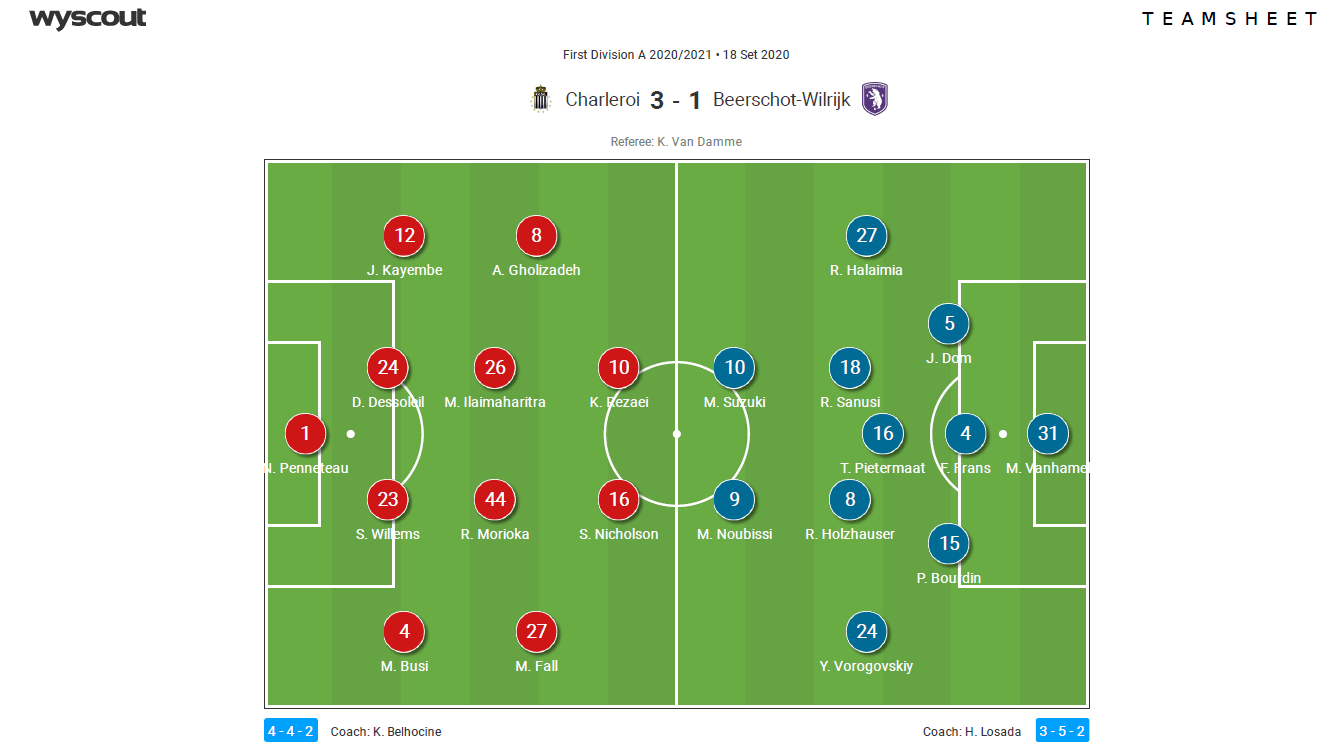 Home side Charleroi went for a 4-4-2 formation, with experienced keeper Nicolas Penneteau between the sticks. Joris Kayembe, one of the standout players for Charleroi this season, was at left-back, with Maxime Busi at right-back. The defensive partnership in the middle was Dorian Dessoleil and Steeven Willems. In front of them were the pair of Marco Ilaimaharitra and Ryota Morioka, with Mamadou Fall on the right and Ali Gholidzeh on the left. Last season’s top scorer Kaveh Rezaei partnered Shamar Nicholson upfront.

Beerschot stuck with their 3-5-2 formation, with Mike Vanhamel in goal. The back three was made up of Pierre Bourdin, Joren Dom and Frederic Frans. Reda Halaimia was the right wing-back, with Yan Vorogovskiy on the opposite side. Tom Pietermaat and Ryan Sanusi were playing alongside Beerschots talisman Raphael Holzhauser, who is the joint top scorer and assist provider in the league so far. Japanese international Musashi Suzuki got his first start upfront alongside Marius Noubissi.

When facing Beerschot this season, keeping Holzhauser quiet is key to having any chance. He is a difficult man for defences to deal with, because he is given a free role by head coach Hernan Losada. The Austrian is allowed to drift in and out of spaces on the left hand side, sometimes dropping deep into his own half, other times being right up next to the forwards.

From the first minutes, it was clear that Holzhauser was someone that Charleroi coach Karim Belhocine wanted to ensure was not given space to be the main playmaker for Beerschot. They looked to deny him the ball where possible in their own half, while being happy to let him have the ball in Beerschot’s half, as they trusted their organisation to limit his potential to pass through them.

For example, we see below in the 18th minute how Charleroi have forced him deeper to get on the ball, while also pressing him enough to make him have to look backwards to the centre-back, instead of being able to play forward like he would prefer. 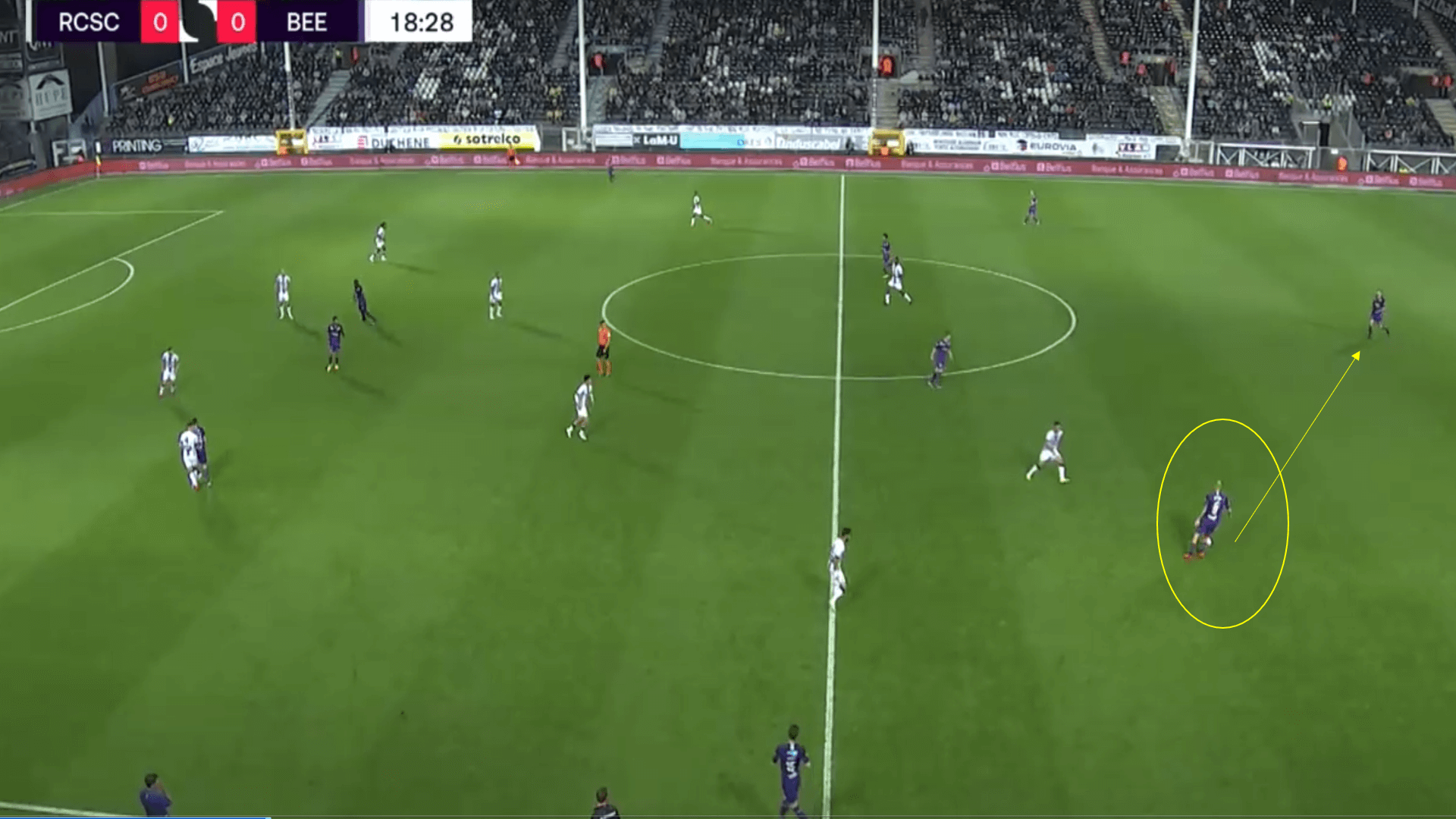 Looking at the Wyscout data, we see that Holzhauser ended the game with a 0.01 xG and a 0.11 xA. These are impressive numbers from a Charleroi standpoint, when we consider how easily the Austrian has been able to score and assist against most Pro League teams this season. Holding him to only one shot all game is also a testament to the game plan of Belhocine, and how well his players executed it.

Another way in which Charleroi aimed to limit the influence of Holzhauser was to force Beerschot into going long from their goalkeeper. Rather than allowing the away side to build the play up and get the ball into their playmaker’s feet, they wanted them to go direct to their two strikers, who had an aerial disadvantage. When we look at the data, we see that Charleroi won 65% of their aerial duels, compared to Beerschot’s 33%.

In the first half especially, this was effective, as the front two strikers were able to split the back three defenders, as we see below. The wingers were then able to support them by splitting between the central midfielders and the wing-backs of Beerschot, meaning that the only option was to go direct and play into Charleroi’s hands. 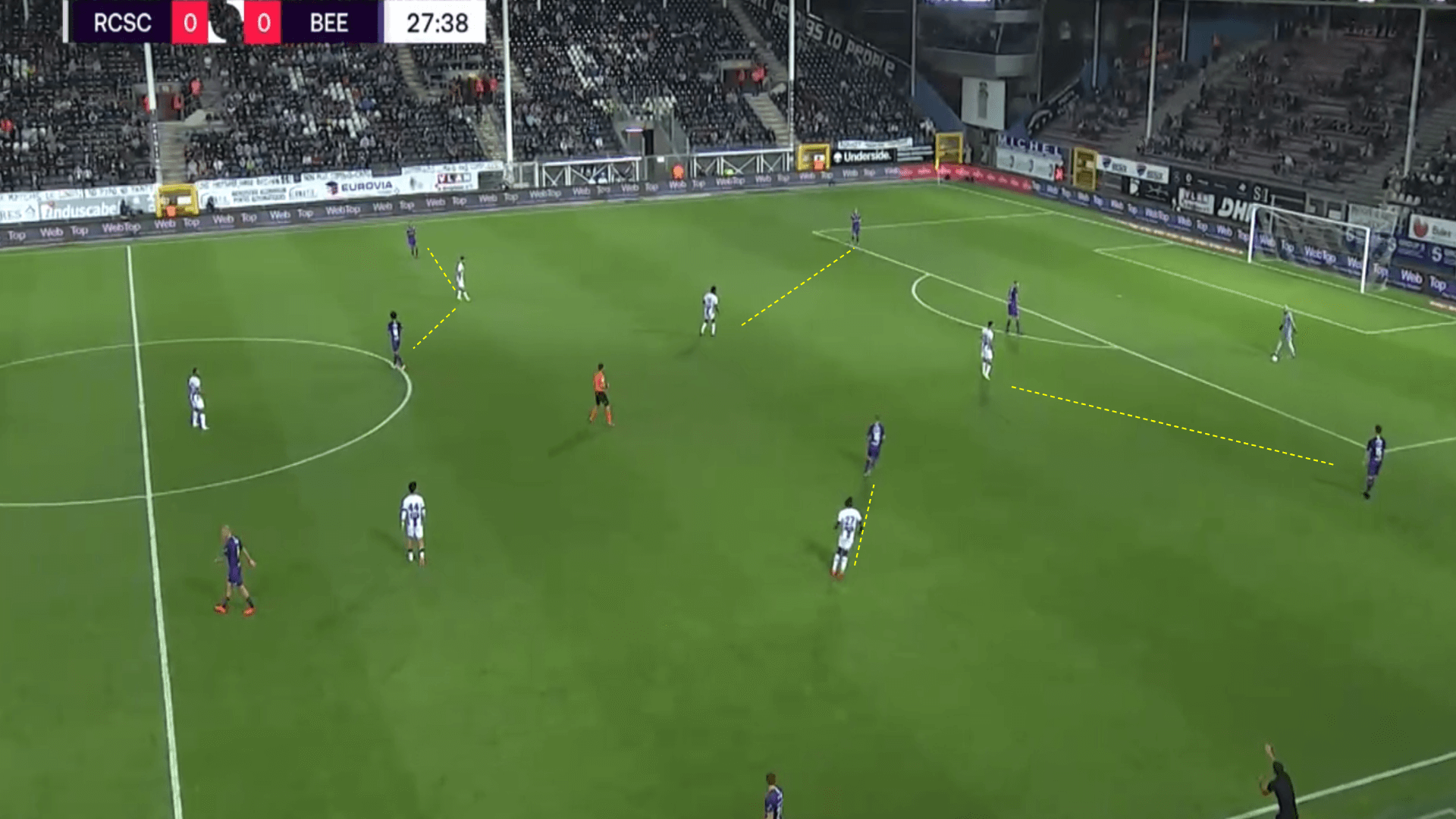 While Beerschot may not have wanted to go direct, this wasn’t the same for the home side. With two physical strikers, Charleroi were looking to be direct in their attacking playing style. Both Nicholson and Rezaei are able to win headers and hold the ball up, which allows the wingers to push forward. Both wingers are powerful runners with the ball, who also like to get physical. This allowed the hosts to play an inside out game, whereby they could get the ball into their strikers before spreading it wide to the rampaging wingers.

Wyscout data backs up what appeared to be happening on the pitch, with Charleroi having 12% of the long pass share percentage overall, with 14% in the first half. Both strikers were also willing to run in behind the Beerschot defenders, meaning that they constantly had to be watched by the three central players of the away side. 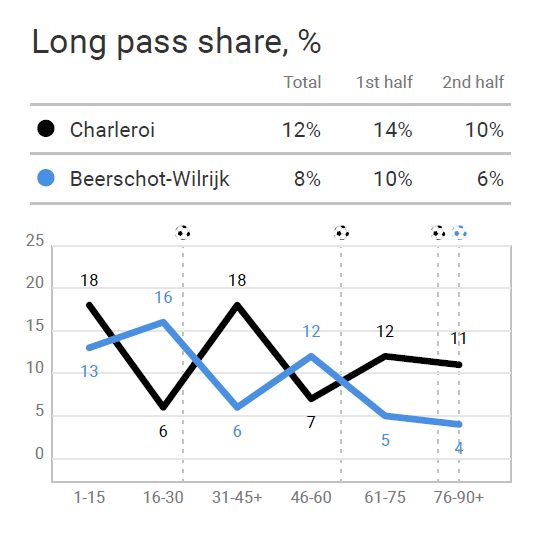 We see an example of the effectiveness of this direct approach straight from a free kick, deep in Charleroi’s half. They look to hit Rezaei, who has shifted onto the right sided defender of Beerschot’s back three. Gholidzeh is now free, as Beerschot’s midfielders and wing-back have not tracked him. 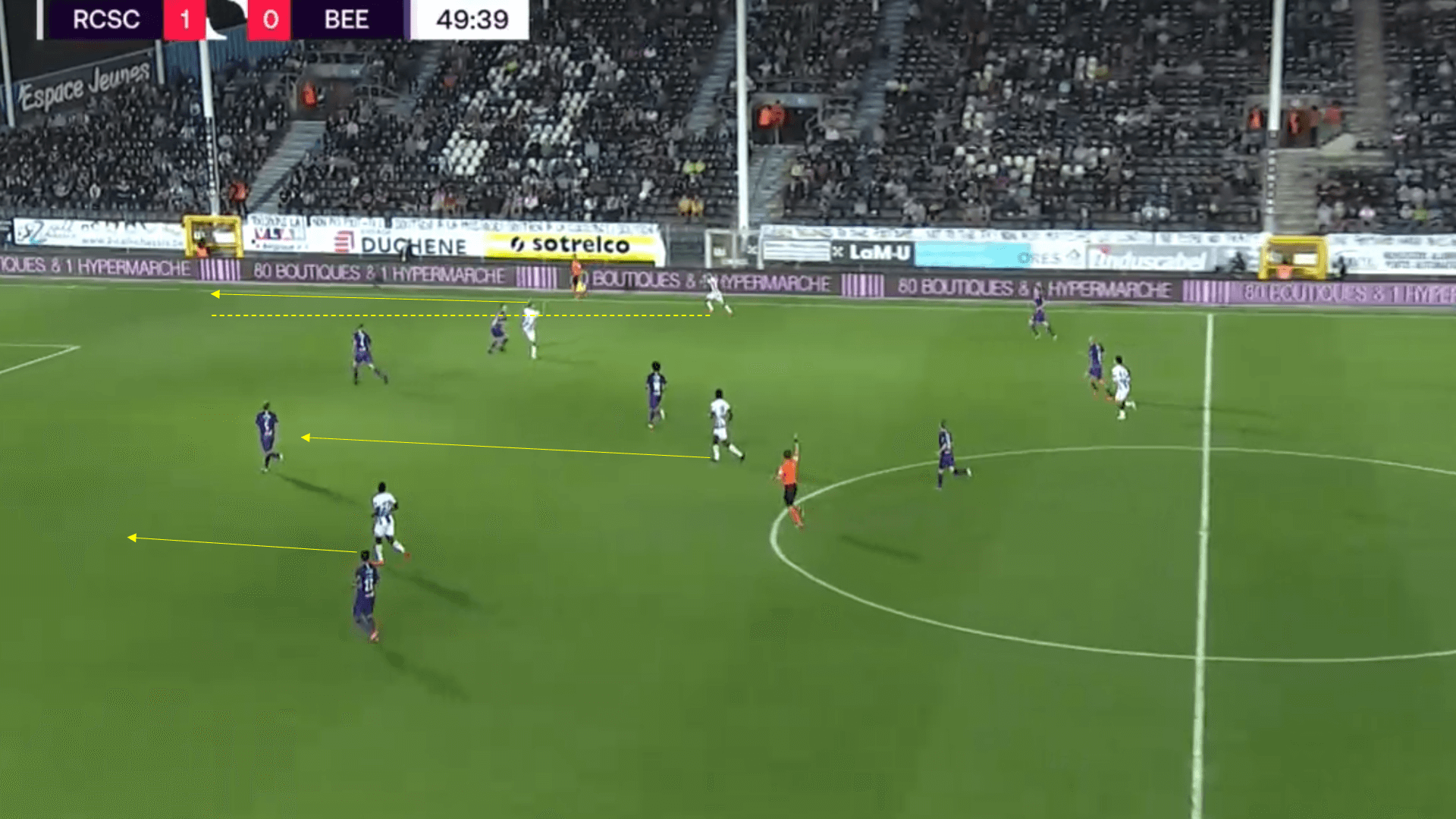 Gholidzeh is able to get a cross in towards Fall, who has come in off his wing to attack the ball. We also saw how deep Nicholson was in the image above, compared to now, where he is also getting in the box. Both Nicholson and Rezaei constantly changed who went to win the flick on, causing confusion in the back line. Neither stuck to a particular side while attacking, instead opting to constantly interchange. While the cross ultimately ends in a Fall header over the bar, it was an example of how effective the tactics of Charleroi were. 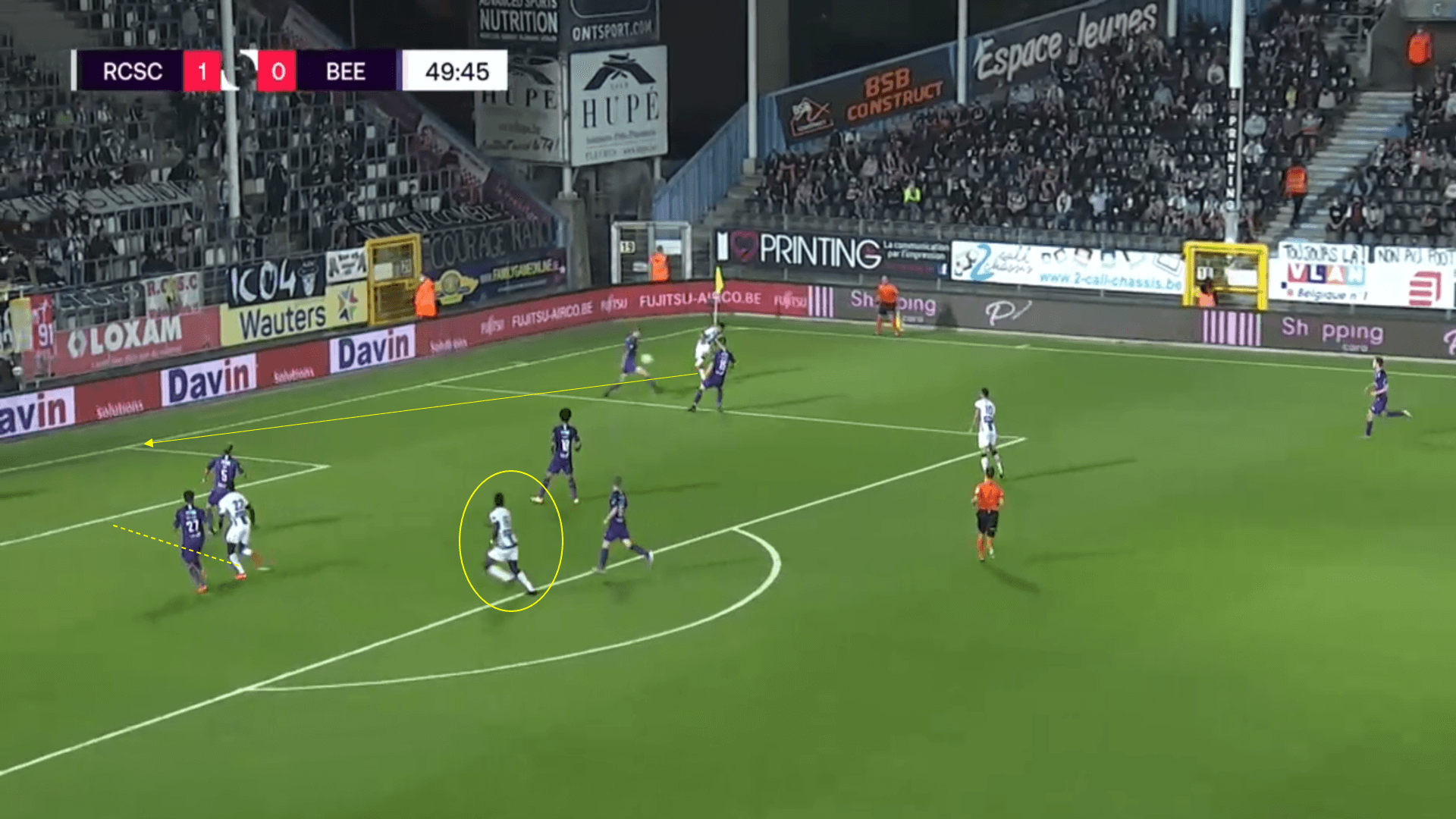 Fall and Gholidzeh getting into the box was a constant theme in the game, and while it was not from the above passages of play, they were involved in all three goals that Charleroi scored in this game.

While both Charleroi strikers were occupying the three central defenders of Beerschot, the wingers’ willingness to push forward meant that the away side’s full-backs and central midfielders needed to help cover. This allowed both Kayembe and Busi to really stretch the pitch and get forward, which they were happy to do at every opportunity.

As we see below, Kayembe is as wide as he possibly could be on the left, while Busi is the same on the right. The strikers and wingers for Charleroi have almost created a front four, which is why Kayembe has as much space as he does. 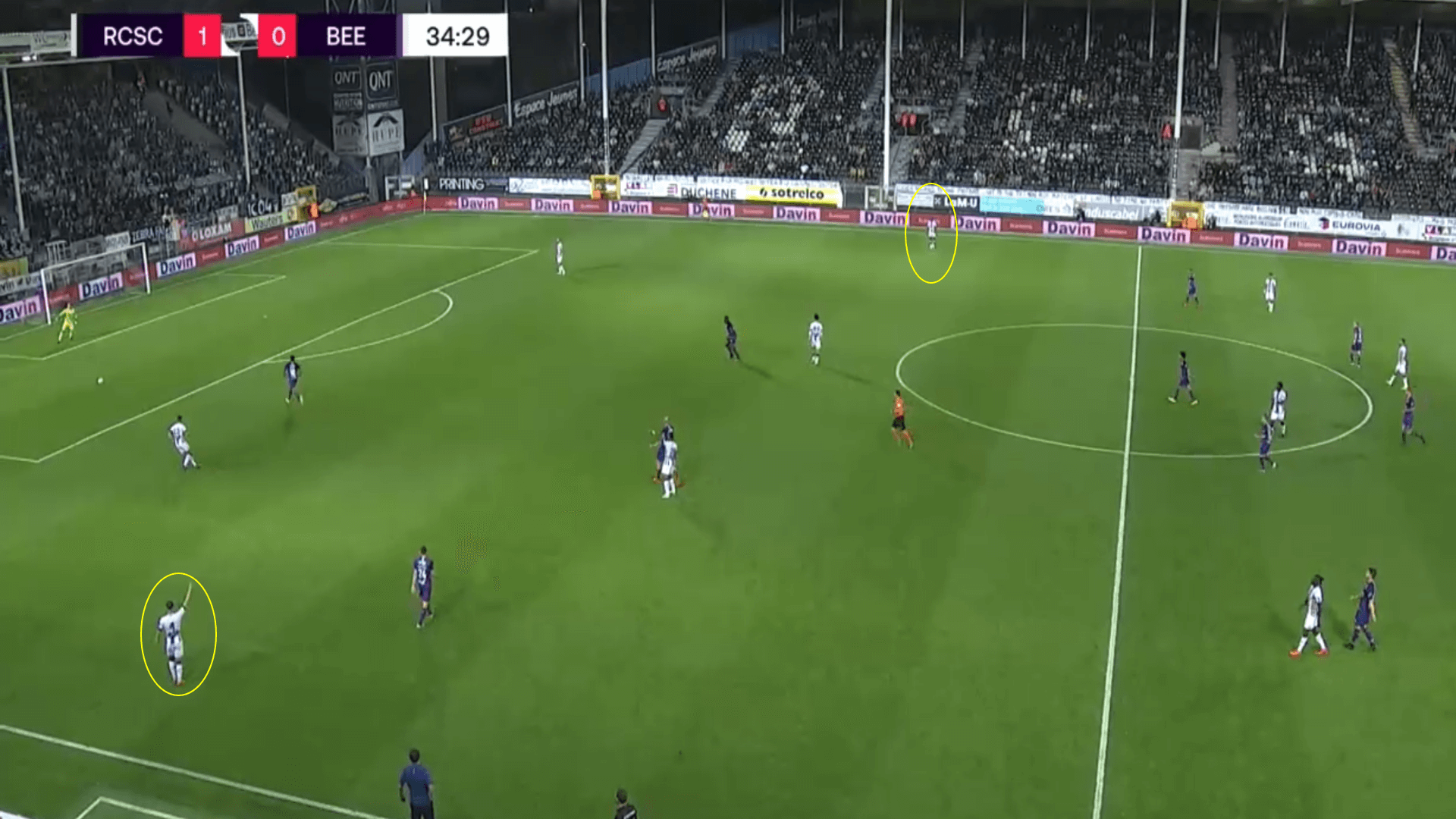 Furthermore, both wanted to overlap and thus overload the wide areas of Beerschot, putting real pressure on the defensive shape of the visitors to deal with them. Even when they were 2-0 up, we see below how Busi is pushing really far forward to put pressure on the Beerschot defence. He, probably marginally more than Kayembe, was aggressive in getting forward as often as possible. This may well have been another part of the tactical plan from the hosts to keep Holzhauser deeper, as, being the left-sided central player, it was part of his responsibility to help cover. 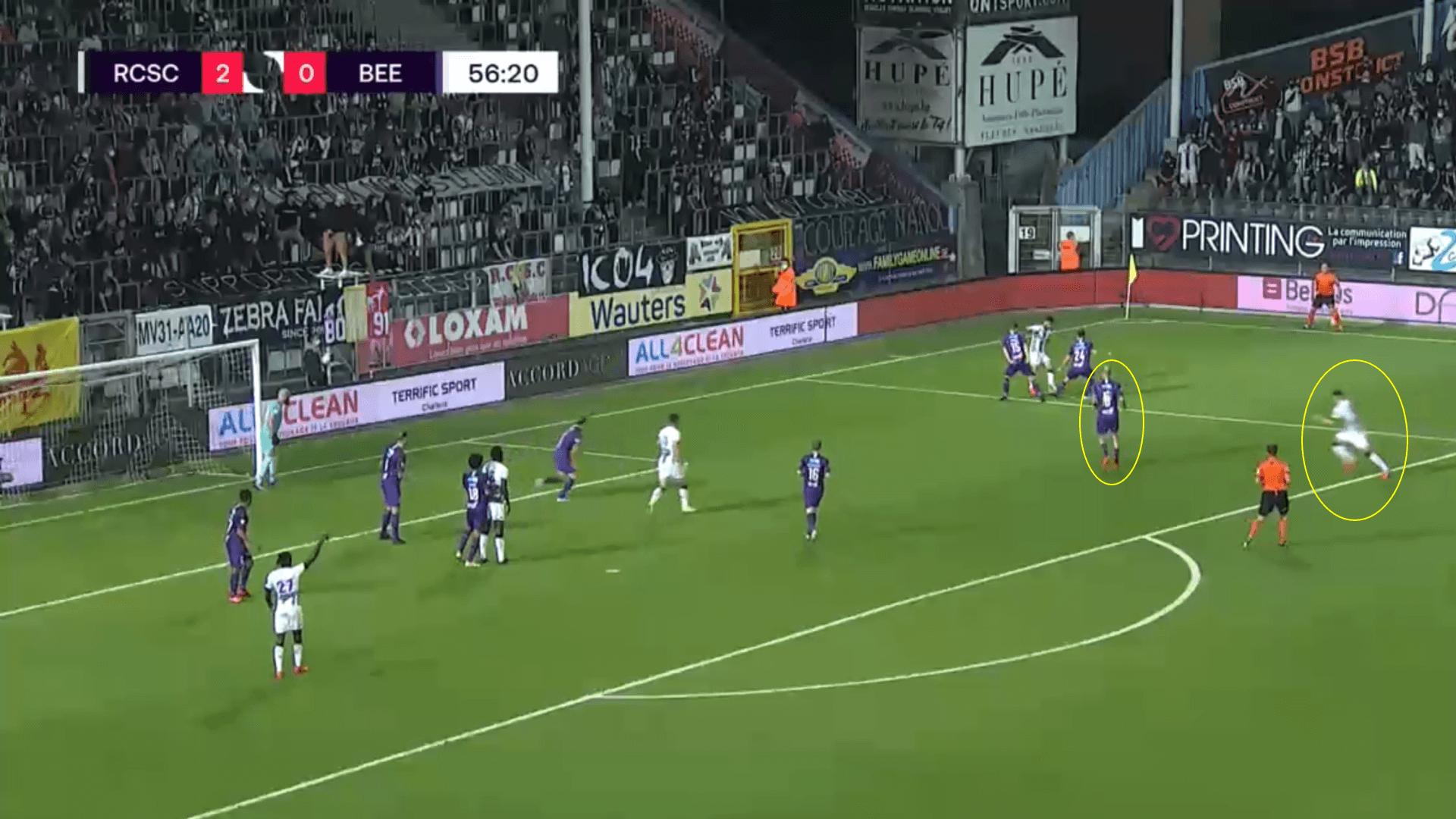 Busi put in the joint most crosses for Charleroi in the match, with three at a 67% accuracy rate. That the player sharing that with him was Gholizadeh, who also had three crosses, shows how both players were being used to overload on the right-hand side, considering the Iranian winger moved to that side halfway through the first half. Clearly, Charleroi wanted to take advantage of the formation match-up and be the aggressor in the game.

When we look at the left-hand side, we see that, while Kayembe did not cross as much as Busi, he attempted the most dribbles in the team with 10, of which five were successful. This is not surprising, when we consider Kayembe was seen as more of a winger than a full-back prior to the season, but Belocine has clearly been able to fit Kayembe into the system as an effective full-back, who can help at both ends of the pitch.

While both teams have had fantastic starts to the season, it was clear in this game that Charleroi were tactically set up to deal with Beerschot better than any other side has this season. By using their direct style of play, they were able to open up the space for their wingers to push on.

In addition, they pushed their full-backs forward, in order to create overloads on the wings and force Beerschot into committing more players to defending. One of these players was Holzhauser, who they managed to take out of the game by forcing him to have to come deep for the ball. Charleroi cemented their place at the top of the league, and look like they will be a difficult team to beat this season.