Sunday’s Belgian Pro League fixtures saw a goal fest as Sint-Truiden hosted Royal Antwerp in the second match of the day. Antwerp hired one-time Sint-Truiden and former Club Brugge manager Ivan Leko during the summer, hoping that he could bring the success he experienced with the Brugge side to Antwerp. While at Brugge, Leko won the league title and qualified for the UEFA Champions League while with the team.

Sint-Truiden also changed managers during the long off-season, bringing in former EFL player Kevin Muscat, whose last job had been with Melbourne Victory. Despite winning their opening game against Gent, Muscat’s side had failed to win in three matches. Similarly Antwerp, despite high pre-season expectations following their cup final win, had also only managed to win one of their games.

This tactical analysis will look at how both teams were able to create chances in an entertaining 3-2 win for Antwerp. The analysis will firstly focus on the pressing game of Sint-Truiden, before the use of wing-backs as playmakers for Antwerp. Finally, we will look at how the tactics of Antwerp changed after going a man down, and how they were still able to find the winning goal in spite of this. 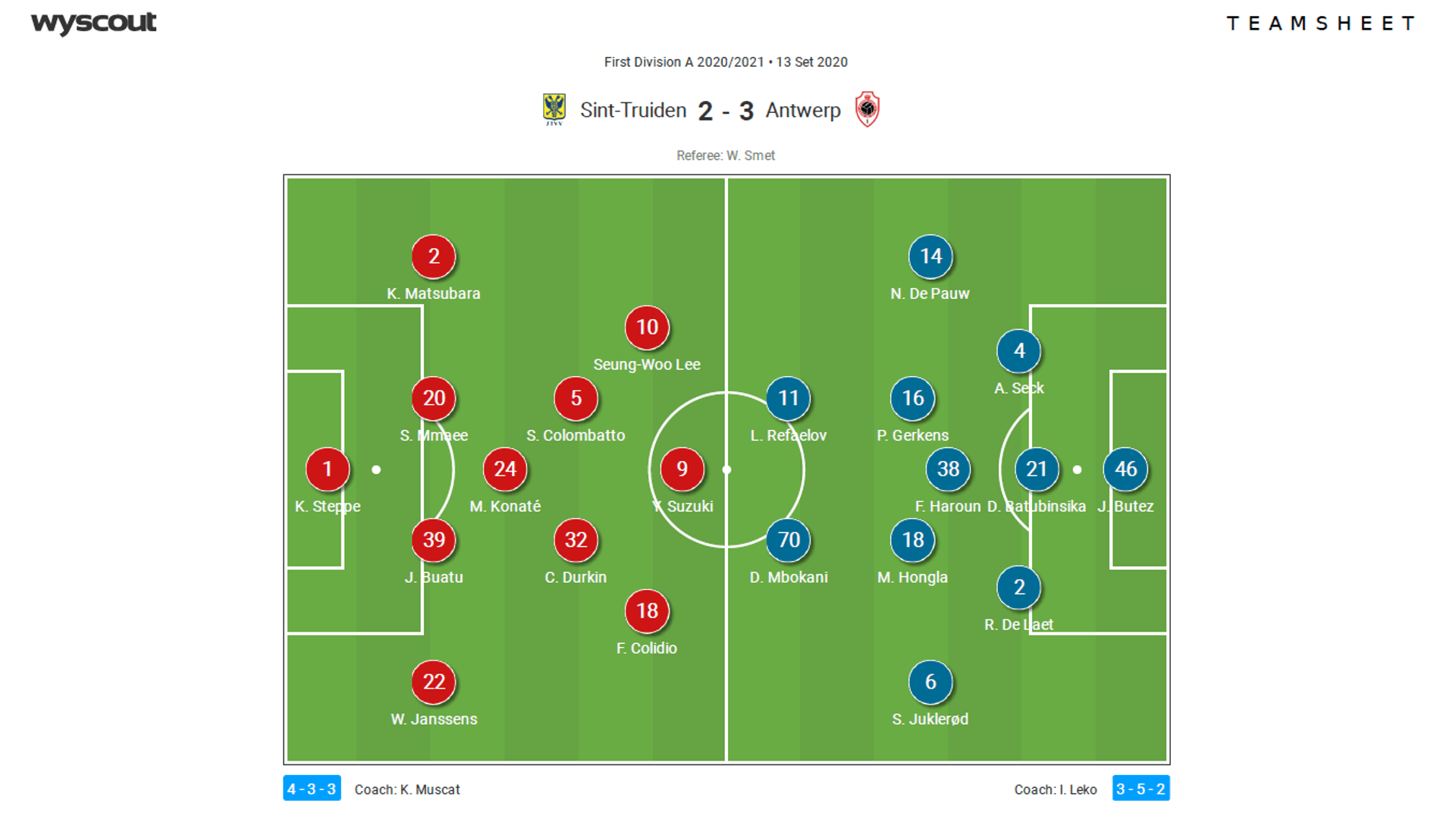 Muscat’s Sint-Truiden side was deployed in a 4-3-3 formation, with Kenny Steppe the man between the sticks. The back four was made up of Sammy Mmaee and Jonathan Buatu in the middle, while Ko Matsubara was at left-back and Wolke Janssens was at right-back. The midfield three was Mory Konate as the holding midfielder, with American Chris Durkin and Santiago Colombatto ahead of him. Yuma Suzuki was the striker, supported by Seung Woo-Lee on the left and Facundo Colidio on the right.

Leko went for a 3-5-2 formation, with Jean Butez in goal. The back three was made up of Ritchie De Laet, Abdoulaye Seck and Dylan Batubinsika. Giving them the width was Simen Juklerød on the left and Nil De Pauw on the right. Captain Faris Haroun was joined by Pieter Gerkens and Martin Hongla in the central midfield area, while experienced striker Dieumerci Mbokani was joined by the equally experienced Lior Refaelov upfront.

Sint-Truiden raced out of the blocks into an early lead, and, for periods of the first half, their pressing caught Antwerp napping. Muscat’s side has the energy and personnel required to play a pressing game, however, they certainly were not looking to press for the entire game. As we can see from the below graph, they gradually increased their press as the first half wore on, until taking the second lead, where they then began to get men behind the ball, looking to force Antwerp to play through them. 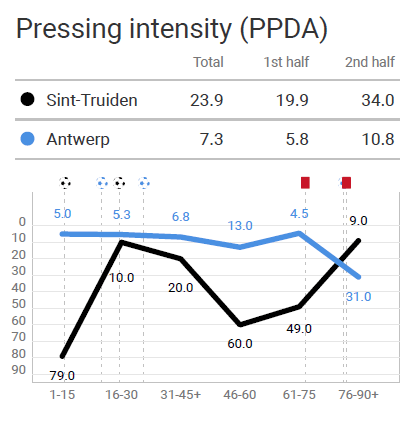 Where we see the peak on the above graph is during the time that the home side took the lead for the second time. It was the press that directly led to the goal. Perhaps it was because of Sint-Truiden only gradually increasing the press that Antwerp were caught out when the home side switched to a higher intensity pressing game.

Prior to the goal, we see how high Sint-Truiden are pressing. Two of the three central midfielders have been highlighted to show this. The front three wanted to sit on the back three of Antwerp for most of the game, either pressing them or trying to cut off passing angles by sitting deeper. We see below that the only option for the Antwerp player that is risk-free would be returning the ball to the keeper. 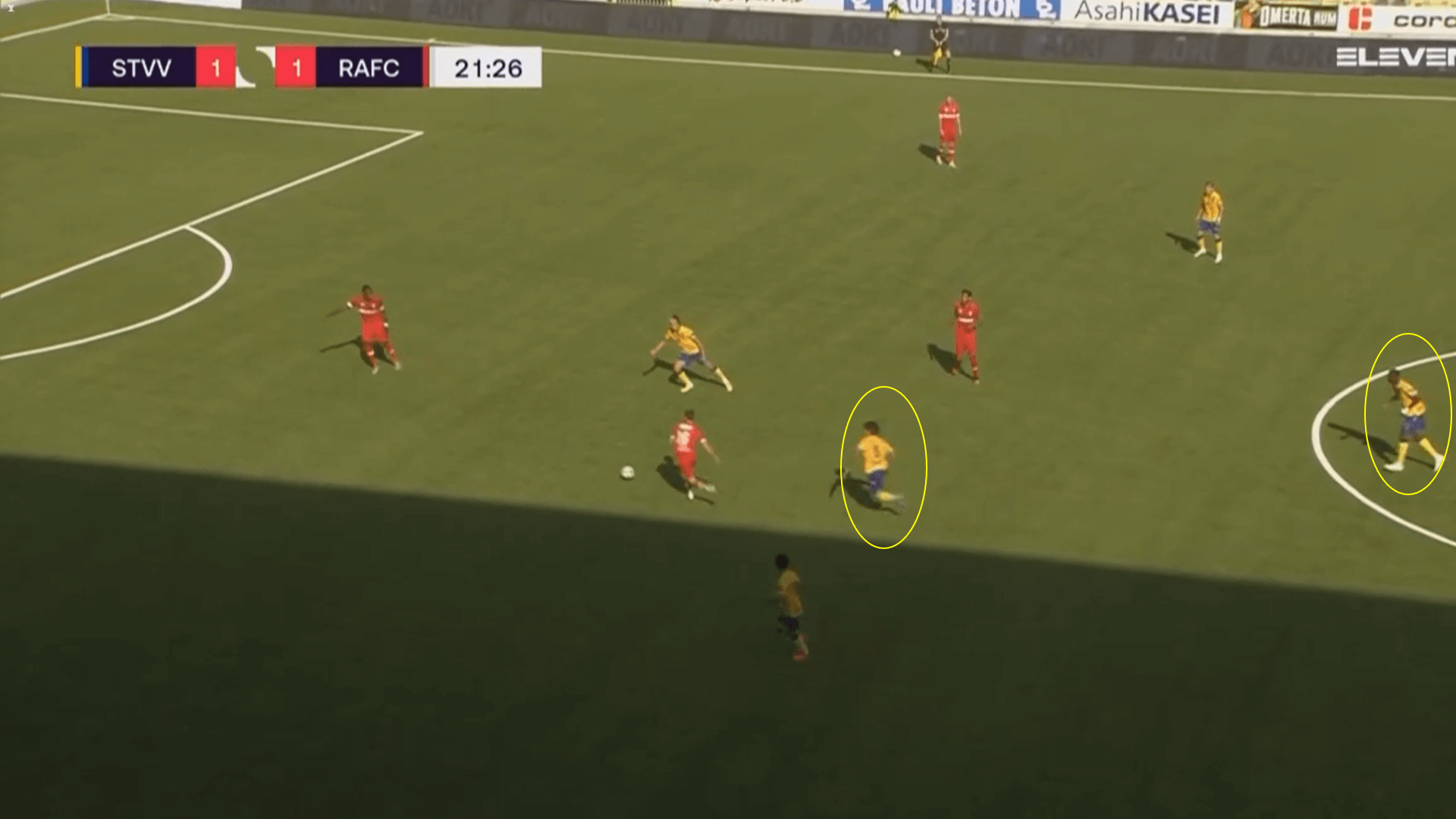 Just under a minute later, we see that Sint-Truiden have once again pressed Antwerp into going back to their keeper. The safest option for Antwerp would be to go more direct to Mbokani, however, it is clear that they wanted to play it out of from the back and keep possession. Sint-Truiden’s front three are once again covering the Antwerp back three, so the only option is Haroun who we see is coming deeper to receive the ball. 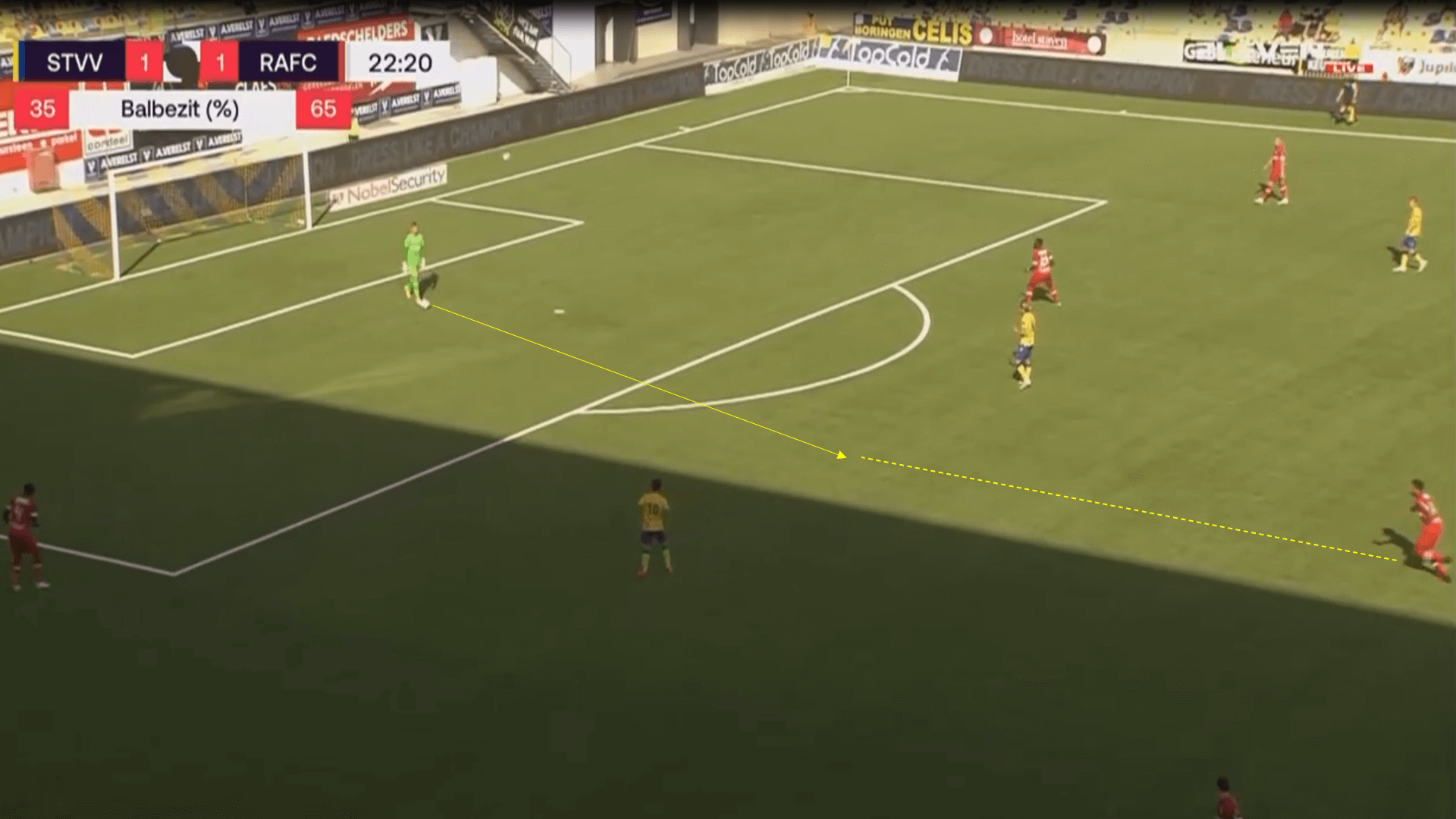 However, Haroun has next to no time to get the ball under control before Konate is on top of him and easily dispossesses him. This is an expertly timed run and tackle from Konate that clearly takes Antwerp’s captain by surprise. He is able to win the ball and find Woo-Lee who is able to put the home side back ahead. Having just applied a higher press minutes before, Antwerp will be disappointed that they didn’t react to the signs, playing straight into Sint-Truiden’s hand. Muscat will have been delighted that a slight tactical tweak resulted in a goal. 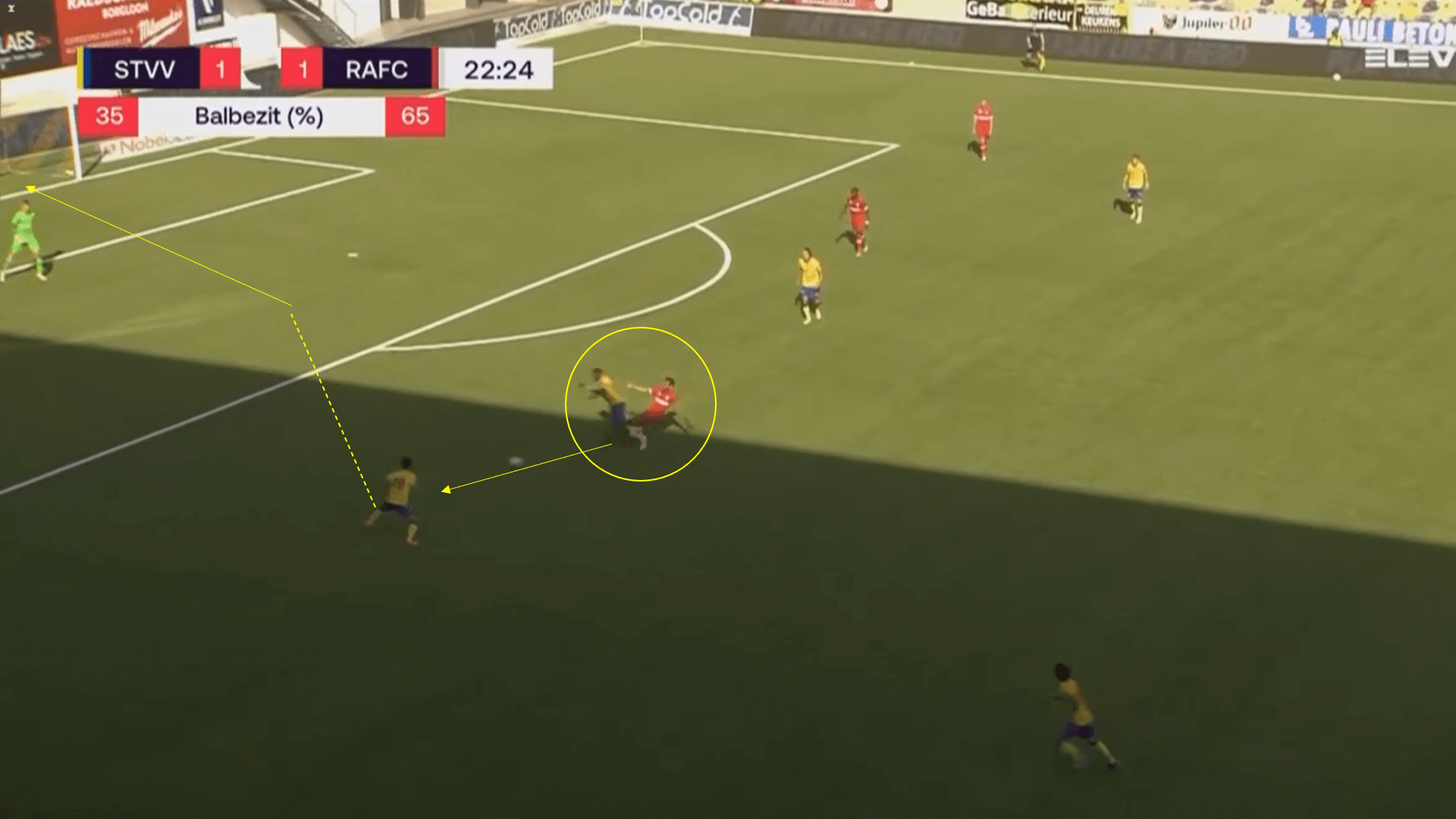 Antwerp, with their formation and tactics, were able to take advantage of the desire of Sint-Truiden’s players to remain high up the pitch, in order to exploit the space out wide. In the first half especially, there were plenty of chances for the away side to get the ball wide. Both De Pauw and Juklerød were encouraged to push forward in order to create width. The three up front for Sint-Truiden, while not always pressing, liked to split between the three Antwerp defenders and the wing-backs. This created a lot of space between the Sint-Truiden full-backs and their wide forwards for Antwerp’s wing-backs to exploit.

With a striker like Mbokani, the side were looking to get crosses in. Antwerp registered 28 crosses in the game, almost double that of their opponents. Between them, Juklerød and De Pauw combined for 17 of those crosses, which highlights the importance of their roles to the attacking tactics of Leko.

However, in order to get back on level terms initially, it was not from a cross that they scored; it was from getting their wing-backs to push up the pitch. Juklerød, highlighted here, is the deepest of the Antwerp attackers when they win the ball back in midfield. We see how Sint-Truiden are leaving themselves open to overloads on what, in basketball, we would term the weak side, being the side opposite to the ball. There is a potential three on two play on, because of the lack of defensive help the winger for the home side is giving, albeit because they have lost the ball while attacking. 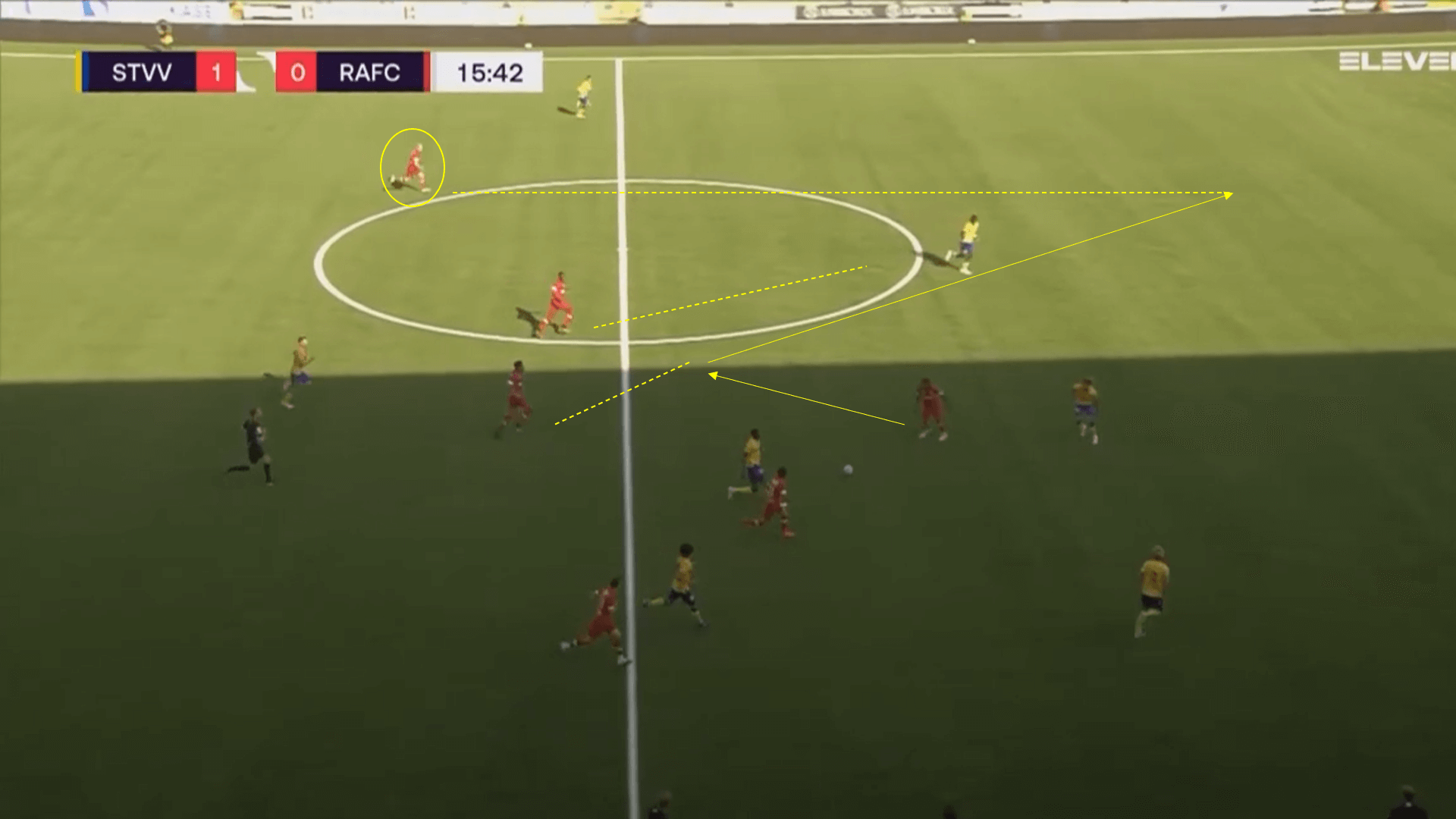 Excellent and accurate passing allows Antwerp to take advantage of this situation. Juklerød was impressive all game with his willingness to run and support both attacking and defensive phases. His speed allows him to get away from the defenders, expertly finishing into the bottom corner. This all came about because of Leko’s encouragement for his wing-backs to push high up the field. He wants them to be as much a part of the defence as the attack, which this goal highlights.

Throughout the game, if one wing-back is crossing, the other was supporting in the box. At the other end, you will also see them tucking in to support the three defenders. Juklerød looks like he fits into this system perfectly, and is certainly a player to watch this season.

Despite going down to 10 men in the 74th minute, Antwerp were still able to win the game thanks to a brilliant Juklerød free-kick. Throughout the game, prior to the sending off, Antwerp had dominated possession, having had 65% in the first half and registering 62% for the entire game. However, following the sending off of Batubinsika, they unsurprisingly began to let their opponents have more of the ball. Their average formation line dropped considerably from 56 to 49, while Sint-Truiden’s increased from 49 to 63 by the end of the game.

What made a difference for Antwerp was the introduction of Koji Miyoshi for Refaelov in the 63rd minute. Miyoshi provided a more direct running style compared to the Israeli playmaker, completing 100% of his three dribbles. Having gone down to 10 men, Antwerp switched to a back four, meaning that they were not going to push both wing-backs up, now using them as more traditional full-backs. This meant they needed a player like Miyoshi to transition the ball through his dribbling.

It was just this that created the free-kick which proved to be the winning goal. As we see from this throw-in, Louis Verstraete, who came on in place of De Pauw, is far deeper than the wing-backs had been. Prior to going down to 10 men, he would have been encouraged to push far higher up the field. 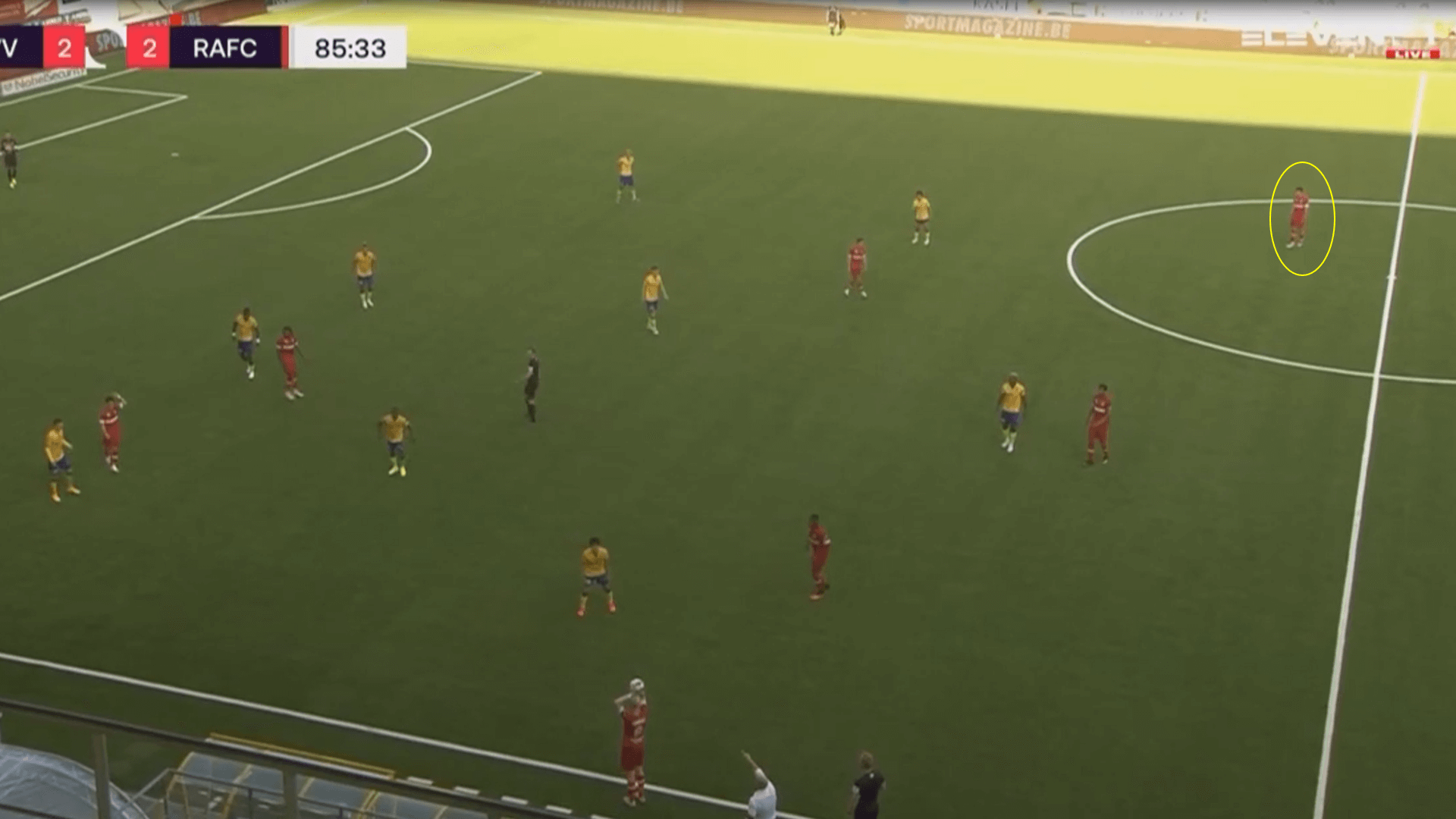 When Miyoshi finally receives the ball, we see that Verstraete has not moved forward, while the midfielders have also begun to sit deeper and more defensively. Miyoshi has no support ahead of him, but plenty of space into which he can run. Being a strong dribbler, he is able to transition Antwerp from the halfway line all the way up to the edge of the Sint-Truiden box, before eventually being fouled. 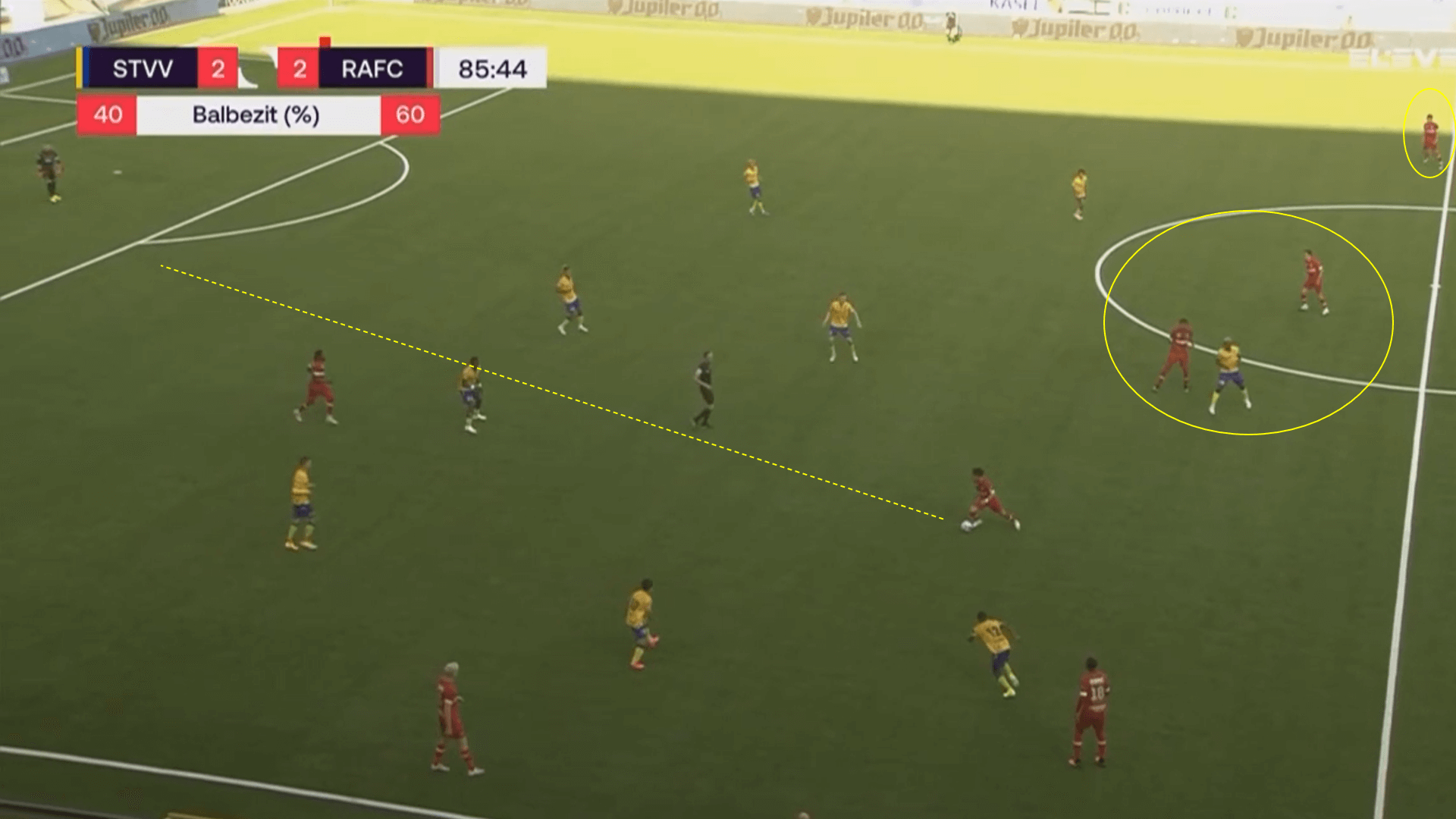 Again it is worth pointing out this change in tactics after going behind. When Miyoshi is fouled, we see only two other Antwerp players near the ball, whereas, prior to going down to 10 men, they would’ve had at least one more central midfielder joining the attack, as well as the wing-back. This should frustrate Muscat and his staff, as his side should have been able to nullify the attack of Antwerp in these situations. Instead, Leko bringing on Miyoshi ended up being the decisive factor in the game, as his ability to drive the ball forward allowed Antwerp to still create chances when being a man down. 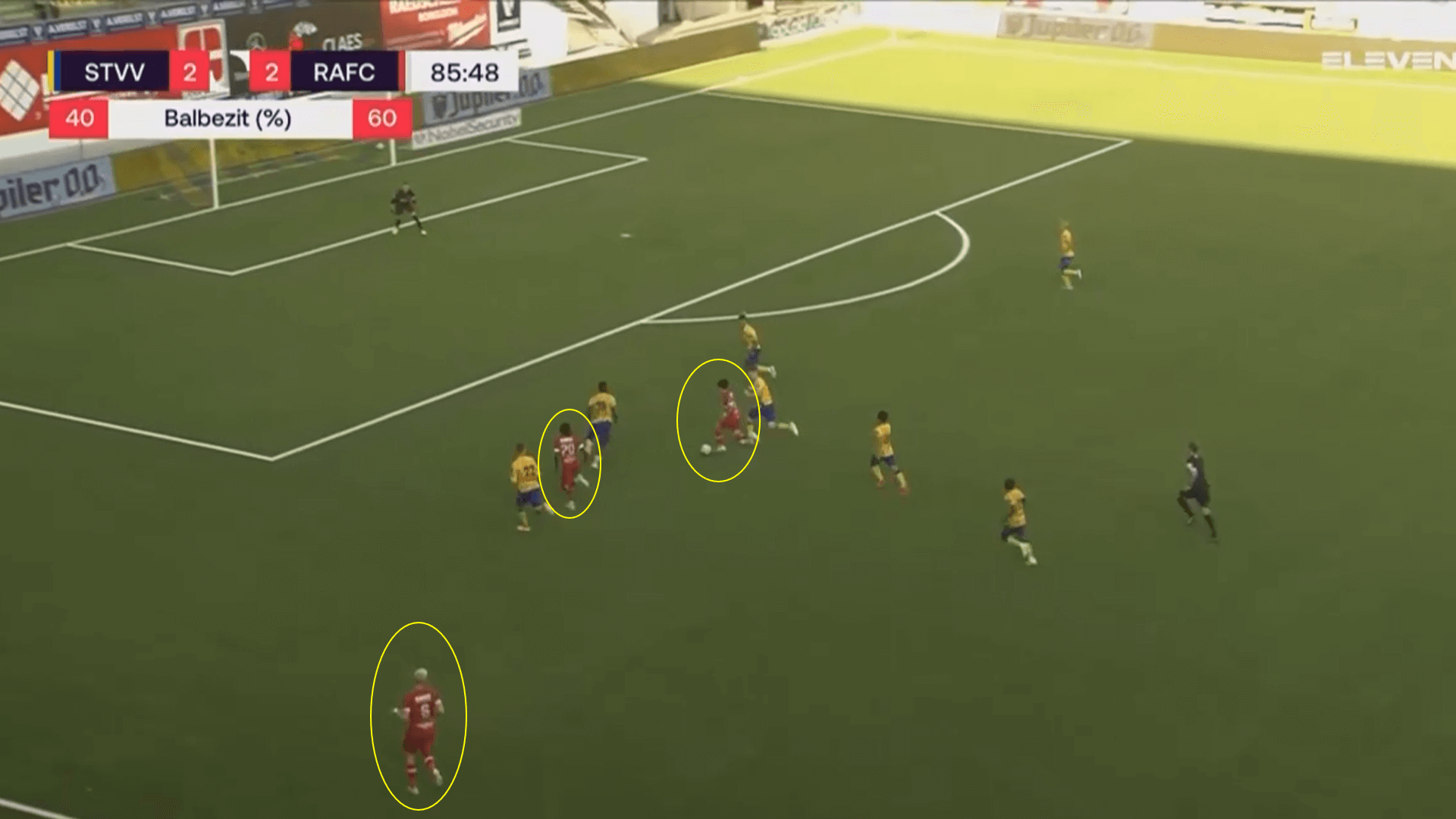 Antwerp will be delighted to have come away with the win, despite going behind twice. Last season they preferred to play teams on the counter-attack, rather than having possession, so going down to 10 men may have been less of a hindrance than it could’ve been, considering it forced them into playing the way they did last year.

For Sint-Truiden, having taken the lead twice, and then spending the last 15 minutes or so up against 10 men, Muscat will be really frustrated that they were unable to escape with at least a point. However, there were certainly plenty of positives for the manager to take away from the performance; one, in particular, being that his side certainly have a plan for future games which can disrupt and upset the bigger teams in the league.

The marquee match of the group stage featured a rematch of the 2016 Euro championship game, Portugal vs France, the […]

Brazil always faced Peru in these years, they beat them in the final to win the competition in 2019, while […]