Real Madrid sealed the La Liga title with victory over Villarreal on matchday 37. It was the win that Real Madrid were after, beating Barcelona to the crown, even though a draw or even a defeat would have sufficed as Quique Setién’s team suffered defeat to Osasuna.

Karim Benzema was on the scoresheet with two goals, one from the penalty spot after a disastrous attempt at a routine with Sergio Ramos, before Vicente Iborra pulled one back as a consolation strike late on in the game.

This tactical analysis will provide analysis of the tactics of Real Madrid and Villarreal as Zinedine Zidane led his team to lift the LaLiga title for the first time since 2017 with a resounding win at the Estadio Alfredo Di Stéfano. 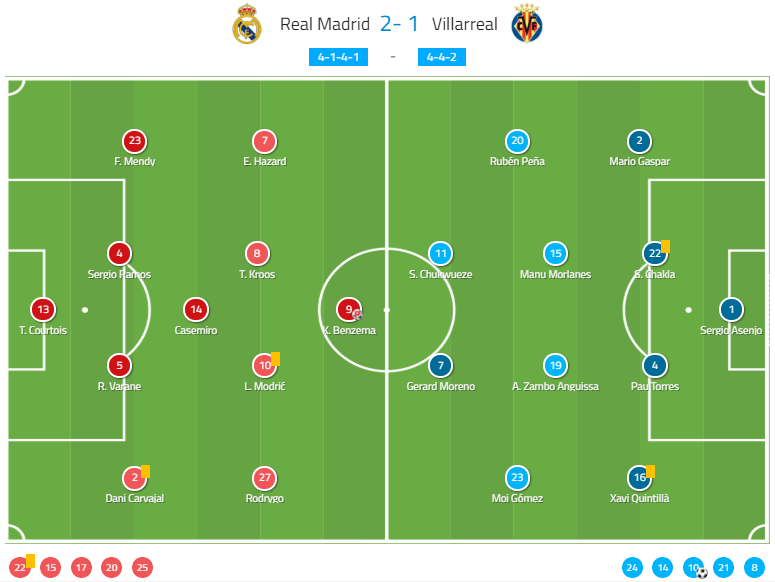 Real Madrid selected one of their strongest possible line-ups, with the only surprises coming in attack. Zidane opted for Rodrygo on the right of attack, despite speculation that Vinícius would start the tie. Eden Hazard returned on the left while Fede Valverde was left on the bench.

Javi Calleja, on the other hand, did make some rotations. Santi Cazorla and Paco Alcácer both dropped to the bench, with Samuel Chukwueze moving in to attack to add more defensively sound wide options in Moi Gómez and Rubén Peña. In defence, Raúl Albiol was also rested with Sofian Chakla coming in to the line-up.

One of the key focuses for Real Madrid in this encounter was their desire to stretch play and create spaces in the Villarreal defence. By using their wide players with great width, stretching out to the touchlines on both flanks, Real Madrid were able to create greater spaces and channeled their focus in wide areas. In total, 70% of their attacks came through wide channels, though it must be recognised that Villarreal defended this well. Despite having the success of focusing on the flanks, Real Madrid’s wide attacks, counting for 70%, contributed only 42% of xG with 0.38xG from 0.98xG with both goals coming through central channels exploiting spaces in the middle as play cut inside from wide areas.

As can be seen in this example, the key role was played by Toni Kroos and Luka Modrić. The two midfielders operated as playmakers looking to shift the ball diagonally into space on the flanks. Many of their passes were diagonal shifts into the wide areas, usually into the path of the full-back moving forwards or to set up the winger to play in the over or underlapping full-back. This allowed Real Madrid to quickly attack any spaces that did open up in wide areas, with their pace being key against the likes of Mario Gaspar who struggled to keep up at times.

This was aided by the role of the full-backs. On the left, Hazard would move inside, allowing Ferland Mendy to overlap on the left, while Rodrygo would stick to the touchline on the right with Carvajal underlapping. In both cases, the defenders added an additional attacking option in a wide position while adapting to the forward ahead of them. As the wingers swapped, the full-backs would vary their movement, with Mendy in particular linking up well and allowing Hazard to drift inside without compromising the team defensively.

While the hero of the day was Benzema with two goals, his non-penalty xG was just 0.33 xG as the Frenchman struggled to find spaces in central areas or to escape a marker and get on the end of Real Madrid’s crosses, with only 11 recorded with almost half coming in the first half an hour before changing approach as Benzema was evidently unable to find the space required in these central areas with the two organised blocks in defence and midfield. That denied him the chance to drop deep, and crosses could not pick him out, leaving him searching for an alternative.

As is evident in the above image, Villarreal were effective in shutting off central opportunities when Real Madrid were not stretching the game. With a narrow defensive line and protection from Andre Zambo Anguissa and Manu Morlanes, Benzema found it hard to find space in between the central defenders and the full-backs. This is why Benzema would pull off into wider areas in search of more space. This would regularly see him drift towards the left as Hazard would be more likely to cut inside with his run than Rodrygo, allowing Benzema to pull behind the full-back on occasions.

In doing so, Benzema created greater space for himself and would often be picked out by midfielders, in this case Casemiro. However, by being in such a wide area at a narrow angle, many of his opportunities from open play were low xG chances which he could not convert. In fact, he only had one effort worth more than 0.25 xG, his first goal which came from a defensive error, with one other central chance but the majority of his attempts on goal came from wide areas. As such, Villarreal can be happy with how they nulllified Benzema in his usual role in central area, despite the two goals conceded.

Since the restart in LaLiga, Villarreal have been surprisingly impressive with their pressing game in which they have pressed high with great intensity. In recent weeks, they have become to be a little sloppy, overloading certain areas and tiring late on in games, no longer able to press in the same way. Real Madrid were clearly keen to counter this and looked to activate their own pressing strategy whilst resisting the Villarreal press, although there was an interesting change in how Calleja’s team pressed.

Most recently, Villarreal have overloaded specific areas in the opposition half in order to press, but against Real Madrid this was not the case. Instead, they formed a rigid structure, with their blocks of four defenders, four midfielders and two forwards. However, they pressed high as a unit, not allowing Real Madrid to pass the ball around the backline, rather looking to push them back inside their own half with an organised press with Chukwueze moving up the field and being followed by supporting midfielders. The result was that an impressive 27.8% of interceptions and recoveries came in the opposite half.

Real Madrid instead did take more of an overload approach, pressing high up the field led by the front three with support from the full-backs and midfield. As can be seen here, the press was deployed even up to the touchline with each Villarreal man being pressed to close down passing channels. When compared, Real Madrid managed just 21.4% of interceptions in the Villarreal half, but this was primarily due to the relaxation in the press after Real Madrid took the lead. Before Benzema’s goal, 42.3% came in the opposition half. It was in fact through such a recovery, capitalising on a poor defensive error from Villarreal under pressure, that led to the first Real Madrid goal.

There was also an intriguing tactical switch in Villarreal’s attacking play. With Cazorla rested, the team was lacking their usual attacking midfielder and had instead opted for more defensively reliable options in the middle of the park. This left a big gap in their offensive approach and it was one which was surprisingly taken up by Gerard Moreno. The centre-forward dropped into a deeper role with a new partner as Chukwueze joined him as Alcácer was rested. This new look duo took an entirely new approach.

Moreno would drop into the gap between defence and midfield to operate in Cazorla’s pocket of space, marked in red below, while Chukwueze would use his pace to run at the defence at pace in behind and look to stretch the central defenders. The forward made two progressive runs through this approach, while Moreno would hold off and then run into the box at the far post late on if the ball continued to progress.

However, it did make Moreno less effective, registering the first game in which he did not shoot nor provide a shot assist since April 2019. While he was positionally strong, Casemiro marked him well and prevented the ball from getting to him to operate as a playmaker. Instead, it meant that Moreno was lost from the front line and could not operate as a poacher in the box and this greatly limited Villarreal’s conversion abilities once in the final third as Chukwueze lacked that cutting edge.

This game was the perfect example of Real Madrid’s season of getting the job done and doing enough to win comfortably, without ever looking spectacular in their play. Villarreal defended in a structured way with great discipline which prevented Real Madrid from generating many chances, relying on a defensive error for the first goal and a controversial penalty for the second. Sealing the title in the penultimate game, the result should set Real Madrid up well for their campaign in the Champions League by resting key figures against Leganés in the final fixture while hoping to have an easier opponent to create space in the final third.