Borussia Mönchengladbach were one of the most exciting sides throughout the 2019/20 season. Marco Rose’s side finished the season in fourth place, making UEFA Champions League qualification for the first time since 2015/16 alongside RB Leipzig, Borussia Dortmund and the champions, Bayern Munich.

While Lars Stindl was still recovering from a tibia fracture at the beginning of the season, his involvement in the second half of the season was crucial and he was one of Gladbach’s most important men going forward.

This tactical analysis will be in the form of a scout report and will be looking into the strengths and weaknesses of the 31-year-old and how he fits in at Gladbach.

Stindl plays his football in the centre, either as a striker, or playing just behind as a #10/shadow striker. One of his main responsibilities when playing is to find spaces between the opposition’s lines. This allows quick verticle transition and also, Stidl’s low centre of gravity allows him to turn quickly when receiving in spaces and he can then drive forward or pass. 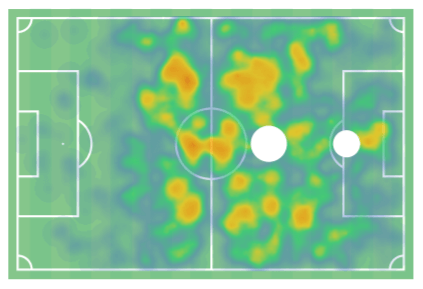 From his heatmap, which is shown above, we can see that Stindl moves across the frontline and drops into different areas around the pitch. This allows Gladbach to move the ball vertically quickly, which is one of Rose’s clear tactics. 33.5% of Gladbach’s passes are forward ones; they often look to bait a team into a press and then quickly transition forward. 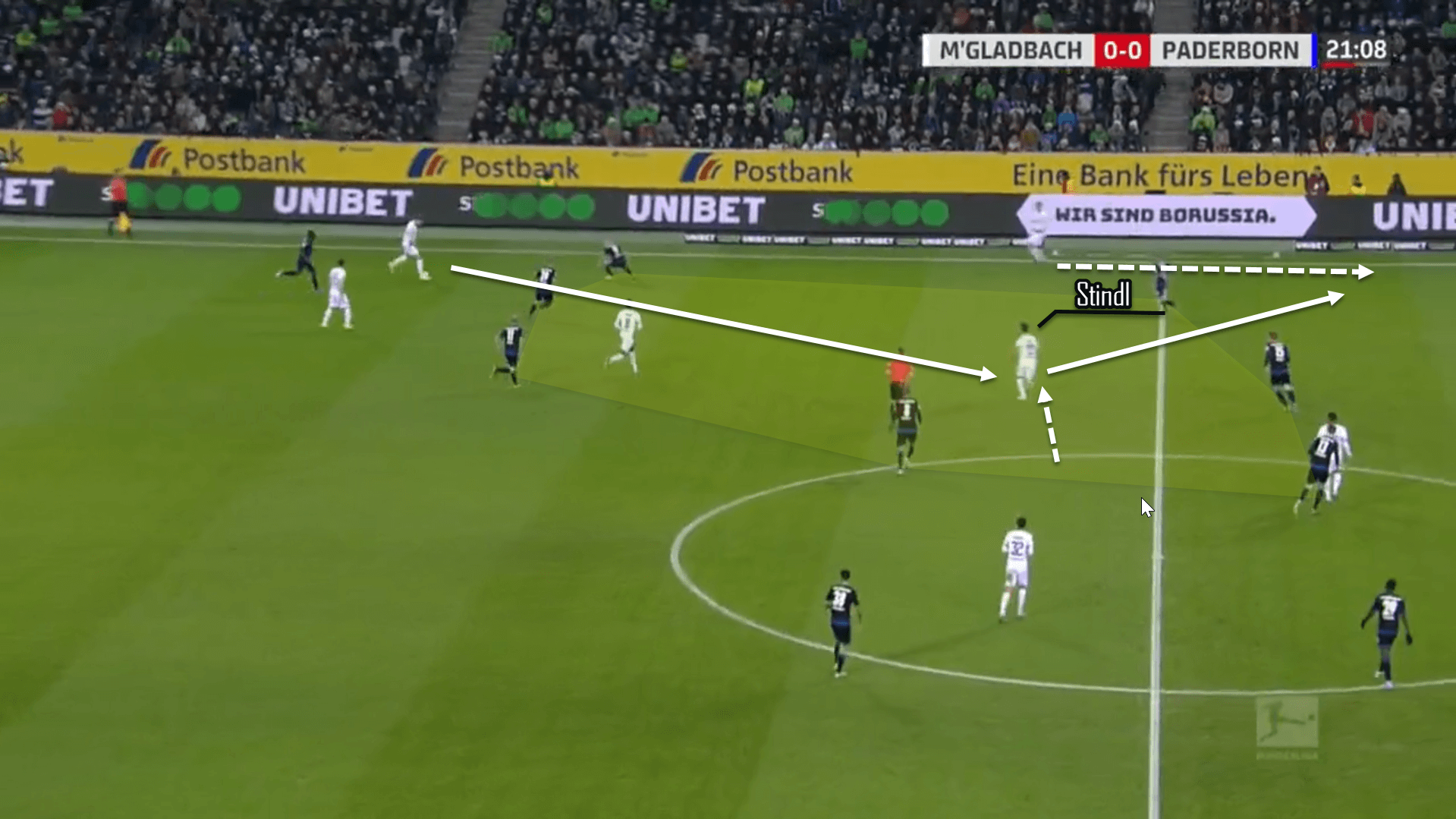 In the image above we can see how Stindl looks to find space between the lines of the opposition. He moves from a central area into the left half-space, where he becomes a progressive option for his full-back on the ball. He receives the ball in this position and then plays a first-time pass behind the opposition’s backline to his teammate; showing good awareness too. Stindl is always looking to get into positions for the ball to be played into him, he receives an average of 31.76 passes per 90.

Stindl also looks for spaces in the final third, which helps him get in positions for a final pass or shot. 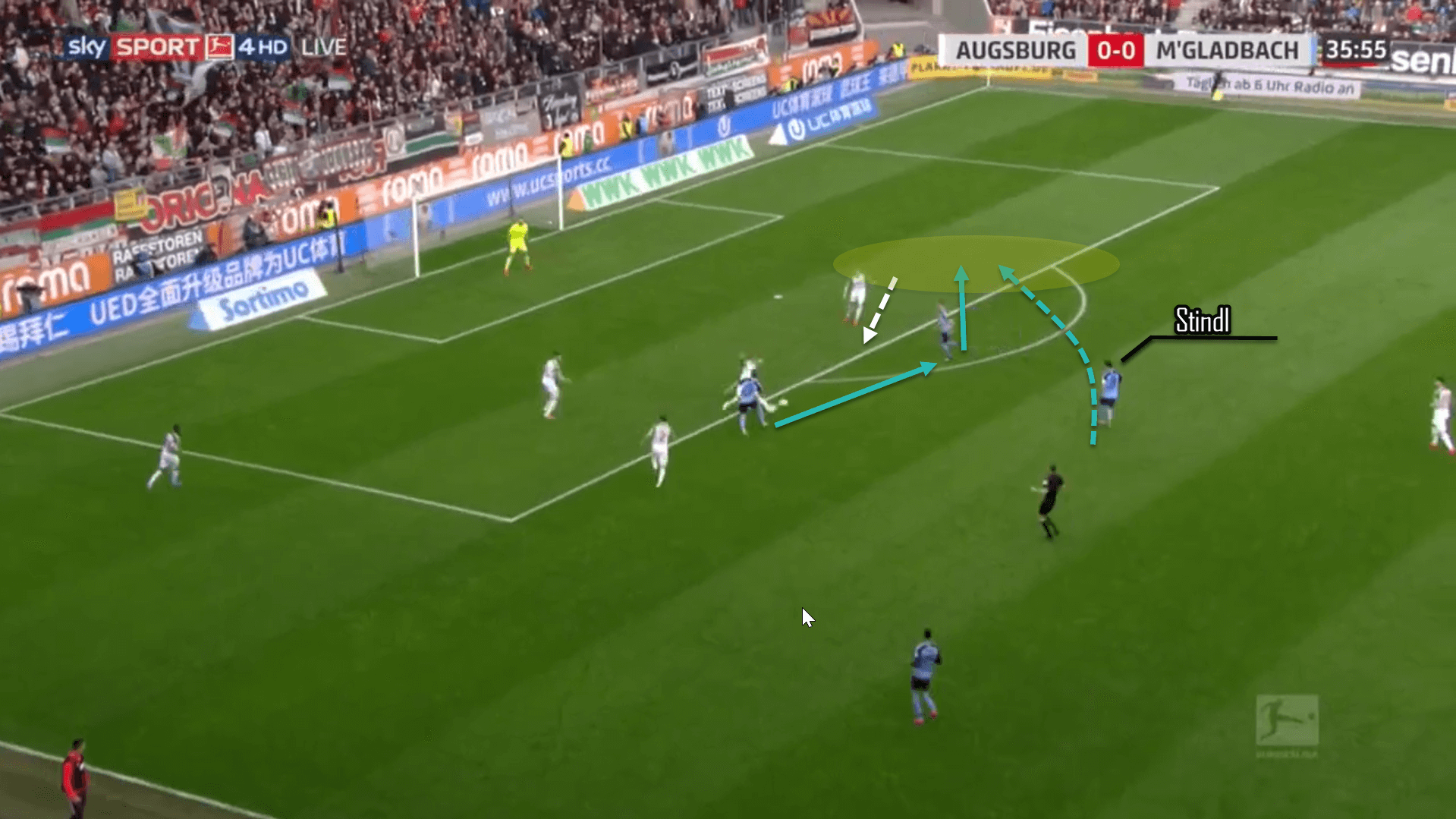 This image shows an example of this, where Stindl notices the space being created at the back post, with the opposition left-back moving inside. Stindl recognises this space and moves towards the back post. After Jonas Hofmann moves the ball to Florian Neuhaus, who can then release the ball to Stindl in the space. This allows him to then get a shot on goal, which he does, but the goalkeeper saves well. However, Stindl’s movement to find the space to shoot is positive and partly reasoning for the fact that his xG/shot is at an impressive 0.23 and that he has 0.53 goals per 90.

Stindl’s movement is a great asset to the side and can also be beneficial off-the-ball movement, which helps create space for his teammates. 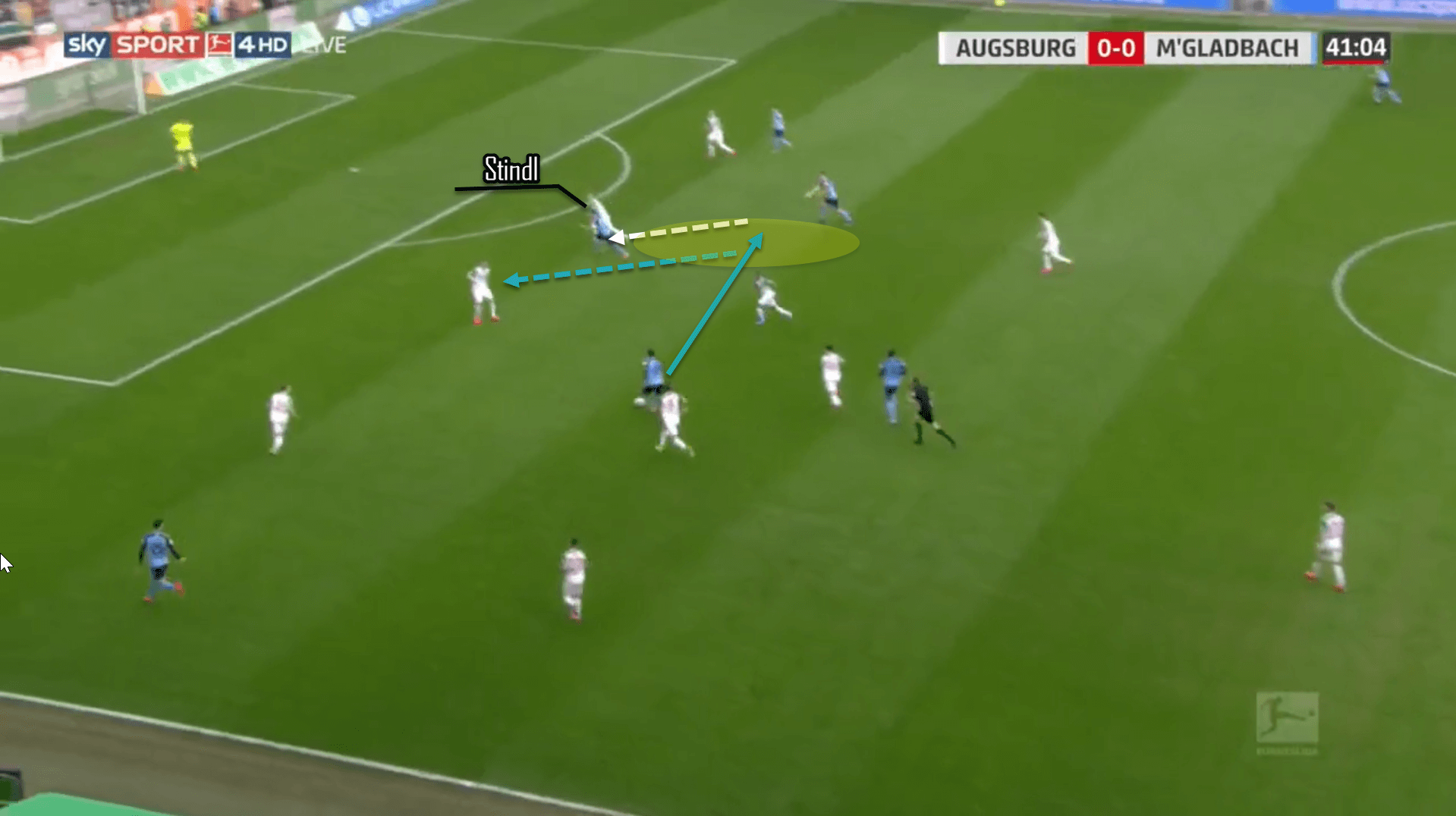 Stindl’s off-the-ball movement to help create space for his teammates is shown in the image above. His diagonal run in the final third helps drag the opposition left centre-back across with him. This then creates a passing lane into Neuhaus, who is making a run towards the edge of the box. His shot is saved by the goalkeeper, but the movement from Stindl to create the chance for his teammate was impressive.

While his movement between the lines is impressive, Stindl’s ability to then find his teammates with a first-time pass shows his great awareness of his teammates positioning. This allows him to play at a high tempo and stay one step ahead of his opponents at times.

In the images above, we can see that Stindl firstly receives the ball in a space between the opposition lines. Just before he receives the ball, the 31-year-old checks his shoulder, he does this to see where his teammates are positioned. He then receives the ball, turns quickly and plays the ball wide to Alassane Plea, who crosses to Marcus Thuram and the Frenchman scores. Stindl is only able to play forward to Plea as he did due to his impressive awareness.

Shown above is another example of the awareness that Stindl possesses. After he sees Patrick Herrmann pressing the opposition full-back and winning the ball, Stindl checks his shoulder immediately and the receives the ball. He then knows that he has Plea running into the area with him with just one centre-back covering them both. When the defender moves across, Stindl knows that his teammate will be free to receive the ball, he plays the ball to Plea and the Frenchman scores. Stindl’s awareness to play the ball across to his open teammate is impressive and helps him get an assist.

Stindl’s awareness allows him to see the picture before he receives possession. He is more likely to play forward passes due to this, as he knows the position of his teammates when he’s looking to receive possession. Stindl averages 8.67 forward passes per 90, considering he is usually one of the furthest forward players, this shows his awareness is good and he notices when his teammates are making good runs forward. 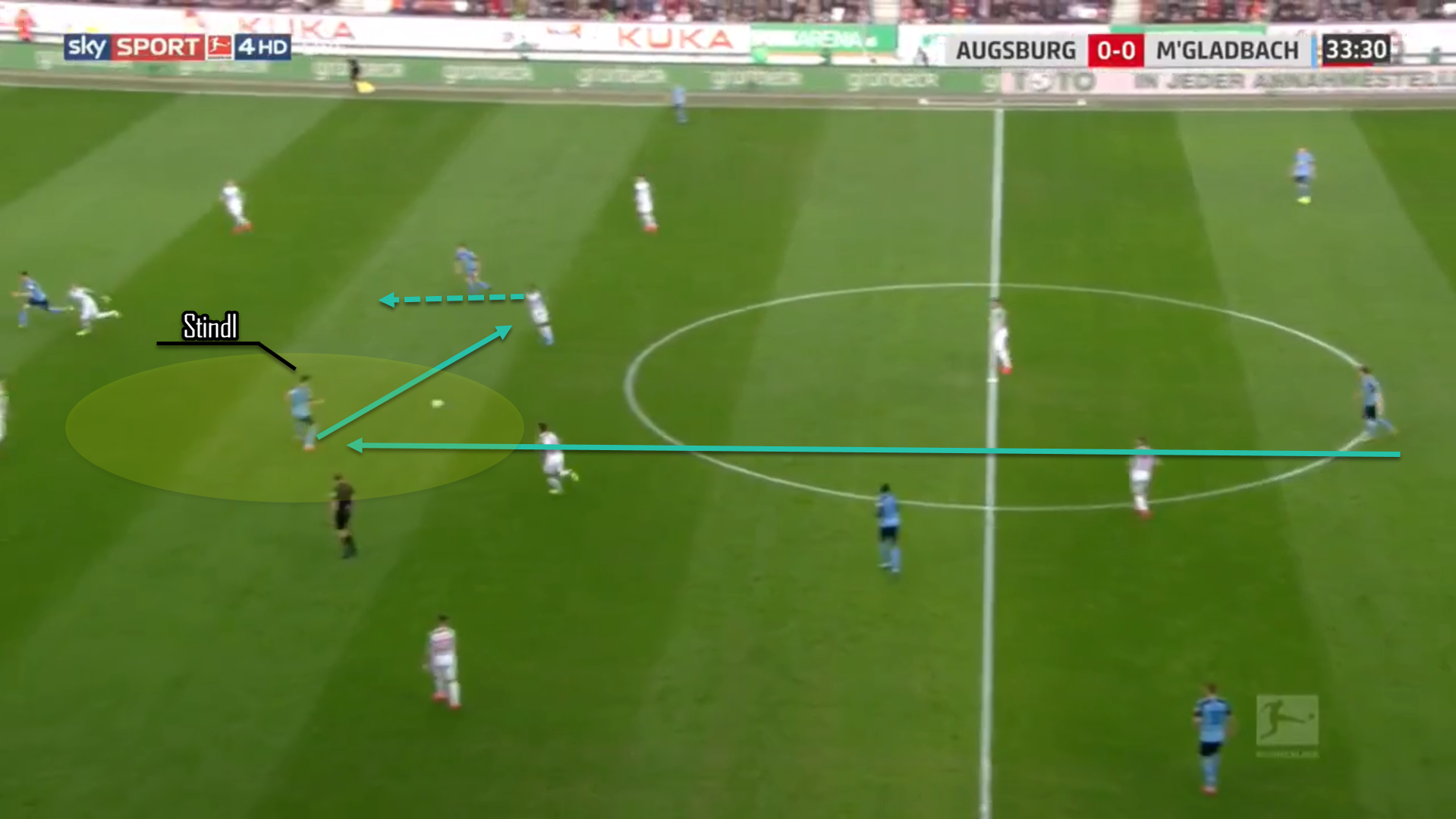 Sometimes Stindl finds himself in a good position and knows where he wants to pass but cannot find the pass as he looks to play too quickly. This is shown in the image above, where a brilliant ball from deep is played into Stindl, he sees that he can play the ball quickly to Neuhaus. However, with the speed of the ball played into him, Stindl should look to control the ball and then play a more precise pass. Instead, he looks to find his teammate first-time and it is unsuccessful. Perhaps more calmness when receiving the ball could lead to better ball retention and chance creation from the player.

With Stindl liking to find positions between the lines of the opposition, he also needs to have good creativity levels to take advantage of the spaces that he finds and he does this well. He produces 3.77 OP shot-creating actions per 90 throughout the 2019/20 Bundesliga season.

While he has good creativity levels, Stindl also is good at retention, with an 84.58% pass completion rate. This shows that he usually knows when to be creative and also his high success rate of finding his teammates. 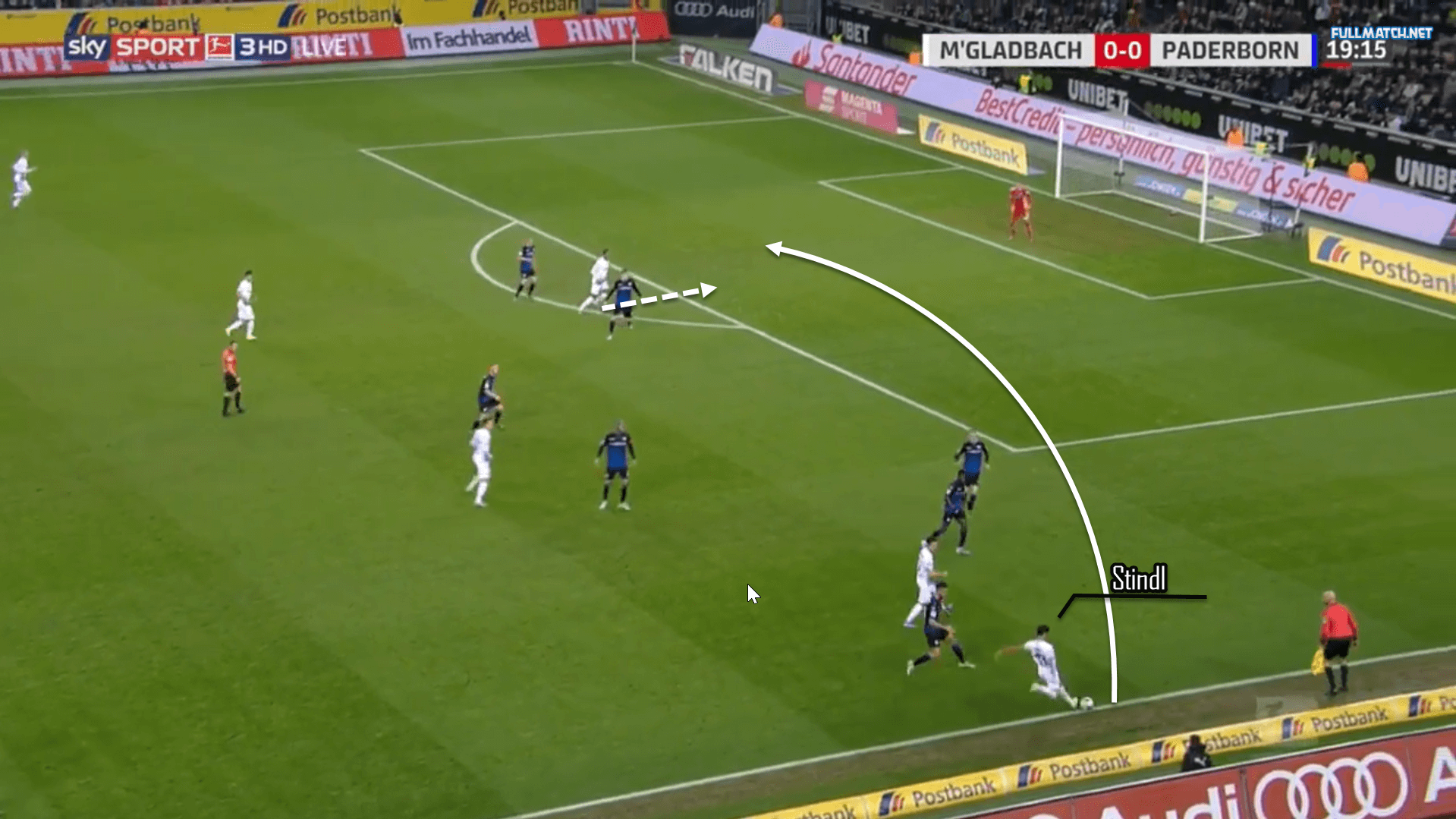 In the image above you can see Stindl receiving the ball in a wide area after holding up the ball well firstly. He is then able to play a deep, curling cross behind the defensive line into Plea. His ability to see his teammates run is good but the execution of the cross is even better and the striker is unlucky to hit the post with his header. Stindl might not get into wide areas very often, but his crossing accuracy of 31.25% is impressive and shows his creative qualities. 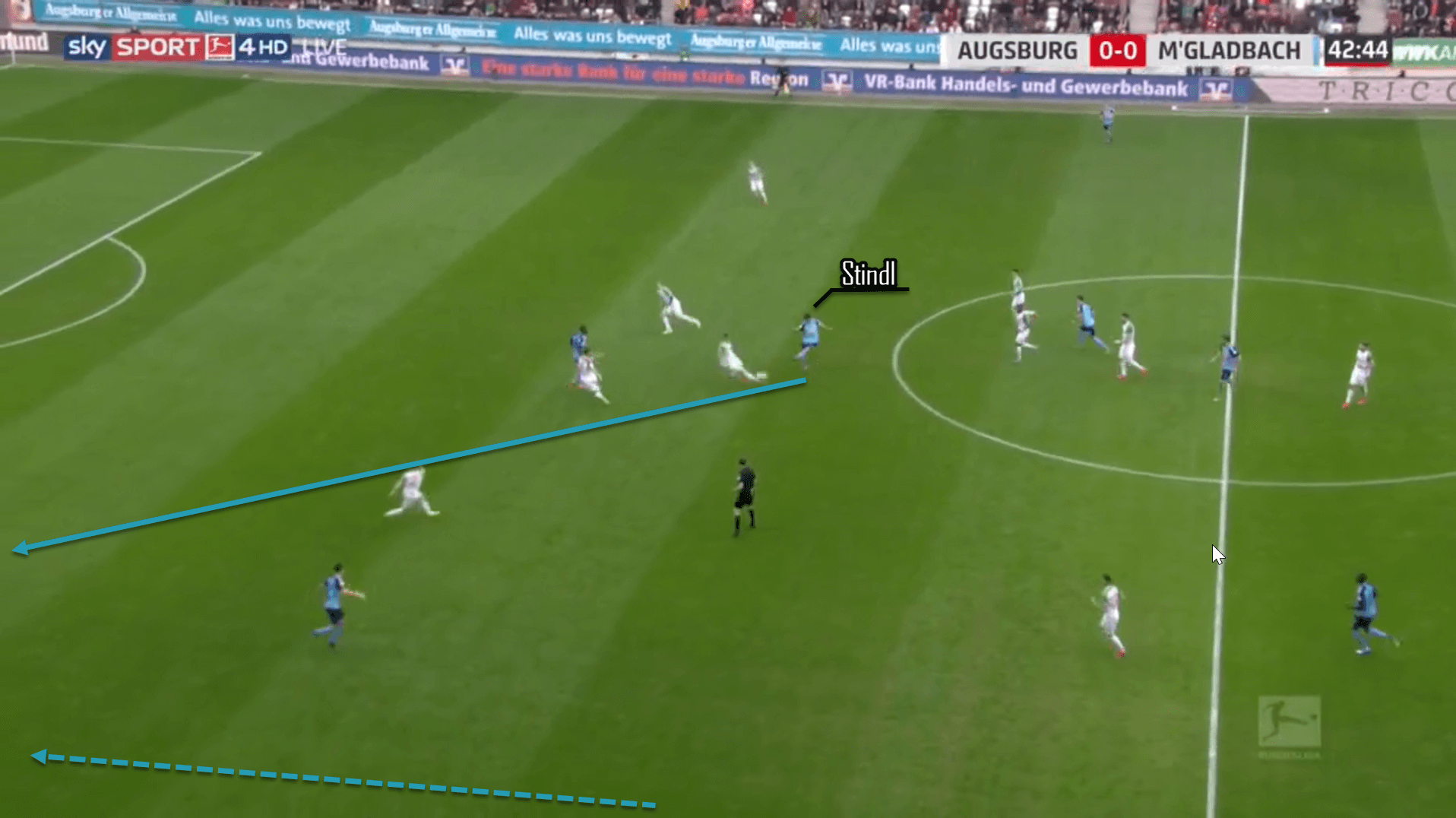 This time, in the image above, we see Stindl in a more familiar position centrally. After receiving a pass between the lines of the opposition, he plays a brilliant ball out wide and behind the opposition defensive line towards Ramy Bensebaini, who is just off-screen, making a forward run. Stindl’s ability to see the run but also play the pass are both impressive and Gladbach are then able to get a dangerous cross into the area. Stindl averages 1.48 through passes per 90, showing his preference to find a pass beyond the defensive line.

The Gladbach player also is able to evade pressure through his creative ability, this is brilliant to have in a league where the pressing intensity is so high; the Bundesliga’s PPDA averages at 10.96 across all of the clubs in 2019/20. 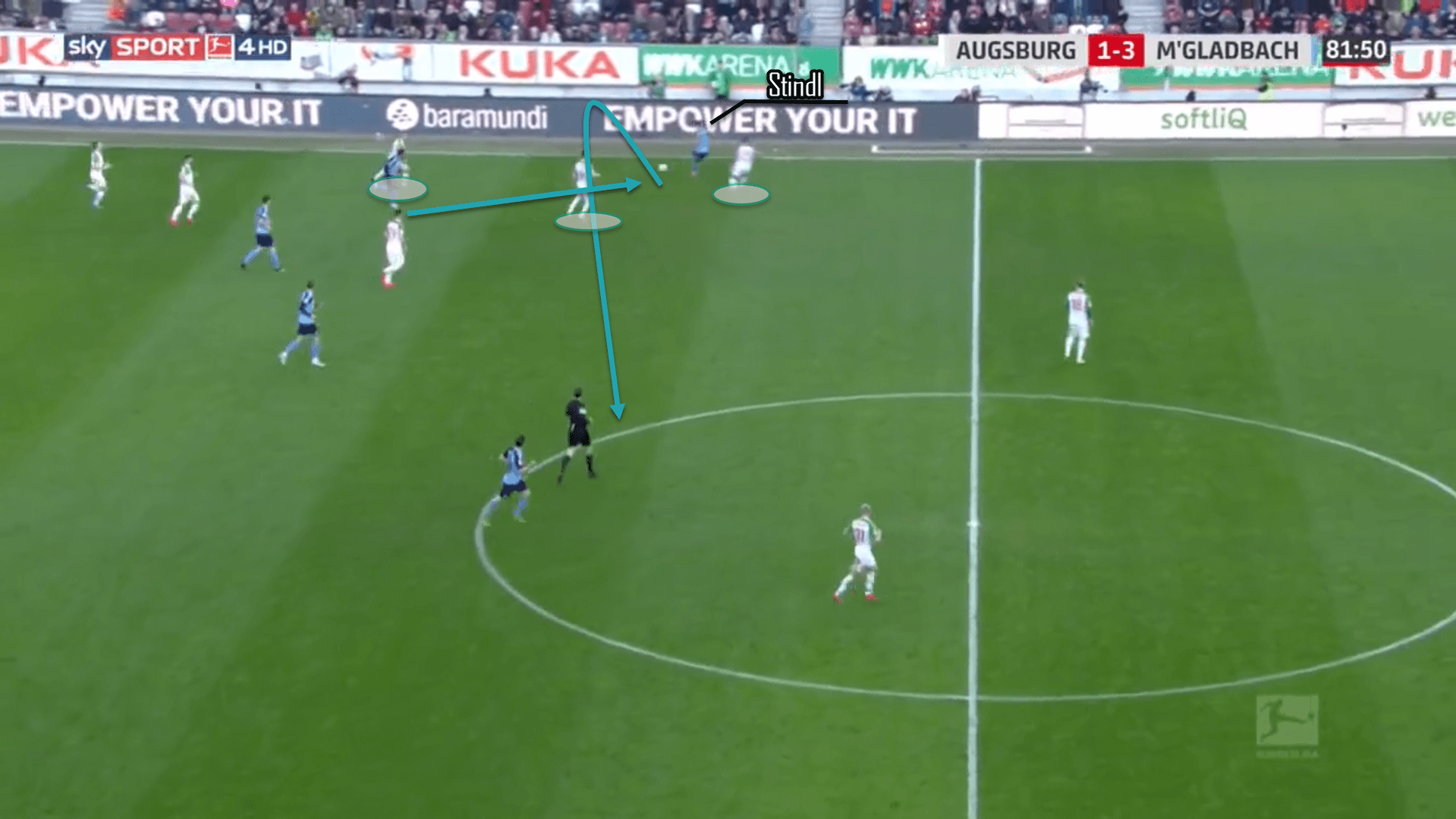 In this example, we can see Stindl receive the ball and the opposition team have started an intense press due to the ball being in a wide area and Stindl has no clear passing options. Stindl is able to chip the ball over these pressing opponents and he can find Hoffman in a central area, breaking the press from the opposition.

Not only is he a good offensive player, but Stindl’s defensive work is also impressive. He presses the opposition well, averaging 23.6 pressures (28% successful) per 90 throughout 2019/20. He also averages 1.84 recoveries in the final third, showing that he helps defend from the front. 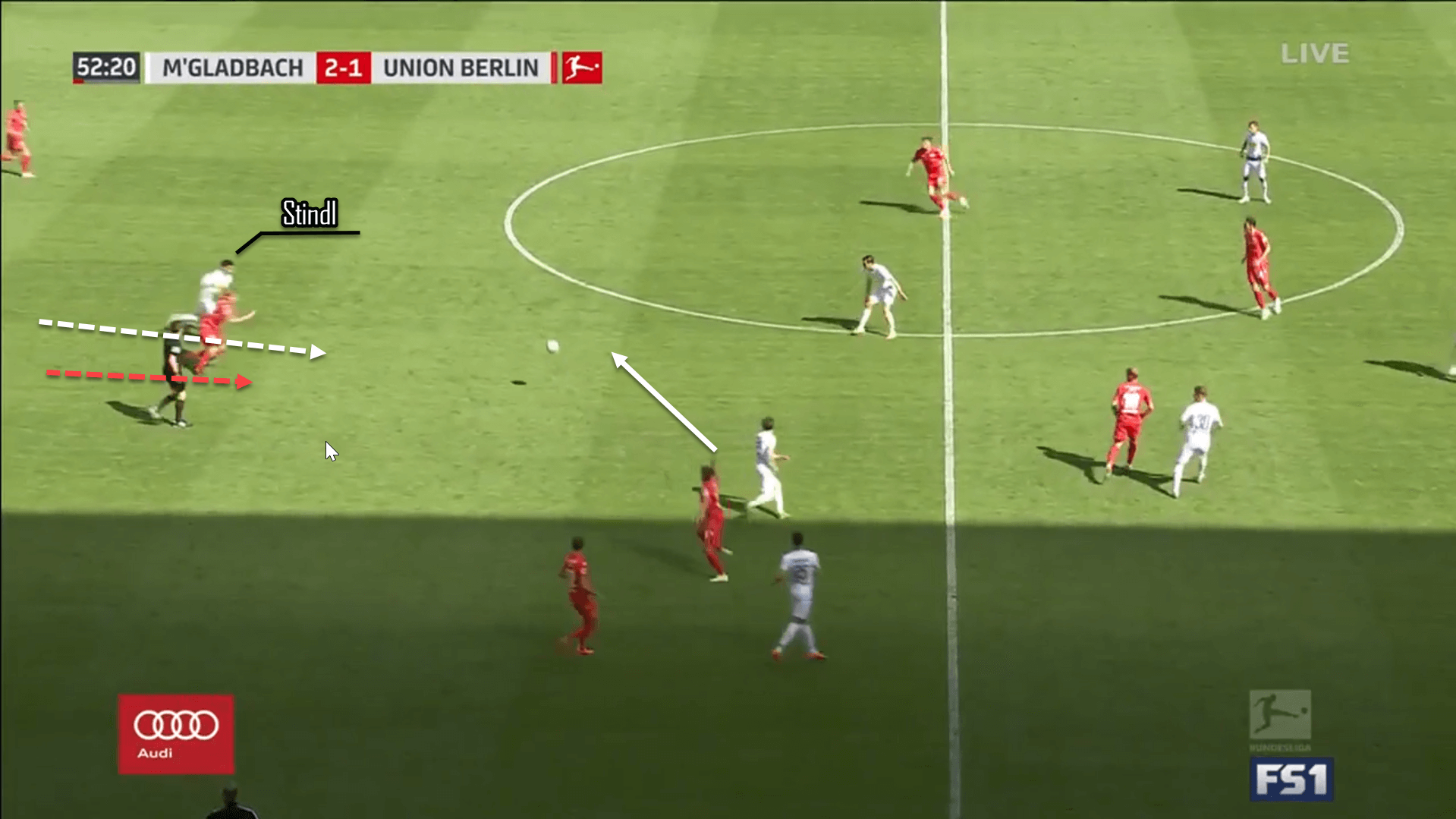 In the above example, we can see that the loose ball from a contested header looks to be landing at the feet of the opposition player. However, Stindl is able to get an impressive tackle on the player and then he can release his winger down the right flank. This catches the opposition side out due to the fact they are not in a settled shape and their transition into defence is slow as the turnover was not expected. 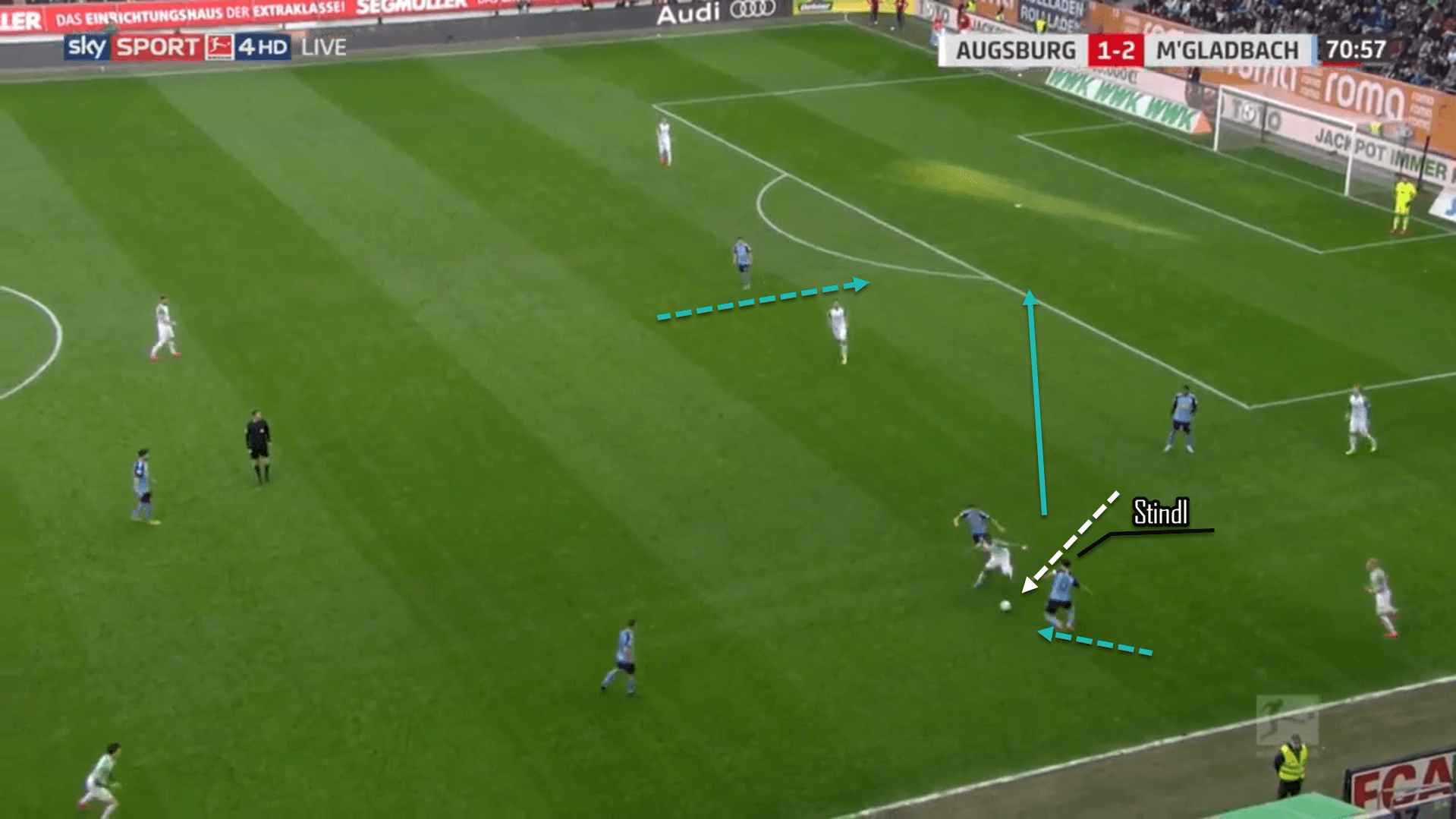 As shown in this scout report, Stindl is a great asset to Gladbach both with his defensive actions but predominately in his offensive ones. His ability to find spaces in matches helps with progression and also has helped him to score nine goals in the Bundesliga throughout 2019/20. While the analysis has also shown he is also a great creator through his passing and movement.

The 31-year-old is a crucial player in Gladbach’s side, with leadership to go with his other qualities. With the partnership of Thuram and Plea in the forward areas, Stindl dropping into the #10 for next season permanently would not be surprising, especially because of how he can operate between the lines. His added goalscoring ability would help Gladbach. If he carries on his form from this season into next, it would be likely that the German would receive a new contract at some point, with his running out at the end of June 2021.