After winning the League One title, Coventry City will be playing in the Championship next season for the first time since 2011. They earned plenty of plaudits for the way they managed to balance an attractive style of play with a resolute defence: the Sky Blues conceded a league-low 30 goals last term. When the season was brought to a halt due to coronavirus, City were seven points clear of third-placed Oxford United. Therefore, they deservedly earned promotion via the points-per-game formula.

A club that were recently stuck in the abyss of League Two with crippling financial problems, the sleeping giant of Coventry seems to be reawakening. Former Manchester United striker Mark Robins is at the helm, and it’s fair to say he’s done an excellent job in Warwickshire. As they prepare to end their Championship hiatus, they’re persuading players from across Europe to join the Robins’ revolution.

One of those new recruits is right-back Julien Dacosta. The Frenchman joined Coventry from Chamois Niortais after his contract with the Ligue 2 club expired. This scout report will provide a tactical analysis of Dacosta’s strengths and weaknesses.

24-year-old Dacosta played 2,004 minutes in Ligue 2 last season, spanning across a total of 22 matches. Chamois Niortais predominantly played with a 4-2-3-1 system last term, with Dacosta on the right side of the back four. That will be the key difference when he plays for Coventry, as a key part of Mark Robins’ tactics are to play a back three with wing-backs. It seems likely that he’d initially be the back-up for first choice right wing-back Fankaty Dabo, who enjoyed an excellent campaign. We’ll go into more detail on that a bit later on in the analysis. 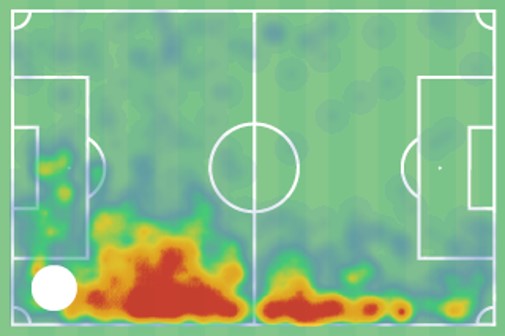 However, Dacosta’s heat map does show that he looks to get on the ball higher up the pitch. The green inside his own box shows the narrow positions that he often takes up when defending against counter-attacks. This is another interesting point for Coventry to consider: would he be able to slot in as a right-sided centre-back as well, if they suffer from injuries?

1 vs 1 defending and defensive duels

When he’s up against a winger, Dacosta is quick, athletic and he reads the game well. He likes to defend on the front foot, showing aggression to engage the opponent and win the ball back. The former Marseille defender averaged 0.76 tackles per 30 passages of opposition possession, and he got involved in 7.72 defensive duels per 90 minutes. Both figures put him in the higher echelons for this metric compared to other Ligue 2 full-backs last season.

In the image below, Dacosta has just advanced from a deeper position to close down the man on the ball. 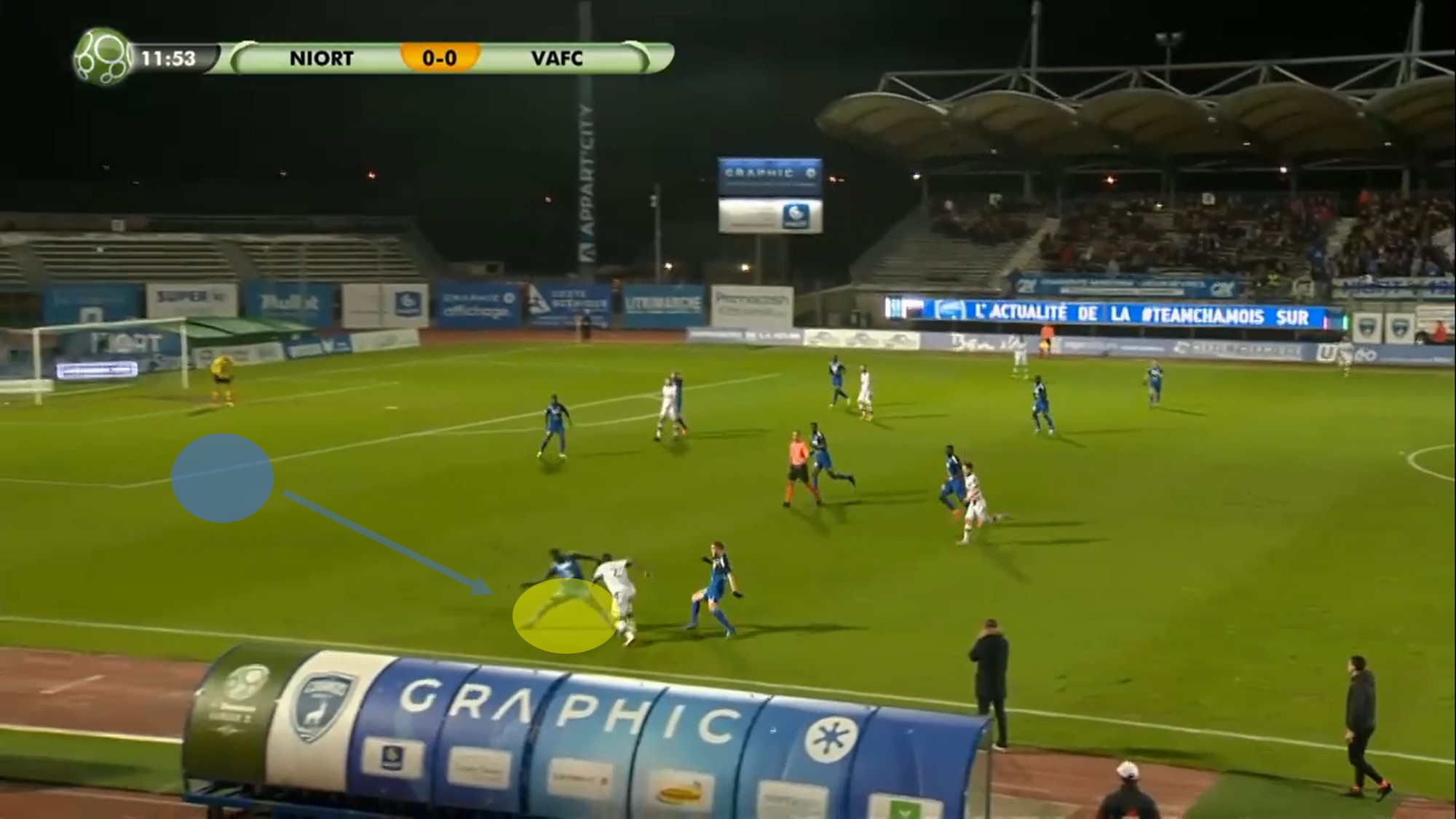 This is potentially a risky strategy. If the opposing winger successfully knocks the ball past him, he’d have a lot of space to attack in, as Dacosta was so far ahead of the rest of the back line. Because they’re so close to the touchline, he cleverly shows the winger down the outside, knowing that it’d be very hard to get around him. As the winger attempts to take the ball inside, Dacosta opens his body to claim the ball with his left foot. Despite it being his weaker side, he manages to take the ball cleanly and strongly.

Below is another example of how he gets his body shape right in a similar situation, albeit in a central position. 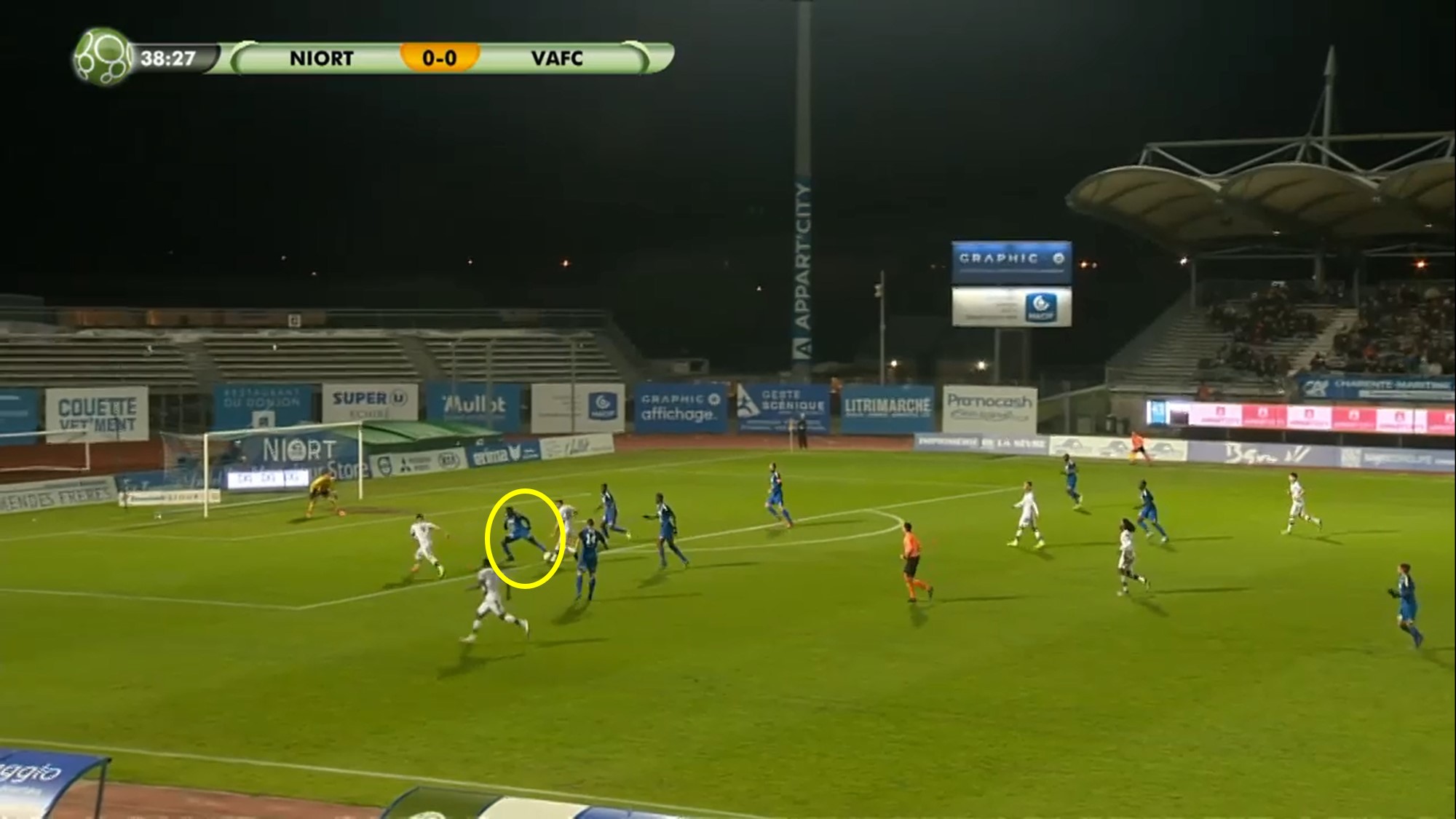 This time he’s outnumbered in a 2vs 1 scenario, but he defends expertly. He cuts off the passing lane with the right side of his body, meaning that he forces his opponent to try to take the ball past him on the inside. Then, he times the tackle perfectly with his left foot as the Valenciennes man tries to take him on.

Dacosta’s eagerness to win the ball back can sometimes leave him out of position. On average, he committed 1.48 fouls per 90 minutes in the French second tier last season, quite a high number compared to a lot of his fellow full-backs. A lot of these fouls happen when his opponent has possession with his back to goal. Instead of jockeying them backwards, Dacosta sometimes goes through the back of them to try to win the ball.

His eagerness to win possession is seen in the image below. 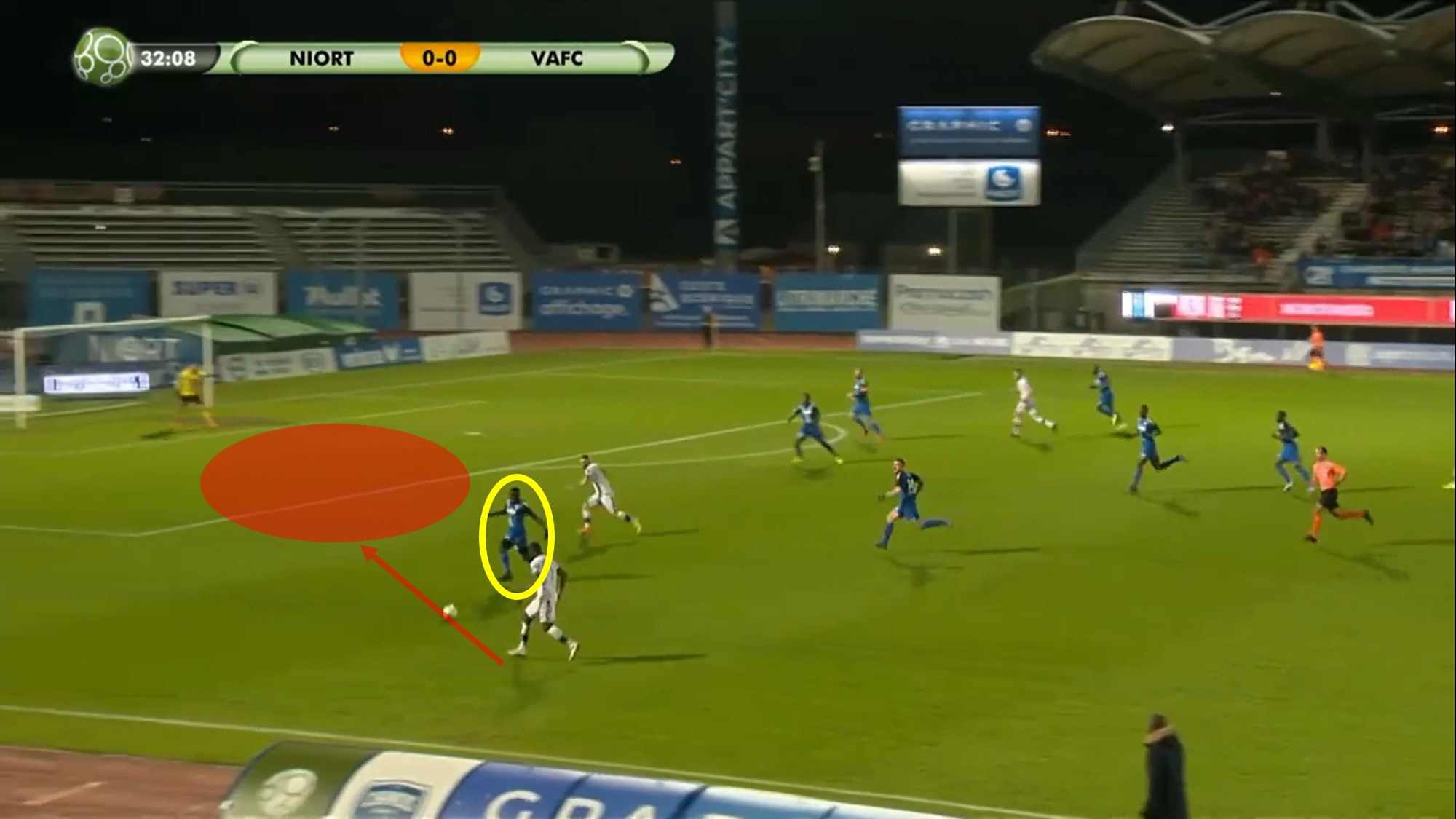 Instead of checking his shoulder to see a man behind him, Dacosta applies pressure to the ball carrier to win it back. However, he’s got too much ground to make up. This meant it was easy for the man in possession to play the ball in behind him. Due to that, Dacosta was taken out of the game. He’d have been better off sitting back and trying to delay the attack until one of his teammates got back on the cover. To develop his game, he needs to learn when to try to win the ball, and when to be a bit more conservative, delaying counter-attacks so his teammates can get back and help him.

Another interesting element of his play is the narrow positions he takes up, particularly in defensive transitions. It could be a tactical instruction, but Dacosta is often too narrow when opponents are countering. 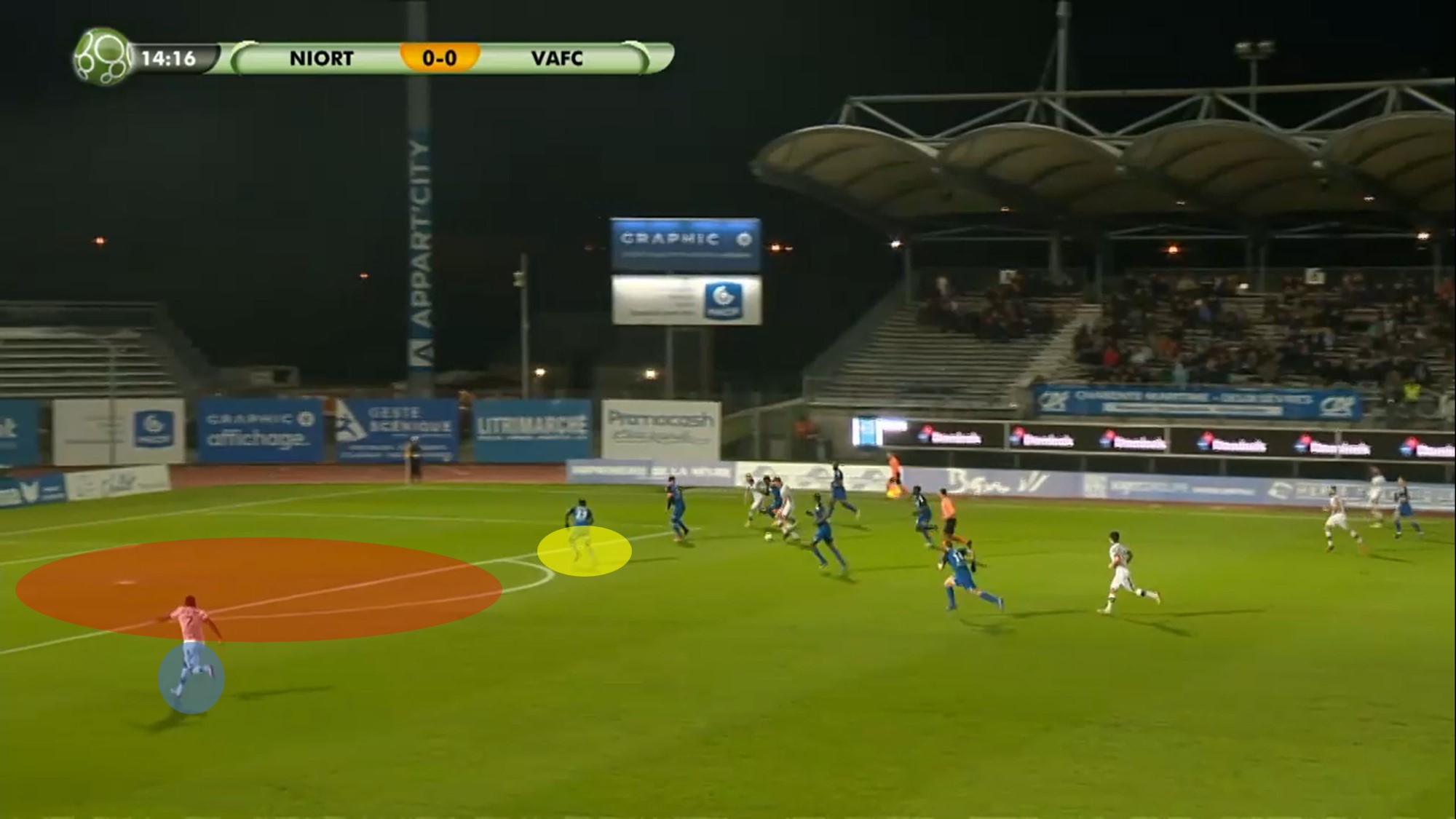 In the image above, the Frenchman has been sucked into the left side of the pitch to try and affect the ball. However, his attraction to the ball has left the opposition’s left-winger in acres of space. If the man in possession got his head up and switched play, Chamois Niortais would have been in huge trouble.

A key area of the game that Da Costa will have to master next season is his attacking play. As we mentioned earlier, Coventry usually play with a back three, so he’d be most likely play as a right wing-back instead of a full-back. The 24-year-old has shown his attacking quality at times this season, especially when you consider that his Chamois Niortais side finished third from bottom of the table.

Dacosta likes to find space by starting his attacking runs from deep and picking a good time to attack the opponent’s defensive line. 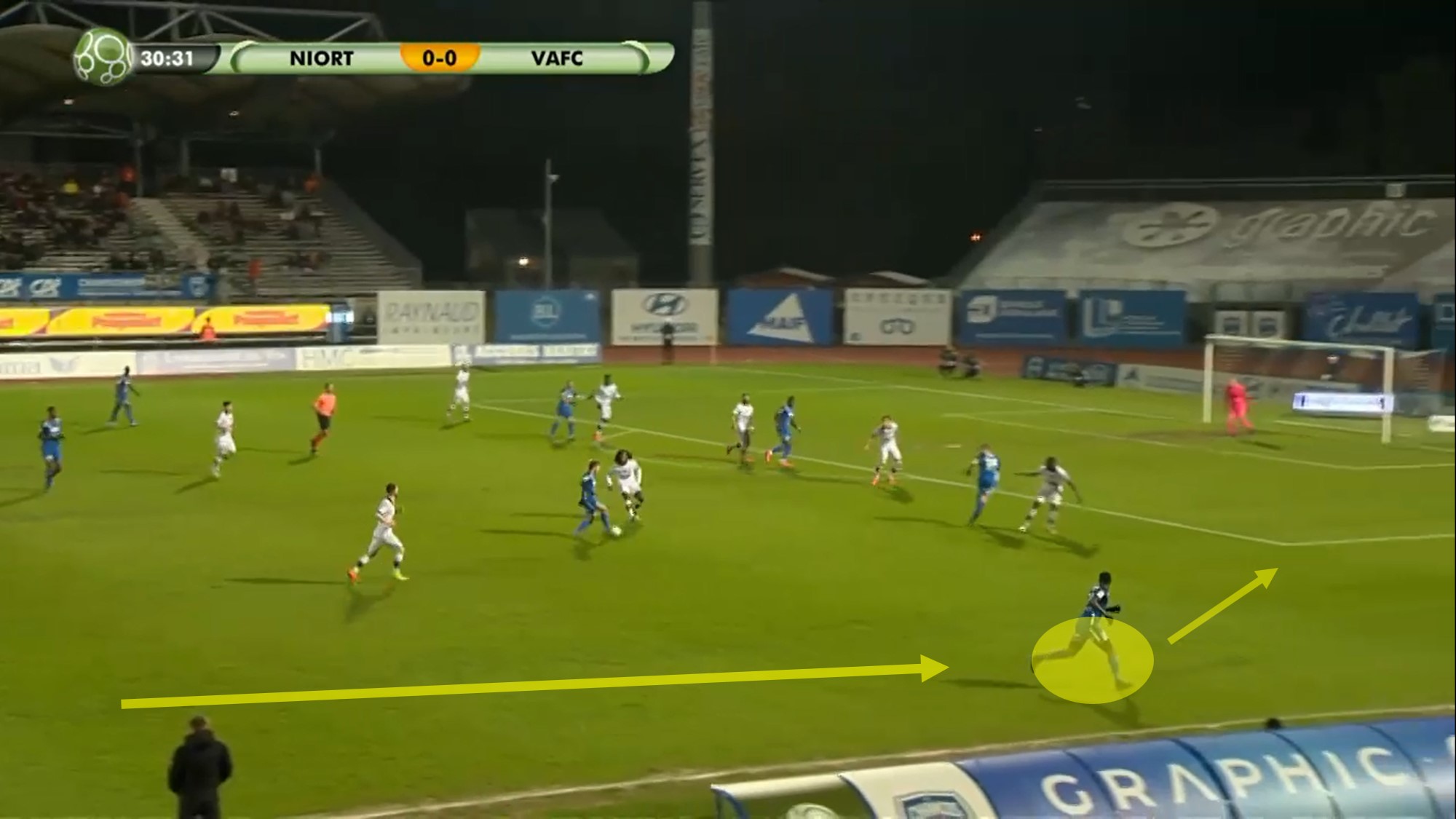 As you can see, he’s waited until the right-winger has attacked the space between the left-back and left-sided centre back. Dacosta knows that the full-back will be pinned in narrowly because of this, so he picks that moment to move into an advanced position.

The former Marseille man plays with his head up, shows a good appreciation of where his teammates are in advanced positions and uses the ball well at times. In the image below, he’s just made a run to the byline, after playing a neat one-two with his teammate. 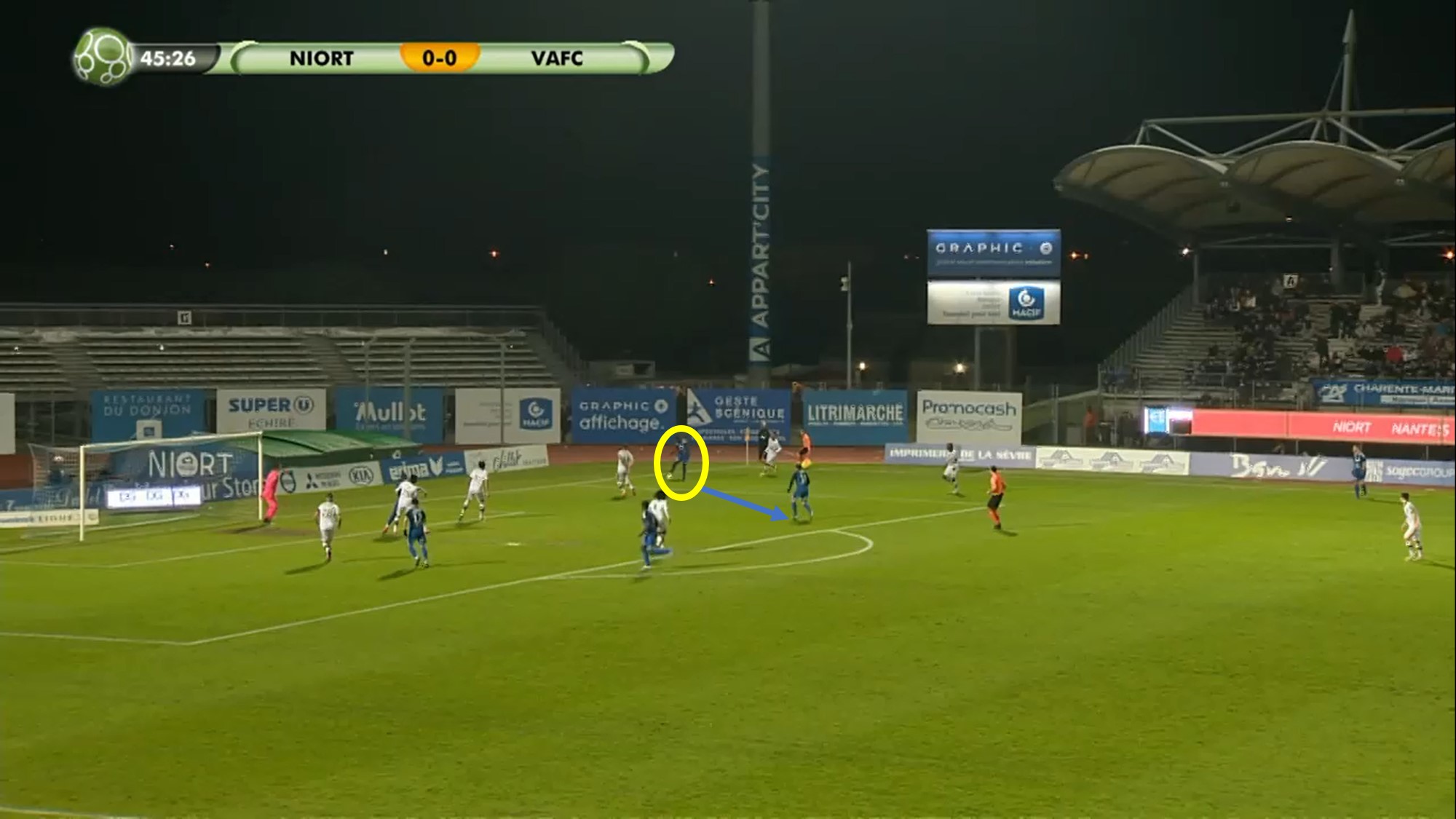 Dacosta will often look to play neat one-twos with Niortais’ right-winger, instead of taking the riskier option of trying to take his opponent on. When he plays the pass, he’ll burst quickly down the line to receive the ball in behind the opposing full-back. In the image above, he then has the presence of mind to look up at the byline and pick out a teammate in space.

An area that Dacosta could improve on is his longer passing from deeper areas. He’ll often get his head up and will intend to play the right ball, but it doesn’t always come off. In the image below, he’s attempting to play a ball into the inside right channel for the striker to run onto. This is shown by the red arrow and circle. 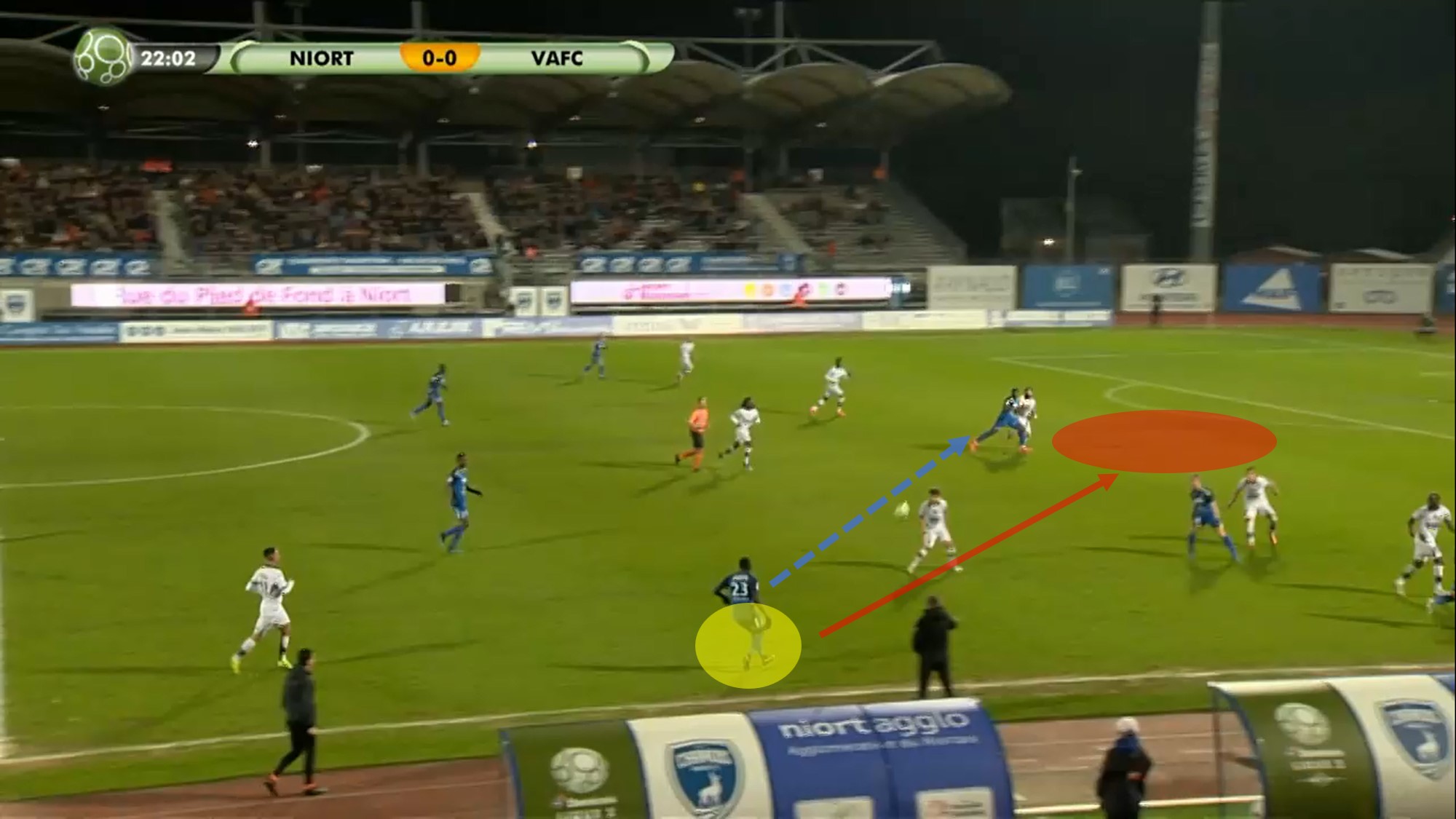 However, he miscues the pass and it ended up going in the direction of the blue arrow. Because the striker had made his run across the defender’s outside shoulder, he was unable to shift his body weight to change direction.

The extent to how much Dacosta will play will be determined massively by the form of first choice right wing-back Dabo. It’s widely accepted that Dabo, a product of the Chelsea academy, will continue as Coventry’s first choice in that position.

A look at the stats does little to go against that theory. We went into the key metrics for an attack-minded full-back or wing-back to compare how Dabo and Dacosta performed in their respective divisions. With the added context point of different leagues having different styles, we ranked both players against their fellow full-backs in their leagues. Using percentage rankings, we were able to see who performed better in each area by giving them a ranking from 0-99. The higher the ranking, the better the score in comparison to other full-backs in their league. 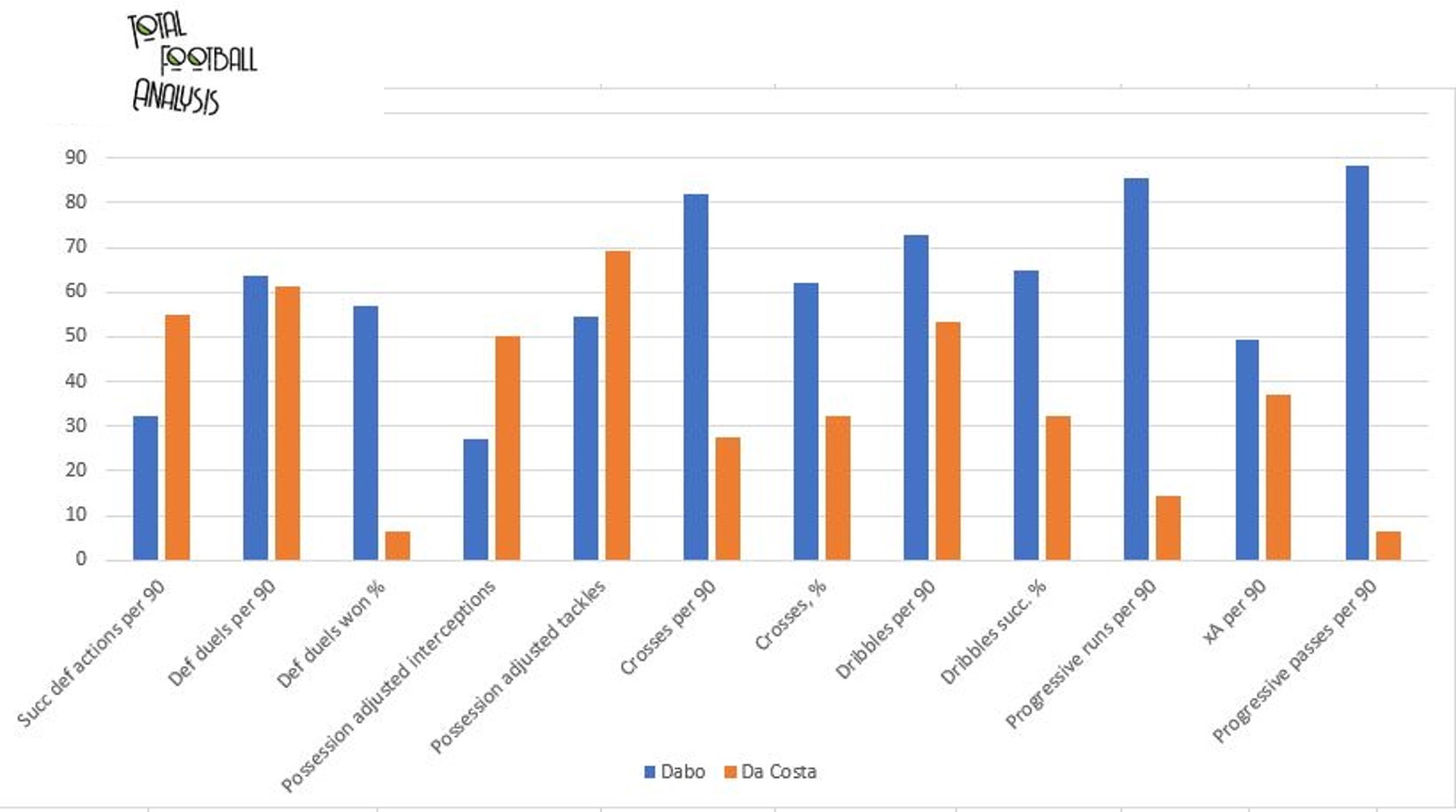 Dabo’s attacking stats are inflated by the fact he played as a wing-back for a team who won their division, whereas Dacosta played as a full-back for a struggling team. However, Mark Robins may be a bit worried about the difference in progressive passes played by the pair. Another point of concern could be the fact that Dacosta only won 52% of his defensive duels last season, which was very low in comparison to other Ligue 2 full-backs. This could partly be down to his eagerness to win the ball, even when it’s not the best option. Therefore, he enters a few defensive duels that he’s a massive underdog in.

On the other hand, the graphs reflect how aggressive Dacosta is in a more positive light, as he scores better than Dabo for successful defensive actions per 90 minutes and possession-adjusted tackles. Of course, the fairest time to judge Dacosta will be after he’s played a sizeable amount of games for the Sky Blues.

As a free transfer at 24, the addition of Dacosta looks to be a shrewd piece of business by Robins. He’s a risk-free signing who hasn’t yet reached his peak. It will be difficult for him to start games over Dabo, but he’ll certainly be given chances to impress throughout a packed 2020-21 campaign. As a natural full-back, he’ll provide Coventry with flexibility if they decide to change to a back four in the middle of the season.