The second-highest football league in Denmark saw plenty of action in 2019/20. After many high-scoring events in the first 29 rounds, the main questions are already answered. With four games to go, Vejle have a comfortable 7-point lead which means they will be promoted to the Superliga. Behind them, Viborg are getting ready for the relegation play-off hoping they can join Vejle in the top-tier league.

In this data analysis, we will rate the performance of players in the NordicBet Liga and analyse who has what it takes to play in the Superliga. There are always hidden gems in lower leagues who might not get the attention, especially if their team is not promoted. In this article, we will focus on these defensive players and provide insight into the exciting world of football in Denmark.

First, we will go through the collective statistics to identify the best players at each position. To determine who is ready for the next level, we will compare NordicBet Liga players to a standard Superliga player in the same position. We are going to use radar charts based on percentile ranks as the 50th percentile will be our standard player reference point.

The 2.95 goals per game proves that the NordicBet Liga is indeed a high-scoring league where defences are secondary most of the times. Although, there are some exceptions where stabilizing the defence was a priority this season. Vejle’s great backline very likely earns them promotion as they kept a clean sheet in 50% of their games. Fifth place Fremad Amager comes second with 40%. In terms of conceded goals, Vejle (26), Vendsyssel (34) and Viborg (40) are the strongest teams but HB Köge also had a defensively satisfying season.

For the individual defensive contribution, we first analysed the relation between successful defensive actions and interceptions. Players appearing high on both ends would likely find success in the Superliga as well. Possession-adjusted interceptions aim to smooth out the discrepancies caused by dominant teams whose players would intercept fewer balls in 90 minutes. Interestingly enough, both categories are led by players from Vendsyssel despite being only sixth on the table. Jacob Hjorth only played 674 minutes mostly because of a head injury but Sören Henriksen was ever-present in the starting eleven. Simon Trier Jakobsen switched clubs in the winter arriving from Viborg to Kolding, therefore the 22-year-old’s statistics are from both teams.

The centre-back analysis also includes the success rate of both defensive and aerial duels. As we can see, it is quite rare to stand above average in both metrics and these percentages could change in the top league against stronger forwards. Hjorth tops the charts again in the defensive duels but it is the New Zealander, Nikko Boxall of Viborg who can be trusted in defensive (above 70%) and aerial duels (above 60%) as well.

While it is not a mandatory skillset, being able to launch dangerous passes towards the attackers can define an all-round centre-back. In our case, dangerous pass ratio means how many different passes (passes to the penalty area, final third passes, deep completions etc.) a centre-back tries divided by forward passes. The dataset might be biased as the first four players played significant minutes at full-backs. Therefore, Magnus Wörts, Hjorth and Christian Enemark lead the chance creation chart among centre-backs.

This, supplemented by the ability to progress the ball, completes our centre-back profiles. Henriksen, Marcus Mlynikowski and Jacob Bonde are all experienced players in the NordicBet Liga and they are followed by the younger wave of Wörts, Lars Kramer and Marian Huja. 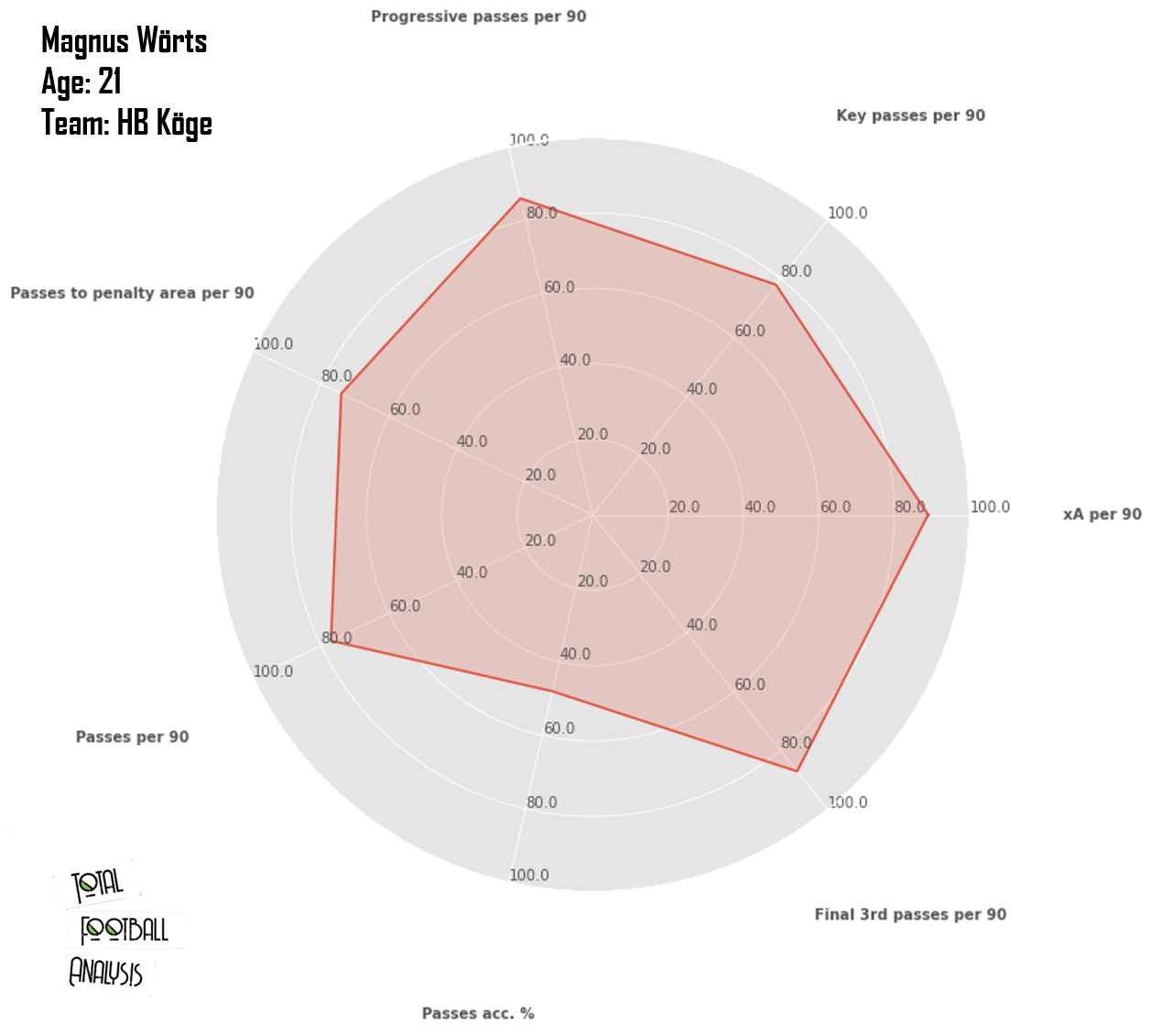 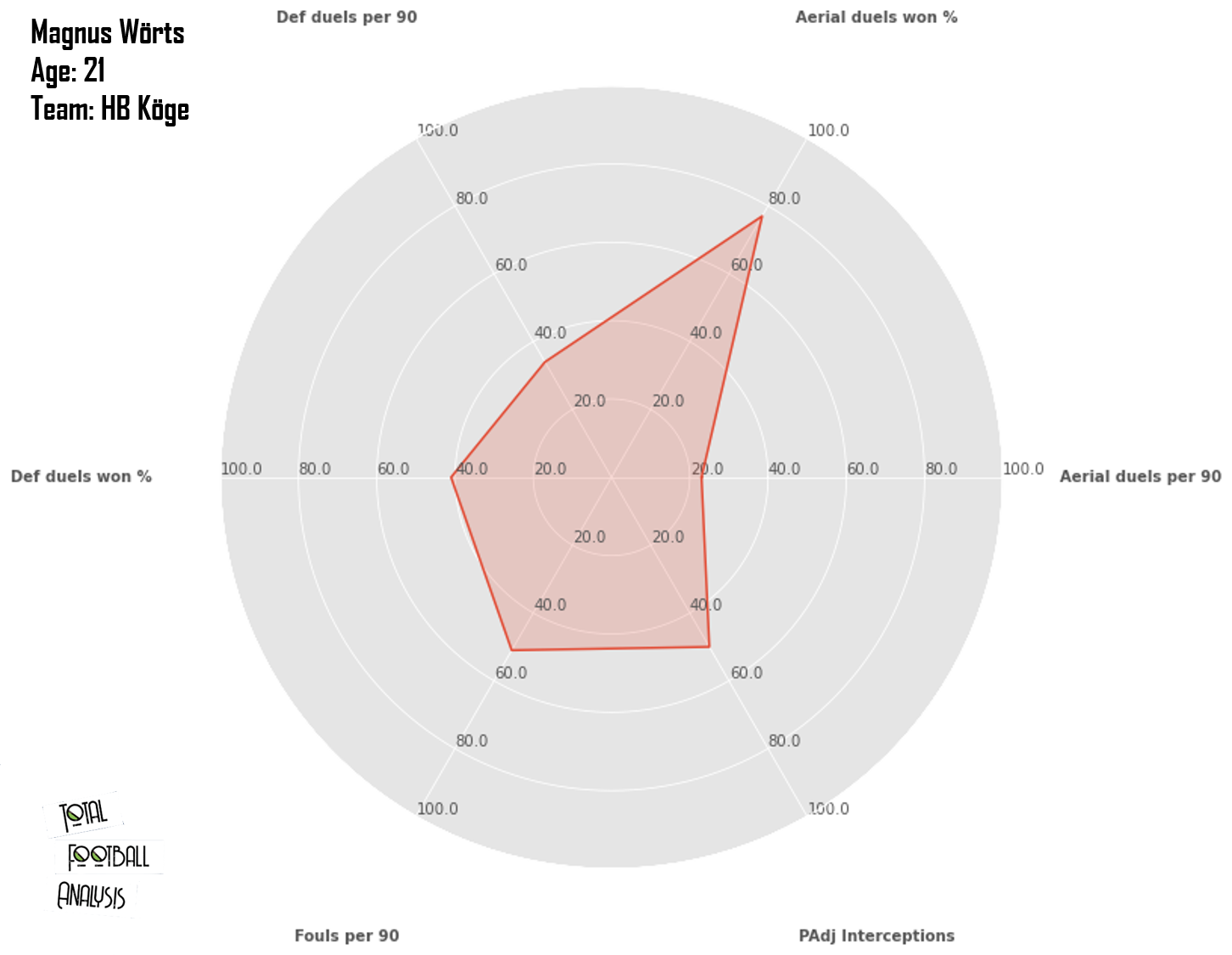 As there wasn’t a clear contestant among young players with outstanding statistics in both the defensive and attacking aspect of the game, my choice fell on Magnus Wörts. The Nordsjaelland academy product joined Köge in 2019 and thanks to him, the club stabilized their defence. The nine defeats suffered are the third least in the league (behind Vejle and Viborg) and the 1.41 goals conceded looks great in this league. As for Wörts, he might get calls from Superliga teams as he could be a fine addition into the defence or in the defensive midfielder position. Aarhus could be a club to try and make a move for him as their defence could use a young, dynamic player.

Following a similar pattern as the first part of the analysis, we are taking a look at the defensive data first. Mikkel Jule, the 20-year-old right-back recorded the most interceptions this season while Magnus Fredslund’s high number of defensive actions is also due to his position at central midfielder. Simon Schultz Christensen and Malte Amundsen are indeed true full-backs who were also busy defending this season.

A crucial element of the full-back position is putting in quality crosses into the box. Deep completed crosses per 90 minutes is a good indicator of quality while we can see it is concerning all crosses. Frederica’s Jacob Buus and Viborg’s Christian Sörensen lead in both metrics and their attacking contribution couldn’t be underrated. Sörensen’s expected assists stand at a ridiculously high 7.58 even though he only registered one assist.

Pierre Larsen shared playing time at right-winger and right-back as well but his five assists show the ability of his fine chance creation at Fremad Amager. Another new name emerges as Abdoulie Njai is third in the ranking and will be interesting to see where he is headed after his contract expires at the end of July. 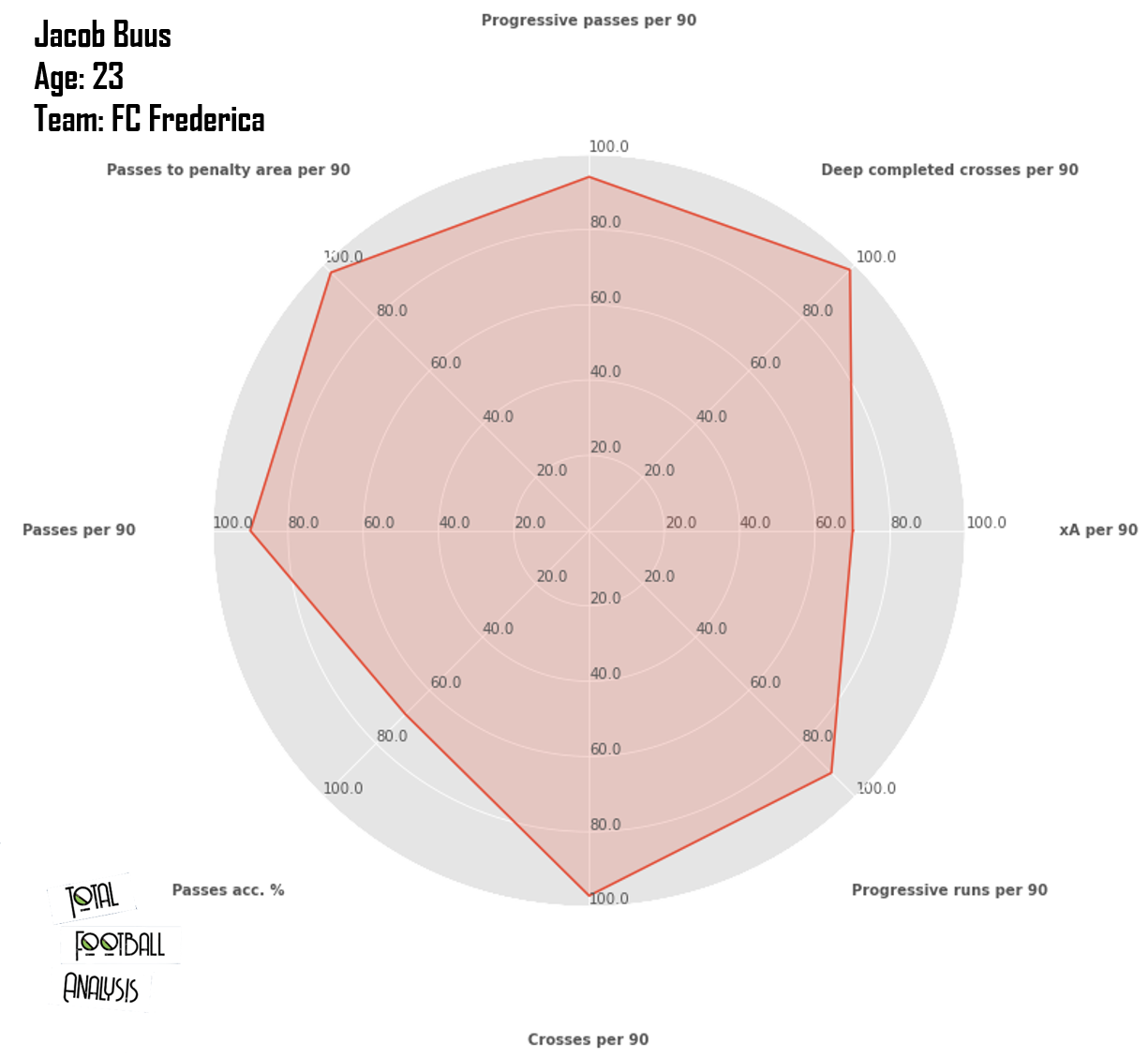 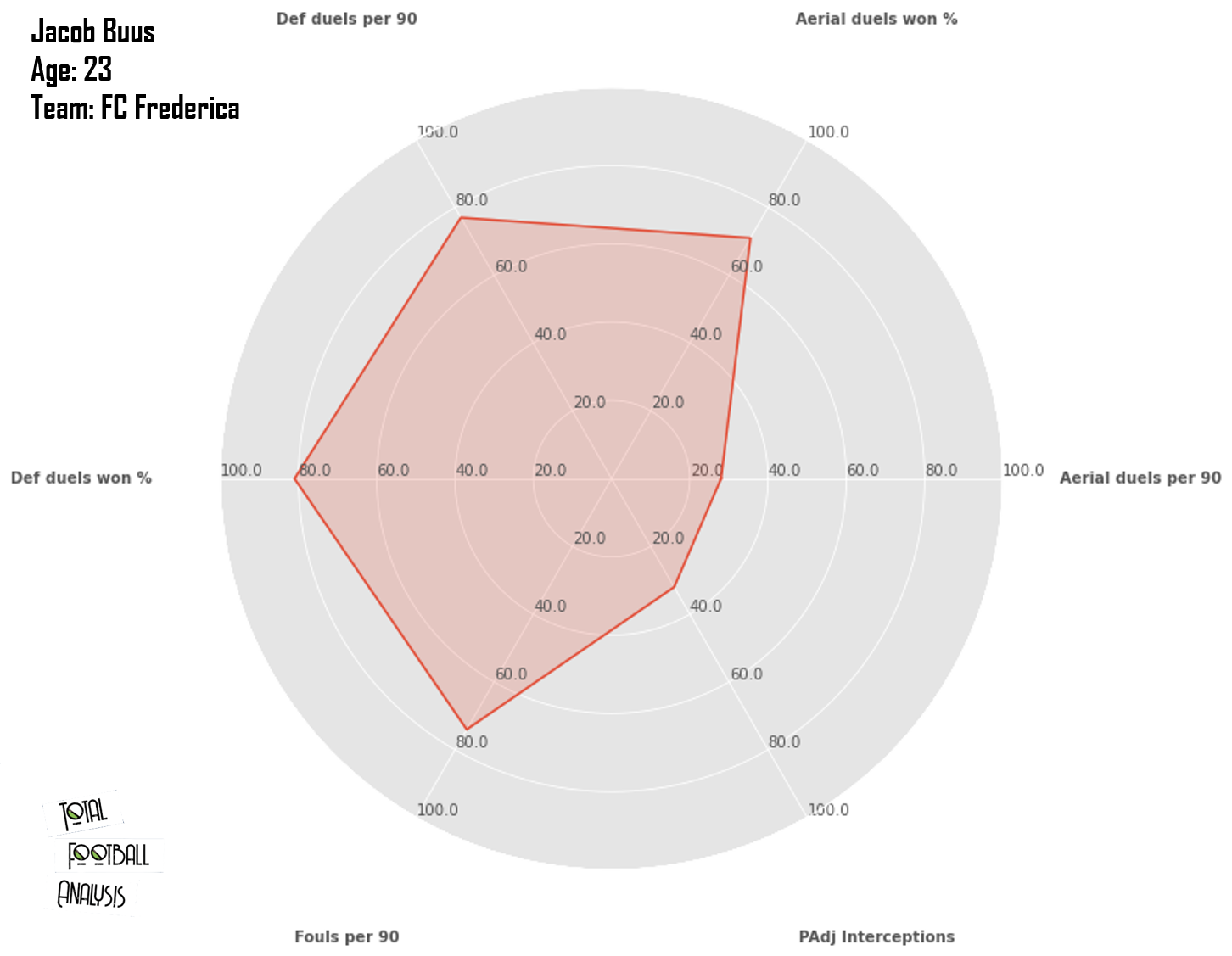 The choice for full-backs was easier and in fact, one of them already has a transfer arranged on 1st August. Jacob Buus will join AC Horsens on a free transfer after a fruitful season in the NordicBet Liga. It can prove a really smart piece of business as Horsens will have a replacement for 37-year-old Peter Nymann and Rune Frantsen. Moreover, together with the 16-year-old Jeppe Kjaer and the 23-year old Louka Prip, the team will have an incredibly talented right side with tons of upside in attacking. 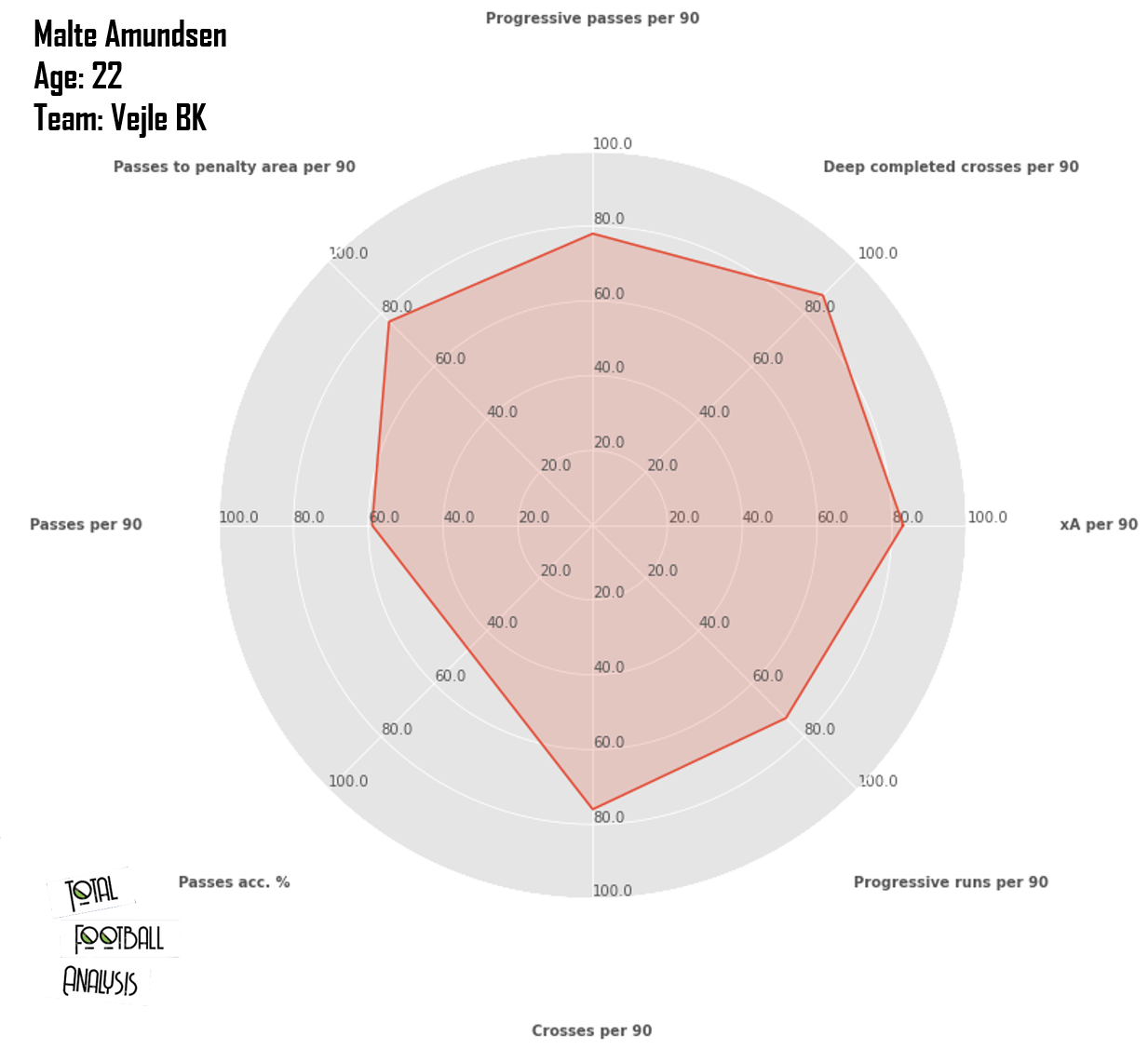 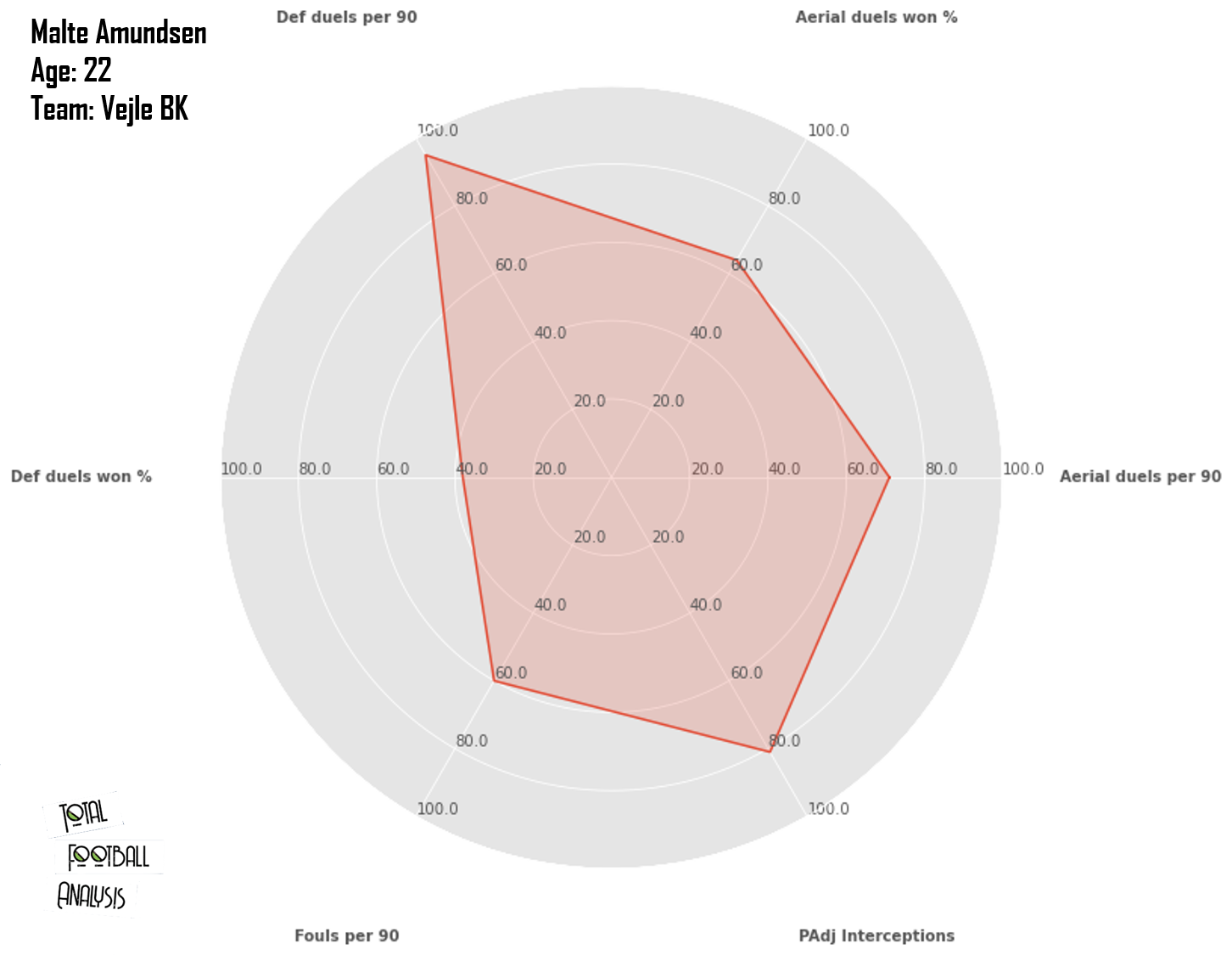 We can expect to see Malte Amundsen in the Superliga next season with Vejle. The 22-year-old left-back could be equally successful among stronger opponents as well, as the radar shows, he is above-average in most metrics. Chances are Vejle will be able to stay up in the league then there might be a big interest for Amundsen.

Defensive-minded midfielders are crucial for the success of the team. If they can become a pivot for their squad, equally taking part in the build-up phase or the attacking development, they are probably the most valuable particle. Here, we were trying to find young players with these criteria. Among midfielders over nine successful defensive actions per 90 minutes, we examined the success rate of defensive duels and interceptions. Only two athletes came up strong in both statistics, Hakan Redzep and Mathias Thrane, both 26.

Mathias Gertsen can be considered an attacking midfielder but behind him, Magnus Hauser and Felix Winther are two very talented players, both internationals and coming from prestigious academies (Midtjylland and FC Copenhagen). We can expect to see both of them returning to the first league soon.

In terms of the expected goals and assists, none of the players had an outstanding season but there were reliable performers like Sebastian Sommer with his three goals and six assists. 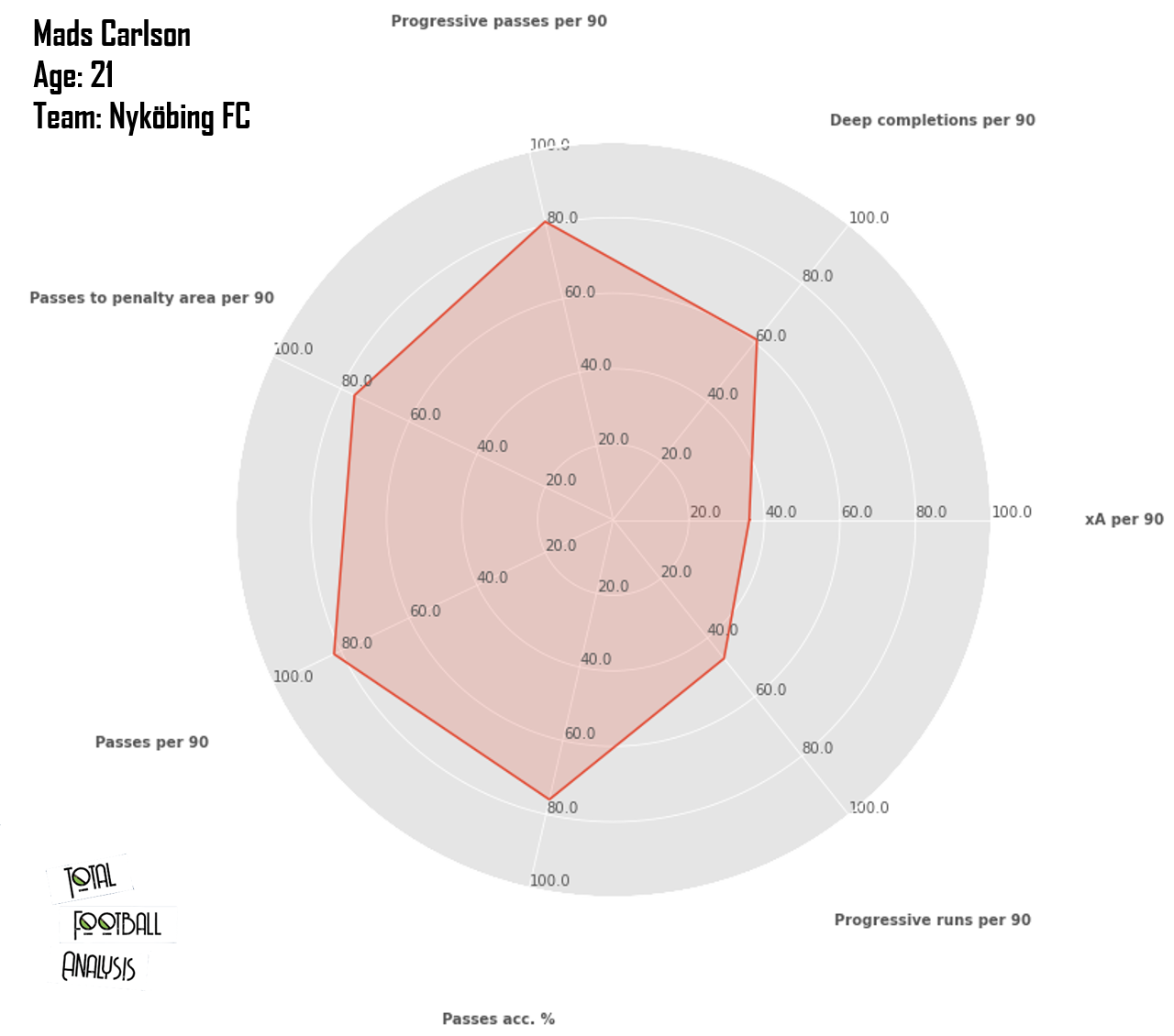 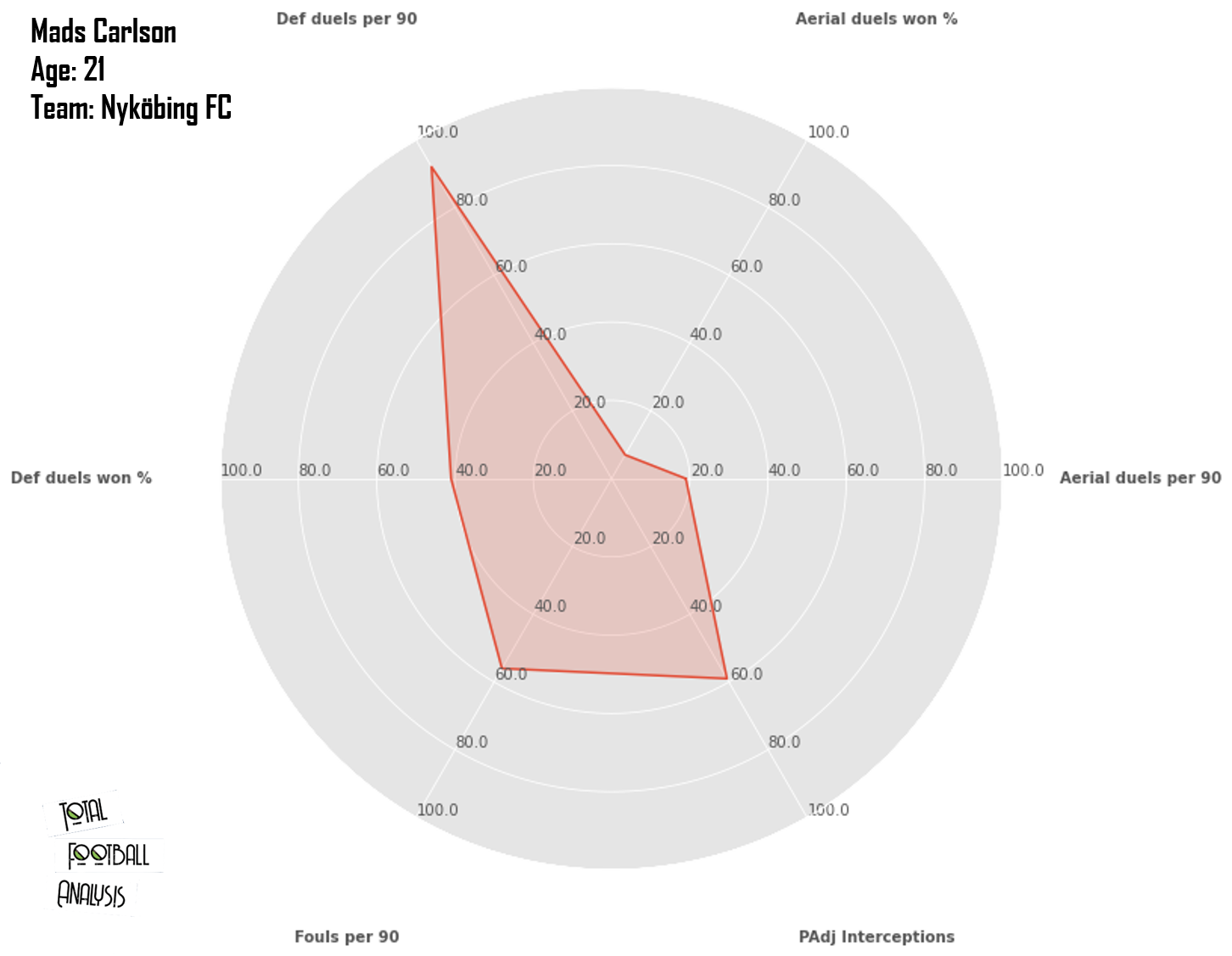 It is hard to pick a young talent who could perform consistently in the top league. Instead, we are going with a wildcard pick, someone who can be in for a surprise next season. Mads Carlson is just 21 but he already established himself as a reliable starter in the Nyköbing team. Once, he can sort out his defensive issues, he can grow into an all-round midfielder with great passing abilities.

The NordicBet Liga holds a lot of values in terms of young players who were once part of a big team’s academy but then they signed with a second-tier club. Now, these athletes are trying to show that they are capable of returning to the top flight. It is not unusual to see players starting in this league and then moving on to more successful paths. Manchester United legend Peter Schmeichel, the late AC Milan player, Jon Dahl Tomasson or the great Ajax player, Dennis Rommedahl all started their careers in the Danish lower league. Is it possible that we can witness a great talent in the NordicBet Liga? Only time can tell but until that we will continue looking.