After a relatively short discussion between club and player regarding a new contract, it was made very public knowledge that Jeremy Ngakia was to leave West Ham this summer. Since June 30 he has been free to talk with other clubs. The main names to be linked with his signature have been Schalke, RB Leipzig, both of the Bundesliga, as well as Watford and Liverpool. All this after making just five appearances for West Ham, but so convincing was his debut season in the Premier League that, understandably so, the demand for a young, English talent with no transfer fee attached, is a rather attractive prospect for many clubs.

This transfer isn’t without its risks. Free agents naturally demand a higher wage and sign-on fee than would be expected for a player with a contract at another club. Therefore, a player with such limited first-team appearances is going to be on a much higher wage than he would be otherwise. He was good in the five games he played for West Ham – not outstanding, but certainly good, and it was a pleasant surprise for the Hammers who had only given Ngakia a 12-month extension on his deal last summer. Nevertheless, Ngakia hasn’t performed like this over a prolonged period of time, and this is a gamble for the teams looking to bring him in.

Ngakia has played just 468 minutes of Premier League football and so we must take any of his statistics, whether good or not so much, with a pinch of salt because this is such a small sample size compared to the rest of the league’s right-backs. This is the equivalent of signing someone who had a good world cup tournament. You are looking at bringing in a player who has played a handful of games. So is Ngakia going to be an El-Hadji Diouf, or a Gilberto Silva…

This scout report and tactical analysis will give an analysis of Ngakia’s role at right-back and will give an insight into his tendencies, areas for improvement, and the tactics of a team where he may suit best.

A glimpse at Ngakia’s heat map, and we can see the kind of right-back that he is. The majority of the action is deep inside his own half with him rarely venturing north of the halfway line. Admittedly, a lot of this may well be down to the fact that he played as part of a West Ham defence that was pretty regularly under pressure, but nevertheless, you’d generally expect to see a more even spread between action in his own half and the opposition half with a more attacking right-back. 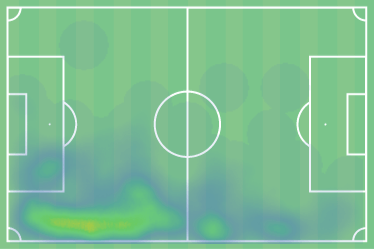 But this isn’t Ngakia’s game. He is a defensive full-back, and he’s proven to have excellent defensive statistics in his short career so far.

The most glaring outlier in Ngakia’s game is his phenomenal defensive duel record for West Ham this season. Involved in a vast amount of defensive duels per game with 10.96, he has an overall win percentage of 73.7% which is truly outstanding for any player at any age, let alone a 19-year-old new to the league. If we compare him to the rest of the right-backs under the age of 23 plying their trade in Europe’s top five leagues, we can see what an outlier he is. 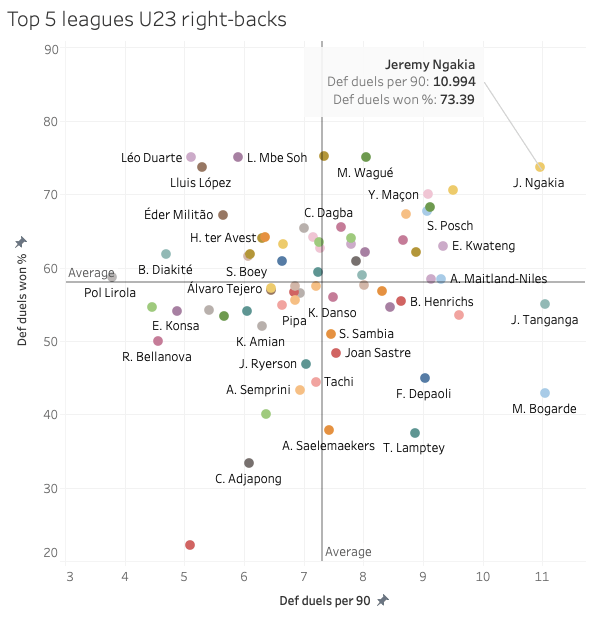 A stand-out performance was against Liverpool, playing up against Sadio Mane where he was a leading light in a West Ham defence that leaked three goals on their way to a 3-2 loss in that fixture, however, Ngakia won 84% of his 19 defensive duels in that game. To put Ngakia’s defensive ability into context, his defensive duel win percentage is the best out of any of the Premier League’s right-backs, with Cesar Azpilicueta just behind with 72.22% (but of course Azpilicueta has played 29 more league games this season than Ngakia and he has been a proven performer for years).

He’s very good at last-ditch tackles, and we saw this in the Liverpool game more than any other, where he won all three of his attempted slide tackles. However, this does hide a habit of ball-watching at times.

Below we see Mane slide the ball inside, past Ngakia. Ngakia turns to look at the pass, rather than dropping straight back into the defensive line. This leaves space for Mane to drive into a receive the pass back. 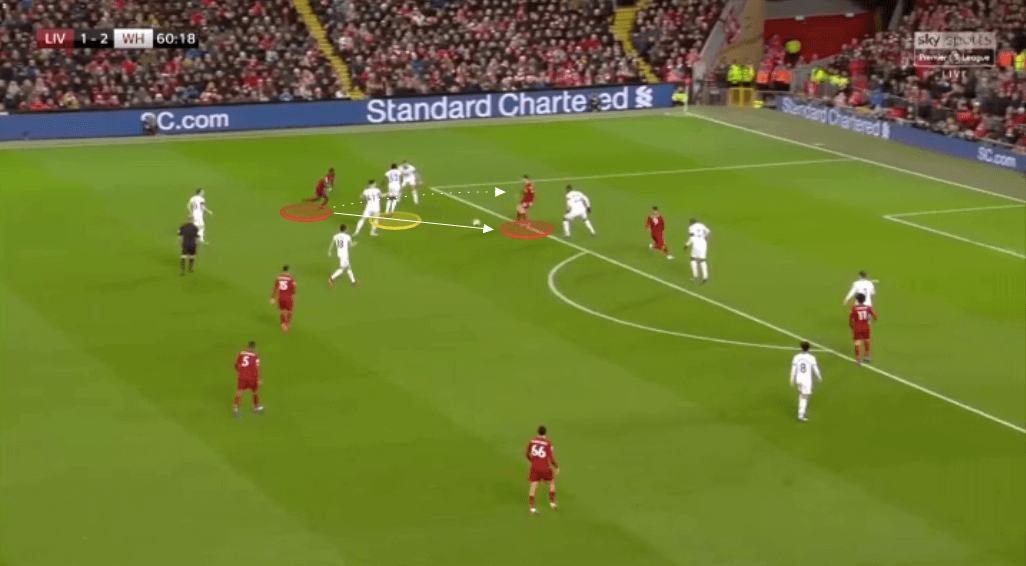 Ngakia timed his challenge beautifully in this example and won the ball, but it was a potentially risky challenge with a very fine margin for error. 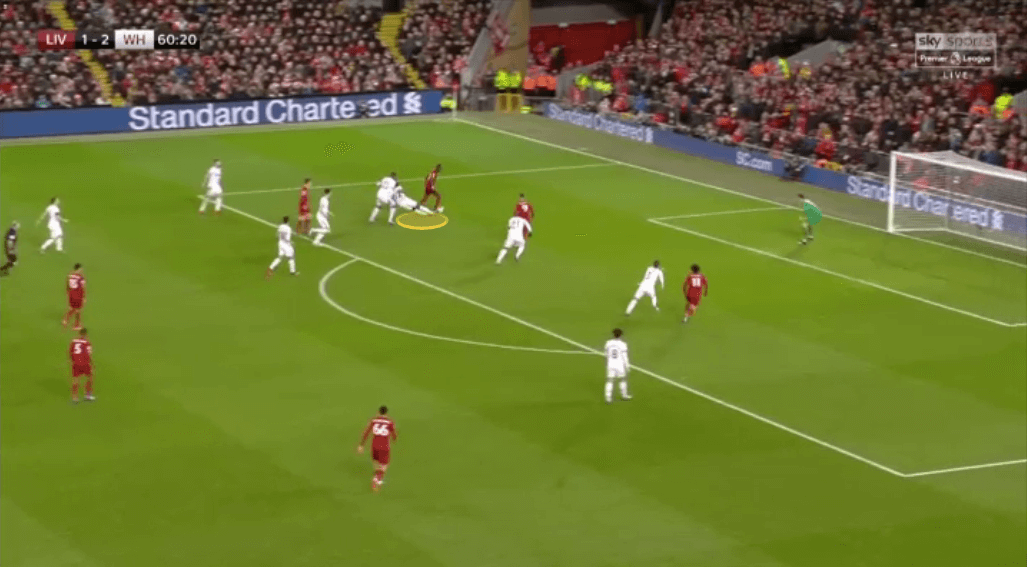 Ngakia isn’t the most patient defender and does dive in, however, so far he has got away with this and if anything it has worked spectacularly well for him. There’s the risk that teams will be more aware of this as he plays more games and aim to win fouls in dangerous areas or have players ready for this in 1 v 1 situations. We can see an example of him lunging in against Wolves in the image below. He wins the ball once again in this situation, albeit there is plenty of space behind him and had he missed this challenge, he could have left his teammates stretched and vulnerable. 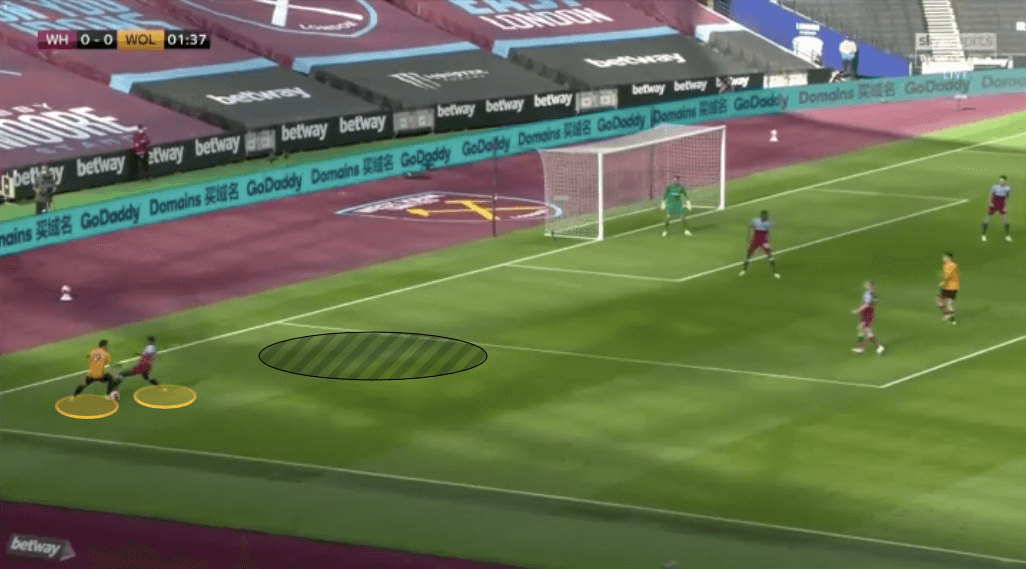 Aside from these defensive duels, he is also involved in a fair amount of aerial duels per game with 3.46. Ngakia is 184cm tall, or 6’0”, and is also very well built, so he has a physical presence and being tall for a full-back there’s the potential that he could be a solid performer in this metric as well. Unfortunately, he has won just 33.33% of his aerial duels this season, but because of his physical aspects and age, clubs will know they can work on this part of his game. If we look at this aspect of his game against the under 23 right-backs in Europe once again, we can see that despite having an above-average amount of aerial duels per 90, he is averaging a fair amount below the average for percentage won for this group of players. 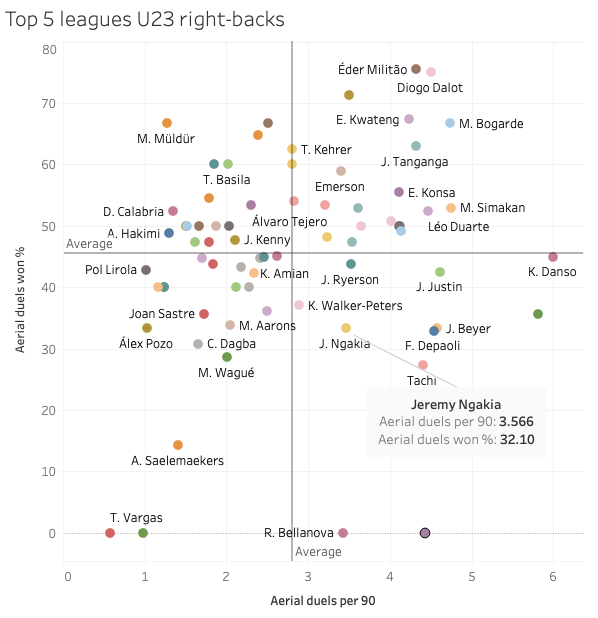 The aspects of Ngakia’s game that require the most development come in possession rather than in defence. He actually has very good ideas on the ball and can see a pass, however, his consistency of passing lets him down, and he sometimes takes on the wrong option or the weight of the pass lets him down.

There is a tendency to look a little early for the longer through pass over the top of the opposition defence and these passes can be a little wayward.

We can see an example of this below as he looks to play a pass over the top of the Wolves’ defence. The option to the yellow zone is really where you’d most likely want this pass – in between two defenders with enough space for the forward, Michail Antonio, to run onto without it getting too close to the goalkeeper. Unfortunately, this pass went to the red zone and was easily claimed by Wolves’ goalkeeper Rui Patricio. 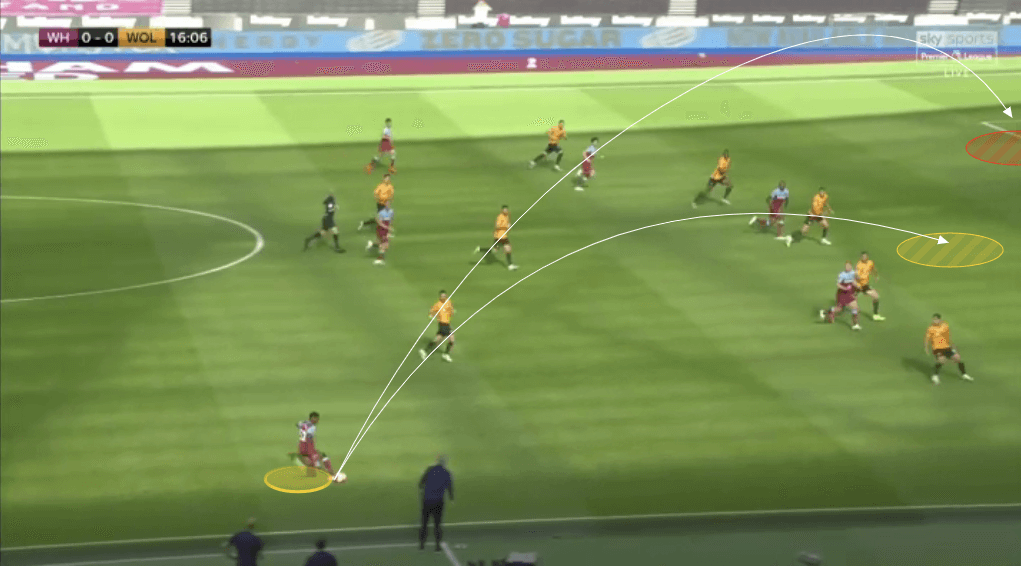 If we look at his crossing from the five games he has played (against Southampton he didn’t make a single cross hence the four images below), we can see that this is an area he needs to develop. He has completed just two of his 13 attempts this season, and in his last game against Wolves, he attempted six crosses without completing one. We can see that he isn’t the kind of right-back to take the ball all the way down the line and pull the ball back, but instead makes the majority of his crosses from the right flank, and doesn’t cut inside, and most of his crosses come from close to the 18-yard-line. 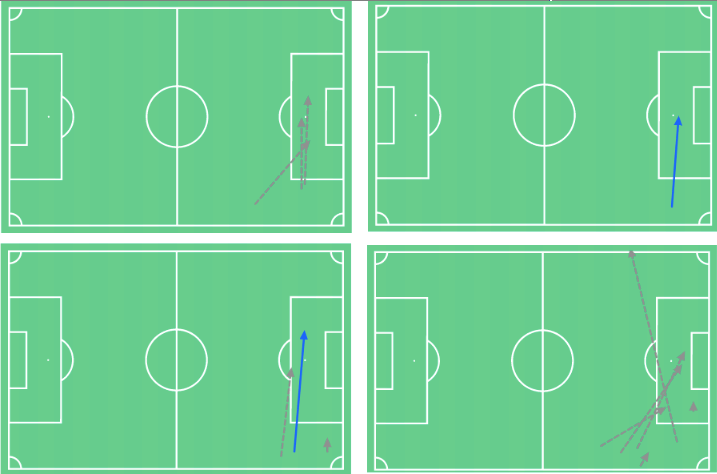 There are times where he puts the ball into nice areas though, like the example below, however, a good deal of his crosses seem to come at times where he is under pressure, or has a man right in front of him. 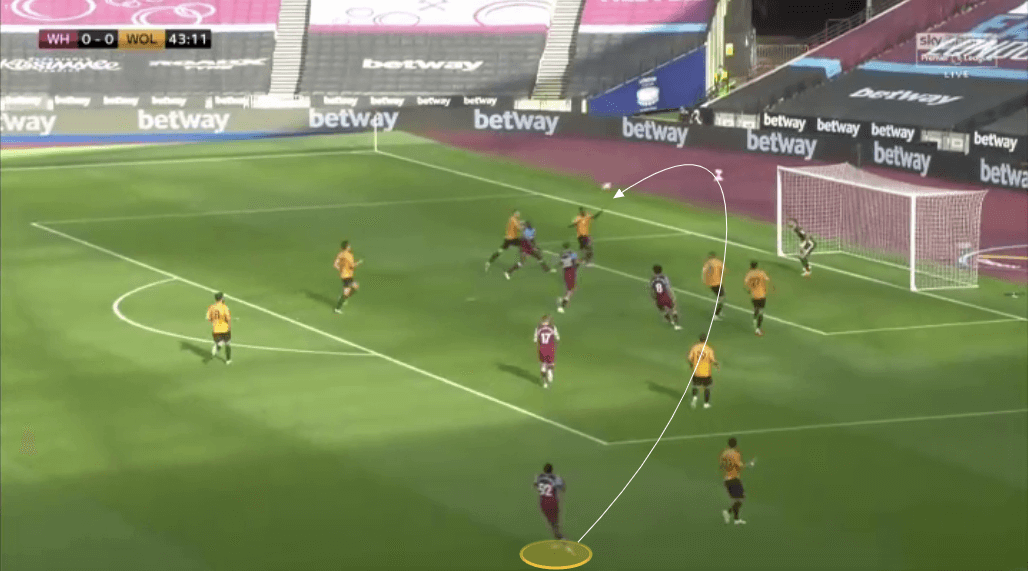 Of course, not every cross is going to come at a time when you have space to play it, but it’s interesting to see that hardly any of Ngakia’s attempts have come when he has space. He needs to work at creating this space for himself a bit better before making the cross, or potentially arrive into an attacking area earlier. He makes late runs to support in forward areas and by this time the opposition defence is often set. 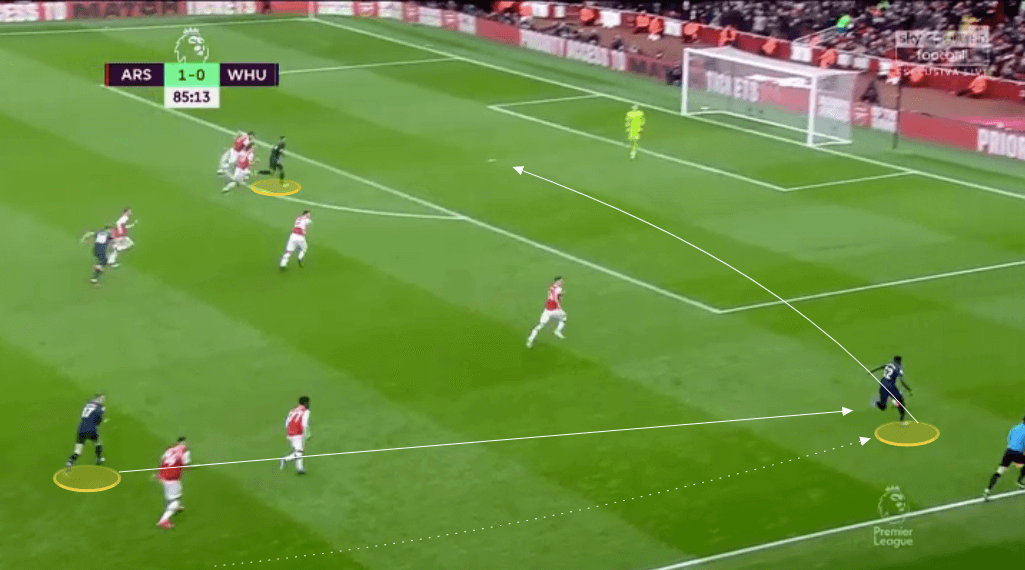 Again with the same data set, we can see that he actually puts in an above-average amount of crosses, however, his completion percentage is considerably lower than the average. His average accurate passes to the penalty area, represented by the size of the plot point, shows us that he isn’t finding ways to progress the ball into the opposite box outside of these cross attempts either, unlike Kyle Walker-Peters, for example, who ranks exactly below him for cross percentage in the graph. 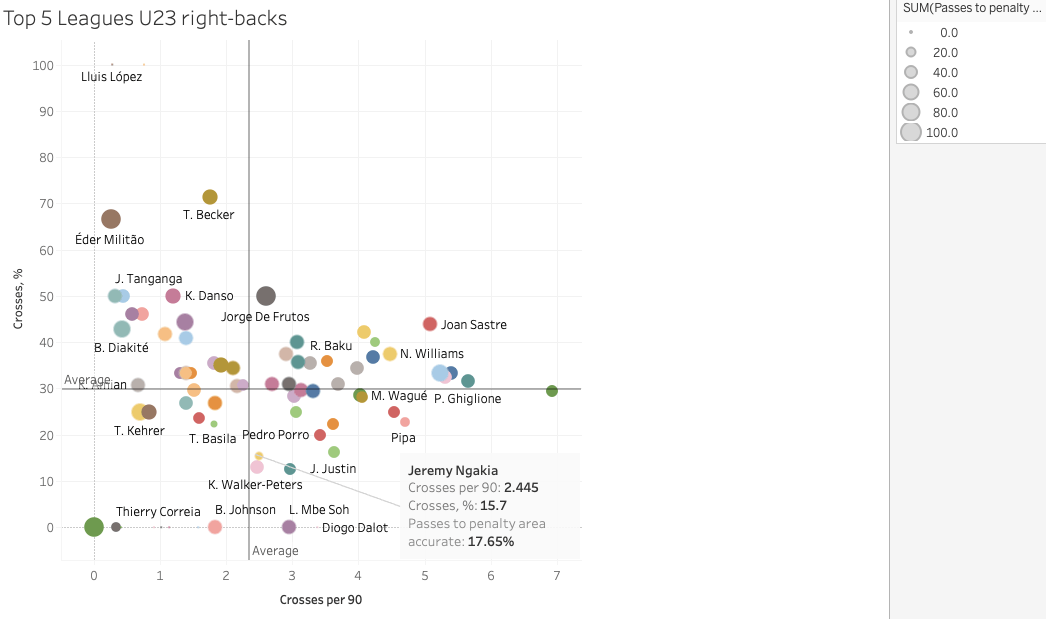 Ngakia has wonderfully quick feet and is excellent playing in tight spaces. He has great confidence in this aspect of his game and will take players on whether he’s inside his own defensive third or in the attacking third. He’s comfortable cutting inside onto his left foot or taking the ball around the outside of the defender. Due to his size, he has good strength to hold off a defender, but he has the pace anyway to beat them this way without having to fend off the player with his body.

One dribble move he has used at times is shaping to play the ball down the line, which he does do pretty consistently, before quickly shifting the ball onto his left foot and darting forwards inside. 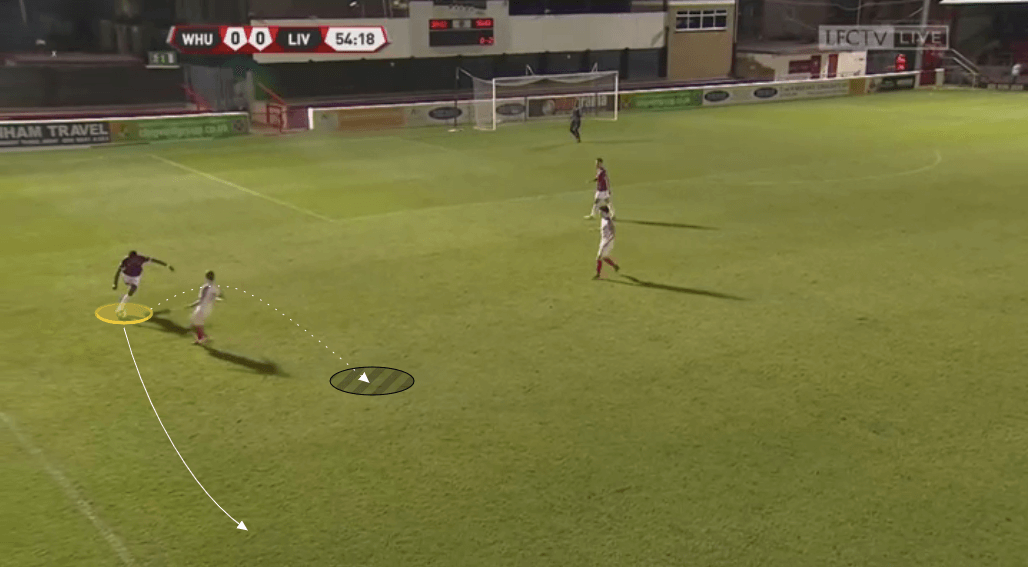 Ngakia has skill, pace, and power, which is naturally a perfect combination for being a good dribbler. He completed 60% of his 2.88 dribbles per game for West Ham this season, and this is an area he can be expected to continue to flourish in and only get better.

Finally, we can see that Ngakia ranks well amongst his under 23 peers across Europe when we look at his ability as an overall ball progressor with the ball when it comes to driving forward with the ball himself, rather than passing. He ranks above the average in this cohort for dribbles attempted per 90 and completion on these dribbles, whilst his 2.5 progressive runs per 90 is a more than respectable amount as well.

Admittedly in this graph we can see Youcef Atal, who plays at left wing as well as right-back, which would explain the high dribble attempts, and also hasn’t played a great deal, is an outlier here. Despite not playing much, he’s played more minutes than Ngakia has, so still features in this data set. 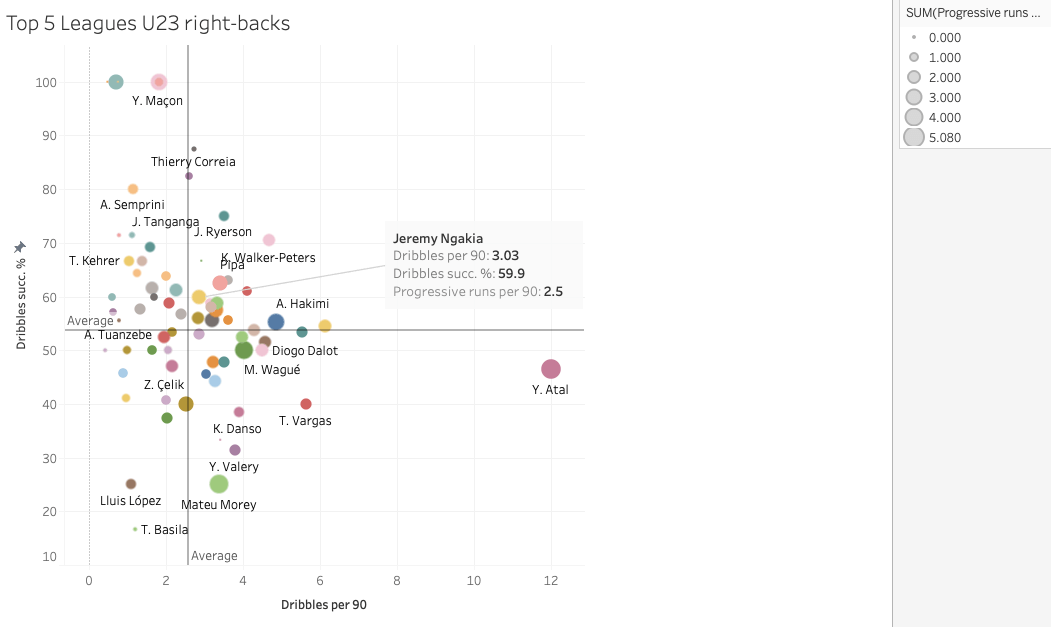 Ngakia is an exciting prospect, and if he can add a more consistent attacking threat with his passing and crossing, he is going to become a very complete right-back, and it’s likely his potential suitors are all too aware of this.

Right now he has shown he is a strong prospect as a more defensive-minded full-back and could potentially work well as a right-back for a team with a particularly attacking left-back, but seeing as his career is still in his infancy, it would make sense that a team looking for a back-up right-back with potential to break into the first team would be interested in getting his signature.