Barcelona ended their 2019/20 La Liga season with a five-goal thrashing of Deportivo Alaves. It was a hugely one-sided game and the Catalans needed that victory to finish the campaign on a high after Real Madrid had secured the crown in the previous fixture.

This tactical analysis will dissect both teams’ tactics and use analysis to tell you just how Barcelona managed to dismantle Alavés like that.

Both sides saw some rotation and changes in personnel. Juan Muñiz decided to deploy his troops in a 4-4-2 structure but would abandon that for a 4-5-1 system with the beginning of the second half. Roberto Jiménez was between the sticks with a back four that consisted of Adrián Marín, Lisandro Magallán, Víctor Laguardia and Martín Aguirregabiria. Of course, Rubén Duarte was suspended and Rodrigo Ely saw red in their previous clash with Real Betis.

Manu García started in midfield next to a familiar trio and Joselu and Lucas Pérez completed the duo up front. Muñiz didn’t wait too long for his substitutes but in the end, couldn’t do anything against the Catalans’ surging attack. 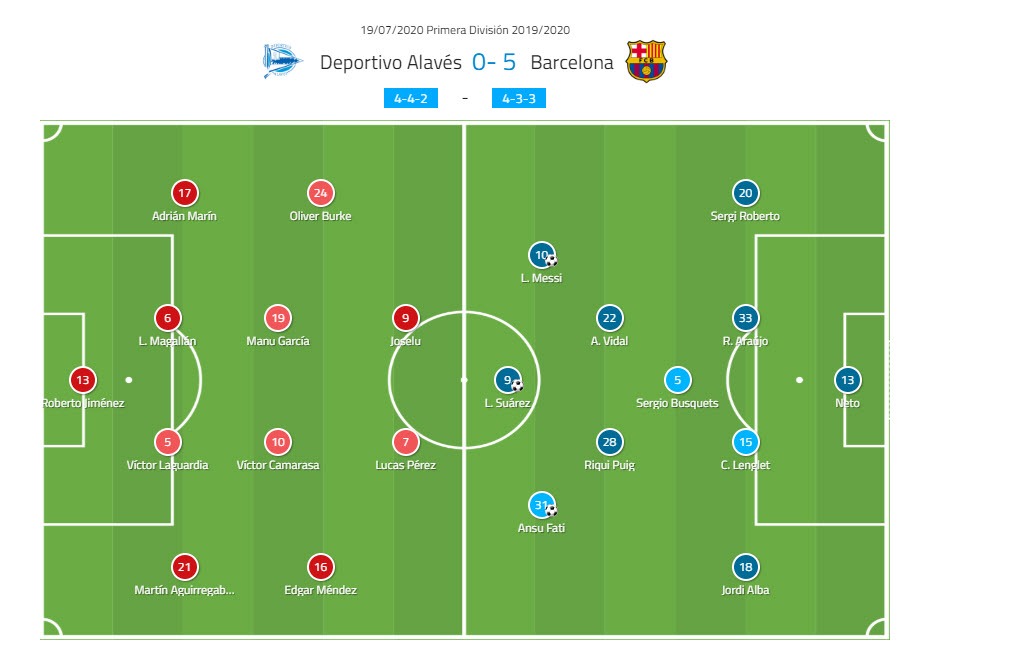 Barcelona and Quique Setién also made some changes but mostly due to injuries and suspensions. All three of Ivan Rakitić, Gerard Piqué and Junior Firpo were suspended and the likes of Antoine Griezmann, Samuel Umtiti and Ousmane Dembélé are still recovering from injuries. Neto also replaced Marc-André ter Stegen in goal while Ronald Araújo partnered Clément Lenglet in the backline.

Riqui Puig returned to the lineup and slotted next to the ever-present Sergio Busquets and Arturo Vidal in midfield while Lionel Messi, Ansu Fati and Luis Suárez were in attack. Barcelona were deployed in their traditional 4-3-3 formation.

It doesn’t take much more than a simple glance at the final scoreline to see that this was a clearly one-sided affair with Barcelona doing most of the attack and Alavés mostly defending unsuccessfully. But the key reason for that was the hosts’ interaction with the Catalans’ build-up system.

Barcelona would shift their 4-3-3 formation into a 3-4-3 or even a 3-3-4 when attacking and their movement and manipulation of the opposition’s movement were great. Busquets would drop between the centre-backs and a back three would have no problem bypassing Alavés’ two-man frontline who were tasked with applying pressure.

The core idea was rather simple too – recycle the possession in the backline until Alavés are forced to engage their second line of press, meaning that one player would have to vacate his spot to put pressure on the ball-carrier, leaving space behind his back in the process. 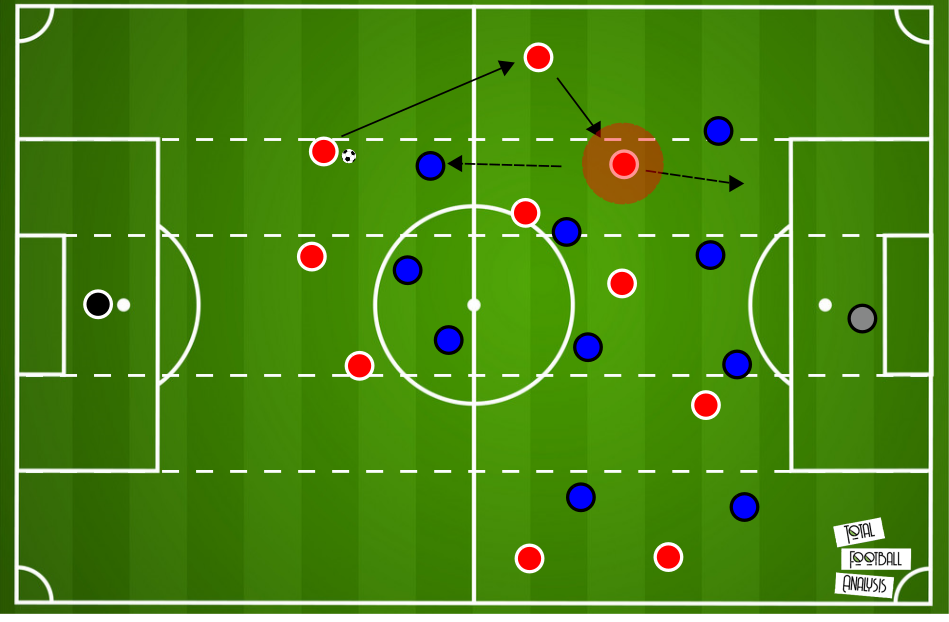 You can see a general structure of Barcelona’s tactics in the graph above. The ball is with the left centre-back and since the front two of Alavés can’t cover that much ground, a midfielder has to step up to combat the numerical inferiority. This, however, means that Fati is now free in the half-space and a simple switch out wide to Jordi Alba and then back inside towards the young forward kick-starts Barcelona’s attack.

Let’s see an in-game example down below. Busquets has dropped in-between the centre-backs, establishing a 3v2 scenario in the first third. The ball is recycled from right to left, meaning Joselu and Pérez can’t cover them alone, prompting a midfielder to step up. That, however, gives Barcelona the necessary space to access both Alba and then Fati. 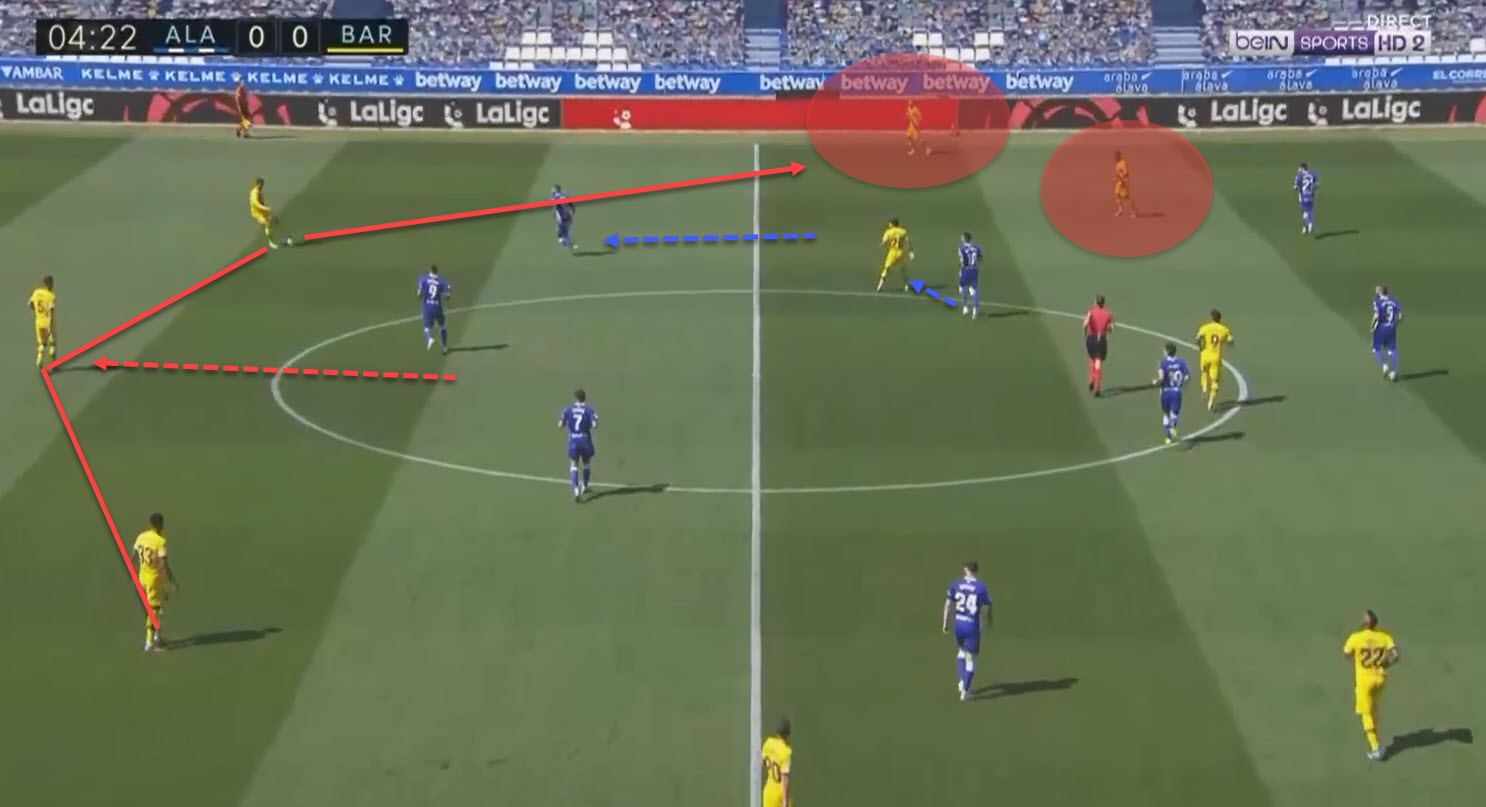 Alavés had the right idea and their original 4-4-2 setup was predominantly used to block the half-spaces and prevent Barcelona to get the ball to Messi and Fati, both of whom would operate in their respective half-spaces, two of the Catalans’ most dangerous pieces of the jigsaw.

We can actually see that in their narrow formation that would allow the ball to reach the full-backs, which they mostly seemed happy to let happen, but, as we will see further down the line of this tactical analysis, there were holes in their defensive system Barcelona happily exploited.

One of the ways they did that was also through movement manipulation. Alavés’ defensive system was mostly zonal but the midfielders would have designated markers and if those deviated from their position, they would be closely followed. Barcelona knew this and constantly opened spaces by dragging them out of position. Notice such an example below. 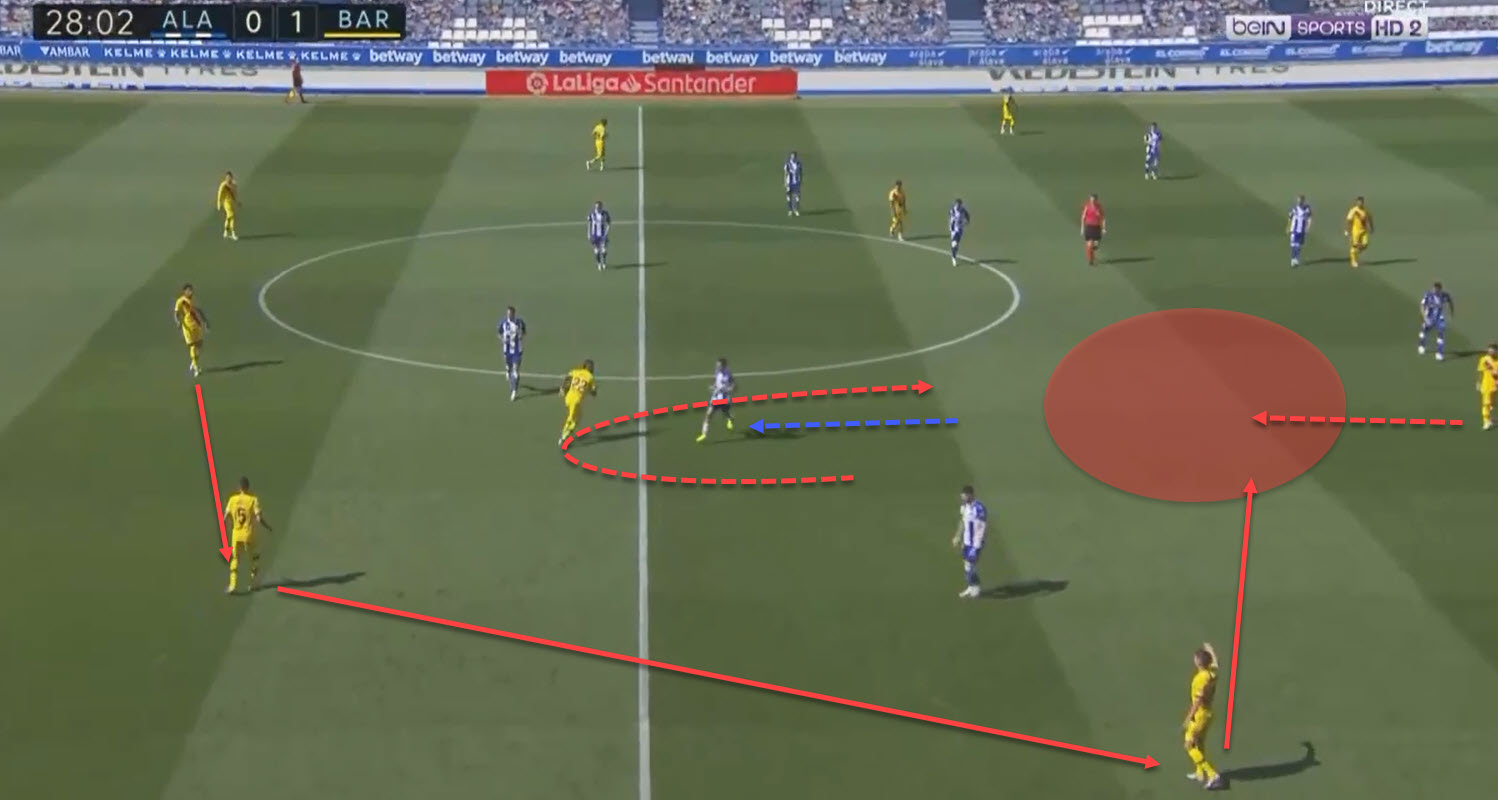 Vidal drops deeper towards his backline and that drags his marker as well, opening space behind his back. The ball is then quickly sent towards the flank and then back inside to find Messi in his half-space. Vidal also makes a curving run to return to his original position, only this time, it’s the Chilean and Messi who can outnumber the defenders in that area.

Barcelona had no issue using their full-backs to occasionally underlap as well as soon as Alavés’ second line of defence was engaged in the press. Below, we can see Roberto making use of that pressing trap and a simple passing sequence that starts wide and ends centrally can exploit the hosts’ structure. 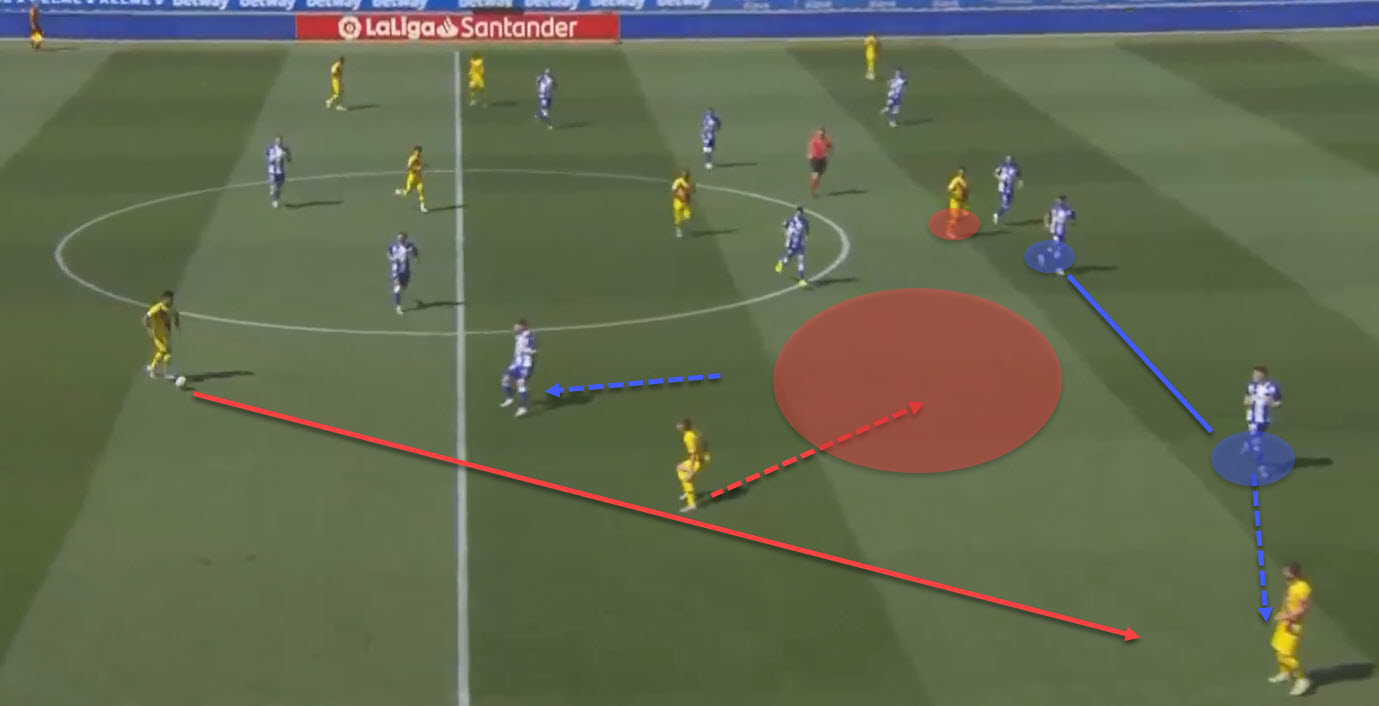 Apart from failing to recognise how to stop Barcelona from easily advancing into the final third against their narrow 4-4-2 system, Alavés also struggled with one crucial aspect: compactness.

Whether it was vertical or horizontal spacing, the hosts could simply not remain compact enough which gave Barcelona the necessary room to outmanoeuvre them and ultimately pierce right through their lacking structure. That posed a serious problem throughout the game and players like Puig, Messi, Busquets and De Jong – all of whom can find players between the lines – were using that efficiently.

Of course, it has to be said that Barcelona were moving the ball with speed and precision, making it really difficult for Alavés to get back into their mid-block without leaving gaps between their lines. So swapping sides, either through a lofted long ball or via a line-breaking through ball was often used by the away side.

Notice below how the Catalans quickly advance up the pitch by first manipulating the hosts’ movement, as we’ve seen in the first part of this tactical analysis, and then find vertical gaps between the right-back and the right midfielder to send Fati forward through the half-space. 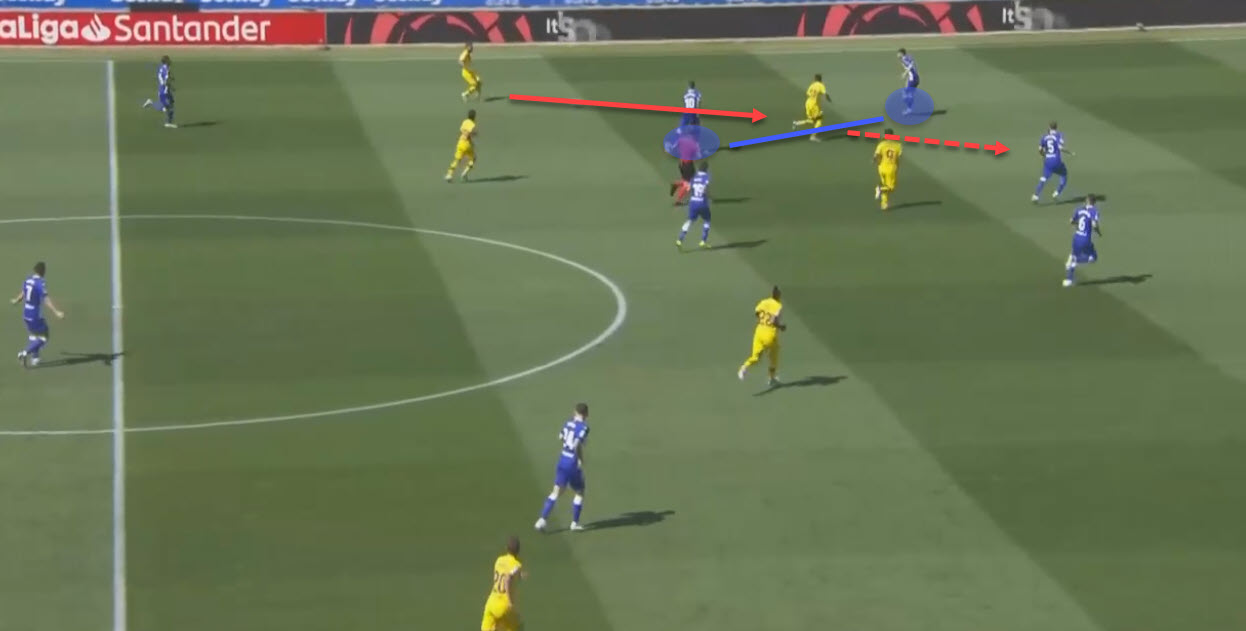 And they just couldn’t cope with the speed and the precision of their opponents’ passing. Below, we can see how Suárez drops deeper and can easily be found from the wider areas. After that, the ball is sent back to Busquets and then quickly to the other side, forcing Alavés to shift once again. 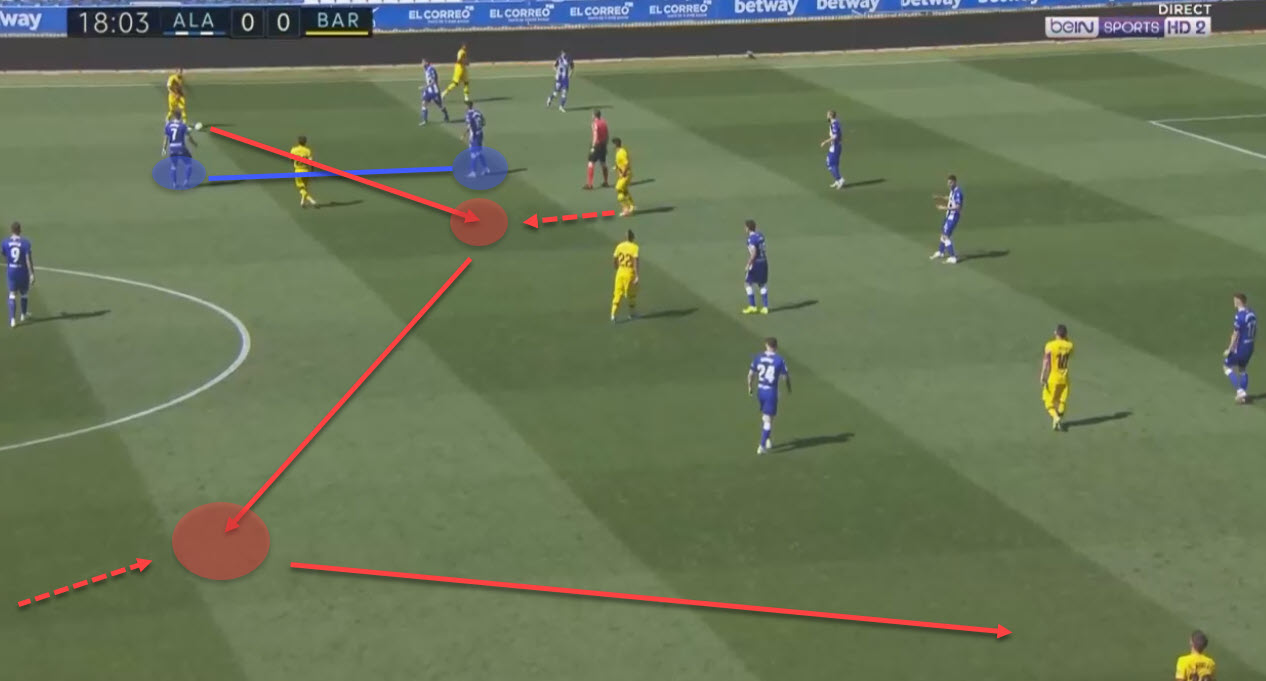 Barcelona would use that to find their key players like Messi in pockets of space and just on the edge of the box where he could either shoot directly or send passes behind the opposition’s backline. But unfortunately for Alavés, they experienced the same thing in the second half as well and despite Muñiz’s best attempt to fix the problem.

Alavés shifted to a 4-5-1 formation in the second half, putting more bodies into midfield as they tried to overcrowd the area and limit Barcelona’s movement. However, even in those cases, the Catalans were able to exploit the lack of compactness whenever the sides were rapidly swapped.

Notice below how exactly that happened as Barcelona recycle possession from left to right and Alavés’ midfielders lose their markers in that transition, allowing for pockets to appear, which the Catalans promptly made use of. 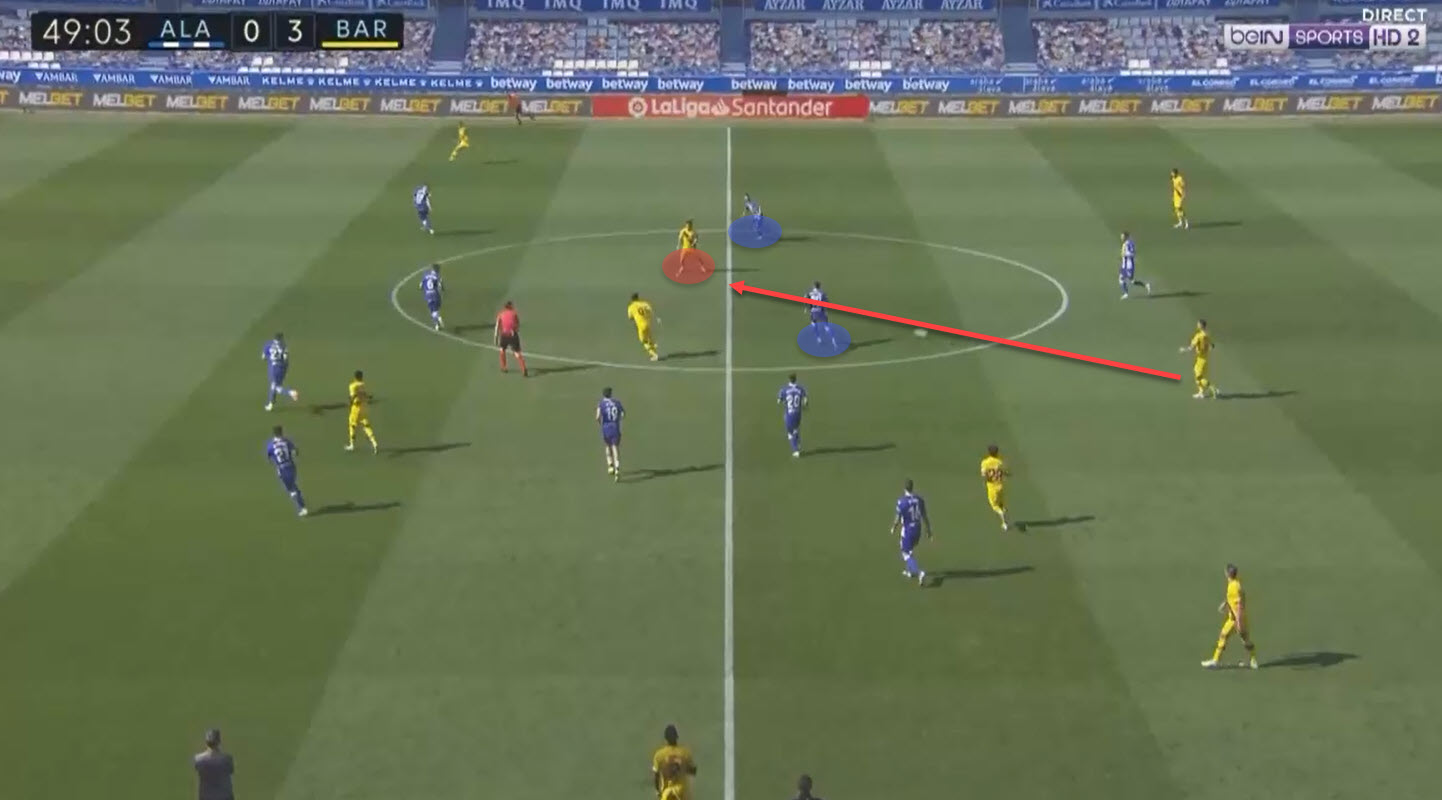 A similar thing occurred when they attempted to press higher up the pitch. Their initial 4-4-2 would first transform into a 4-3-3 when the ball was shifted wide or forced backwards. This would usually be the trigger for them to put more men forward.

However, even though transitions seemed to be a good weapon for them, as we’ll see in the final part of this tactical analysis, the press was often ineffective as well and gaps were constantly used by Barcelona. Such an example can be seen down below. 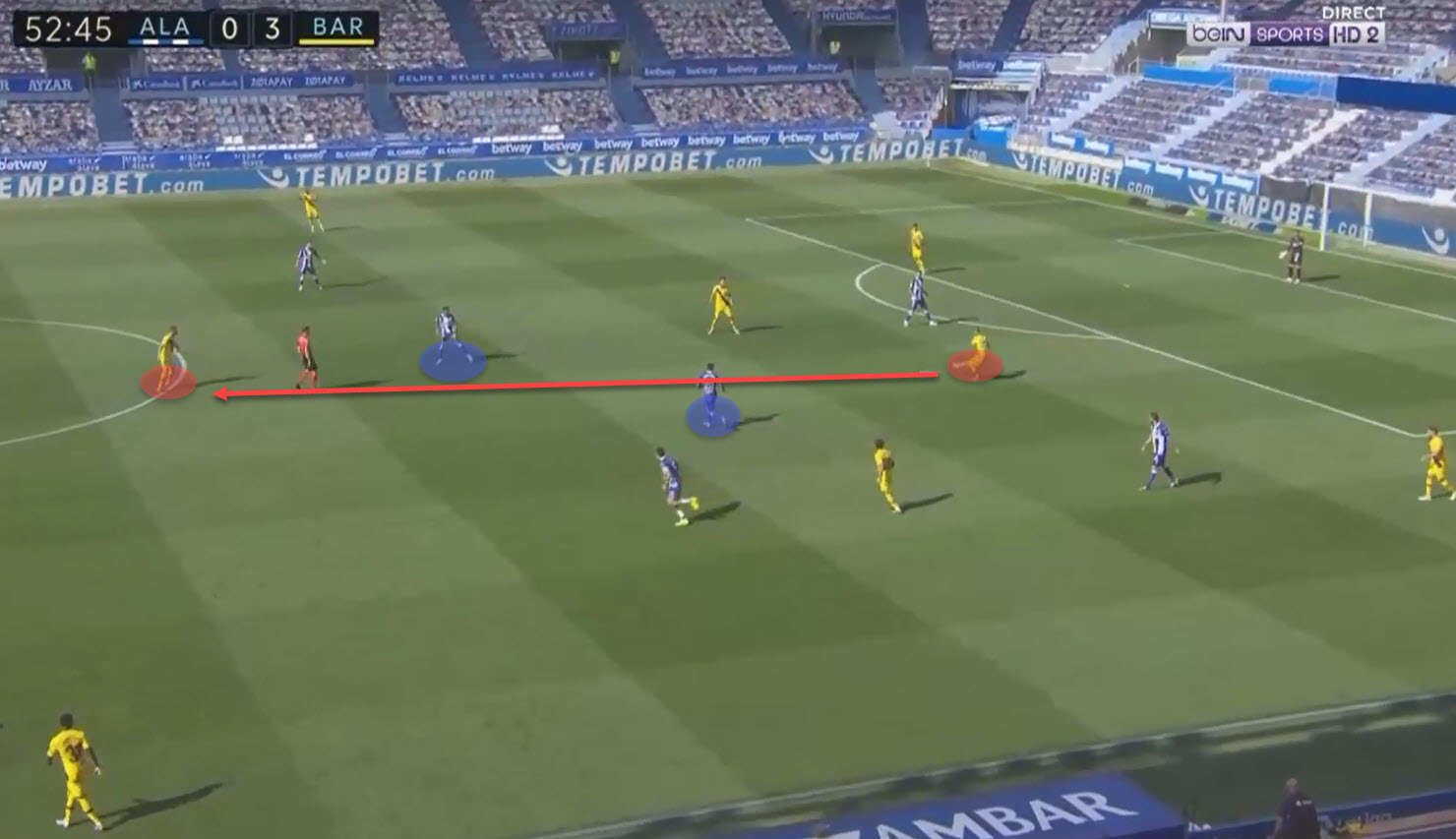 Finally, we will observe Barcelona’s pressing structure and Alavés’ response through counter-attacks. The Catalans’ default defensive system is a flat 4-4-2 in most cases and this clash was no different. Whenever they were not pressing high up the pitch, they would revert to this structure and sit in a mid-block.

However, when advancing further up in those rare cases when Alavés were given a chance to build their attacks from the back, Barcelona were using man-marking tactics to effectively mimic the opposition’s shape. You can see an attempt to shut down all possible passing options using this tactic down below. 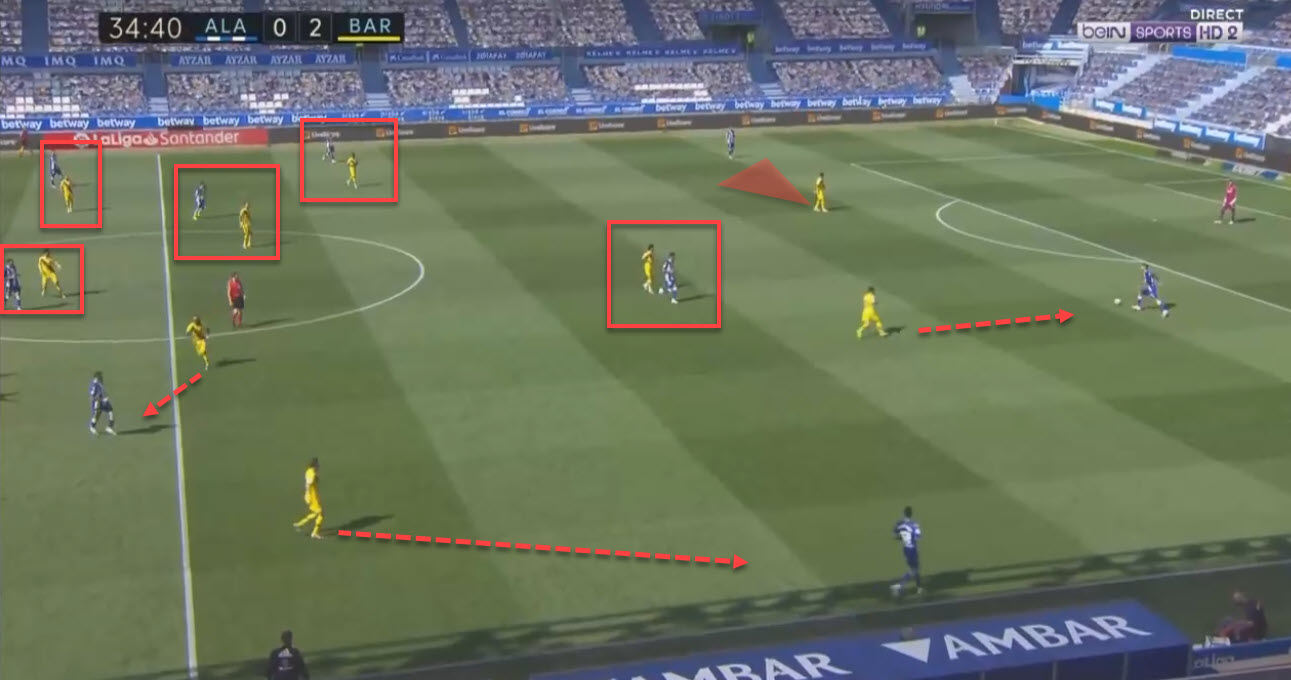 Notice how every Alavés player has a designated marker and if deployed successfully, this forces the team in possession to go long or try a far more riskier approach through the middle and by breaking multiple lines.

Whenever Barcelona would lose possession, they tried getting it back as soon as possible and even though this was mostly effective throughout the game, it was quite obvious that only specific players were tasked on continuously hunting for the ball: Vidal, Busquets, Puig and later on, Frenkie de Jong.

And while it’s usually the player closest to the ball that has to apply immediate pressure, these four players were more often than not the first, and sometimes the only, players rushing to do that task. Here’s an in-game example of that below as Barcelona lose possession in the final third and Alavés use this to start a transition.

Notice Busquets, Puig and Vidal rushing back and since Roberto is also caught high up the pitch, Alavés have a clear path towards the opposition’s goal. It has to be said that the close proximity of their players, as well as good movement, is also what made the counter so good but they were also able to exploit Barcelona’s tactics here.

Additionally, sometimes this meant that a player from the deep had to cover too much ground to put pressure on the Alavés ball-carriers, often giving them enough time to control the ball and deploy the desired pass without obstruction.

Take a look at such an example below as it’s once again Vidal who has to apply pressure but since Barcelona are too disjointed in their press, the Chilean can’t get there in time and Alavés send a long ball over the top and into space for their forward, ultimately ending in one of their best chances of the game. 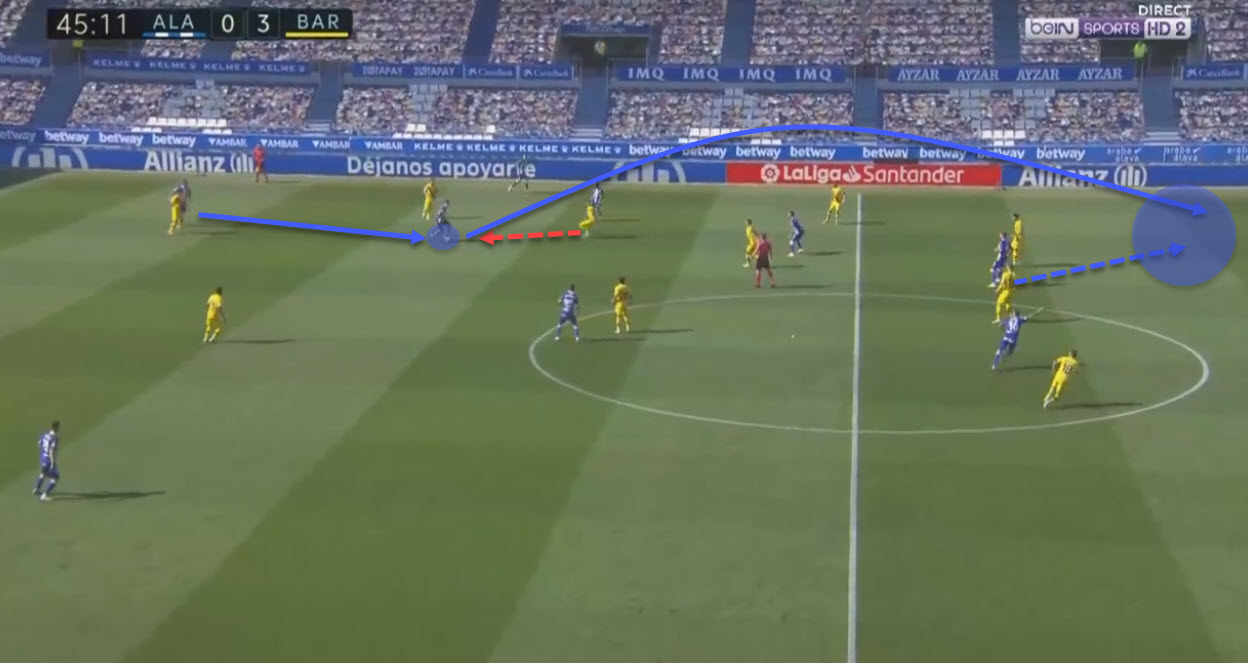 The Catalans’ intensity dropped in the second half, unsurprisingly, because they were enjoying an insurmountable lead over their opponents, and also since Vidal was now playing as a centre-back after Lenglet’s injury, and for the rest of the clash, they were happy to sit in a 4-4-2 formation.

Unfortunately for the neutral supporters and Alavés, the game as a contest was all wrapped up before the end of the first half.

Even though it won’t mean much in the grand scheme of things, Barcelona managed to end their season with a comfortable win that can surely boost their spirits amidst the return of the Champions League in August.

Alavés also didn’t have anything but their pride to play for and maybe it was the scorching Spanish sun in the afternoon or just the lack of true motivation, but they couldn’t really pose a challenge to the Catalans at all.