Having won their opening fixture of the Premier League season quite comfortably against Tottenham, Everton came into this week’s game against West Bromwich Albion in a lot of confidence. The acquisitions of Allan, Abdoulaye Doucouré and James Rodríguez have served to completely change the mood around Goodison Park, with the Toffees looking hopefully towards a finish in the higher reaches of the table this season on the back of those signings. West Brom, on the other hand, haven’t made too many additions to their squad, although they did manage to bring back Grady Diangana on a permanent transfer from West Ham United, after his successful loan spell with the Baggies last season. They also converted Matheus Pereira’s loan deal into a permanent transfer, and have signed Callum Robinson from Sheffield United, with Oliver Burke going the other way. However, there are still large parts of the squad which look distinctly like Championship-quality, and Slaven Bilić may need to add some more quality to his squad if West Brom are to avoid getting sucked into a relegation battle.

This tactical analysis will look at the tactics of both sides, especially before Keiran Gibbs’ sending off which completely changed the match and allowed Everton to come away with a comfortable victory at the end. 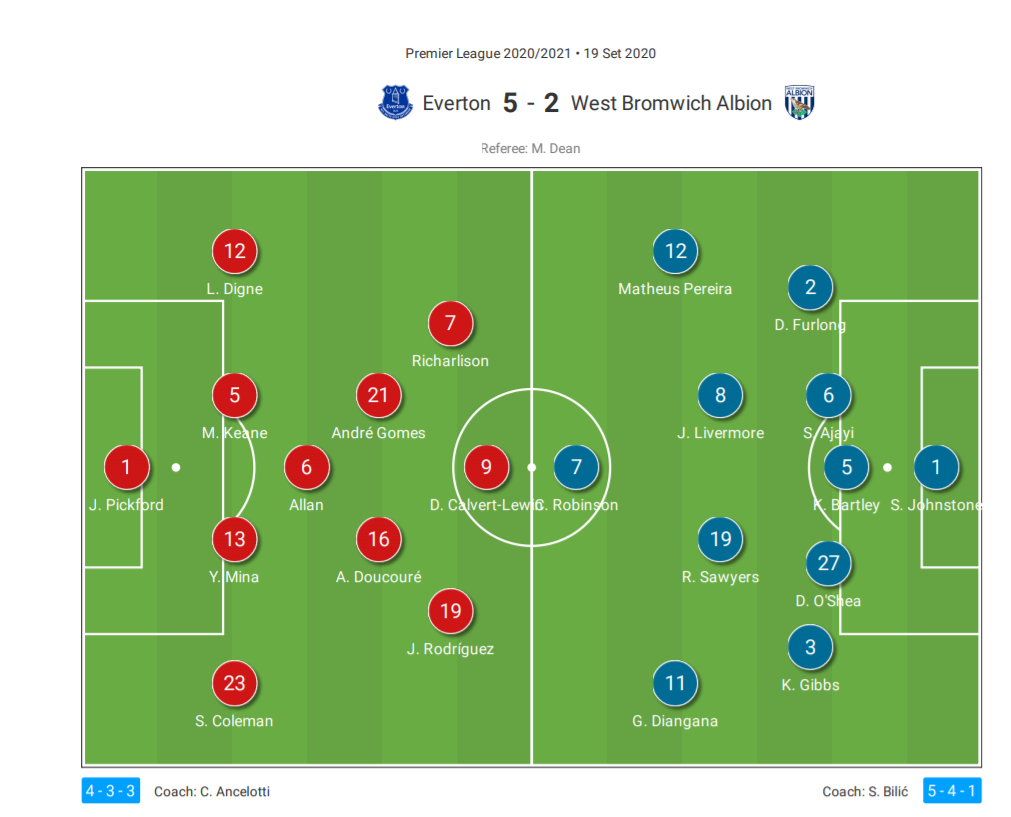 Carlo Ancelotti put out the same XI as the one that defeated Tottenham on the opening day, so Michael Keane partnered Yerry Mina at the back, Allan, Doucouré and André Gomes formed the midfield trio, and Richarlison, Rodríguez and Dominic Calvert-Lewin lined up in attack.

Slaven Bilić too named an unchanged side from the one which lost to Leicester City. It was a back five, with Kyle Bartley, Semi Ajayi and Dara O’Shea as the centre-backs, flanked by Gibbs and Darnell Furlong. Jake Livermore captained the side from midfield, alongside Romaine Sawyers, with Diangana and Pereira on the flanks, and Robinson leading the line.

The away side actually began the game well, testing Jordan Pickford within the first minute, and generally making it difficult for Everton. Bilić’s setup meant that the Baggies were in a 5-4-1 shape, where they were congesting midfield and not allowing the Toffees to be able to pass easily through central areas. At the same time, they were also pressing high up the pitch, especially in the opening stages of the game. This can be seen from the PPDA chart for this match – 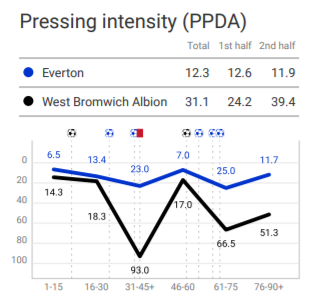 While West Brom never pressed as high or as aggressively as Everton did during this match, the period with their highest pressure was during the first 15 minutes of the game. During this time, the four West Brom attackers would push on to cover all of the Everton defenders, not giving Jordan Pickford a short passing option and forcing him to go long, where they would then be able to win the ball back and attack rapidly and directly.

If Everton managed to play out of the press, the Baggies would quickly fall back into a tight defensive block, with the aim being to deny Everton any central space to pass or make runs into. West Brom were quite happy for the Everton full-backs, Coleman and Digne, to receive the ball on the run out wide, after which the wing-backs would move out to engage them. However, they were working extremely hard to ensure that Gomes, Allan, Doucouré and especially Rodríguez did not receive the ball in the half-spaces centrally, and if they did do so, that there was a West Brom player in close proximity to put pressure on them immediately.

The likes of Diangana and Pereira were also working hard to shut down passing lanes and ensure that Everton could not get their most creative and dangerous players on the ball easily.

This work-rate and discipline ensured that the home side were unable to make too many inroads during most of the first half, and it also contributed to West Brom’s opening goal, as we will see later.

Much has been made of the fact that Ancelotti was allowed to essentially go and buy a whole new midfield for Everton this summer. Allan, Doucouré and Rodríguez are all high-class additions who will raise the quality of Everton’s football by several notches. However, they still need time to gel and understand each other’s roles and positions, and that uncertainty is something that opposition sides can take advantage of in the opening weeks of the season.

Ancelotti has used a 4-3-3 in both league matches this season, where Gomes, Allan and Doucouré formed the midfield three, with Rodríguez out on the right flank. Thus, Allan has been used as the deepest midfielder, tasked with protecting the central spaces in front of the defence. While the Brazilian is capable of doing so, he has been left isolated at times, while he also has a tendency to get attracted to the ball and rush out of position, leaving space in behind for teams to exploit if he does not win the ball back. This was seen in the build-up to West Brom’s opening goal in this match.

This uncertainty around their positioning was seen on multiple occasions throughout the first half in particular, which hindered Everton during their build-up play as well. James’ tendency will always be to come into central areas from his nominal right-sided position, and while that did allow him to influence the match greatly, as we will see later, it also caused issues at times, where the Everton midfield was too crowded and close to each other, with the result that players were not occupying areas where space was available.

Another issue was with the use of Allan as the single pivot, as we have mentioned already. While this led to space being conceded when he pushed up to try and win back possession, at the same time, it also caused problems a few times during Everton’s build-up. The decision-making was often poor, with Gomes and Doucouré not choosing the correct moments to drop in or push on, which meant that Allan was isolated and could easily be marked by West Brom. This meant that Mina and Keane had to play the ball out wide rather than into central areas, which hindered Everton’s buildup.

This is not to say that Everton were poor while building up throughout the game – the above image shows how Doucouré, in particular, would try and create space for teammates by dragging his markers into wider areas with him. However, the fact remains that it may be potentially too much for Allan to have to protect the central areas himself, and there may be a case for Ancelotti to try a 4-2-3-1 shape, with Allan and Doucouré as the double pivot. Doing so would give the Everton backline more freedom, while also giving them one more player in deeper areas when building up from the back.

The arrival of a bonafide global superstar such as Rodríguez at Goodison Park has definitely excited the Everton faithful, and his displays from these first two games show that he is not the fading force that many thought him to be. The Colombian has always been at his best when operating in the central half-spaces like a playmaker, both for his national side as well as for Real Madrid and Bayern Munich, and he looked to get into those sort of areas as frequently as possible. A look at Everton’s average positions for this match can help show just how keen he was to move centrally – 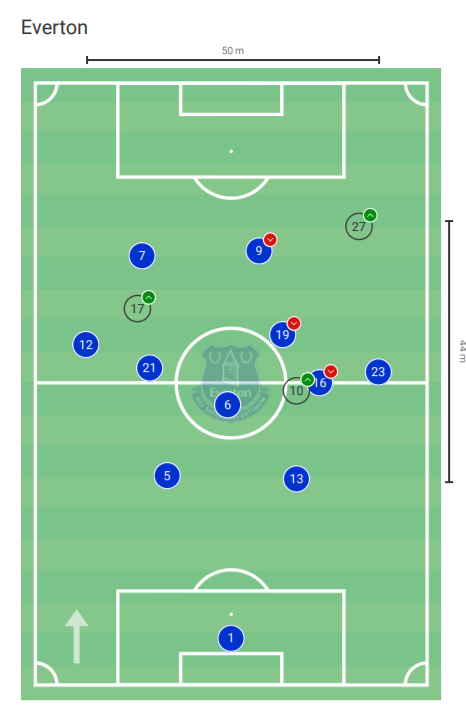 Note how James (#19) is central, even more so than Doucouré. He also came quite deep to pick up the ball, and this positioning meant that Coleman had a lot of space to move into on the overlap. However, the Colombian’s favoured link-ups were with Digne and Richarlison on the left – this had been seen in the opening game against Spurs as well, where he would drop in, pick up the ball and sweep a pass out to the left with his left foot for either of those two players to run onto.

Of course, the Colombian is also renowned as a scorer of great goals, having won the FIFA Puskás Award in 2014 for his spectacular volley at the World Cup against Uruguay, and he scored a very good goal in this game as well. As is usual with Rodríguez, the goal came from a central position outside the box, where he was found in space by Richarlison.

While Gibbs’ red card just before half-time made it a lot easier for Everton in the second half, Rodríguez did take full advantage of all the space that he began to find as a result. He got the assist for Calvert-Lewin’s hat-trick goal, having taken the corner, but it was from open play that his influence was truly outstanding, as he began to play inch-perfect passes over the West Brom defence.

These two instances show how the Colombian can be relied on to unpick deep defences, and Everton fans could see a lot more of these combinations in the league this season.

The red card robbed this game of its competitiveness, even though Matheus Pereira had equalised early in the second half for West Brom with a brilliant free-kick. The Baggies’ organization and discipline had managed to frustrate Everton for the majority of the first half, and Slaven Bilić will be happy with that aspect of this performance. Equally, Everton were able to run riot in the second half, with Rodríguez being one of the key instigators behind that. While there are few kinks in midfield for Ancelotti to iron out, the form that his Colombian playmaker has been showing so far bodes extremely well for Everton fans this season, and it will be fascinating to see if they can keep up this run in the next few games.