In light of Brentford’s remarkable run of form since the restart, this match between West Bromwich Albion and Derby County had increased meaning. Both sides still have very valid hopes of promotion to the elusive Premier League. However, these respective sides are under varying pressures and expectations.

The Rams’ form has been excellent – collecting ten out of the maximum 12, coming off the back of an extremely late equaliser versus local rivals Nottingham Forest. Since Manchester United legend Wayne Rooney’s arrival at the beginning of 2020, Phillip Cocu’s team have been one of the stand-outs. West Brom and Slaven Bilić still hold the cards in their destiny but they have shown signs of weakness. They’ve drawn 0:0 at home to Birmingham, in addition to losing away at Griffin Park. A result in this game would be hugely significant.

This tactical analysis will conduct analysis to look at the tactics of West Brom and Derby in this EFL Championship game. 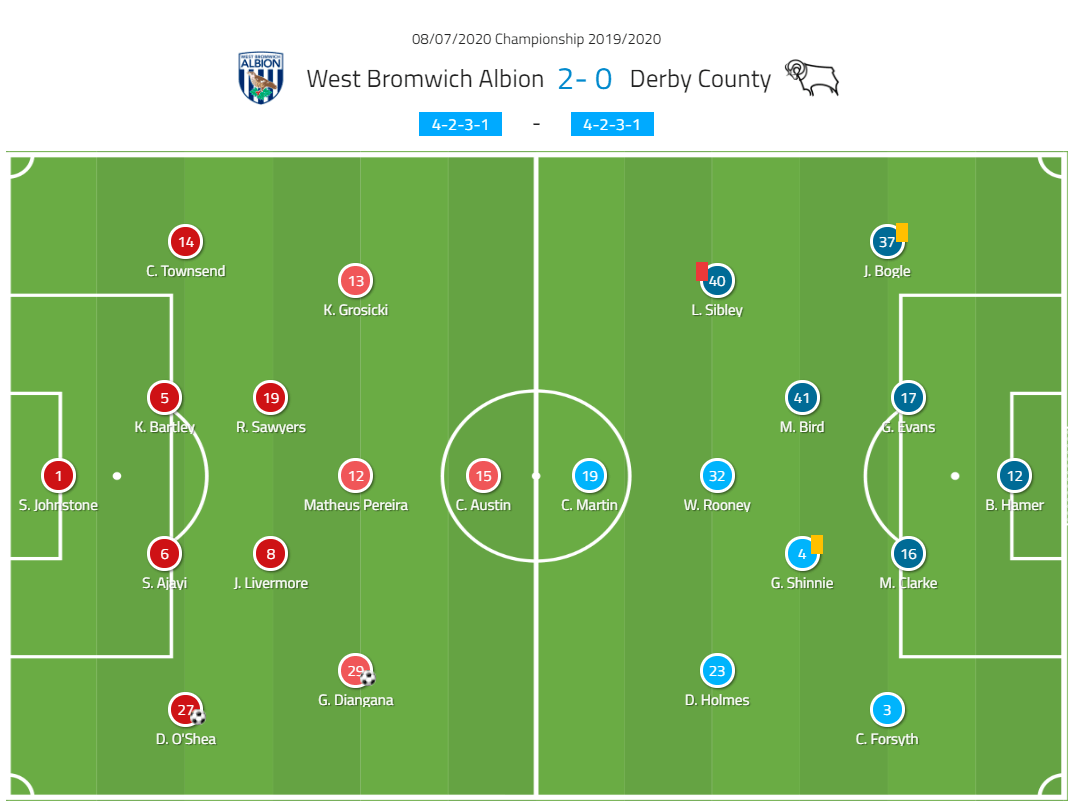 Bilić made four changes from the side that beat Hull City, with the Baggies lining up in a 4-2-3-1. Egyptian centre-back Ahmed Hegazi was sent off late on for two yellow cards, and Kieran Gibbs came off injured in the first half. Their respective replacements were: Semi Ajayi and Conor Townsend. Matheus Pereira registered a hat-trick of assists against Hull, taking his total to 15 for the season.

Cocu made one optional change to his starting 11. Graeme Shinnie was picked instead of Jason Knight, who dropped to the bench. Rooney played as the ‘10’.

In such a clash whereby both teams seek to establish possessional control, you’d probably the home side to have greater dominance and control. However, it was Derby who had 60% possession. In fact, they had eight possessions lasting 45 seconds or more. Nonetheless, their overall downfall was their inability to create high-quality chances – they didn’t have a single shot on target, despite some changes that were made in their build-up structure by Cocu throughout the game.

Through the use of rotations, Derby hoped to be dismark themselves, or create overloads, especially against West Brom’s double pivot. Indeed, the more offensive players in Derby’s 11 all have tendencies to play more centrally. Therefore, they had the modern idea of allowing their full-backs to advance to be width providers, although this naturally sacrificed defensive coverage that West Brom often capitalised on. 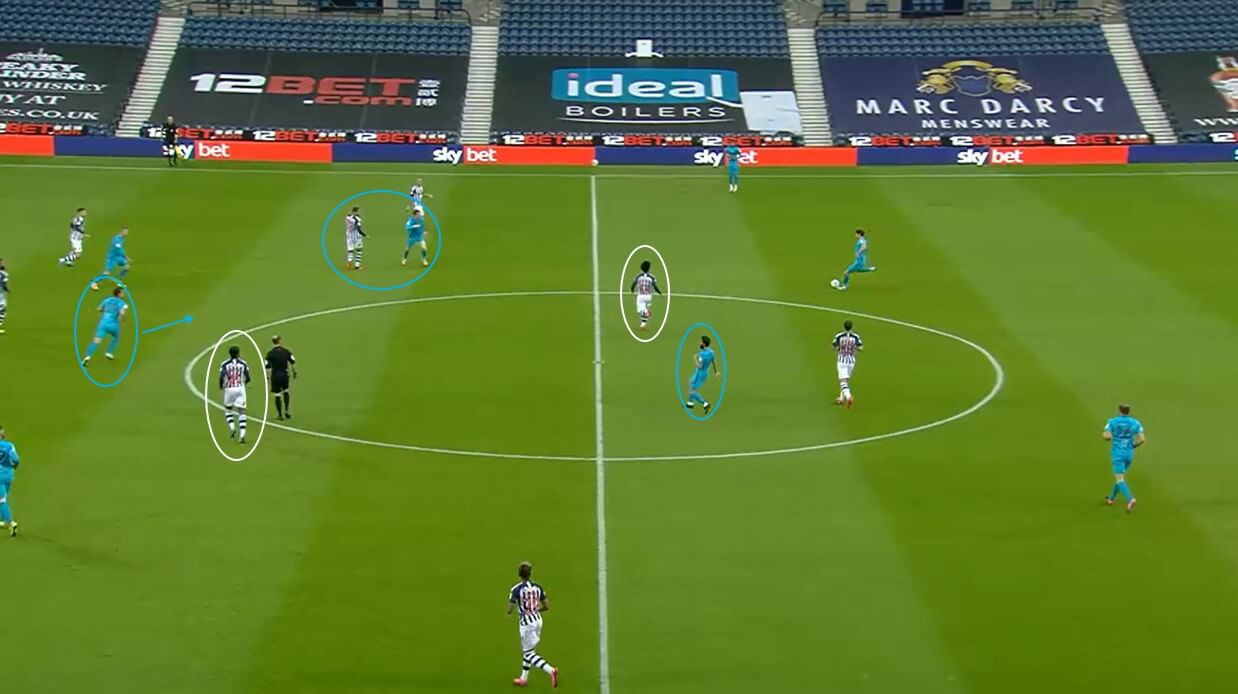 In the first 45 Shinnie acted as the main constructor from deep. Max Bird, who began alongside the Scot, was more inclined to take up attacking positions, such as between the lines, thus leaving a 4-1-4-1. We can see a good example of this above. Bird is occupying Jake Livermore, while Romaine Sawyers is still shifting across. Pereira also hasn’t got across as quickly as you’d like, this means that a passing lane has opened up through the centre. Interestingly, Chris Martin made movements like that of a false nine at times – also evident here – perhaps hoping to give Louie Sibley space to exploit.

The purpose of these movements was to pin the West Brom double pivot, therefore making central ball progression an easier task. In theory, they couldn’t go higher in fear of freeing Rooney et al, but by staying deep they would allow Shinnie to receive with negligible pressure. 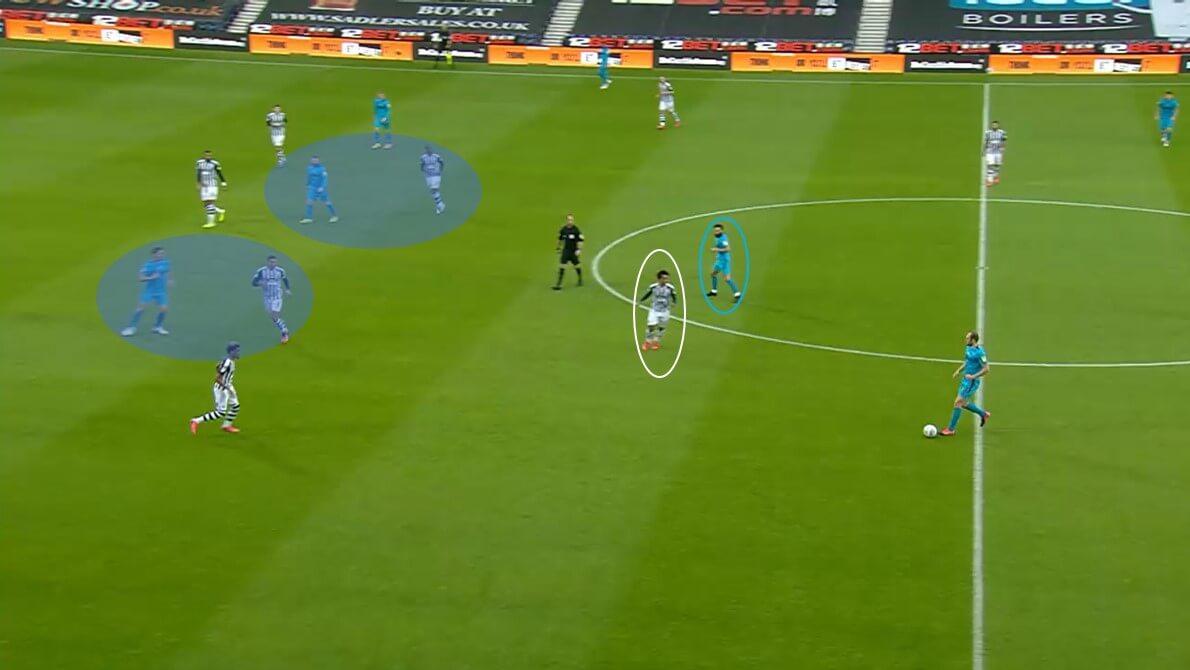 You can effectively see this here above. Martin has come slightly deeper, positioning himself on Livermore’s blindside, with Rooney on the same horizontal line, near Sawyers. Left-centre-back Matt Clarke is given time to push up, engaging Pereira. This could allow Shinnie to receive and bypass West Brom’s line, with no immediate pressure to be then applied. But, instead of adjusting his position and body orientation in respect of Pereira’s, the ball is guided out wide and a turnover occurs. 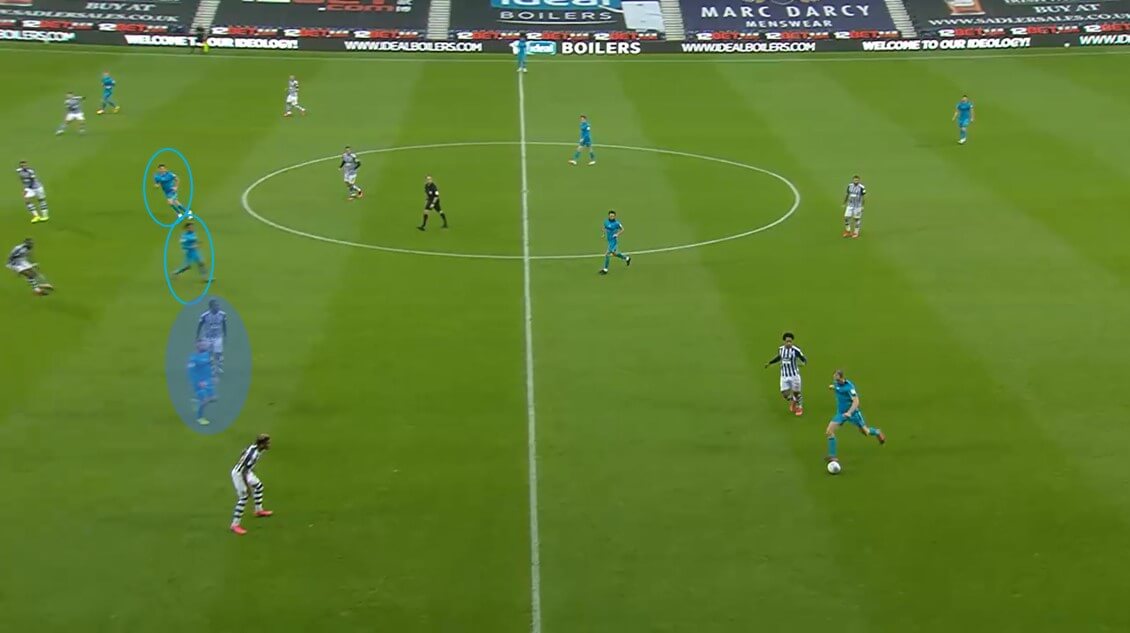 This instance shows something somewhat similar. In this instance, Pereira has ensured Shinnie is in his cover shadow while forcing Clarke wider. Rooney occupies Sawyers, letting left-winger Duane Holmes rotate inside. Martin also has space in front to receive possession. Clarke, though, plays a pass over the defence, which doesn’t materialise into anything. 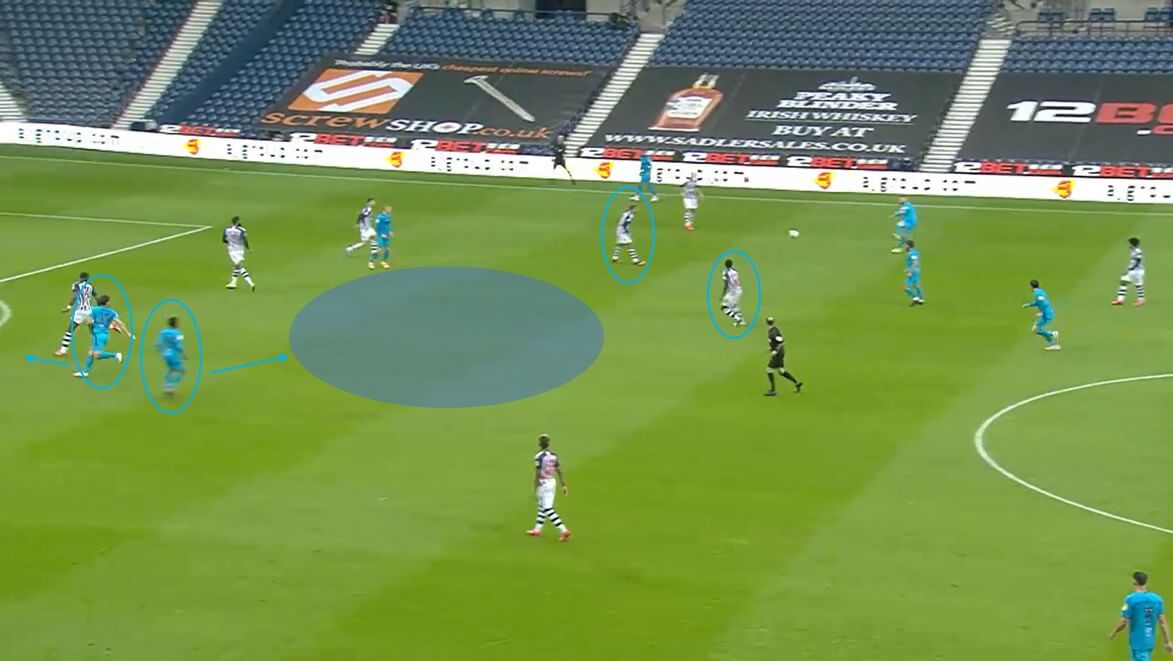 In this example, there is better execution. Holmes has come inside into space that Martin has vacated by providing depth, as well as bringing his marker with him. Both pivots have been drawn to the ball-side by being attracted to Derby midfielders. This, combined with Martin’s movement, has meant a large amount of space has arisen between the lines. Unfortunately, the pass from Rooney is just behind Holmes which allows the West Brom defenders to get back in shape. 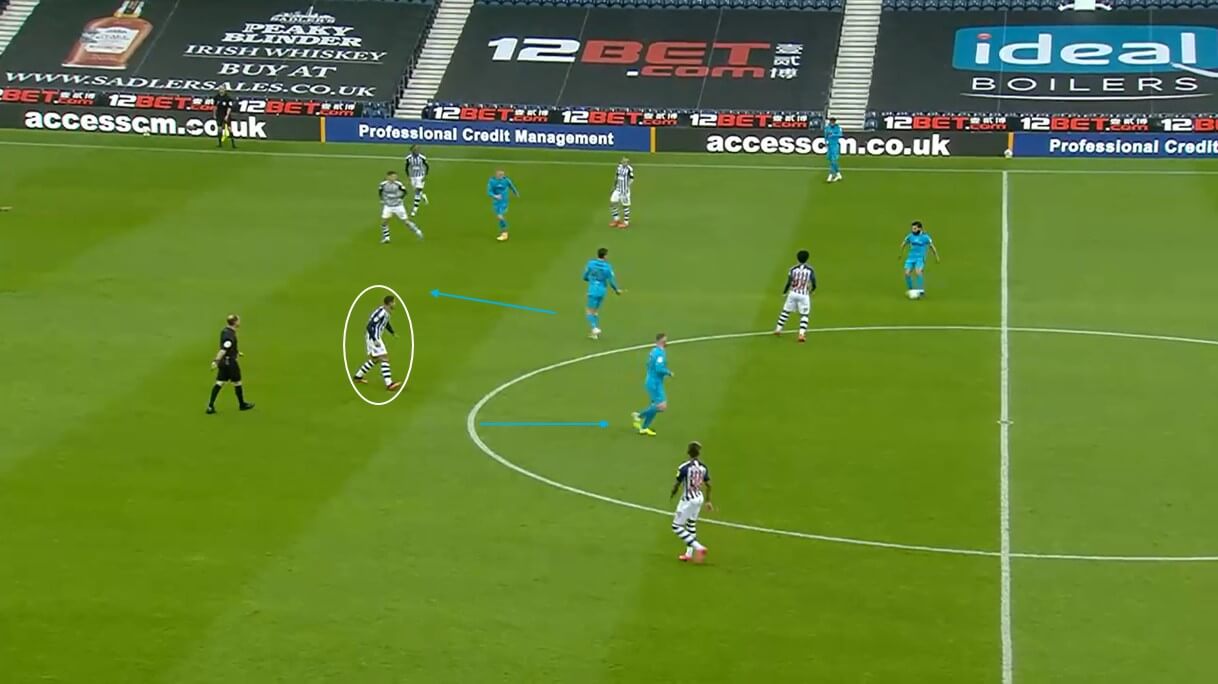 This final example shows how a minor rotation can be effective in ball progression. Rooney, playing as a ‘10’, rotates with central-midfielder Bird, subsequently overloading Livermore. With Livermore’s attention occupied Bird can receive in a good area, with positive body orientation, under no pressure, and look to play forward. Derby had good ideas in their build-up but lacked penetration and suffered from poor execution.

Bilić opted for a standard 4-4-2 structure out of possession, lining up in a mid-block. A pressing trigger was the ball being played to the full-back, whereby the winger could jump up and form a situational 4-3-3. Of course, to remain vertically compact the full-back needs to follow. Grady Diangana and Kamil Grosicki were therefore positioned in the half-space preventing access but also in an optimum area to be able to pressurise their respective full-back. Because the Derby centre-backs could be pressed directly by Pereira and Charlie Austin, and Shinnie didn’t drop in, the ball would naturally levitate to the full-backs. 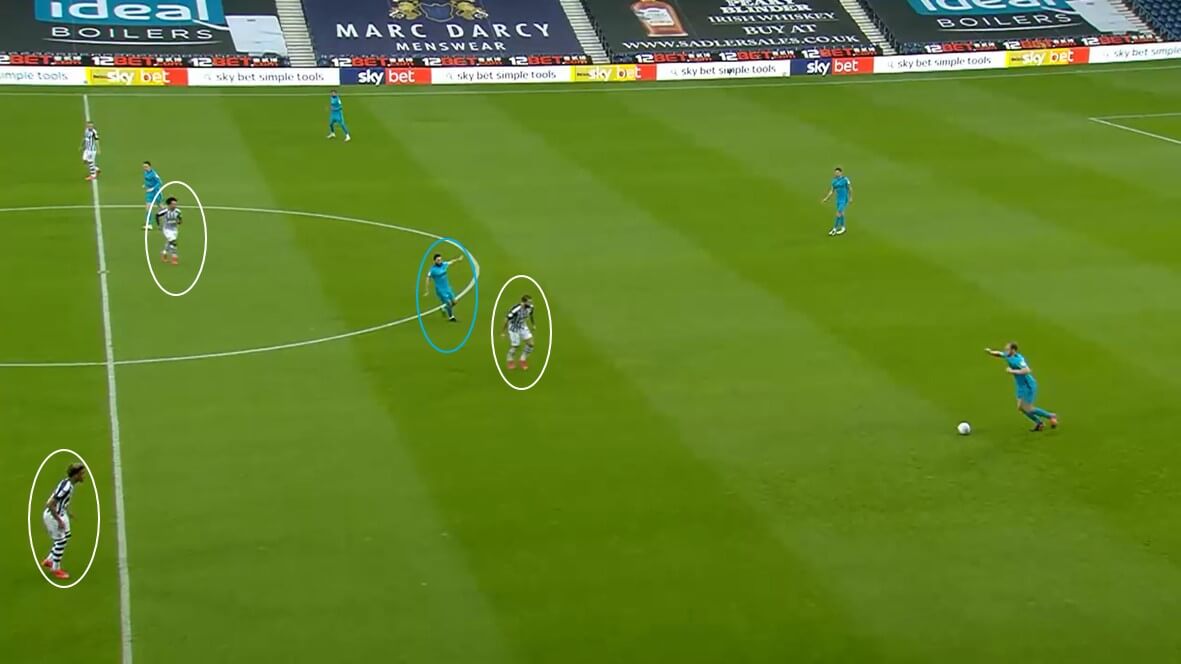 Their general structure is visible above. Their primary goal was to prevent access to Shinnie, thereby dictating Austin’s positioning. Diangana can stop a potential pass into Holmes within the half-space, whilst also being ready to jump up and engage the left-back. Pereira shifts across to either stop a diagonal pass or, press the other centre-back if needed. 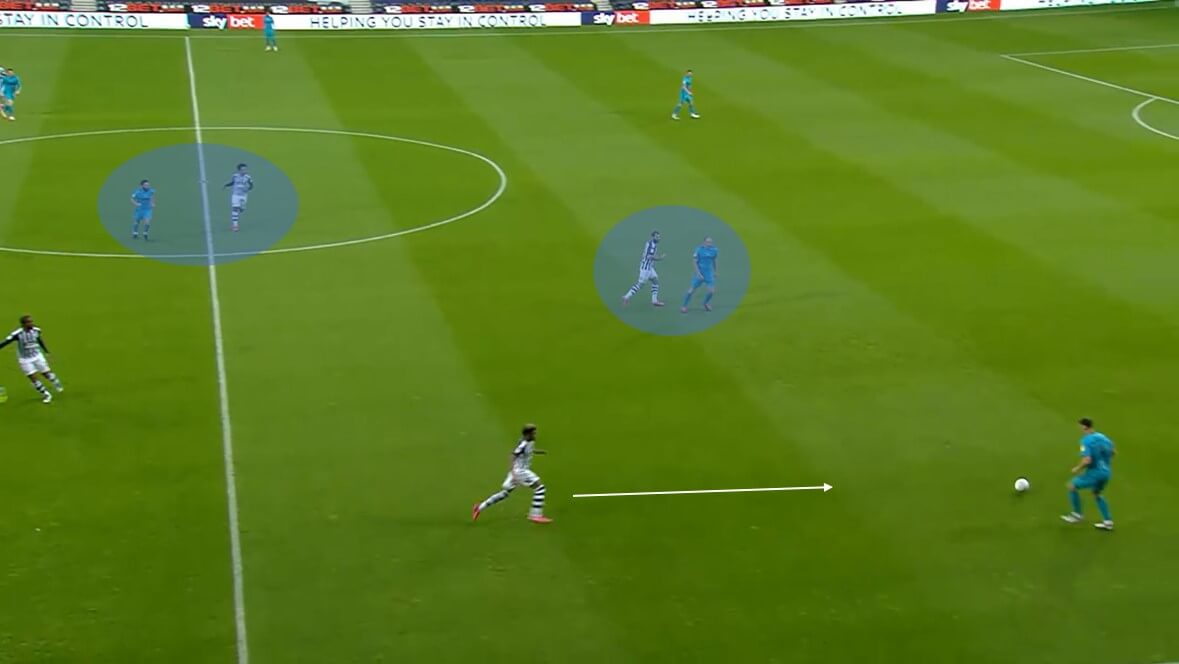 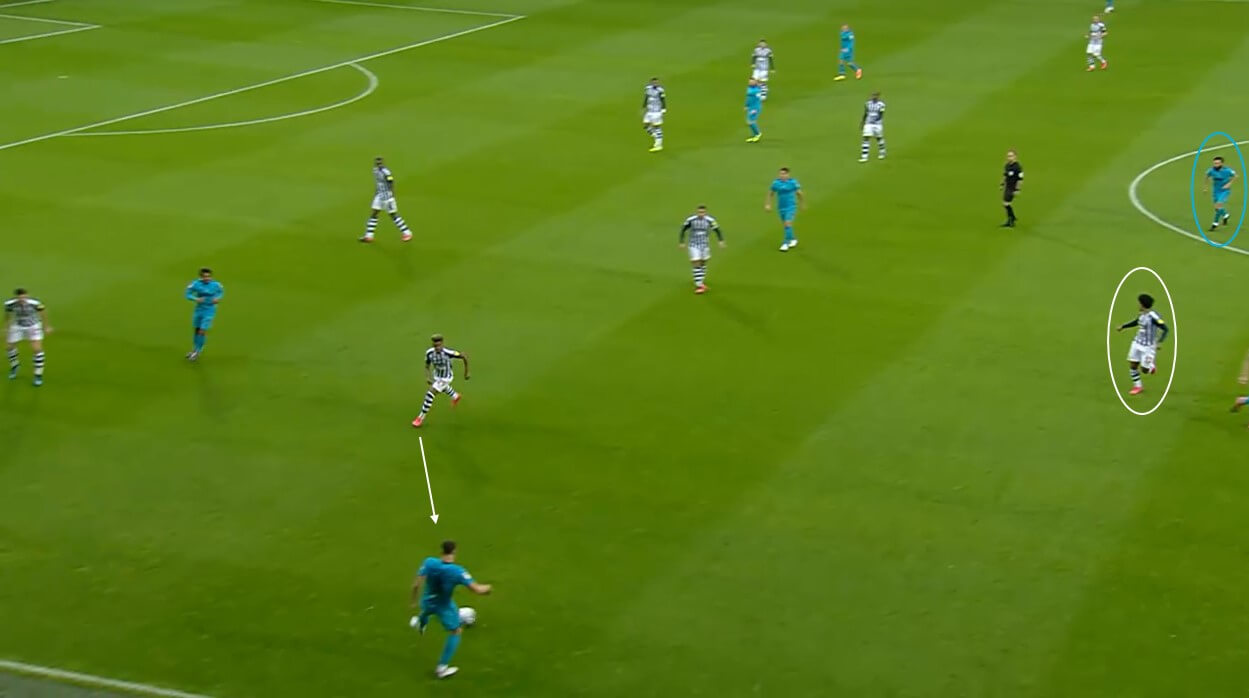 Here is it again, with Pereira being clever once more in the areas he covers.  Diangana jumps forward to press Craig Forsyth, meaning Holmes is in his cover shadow. The only productive pass, therefore, is into midfield towards Shinnie. We can see how Pereira scans over his right shoulder and identifies this possibility. Consequently, he steps to his right (our left) to nullify this option. Diangana then overwhelms Forsyth and has a successful turnover. 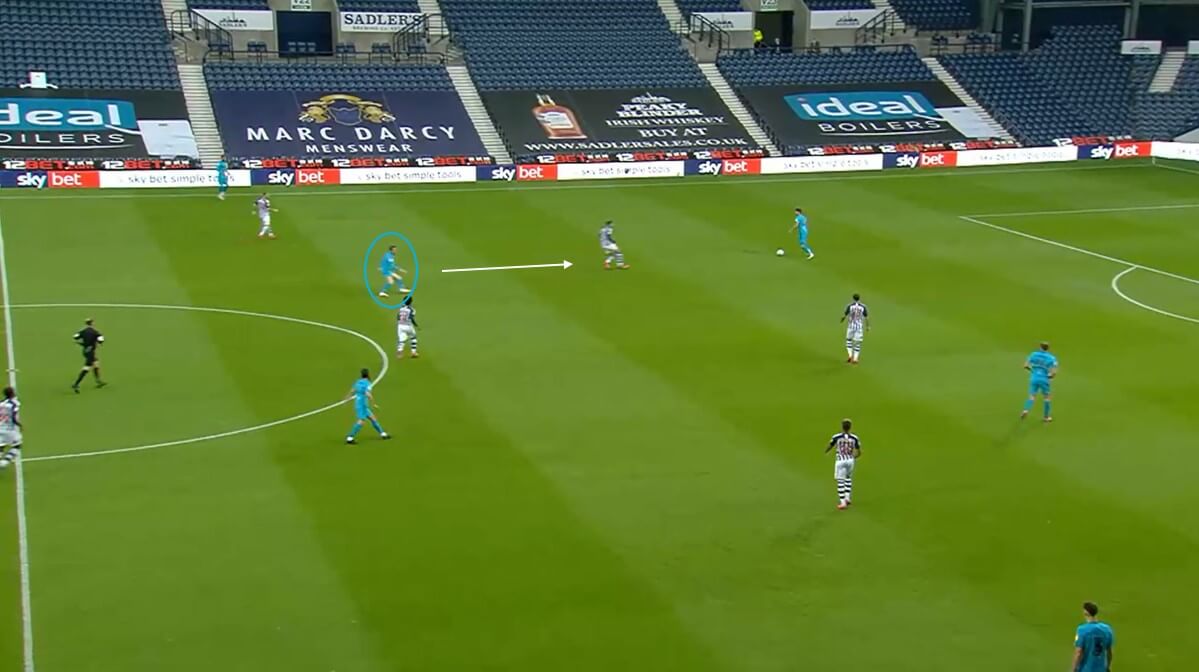 This example portrays West Brom adapting their structure as a result of Derby forming a double pivot due to Bird coming a bit deeper. The front two are slow in shifting, instigating a press from Livermore onto the centre-back. Furthermore, this has led to the former Hull player hindering the option to Bird. There is good coverage and staggering apparent in what we can see here. 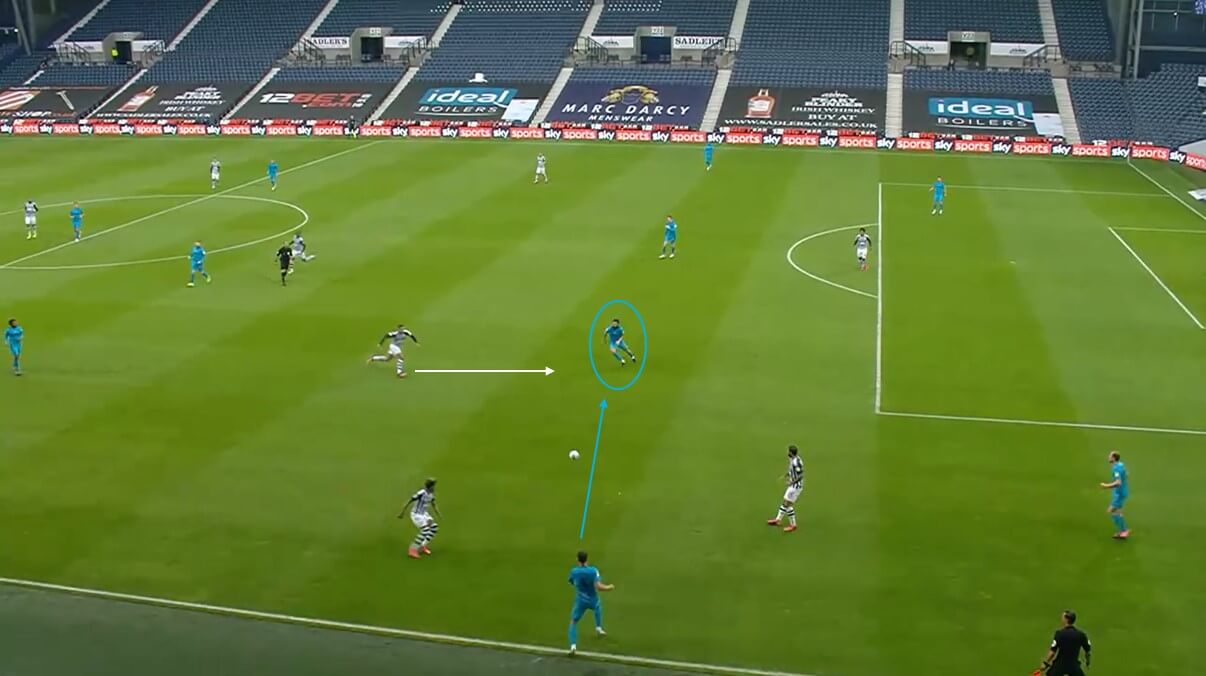 Here shows Livermore’s aggression when West Brom initiate a high press – which was rare. Like the last example, Forsyth receives off Clarke and seeks Shinnie centrally. However, Livermore anticipates this and advances from a deeper position. This significantly reduces Shinnie’s time, thus forcing a turnover and a great goalscoring chance to develop.

The major change the Dutchman made was restoring Rooney to the deeper, double pivot role he has played routinely during his time at Derby. Furthermore, unlike in the first 45 where Bird had license to push forward, Rooney remained next to Shinnie. This created a box shape, generating 4v2 numerical superiority over the Baggies’ strike pairing. 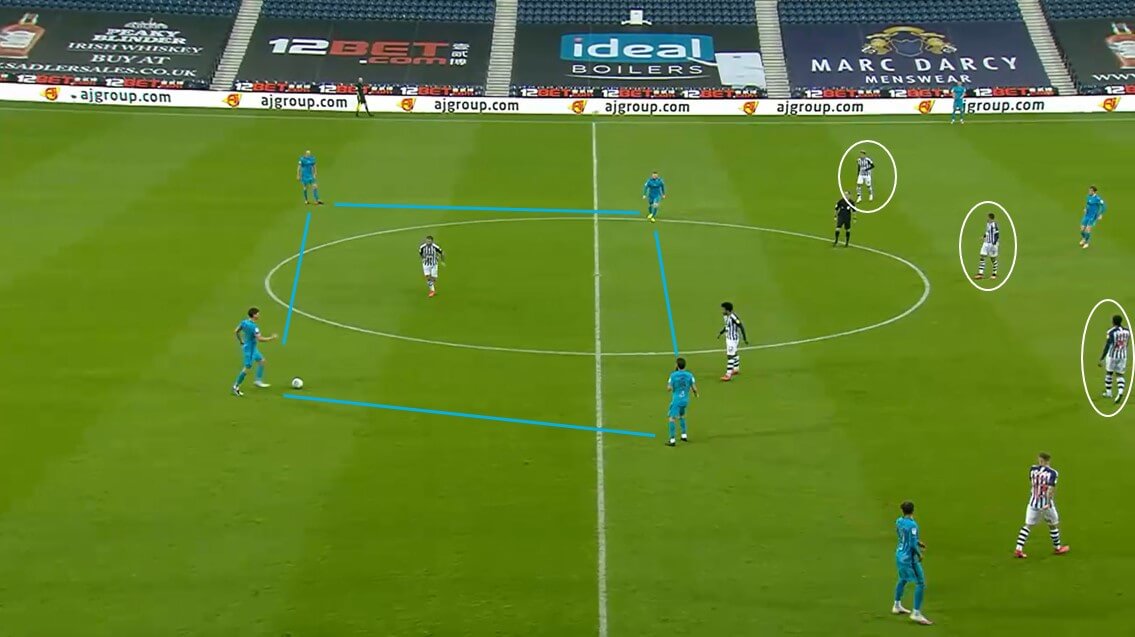 This image above shows such a scenario. The Rams had struggled in the first half in getting into the final third, instead, having much passive possession. Austin is likely being occupied to some extent by Rooney, leaving an open passing lane to Clarke who has space to move into. Additionally, Rooney’s presence will cause left-winger Callum Robinson with a decisional problem: mark Rooney and leave the passing lane to Forsyth open, or vice-versa for Rooney in the half-space. Livermore and Sawyers cannot move out due to them being pinned by Bird and Sibley. 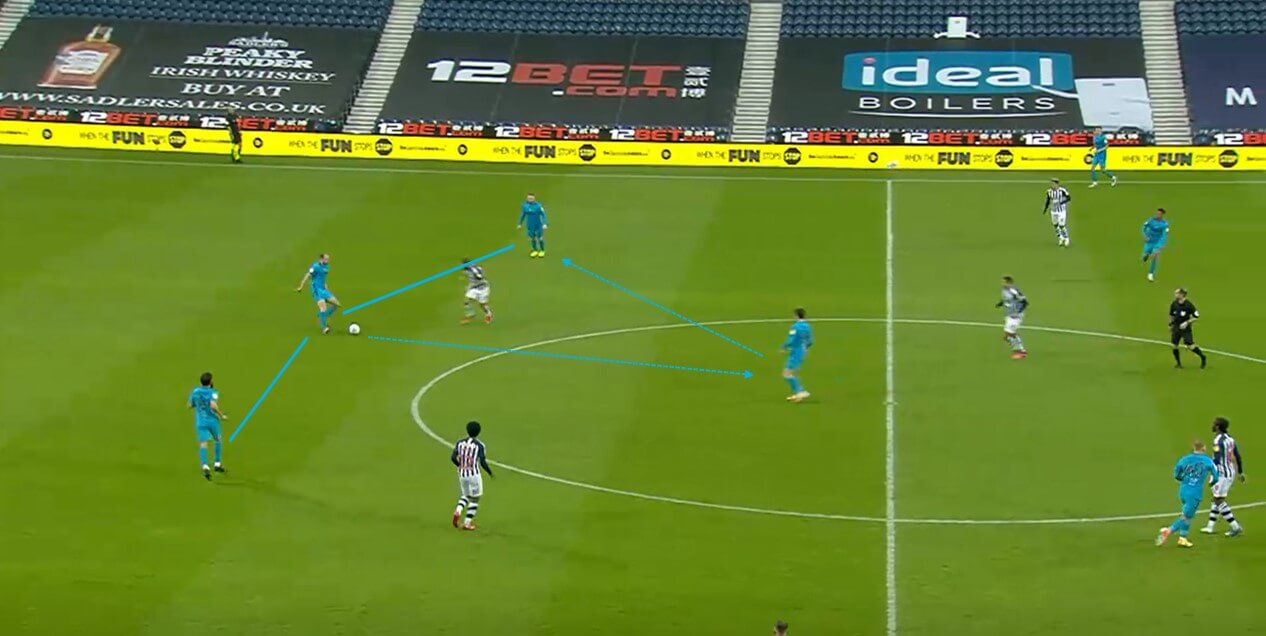 There were also occasions where Rooney did indeed drop into the first line, next to the centre-backs, particularly in the left-half-space. Therefore, a situational 3v2 numerical superiority then developed. This is evident in the picture above. Within the game context, this can incite a press from the second line. Here below – a continuation from the previous image – Robinson presses Rooney, thus releasing Morgan Whittaker between the lines, who Rooney then finds. 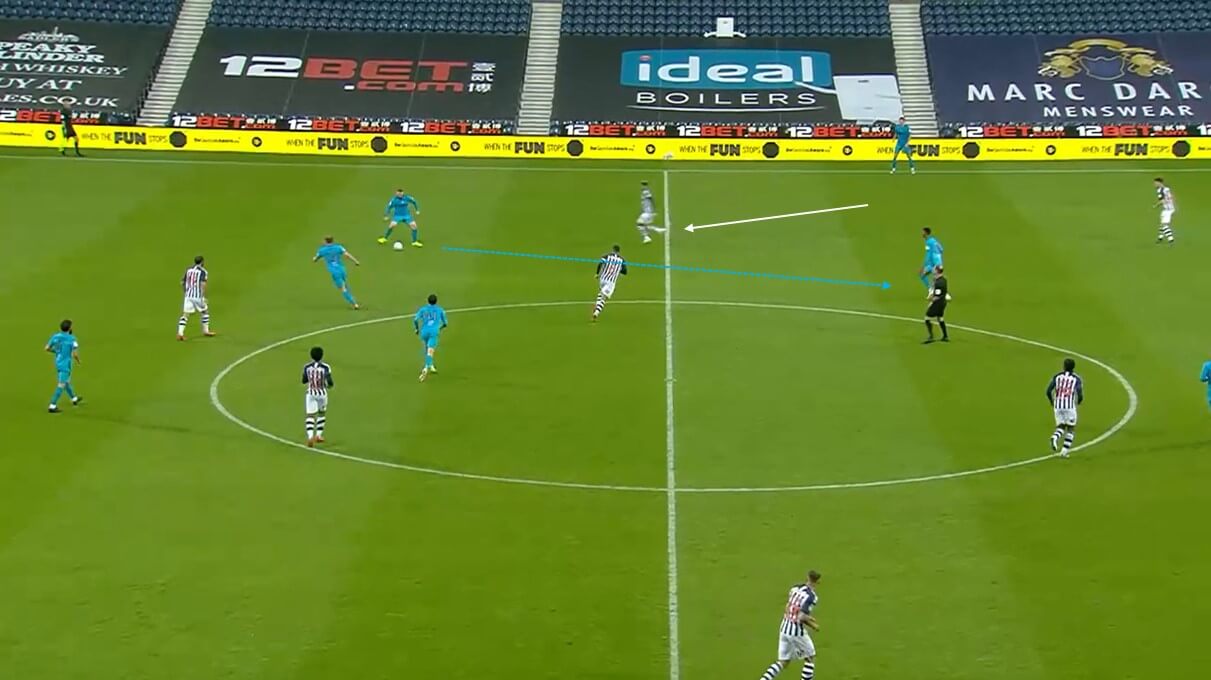 Derby only registered 0.04xG, a very poor figure. A key issue that plagued their attack was a lack of depth. Runners beyond can create space for those between the lines. Martin, however, tended not to do this and generally, all the attackers preferred the ball to feet, which resulted in forward areas becoming congested. The below image shows the optimal spacing present in Derby’s offence, but they didn’t manipulate the defensive line enough. For instance, Whittaker makes a safe run looking for a simple pass into feet – but into the cover shadow of Grosicki. Running in-behind could drag the full-back with him and see space appear for his teammates to exploit, such as Rooney. 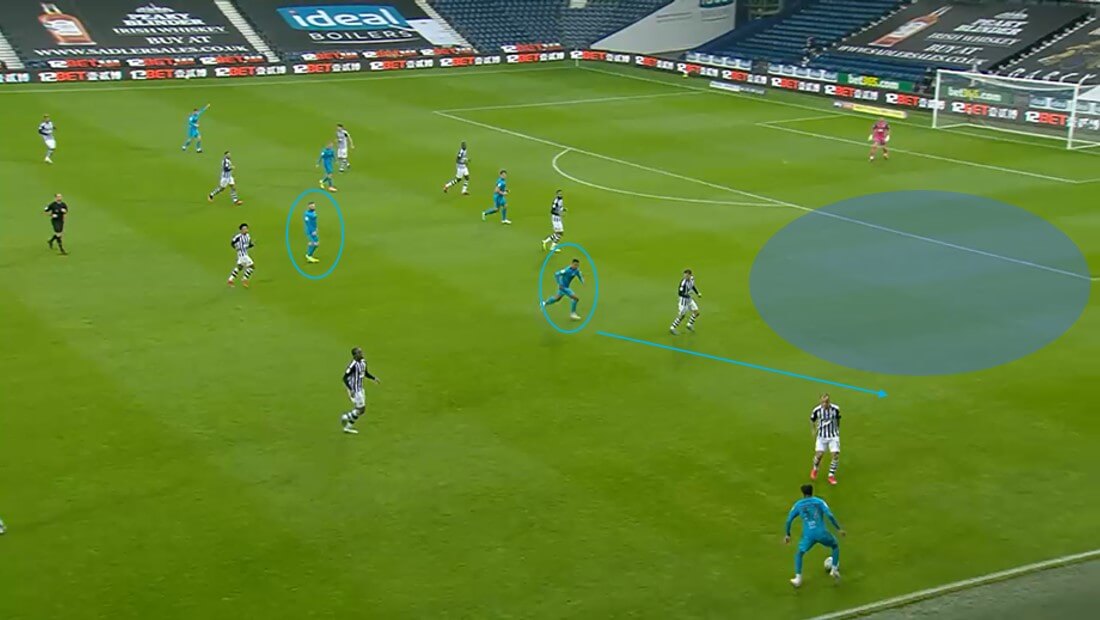 In a vital game, West Brom produced a superb performance. They were content in sit in and soak up pressure but also provided an attacking threat, creating several opportunities on the counter-attack. These three points also took them back to first place with 80 points. For Derby, this was a setback but some of their play was impressive, they just lacked potency and a killer instinct. The Rams sit ninth, three points off Cardiff in sixth.