After a three-month hiatus, the EFL Championship has now returned for what can only be called an absolute sprint finish. Nine games will be played in a month, with four then potentially having another three on top in their quest for promotion to the Premier League. As time progresses the effects of this unprecedented schedule will be fascinating to observe – even more than the usual rigours of a run-in – and to see who copes best.

The first game in this marathon was between Fulham and Brentford – a huge game. Both still maintain hope of promotion, residing third and fourth respectively, with the added complication of a west London derby, albeit without fans. The Cottagers arrived to great expectations this campaign, possessing a supremely talented squad, but have been inconsistent in Scott Parker’s first managerial role. Thomas Frank’s side has also suffered at key points of the season, making up lost ground for a poor start to the season.

In this tactical analysis I will conduct analysis to look at the tactics of Fulham and Brentford in this EFL Championship opener.

These two images below illustrate some of the tactical nuances within Fulham and Brentford’s play respectively. They were created by my fellow analyst Dylan Buesnel, who currently writes on the site ‘EFL Analysis’. 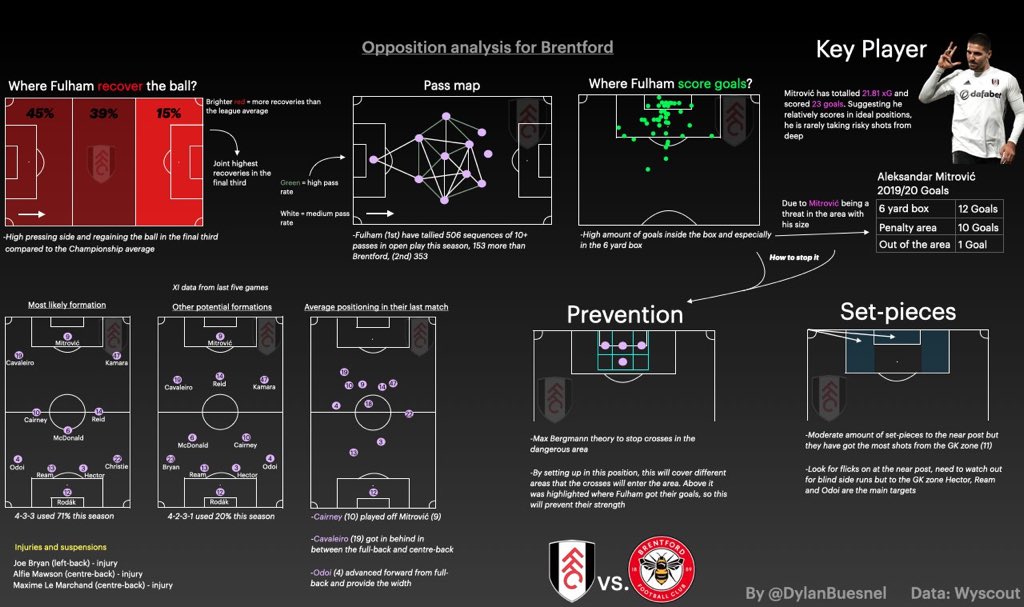 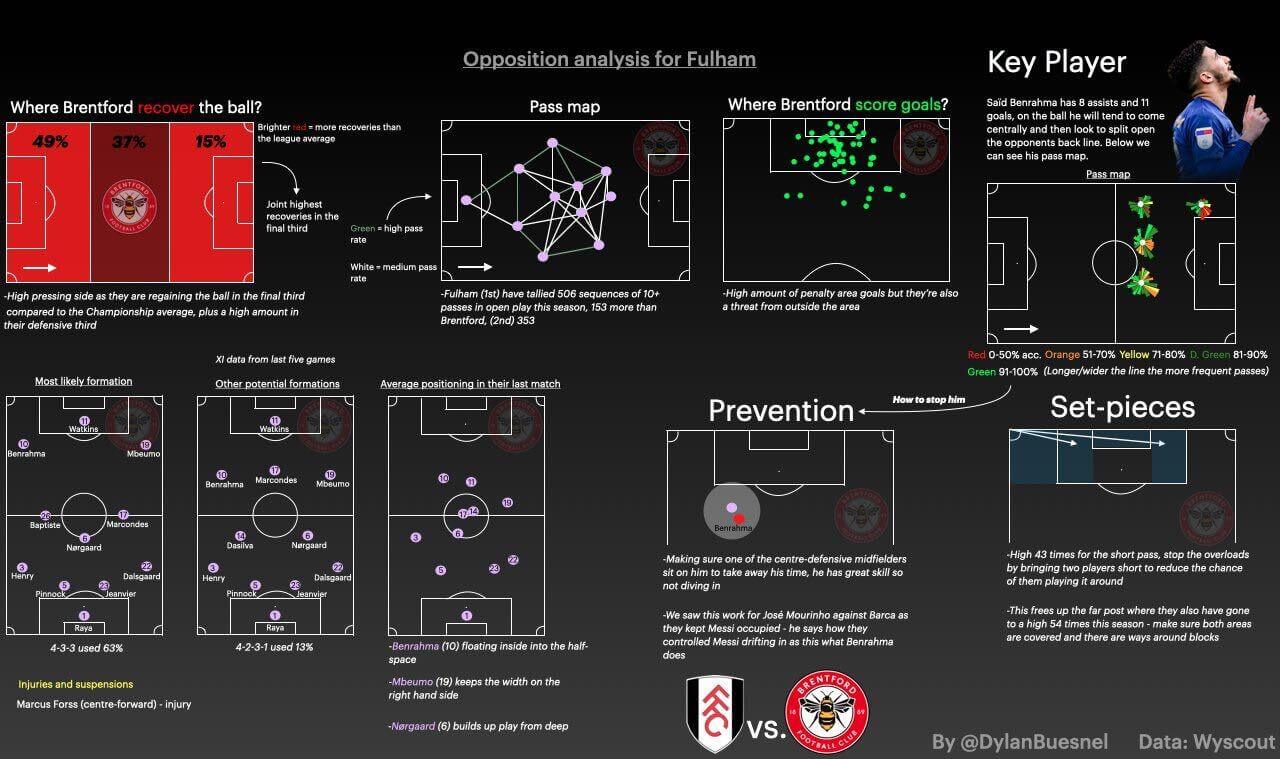 Both sides lined up in their regular 4-3-3 formations. Thanks to the lengthy-time off Fulham had a full-strength side. Harrison Reed returned to a midfield role. Neeskens Kebano was perhaps a surprise inclusion on the left-wing in favour of Ivan Cavaleiro. Brentford, however, were without Bryan Mbeumo who was self-isolating after testing positive, with January signing Tariqe Fosu starting instead. Elsewhere, Pontus Jansson returned to the centre of the defence after a series of injury problems before football’s suspension. Chelsea target Saïd Benrahma started on the left. 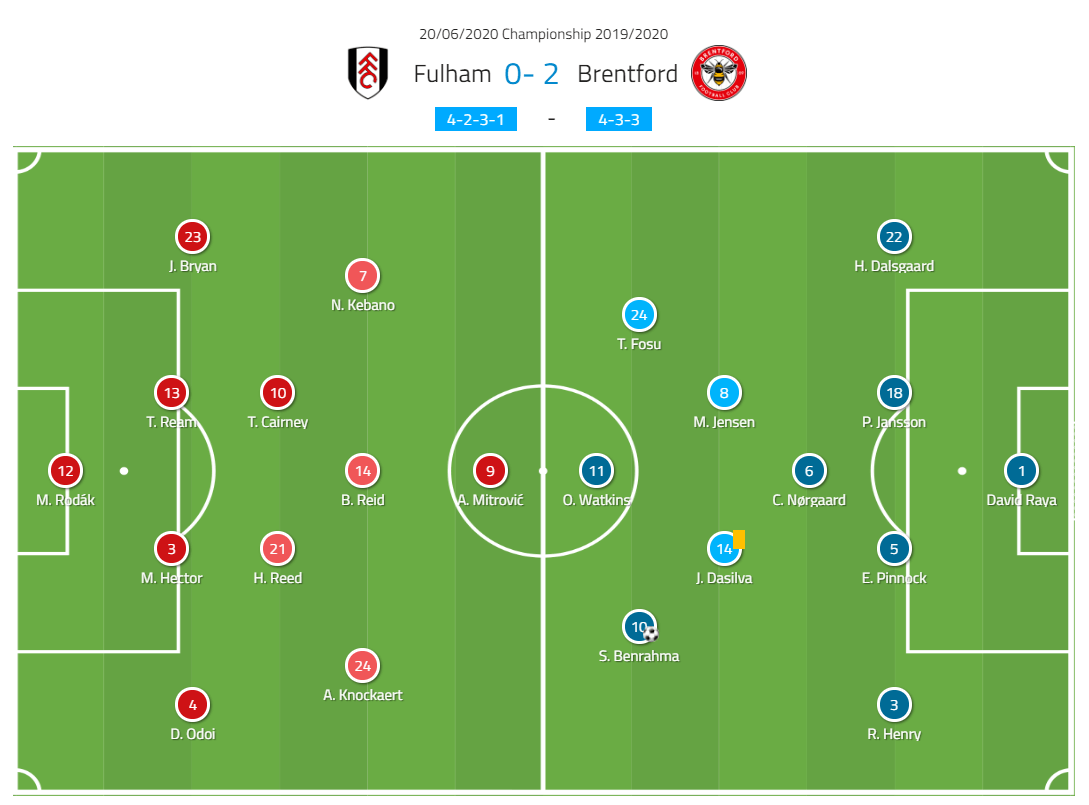 Parker’s preference is to build-up through the thirds, trying to ensure clean ball progression. Initiating offensive moves from deep helps draw the opposition, with the idea to play through and exploit the space they’ve left – this is especially applicable when considering the attacking talent of Fulham, such as Anthony Knockaert and his 1v1 dribbling ability. However, whilst this idealist philosophy is admirable it is complex to execute, therefore a degree of adaptability is necessary. This, though, was lacking – strange because of Mitrović’s undeniable hold-up ability.

Tom Cairney and Bobby Reid were picked as the ‘8’s in Fulham’s 4-3-3. This was an attacking-minded decision by Parker, although their attacking instincts could be balanced by Harrison Reed’s tenacity and discipline. The Southampton loanee was excellent and his withdrawal contributed to the home side’s eventual defeat, something I’ll come onto later. 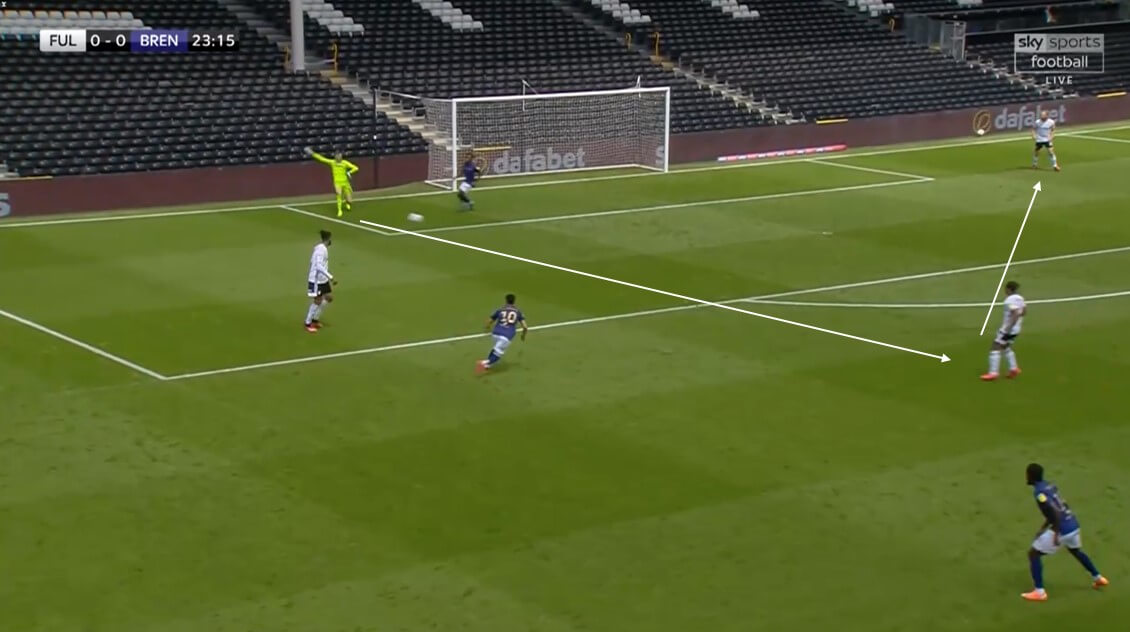 The involvement of Marek Rodák in the first phase alongside the two centre-backs generated numerical superiority against Ollie Watkins as the single striker. Here above, and then below, can see the effects of both Reid and Rodák in helping to evade Brentford’s pressing attempts. Reid falls back to offer a simpler ground pass, before giving it to Tim Ream. And because several Brentford players have advanced to ensure compactness is maintained he can immediately pass to Joe Bryan, thereby completing the sequence. 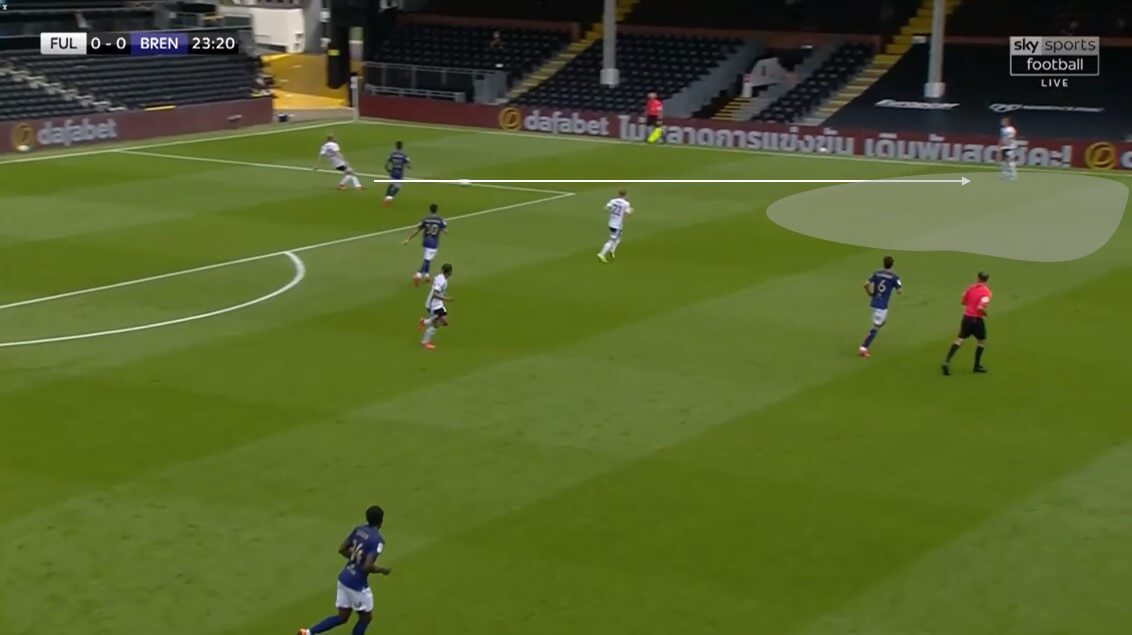 After the centre-backs were in control and circulating they attempted to incite a player from Brentford’s second line to step-up and apply pressure. Consequently, this vacated space could be exploited by one of Cairney or Reid – depending on the side of attack – who would position themselves in a pocket of space. To try and maximise the effect of this and the size of the space afforded the wingers tended to be closer to the touchline. This could create a decisional problem: either press centrally and potentially free the winger wide; or, allow a pass into the half-space. 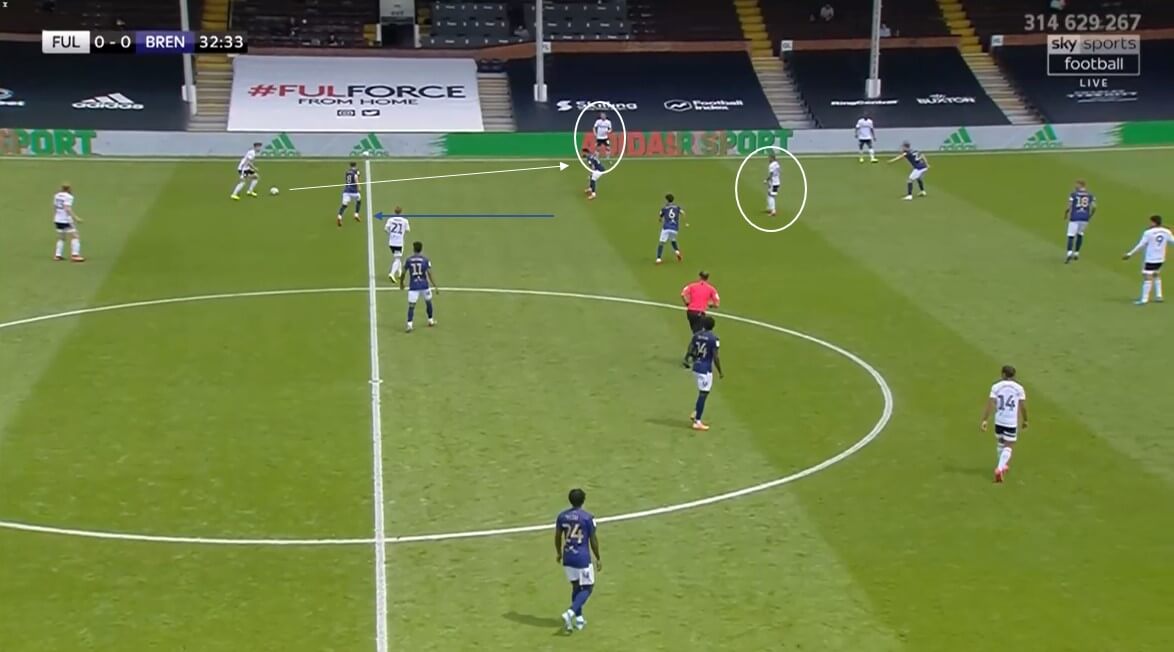 The above image portrays a great example of this occurring. No.8 Mathias Jensen over-commits, resulting in Benrahma being overloaded by Bryan and Knockaert and the Algerian being bypassed easily. 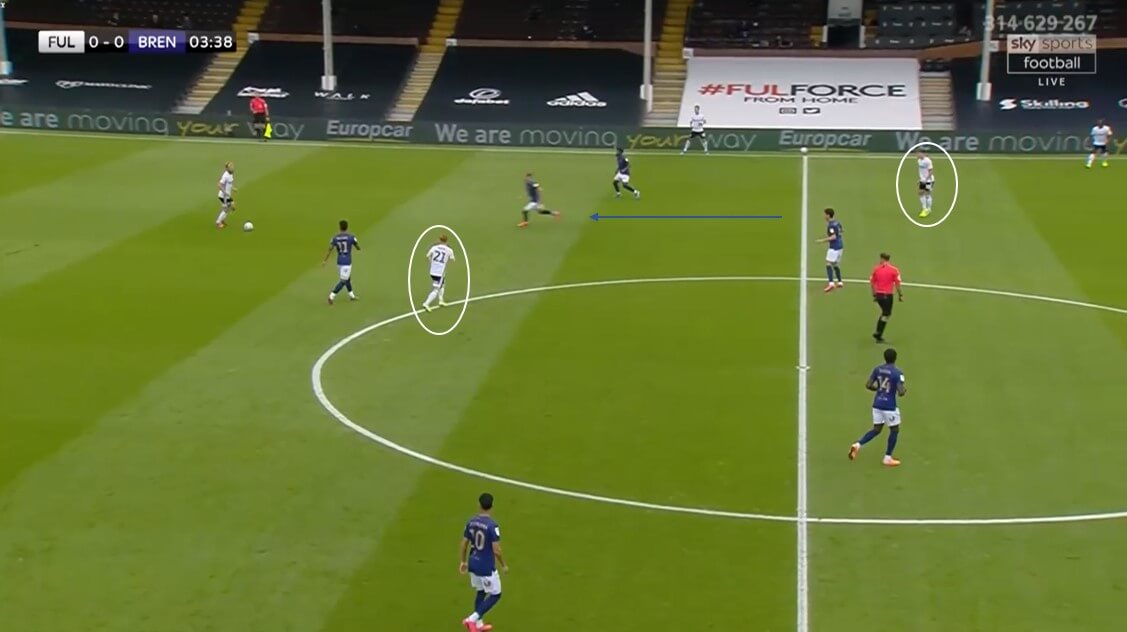 Again, here Jensen presses, leaving Cairney open. However, despite Reed seemingly being available behind the first line, Ream is passive and goes back – indicative of their struggles, or lack of ambition.

But problems like this were prevalent – mainly due to little invention in the first-phase. Brentford’s defensive structure blocked passing lanes, therefore there was a need to manipulate them. This can commonly come via overloads or rotations, for example. Ultimately their play was too stagnant, with an evident absence of creativity. Here below a combination of limited passing options and well-placed Brentford players force the ball back to the keeper. For instance, dropping Harrison Reed into the first line more often would have provided increased coverage and would’ve stretched the Brentford shape to a greater extent. 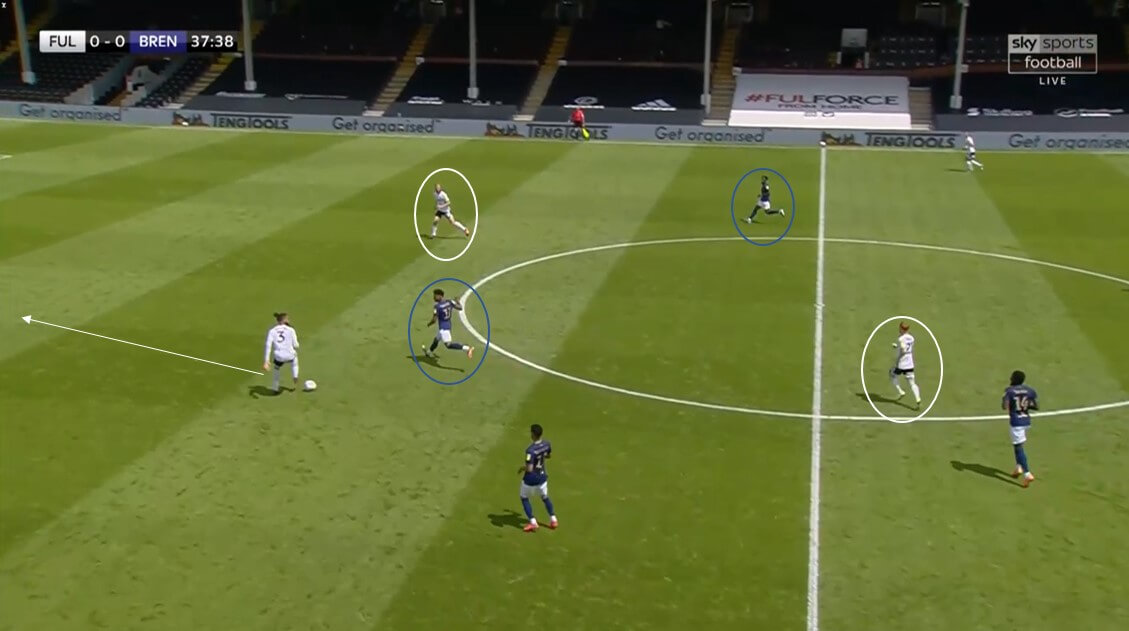 Furthermore, a key principle when attacking is to provide depth; this is imperative for optimum spacing. A by-product of these runs in-behind is to release players between the lines, in this case, the second and third defensive line. Mitrović’s profile is not particularly suited to this but the wingers should have made this movement more frequently. This subsequently led to the midfield becoming congested and their spells of possession lacking purpose and incisiveness.

Like their opponents, the Bees favour a more possession-based approach. Unlike Fulham, however, they found more success in reaching their forwards. Much of this originated from their centre-backs, who were aggressive in their passing and created diagonal passing lanes into players like Watkins who were positioned between the lines. Brentford attempted 103 progressive passes, completing 74 of them (72% accuracy). In comparison, Fulham only attempted 64, with a 59% completion rate. Brentford’s centre-back pairing made 15 progressive passes between whereas Fulham’s only made five.

While Reed did indeed have a good game, he was prone to being overloaded in his role as a lone pivot. This was because of Watkins’s dropping movements, thus generating a 4v3 and numerical in midfield, or, through Brentford’s wingers drifting inside, thereby giving licence to the full-backs to advance. We can see this below. Christian Nørgaard has possession with both Benrahma and Watkins being feasible passing options. Their dual presence means that there is an opportunity for ball progression, due to Reed’s focus on Benrahma 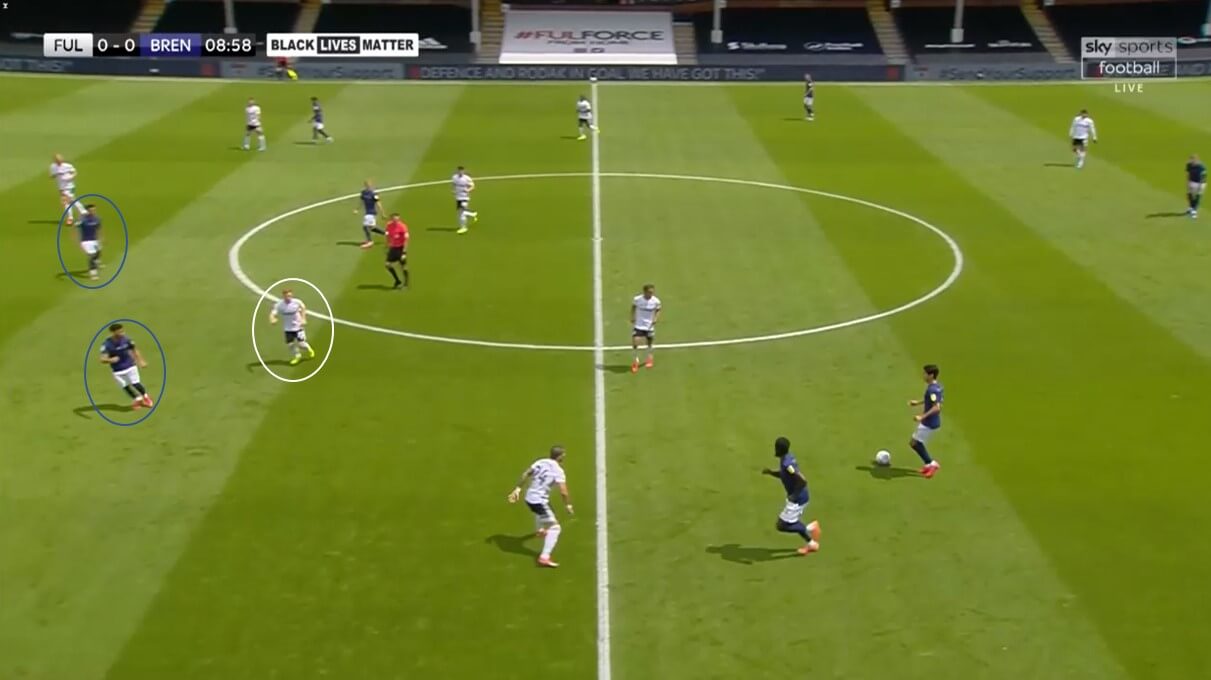 Third man passes that occur as a result of such combinations give superior body orientation, due to them likely facing forward upon receiving. Such moves were necessary as Fulham also had a focus on preventing access to the half-space. 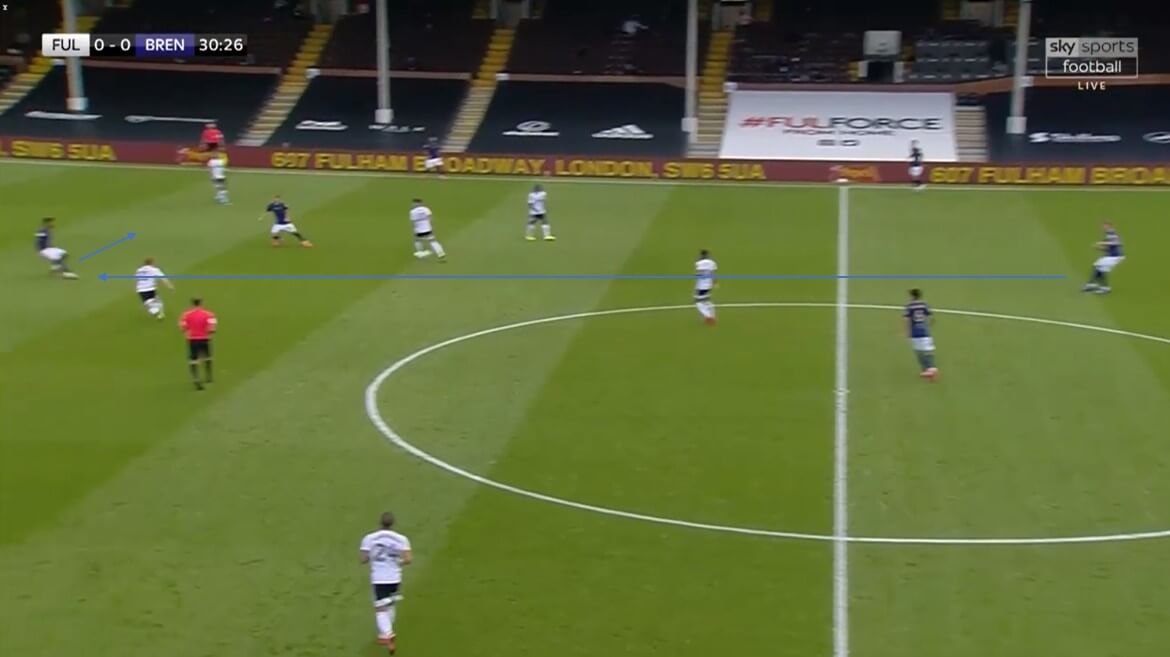 This example above illustrates how Brentford could gain access to the half-space. Right-centre-back Jansson makes a pass that bypasses Fulham’s second line towards Watkins, who has dropped off his marker. Jensen is already located in the half-space; therefore, Watkins has a simple lay-off.

Brentford’s substitute adjustments give them the edge

In the 70th minute, Frank made a double change, bringing on Emiliano Marcondes and Shandon Baptiste. We can see below how these changes affected the system, with the main difference being Josh Dasilva – usually a central-midfielder – moving to right-wing. This switch saw Brentford gain greater control of the midfield area, helping them to create free men more frequently. Additionally, the widest central-midfielders would move across to help support the wide players. This midfield dominance also allowed the full-backs to push up more, thus pinning back their direct opponents and forcing them to conduct defensive duties. 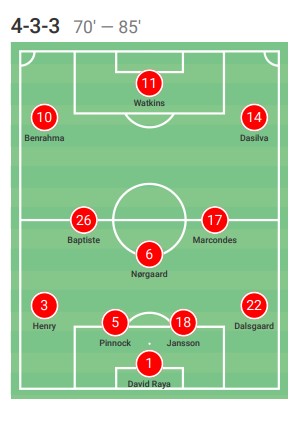 Here below is a good example of how that extra midfield body simplified ball progression. Henrik Dalsgaard initially has possession centrally with both Dasilva and Baptiste available to receive. Consequently, the Fulham midfield is overloaded and bypassed – Reed’s frustration is evident in his body language. It is important to note that while the binary structure did not change, the change in personnel and their individual tendencies saw Brentford become dominant. 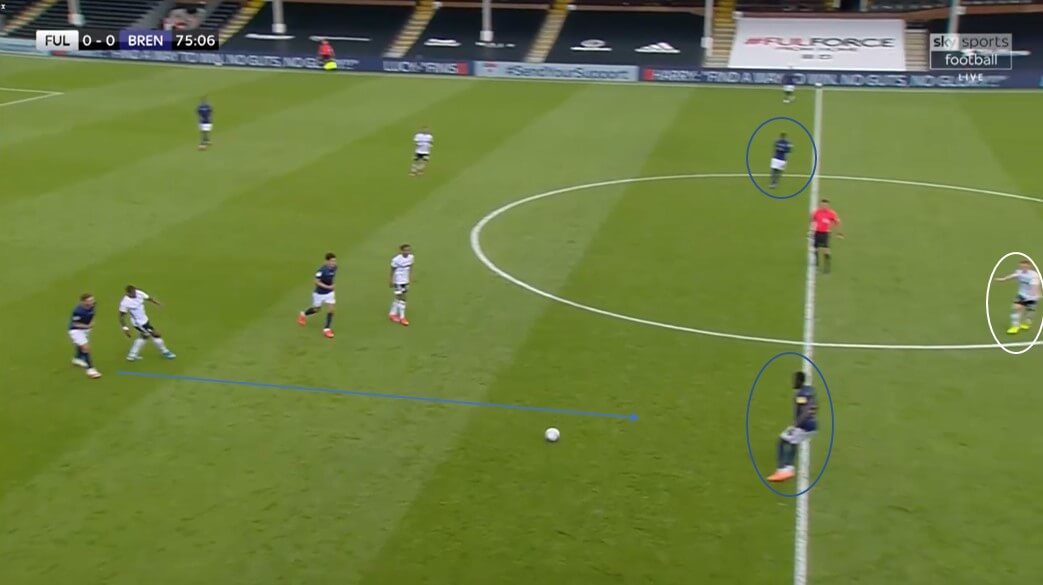 Here is a snapshot of the moments before the decisive first goal. Joel Valencia is occupying the wing, while Marcondes – the assister – is in the half-space. Knockaert is in a position where he cannot mark both Valencia and Marcondes. This situation allows for Marcondes to receive in space and a dangerous area. The 25-year-old then has time to put in a cross for Benrahma to score at the far-post. 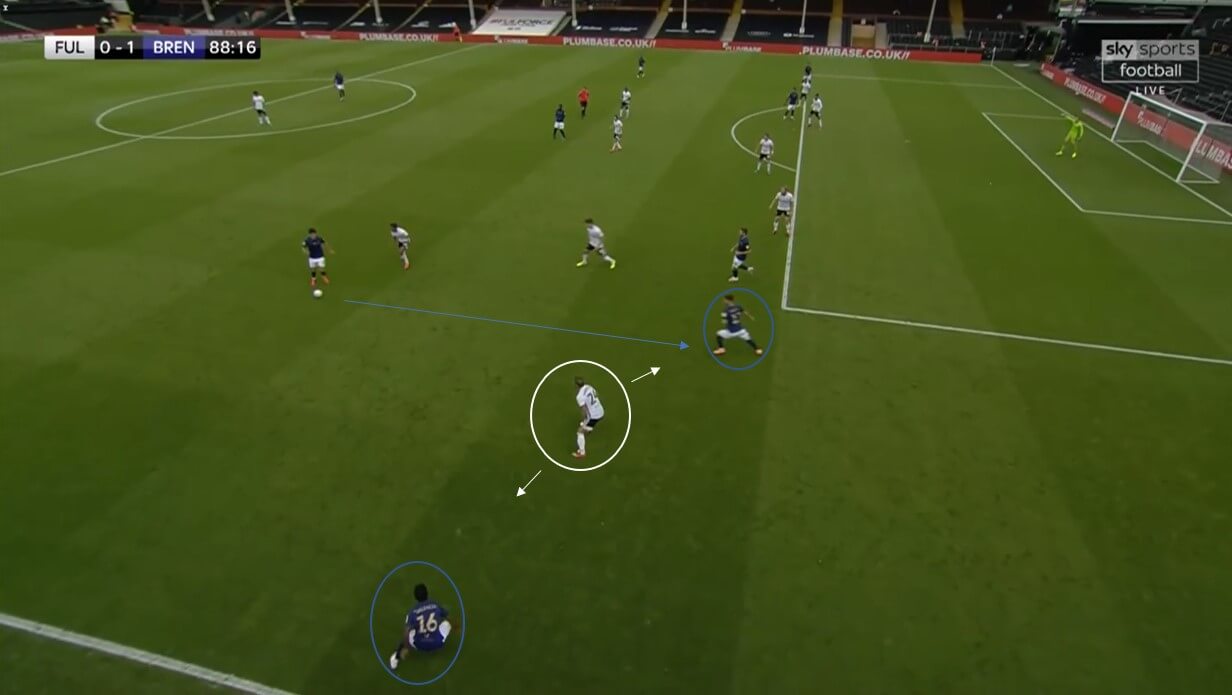 In this final example, the triangles created are visible. Dalsgaard exploits disorganisation in Fulham’s defensive structure whereby Knockaert is isolated on the right flank, to progress the attack. 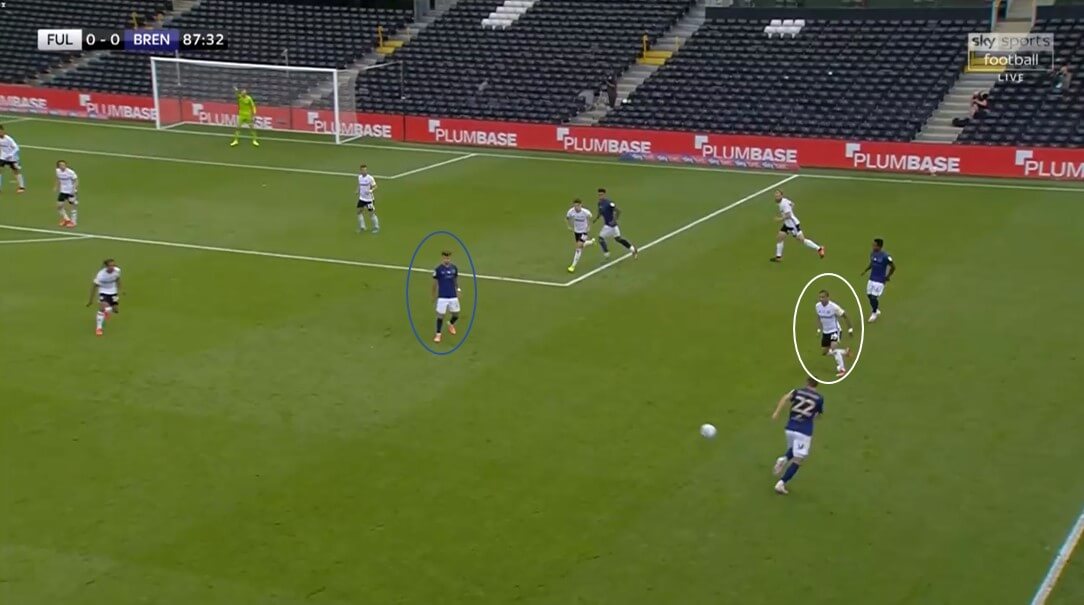 Ultimately Frank’s substitutions culminated in overloads being created repeatedly – particularly on the wings –, as well as his side making better use of them than in the first 45. Parker’s decision to take off Reed despite his vital role nullifying Brentford’s attack – in which his perseverance interrupted their attacking flow – granted the Bees more freedom in the final third.

The importance of this game was apparent before kick-off and this perhaps surprising result has serious effects on the promotion race. Fulham now have an even tougher task to gain ground to West Brom and Leeds in the automatics. Generating 1.11xG at home also isn’t helpful when seeking an important win. After this round of matches, Brentford sits eight points off second, a tough task but beating West Brom next Friday will be a great start.