In their first outing of the 2020/21 campaign, following the UEFA Champions League defeat to Manchester City which brought last season to an end, Real Madrid were strong, rather than spectacular. Real Sociedad, on the other hand, had all the hallmarks of a side whose pre-season campaign had been decimated by injuries before returning to action last weekend.

Neither side had many real clear-cut chances, with Alexander Isak likely going closest as he tested Thibaut Courtois in a one-on-one which only the Belgian’s outstretched legs could reach. Real Madrid themselves had more chances, but were limited in terms of how much of a threat they really posed, amassing just 0.75 xG.

This tactical analysis will consider the tactics in an analysis of Real Sociedad and Real Madrid in La Liga. Zinedine Zidane and Imanol Alguacil both made intriguing tactical choices and they will be analysed here. 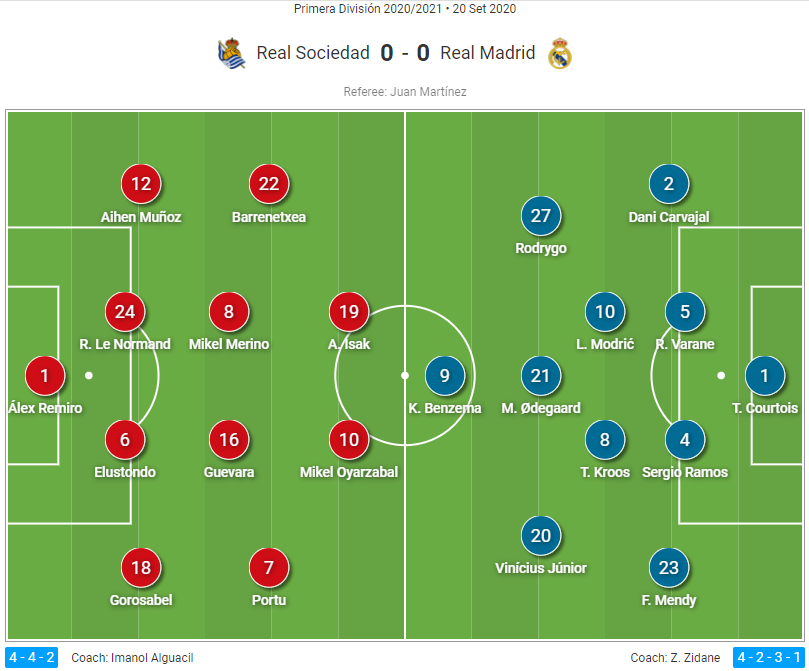 Real Sociedad had a boost through their team news as captain Mikel Oyarzabal returned to the side after his pre-season was interrupted by a positive case of Covid-19. Ruben Le Normand and Ander Guevara also returned to the side, with goalscorer Roberto López and Igor Zubeldia the two men to make way from the squad selection.

Zidane sprung a surprise with his Real Madrid team selection, choosing Ødegaard ahead of Casemiro in midfield in a shock selection. Beyond that decision, it was as expected with injuries striking down many of the coach’s wide options, giving starts to Vinícius Júnior and Rodrygo Goes in attack while Ferland Mendy got the nod as the starting left-back ahead of Marcelo.

Ødegaard came into the team to provide a more offensive aspect in a side which had a new look, without the usual 4-3-3 shape that we have come to know and love under Zidane’s command at Real Madrid. Instead, he lined up at the tip of a three-man midfield, almost more like a 4-2-3-1 shape and taking up a role that was previously occupied by Isco when he was a regular starter for Los Blancos. This saw him act as the offensive tip, supporting Karim Benzema and then dropping into a deeper role when not on the ball.

In possession, Ødegaard would start in a deeper position, almost more akin to a usual 4-3-3 midfield trio. But as soon as Toni Kroos or Luka Modrić came onto the ball, he would quickly use his speed to make a run to position himself in between the defensive and midfield lines of Real Sociedad. This provided another dimension to the Real Madrid attack as it allowed Benzema to stick to a more offensive role or drift wide, giving two options between the line. The result was that the Frenchman was not as isolated as previously.

When out of possession, he also played a valuable role. When under pressure, he would drop into that 4-3-3 shape as an additional midfielder, but when Real Sociedad were on the ball deep in their own half, he would support a high press from Benzema. Vinícius and Rodrygo would sit a little deeper, covering the full-backs but without leaving the full-backs vulnerable. Ødegaard would then take up a reserve position, denying a passing channel to the second central defender and pressing high.

The negative from Ødegaard’s performance came in that he was tired. This is noticeable in that in the first 30 minutes of action, he received a pass every 78 seconds, with more than two-thirds of those passes being received in the final third. In comparison, his second-half average was a pass received every 110 seconds, with only a third of them coming in the second half. This reflected how his movement slowed and was less threatening as his influence faded with his fitness.

Real Sociedad have time and time again been accused of lacking fluidity, dating back to the return from lockdown. Their free-flowing passing and movement from the first half of the season has vanished and instead the team has looked devoid of confidence. Here, against Real Madrid, it was particularly evident for Alexander Isak. The Swedish centre-forward was supported by Ander Barrenetxea and Oyarzabal but they both tended to drop deeper, with Barrenetxea also drifting further wide. The result was that the central areas were left for Isak to occupy almost single-handedly, without support from the midfield.

As can be seen in this example, goalkeeper Álex Remiro was left with only one choice, to play a long flat ball through to Isak in order to evade pressure from Real Madrid’s forwards, as touched upon previously. However, when Isak receives the ball he has no open passing channels directly ahead of him and his positioning is far from ideal, with his back to both passing options, meaning that he would have to take at least two touches to be able to turn and play a pass comfortably. With Varane pressing him from behind, that was always going to be a difficult task. In the end, he resorted to playing the ball straight out of play.

Isak was clearly frustrated and was forced to drift wide to pick up the ball and interlink with play. Both of his shots, totalling only 0.23 xG, came from such moves, moving wide to collect the ball and then running into the box from a wide angle on the left. The fact that he was replaced by Silva, rather than an out-and-out striker, reflects that this approach was not working for Alguacil’s team and that they instead needed more of a presence deeper – firstly to release the pressure, but also to attack the flanks and look to get in behind full-backs, rather than engage Varane and Sergio Ramos in the middle as Isak was attempting to.

Post-match, many of the questions asked of Zidane revolved around his decision to not bring on either of the two strikers available to him on the bench in Borja Mayoral and, even more controversially, Luka Jović. Instead, youngsters Marvin Park and Sergio Arribas were given debuts to strengthen the wide areas. Zidane responded that it was a tactical decision, one aiming to avoid disrupting the system, and it made perfect sense. Despite the criticism, it’s easy to see why Zidane made the decision he did.

Real Sociedad are a naturally very narrow side, their wide forwards tend to drift centrally. That opens up space down the flanks, particularly for opposition full-backs and that was where Dani Carvajal and Mendy could get forward, as shown above. They were dangerous with this approach and could operate in half-spaces and then push on to overlap with Vinícius and Rodrygo offering a wide threat, but also able to drift inside to support Benzema.

The lack of threat from this approach came through two reasons. One of them is that Rodrygo is not accustomed to playing on the right, typically playing on the left flank. Here, particularly drifting inside more regularly, he could not open up and shoot and was instead left floating around without being able to make an impact on his rocket of a right foot. The other is that central areas became congested. With Ødegaard in behind earlier on, and then with two wingers drifting into central areas, Benzema could not make his usual drop-off runs to prepare for crosses. Adding another centre-forward into the mix would have made things even more difficult.

However, late on in the game, his critics found their explanation. In the final few minutes, Real Madrid overloaded the box and had plenty of players in central areas, with Ramos even stepping up into attack in his usual role of target man striker in emergencies. This will, of course, have opened Zidane up to questions. Is Ramos a preferable option to Jović in attack? While his aerial ability may give him the nod, with five substitutions available, it does seem a questionable call to bring on a young debutant in injury time when chasing a game if they are to play out wide against Real Sociedad, who were playing in a very low block by this stage. Even fresh legs and pace would not be impactful against a side sat deep. Instead, more of a central presence from earlier on in the tie, or a natural finisher in the box, could have been more powerful.

This result has led to great frustration with Zidane and Real Madrid. Yet, that seems harsh. Ødegaard showed potential and Zidane was not afraid to mix things up, springing a surprise on Alguacil with his team selection. That is something that many of his critics have complained about before, a lack of flexibility in his tactical approach, but which Zidane used to his strength on Sunday. Elsewhere, defensively they were strong and the midfield looked good. The attack looked disjointed and turgid, but that is to be expected. Vinícius and Rodrygo remain teenagers and not first-choice options if the squad is fully fit. Adding another striker into the mix would have only complicated things further and Zidane was justified in avoiding over-congesting the central areas. There is room for improvement, but it would be unfair to be concerned by this display.

Real Sociedad, on the other hand, took another step towards improvement. They started the game brightly and later faded, again seeming to struggle with fitness and finding it difficult to build up any kind of flow with their passing and movement. When a high number of casualties return to the side and Alguacil can find more consistency with his selection, that should become an easier process for his side. Until then, grinding out results like this one will be the way to go.