The Red Bull Arena hosted the kick-off game in the Bundesliga season to the respective sides on 20th September between RB Leipzig and Mainz 05. This tactical analysis will break down the game that ended as a 3-1 victory to Leipzig.

RB Leipzig, led by Julian Nagelsmann, finished the previous Bundesliga season in 3rd place, utilising several young bright talents in the process. Heading into the winter break Leipzig were at the top of the table, five points ahead of then-third placed Bayern Munich. While Bayern would continue to improve dramatically under Hansi Flick, Leipzig would begin to falter under Nagelsmann, who would collect disappointing draws regularly. In this analysis, we will discover how Nagelsmann’s tactics allowed them to gain the victory in this match.

Mainz 05, managed by Achim Beierlorzer, finished the previous Bundesliga season in 13th place, after a mixed season which saw them sack former coach Sandro Schwarz in November 2019. Mainz were a side who suffered defensively last term, ranking as the fourth-worst for xGA in the league, with only two relegated sides and Freiburg placing lower. They also struggled to break the lines from midfield, limiting supply to their top goal scorer, Robin Quaison and their other forwards. This analysis will take a deeper dive in how this continued to be the case in this match-up. 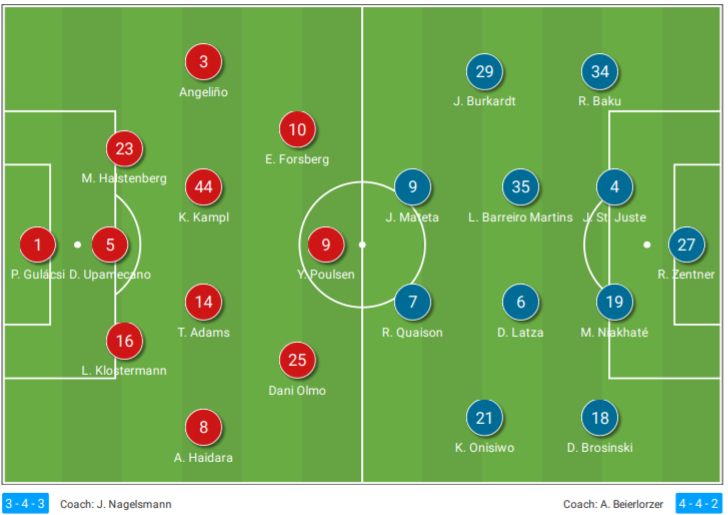 The Leipzig line-up was an experimental one, opting to go for a three at the back, but chose players outside of their typical positions. Gulácsi continues to be the first-choice goalkeeper after a great season last year. Despite links to Manchester United, Upamencano starts in the centre of a back three. Haidara, usually a central-midfielder, and Angeliño were the two wing-backs choices, while Adams and Kampl got their chance in the midfield, after performing well in limited minutes last season, and partly due to the injury of Konrad Laimer. The sale of Timo Werner has adjusted the forward line for Leipzig, with Poulsen acting as a defensive forward to support Olmo and Forsberg in the final third.

The Mainz line-up saw the team shape up in a 4-4-2 rather than usual 4-2-3-1, with a few youthful additions to the side. The back five stayed the same, except that Brosinski came in for Spaniard Aarón Martín at left-back. Latza paired up with 20-year-old Leandro Barreiro, who took Pierre Kunde’s spot in the starting XI. Notably, Quaison acted as a second-striker to Mateta, who was also supplemented by Onisiwo and Mainz academy graduate Burkardt. The ongoing pandemic has restricted Mainz into making just two transfers this summer, with both Luca Kilian and Dimitri Lavalée sitting firmly on the bench for now.

In a 3-4-2-1, Nagelsmann placed heavy emphasis on progressing the ball down the wide channels, creating overloads with the help of Adams and Kampl drifting wide to join the attack. Haidara, the 22-year-old Malian international, made a strong statement with his performances last season but was given irregular chances in the starting XI, collating just 1,107 minutes across all competitions last term. Here, he played outside of his usual central-midfield role and practically occupied a right-midfield role. His main job in this tie was to provide width in the attacking build-up and stretch the opposition defence while former Barcelona player Olmo and Forsberg would occupy the ball.

In the above analysis, we see Olmo occupy the ball centrally, driving forward at the opposition defence, thanks to a vertical pass from Adams. But he wastes this goalscoring opportunity via a long-range effort.

Due to Leipzig’s verticality in possession, they attack the opposition at speed. Their two wingers, Forsberg and Olmo, would position themselves between the lines of the defence and midfield and look to get into space for a passing opportunity. Once the ball arrived in these zones, the wing-backs would join the attack by making runs down the wide channels, to create separation between the forwards and the opposing centre-backs. While the opposition is backpedalling, Haidara and Angeliño would look to get the ball to the byline and produce cut-backs.

Here, we see Forsberg with the ball in the half-space, offloading it out wide to Angeliño, who draws the attention of Baku.

After taking a touch to bring it past Baku, Angeliño approaches the byline and looks to play the ball into the path of Poulsen, who hits it straight at the goalkeeper.

Although, due to his preference to play more centrally, of the two wing-backs, Haidara found himself attacking the half-spaces more often than his Spanish counterpart. He would make runs in-field to either provide whipped early deliveries towards the head of 6’2” Yussuf ‘YuYu’ Poulsen, or provide an additional goal-threat through timing his runs into the penalty area. This dual-threat gave the Mainz backline a lot to consider and he was a thorn in their side for most of the match.

Here, we see Poulsen pull off a backheeled pass towards Forsberg, who is approaching the penalty area. Haidara is positioned in between two Mainz defenders in the box.

Forsberg, off-balance, manages to get the ball into the feet of Haidara, who is now in space inside the penalty area. Sliding on the floor, he slots the ball over the keeper’s body, who goes to his left.

Against Mainz, Nagelsmann’s application of his marauding wing-backs was very successful. They provided a dynamic and effective threat in the final-third, adding to Leipzig’s numerical advantage when they attacked at pace in this match. Haidara and Angeliño completed three and two shot assists respectively, whilst the Malian also notched up a 0.32 xG value in this match as well, making for a well-rounded offensive display.

Playing off of Poulsen, who would regularly drop deep to receive the ball and pass the ball onto one of the two wingers, often with one touch, Forsberg and Olmo used their technical ability to their best in this match. As stated earlier, they would occupy spaces between the lines and receive the ball in the final third. They would then immediately carry the ball forwards with their dribbling abilities. On a few occasions, this created a few shooting opportunities for themselves.

In the above analysis, we see Forsberg carry the ball up the pitch to progress and fast and direct counter-attack.

In the penalty area, Forsberg jinks his body to fool the defender into going one direction, to create space for a shooting opportunity which comes pining off the post.

Both Forsberg and Olmo largely occupied central areas, as they drifted inside to play off of Poulsen, who linked play well in this game. Occasionally, they would switch wings to create a different dynamic for the Mainz defence to deal with. As well as carrying the ball to progress the play, they would both ask questions of the opposition defence inside the penalty area, forcing them into a quick decision to make, or be punished. Never was this more apparent than when Olmo won the penalty for the first goal, a penalty converted by Forsberg.

Here, we see the tackle which brought Olmo down inside the box to cause the penalty to be called by the ref.

These two would also both create space and create chances for Poulsen to take shots on goal in this match. The pair created six shot assists between them in this match while Poulsen managed 12 touches inside the box, allowing him to take seven shots all together in the 90 minutes. Hwang Hee-Chan came off the bench to make his Bundesliga debut. He provided added attacking impetus, with his dribbling ability and chance creation of his own as well.

Here we see Olmo provide a lobbed delivery towards the back post, aiming for Poulsen, who has to deal with two defenders. Due to his height and aerial presence, he towers over both of them and heads the chance into the back of the net.

Hwang Hee-Chan came off the bench and essentially provided more of the same. Here he created a high-value goalscoring opportunity for Poulsen to finish off.

Generally, in this game, Mainz looked like a side with no plan in the attacking phase. They had a plan defensively, which was to drop off and play a conservative style of football without the ball, only regaining possession when the opportunity presented itself cleanly enough. Offensively, their main source of attacking impetus was via a few attempted through balls and hopeful crosses into the box. A couple of times, this created a decent goalscoring opportunity.

Here, we see Brosinski receive the ball after a clearance and immediately looks to play a cross towards the near post. Mateta is positioned between two defenders.

Mateta makes the run towards the near post but misses his headed opportunity.

Their only goal came by a smart through ball from the midfield, and an even smarter run by Mateta. It did not feel like there was an attacking plan in place by Beierlorzer, but instead relying on some of the individual talents from players like Quaison and Mateta. Out of all the Mainz attackers, the most sympathy must be afforded to Mateta, who constantly made the correct runs in behind or offered himself for the pass regularly whenever the ball reached the final third.

On the ball, Quaison notices the run of Mateta from the right half-space, into a central area, behind the defensive line.

Mateta receives and carries the ball towards the approaching goalkeeper. He opens his body to give the impression he will choose the bottom right-hand corner but instead slots it past the left of Gulácsi.

Outside of these moments, Mainz struggled to break down the Leipzig defence. Whenever one of Leipzig’s defenders would roam away from the defensive line, Adams would slot into that hole in the defence to provide cover for the likes of Upamencano and Klostermann. This made Leipzig difficult to break down, but Mainz did not probe their defence enough to truly test it regardless.

Ultimately, Leipzig put in the better performance in this game, and they can be considered the deserved winners of this tie, with xG backing up this statement by valuing each sides chance 3.63-0.98 respectively.

Nagelsmann can be very happy with a great performance and three points to start the Bundesliga season. It looks like their deal for Alexander Sørloth is going to fall through, but Hwang Hee-Chan showed enough promise off the bench, and he has the Red Bull education at Salzburg as well, making him a valuable option to play upfront.

Beierlorzer can be bitterly disappointed with his side’s display in this match, as his press was easily bypassed by Leipzig’s players. With no signs of any further recruitment, Mainz will have to rely on some of their greater talents to develop into Bundesliga level players and win them enough points to improve upon last season. Burkardt looked decent as a creative outlet here, for example, and this is what Mainz will hopefully see more of this season.