After a successful mid-table finish in their first-ever Bundesliga campaign, Union Berlin are looking to reinforce their squad for the upcoming season. A key figure among the reinforcements is Max Kruse who returns to the Bundesliga from his year away in Turkey with Fenerbahçe.

Max Kruse is a second striker who was a vital force behind Florian Kohfeldt’s successful run with Werder Bremen in 2018/19 and with Alexander Nouri in the previous season. Although he is past his prime at 32 years of age to expect a great deal of work rate in the midfield, his intelligence in positioning and key passing ability makes him a threat to any defence. But for a forward, his goal records and xG stats aren’t flattering, so how can he contribute to Union Berlin’s attack in the upcoming season? In this scout report, I provide a tactical analysis of the forward. I will also review Urs Fisher’s tactics in an analysis of Union Berlin’s game model and predict how Max Kruse will fit into their system.

The 32-year-old left-footed German veteran from Hamburg was scouted by Werder Bremen in 2006 and spent the final years of his youth there before moving to FC St. Pauli. After journeyman roles at Borussia Mönchengladbach and Wolfsburg, Max Kruse returned to Bremen in 2016 where he gradually earned a place as a regular. After Florian Kohfeldt was appointed the manager, Kruse was chosen as captain for the 2018-19 season. Kruse was a member of the Germany U-19 that competed at the 2007 UEFA U-19 Championship and also featured for the under-21 team.

At Fenerbahçe, he was used as an attacking midfielder behind the striker Vedat Muriqi in a 4-2-3-1 system. Before that, at Bremen he played as a winger under Nouri in a 4-3-3 and with Kohfelt he was either deployed as a forward or an attacking midfielder in the 4-3-1-2 system. Below we see his season heatmap with Fenerbahçe, and we can see that he likes to be positioned on the left side and the left half-space, although as a playmaker he is capable of drifting anywhere on the pitch to pick up the ball.

Technically he is an unorthodox player, especially with his passing and relies on intelligent movement to create plays in front of the opposition defence.  He thrives in attacking transitions and is able to read the game two steps ahead of the rest which is a key part of his playmaking ability. He has often played with teams that rely on high pressing from the top, and quick transitions after winning the ball. 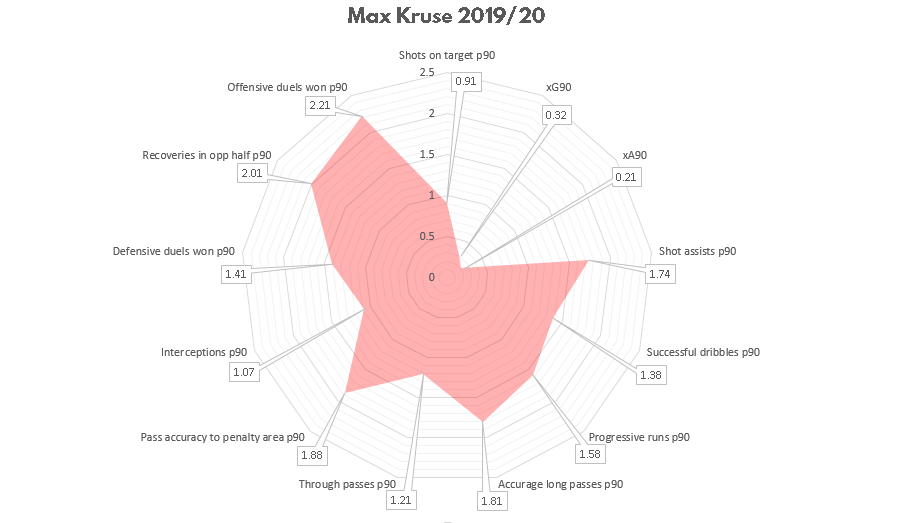 Looking at his statistics above, we can see that with an xG90 of 0.32 and an xA90 of 0.21, Kruse is not relied upon for his goal-scoring ability. Instead, much of his work comes from creating chances that lead to goal scoring opportunities. He averages 1.21 through passes per 90 with 1.88 accurate passes per 90 into the penalty box. He also makes 2.01 recoveries in the opposition half. He also has a decent record of duels won.

Kruse likes to receive the ball in the space right in front of the defence from where he can create a dangerous situation with a dribble or a through pass. He often positions himself with good distance from the last defender or the defensive line. Below we can see an instance where Kruse is positioned at least eight metres from the right-back while the play is developing from the opposite flank. While the defenders are engaged with the immediate threats like the strikers or midfielders attacking the box, Kruse is able to make space for himself and time his run into a good position. 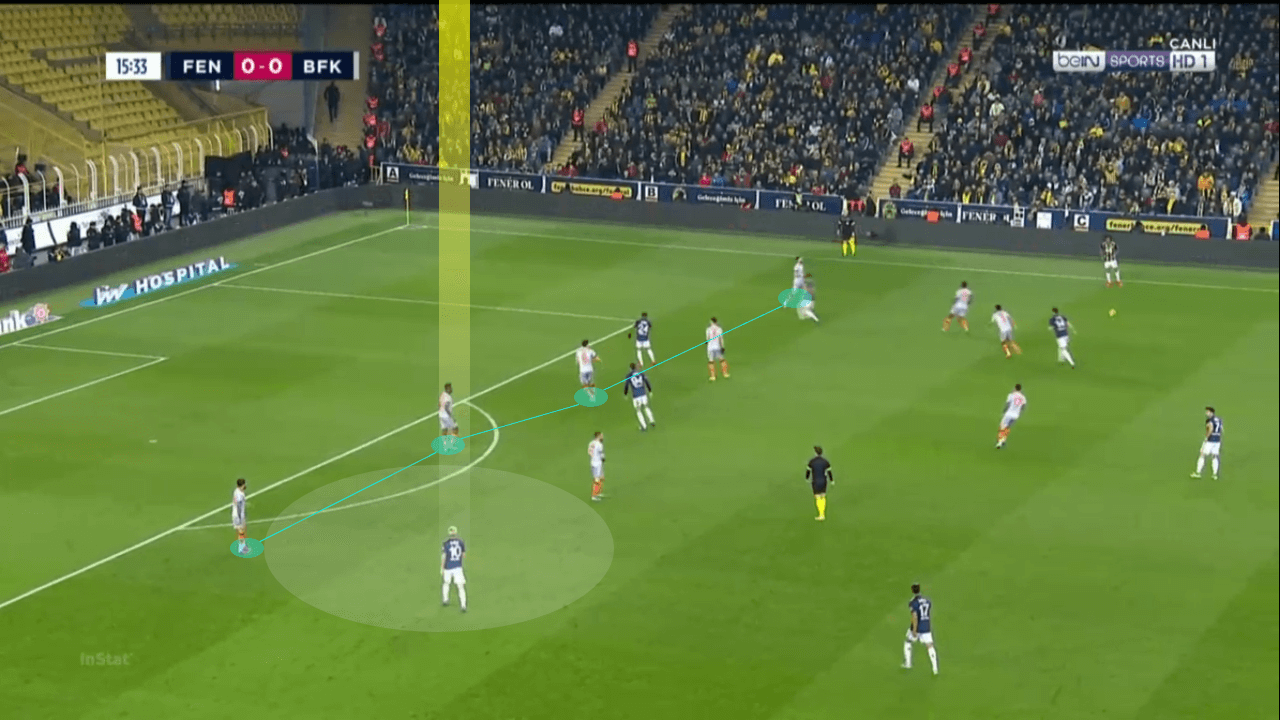 Kruse often makes runs in the opposite momentum of the defenders. This makes him incredibly difficult to read unless he is man-marked. While the defence is moving across together following the ball, Kruse runs against the flow, thus always managing to make space for himself. 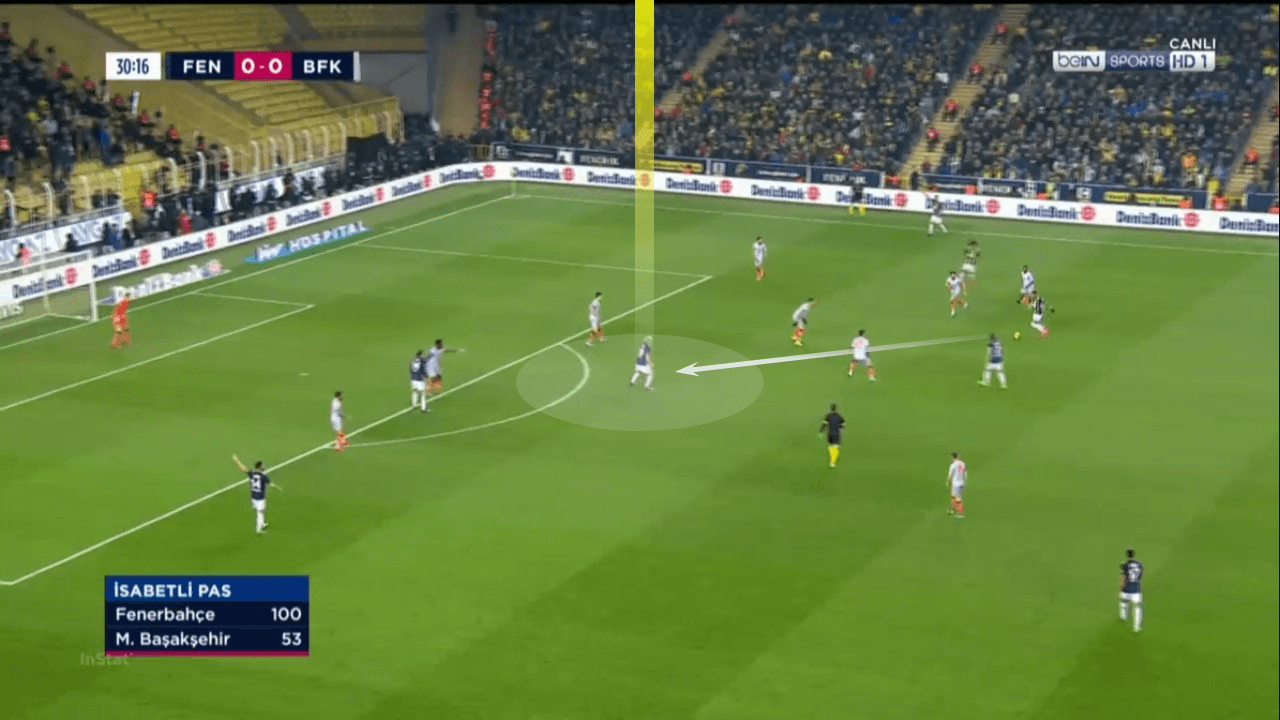 Above we take an instance where the midfielder from the right dribbles inside looking for a pass. Kruse is positioned in the space in front of the defence. We can see the striker pinning back the two central defenders. One of the central defenders who is occupied with the centre forward signals his teammate that Kruse is free. By positioning himself between the lines, Kruse is able to receive a pass that breaks a line of pressure from deep. 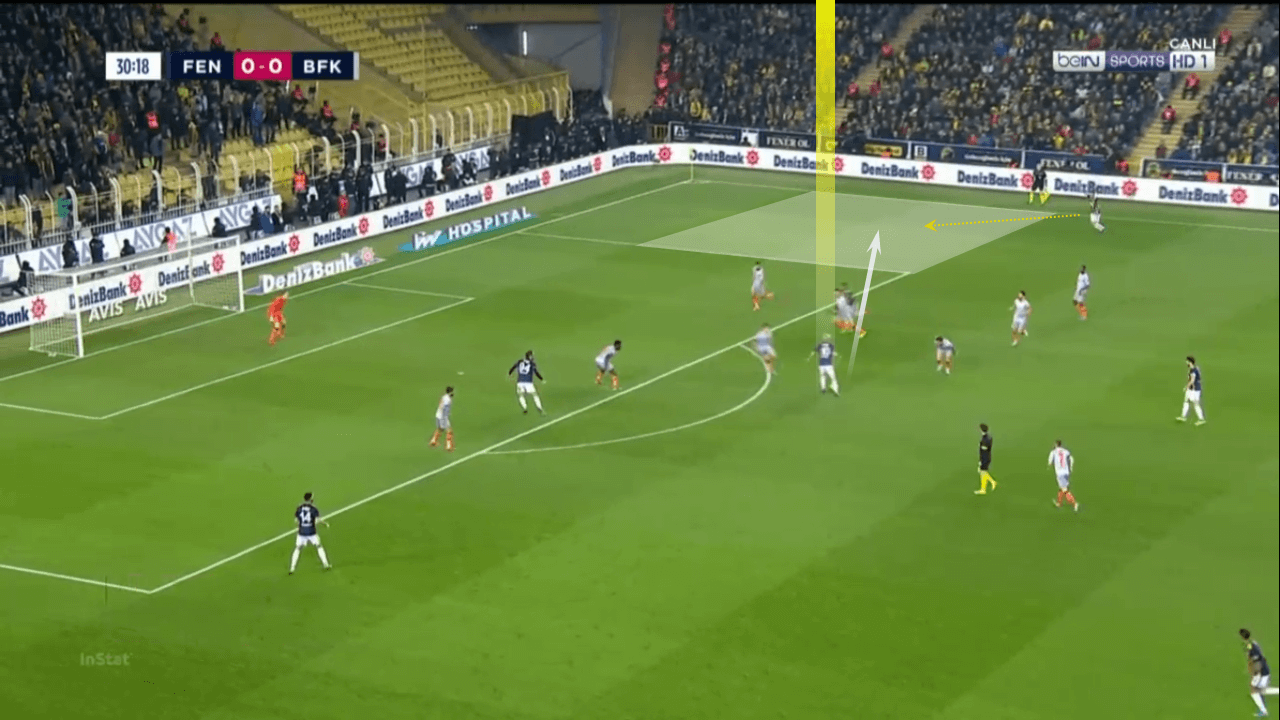 In the next frame, we see that he takes a touch and plays the ball out wide. Once again it is his ability to read the passage of play so well that he takes a ‘pause’ and waits for the field to shift opening the passing line for him out wide. With his positioning and body profile, he is able to trick the defenders into thinking that he might attack the box, but instead he finds a free passing lane to the wide player. 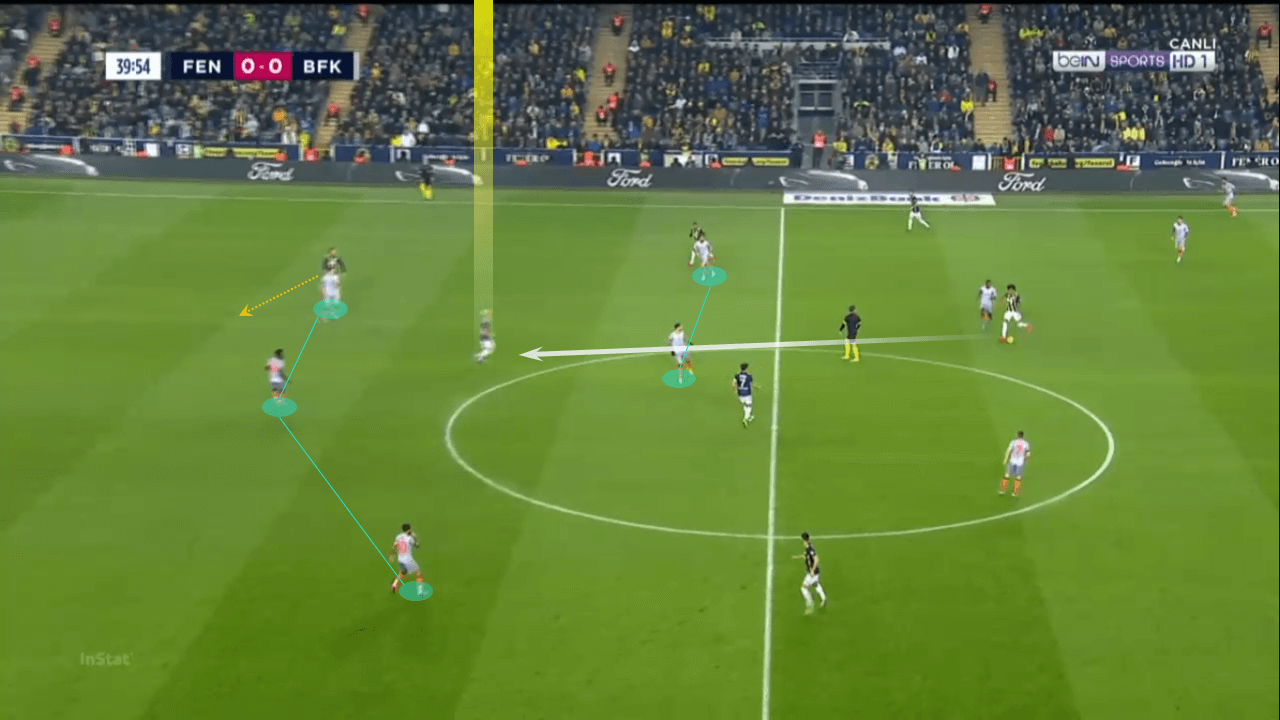 We see another instance, this time in the middle third of the pitch where Kruse is positioned between the lines of pressure and is able to receive the ball unmarked. It is very important for his forward to engage the defenders to make space for Kruse to receive the ball. It is harder if Kruse is the highest player on the pitch, which is why he is mostly used as a second striker or a CAM behind the centre forward.

Kruse’s poker-playing adroitness is evident in his perception of space and utilisation of his teammates on the pitch. He often plays passes to his teammates, just so that he can get into a better position to receive it back again. Let’s look at a scenario below where Kruse drops deep from his forward position. 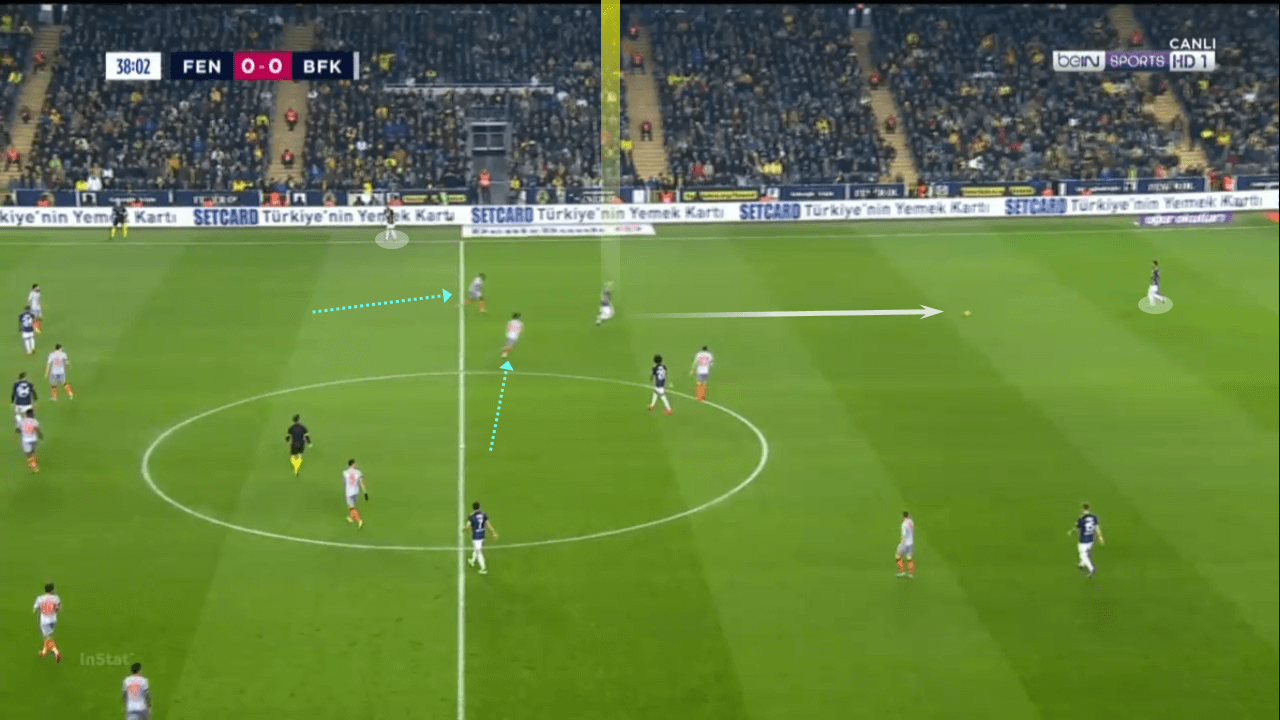 In the graphic above we see that he plays a pass back to his central defender while there is pressure from behind. We also see the right back positioned wide as an option to the defender. 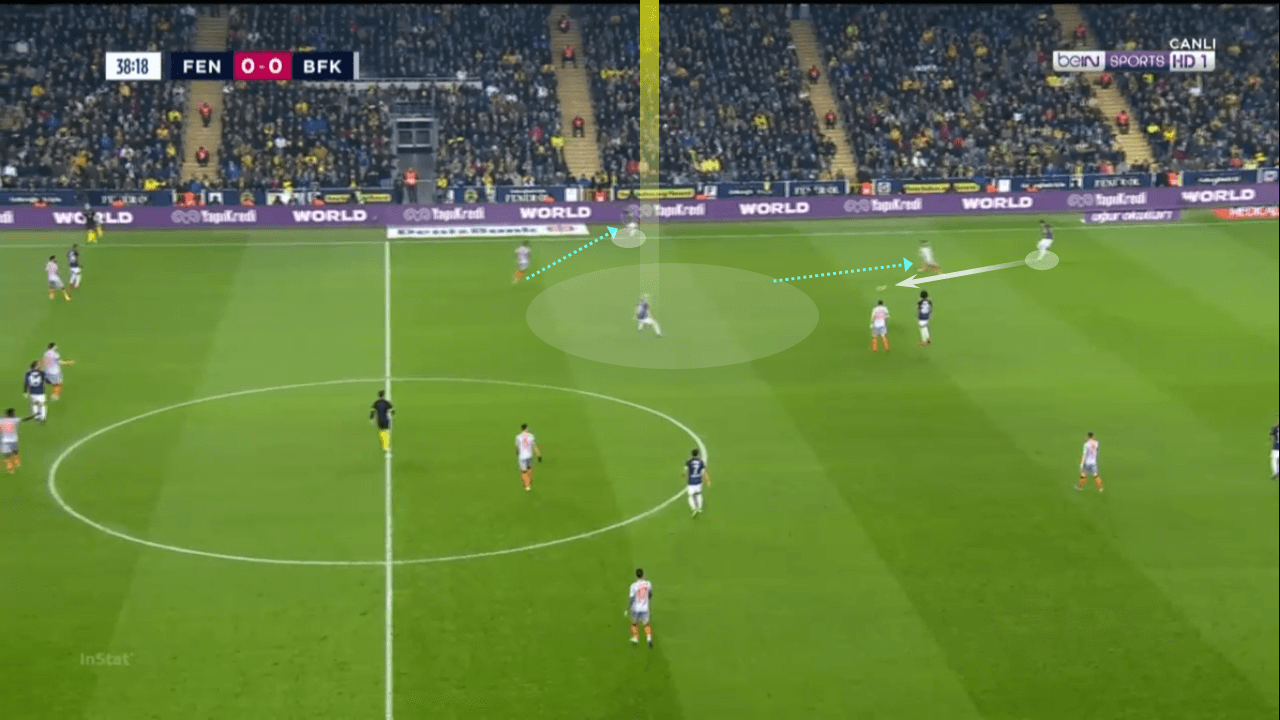 After playing the ball, Kruse anticipates the pressing behaviour of the opponents and stays still in his position while the right back drops deeper to receive the pass from the centreback. The opponents press the right back and the central defender leaving Kruse open to receive the pass back again. Kruse now receives the pass with his back foot, opens and turns at the opposition defence having eliminated two players. 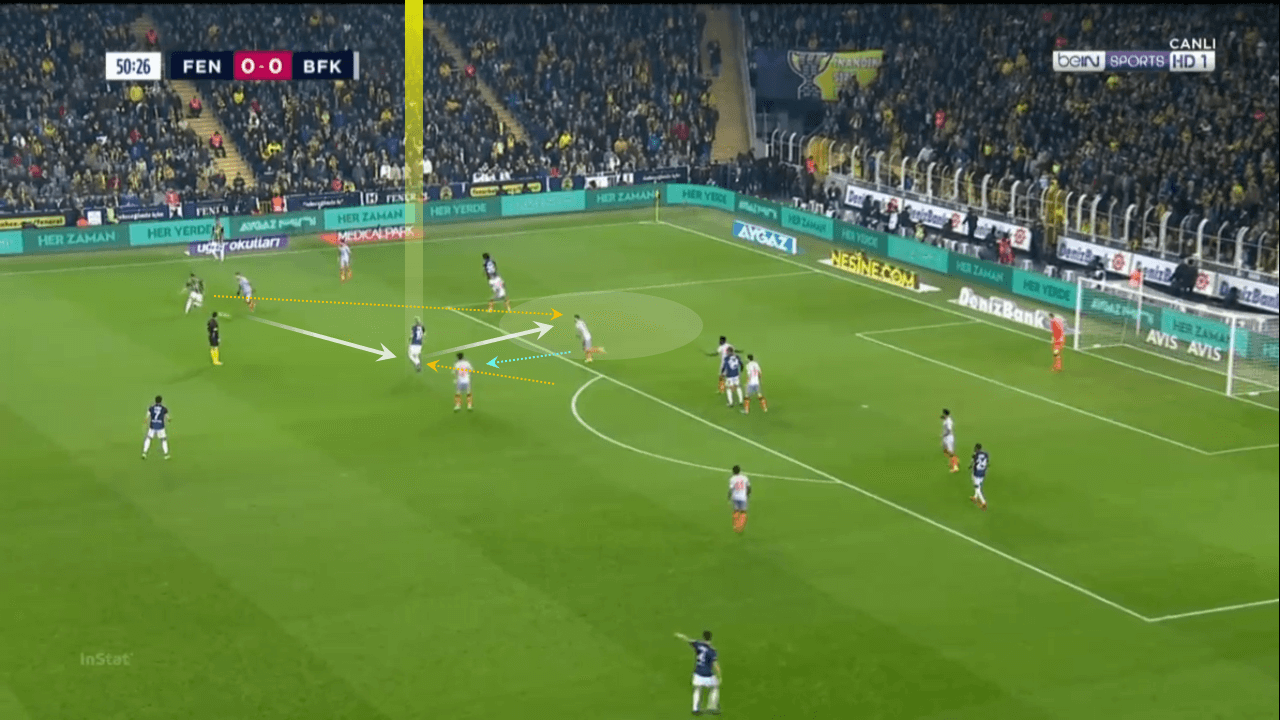 Let’s take another scenario in the final third. On the left, his teammate cuts inside with the ball. Kruse drops towards his teammate. This attracts the defender towards him. When the defender presses Kruse, he leaves space behind him. Kruse is able to play a simple wall-pass for his teammate to attack the space that the defender has left. In this particular game, Kruse played four key passes out of 63 total passes. 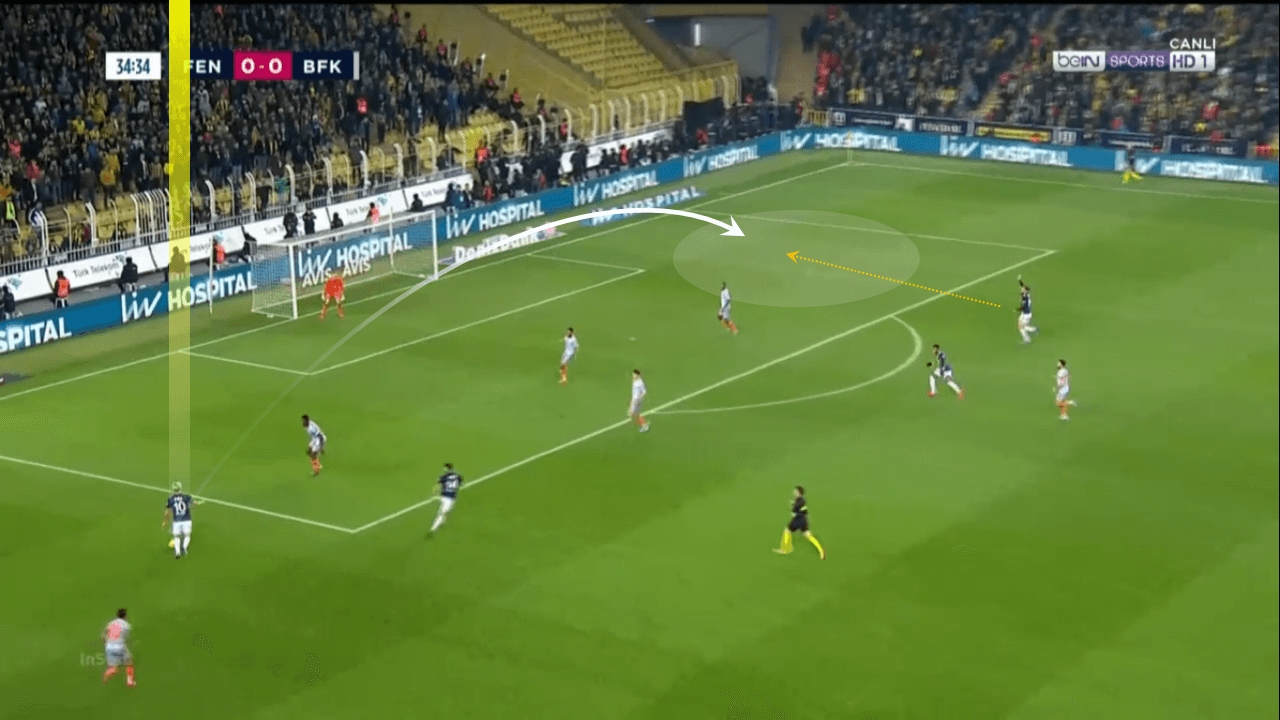 From the left, Kruse is also able to deliver quality crosses into the box with his left foot. He averages 2.14 crosses per 90. Below we see how Kruse is able to pick out his teammate on the far side and deliver a cross that curls into his path beyond the opposition left back and set him up in a good position in front of goal.

During this game, Kruse’s touches on the ball were mostly focussed in the left wing and the left half space around the final third. This is pretty similar to his season heatmap. His preference is attributed to his strengths with his left foot from this part of the pitch.

Kruse is neither a prolific goal scorer nor a poacher in the box, but the goals that he scores are spectacular especially because of how he makes space to create those goals. He often relies on the movement of other players to draw defenders out of position to create goal scoring opportunities for himself. 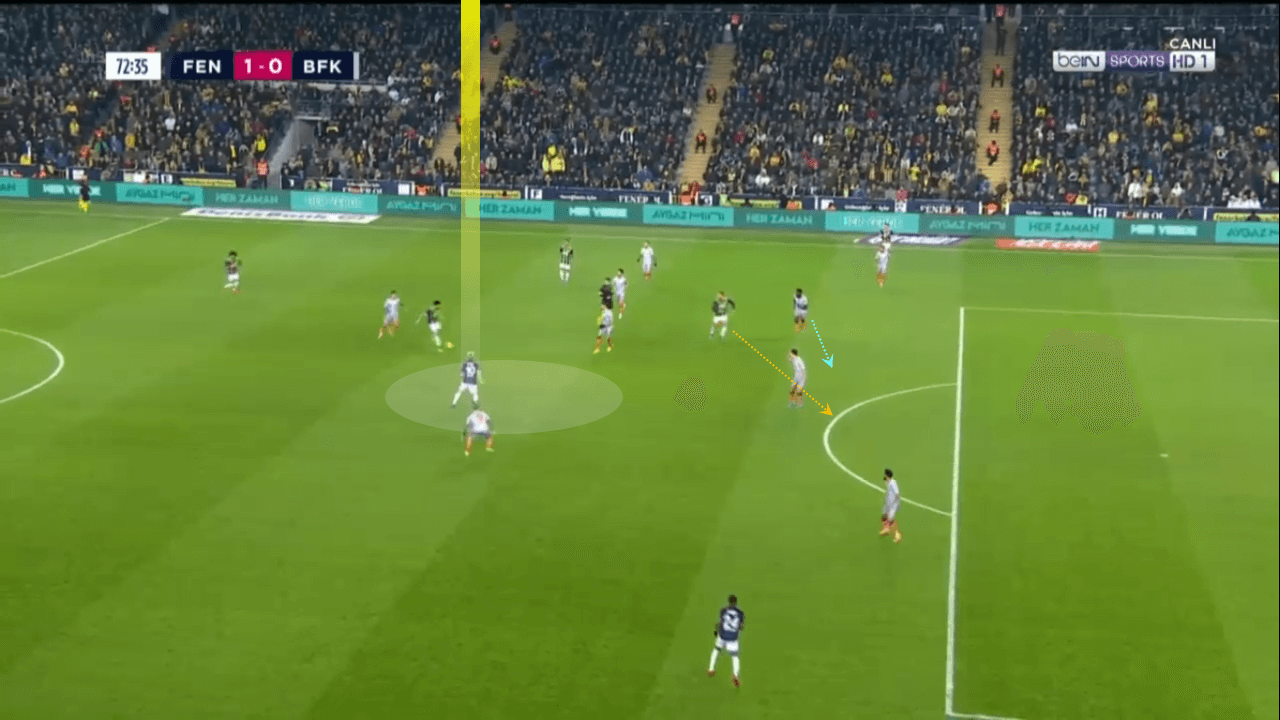 In this goal that he scored against Istanbul Basaksehir, he is once again positioned in the space in front of the defence in an attacking transition. This position works best for Kruse since the opposition defence is always in a dilemma whether to sacrifice their defensive discipline and press him risking leaving space behind them. The striker makes a run diagonally across the defensive line drawing a marker with him. 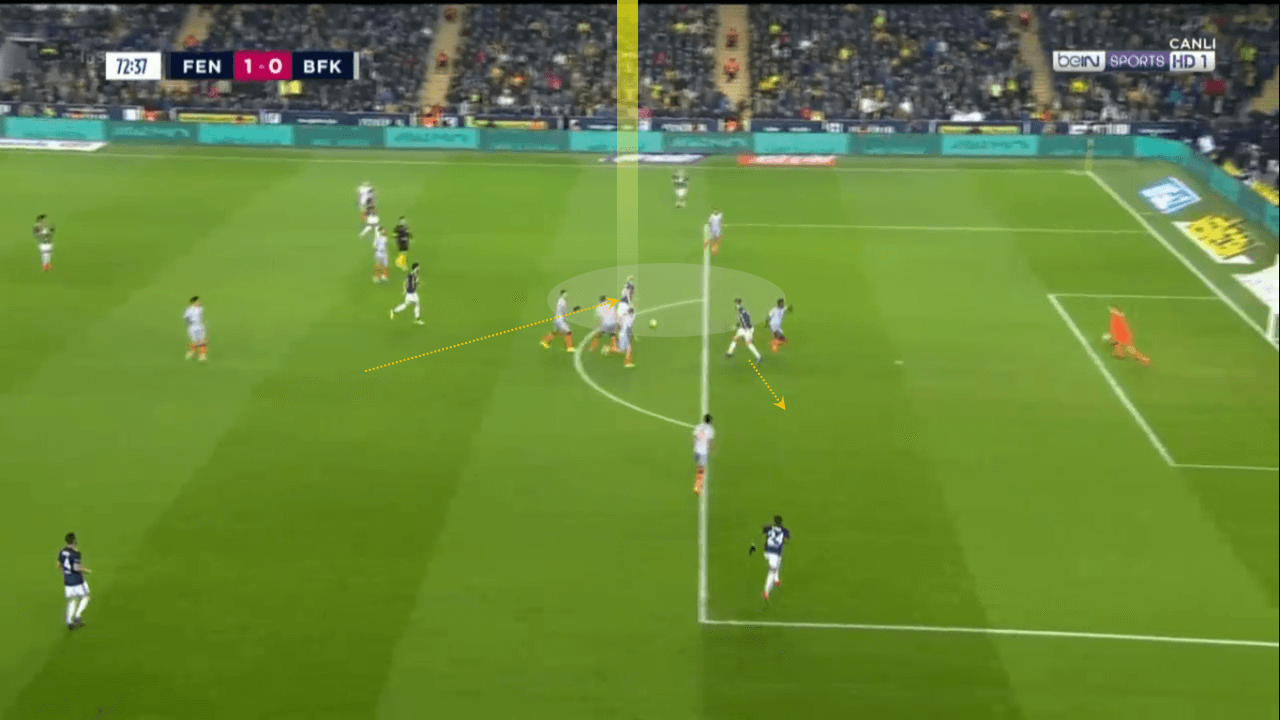 Kruse takes a touch and then bursts with a change of direction into the space that the centre forward created with his diagonal movement. The defenders are not quick enough to adapt and Kruse is well positioned to take a shot at the far post with his left foot which he manages to score.

How will he fit at Union Berlin?

Urs Fischer’s game model at Union Berlin was a defensive set up designed to quickly transition into attack with organised press from the front. He mostly set his team up in a 5-4-1 with wingbacks that could transition and make it a 3-4-3. Union Berlin were highest in terms of interceptions last season averaging 49.06 interceptions per 90 minutes.

We could expect Kruse to play as one of the three forwards in a 5-2-3 system, especially the left forward, from where he can create chances. With a system that works on winning interceptions and duels, the defenders and midfielders can look to count on a player like Kruse to create chances in quick transitions. 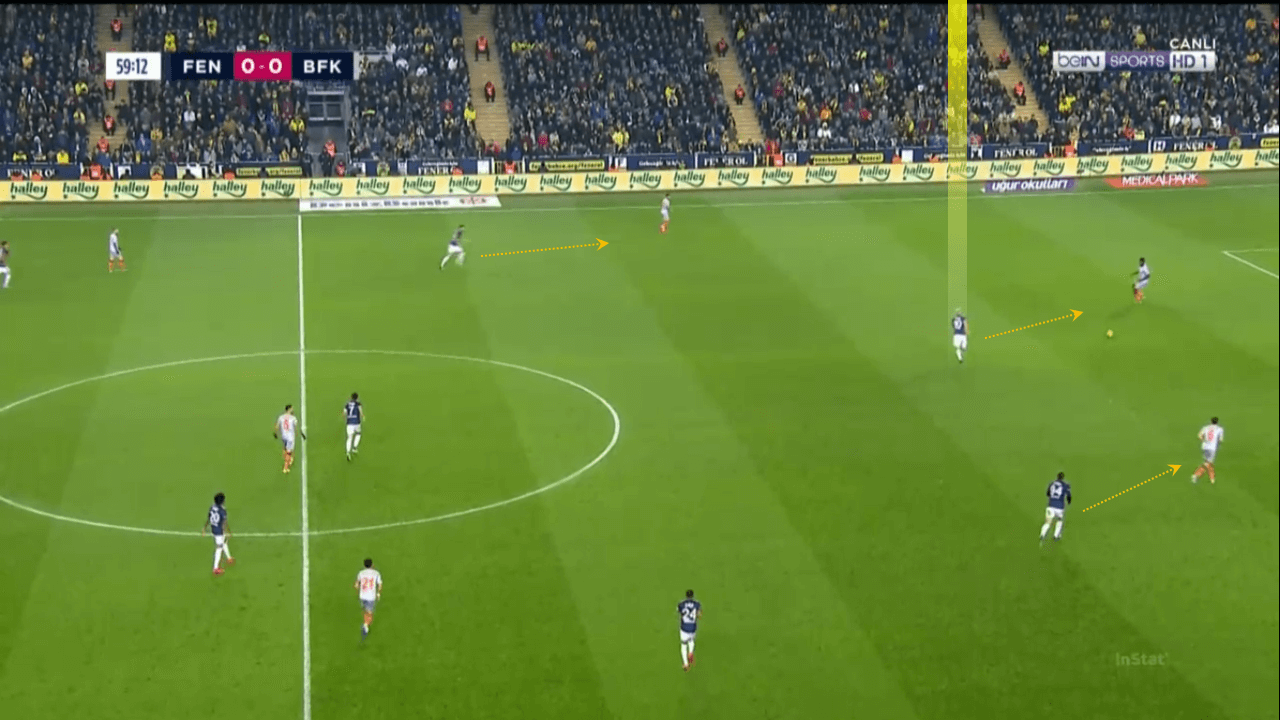 His role at Fenerbahçe also involved a lot of high pressing from the front which is synonymous to Fischer’s style of play at Union Berlin. In a 5-2-3 system he can rely on the wingbacks to aggressively push forward when the ball is on one side of the pitch and look to transition in case of a turnover.

Kruse has been one of the older signings for the Bundesliga side in this transfer window. We can expect him to bring his experience and creativity in reading the game to this side. With a hard-working structure behind him, Kruse can look to capitalise on opportunities from the front.

It will take some time to get used to the rhythm and pace of the Bundesliga, coming back from the Turkish league but Kruse is a player who stands out because of his intelligence. The expectations are that he will have a similar impact in Berlin that he had in Bremen two season ago. He will no doubt bring a fresh breath to Fischer’s side that held a lot of promise last season with their tactical discipline.