England followed up their slender win over Iceland by playing out a drab goalless draw in Denmark. It was a game of few chances, which the Danes edged, creating most of the opportunities in this Nations League contest. Kasper Dolberg saw his effort saved at the near post by Jordan Pickford in the first half, and Christian Eriksen blazed a good chance over the bar after the interval. England’s only real chance came in stoppage time at the end of the second half. Harry Kane touched the ball round Kasper Schmeichel, only for his goalbound effort to be cleared off the line by Mathias Jorgenson.

England had 54% of possession, but they only managed 0.61 xG. The combined xG for this clash was 1.18, and there were only four shots on target throughout the whole game. 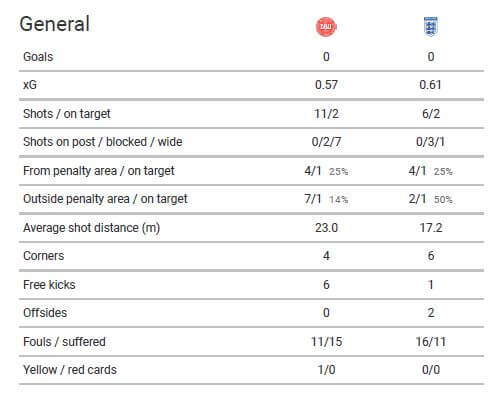 This tactical analysis will look at the reasons why the contest was so uneventful, with a particular focus on England’s struggles during the build-up phase. 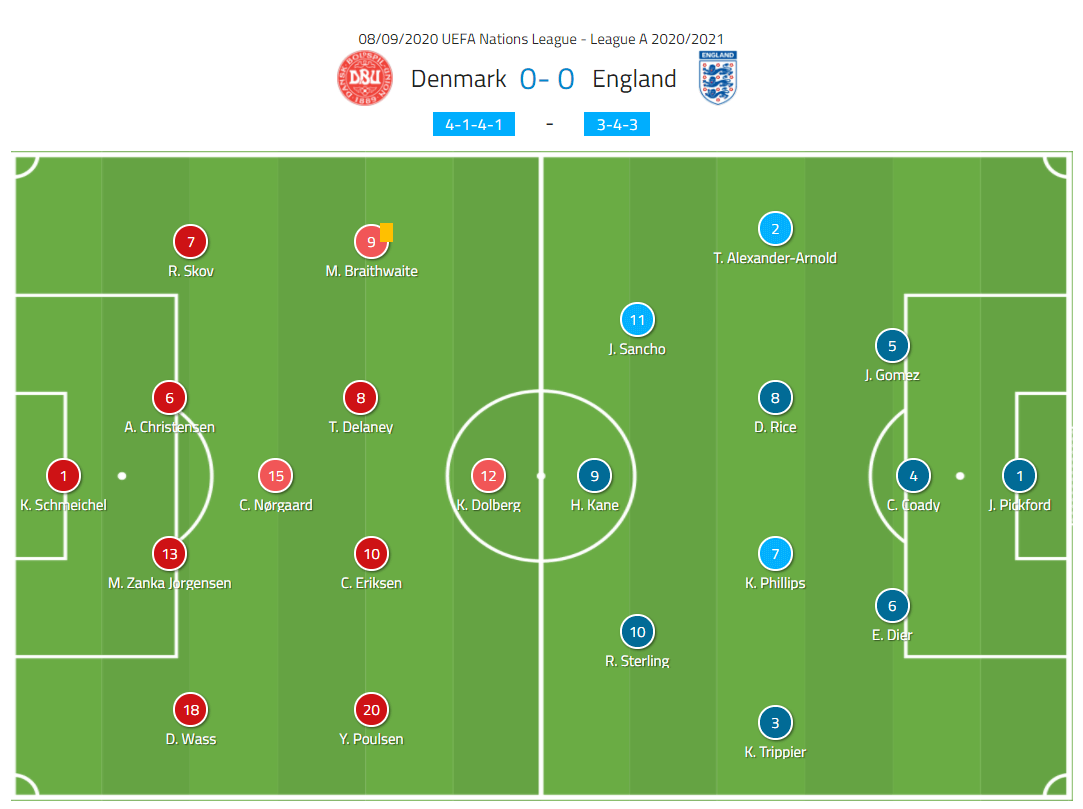 Gareth Southgate changed his tactics for England’s second match of their Nations League campaign. The Three Lions played a back three in the 2018 World Cup, reverting to this for the first time since their first-ever Nations League clash: a 2-1 defeat to Spain in September 2018. However, this time, England went with a 3-4-3. Jordan Pickford retained his place in goal. Eric Dier played on the left of the back three, alongside debutant Conor Coady and Liverpool’s Joe Gomez. There was a place for Leeds United midfielder Kalvin Phillips, who made his international debut alongside Declan Rice. Trent Alexander-Arnold started at right wing-back, with Kieran Trippier playing in an unfamiliar role on the left side. Jadon Sancho and Raheem Sterling were the wingers, supporting captain Harry Kane.

A glaring omission from the England line-up was the complete absence of any left-footed player in the whole team, aside from goalkeeper Jordan Pickford. Even all three substitutes were right-footed players. Eric Dier played as the left centre back, Kieran Trippier was at left wing-back, and Raheem Sterling played off the left as an inside forward. This meant that, when England worked the ball over to the left side, they naturally came back inside. Therefore, they spent a lot of time passing the ball around the back three without progressing it forward.

First of all, we’ll look at an example of Trippier’s right-footedness stopping England from progressing the ball. In the image below, he receives the ball deep in his own half in the left-back position. 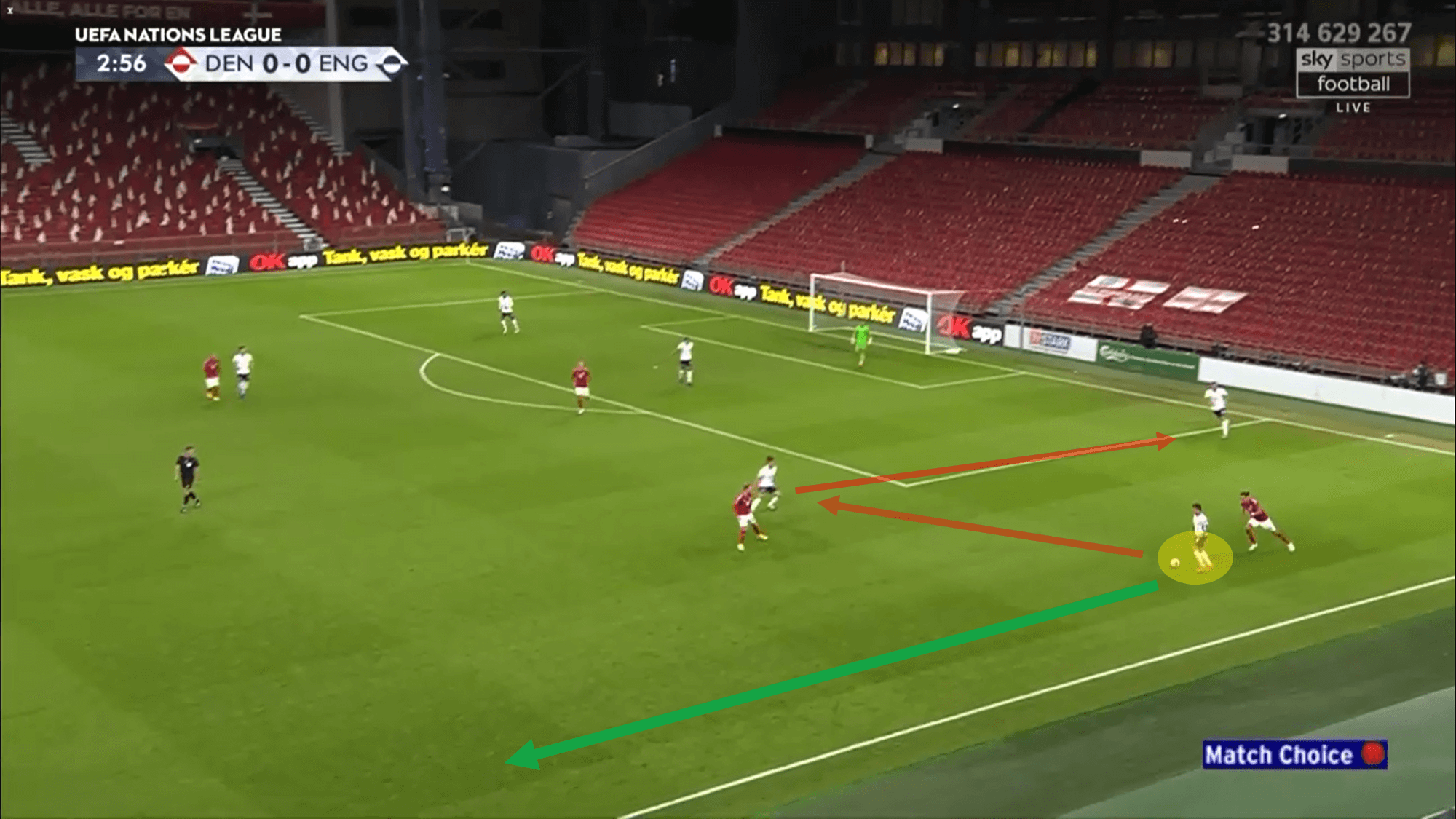 In this situation, a left-footed player is likely to attack the space in front of him by dribbling into it. However, Trippier doesn’t feel comfortable taking the ball on the outside on his left foot, so he naturally comes inside and passes it to Kalvin Phillips. The Leeds midfielder receives the ball sideways on, under pressure from Eriksen, so he ends up passing the ball back to Dier. In that situation, instead of potentially progressing the ball forward down the left flank, England ended up working it back to a central defender who was stood just yards away from the byline.

Now we’ll look at an example of England’s struggles without a left-footed central defender. In the image below, Eric Dier plays a pass with his right foot out to Trippier (blue arrow). 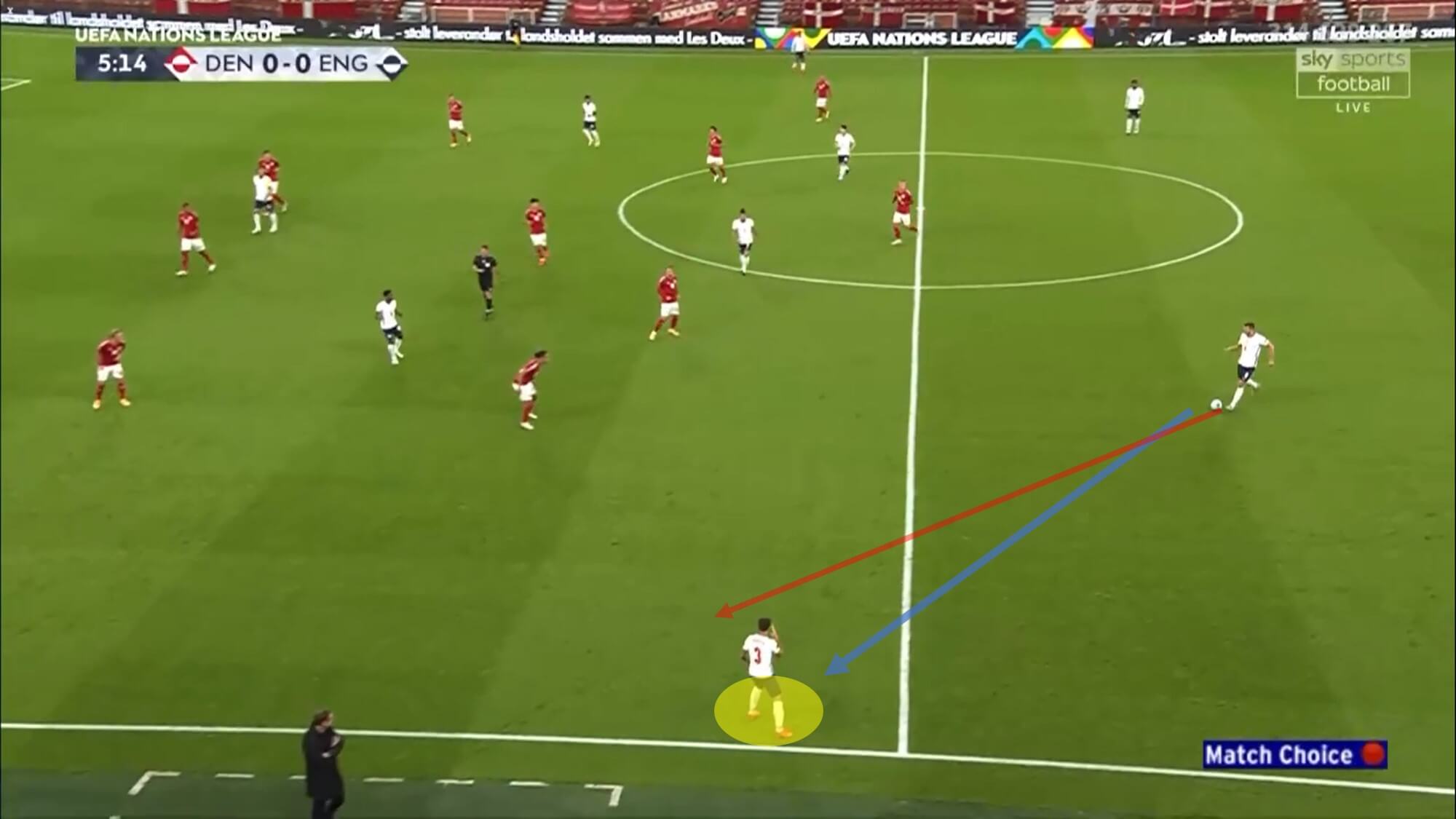 As he’s opted to go with his right foot, the natural trajectory of the ball is curving inwards towards Trippier. If a left-footed player had made that pass, the ball would be curving slightly away from Trippier, so he could take the ball in his stride, on the outside, with one touch (red arrow). However, instead, he has to come inside to control the ball first. 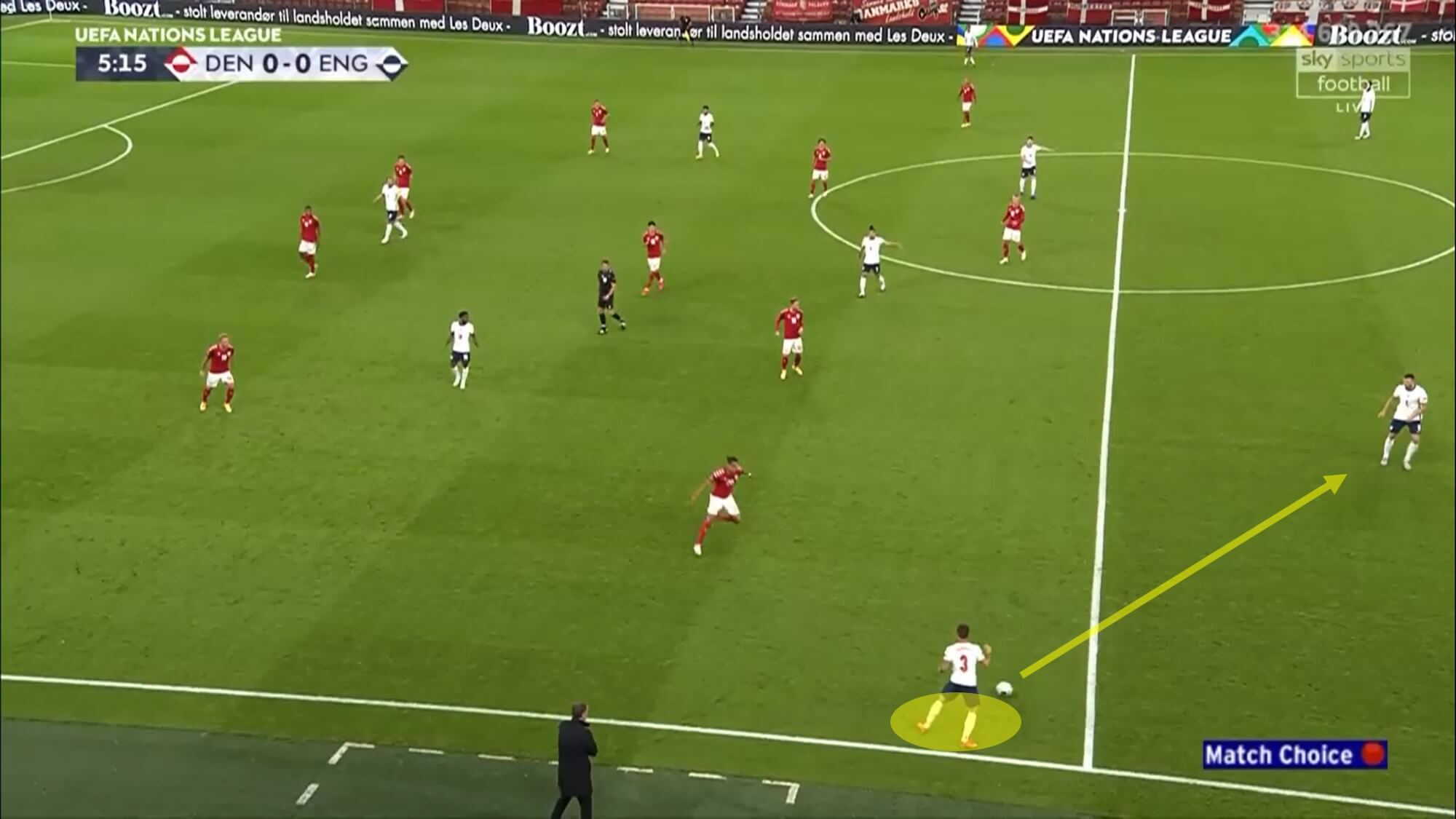 By taking this touch, he slows the attack down. That gives an extra split second to Yussef Poulsen to get back and block the more progressive passing lane, which forces Trippier to play the ball back inside.

Of course, England’s problems in the build-up phase weren’t all caused by their lack of right-footed players. Their Danish counterparts defended excellently and resolutely all game. The analysis will now concentrate on their defensive shape, and how England struggled to break them down.

Denmark knew that the Three Lions didn’t have an outfield left-footed player. Therefore, they often forced England to play down the left side. When the away side attempted to build play down their right flank, Denmark got plenty of bodies across to outnumber the England players and block passing lanes down the right flank.

On paper, England should have been more threatening down the right, with the potential of Trent Alexander-Arnold and Jadon Sancho, and, although they had more attacks down that side (11), those attacks only made up 16% of their total xG. 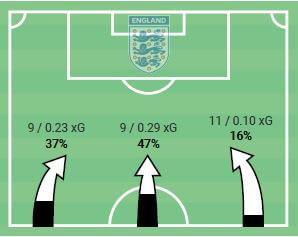 This shows that, although England tried accessing attacks down the right-wing, Denmark managed to stop the danger. The image below is an example of this, as Gareth Southgate’s side are attempting to build an attack down the right side. 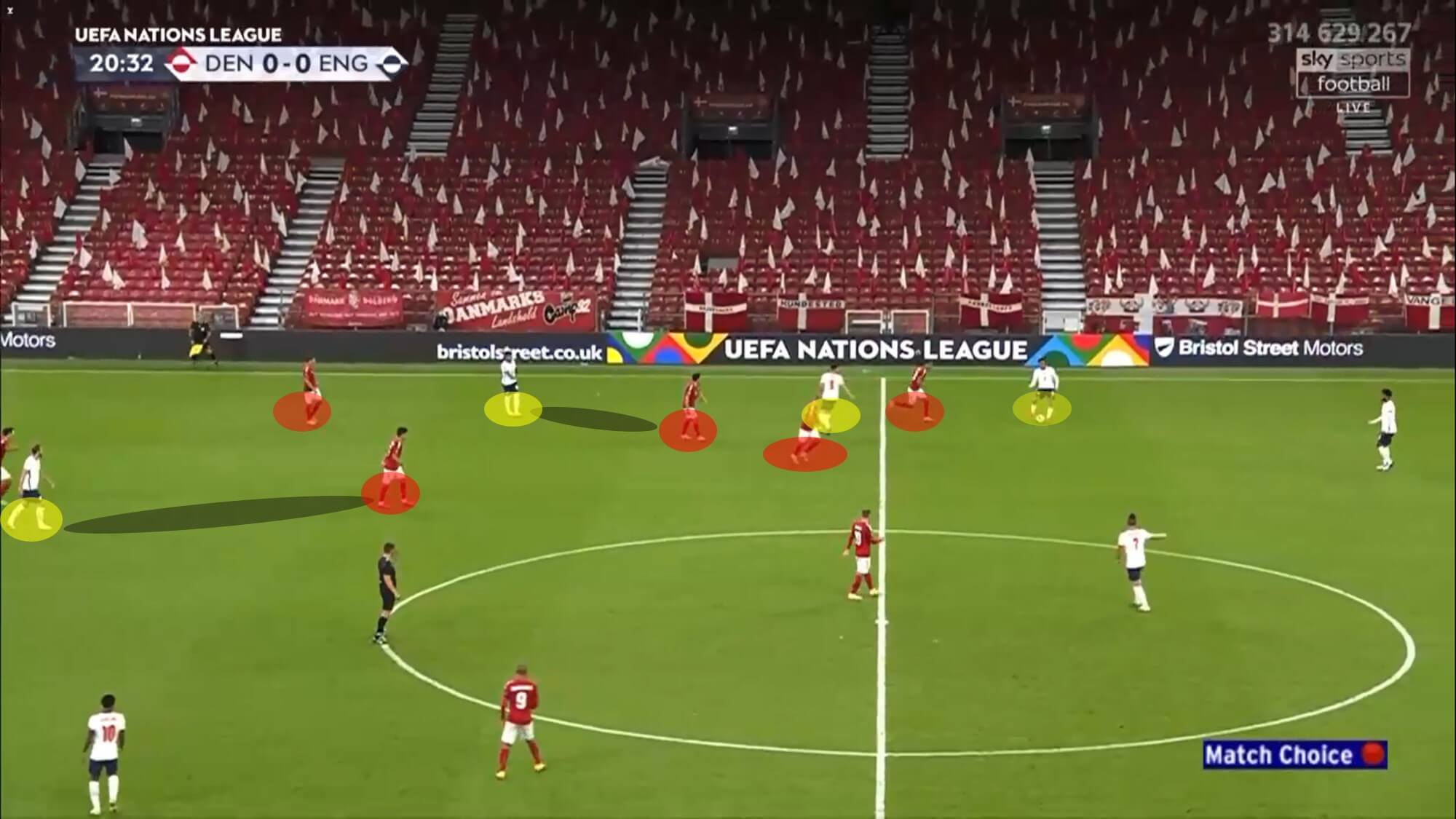 But Denmark were very quick at blocking England’s avenues in these areas, getting plenty of bodies across to outnumber them. Striker Kasper Dolberg often dropped back into his own half to get close to England’s midfielders, and, on this occasion, he pushes across to England’s right-sided central midfielder Declan Rice. Rice is also blocked off by Denmark’s left-winger Martin Braithwaite, who is pressing Alexander-Arnold, with Rice in his cover shadow. Central midfielder Thomas Delaney pushed across to block the passing lane into Sancho, and defensive midfielder Christian Norgaard has striker Harry Kane in his cover shadow. Because the Danes managed to outnumber England and block progressive passing options, the Three Lions were forced to go back inside and work the ball towards the left. This didn’t suit England, as we covered.

Denmark generally played with a midblock out of possession. They did choose certain moments to go and press England, but they didn’t press aggressively throughout the 90 minutes at all. Instead, they were keener to block passing lanes, as we’ve just discussed. As well as stopping the danger down England’s right, they managed to make it very difficult for England to progress the ball through the centre, especially in the first half.

The hosts looked to form a midfield box to gain numerical superiority in that central area. In the image below, England’s central midfield pairing of Declan Rice and Kalvin Phillips can’t get free, because they’re outnumbered by five Danish players. 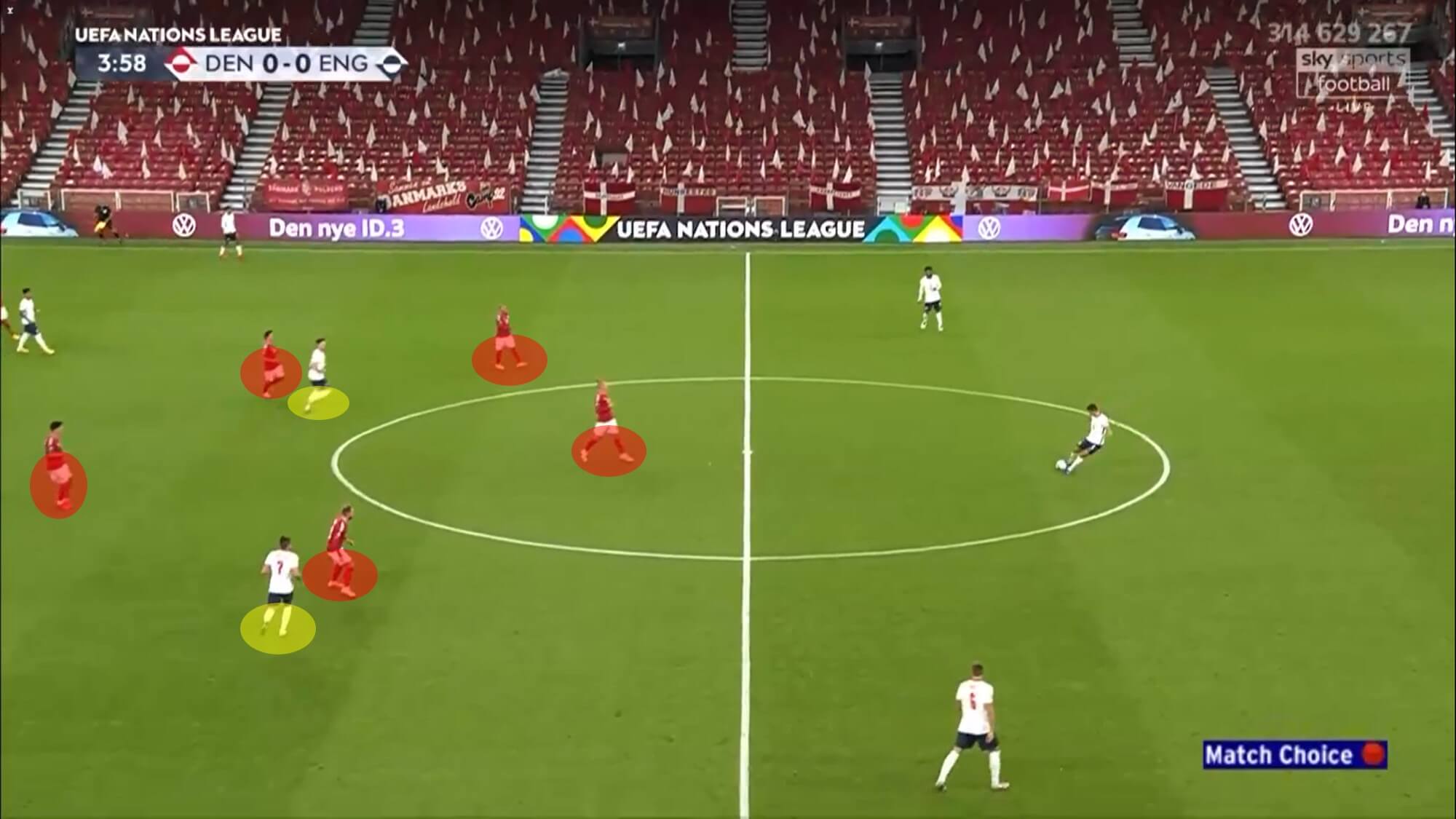 Dolberg drops behind the ball, and he’s blocking a more direct pass into Harry Kane, along with Christian Norgaard. Martin Braithwaite tucks in from the left to get closer to Rice, who is also being marked by Thomas Delaney. Eriksen and Delaney are closely marking the central midfielders, but they’ve also got England’s wingers in their cover shadow. This made it very difficult for England to break the lines with central passes. Playing two defensive-minded midfielders didn’t help, as they were static in the middle of the park, and they aren’t used to having the burden of creative responsibility placed on them.

England could have looked to play more forward-thinking midfielders in that area, with an emphasis on rotating positions with Sterling or Sancho to try and drag Denmark’s midfielders out of position. When Mason Mount came on after 60 minutes, the dynamic of the game started to change, with England created more chances as they injected more creativity into that area.

When Phillips and Rice were in possession, they were outnumbered and often didn’t have a progressive passing option available. 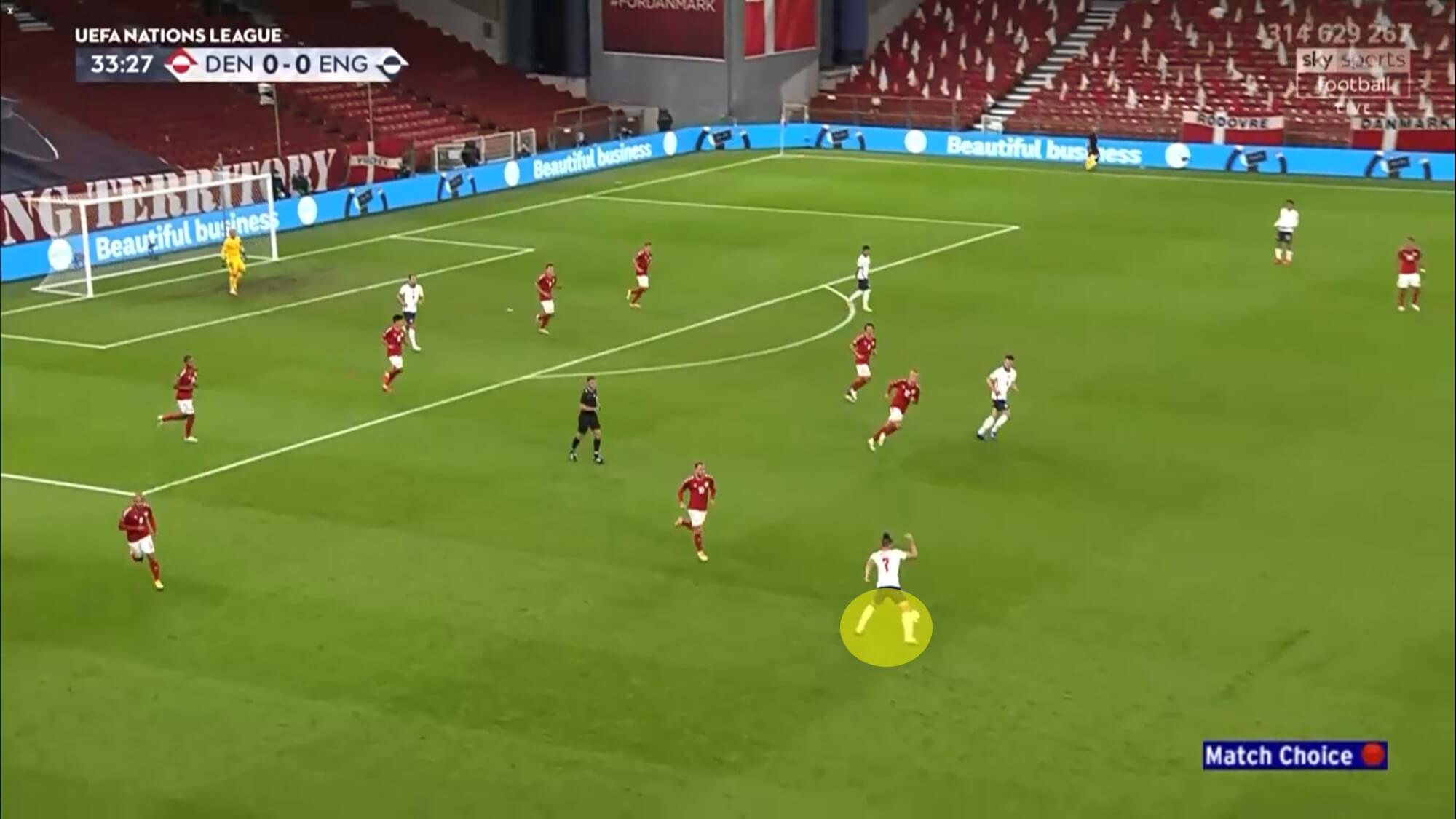 Denmark didn’t always play in a midblock though. They pressed aggressively in certain moments. The Danes tried stopping England from playing out from the back when they had goal kicks. Also, when England worked the ball back to Pickford, they often pressed him aggressively too. This press continued when Pickford worked the ball out to an English player in a very deep area. 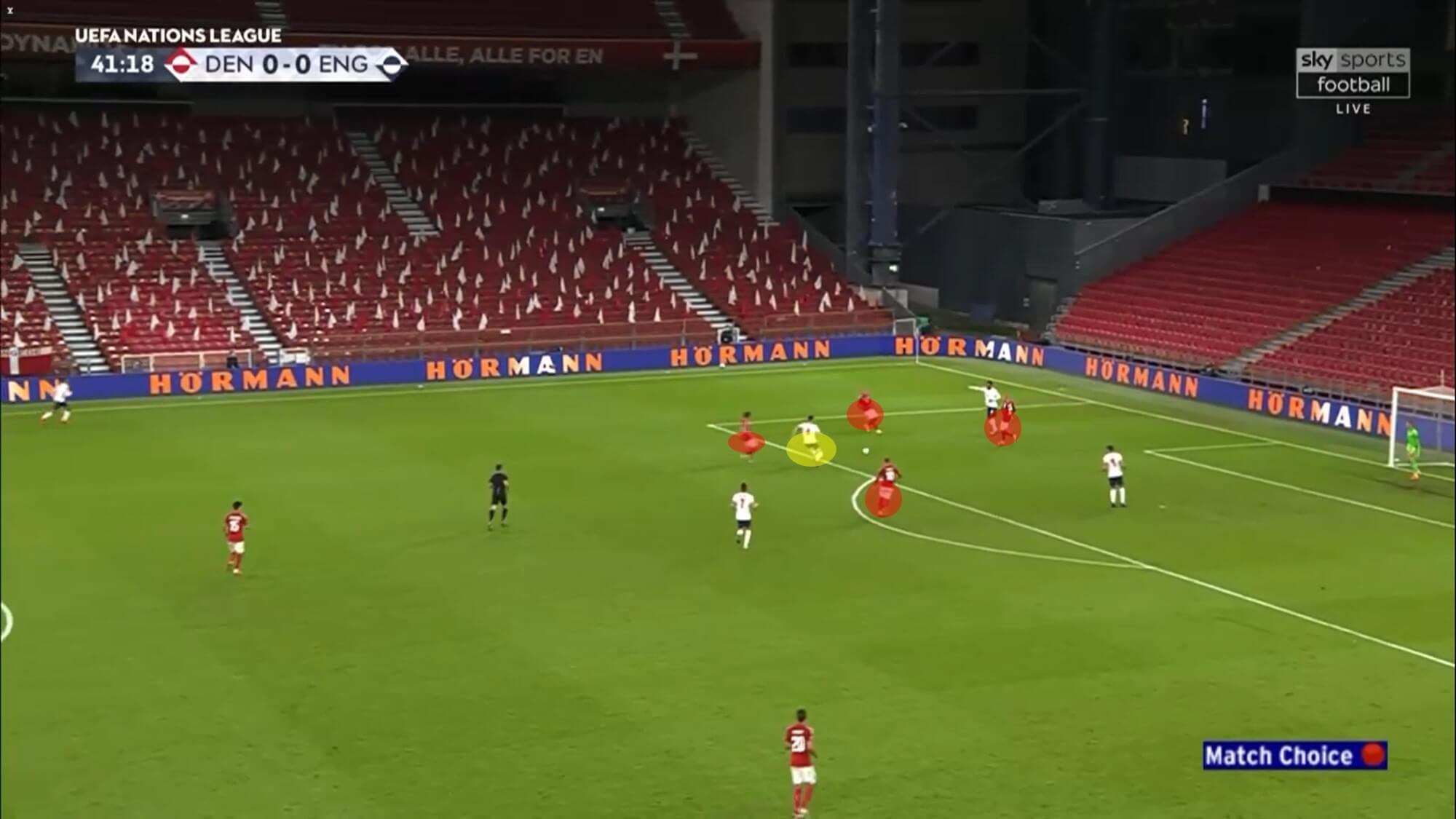 In the image above, Rice receives the ball in his own box on the half turn. There are four Denmark players around him. When the home team thought there was a chance to force a dangerous turnover, they weren’t afraid to hunt in packs. Denmark’s mixture of sitting back but pressing in certain moments was also a way of trying to catch England off guard. The visitors may have expected time on the ball, but would immediately have to rush when the home side initiated the high press.

Southgate picked an experimental lineup, with a system that very few players looked comfortable in. Rice and Phillips were constantly outnumbered in that midfield area, and England struggled to progress the ball because of that. The lineup felt far too cautious. Denmark are a very good team, but was there any need to select three central defenders and two defensive midfielders? It’s little wonder that England struggled for creativity when we think about it.

In truth, only debutant Conor Coady looked comfortable within that system. He plays in the middle of a back three for Wolverhampton Wanderers, and England did use his long-range passing ability to find Alexander-Arnold and Trippier in space a few times. Southgate certainly needs a plan B for major tournaments, but playing with two defensive midfielders in a 3-4-3 shouldn’t be it. Against the best nations, England will struggle to keep hold of the ball if they don’t play with three in the middle.

It’s four points from a possible six for Southgate’s side in the UEFA Nations League, but they’ll probably have to take four points off Belgium if they are to win their group.