Getting off to a late start to the La Liga season due to UEFA Champions League commitments in 2019/20, which ended in heartbreak against Bundesliga side RB Leipzig, Atlético Madrid kicked off their campaign against Granada on Sunday, and they did so in style.

Luis Suárez grabbed the headlines with a stunning debut, but João Félix and Diego Costa were among the other stars to shine, as Ángel Correo and Marcos Llorente joined that trio on the scoresheet, with a late consolation goal for Jorge Molina, his first in domestic competition since joining the Andalusian team. 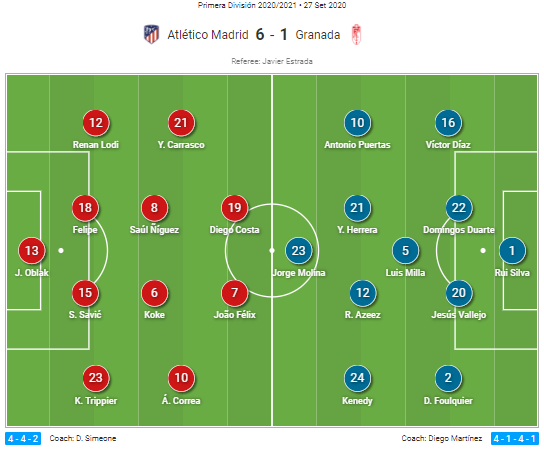 Atlético made three changes to the side that ended the 2019/20 season, with José María Giménez unavailable due to a positive test for Covid-19. Conversely, Correa returned having missed the end of last season, while Félix was selected ahead of Llorente from the start. New signing Suárez was forced to settle for a spot on the bench.

Granada made several changes as their rotations continued as they are involved in the Europa League. Víctor Díaz came into the side in place of Carlos Neva in defence, while the midfield and attack was refreshed with Maxime Gonalons and in-form duo Darwin Machís and Roberto Soldado swapping places with Ramón Azeez, Kenedy and Jorge Molina.

João Félix given the chance to shine

Last season, Félix was regularly criticised for lacking confidence and struggling to fit into the Simeone system, which was so structured and rigid. Stuck out wide or acting as an out-and-out centre forward, Félix was never really deployed in his natural position. Against Granada, he was given just that opportunity. Operating with greater freedom and confidence, Simeone looked to release him from his shackles and gave him more free reign, allowing him to float in between the lines and stick to central areas.

As can be seen here, when out of possession or at the start of a transition, Atlético would almost resemble a 4-1-4-1. Here, one central midfielder of Koke or Saúl would sit deep, protecting the defence and breaking up play. Félix would then drop off into the midfield, operating himself as a central midfielder. These kinds of defensive duties may not be a natural part of his game, but show his improvements from last season. Rather than tracking back out wide, he would float in central areas and look to break up play with his intelligent reading of the game, instead of getting stuck in. At times in 2019/20, he was guilty of diving into challenges in that role, but in a central area would not be required to dive in as much.

As soon as the ball moves on and Atleti begin an attack, the starlet would then look to break into the gap between Granada’s midfield and defence. It was such a move which led to Félix’s goal as he would look to occupy that space and then break forward at speed to exploit space. Defenders would be drawn into Costa’s physical presence in central areas, particularly when on the counter and he would make a smart run, and that would open up spaces in behind for Félix to take advantage of, arriving late into the box.

While Félix took care of the central areas, a substantial part of the attacking strategy from Atleti was to threaten by stretching the Granada defence. In total, 72% of positional attacks came from wide areas, and that was driven by Renan Lodi and Kieran Trippier in wide spaces. Up against Dimitri Foulquier and Díaz, Simeone knew that they would not have great pace to handle quick transitions and links in wide areas and so the approach was clearly to overwhelm them. As can be seen below, regularly both full-backs would push on.

This invited the wide players, Yannick Ferreira Carrasco and Correa, to move into more central areas, at times creating a four man attack. Lodi and Trippier would then occupy the wide areas to keep the full-backs pinned wide, while four runners would attack the two central defenders of Domingos Duarte and Jesús Vallejo, with Luis Milla dropping in to cover but trying to cover four attackers with just three defenders. Such outnumbering made it easier for Atlético to get on the end of aerial chances, with 70% of crosses finding a target in the final third for Atlético Madrid.

This approach also helped to tire Granada. Even at a most basic level, four of Atleti’s goals came in the final half an hour, and that was down to the way in which Atleti stretched the game. At no point did Simeone’s men allow them to sit into a deep, narrow block, with little pressing. By stretching, they would be left with no choice but to cover more ground so as to block the spaces opening up in their defensive unit. That meant that Granada paid the price late on, as Atlético brought on fresh legs to really punish the tired legs of a side who had played two league games and two European qualifiers, compared to this being Atleti’s first fixture of the season.

Simeone opted to change things up, as if to only torment the tired Granada defence, just after the 70-minute mark. Two of those introduced were Suárez and Llorente. In just 24 minutes, both players would register a goal and an assist, with Suárez scoring two. Already in their first outing together, they looked to form a formidable partnership which promises much for the rest of the season. This is key to Simeone getting the most out of 33-year-old Suárez, who lacks the mobility of David Villa at his age, despite the many comparisons between the two following the similarities in their moves to the Colchoneros.

Suárez registered 0.31 xA in this tie, and much of that came from his link-up play with Llorente. Typically, the Spaniard would be positioned in a deeper area, but when Atleti could not create space, Suárez would drop into a deeper area, level with Llorente. He would then look to hold his position, receive the ball and play a first touch pass into Llorente, who would use his explosive pace to run in behind to the space that Suárez had left in behind. Such movement and dropping into deep areas at the right time respects his relative lack of mobility which getting the best out of others.

Llorente’s athleticism means that when Suárez cannot make those runs, he will do the hard work for him and capitalise on Suárez’s reading of the game to anticipate such movement. Though, it is worth pointing out that his mobility is not as limited as many feared. With 0.87 xG, he would create some superb runs, dropping off full-backs at the far post to convert for his first goal, and looking a real menace, particularly in connection with Llorente. This may become more difficult when starting regularly and with games coming thick and fast, but striking up this relationship with Llorente will be essential to sustaining his fitness throughout the campaign.

What was perhaps most intriguing of all was the role of central midfielder Koke. In recent seasons, he has sat deeper and deeper, occupying a deep-lying playmaker style role for much of 2019/20, covering the gap in the squad which was rarely adequately, or more accurately, consistently, covered in a holding midfield role. In this opening encounter, Koke was deployed more as the offensive midfielder, with Saúl sitting into a deeper position and allowing Koke more freedom to roam into attacking areas.

That was evident in his passing. In total, he played 18.6 forward passes compared to 15.3 on average last season, with eight of those in the final third, compared to a season average of slightly lower at 7.34 in 2019/20. This more ambitious vision from the captain played a major role in Atleti having a more offensive threat to break Granada down. Against other sides, it may not be so simple, but Koke is clearly set for a different role in the year ahead as Simeone looked to freshen up his team’s attacking strategy.

Here, we can see how he capitalised on the relationship between Suárez and Llorente. At times, Suárez would drift wide, rather than deep, and Koke would look to break through the middle as a passing option. When this did not come off, his work was not done, and he could provide a link-up option for Suárez, as he used on this occasion. With Llorente’s flexibility, he can drop in to cover for the captain and can cover the central midfield role having played there for the vast majority of his career. This allowed Koke to effectively swap and take up a second striker role when appropriate, offering a huge degree of fluidity to the Atlético midfield and attack as they interchanged roles.

There can be no questioning that Atlético have not looked so fluid or threatening in attack for a very long time. With an xG of 3.60, Atlético have not recorded a higher figure in a LaLiga fixture since August 2016 in a game that ended in a 1-1 draw with Alavés. The freedom afforded to players like Félix and Koke allowed Atlético to exploit spaces in the Granada defence, especially as they tired later on in the tie. Continuing to maintain this throughout the rest of the campaign will be more challenging, but the diverse threats offered by the Costa-Félix and Suárez-Llorente duos meant that there is reason to be very hopeful as an Atlético Madrid fan. With threats coming from out wide, in the middle and on the shoulder of the last man, Simeone finally appears to have found a system to get the best out of the players available to him, and it is already reaping the rewards.