Due to the COVID 19 pandemic, last season the Belgian Pro League came to an early end. This conclusion had huge consequences on not only the final standings of the 2019/20 season but also the composition of the next one. The final decision meant that the Pro League would expand to 18 teams. Consequently, the first division B only existed out of six teams instead of the normal eight teams.

Eventually, it turned out that the reserves of Champions League qualifiers Club Brugge and Lierse Kempenzonen would step up to fill in the last two spots. The latter were almost relegated last season, but Lierse were one of the only with a licence thus they were given the place in the first division B.

With this in mind, the third matchday in the Belgian second division promised to be an interesting one. Lierse would make the away trip to Lommel SK as taken over by Manchester City due to financial problems. The two teams came into this game with totally different perspectives.

This tactical analysis will give an insight into the tactics used by both managers. The analysis will also clarify how both teams approached the game.

The former Premier League under 23’s manager Liam Manning chose to send his team out in a 4-2-3-1 formation. Tomas Švedkauskas started between the sticks. The defensive backline existed of Glenn Neven, Kevin Kis, Laurent Lemoine and Jonathan Hendrickx. In front of them the two pivots: Kolbeinn Þórðarson and Arno Verschueren. The flanks were occupied by Juan Cejas and Anass Zaroury. The number 10 was Manfred Ugalde. And lastly, Jordan Kadiri led the line for Lommel. 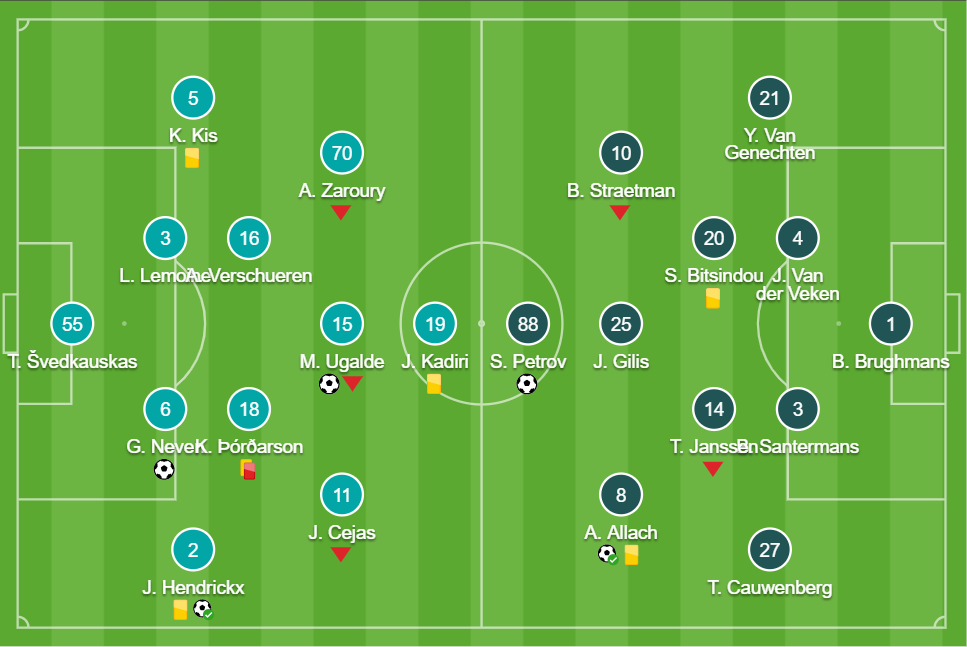 Tom Van Imschoot also chose to field his team in a 4-2-3-1, which during the game was often a 4-5-1 without possession. Bernd Brughmans started in goal for Lierse. Whilst the four defenders were Ben Santermans, Timo Cauwenberg, Jef Van der Veken, Yentl Van Genechten. The centre midfielders were Toon Janssen, Scott Bitsindou and Jo Gilis. The flanks were occupied by Ayyoub Allach and Bob Straetman. Sava Petrov started up top.

As discussed above Lommel have been fallen into the hands of Manchester City. This meant that they would get financial support from the English club. But also on the pitch, we can see their influence on the team. The game between Lommel and Lierse ended with Lommel having 70 per cent off the ball against the 30 per cent for Lierse. And when we take a closer look at Lommel’s playing style we can see a similar style that former FC Barcelona and current City manager Pep Guardiola applies. Let’s take a look at this approach and its principles.

During this game, Manning looked to overload the centre of the pitch. He opted to play with a midfield box, which meant that Cejas moved to the inside to create a 4 v 3 situation against Lierse’s central midfield. Lierse’s midfield press was man orientated. This made it easy for Lommel to manipulate this press and find the free man. Mostly the free man would position himself in the blindside of one of the midfielders. Short passes between the centre-backs and the pivot would consequently give the Lierse midfielder who pressed the pivot a decisional problem. Once he would press passing options opened up to the free midfielder. 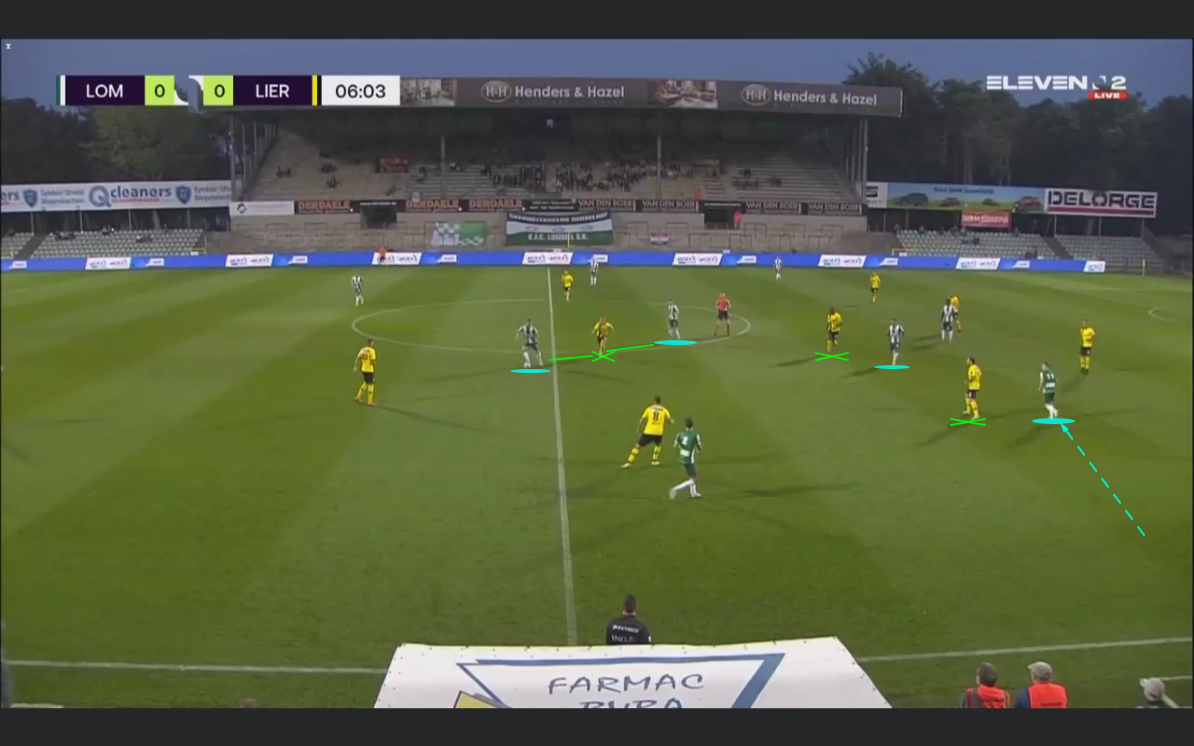 An effective midfield box makes use of positional switches. Positional switches create asymmetry, which has the effect of pinning the opposition’s last line and opening up spaces in between the lines. This is also known as vertical overload and this can be seen in the below image. With the occupation of the same channel the further player’s role effectively is to block a defender to open up a passing lane. He also creates space in depth and assures accessibility towards the deeper player. This vertical overload down the centre could also allow to separate from the tighter marking or to simply confuse the first and second line’s defensive behaviour. As it reduces the cover and gives more space and time the players surrounding the receiver of the ball. 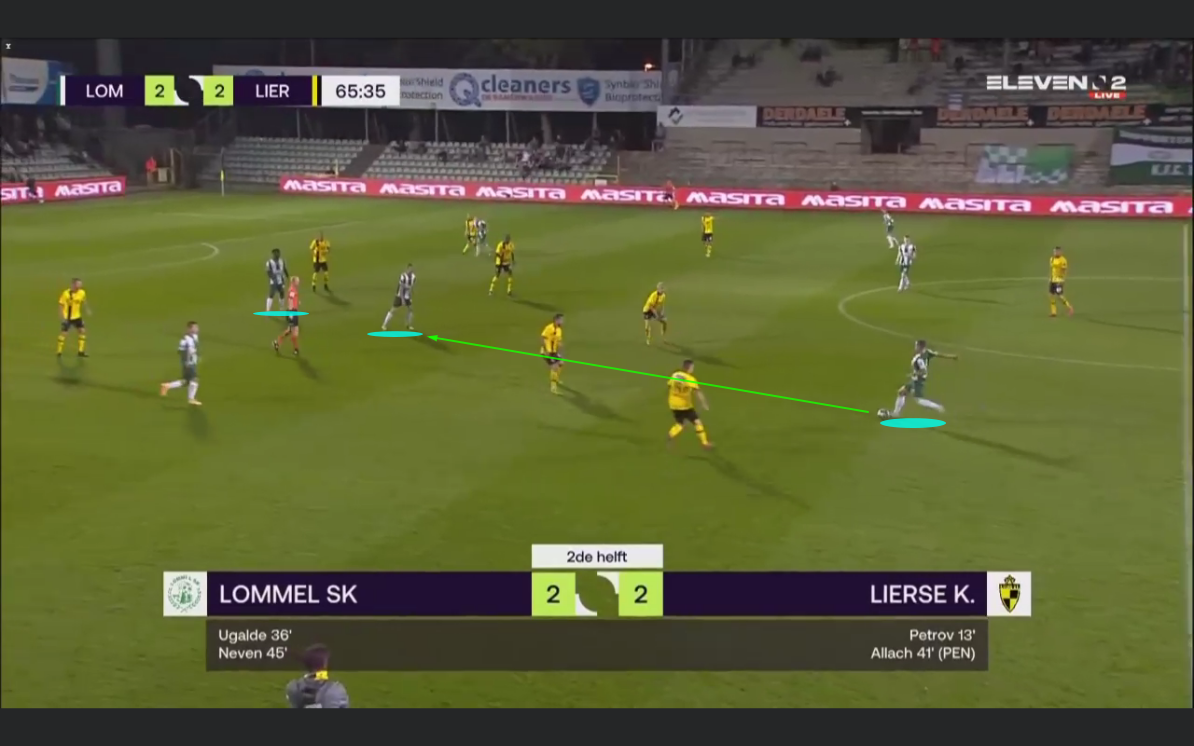 Another principle of the midfield box is to create an overload after penetration, especially in the attacking third. Beyond the several advantages like combination play through one-two’s, lay-offs etc. It also has a specific effect to stretch the opposition’s last line with pulling out the ball near centre-back wider at the penetration zone, to open up more spaces inside and consequently underloading the box. 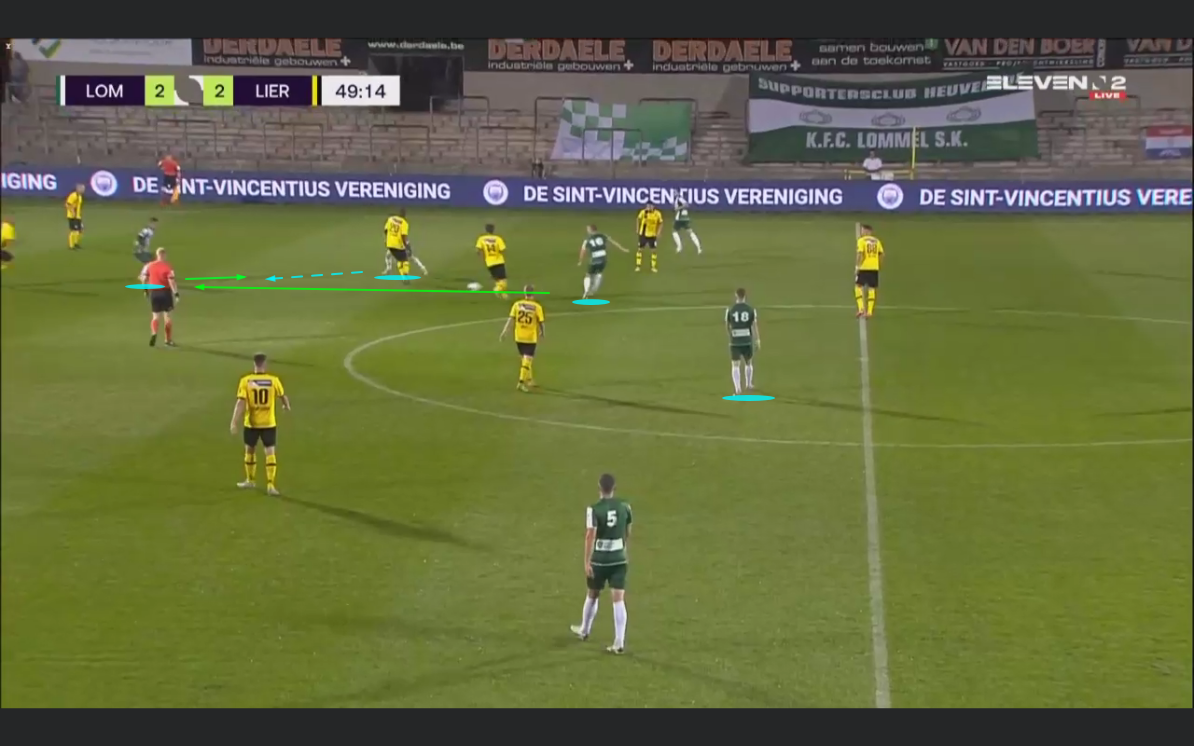 Lommel would not only look to progress down the centre but they will have unpredictability in their game by trying to progress down the flanks. Through rotations, vertical movements and diagonal passing they would look to find the free man. For instance below, the right-back runs vertically into the space behind the central defender which has been opened up by the dropping midfielder in the half-space. In this case, the overload isn’t used effectively because the movements haven’t been performed from the blindside of the oppositional man markers. 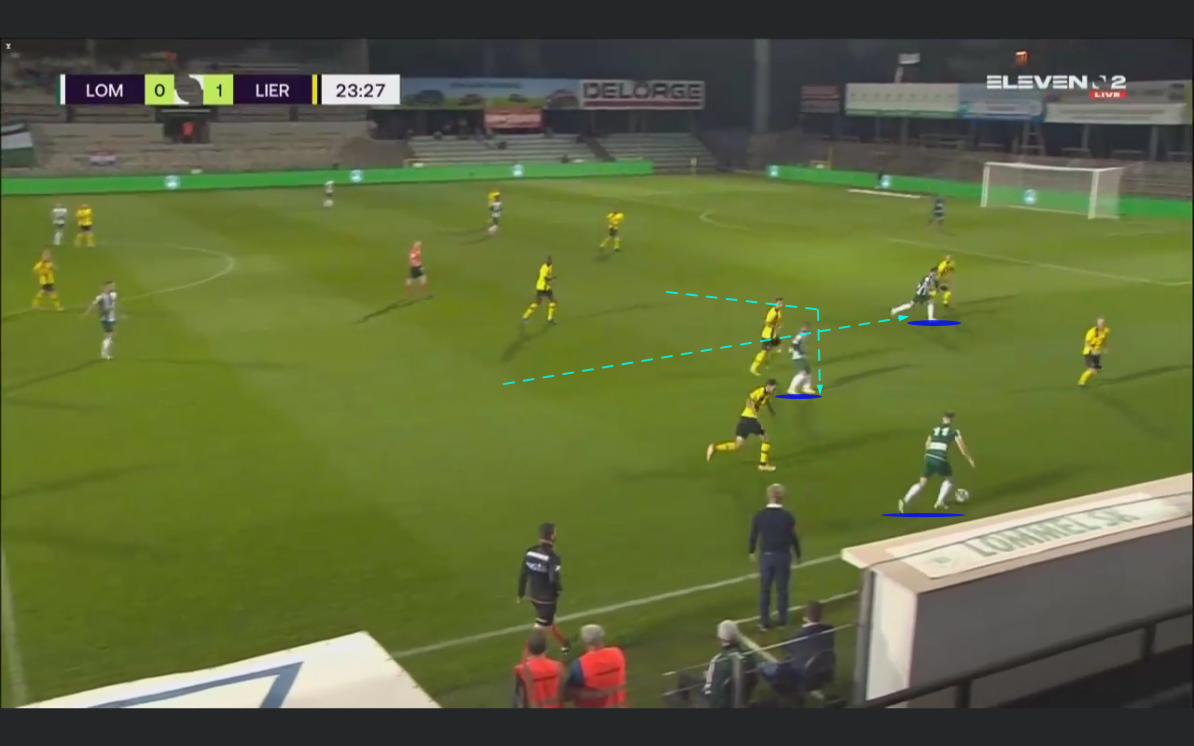 On the other hand, the overloads down the different areas of the pitch would make one think that progressing to Lierse’s final third was a piece of cake. But this wasn’t the case. In the below image we can see Lommel’s shot map. Most of their shots were taken outside the penalty area which means there was a lack of depth and penetration behind the defensive line. As a result, the overloads weren’t really a threat during the 90 minutes. 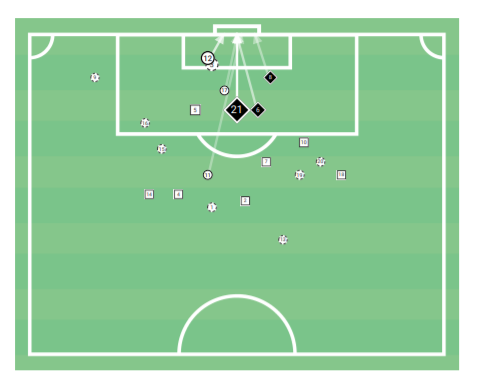 The above section clarified Lommel’s dominance of possession. To counter this dominance Lierse defended in a 4-5-1 structure and medium to low block. Earlier we discussed how they pressed often through man orientations in midfield. Thus, they were depending on Lommel’s shape and movement. As we can see below, Lommel built from the back in 3-1 shape with wide centre-backs. 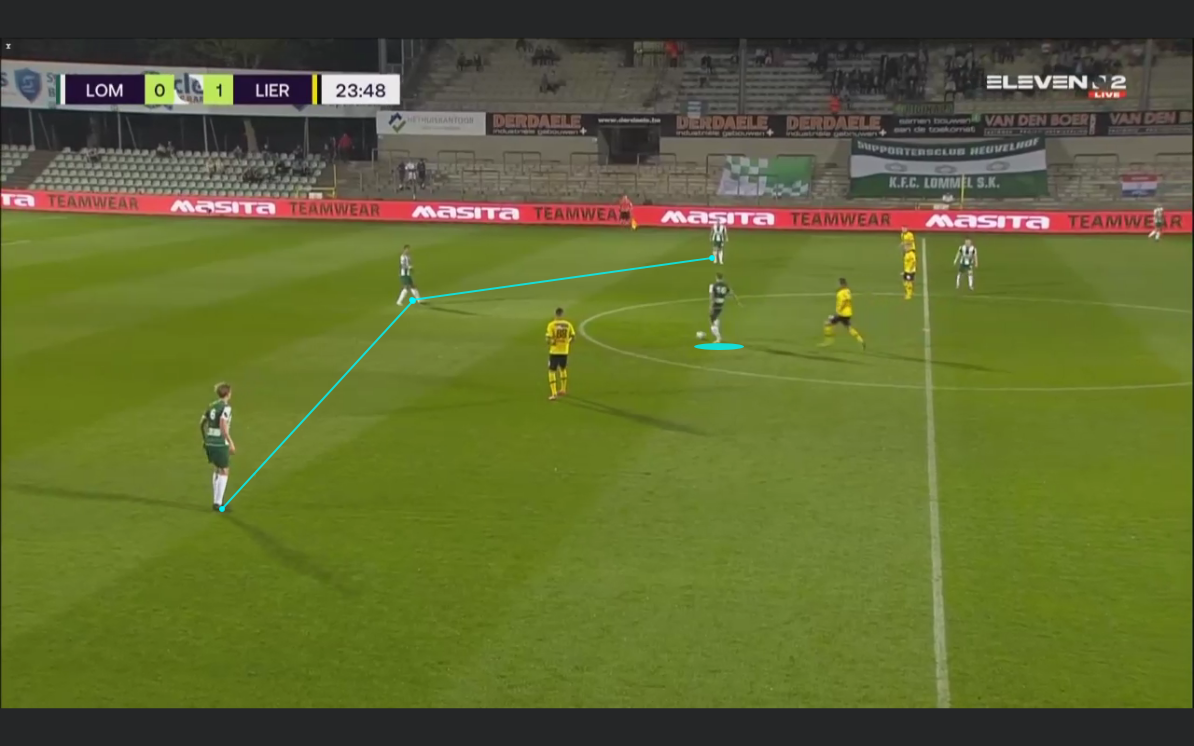 These wide centre-backs would have a huge impact on Lierse’s defensive structure. In the image below, we can see how the wide centre-back possesses the ball but it doesn’t trigger the second line of Lierse to step out and create a stagger or inch of space in between the lines. Consequently, the centre-back can easily pick out a pass due to Lierse’s winger not closing any passing options. 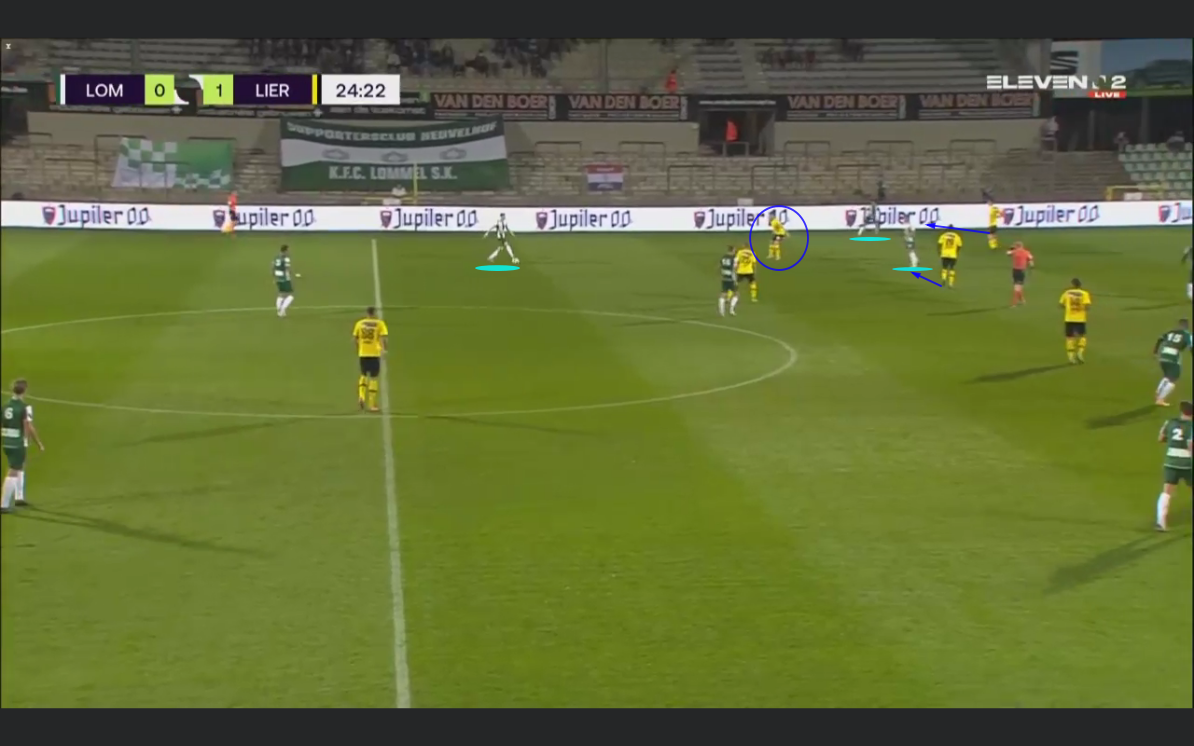 If Lommel would attempt more runs in behind, Lierse could have had more problems defending these wide occupations. But Lierse’s idea was clear as it is shown in the image below. Once the ball was played into the wide players, Lierse’s winger would turn and nullify the pass back option. Thus creating a 3 v 2 situation on the side. 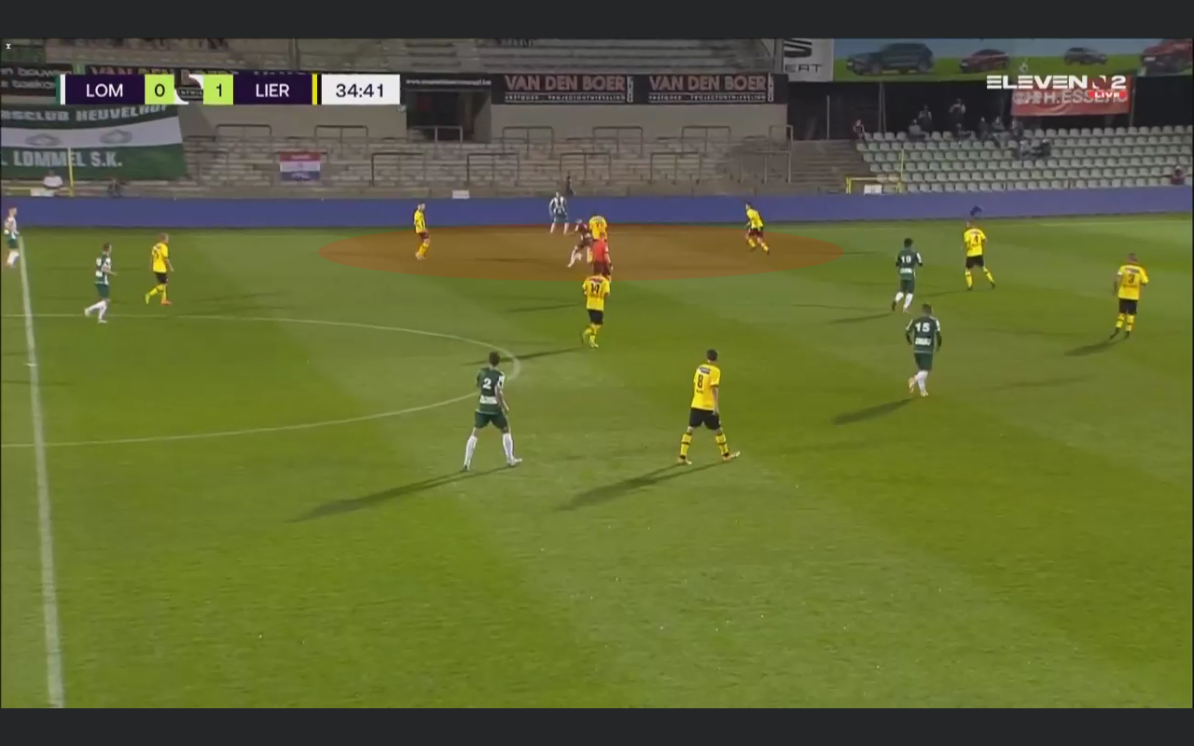 The away side also had benefits in attacking sense with their defensive shape. Although their block was rather low, it did when there was a lot of space in behind to exploit. Once the ball was won back in midfield, Lierse had at least three players ready to counter-attack due to their advanced positions during the defensive phase. Both half-spaces and the centre are occupied by one player, giving the ball carrier enough options and effectively stretching the rest defence. 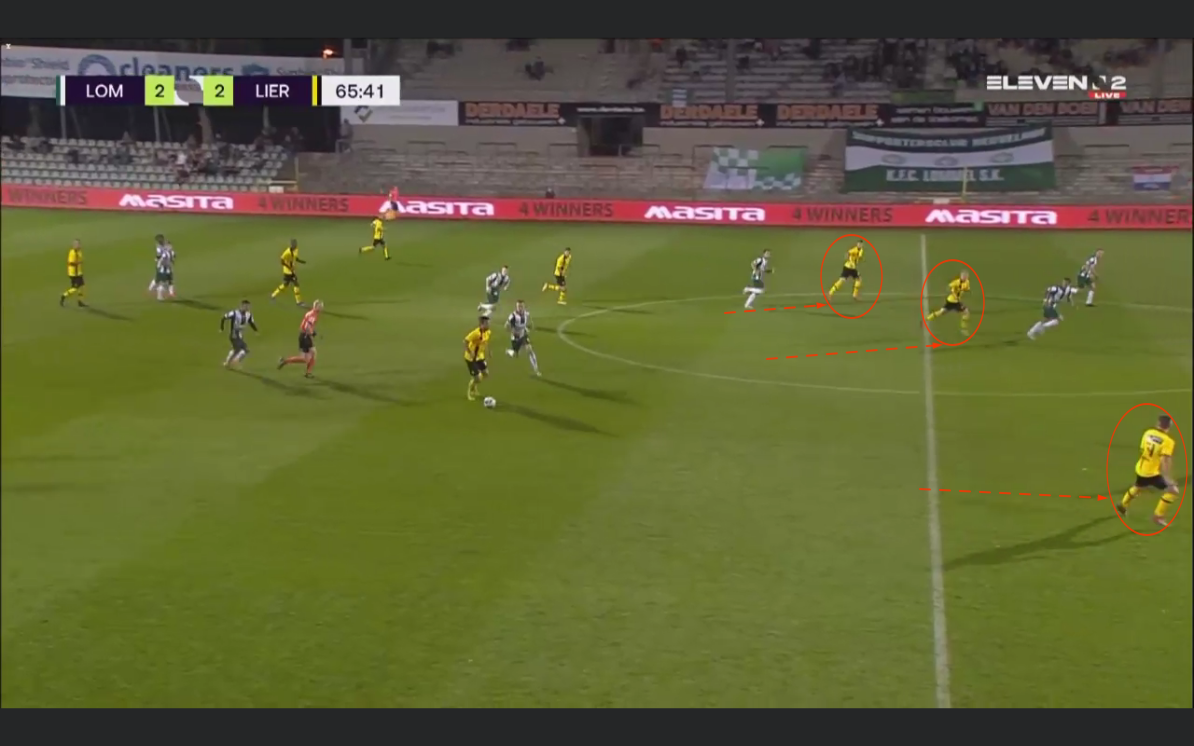 One way forward for Lierse

During the first half, Lierse’s attacks came mostly through counter-attacks due to the lack of possession. This changed during the second half. As the idea during a counter-attack is to find the opponents goal as quick as possible, Lierse’s game in possession is the same. They like to find the fastest way to goal through vertical play.

The stats back this statement. Lierse played 119 forward passes during the 90 minutes, in contrast to the 90 lateral passes that were played by them. Against Lommel’s man-marking structure in midfield, Lierse would find space through bounce passes. In the image below, a bounce pass is played. Here the centre-back and midfielder occupy the same vertical lane which results into a vertical pass being played. After that a lay off to the pivot gives the pivot the chance to receive the ball with his face to the opposition’s goal and the defensive man-marking system can be manipulated. 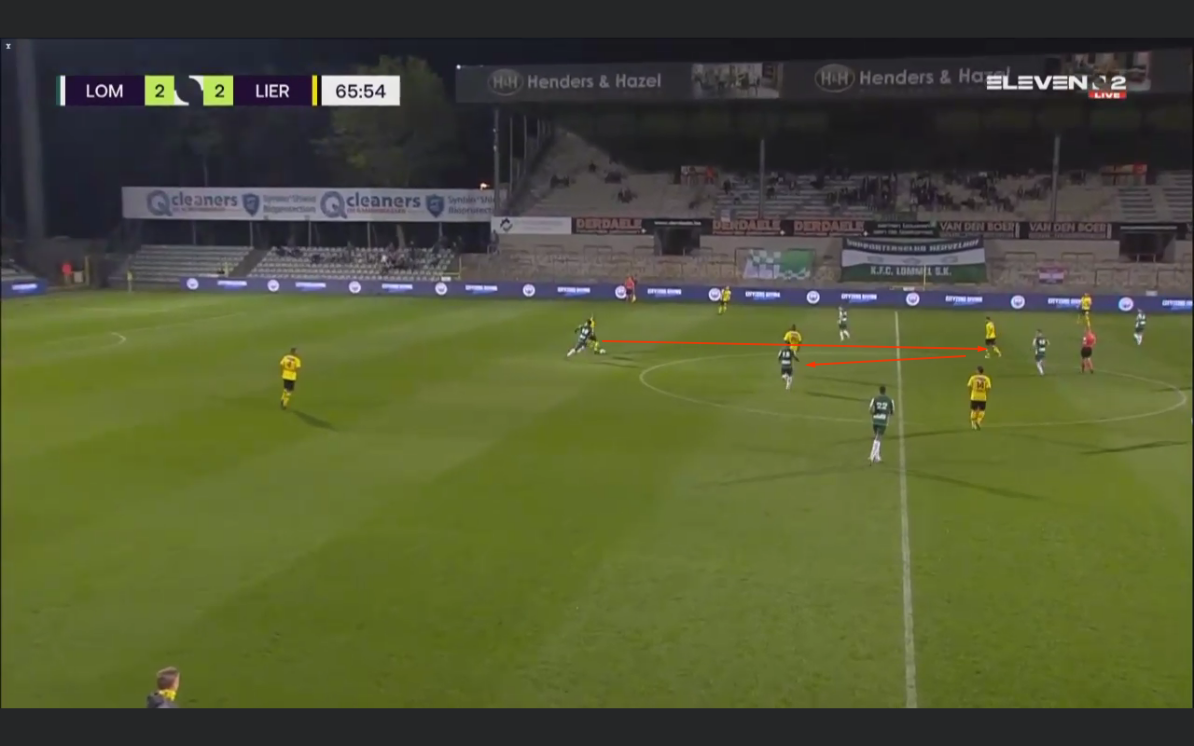 Another example below shows the physical strong target man Petrov. Once played, he can lay off and run to the opponent’s goal. And with Lommel’s lines not always close to each other, space opened up between them. What follows is a lay-off and a pass out wide. 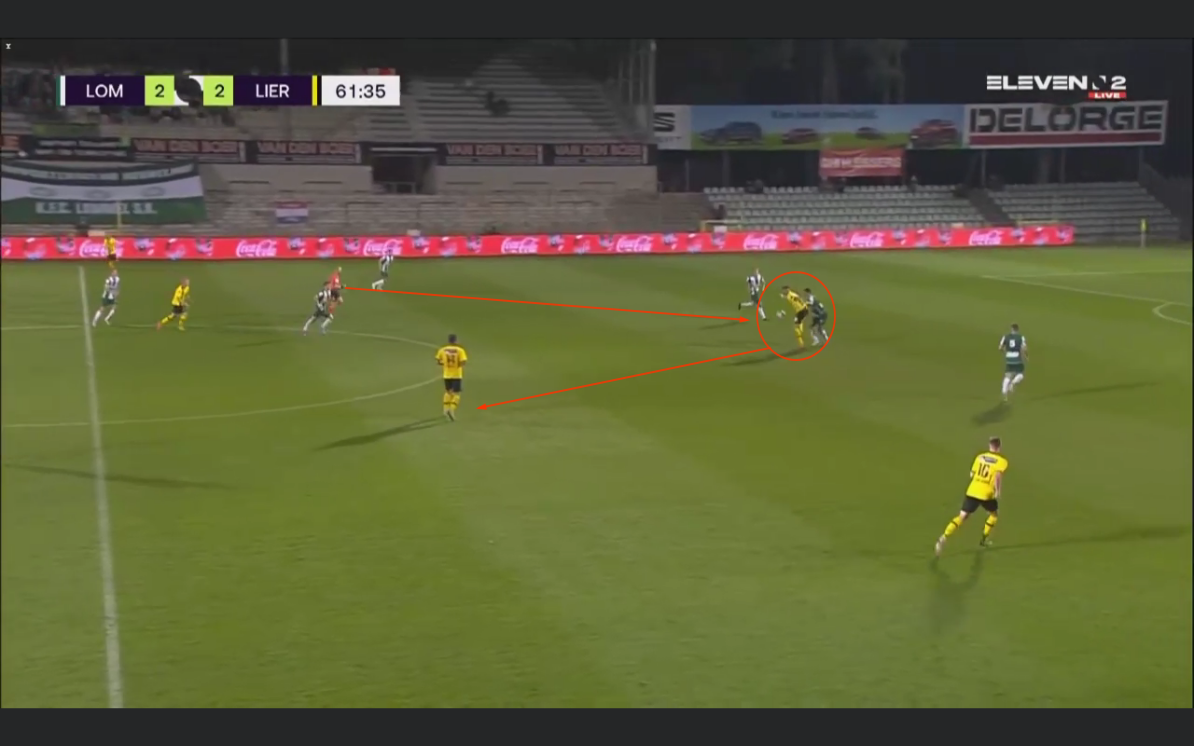 With Lierse players trying to attack the opponent’s penalty area, the away side look to cross the ball to find them. This would happen through early crosses from in front of the penalty area. The big advantage with these types of crosses is the space in behind it leaves for players to run into. To create space for the cross to be given a wide overload is created through an overlap by the ball near full-back. The overlap gives the winger space to cut inside and deliver a cross. 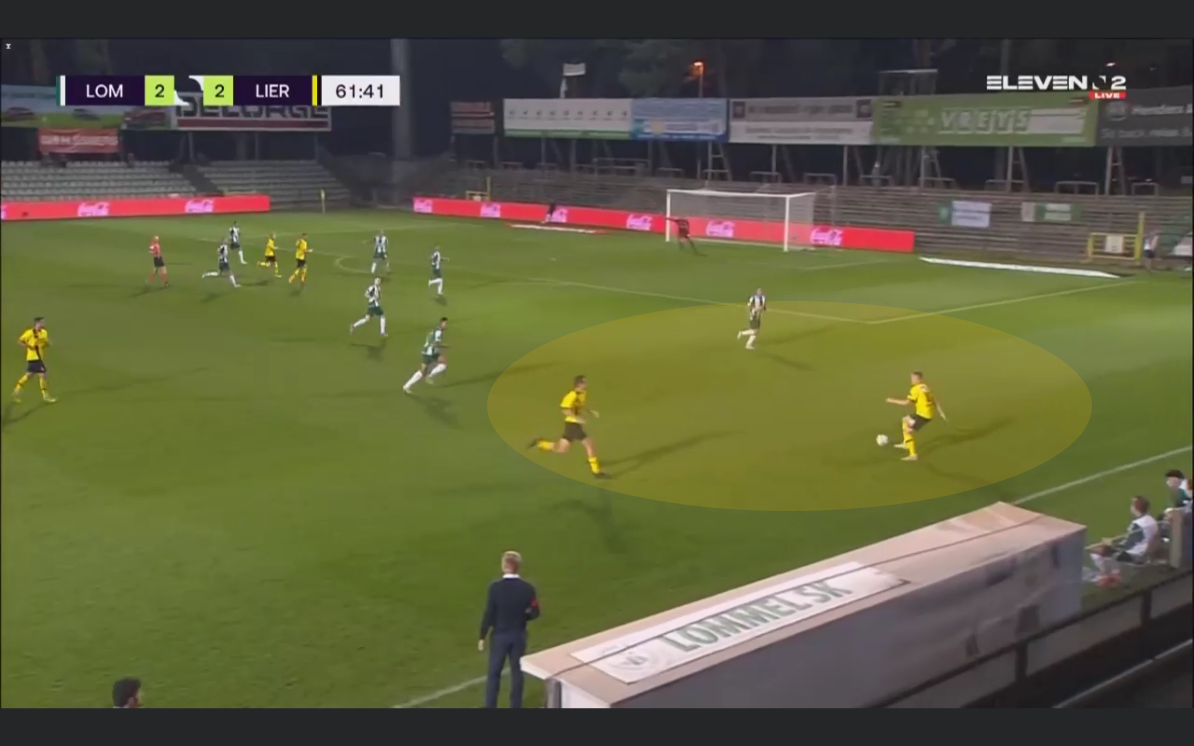 As three of the five goals came from set-piece situations, it would be a shame to keep out a section explaining both team’s strategy behind them.

Lierse were the first to take advantage of a set-piece during this game. Lierse initially start with the same number of players at the far side of the defensive line. But with the use of the of a player blocking the defensive player, they create a numerical superiority at the back post in the form of a 3 v 2 situation. Note that the far side is overloaded because the ball has a longer time to travel giving the offensive players more time to run into depth. From this free-kick rehearsal, Lierse force the penalty out of Lommel. 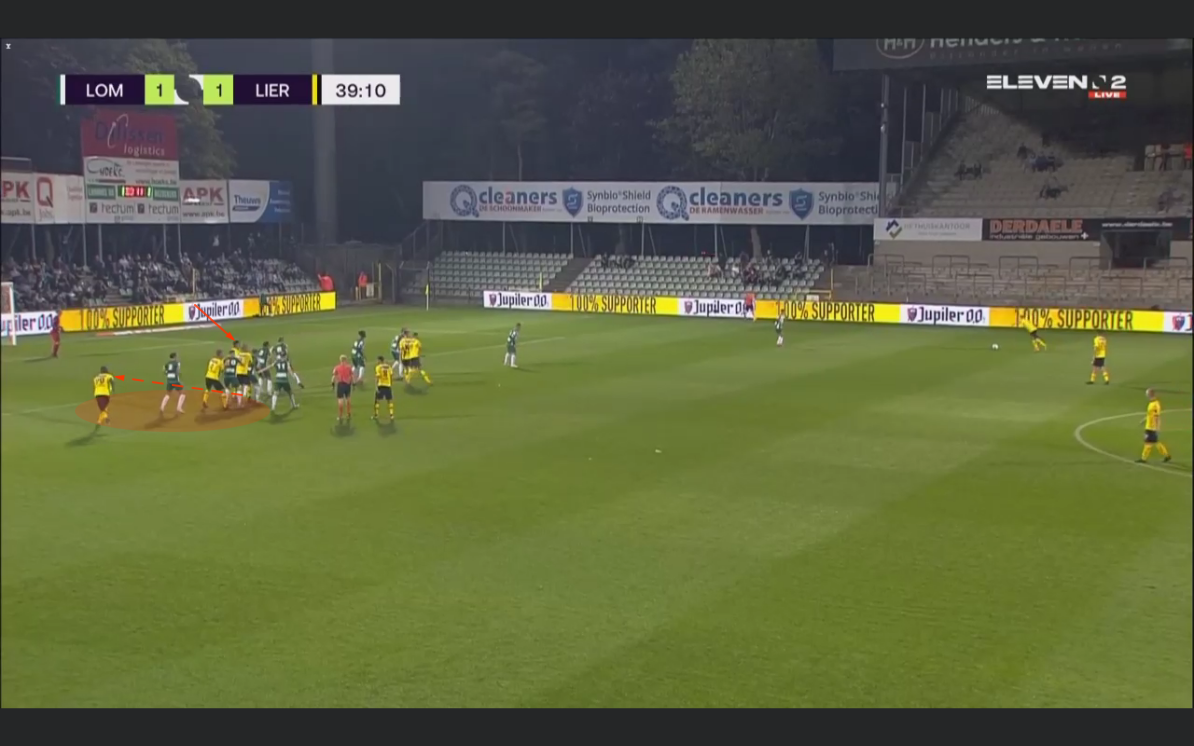 Lommel also had some success in the set-piece area using the same tactics as Lierse. In the below image we can see why. Lommel stagger in a pair with Neven as the deepest player in a train. This creates distances with the man marker, who now can’t get close to his marker. Kadiri has then got the task to pin and hold back one of the zonal defenders in the first zone. Whilst one player acts as a screen in front of the goalkeeper to prevent him from coming off his line. What follows is Neven making a run from deep in front of Kadiri, who is pinning the zonal defender, and nodding the ball into the back of the net. 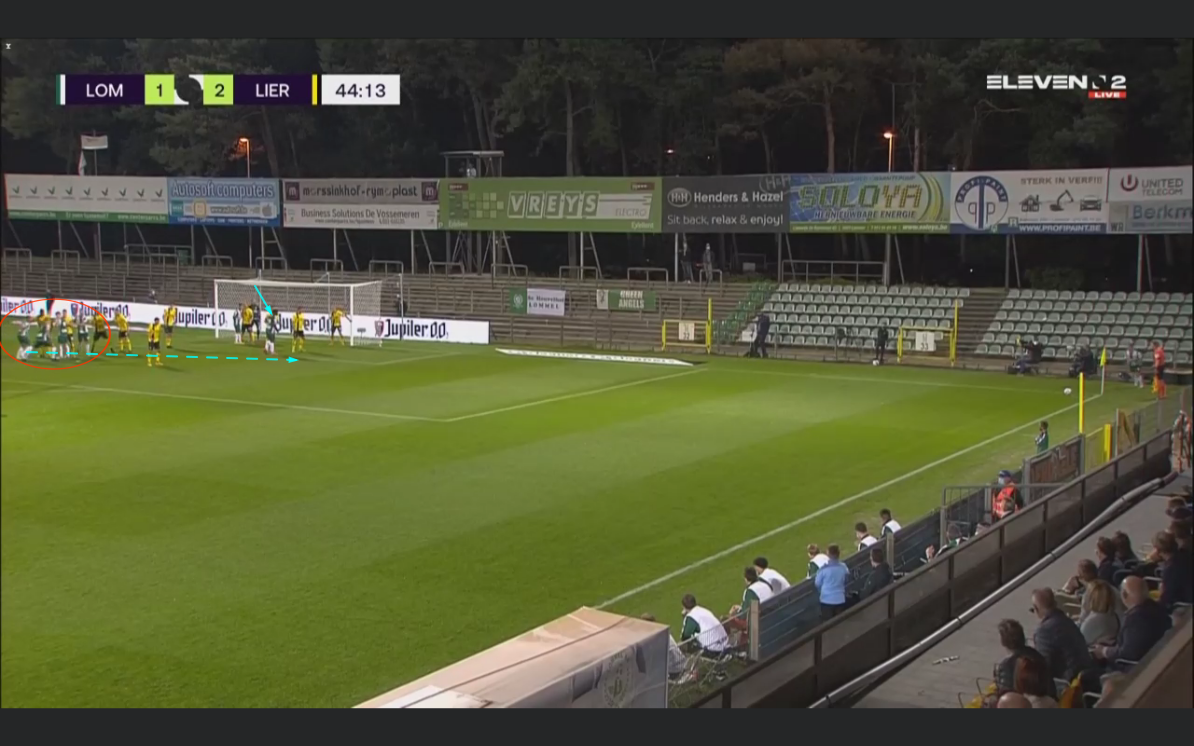 Another example here, just to show this wasn’t a fluke. It was obviously a well-rehearsed set-piece as Lommel nearly scored again through the same pattern. Here we can see Kadiri again pinning the zonal defender as he crouches against him. Again Neven makes the run to the first post but this time the attempt is cleared off the line. 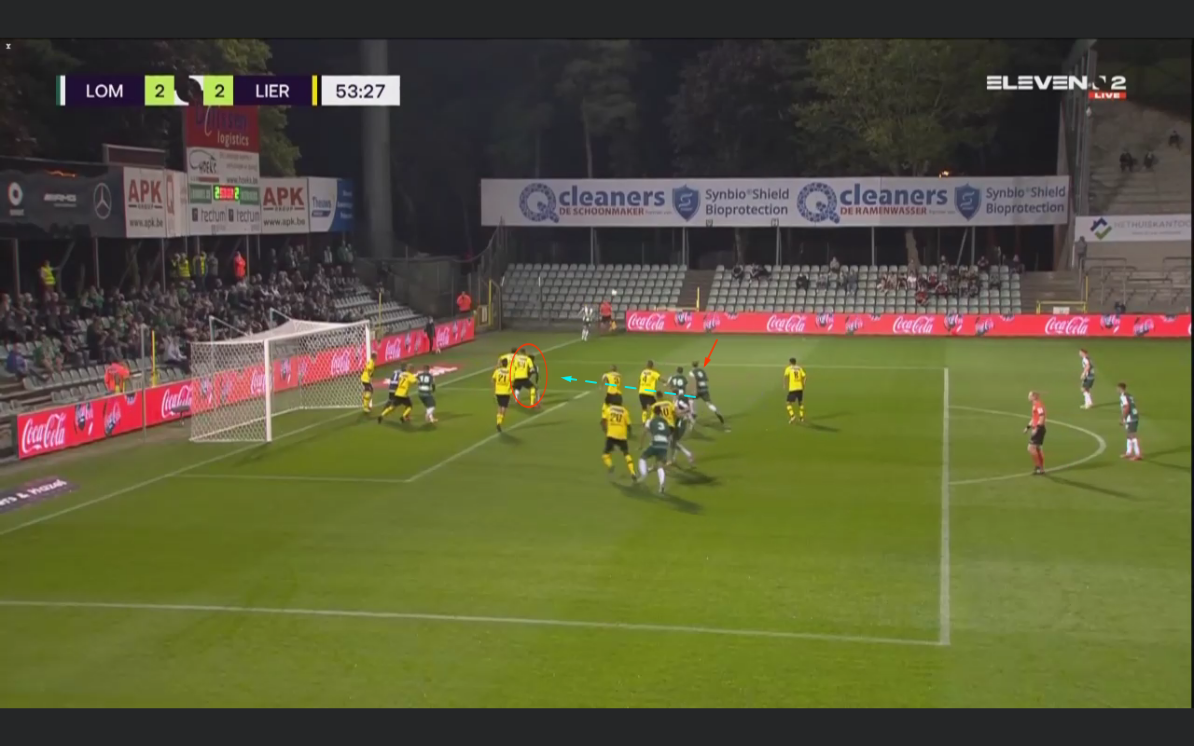 This highly anticipated game in the Belgian first division B ended in a 3-2 win in favour of Lommel. In possession, Lommel had a well-worked strategy although they lacked depth during this game. Out of possession, there is still some work to do as they now conceded nine goals in three games. Manning’s men will look to build on this positive result. As for Lierse Kempenzonen, they will look forward to the next game against the reserves of Club Brugge.