The San Siro hosted a dramatic affair between two Serie A giants AC Milan and Juventus on the 7th of July. This tactical analysis will break down the game that ended 4-2 to Milan.

Milan, led by Stefano Pioli, looked to create goalscoring opportunities down the flanks and hit Juventus on the counterattacks with some of their faster forwards. These tactics have not been steadfast under Pioli, who has been looking to play possession football where possible, but against tougher opposition, it is not uncommon for AC Milan to exonerate a possession focus. This game plan also worked against Lazio in their last match, beating the top two teams in Serie A on the trot, to make for a stunning rise up the table for the Rossoneri.

Juventus, managed by Maurizio Sarri, have looked mightily impressive since the return of Serie A football, producing competent and cohesive performances to back up their victories. Under the former Chelsea coach across the season, Juventus have been decidedly less dominant than previous years with Massimiliano Allegri at the helm, but they have shown improvements in recent weeks. This analysis will take a deeper dive into this game, and how Milan managed to undo much of Juventus’ recent work.

Milan lined up in a 4-2-3-1 formation which looked to play a relatively deep line, steal the ball from the opposition regularly in their half, and then run at the Juventus defence. Pioli’s side was fronted by Zlatan Ibrahimović and supplemented by Ante Rebić as a second striker, which has been a blossoming partnership as the season has continued. The wingers at the start of the match were Lucas Paquetá on the left, and Alexis Saelemaekers on the right, both tasked with helping progress the ball into the final third.

Regarding the midfield, Pioli went with Franck Kessié and Ismaël Bennacer as the central midfield pivot, both fully capable of putting in a good amount of defensive work, required by the tactics in place within this game. The back four consisted of (left to right) Theo Hernández, Alessio Romagnoli, Simon Kjær, and Andrea Conti, opting to bench much-maligned Davide Calabria. Gianluigi Donnarumma kept his place as the goalkeeper. 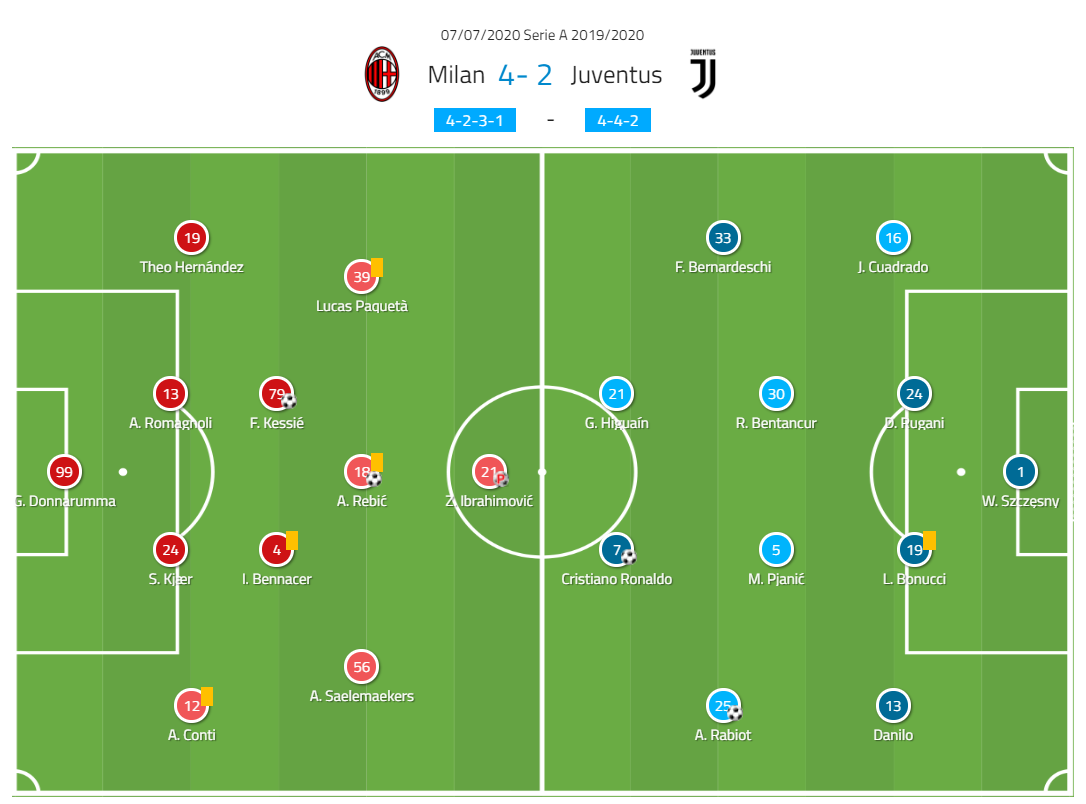 Juventus set out in a 4-4-2 formation by Sarri which looked to utilise the strengths of Juan Cuadrado to begin the majority of their attacks. The front two consisted of Cristiano Ronaldo and Gonzalo Higuaín, with Paulo Dybala missing out because of a suspension.

The wide midfielders in this game were Adrien Rabiot and Federico Bernardeschi, with Rabiot featuring in a position unfamiliar to his typical role. The two central midfielders were Barcelona-bound Miralem Pjanić and Rodrigo Bentancur, two players capable of dictating the tempo of the match with their passing. The back four consisted of (left to right) Danilo, Leonardo Bonucci, Daniele Rugani, and Juan Cuadrado, with Matthijs de Ligt missing out due to a suspension as well. Wojciech Szczęsny retained his place as the first-choice goalkeeper.

Milan have typically played with an aggressive pressing strategy this season when off the ball, and when they are on the ball, they have generally looked to slow down the tempo with a collection of short passes. Attacking down the wings has been their preference, mainly looking to utilise the strengths of Hernández on the left, and whoever plays as the right-back (Calabria or Conti).

In this game, their build-up was far more direct and fast-paced than their usual endeavours. Their wide players looked to take-on their opponents directly, dribbling at them, and offloading the ball when they drew the defender out of position. They were particularly effective at bypassing Juventus’ midfield block, and then Milan would look to complete passing interplays to drag the Juventus defence from one side to the other, to find space in the final third. In these moments, Juventus’ two central defenders (Rugani and Bonucci) were especially poor.

In the above analysis, Hernández begins the attack by dribbling towards Bernardeschi, dragging his positioning towards his body, then offloading the ball to Hakan Çalhanoğlu. He looks to receive the ball from Çalhanoğlu in the box.

After protecting the ball superbly, Hernández is in the clear to cross the ball into a dangerous area. He finds the head of Rebić, and his headed effort is deflected by a handball via Bonucci. This leads to the eventually converted penalty by Ibrahimović.

Despite the majority of AC Milan’s attacks coming down the left flank, it was the attacks down the centre of the pitch which were of the greatest value (see below).

In this match, their efforts in the final third down Juventus’ core were calm and considered, as they did not rush into their attacking actions. Ibrahimović was especially great at holding up the play and waiting for the runs of his fellow attacks before laying off the ball. This is indicative of the poor performances that Rugani and Bonucci put into this match, committing plenty of individual errors and constantly being dragged out of position.

In the above analysis, Kessié receives the ball from Rafael Leão and holds the ball until a defender approaches him. When Çalhanoğlu has the ball at his feet, the Juventus backline shifts towards his location, leaving space for Ibrahimović and Kessié to combine. 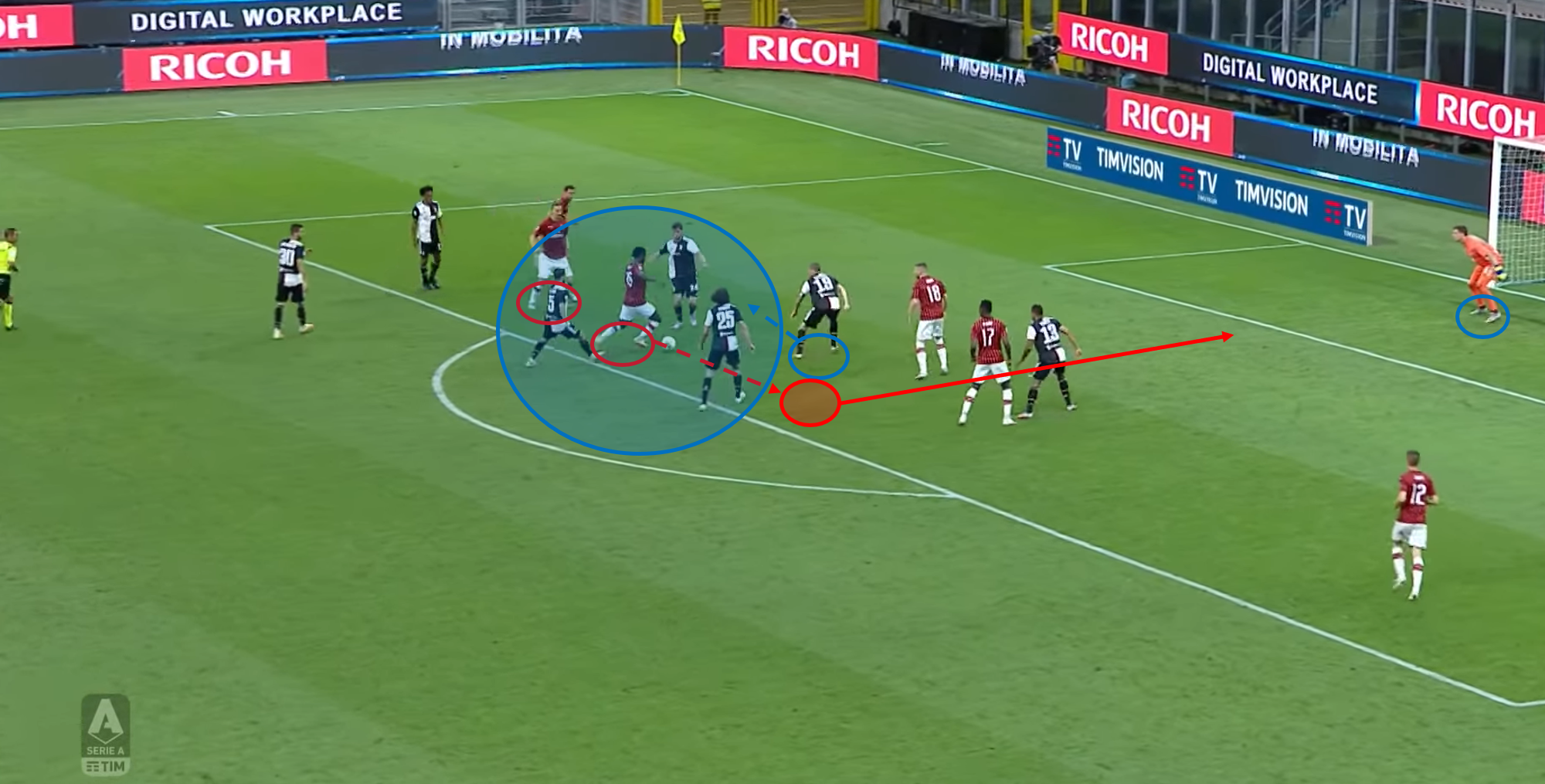 Ibrahimović lays off the ball to Kessié who is surrounded by Juventus players. He feints his body to the left, only to direct his run right, fooling Bonucci. He then finesses the ball into the bottom left corner, to make for a well-placed finish.

Milan took a period of time to adjust in this game. They did not come out the blocks with the sharpness required to beat a side like Juventus. Their first-half was not an impressive display, as they struggled to create chances of any real value while straining to contain the likes of Ronaldo and Higuaín. Heading into the second half, it began as much of the same, only they were conceding these chances, and before they knew it, Milan were 2-0 down. The penalty they were awarded and converted seemed to be the turning point where they believed they could win this match and began to create chances with a higher frequency.

Sarri’s side struggled to keep possession for a sustained period in this match, which is something you can seldom say about a side managed by the Italian. They completed several individual errors in this game, from the defence, all the way to the attack. Aaron Ramsey, Cuadrado, and Rabiot were all dispossessed three times in this game, a match-high. This demonstrates how much they struggled going forward in this match, with shoddy decision-making across the board.

Primarily, the crux of Juventus’ best attacks was Juan Cuadrado. By his passing and his dribbling, he was able to add variety into the build-up which the Bianconeri desperately needed. In this game, he completed three recoveries, two dribbles, and eight progressive passes, aiding his side chiefly in the transitional phase of play. This enabled Juventus to exploit the space down the right, which was often left by Paquetá, plus Hernández who was key to Milan for chance creation. 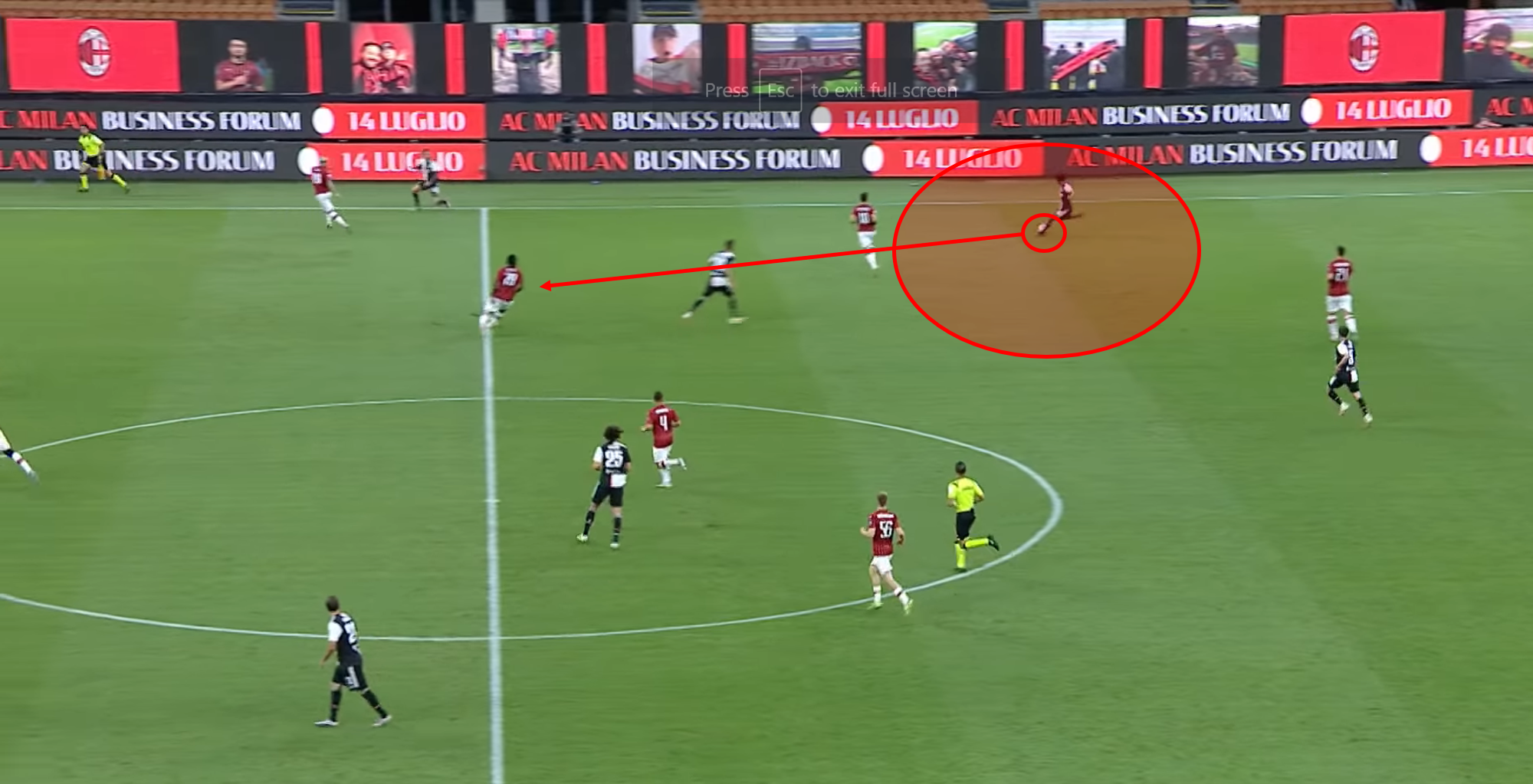 After recovering the ball deep in his half, Cuadrado has plenty of space and time on the ball. He notices the run of Ronaldo, in behind the opposition defence. 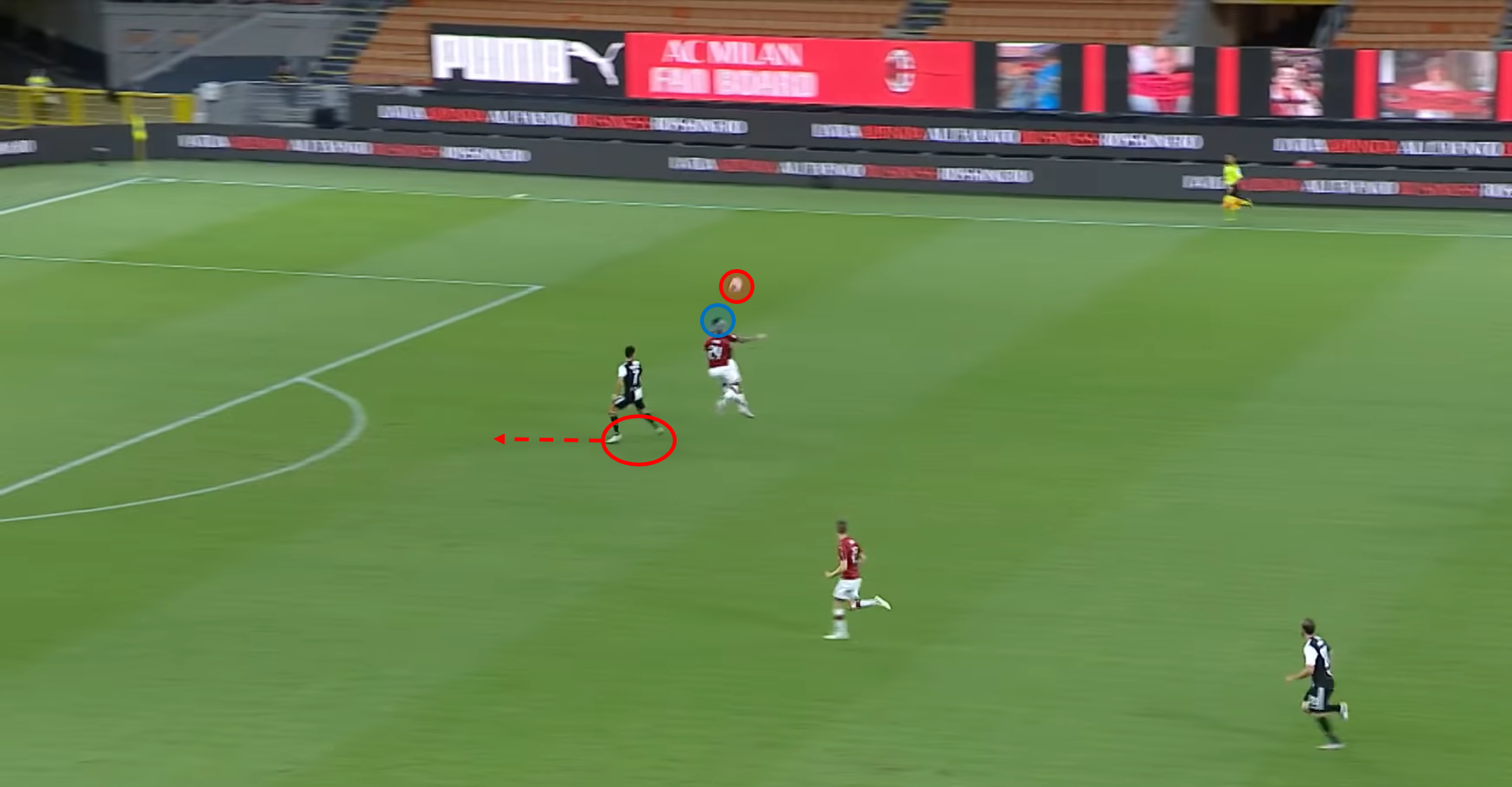 Here we can see that thanks to the weight of the lofted through ball, it misses the heads of both Milan defenders and into the path of Ronaldo, who eventually smashes the ball into the back of the net, breezing past Donnarumma’s right side.

This was essentially as good as it got for Sarri’s Juventus in this match-up. Outside of a wonderful solo goal by Rabiot, Juventus struggled to create anything of note from open-play. A great chance was created through a corner-kick by Bernardeschi and unfortunately missed by Bonucci, but they failed to take advantage of any of the other ten set-pieces they took. Milan played remarkably well in the second half, and perhaps Juventus undermined the ability that the Rossoneri had in their ranks.

Rebić endured a tough adapting period at Milan, barely featuring at the start of the season, mainly being utilised off the bench. Since earning his spot in the first XI, he has either featured as a second-striker complementing his forward partner or as a left-winger who likes to cut inside. From 1,002 minutes of Serie A football, he has produced 0.51 xG and 0.15 xA per 90, accompanied by a magnificent 31% conversion rate and 8.6 touches in the box per 90.

The 26-year-old put in a well-rounded display against considerably tough opposition, but in this game, he managed to make Bonucci and Rugani look like basic defenders. As well as his assist for Leão, he managed to grab a goal of his own, to truly wrap-up this match in the 80th minute with a poacher’s finish. In this game, he completed two dribbles (both high up the pitch and vital for chance creation), took three shots, and managed three passes into the final third. His rich reign of form was encapsulated by the day’s performance. 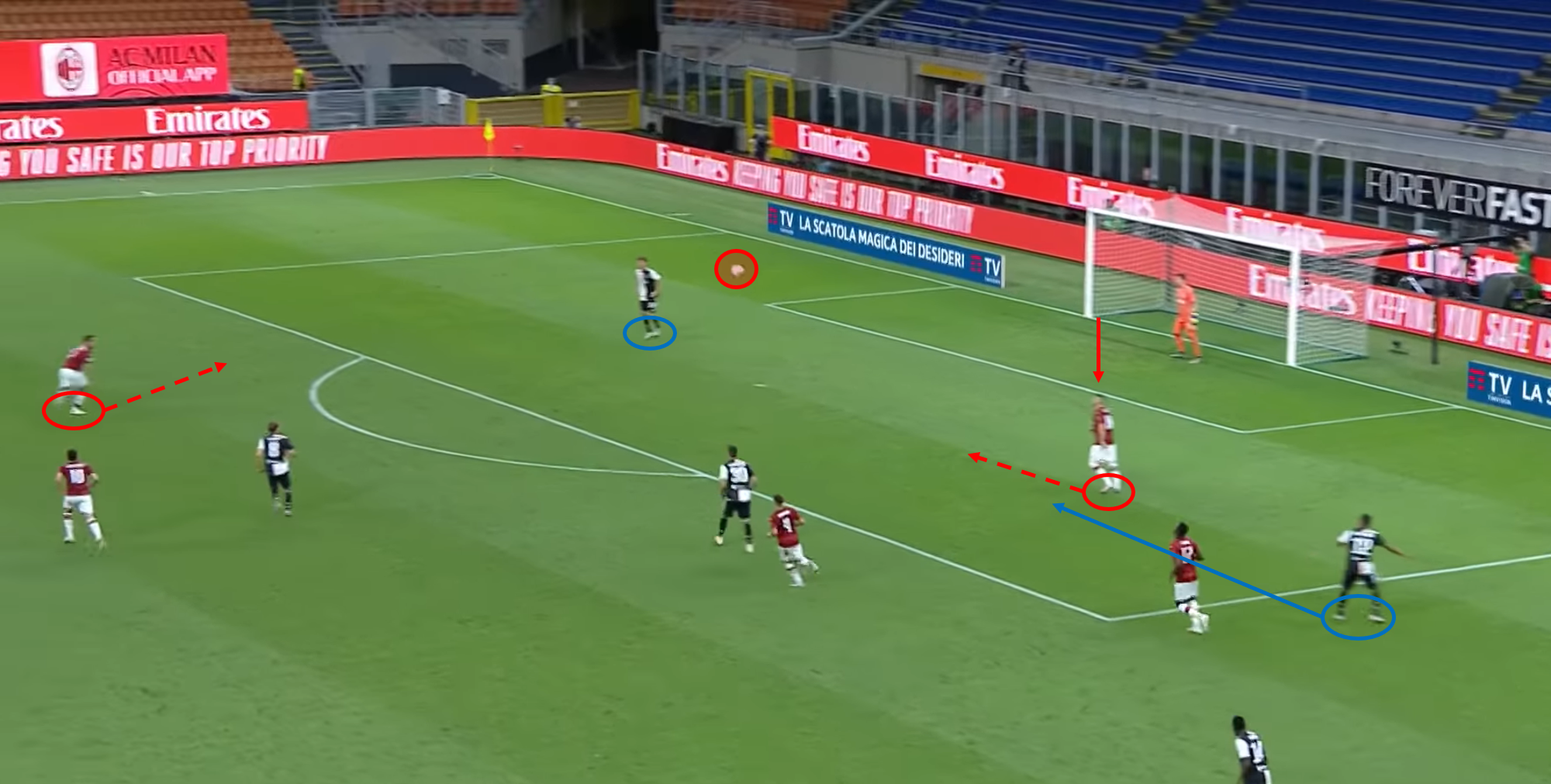 In the above analysis, we see Alex Sandro send the ball across the pitch, only to meet the path of Giacomo Bonaventura, who anticipated the ball’s flight pattern. Rebić is already in the right position to receive the ball in the box.

Bonaventura squares it to Rebić who has time and space to calmly finish the ball past Szczęsny, partly due to some poor positioning on behalf of Bonucci.

Finally, we can see that this was ultimately a fair result, as Milan continue to improve under Pioli. Perhaps the margin of victory was blemished, but the xG had this game down as 2.21 to 1.46 in Milan’s favour.

Pioli can be happy with the way his men came back from 2-0 down and would go on to win the game in such a convincing fashion. His substitutes, namely Çalhanoğlu, Bonaventura, and Leão, were the correct ones to make and were a sign of his solid in-game management. Paquetá and Saelemaekers struggled to provide any value offensively in this game, and you would imagine they were only chosen from the start due to fatigue in the squad. Two incredibly impressive victories on the bounce have led to a new-found feeling around the club, with many supporters hopeful of what is to come within this young squad.

Sarri can take more negatives than positives away from this match-up. The loss of de Ligt in this game was visible throughout, and it seems they are more reliant on the 20-year-old than they would hope to be at this point. Although they have a noteworthy lead at the top of Serie A (seven as of writing), how they collapsed defensively has to be worrying for Sarri. Although, perhaps if Bonucci took his headed chance, then the game may have turned out differently, so there are shades of fortune attached to the game as well.