Tuesday saw a heated Premier League relegation match develop between 17th place Watford and last place Norwich at Vicarage Road. The return to league play hasn’t been kind to either side, as neither has seen a league match victory since February. This tactical analysis will discuss the strategic setups of both sides and explain how Watford’s quick adjustments overcame Norwich’s lack of organisation. 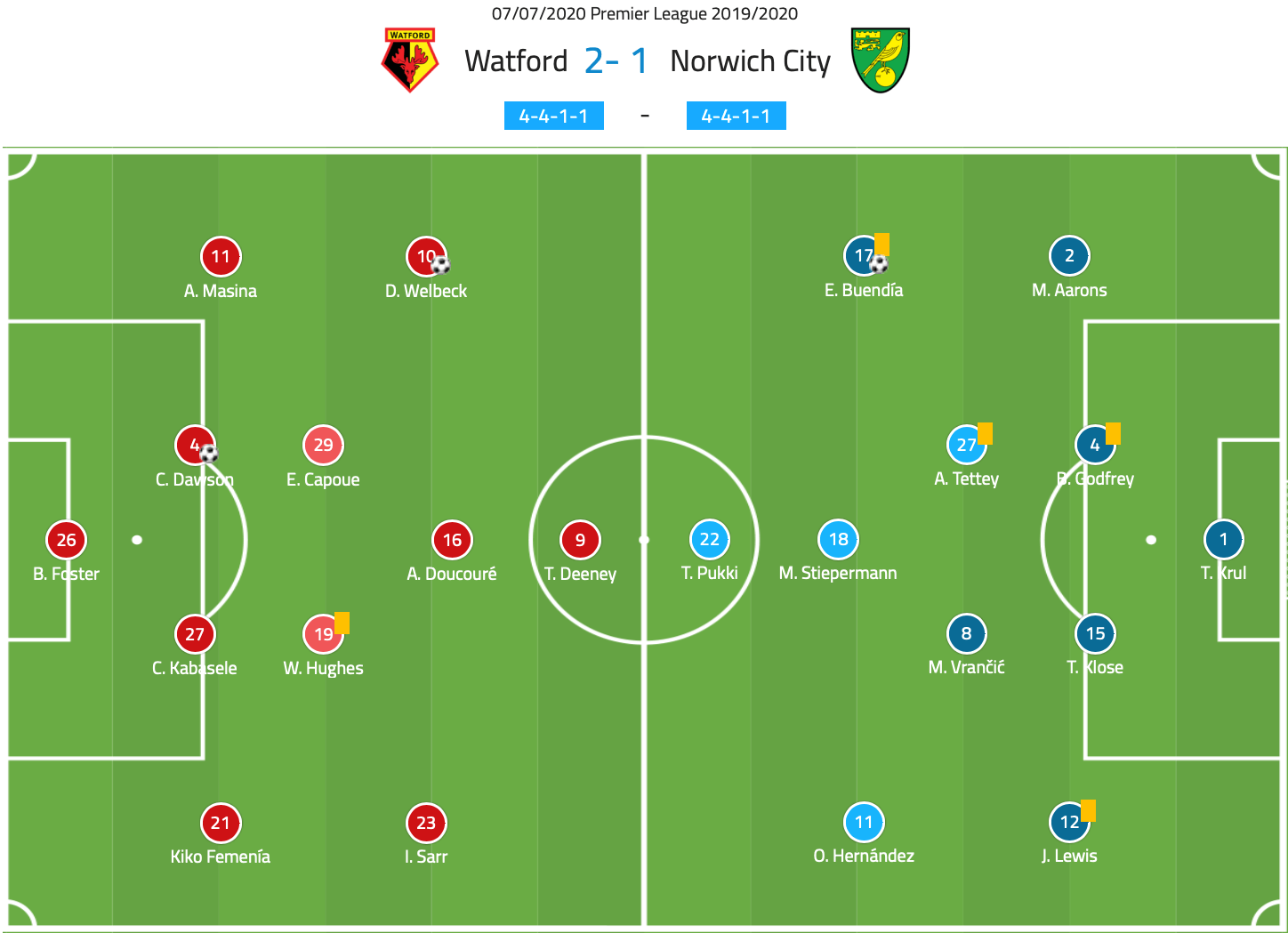 Both managers set their players up in similar positions. Kiko Femenía, Christian Kabasele, Craig Dawson, and Adam Masina formed the back four for Watford’s Nigel Pearson. Will Hughes paired up with Étienne Capoue in the central midfield, with Ismaila Sarr and Danny Welbeck on either side of them. Abdoulaye Doucouré flowed in the areas around striker Troy Deeney.

Norwich manager Daniel Farke had to make do without midfielder Todd Cantwell for the match. Max Aarons, Ben Godfrey, Timm Klose, and Jamal Lewis made up the backline behind Mario Vrančić and Alexander Tettey. Emiliano Buendía, Marco Stieperman, and Onel Hernández filled out the midfield. Club-leading goalscorer Teemu Pukki started as the striker.

Watford initially began the match with a high pressing scheme. With Doucouré moving into all areas across the front, the ball-side winger and midfielder also pressed high. In the example below, Doucouré pressed wide off the throw-in, and Sarr and Hughes utilised cover shadows while pressing the receiving player. 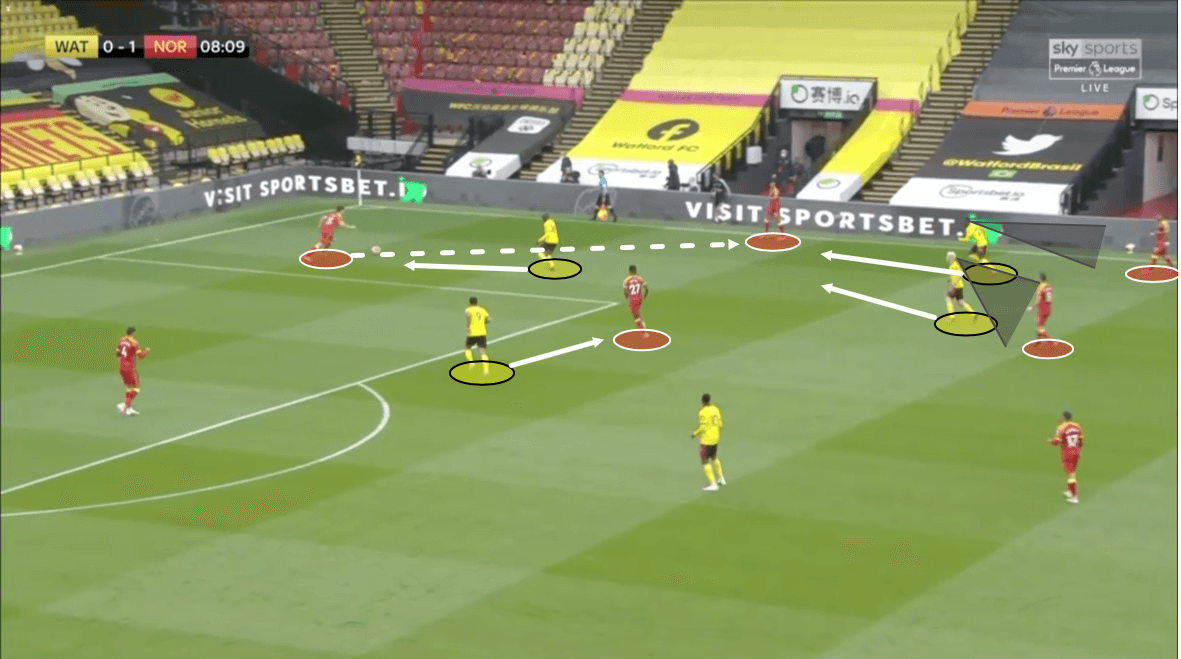 While this did create a free kick which resulted in Watford’s first goal, the high positioning involved in the press led to a gap between the midfield and the backline. Norwich exploited this gap on the opening goal. After beating the right-back Femenía on the run and picking up the long ball down the left side, Hernández drove towards the box. Hughes, the only Watford midfielder back defensively, shifted into space where the right-back would normally be positioned. The central area in front of the backline now had zero Watford defenders and three Norwich attackers. Hernández was eventually easily able to find Buendía in the right half-space inside the box, who shot a curling effort past keeper Ben Foster for an early first goal of the match. 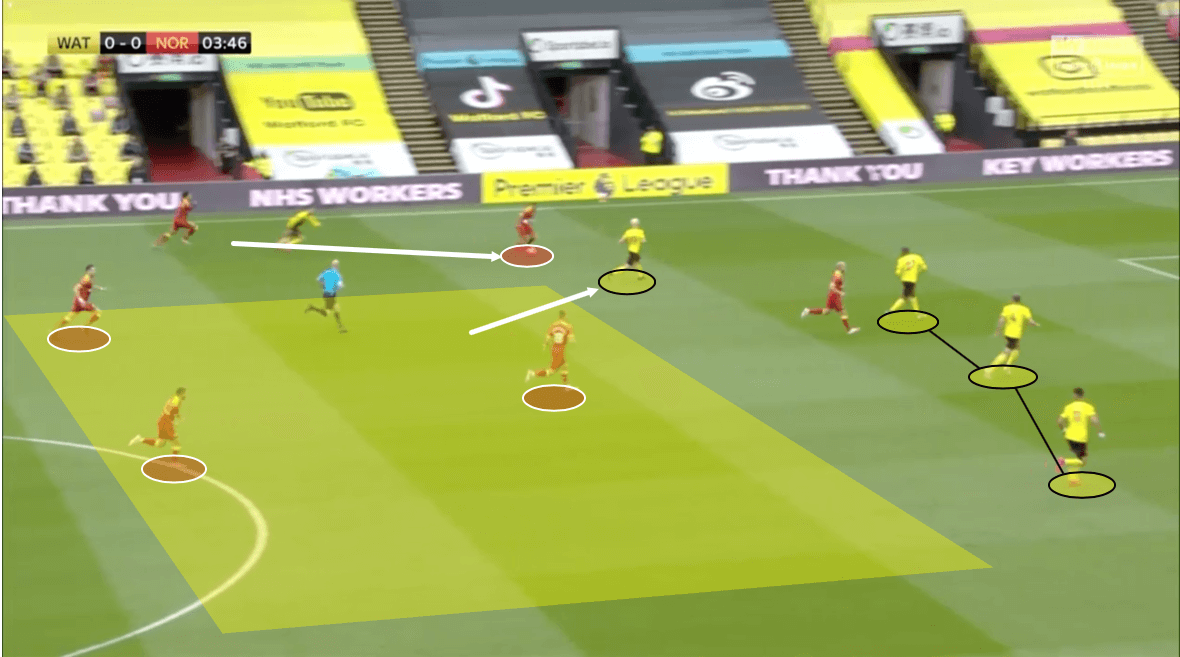 A different match tempo eventually fell into place as Watford began slower, more calculated defensive tactics in their own half, and Norwich controlled more possession. Watford defended in fluid front-two formations, often with the wingers dropping back in the wide areas and half-spaces to defend. 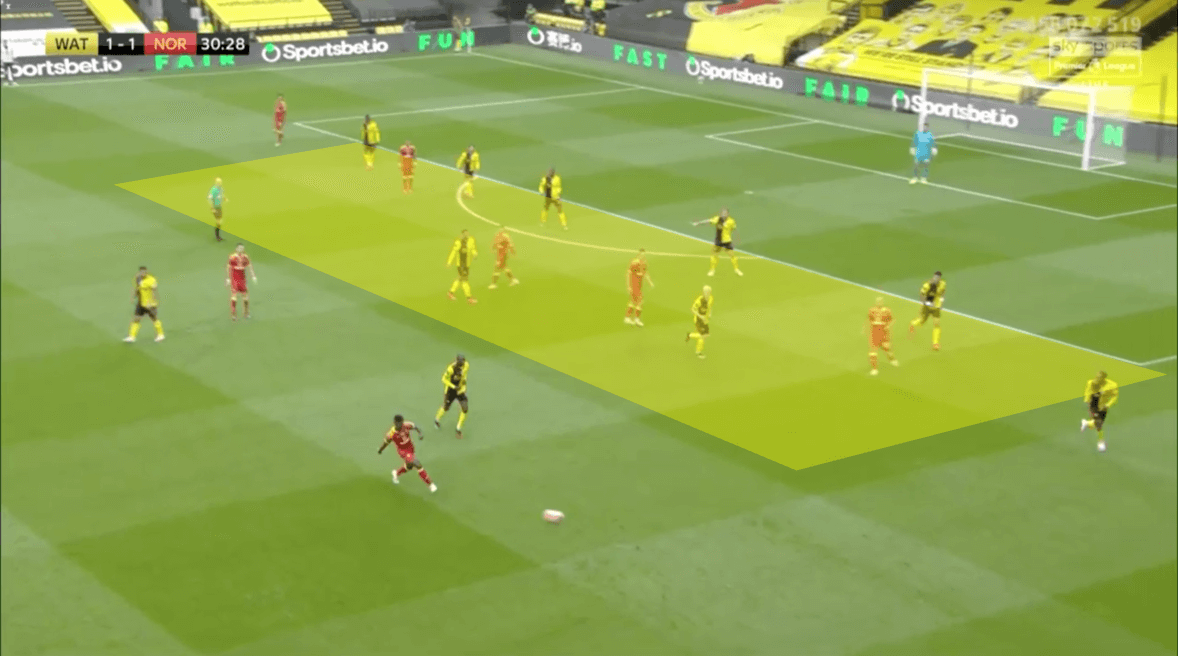 This shift is further proven by Watford’s PPDA chart below. After early attempts to constrict Norwich’s buildup, Pearson opted to force the more pressing side to attempt to penetrate a more limited space by pulling his defence back. Watford averaged a PPDA of 19.22 throughout the match. 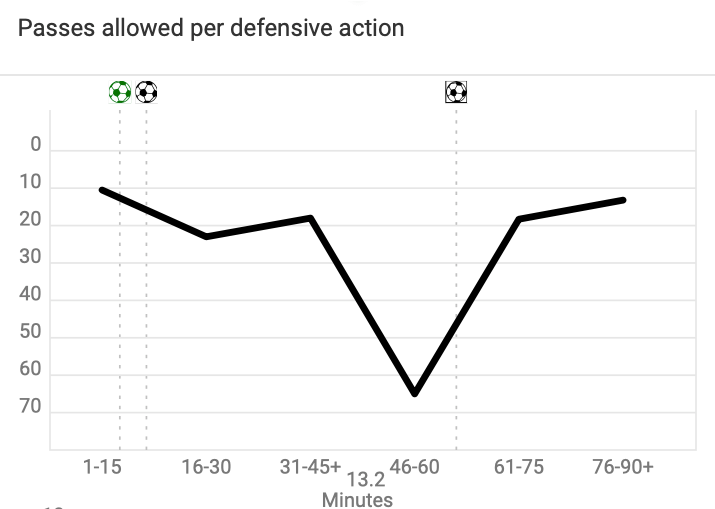 Watford’s effectiveness in the defensive block was aided by the back two lines’ strong structure and communication. In the following image, the two centre-backs Kabasele and Dawson scan the area in front of them to mark out attackers. Also notice three defenders surrounding Pukki, who was held to just 23 touches throughout the match. 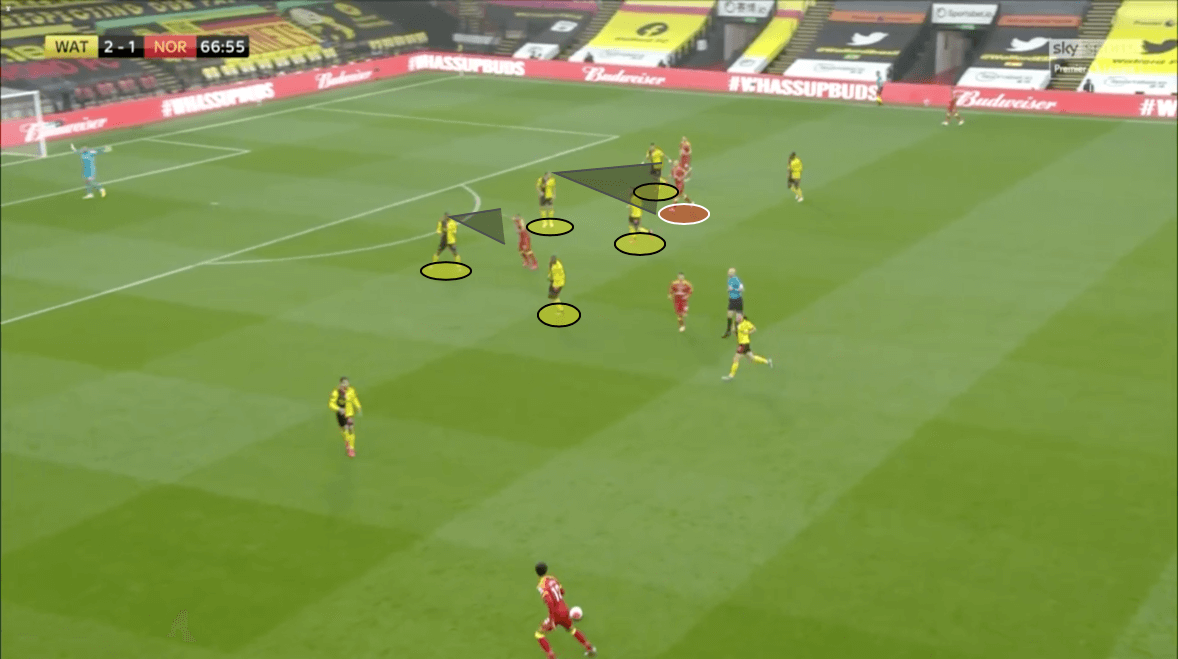 After Norwich’s opening goal, Watford quickly answered with the following designed set-piece from an intriguing free kick spot. Dealt similarly to a corner kick, a group of Watford players crowded the near post at the top of the six-yard box. This left Deeney and Dawson at the far post. As Capoue hit a strong free kick towards the far post, Deeney backed up, with his marker Tettey leaning against him. This forced Tettey backward just enough for him to struggle blocking the taller Dawson. The English centre-back fought past his initial marker Lewis, took advantage of Tettey’s loss of balance, and knocked in the equaliser. 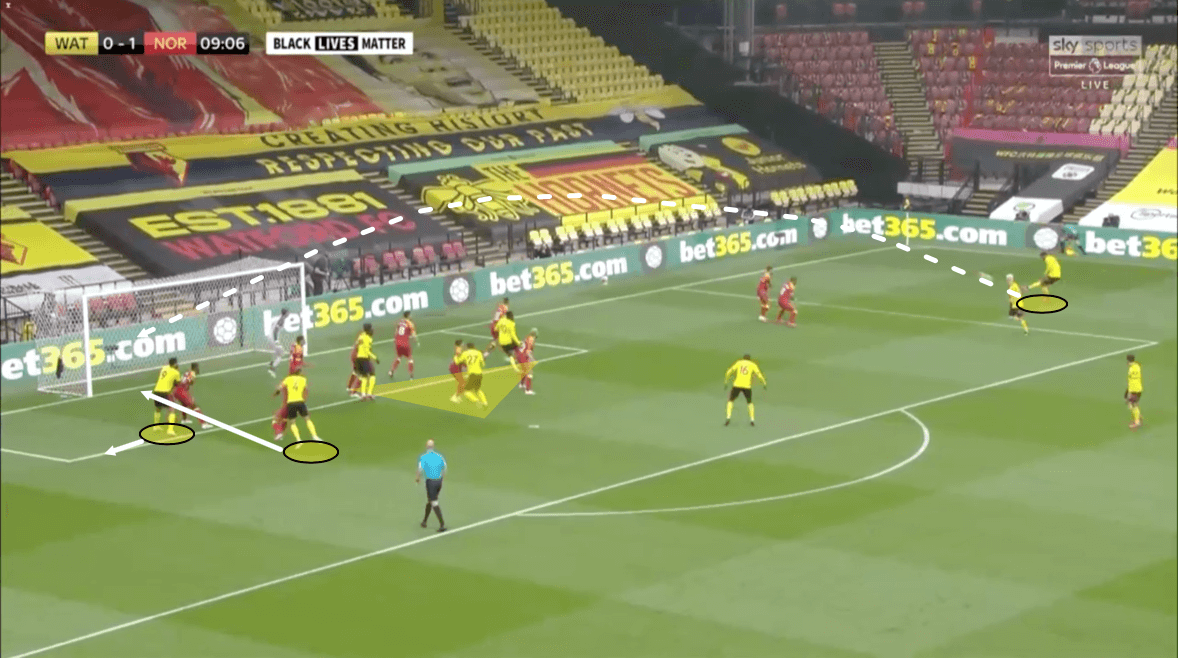 This free kick was just one example of Norwich’s poor defensive form. They have conceded the most goals in the league with 63, largely due to poor cooperation on the press. In the following image, Watford are easily able to bypass Norwich’s pressing with simple interplay in the wide area. Femenía received a backpass from Sarr, who then overlapped Hughes. Hughes’ positioning lured the opposing left-back Lewis forward, giving Sarr space to run into. Hughes completed the quick turn and pass to the Senegalese winger, whose cross nearly resulted in a shot on target. 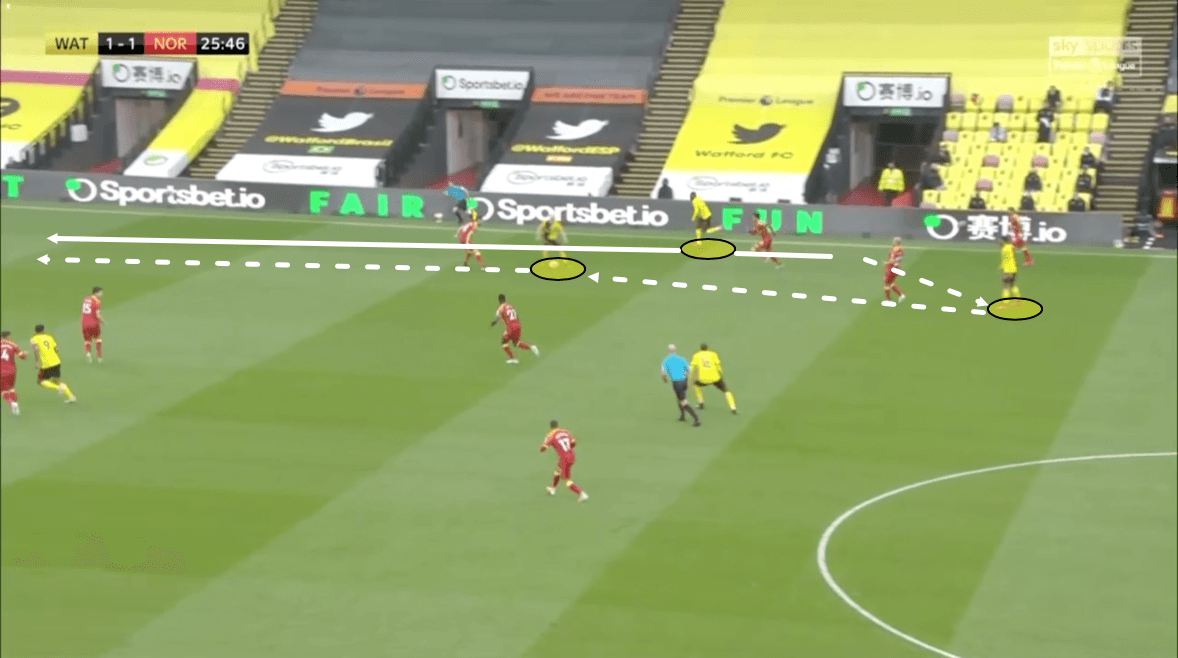 Norwich once again showed this lack of organisation and urgency on Watford’s second goal, seen below. On a counter-attack, Sarr dribbled the ball into ample space down the right side with opposing left-back Lewis well behind him. With Deeney on the opposite side of the pitch- in the left half-space and well ahead of that side’s respective full-back- the Norwich centre-backs were stretched wide. Zone 14 was now wide open for an attacker to penetrate. Aarons did manage to reach the zone before the pass was completed inside, but his frantic body shape failed to clear the ball. Sarr’s pass reached Welbeck, and the former Manchester United and Arsenal striker hit a fantastic bicycle kick into the top left corner of the net. 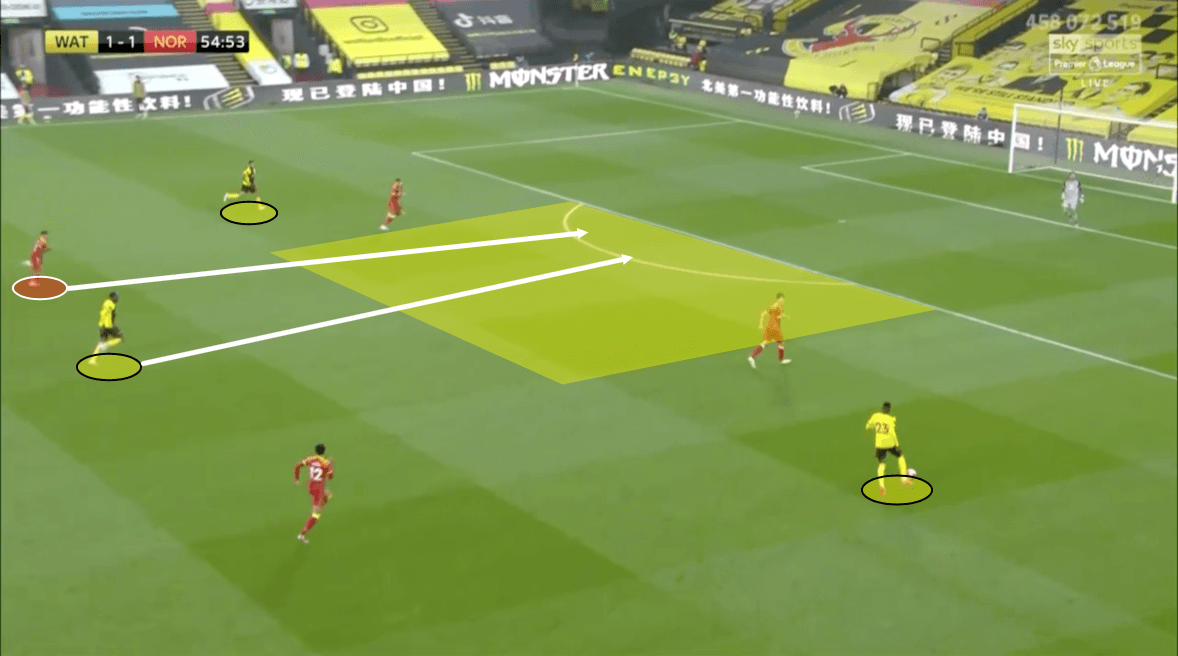 The poor organisation of Norwich’s defence is also evident in Watford’s crossing map analysis below. The hosts completed an impressive 35.29%, with most coming from Sarr and Femenía down the right side as an effect of Lewis’ high positioning. 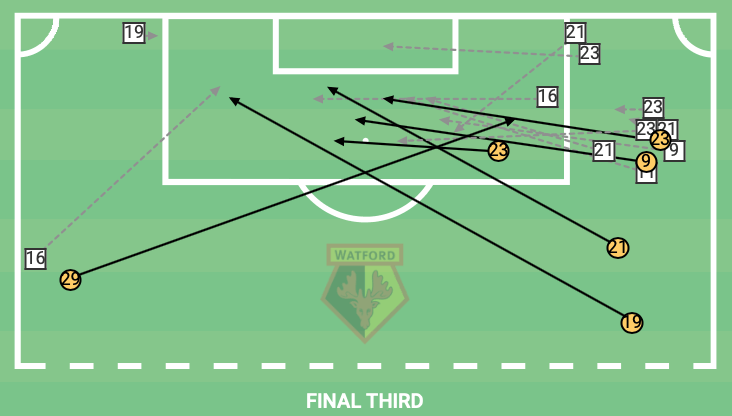 Despite a near-virtually equal expected goal score of 1.18 to 1.19, Watford seemed to be in more control of the gameplay throughout.

The Hornets ultimately held their lead. Pearson’s in-game management led his side to successful defensive strategies while his attackers were able to utilise the additional space in front of them to penetrate Norwich’s leaky defence. Watford will have more opportunities to move away from the relegation spots as play Newcastle and West Ham next before facing Manchester City and Arsenal in the final matches of the season. As strong as Farke’s side performed in the EFL Championship last season, the Premier League season has proven a difficult time for the Norfolk club. With a similarly up-and-down remaining schedule consisting of matches against West Ham, Chelsea, Burnley, and Manchester City, the Canaries have considerably slim hopes of staying above the red line and could see their fates confirmed when they host the Hammers on Saturday.