The fourth quarterfinal of this FIFA World Cup 2018 between Russia and Croatia proved to be a firecracker of a game. The hosts gave it everything but Croatia’s quality proved too much. Still, it took a penalty shoot-out to decide a restless encounter. The last two remaining Eastern European sides at the FIFA World Cup 2018 provided drama in abundance. Russia have exceeded expectations by reaching this stage. Croatia, led by the imperious Luka Modric, have created history.

Russia set up in a 4-4-2 where the second striker Golovin often dropped into number 10 role. Their line-up was Akinfeev in goal with Fernandes, Kutepov, Ignashevich and Kudryashov in defence. In midfield, they had Samedov to the right, Kuziaev and Zobnin centrally and Cheryshev to the right. Golovin and Dzyuba started up front.

Croatia set up in a very attacking 4-2-3-1. Subasic continued in goal after his penalty heroics in the last round. Vrsaljko, Lovren, Vida and Strinic made up the defence. Superstars Luka Modric and Ivan Rakitic sat in a double pivot behind an attacking trio of Rebic, Kramaric and Perisic. The striker was Mario Mandzukic.

Despite the quality of Croatia’s midfield duo of Modric and Rakitic they struggled to dominate the game early on. One reason for this was Russia’s effective pressing. Another was the poor structure of the central areas. Rakitic would often drop in-between the centre-backs to get on the ball as the full-backs pushed forward. The wingers, however, maintained their wide positions and Kramaric stayed behind Russia’s midfield line. This left Modric as the only central player to progress the ball to. But when Modric often made dropping movements into the wide-right area, Croatia had no central option. The results was the ball often ended up in wide areas where Russia could press and force a long-ball forward. 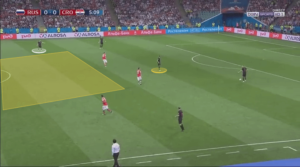 As the image above highlights, Rakitic drops in to create a 3 vs 2 against Russia’s forwards while Modric moves wide. The lack of a central presence in midfield makes Croatia play outside the Russian defensive structure, making it easier to defend for the Russians.

Thankfully for Croatia, they are very good in wide areas. They managed to create dangerous situations a few times, especially down the right where Rebic would move into the half-space while Vrsaljko pushed forward. An example can be seen below as Vrsaljko receives a pass into the depth and then crosses well for Mandzukic. 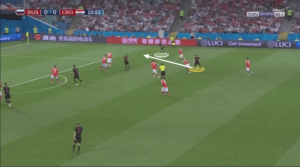 Russia went into the tournament without much hope after a poor few months. They were superb in the group stage though where they energy overpowered opponents and their defending impressed against Spain in the round of 16. The changed their 5-3-2 from that game to a 4-4-2 in this clash but many principles remained. The pressing was still very efficient and often forced Croatia into long-balls. When they didn’t press they dropped into a compact 4-4-2 shape and looked to cut off the central areas, which they did very well. 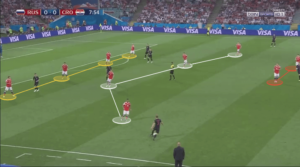 The image above highlights the compact nature of Russia’s defensive shape. They worked in a positionally-orientated defensive system where they shuffled across well and worked together to force Croatia into wide-areas where they would press with intensity. The back-four, in particular, were excellent with their positioning and defended crosses really well.

In possession, they often looked for direct attacks on the counter through Golovin and Dzyuba with Cheryshev joining from the left wing. They often went long to the towering Dzyuba and Golovin would then look to feed off the scraps from the aerial duels. The opening goal was a case in point. Ignashevich played a long-ball towards Golovin and the second ball was picked up by Cheryshev. The winger attracted the attention of both Croatian midfielders and went for a one-two with Dzyuba before scoring with a thunderous strike. 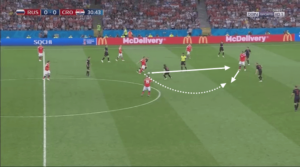 When they went forward they did so with a purpose and often flooded the box with players when they had the chance to cross. As you see in the below image they had a good setup to deal with potential counters as three players are ready to attack the ball in the box with an additional three just outside to deal with the second-ball. 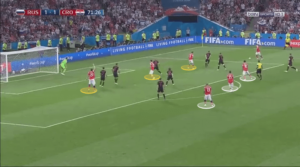 Given the start Russia had made and then the goal it looked like they would have a great chance of reaching the semi-final. But they must have been bitterly disappointed with the equalizer they conceded. Russia pressed Croatia high up the pitch and Subasic went long towards Strinic on Croatia’s left. As you can see in the image below, Russia committed six players to the press and then the right-back Fernandes challenges Strinic in the air. As Strinic wins the header it leaves Croatia with a 4 vs 3 advantage in the Russian half. As the ball drops for Perisic, the ball-near centre-back Kutepov goes for the ball but the winger flicks it into the path of Mandzukic. Mandzukic then races through before crossing for Kramaric (yellow) to score. 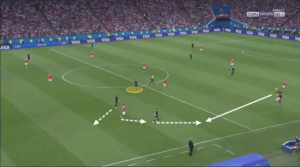 It was ruthless from the Croatian’s but it’s a very simple goal to concede from a Russian point of view.

The Croatian coach Zlatko Dalic made an important change around the hour mark when he replaced Perisic with his Inter teammate Marcelo Brozovic. Brozovic has had a good tournament and probably expected to start in midfield. He went into a defensive midfield position behind Modric and Rakitic as Croatia changed from 4-2-3-1 to 4-3-3. All of a sudden Croatia had a numerical advantage in midfield (though it only lasted a few minutes) but more importantly, it allowed Modric or Rakitic to push on and pick up spaces between the lines. An example is below as Modric moves into a higher position. 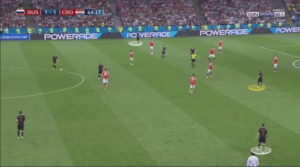 The image also highlights the high positioning of the two full-backs who maintain width while the front-three of Rebic, Kramaric and Mandzukic picked were very fluid and interchanged positions. Here Croatia all of a sudden have much better positioning of their players within Russia’s structure compared to the early parts when they mostly stayed outside of it.

In the below image we see how Croatia manage to break Russia’s midfield line with a pass from Brozovic into Rakitic. 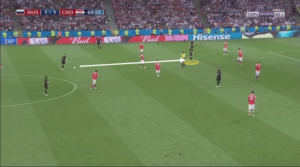 Russia quickly adapted to Croatia’s formation shift by changing Golovin’s position as he now dropped into midfield to create a 4-5-1 when defending and equal the numbers in midfield. Despite this, they had issues with Croatia’s positioning of players between the lines which is highlighted below by Kutepov being caught in two minds of pushing onto Kramaric or picking up the run of Rebic. 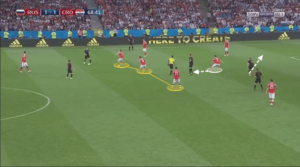 Throughout the second half and then in extra time, the influence of Luka Modric grew. The Croatian playmaker started slowly but he just got better and better as the game went on. He always kept moving and picked up intelligent spaces. He made himself available and never hid from the ball and his passing was as good as ever. Additionally, he pressed with energy and worked tirelessly as Croatia struggled physically with Mandzukic barely able to move towards the end with all changes already made. As the captain, he’s already led his team to a remarkable success by reaching the last four, but if he can inspire them to reach the final then he’s surely a legitimate candidate for the Ballon d’Or. Thankfully Croatia are guaranteed two more games so we have at least three hours to enjoy this phenomenal player.

Russia gave it their all and their equalizer with five minutes left in extra time gave them momentum going into the penalties. But Croatia emerged victorious from the spot for the second successive game and reached their second semi-final. This FIFA World Cup 2018 have featured lots of surprises and drama and the semi-finals should be no different as Croatia and England with battle it out for a place in the final.