Yesterday, France proved just how fine the margins between victory and defeat are as they edged past Uruguay with a 2-0 win.

Over the course of the game, the absence of Edinson Cavani eventually took its toll on Uruguay who missed his presence up top.

As for France, they benefited from great detail by Antoine Griezmann whose stuttered run up to a free kick gave Raphael Varane the space he needed to head France into the lead. As the game progressed more space opened up in midfield to the delight of Pogba who took full advantage in the build up to Griezmann’s goal. 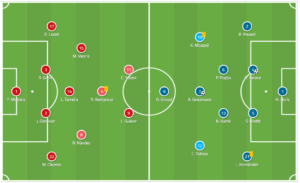 Looking at the teams both teams without two key men but other than that, lined up as expected.

Uruguay saw Cristhian Stuani replace Cavani next to Luis Suarez and kept their narrow, hard to beat midfield. We’ll see how these to aspects of Uruguay’s lineup effected the game below. France on the other hand were missing midfielder, Blaise Matuidi through suspension. A player who has proved to be vital as he helps bring balance to the French midfield playing on the left. He was replaced by Corentin Tolisso and we’ll also take a look at how that change effected the game.

As seen above, Uruguay’s 4-4-2 formation came with a narrow diamond shape in midfield. Something that had only seen them concede once in the World Cup before yesterday’s kick-off. With this they have been rightly credited as a very functional side as they play to their strengths and here’s how this worked in the first half against France.

This was a theme that occurred throughout the first half as Uruguay looked to make the game a tight one. For this aspect of their game, Stuani was an adequate replacement for Cavani as he was disciplined and dropped back into shape when needed.

However, without Cavani’s high work rare, Uruguay paid the price, as I’ll touch on soon.

Staying with the Uruguayan midfield though, and they weren’t just impressive when in their own half, but high up the pitch also. The example used below is something that happened quite frequently during the match.

No support for Suarez

As Uruguay’s approach was to hit France with counters this meant they suffered immensely without Cavani partnering Suarez. This was mostly because in the transition, there wasn’t much of a partnership between Suarez and Stuani.

This is because as Suarez dropped to get onto the ball and create, not only was he starved of options due to Uruguay’s lack of numbers up front but Stuani’s movement was not good enough either.

Even though Uruguay were outnumbered on most of their visits to the France box, the absence of Cavani proved to be vital. Compare Stuani’s movement here to Cavani’s in Alex’s piece and you’ll see how much of an effect the PSG man can have on this team. But let’s move on to France.

When Tolisso struggled for France

For most of this tournament, we’ve seen France vary between their favoured 4-4-2 and a 4-3-3 and that was no different yesterday despite the inclusion of Tolisso. In defence, he held his own as he slotted into the left midfield of a 4-4-2 with Mbappé dropping into right midfield. In possession, however, he’d tuck in as Mbappé returns upfield and Griezmann floats behind both strikers (as seen below). This had varied success over the course of the game.

Here we see the downfall of missing Matuidi for France as they lack a general balance in attack. With Tolisso more likely to tuck in and drift infield rather than create overlaps, more often than not this leaves Hernandez with few options when on the ball.

However, with the left-footed Matuidi back from suspension after this game we should see more overlaps in the semi-final against Belgium, putting doubt into whichever defender is forced to cover that space.

When Tolisso shone for France

We did see a massive advantage of having Tolisso on the pitch, however, and that was similar to the Australia game. It gave Pogba space to exploit. As we all know, Paul Pogba can at times can be the best player on the pitch and that’s just what he was in the build-up to Griezmann’s goal.

Here we see how the use of the 4-3-3 system can work wonders once in control of a game, as with the right midfielders you can find great pockets of space to exploit. However, this happened rarely at 0-0 so looking towards France’s semi-final it’ll probably be best that Matuidi returns to the side to give France what’ll be a much-needed balance in defence and attack.

Overall, when Uruguay were playing in the conditions that they wanted to play in, they were very efficient and were getting what they wanted from the game. However, without Cavani to support Suarez they had no real chance of sustaining attacks. For France, the performance wasn’t fully convincing but thanks to that stuttered run up from Griezmann and the space created by Tolisso and Pogba, they will be staying in Russia for a bit longer.