France versus Argentina was a meeting of traditional international heavyweights, and it did not disappoint in terms of brilliant moments and goals. The two sides traded blows for much of the match, though both were let down by poor attacking plans.

Ultimately, Didier Deschamps’ France were able to overcome their opposition with a tense 4-3 win. Here we break down how the game was won and lost. 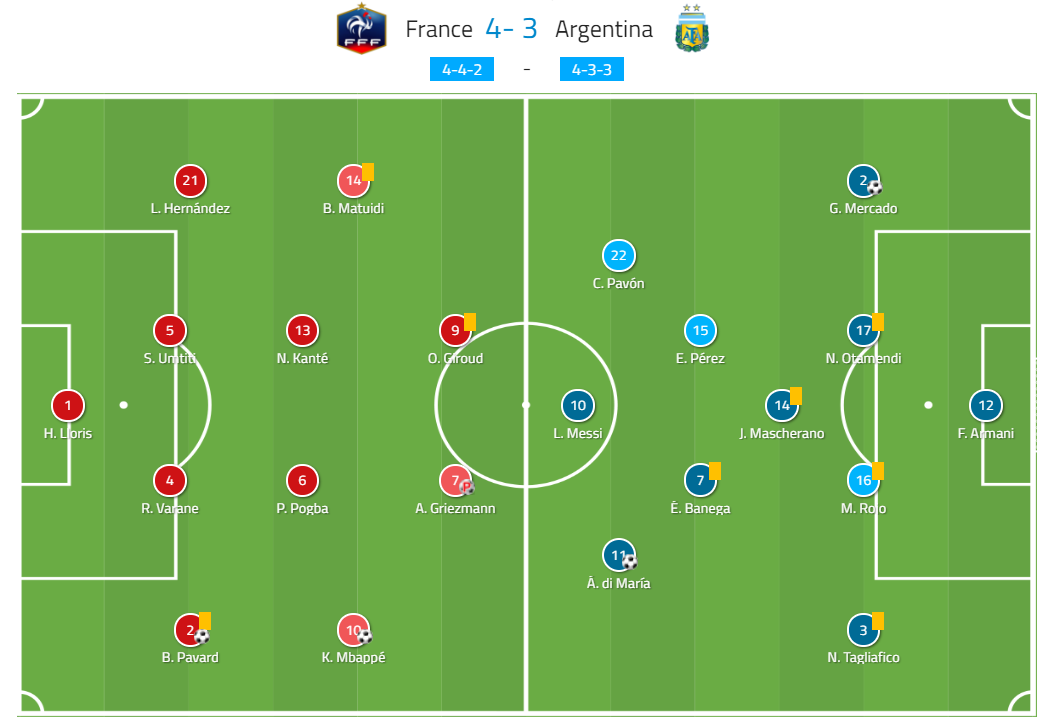 Deschamps set his side up in a fluid 4-4-2 shape that often looked more like a 4-3-3. Kylian Mbappe was deployed on the right wing and oscillated between the right-hand side of the midfield four defensively and being part of a front three with Olivier Giroud and Antoine Griezmann offensively.

Blaise Matuidi was utilised on the left of midfield, while the French full-back pairing of Benjamin Pavard and Lucas Hernandez was restored, with Djibril Sidibe and Benjamin Mendy sitting on the substitutes’ bench.

Jorge Sampaoli lined his Argentina up in a 4-3-3 shape, though he left out both Gonzalo Higuain and Sergio Aguero. Without a natural striker, Lionel Messi was deployed as a false nine, with Cristian Pavon and Angel Di Maria on the right and left wing respectively.

Usually, a zonal defensive approach in football involves recognition of four reference points: space, the ball, the opponent, and the teammate(s). On this particular occasion, France were mainly man-oriented, though they also had another important defensive reference point: Messi.

Their midfield four was often lopsided, as Matuidi on the left tucked in deeper and more centrally while Mbappe stayed higher and wider on the right. This was because France recognised both the threat Messi poses and the areas he tends to take up. The Barcelona man has always preferred cutting in from the right-hand side, from the wing or the half-space, onto his favoured left foot. So Matuidi tucked in and, next to N’Golo Kante, compressed the space available to Messi in these areas, as shown below. At times, Kante would focus specifically on Messi, dropping well beneath the France midfield line or adjusting his body position so as to remove the Argentine icon as a viable passing option. 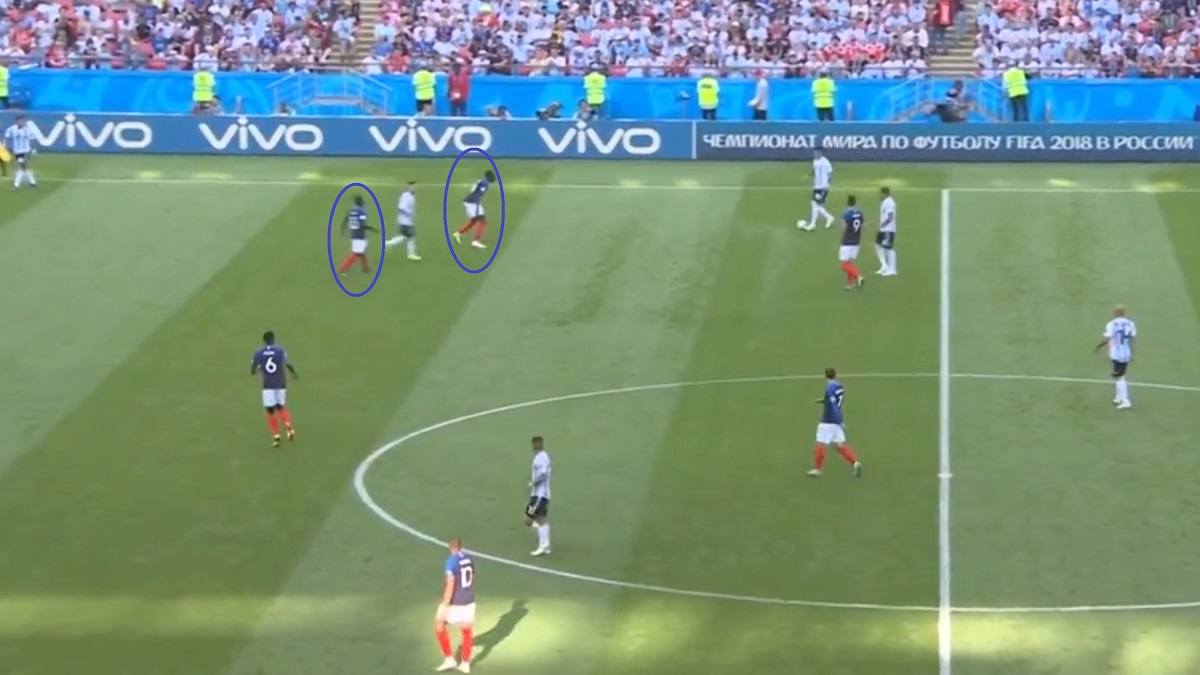 The two banks of four in France’s 4-4-2 shape offered little space between the lines. This came as part of an overall defensive strategy focused on maintaining compactness, with Giroud and Griezmann rarely pressing Argentina’s first build-up line and instead shifting laterally to block the centre and gain access for pressing should one of the Argentina defenders step forward with the ball into the middle third.

Argentina once again changed system for this match, going with a 4-3-3 false nine attacking shape that they had yet to use at the tournament. This was a tactical experiment that promised much but delivered very little.

Sampaoli’s side were able to establish control of possession fairly comfortably due not only to France’s decision not to press their first build-up line but also due to the fact both full-backs – Nicolas Tagliafico and Gabriel Mercado – stayed deep in the build-up. This provided stability numerically and also through reducing the distances between players in the Argentina back four when establishing possession. 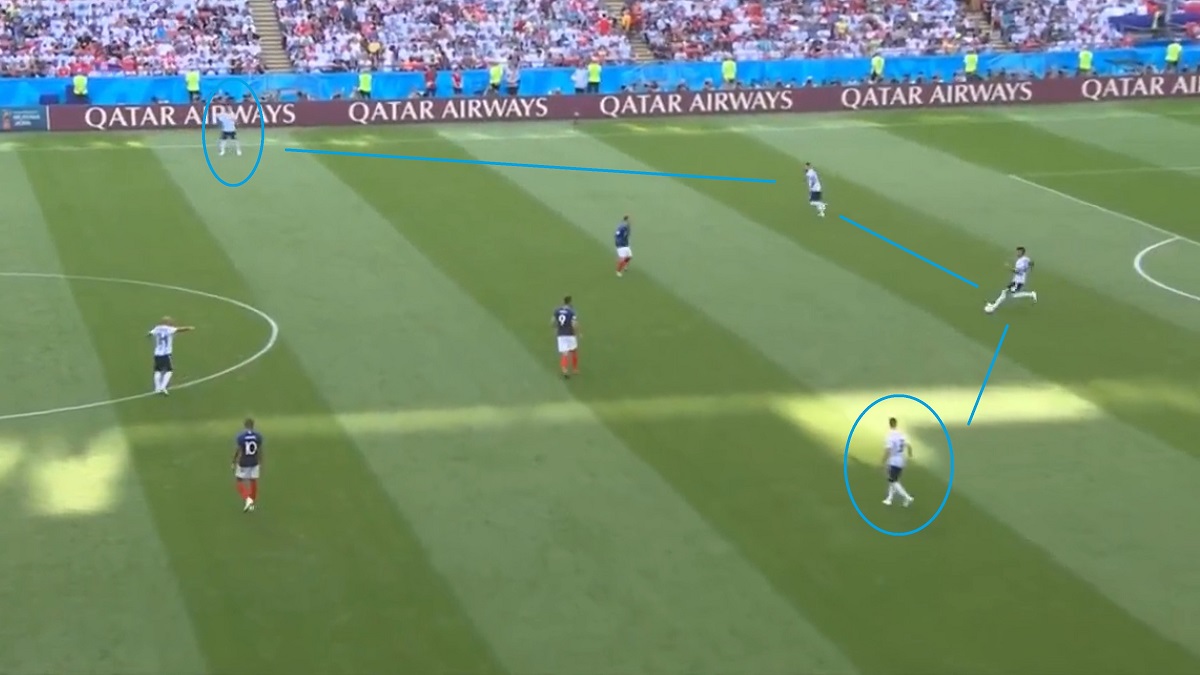 Messi was free to roam in order to create space for himself, overload certain areas if possible, get on the ball from deep and, hopefully, distract defenders and create space for others behind. But France’s compact shape was not for shifting, and they rarely looked troubled by Messi’s movements.

Part of the problem for Argentina was that their wingers stayed wide too often. With Messi moving away from the French centre-backs, both Pavon and Di Maria should have been targeting the space in the channels between the French full-backs and centre-backs with diagonal inward runs, but such runs rarely occurred. Consequently, the France centre-backs were completely free and the full-backs did not have to worry about runs in behind them. Everything was happening in front of, or to the side of, the French defence.

France experienced difficulties breaking down deep defensive opposition in the group stage, so it was a relief for them here to face an Argentina side that gave them space to run into, particularly in attacking transition.

As seen below, Argentina’s defensive approach was a man-orientated one. They set up in a 4-5-1 medium block with the wingers discouraging passes to the French full-backs and one of the central midfielders stepping up to press their opposite man when he got on the ball. 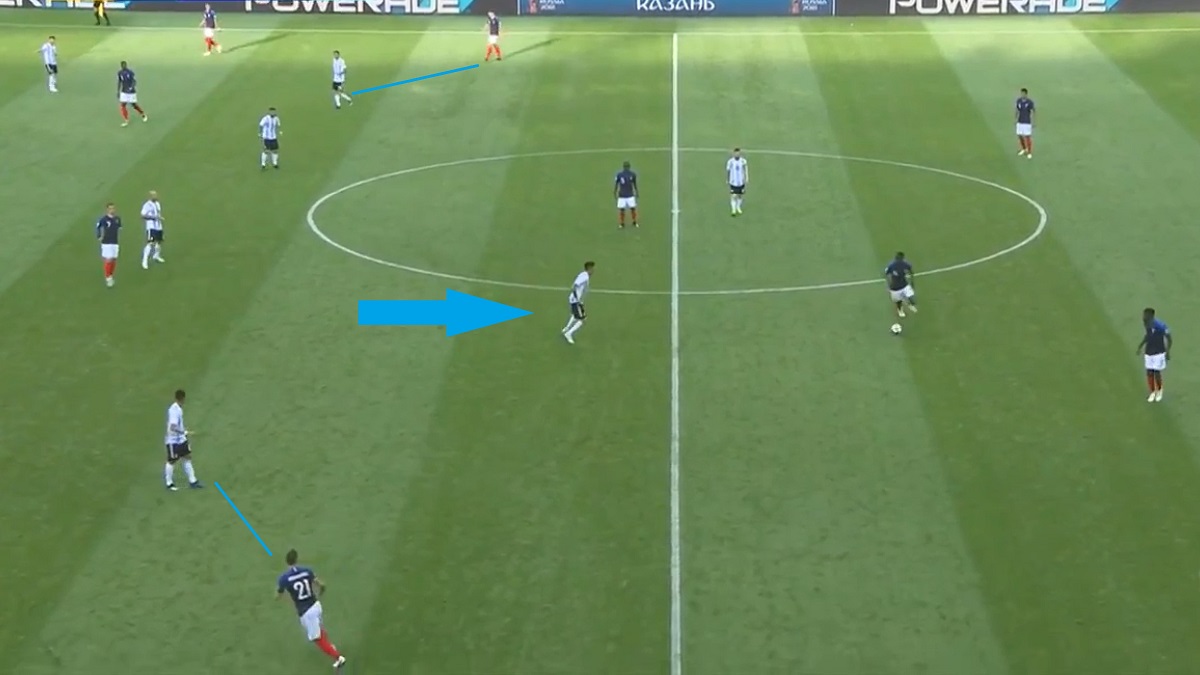 France’s 4-4-2 defensive shape morphed into more of a 4-3-3 offensively, with Mbappe interacting more with Giroud and Griezmann. The full-backs, Pavard and Hernandez, provided the width necessary to allow the front three to operate more centrally and with greater dynamism. Meanwhile, Kante often dropped back to create numerical superiority in the build-up, something that was particularly vital against the high press Argentina used when France passed backwards.

There were some nice opposite movements within the front three at times to create space and help progress possession. One example of this is seen below. Here, Giroud peels off the frontline; simultaneously Mbappe runs forward to try and move beyond the Argentina backline. Argentina go with Mbappe, freeing up space deeper for Giroud to receive between the lines. 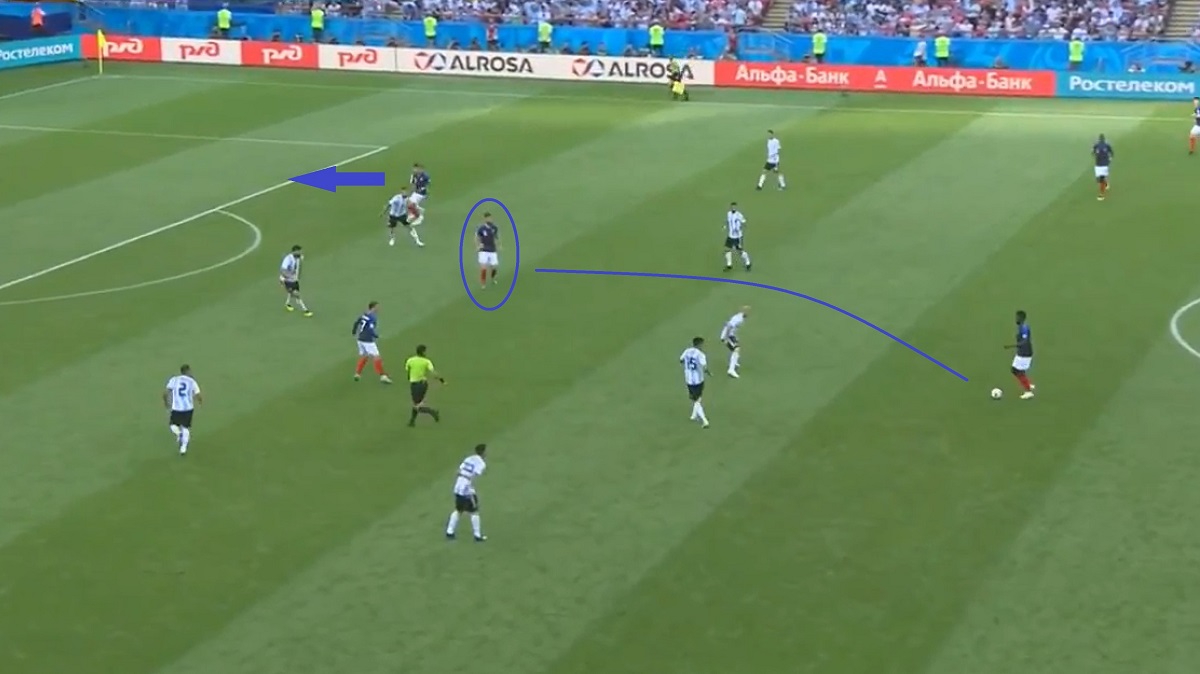 Generally, France’s best attacking opportunities came in transition, where they looked to exploit the pace and skill of Mbappe and Griezmann as quickly and as often as possible. Deschamps’ side were direct in these instances so as to get their best attackers into one-on-one situations against a disorganised Argentine defensive line. This is what led to their opening goal, as Mbappe received, ran directly at Rojo, beat his man, and was brought down inside the penalty area.

France showcased their phenomenal speed and skill in attacking transition once again here, though they will need to show more precision and attacking cohesion in their next match against Uruguay if they are to have any chance of reaching the semi-finals.