After the unexpected elimination of Spain, Croatia and Denmark both had the opportunity to reach quarter-finals and lay the foundation of a historical World Cup success.

Both nations were able to reach quarter-finals in 1998 for the only time. Whereas the Danish squad lost their quarter-final, the Croatians went on to finish third. Yesterday both were looking to repeat or even surpass their biggest success.

Both teams bank on established systems 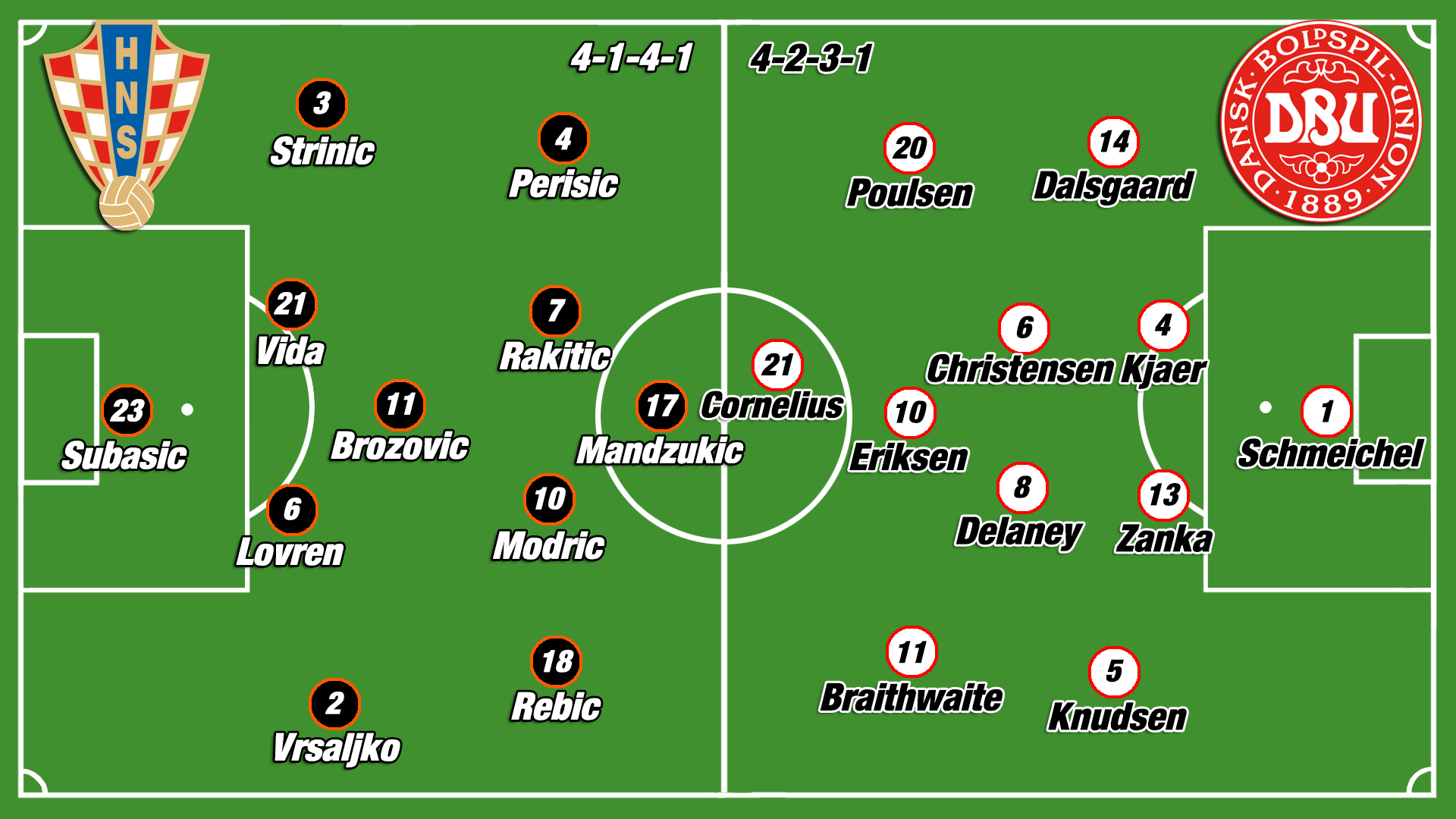 Croatian coach Dalic lined up exactly like in their 3-0 win over Argentina. Using a 4-1-4-1 shape which occasionally turns into a 6-3-1 out of possession in their own half. Mandzukic acted as a target man for long balls or crosses whereas Rebic and Perisic played narrow. Rakitic and Modric rendered the Croatian side a special touch with their creativity.

Denmark’s line-up was not much of a surprise. The Danish side lined up in a 4-2-3-1 with Christensen and Delaney in a double pivot. Jonas Knudsen at left-back was the only unexpected player of the Danish starting-XI since he made his World Cup debut. His most dangerous weapon: Throw-ins.

The foregoing mentioned weapon of debutant Knudsen lead to the first goal after 57 seconds played. Croatia were figuratively hit between the eyes by a long throw-in and the resulting goal scored by centre-back “Zanka”.

Even though one could call conceding such an early goal a “shock”, the Croatian side showed a good reaction and kept following their strategy with success. Croatia were able to make the break-through down the right wing. This was the moment when Christensen was literally hit between the eyes by a bad clearance of Dalsgaard. The quick-thinking Mandzukic took the opportunity and scored the equaliser more down to luck than anything else.

The two goals happened due to a lot of coincidences and indistinct defending on both sides. From then on, the game became stuck in midfield and far away from becoming a goal fest. Finally, penalty shootout, often described as “luck of the draw”, had to determine the winner of a match with few highlights. 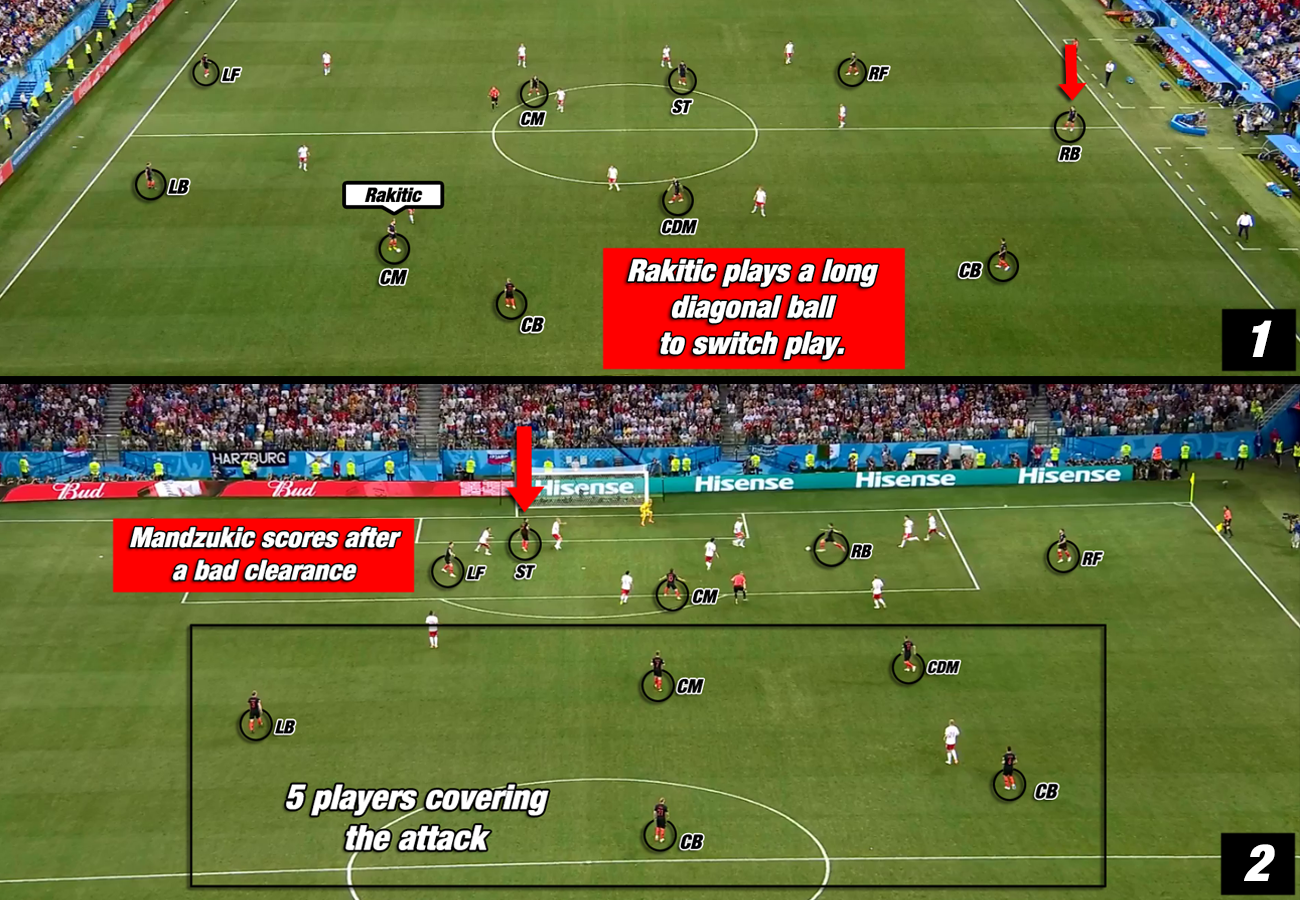 Croatia often used one of their central-midfielders in a full-back position to build up play. Their main strategy was to penetrate the Danish block on the wing and to take crosses for Mandzukic, Rebic or Perisic. After progressing up the pitch Modric and Rakitic moved higher to be able to gain second balls. Thereby Croatia always kept enough cover with at least four players to prevent any counter-attacks. However, Denmark did not struggle to defend the crosses except for the equaliser of Mandzukic. This underlines that Croatia depended too much on the mistakes of the opponent’s defence. Moreover, it is another reason why the game remained goalless after the opening five minutes.

Dalic’s squad sometimes tried to press Denmark in their half, occasionally with Modric or Rakitic supporting Mandzukic forming a 4-3-3. The winger on the far side of the ball dropped low to support the midfield. Most of the pressing players used their cover shadows to shut down short passing options. After regaining possession, a quick counter-attack was started taking the fastest way to the Danish goal.

When Denmark were in possession in the Croatian half, Croatia would defend with an extremely low and flat block. Rebic and Perisic would drop in order to mark the opponent’s full-backs. This occasionally formed a back-six behind the central-midfielders and striker Mandzukic defending in a diamond shape. Especially in the moments when Eriksen drifted towards the wing, dragging Brozovic out of the centre, Croatia couldn’t close down the space in front of their last line. 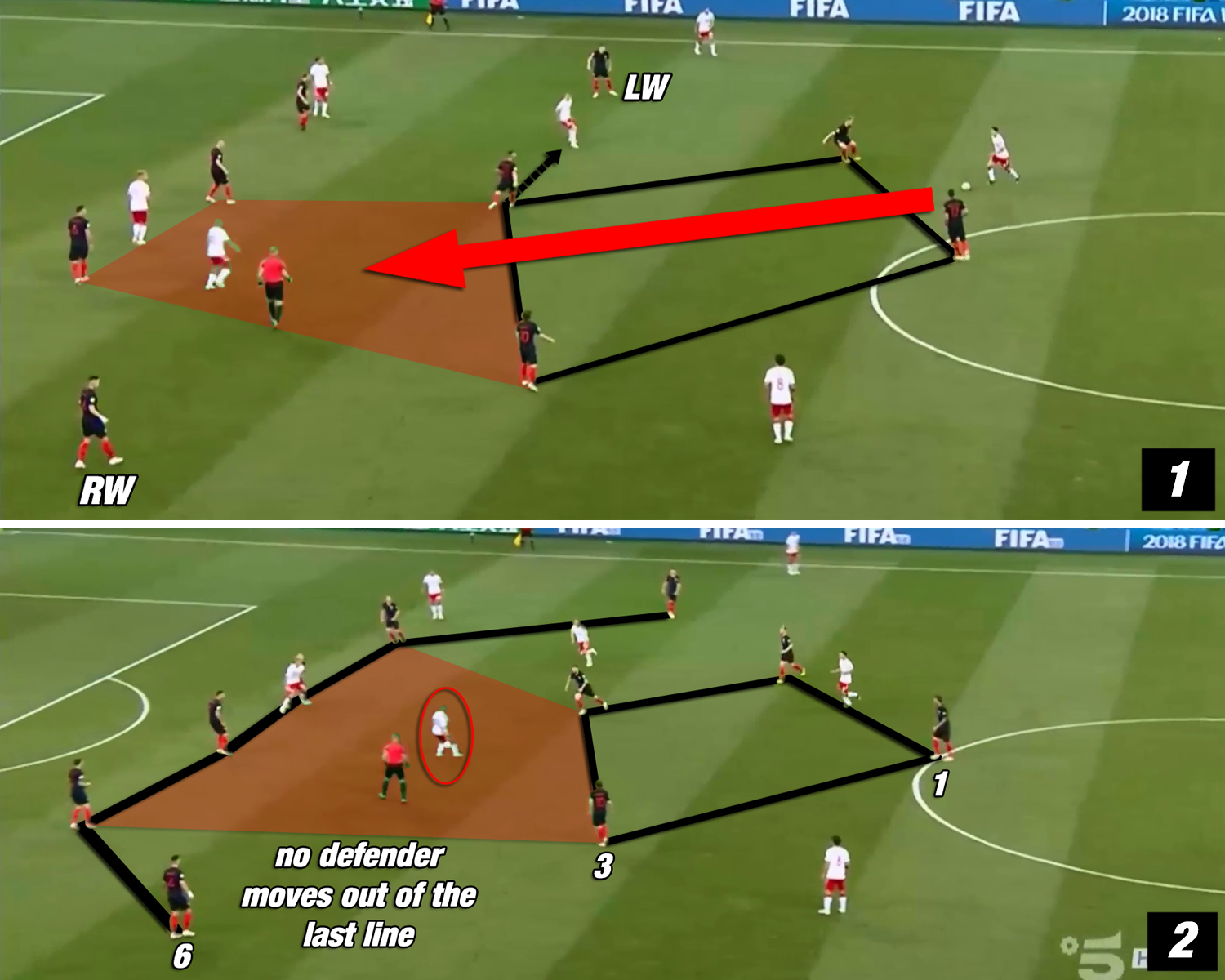 Centre-backs and fullbacks held their position giving Danish attackers the opportunity to receive and turn in a dangerous areas. Eriksen and his team mates were able to create few chances that way. However, the Croatian defence went unpunished.

Denmark with a tribute to Iceland 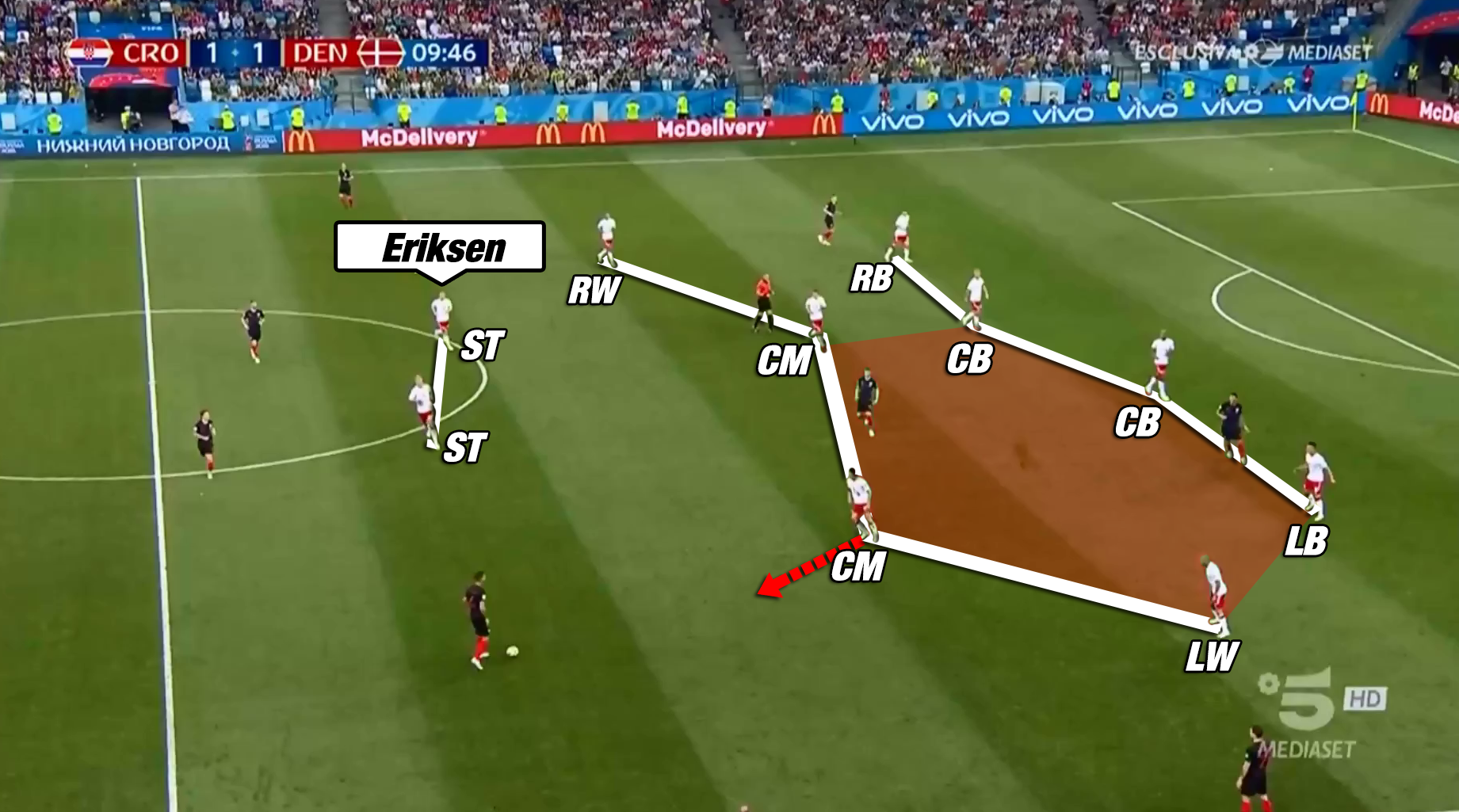 The Danish side tried to disrupt the Croatian build-up by mainly pressing the key players Rakitic and Modric. Denmark chose a 4-4-2 formation in defensive formation. Delaney and Christensen as the central-midfielders applied pressure when the ball was in the half spaces. As a consequence the gap between midfield and back-four increased. In some situations Croatia was able to reach this zone after playing a ball on the wing, often missed the last pass though.

The attacking strategy resembled the way Iceland performed. Head-coach Hareide used every throw-in to get to the ball as close as possible to goal. After regaining the ball, the Danish squad tried to get behind Croatia’s defence as quickly as possible. Feeling the slightest form of pressure the Danish would play a long ball. Since Croatia kept distances in midfield short, they were able to win most of the second balls. 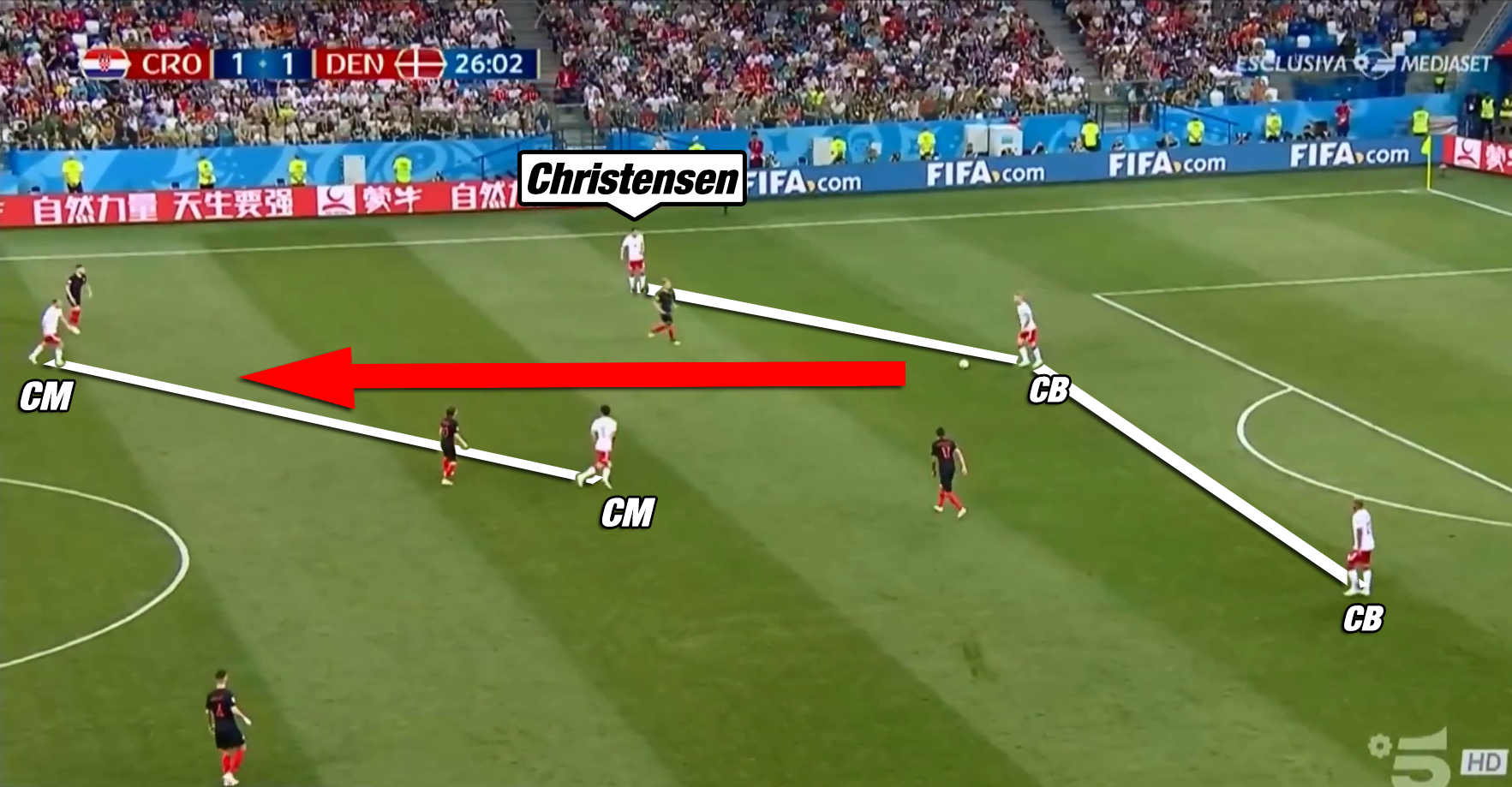 In the very few moments of build-up play, Christensen dropped into the right-back position when Dalsgaard moved up the line. Eriksen and Delaney provided short passing options to break the first line.

Further up the pitch, Braithwaite tried to receive the ball centrally in the back of the Croatian midfield and Poulsen in the right half space. Therefore, most of the attacks went over the right hand side and thereby were quite predictable.

To sum up, two defensive thinking teams, missing fortune and penetrative power in attack prevented the match from becoming a goal fest.

Denmark did well during this World Cup. However, a well-structured defence and an attacking style relying on long balls and the individual quality of some players is not enough to reach the quarter-finals.

Dalic and his players have found a concept to cover their attacks in a way the reigning world champion Germany and other huge nations did not. Therefore they are the worthy winners and they might be able to get far in this tournament. Croatia are well prepared to transition from attack to defence and the other way around. Due to this, Croatia will be a tough nut to crack for their next opponent(s) and might have the chance to prove their role as favourites, secret favourites or however you wanna call them.