France and Denmark entered their World Cup group stage clash knowing full well that a draw would send them both through to the knockout rounds. This knowledge manifested itself into an uninspiring game that has since been widely accepted as the worst of the tournament, as well as the competition’s only 0-0 draw so far.

Didier Deschamps’ French side did little to suggest that they are finding cohesion on the job, as they did during their run to the Euro 2016 final, while Age Hareide’s Danish outfit looked bereft of ideas, particularly on the ball. Nonetheless, there were, as always, some interesting tactical tid-bits to keep the neutral engaged – if not entertained – which we will analyse here. 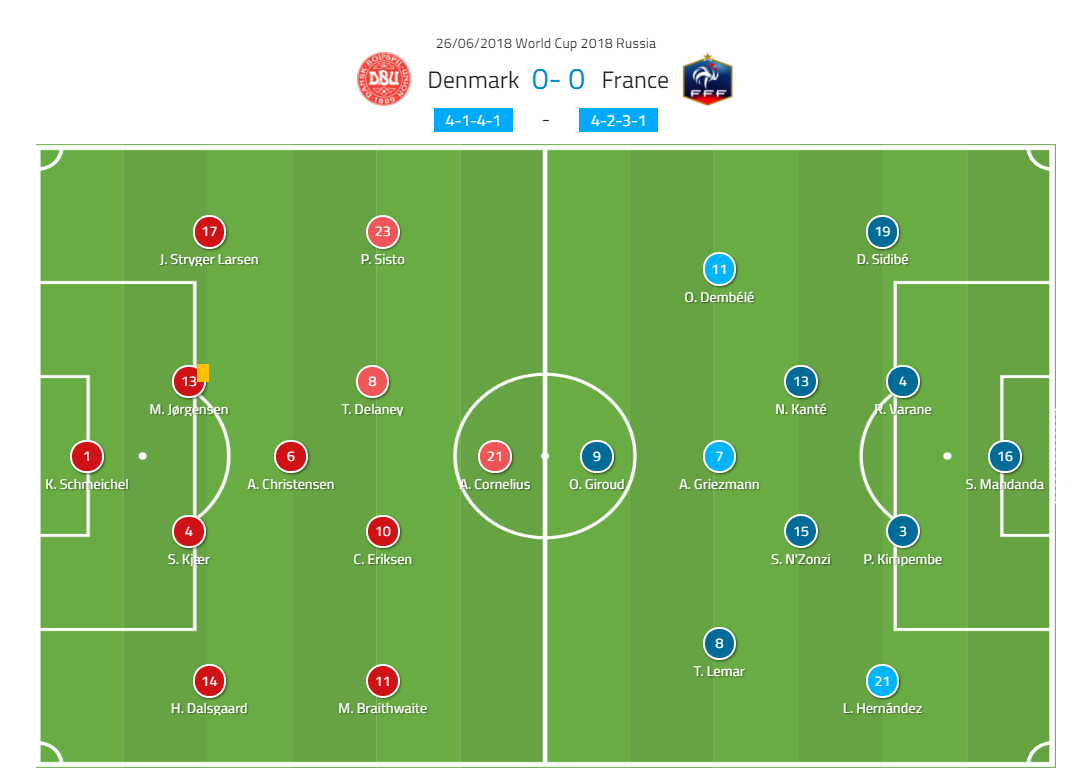 With progress to the round of 16 already secured, Deschamps took the opportunity to experiment not only in terms of personnel but with his formation. Having favoured a rough 4-3-3 for France’s previous two matches, he implemented a 4-2-3-1 for this game. Several key players were rested, namely Hugo Lloris, Samuel Umtiti, Paul Pogba, Blaise Matuidi, and Kylian Mbappe. Steve Mandanda, Presnel Kimpembe, Steven N’Zonzi, Thomas Lemar and Ousmane Dembele took their places respectively.

Denmark didn’t opt for a change of basic formation, sticking with their 4-5-1. However, the introduction of Andreas Christensen to central midfield had the effect of changing the way they shaped up at times, particularly in the defensive phase. Mathias Jorgensen stepped into central defence to cover for this tweak. Elsewhere, Martin Braithwaite and Andreas Cornelius took the places of Yussuf Poulsen and Nicolai Jorgensen.

France attacked in a fluid 4-2-3-1 shape that saw N’Golo Kante partnered by N’Zonzi in central midfield. This pairing helped Deschamps’ side to establish controlled possession along with the two centre-backs and the two full-backs, though in truth they faced little to no pressure on the ball when building up from the back.

As had been the case in their opening group fixtures, France struggled to penetrate the opposition’s defensive block once the opposition dropped deep. Generally, there didn’t appear to be any pre-planned moves, and they were too easily forced into ineffective sideways passing – the infamous ‘horseshoe’ or ‘u-shape’ pattern, where the ball goes from wing to wing through passes back and sideways, appearing far too often.

One promising aspect of the French possession game was that they appeared to have some idea of how to work the ball into more dangerous spaces once in the wider areas. Consequently, they were occasionally able to work their way inside from the wings and half-spaces in the final third, as opposed to simply passing backwards and repeating the u-shaped passing sequence.

In the below example, Griezmann, playing a free role behind Olivier Giroud, plays the ball to Dembele, who has come inside from the right wing and attracted the Danish left-back out of his defensive line. Dembele immediately passes out to right-back Djibril Sidibe, while Griezmann runs into the space vacated by the Danish left-back to receive a diagonal through ball from Sidibe. 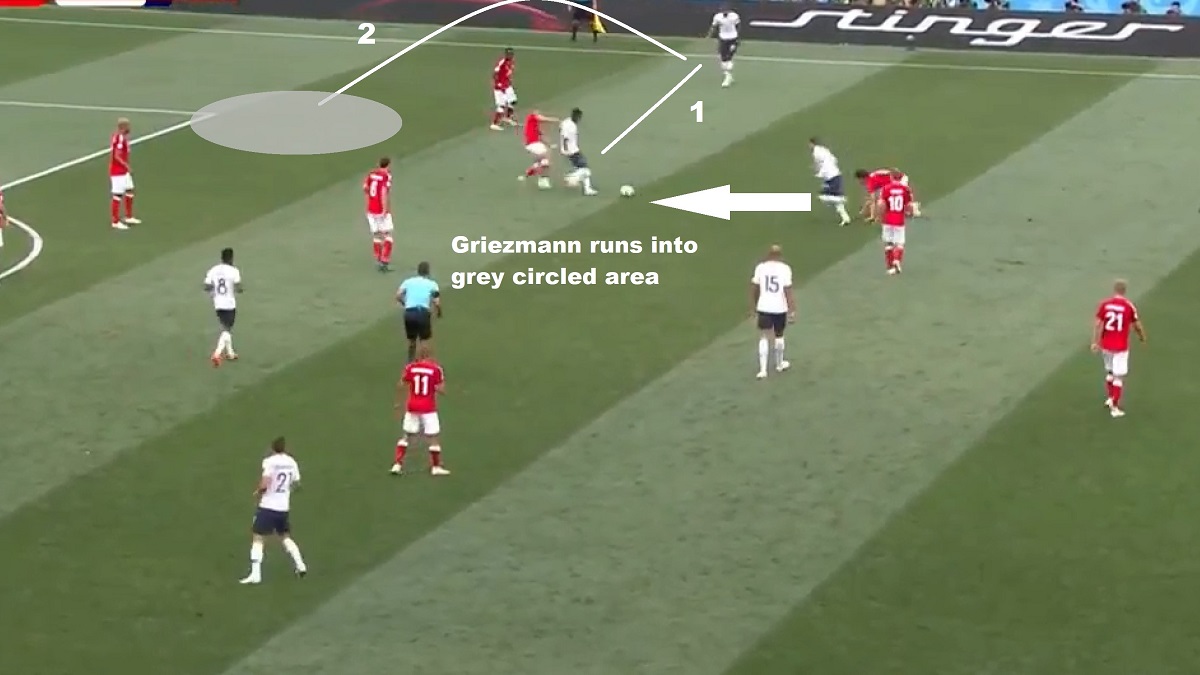 Below is another example of France successfully working the ball inside from wider areas. Here, Sidibe, having received a pass out from Griezmann, passes down the line to Dembele, who has retained a very wide position next to the touchline. Dembele passes inside to N’Zonzi, who has advanced from central midfield. Simultaneously, Griezmann makes a run to take away the Danish central midfielder, freeing up space for Dembele to receive a return pass from N’Zonzi inside. 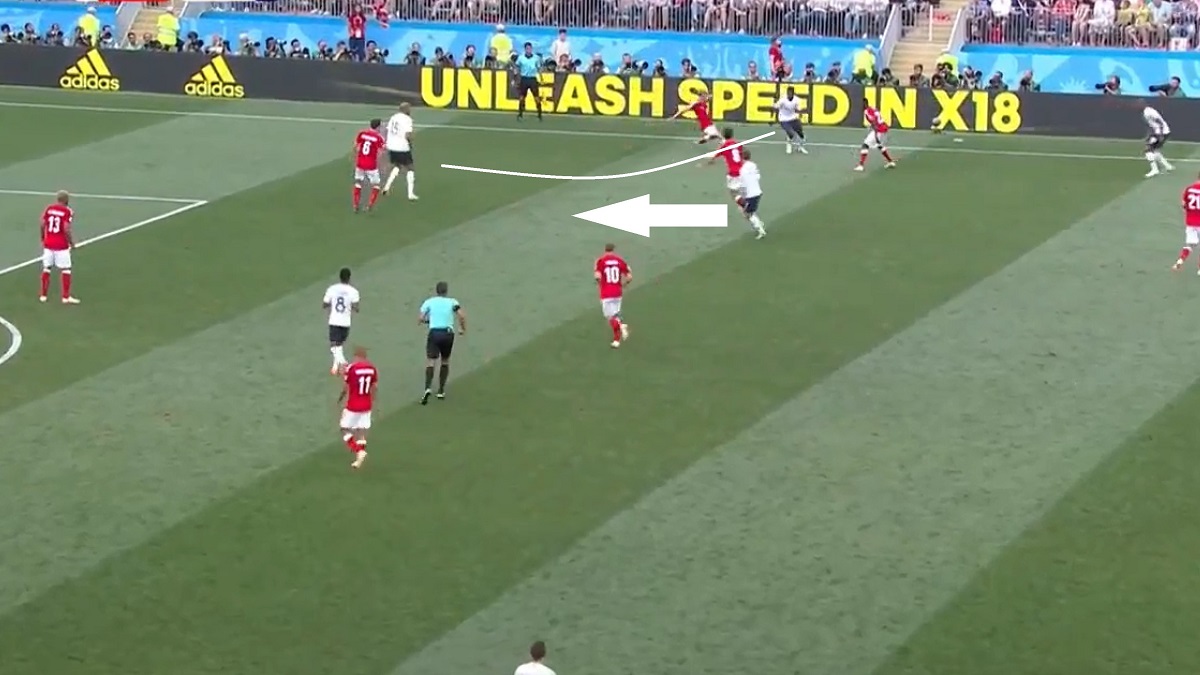 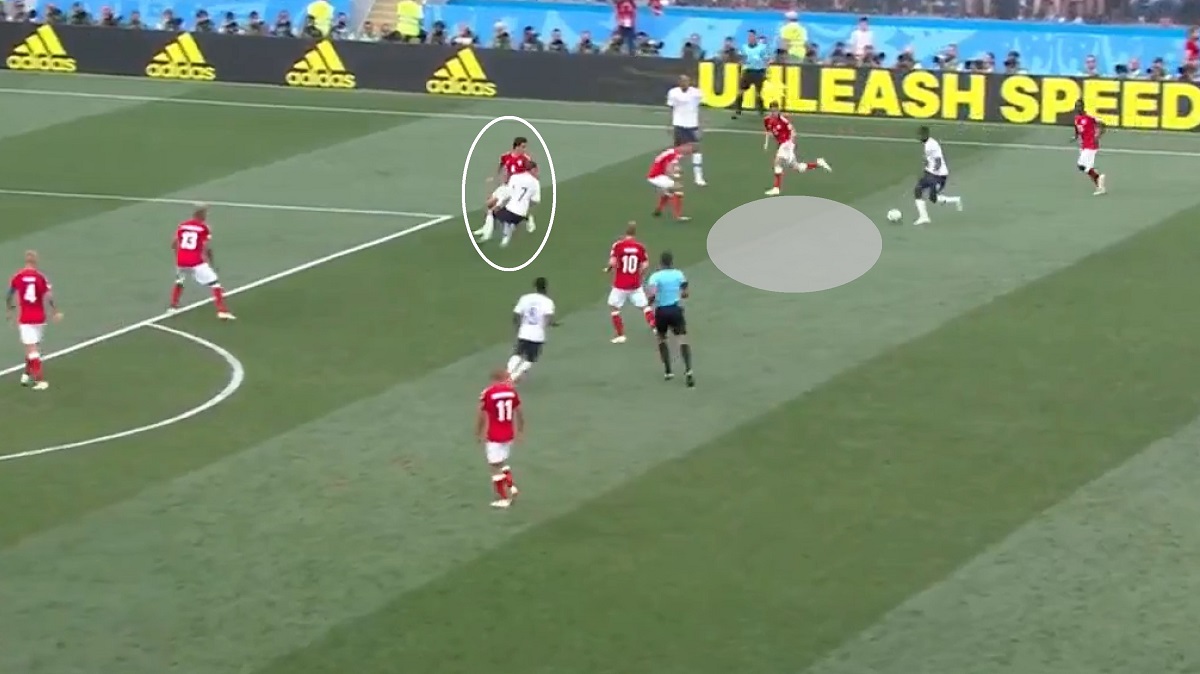 Aside from some instances of nice combination play in and around the wide areas, France found it tough to open up the Danish defence. However, in spite of the team’s difficulties, Lemar made a strong case for more involvement in the World Cup knockout stages.

The 22-year-old operated primarily in the left half-space, moving vertically and laterally to support build-up, combine with teammates and offer a line-breaking pass. Below is one example of the latter, as he moves on the blind side of the Danish midfield to get in behind and receive the ball between the lines. Unfortunately, his intelligent movement wasn’t always picked up on by those around him. 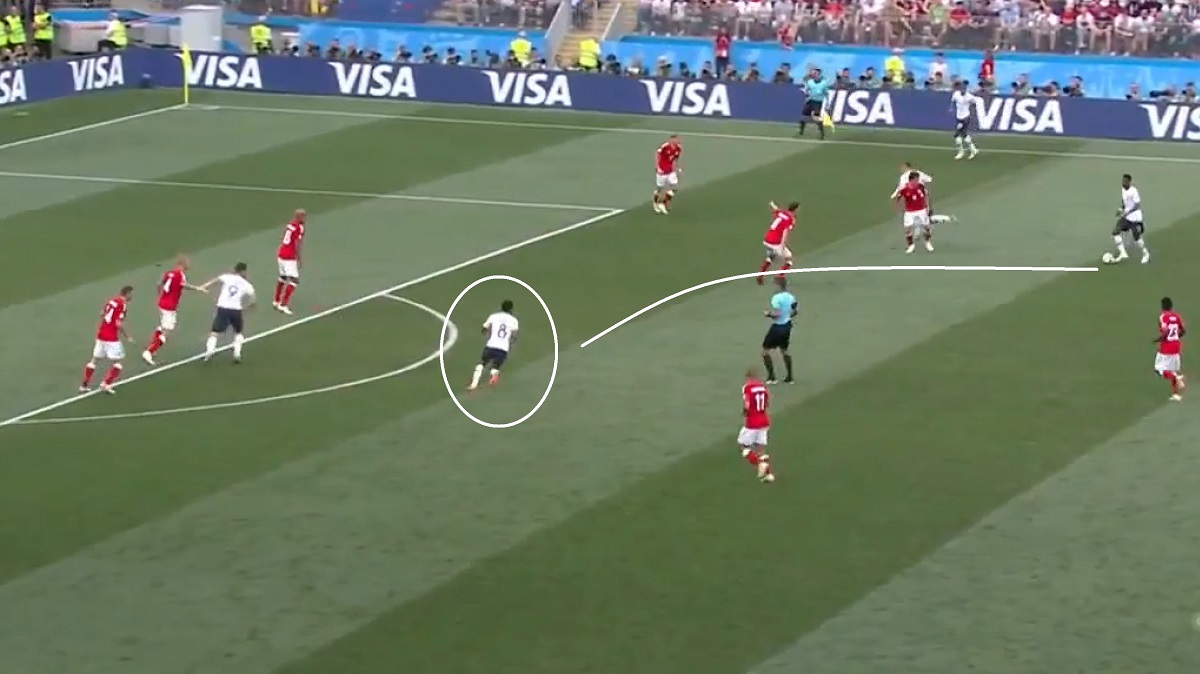 Denmark defended initially in a 4-1-4-1 mid-block, deciding against applying pressure to France’s first line of build-up. Instead, they looked to congest the centre before deploying man-orientated pressing in wide areas. One of their wingers would move out to press the France full-back in possession, with one of Thomas Delaney and Christian Eriksen providing support along with the Danish full-back nearest to the ball.

Christensen took up an interesting role between Denmark’s defence and midfield lines. While a centre-back at club level – and for the first two matches in this tournament – here he was used as a defensive shield. Generally, he marked space, adjusting his position to help block the centre and support Delaney and Eriksen from behind, however, he would also occasionally track a French player that wandered into his zone. The Chelsea man’s position, along with his team’s overarching defensive structure, is seen below. 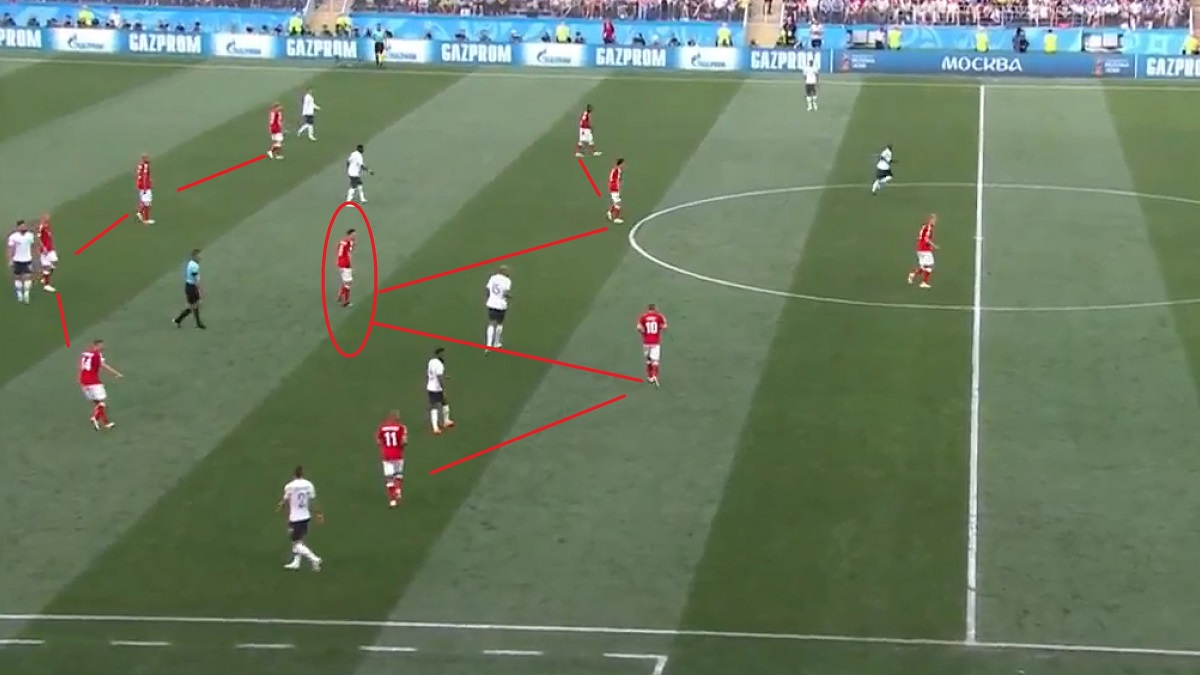 Hareide’s side often moved quickly into a low block, preferring to take away space for France to play into rather than press the ball and free up space behind to be exploited. This made them hard to open up, but they didn’t offer much of a threat of their own going forwards.

On rare occasions they actually attempted to play out from the back through short passes among the defence and midfielders, Denmark were able to bypass France’s press without too many issues. However, their preferred attacking strategy was to shell long balls towards their target man, Cornelius.

Denmark weren’t aimless in their long ball game – they did appear to have a strategy in place for winning the second balls and establishing possession in the opposition half. As seen below, when Cornelius went up for the header one player would run beyond him in case of a flick-on, while at least two or three other players – in this example the two wingers and an out of shot Delaney – would gather to the side and behind him in a bid to secure any knock-down or loose ball. 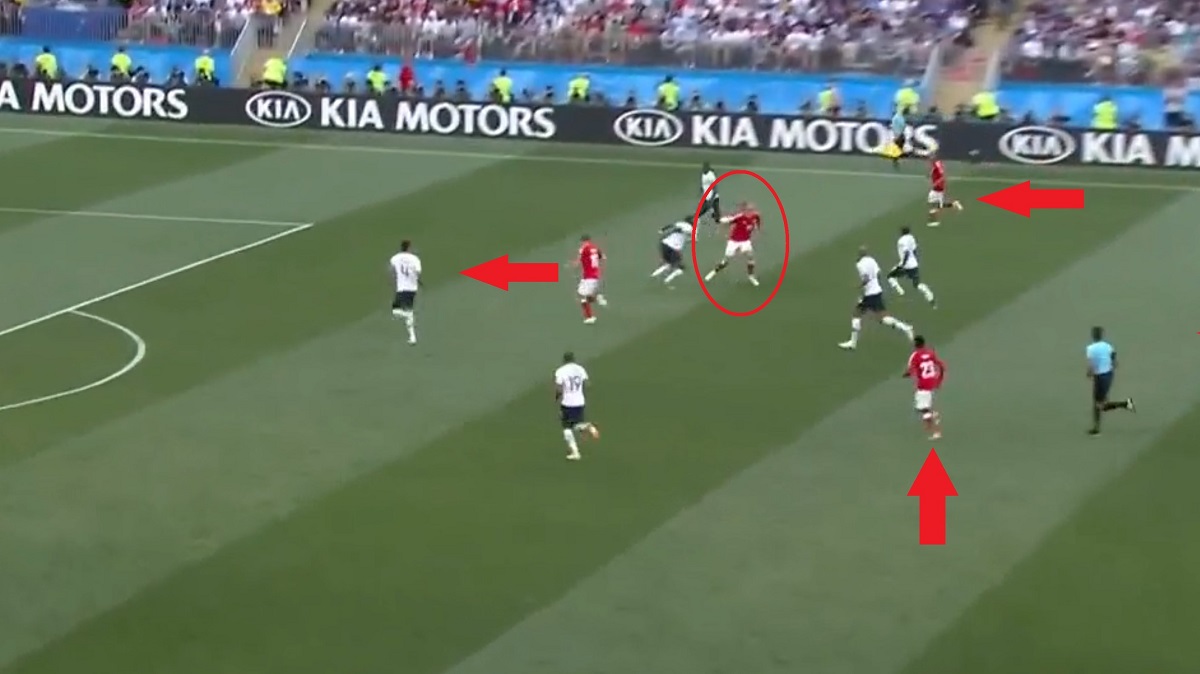 The upside of this direct approach was that it reduced the risk of giving the ball away deep in their own half and allowing France to counter high up the pitch using the pace and skill of Griezmann, Dembele and Lemar. The downside was that they struggled to build sustained possession and completely wasted the playmaking talents of Christian Eriksen, who rarely received the ball to feet in attacking areas.

Thanks to their draw here, France progressed as Group C winners before triumphing against Argentina on Saturday. This match looked disappointing as not only were Argentina woeful at times in the group stage, but France – as demonstrated here – are worryingly devoid of cohesion. But thankfully we got a wonderful seven-goal contest between international footballing giants.

As for Denmark, they had a clash with Croatia to look forward to. A game in which they fared well seeing as Croatia picked up maximum points in the first round. However, like in their match against France they offered little going forward other than set pieces over 120 minutes.