Germany went into their final World Cup Group F game against South Korea in the knowledge that victory would almost certainly seal their place in the second round. After defeat to Mexico, their late win over Sweden gave hope that Joachim Low’s side were on their way back to something approaching top form. However, this was not to be the case.

South Korea, who were once again well organised by head coach Shin Tae-yong, competed with the (former) reigning world champions and, securing an upset 2-0 win, denied them progress to the knockout stages. Here we analyse the game, including what went wrong for Germany on the day. 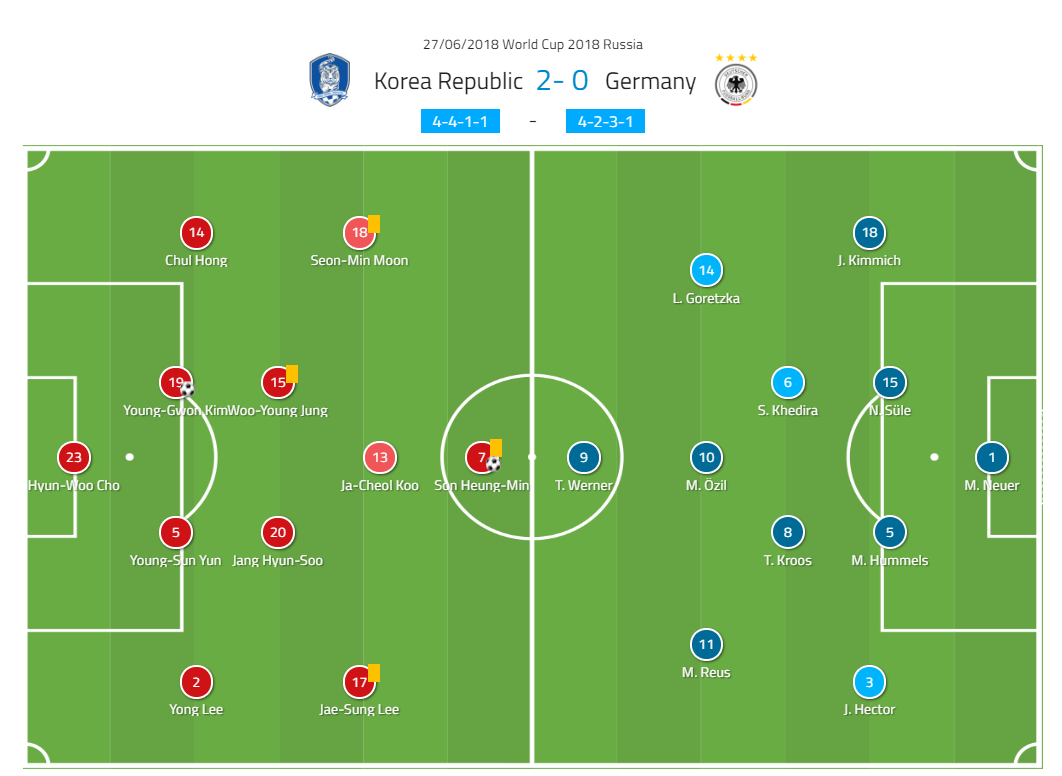 Low went for his preferred 4-2-3-1 system with Timo Werner leading the line up front. Behind him, Mesut Ozil was joined by Marco Reus and Leon Goretzka, with Thomas Muller dropped to the bench. There were no surprise selections in the midfield or back-line, though Niklas Sule did come in for the suspended Jerome Boateng at centre-back.

South Korea continued with the 4-4-1-1 system that served them well against Mexico, this time with Son Heung-min up front and Koo Ja-cheol providing support. Moon Seon-min added pace on the left-hand side of midfield, while team captain Ki Sung-yueng, missing out through injury, was replaced by Jung Woo-young.

SOUTH KOREA SET UP TO STIFLE

Shin set South Korea up to stifle Germany’s build-up through an extremely aggressive man-orientated pressing game. Shaping up defensively in a 4-4-1-1 or 4-4-2 mid-block with Koo supporting Son in the first line of defence, they mixed an attacking press with a high midfield press, generally looking to apply pressure on Germany before they crossed the halfway line and pressing Germany’s first line of build-up.

South Korea’s front two applied backwards pressing to help close down the opposition ball-player from multiple angles, and they were also more than willing to commit fouls in order to disrupt Germany. Hence, by the end of the match, four of their front six had picked up yellow cards, mostly for persistent fouling.

A recurring feature of South Korea’s defensive approach was that the far-side winger would often tuck in. This was done to retain some form of horizontal compactness while Jang Hyun-soo, the right-sided central midfielder, dropped back (at times as far as his own defensive line); however, the wingers’ movements also meant they had better access for pressing Germany’s central midfield duo. 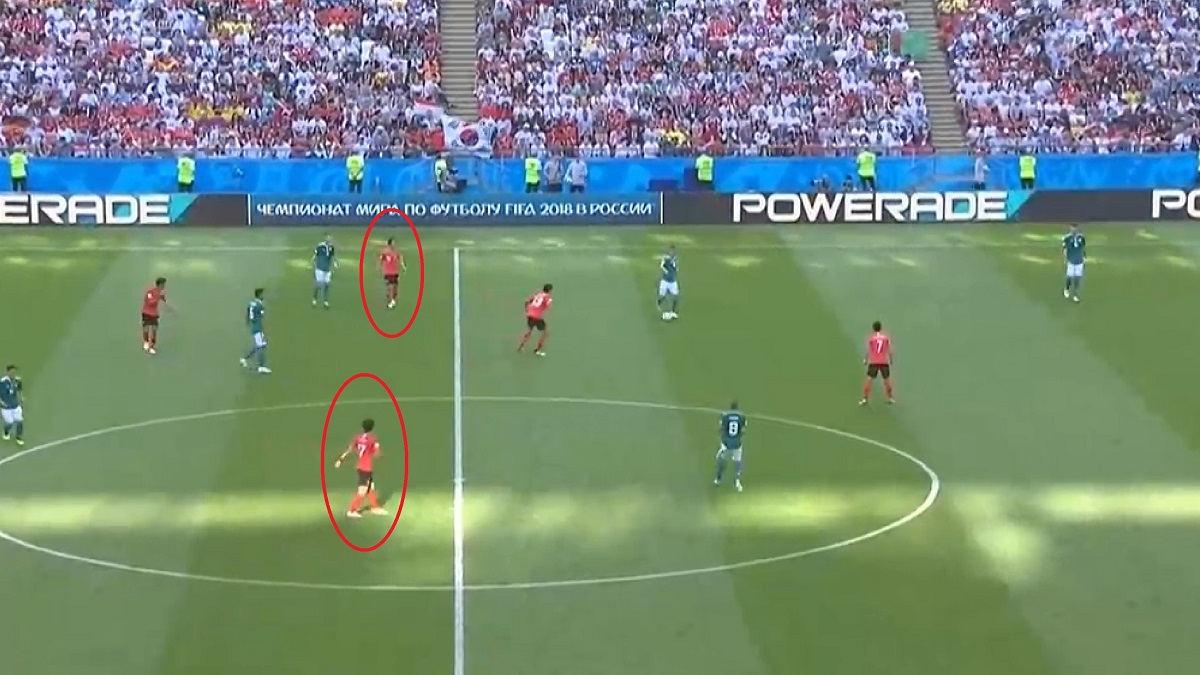 Having been counter-attacked ruthlessly and repeatedly during their first two group matches, Germany entered this game with a slightly more cautious approach during the build-up. Thus their central midfielders, Sami Khedira and Toni Kroos, often stayed very close to their central defensive teammates in this specific phase, presumably to ensure a good central presence in defensive transition.

Possession would be circulated among this back four of two central midfielders and two centre-backs, with goalkeeper Manuel Neuer also regularly involved to help outplay the South Korea press. Kroos would drop deep in the left half-space, from where he would look to receive possession and pass diagonally into the centre or towards the right-hand side.

One problem that became apparent fairly early on in the first half of this match was that Germany’s attacking setup led to an occasional disconnection between the back four and the front six (two advanced full-backs, three attacking midfielders and Werner). This made it difficult to build effective possession – the increased distance between players meant there was little possibility of combinations and also added to the risk of each pass out from the back being intercepted. 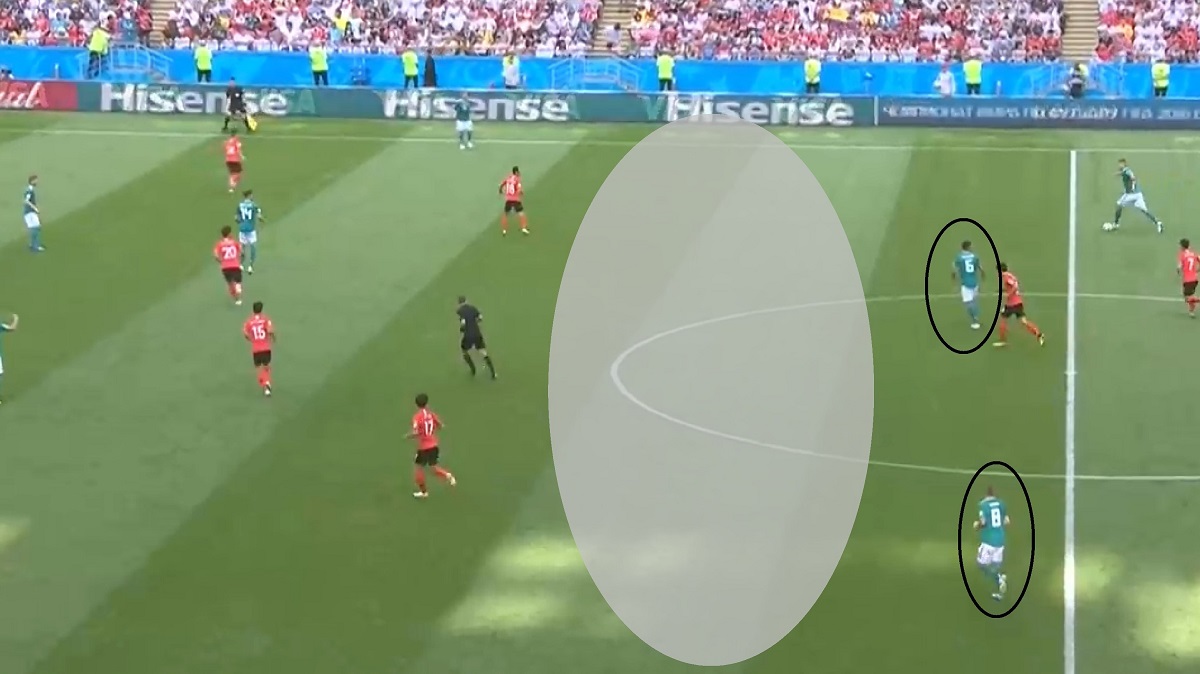 An example of this issue is seen above, where both central midfielders are virtually on the same vertical line as Sule. The only forward passes are therefore to one of the aforementioned front six, though to reach them he must break South Korea’s midfield line. In short, there are no easy passes and no methodical way of building attacks through the thirds.

While Germany’s attacking structure was far from perfect, Ozil offered hope with his movement to create space for himself and his ingenuity to break the lines and connect attacks. All in all, the Arsenal man made more key passes – seven – than any other player in this game.

Drifting vertically and laterally to offer a passing option, he was always looking to either support build-up or help to penetrate South Korea’s defensive block. Below, he stays high in the inside channel to receive a forward pass from Sule. From there, he lays the ball off inside to Reus, who progresses into space. 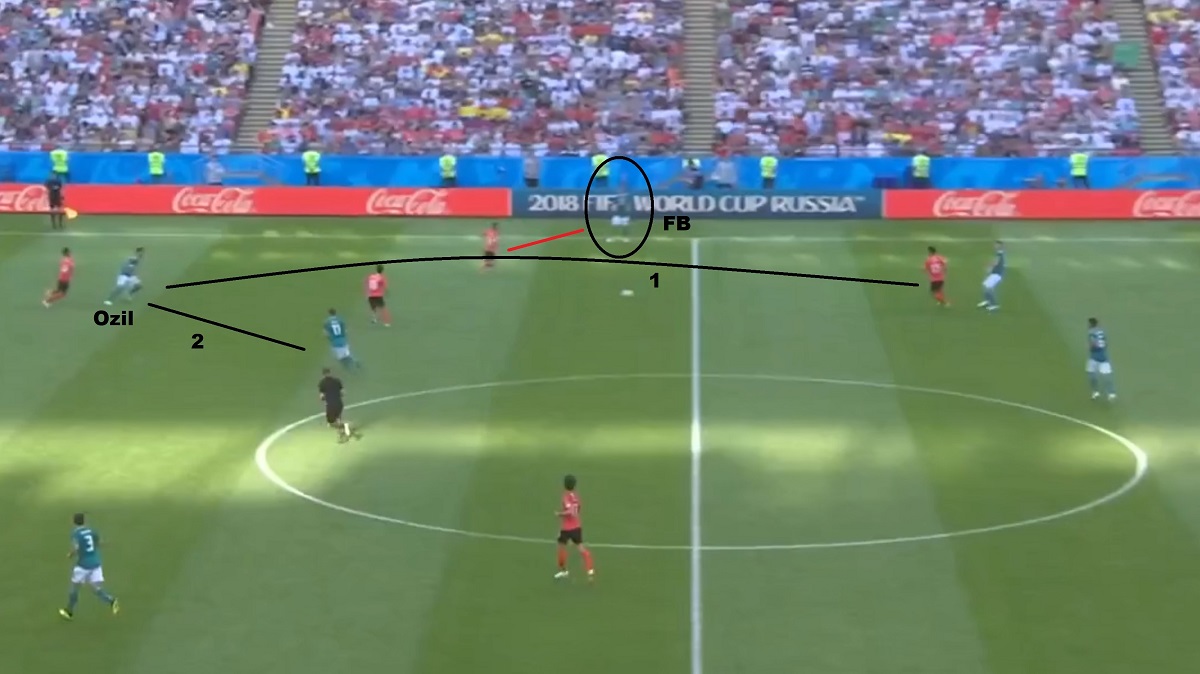 Also seen in the above graphic is another aspect of Germany’s build-up – the full-backs staying wide to draw out their marker and free up space in the inside channels for the attacking midfielders (in this particular case, Ozil) to receive.

As the match wore on South Korea became increasingly deep defensively and Germany struggled to break through. Consequently, a lot of German possession went wide to the full-backs to cross. Low reacted to this development by introducing Mario Gomez and Muller from the bench, sacrificing one central midfielder (Khedira) to gain greater penalty box presence and aerial threat.

Ozil, and Germany, suffered as a result of this switch. Asked to drop deeper, the playmaker was further away from the final third and thus his creativity, vision and intelligent movement between the lines were no longer being maximised.

South Korea’s best moments came in attacking transition, where they looked to counter-attack instantly and quickly through Son and their wingers. After Germany sacrificed a central midfielder for a centre-forward the game became more open and more space was made available to Shin’s side on the counter, though poor decision-making consistently cost them in the final third – they were able to create chances, but not so able to take them. 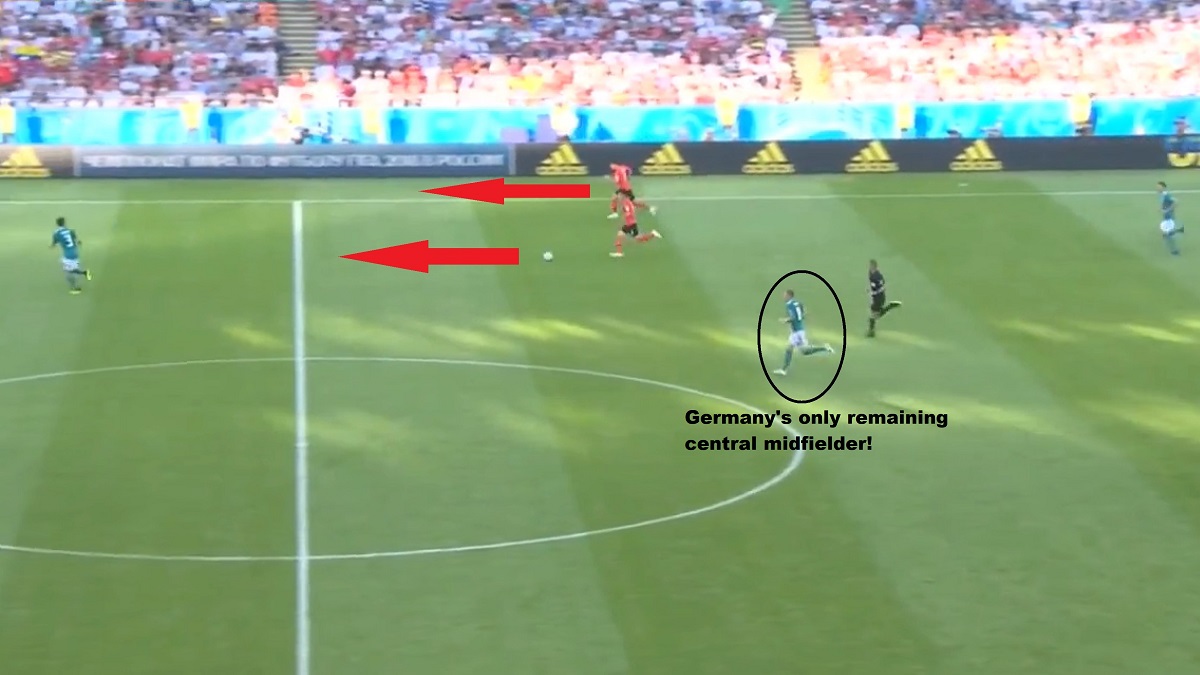 The above scene, amazingly, was taken from the 66th minute of the game. Even at 0-0, with just one goal needed and almost half an hour of play remaining, there was an air of desperation about Low’s tactical decisions that led to an incredible openness in defensive transition. This, along with slack counter-pressing and decreasing organisation – perhaps brought about through physical and/or mental fatigue – meant the match came to resemble a basketball game, with each side taking it in turns to attack or counter-attack the other.

Low’s approach to solving the problems posed by South Korea was quantitative, not qualitative. He gambled on a lucky bounce, or a striker finding space in the box, by attempting to overload the opposition back line with the introductions of Gomez and Muller. But this didn’t work out – South Korea defended well, got lucky on occasion and, in second-half stoppage time, scored twice to send Germany crashing out of the tournament.