“It’s only Panama” a phrase repeated often in bars and living rooms across the World after England registered a 6-1 win against Panama in their second group game at the World Cup in Russia.

I think we have to accept that there is some merit in that statement, yes the game was largely a mismatch with the English technically and tactically superior but you can only beat what is in front of you. In tournaments gone by this is precisely the kind of game in which England would have struggled with the weight of expectation firmly against them.

Instead of this however, we saw a highly professional performance from the English not only in scoring six goals but also in the way that they managed and dominated the game from start to finish. From a tactical viewpoint the England coach Gareth Southgate came out of this match with a lot of credit, England were brave with the ball looking to attack vertically through clever passing combinations and intelligent positioning from their players.

This intelligent tactical play combined with the fantastic execution and planning of set pieces from the English will make them feared opponents in the round of 16 whether they win the group over Belgium or not. 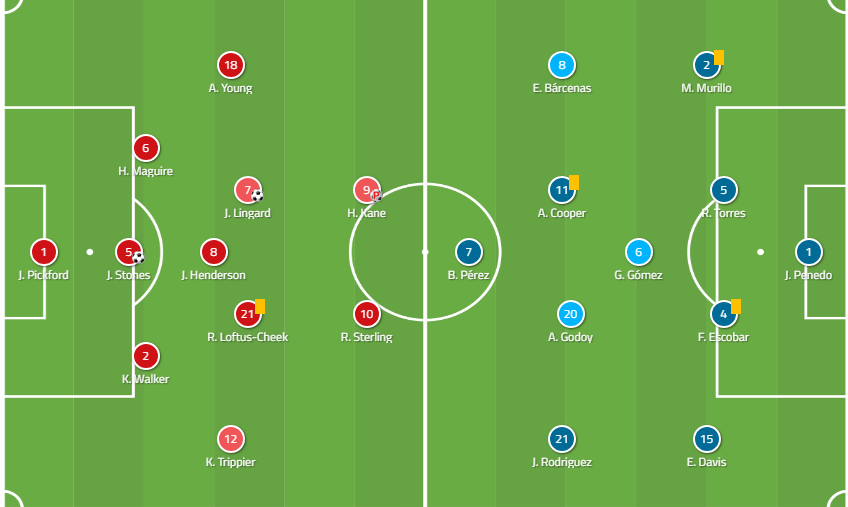 Other than that the team is taking on a settled look for Southgate with the only question remaining being whether Raheem Sterling would retain his place partnering Harry Kane in attack or whether the Manchester United forward Marcus Rashford would come in. In the end Southgate chose to keep faith with Sterling.

One of the most obvious tactical mechanisms used by England under Southgate at this tournament has been the use of the wing backs to stretch the width of the pitch right out. Both Kieran Trippier on the right and Ashley Young on the left have kept tight to their respective touchlines in the attacking phase. This stretches the width of the field and forces the opponents to account for a threat in the wide areas. This in turn creates space in central areas that England’s attacking players can exploit. 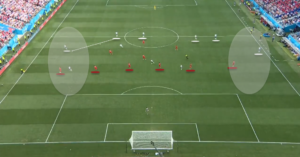 As you can see here in their defensive phase Panama dropped back more often than not to create a back five or even a back six. This mechanism was designed to prevent England from playing through passing lanes in the final third with Panama content to drop back in to a deep block to stop England from finding space. The flip side of this however, was that England had space in front of the defensive block which enabled them to build a solid platform of possession for their attacking phase. 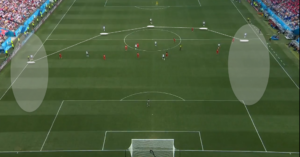 With the ball with John Stones in the centre of the field you can again see that England are very much spread across the width of the field. Kieran Trippier in particular in the right back slot is tight to the touchline with the possibility to run in behind the Panama left back who has been caught square on in a poor defensive position.

One of the features of the England build up in the attacking phase was the use of Harry Kane as a central focal point around which the other players could play. Playing on paper as part of a two he was very much more of a lone front man with Raheem Stirling given more licence to roam in and around the final third.

What we saw time and time again was Kane showing on a receiving line to take the driven pass from either Harry McGuire or Kyle Walker, From here the runners would start moving from the English midfield with the likes of Jesse Lingard and Ruben Loftus-Cheek in particular taking up good positions in and around the Panama defensive structure. 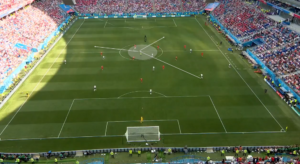 Here the initial pass comes from Kyle Walker on the right hand side as England look to transition into their attacking phase. As Kane drops into the space in front of the Panama defensive line he creates a passing lane for the ball to be played up and into the central area.

As soon as Kane receives the ball in this position he is able to turn in possession and look to connect with the players that are making runs off of him. Having a focal point like Harry Kane in the squad is extremely important for England when playing against teams like Panama that look to defend in a low block.

In this example the attacking phase for England is more established and England have setup their structure within the Panama half.

Again the pass in question is from Kyle Walker to Harry Kane in the advanced central position. Once more as soon as this pass is played in to Kane he has options looking to connect with him at different angles and depths as they move forward.

We touched on the role of the wing backs above in the attacking phase England as they look to maintain the width of the field to stretch the opposition wide and open up spaces in central areas that English players can exploit. These spaces were used very intelligently in this match as England looked to isolate weak points in the Panama defensive block. 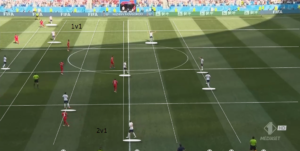 Here England have possession of the ball with Harry McGuire and you can see from their positional structure that they are in a dominant position. On the left side they have a 2v1 against an isolated defensive player and on the right they are isolated 1v1 with Tripper.

Now look at how many players that England have in between their defensive counterparts and how many different receiving lines the man in possession have. With this attacking structure England are able to move the ball quickly through the Panama defence.

Again here you can see the way that England use their positional structure in order to create match-ups in wide areas that allowed them to dominate their opponents. With Kyle Walker in possession of the ball Ruben Loftus-Cheek and Kieran Trippier made themselves available and isolated the left sided defender for Panama.

In these situations the English were able to move forwards comfortably and penetrate the final third whenever they had possession.

Yes, it was only Panama but we cannot allow that to detract from what was a very positive English performance. In tournaments previously England would have found a way to struggle in this match on their way to a scrappy 1-0 win. Instead they dominated and scored six times in a single match.

There is no doubt that there will be harder tasks to come in this tournament but I do not think that anyone should be looking forward to facing the English.

Check out some of our other analysis pieces. Croatia Vs Nigeria Tunisia Vs England