Both teams were already ruled out of qualifying for the knockout rounds, so this was essentially a dead rubber match. Both teams had yet to pick up a point in their previous 2 games of the group stages so would be trying to salvage some sort of respect from the last game. 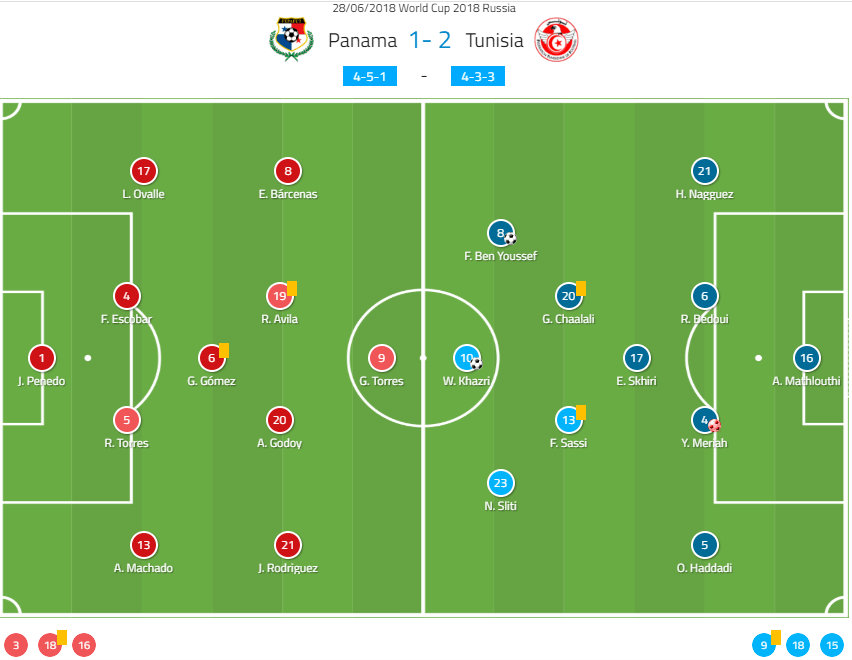 Panama made 4 changes from the team that lost 6-1 to England  with both Armando Copper and Michael Murillo missing out through suspension – with Ricardo Avila and Adolfo Machado their replacements. The other 2 changes saw Eric Davies and Blas Perez drop to the bench with Luis Ovalle and Gabriel Torres replacing them.

Tunisia also made plenty of changes with a huge 6 changes from the team that lost 5-2 to Belgium. Farouk Ben Mustapha, Syam Ben Youssef, Dyland Bronn all missed out through injury, with Aymen Mathlouthi, Rami Bedoui, Hamdi Naguez their replacements. Ali Maaloul, Saif Khaoui and Anice Badri were dropped to the bench with Oussama Haddadi, Ferjani Sassi and Naim Sliti coming in for them.

With 11 goals conceded against Belgium and England, the Panama defence are obviously not world class (which is to be somewhat expected given their size and stature in the game), so I was interested to see how they’d fare against a somewhat weaker opponent in Tunisia. Sadly they still didn’t fare much better, being carved open numerous times – with the 2-1 loss flattering Panama somewhat.

With both teams playing the same formation (a 4-1-4-1) it was far too easy for Tunisia to find space in between the Panamanian lines which in turn put pressure on the defence – that simply couldn’t cope. Below is a picture from the 7th minute of the match. Tunisia have the ball in an unthreatening position, but due to poor positioning and indecision it quickly turns into a dangerous chance.

For some reason, the number 8 (the Panama left-winger) occupies a central position when the Tunisian centre-back is on the ball, which allows the Tunisian right-back to push on. The Tunisian right-winger then cuts inside, leaving the Panama left-back in 2 minds – does he follow the winger? Does he track out to follow the man out wide? Instead, he retreats to buy himself some time, and in the space of 3 seconds, Tunisia go from having the ball harmlessly in their defence to being between the Panama lines, with an overload on the wing. 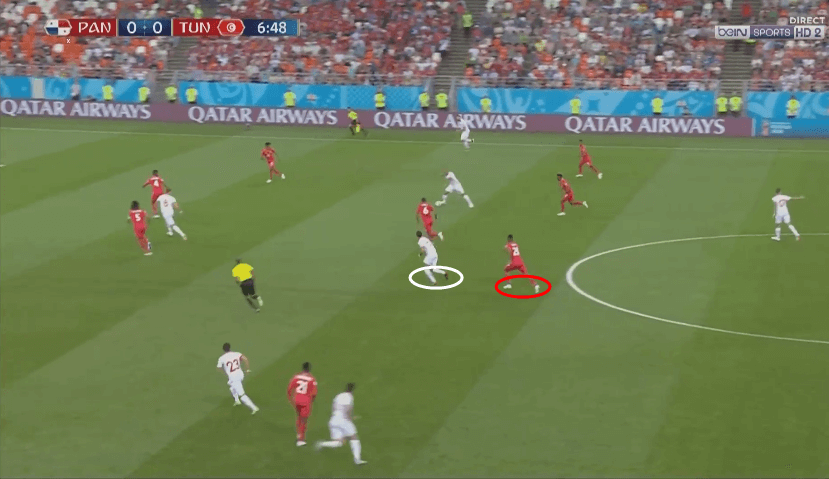 The above image is 2 seconds later, we see the same 2 players circled, the Panama player is nowhere near the runner – and with the centre-back having to step to tackle the player on the ball, would have left the Tunisian player circled in a very dangerous situation.

This wasn’t a one-off, with Panama being regularly drawn to the ball instead of tracking runners – stemming from a lack of awareness of their surroundings. 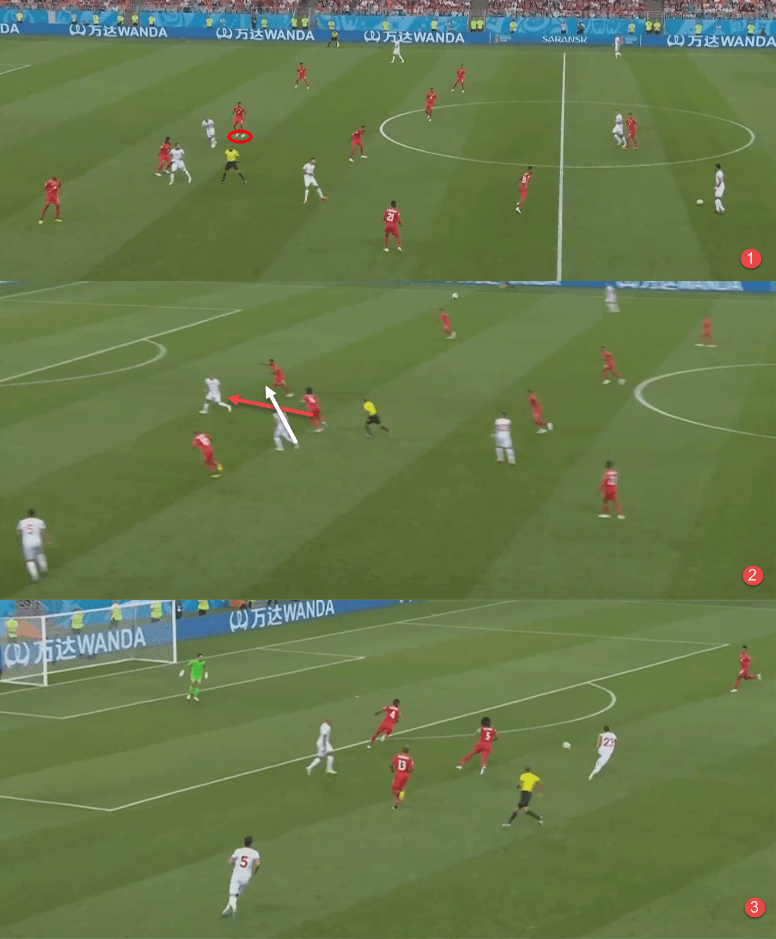 1: We see Khazri lose his marker – his marker is ball watching allowing Khazri to gain a second to make the run.

2: The ball is played into Khazri, the other Panama defender is drawn to the ball, whilst the player he was marking drifts into the space created by Khazri.

3: Khazri makes a first-time layoff to the player in space, leaving both Panama defenders stranded.

With Tunisia finding it so easy to create chances, it’s not really a surprise that they dominated the match recording an incredible 69.3% possession. They achieved this by dropping players back whenever the goalkeeper had the ball – allowing them to retain possession and build from the back.

They also took advantage of the poor technique on show in the Panama midfield, often pressing them with numbers trying to force an error which would result in a turnover in possession.

Panama also didn’t help themselves, often choosing to play the ball long when much better short options were available – which often resulted in Tunisia winning the ball straight back and coming straight back at Panama, who would again clear it long resulting in a clear period of sustained possession for Tunisia. In the below example the goalkeeper plays the back-pass long up the pitch, despite numerous defenders in space to receive the pass.

The game was played at a very high tempo, was scrappy in places but ultimately an enjoyable game. The scoreline flattered the Panama defence as Tunisia definitely should have had scored a couple more considering the amount of chances that were created. Hopefully, Panama can work on some of their defensive issues and will surely be pushing to qualify again for the next world cup in 2022.