Before the World Cup began, the majority of England fans would have seen the quarter-final stages as a minimum achievement for a successful campaign. However most would not have expected Sweden to be their nation’s quarter-final opponents and consequently the Three Lions now find themselves as favourites to reach what would be only their third ever World Cup semi-final. We take a look at the strengths that have gotten England this far and what they will need to overcome their fortitudinous Scandinavian opponents in the last 8.

For many years England have had an incredible array of talent at their disposal but have flattered to deceive with their performances time and time again. There have been many debates as to why that’s been the case but what has been evident is that England teams have lacked a distinct style of play. Spain have their ‘Tiki-Taka’, the Brazilian’s have their ‘Joga Bonito’ and the Dutch have had their ‘Total Football’ to name a few but what comparable philosophies are the English known for? Whether he was mandated to or not, current manager Gareth Southgate has set his sights on rectifying the lack of a successful identity in the England national team and so far has arguably produced the most watchable England side of the last two decades.

It didn’t take long after Southgate’s appointment to see an obvious change in the team’s setup. The new boss setup his side in a 3-5-2, a shape that gives his side a solid base around 3 central defenders while utilising excellent wing-back options who can dominate the flanks. The formation keeps a three-man central midfield with one player sitting deep, screening the defence and the other two playing further up as attacking midfielders. Two strikers play up top, typically with one dropping into space in the midfield to help create overloads or open space in behind the opposition’s defence. 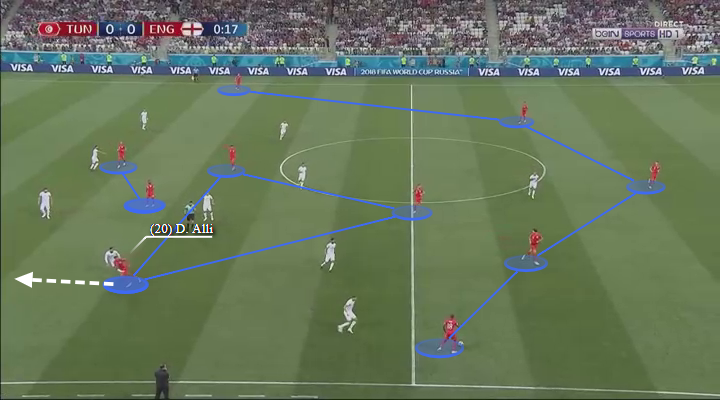 The identity of Southgate’s side is based around the principle of keeping possession. Southgate has predominantly deployed 3 centre-backs and he demands that they are all comfortable on the ball. The preferred centre-back trio consists of Man City’s Kyle Walker and John Stones on the right and centre respectively with Leicester’s Harry Maguire on the left. Stone’s is positioned centrally as he is key to the ball moving past the opposition press and into midfielders or forwards. Calm and collected in possession, Stones has been a key figure in Pep Guardiola’s record breaking Manchester City side where his duties in possession are largely the same.

Stones often takes the ball from his keeper and pushes the team up the pitch, directing play and looking for gaps in the first layer of the opposition block. 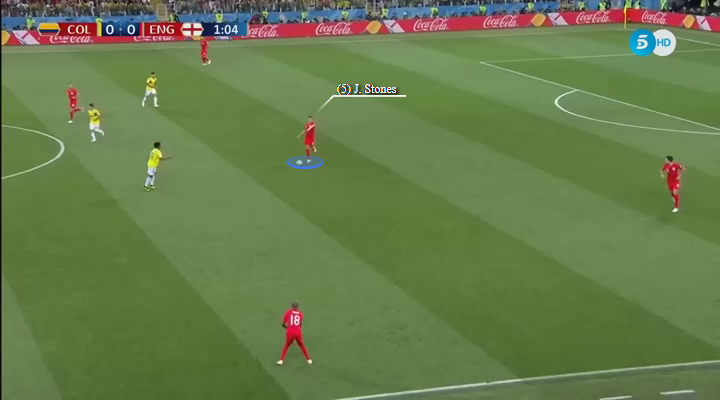 Stones is very comfortable in possession for a centre-back and is not easily flustered under pressure, he will take his time to pick the right pass, a pass he can usually execute with precision. 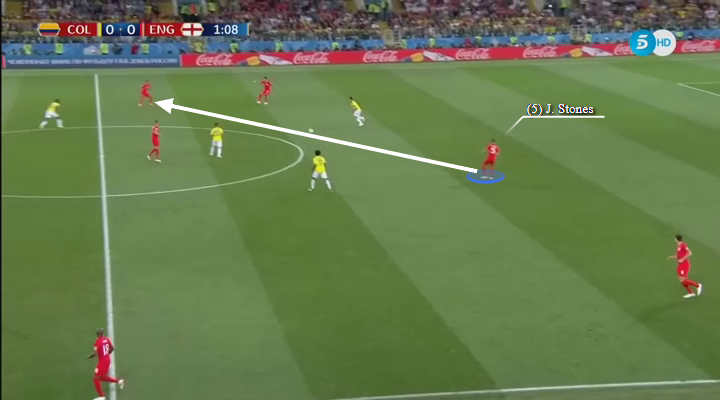 Defensively this 5-3-2 shape gives England a very solid base. 5 men sit across the back-line while 3 midfielders marshal the space in front of them. 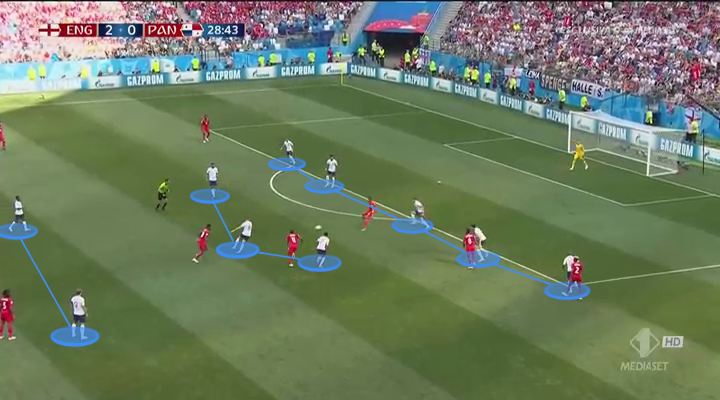 Having 3 central defenders with one holding midfielder never far away reduces exposure for the Three Lions to crosses into their penalty area while the pace of John Stones and particularly Kyle Walker provides cover for dangerous through-balls. 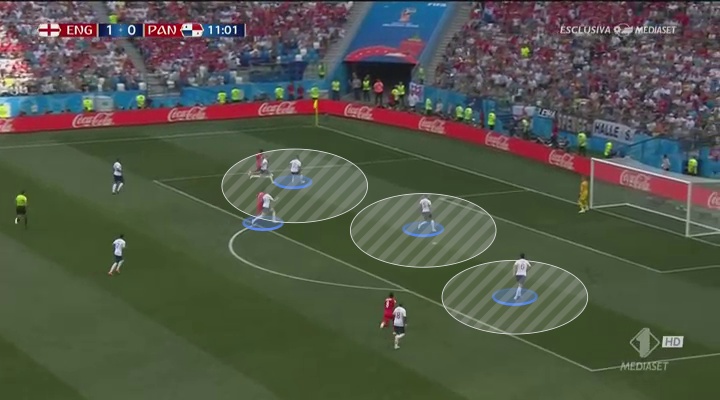 What they’re up against

“I don’t think anyone will want to play us. We’re an aggressive team, we trust our defence and create chances. We are frustrating for opponents. We let them have possession. It doesn’t bother us, and then in these four games we’ve been really effective.” said Ola Toivonen after his side’s last 16 round win over Switzerland. The Swedish striker succinctly displayed the squad’s commitment to their manager’s setup. Much of what has carried Sweden this far is intangible. Team spirit, team cohesion and collective will cannot be directly measured in match statistics but what can be measured is Sweden’s lack of possession. Janne Andersson’s side do not look to dominate the ball, most likely because they lack players of technical superiority but what they lack for in that area they make up for in stature. Sweden do not lack for height in either box and will look to overpower England with aerial balls into their forwards.

“Everything about them is difficult” said Switzerland and Arsenal midfielder Granit Xhaka, quoted after his country’s last 16 exit by the hands of Sweden. Janne Andersson’s men are, if nothing else, very difficult to beat. The Scandinavian team have three clean sheets from four games so far in Russia this summer, conceding only two goals against World Cup holders Germany. Sweden setup in a narrow 4-4-2 block when defending, together with their aerialy dominant defenders, the Swedes will be happy to send England wide and deal with incoming crosses from wide areas. 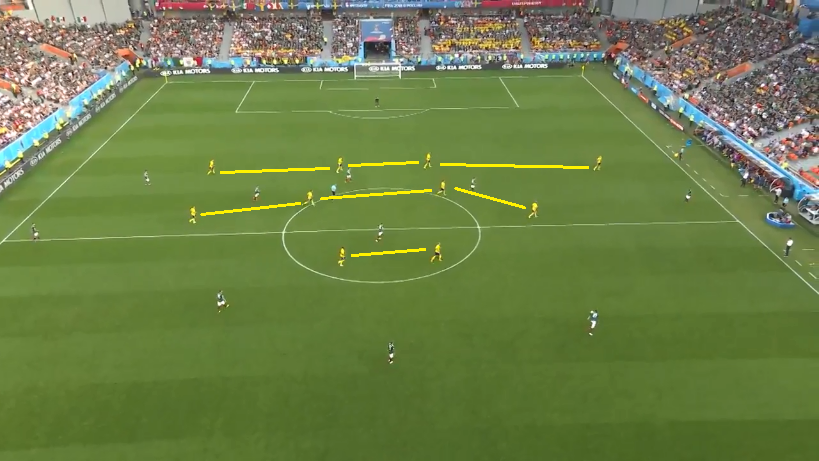 Typically sitting deep and letting their opposition dominate the ball, Sweden look to break quickly if they can, with wide men Emil Forsberg and Claesson primarily responsible in transition phases. As they have done previously to other teams, Sweden may look to stop England playing out from the back. If they can force England to play long they can use their aerial superiority to keep England at bay. 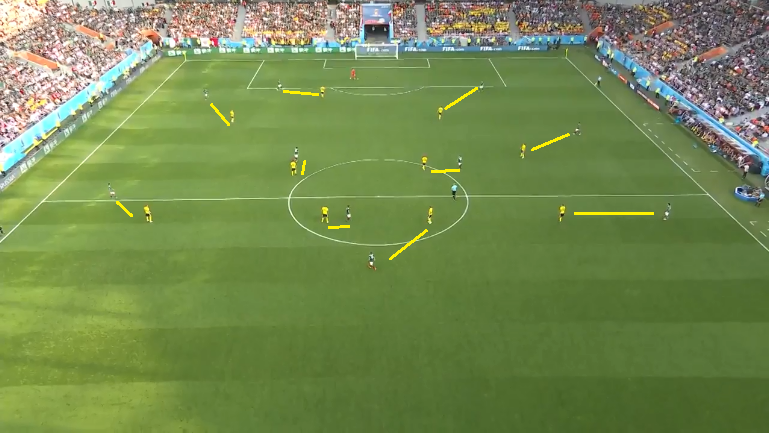 Just like every team they have come up against so far, Sweden will fancy themselves in 1v1 battles against England given their superior size and arguably superior athleticism overall. Winning those battles, getting to second balls first married with their usual fighting spirit will be essential for the Scandinavians if they are to reach the World Cup semi-finals. Gareth Southgate’s men have their work cut-out to overcome the Swedes.

What will they need to do?

England will very likely setup with their preferred line-up. Dele Ali is not in form and could possibly be dropped in favour of Ruben Loftus-Cheek. 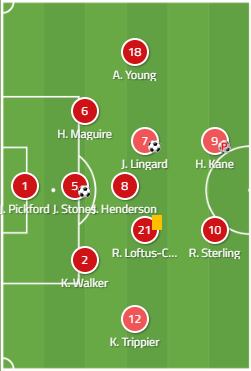 The four players positioned in front of Jordan Henderson will need to be at their fluent best to pull apart the Swedish block. The movement of Jesse Lingard and Raheem Sterling could be pivotal to England finding gaps in the yellow wall but it will require clever passes from Henderson and the back three to make full use of those players creating space. Lingard could be the chief space invader within the Swedish block with his quick, dynamic runs together with one touch passes have already created one memorable goal at this World Cup.

That goal came against Panama in the group stages, playing in the attacking midfield role, Lingard moved left to support Young in the 36th minute, drawing a midfielder out and creating a gap in behind. 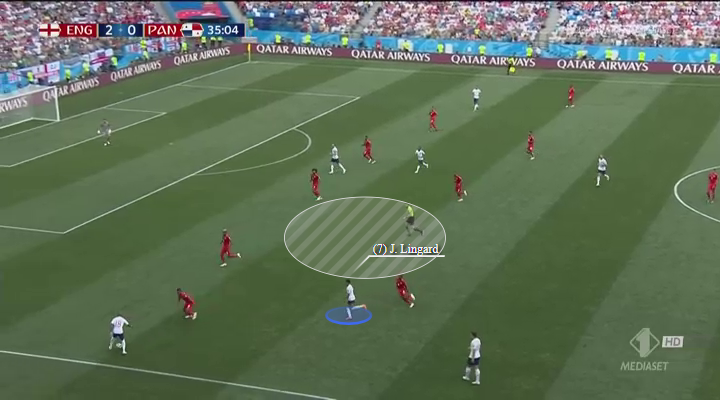 Having quickly dribbled around his first marker, Lingard drew another Panama midfielder toward him. This time Jesse played a clever pass and move with Raheem Sterling and received the ball just outside the opposition’s box. 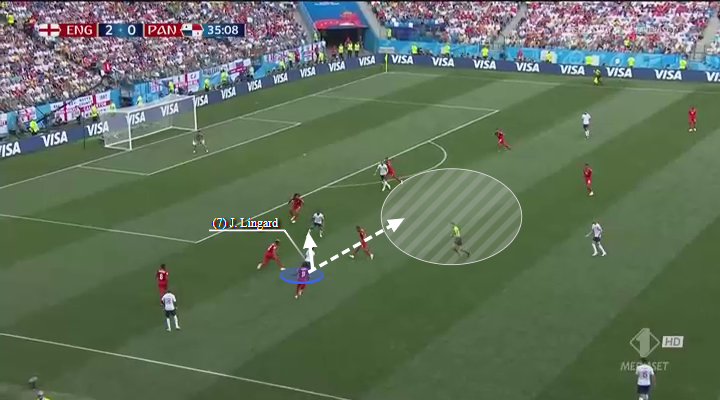 Having worked his way into a shooting position, Lingard smartly used the Panama centre-back as a screen to bend a whipped shot around and watched it fly into the top corner. 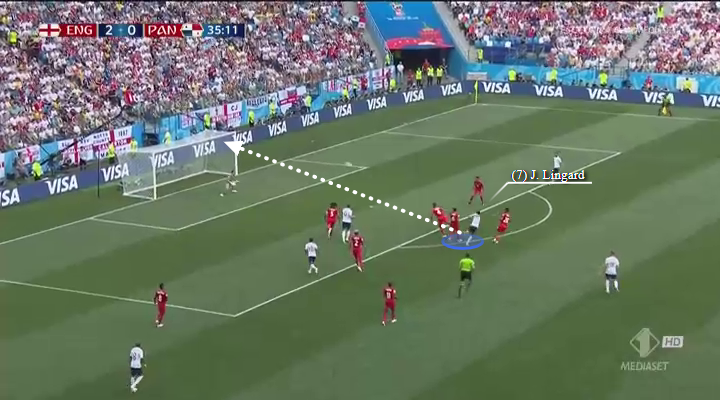 This type of creativity will likely be essential in unlocking one of the tournament’s best defences. Expect Jesse Lingard to be a starter in Samara, likely alongside Spurs man Dele Ali or Chelsea’s Loftus-Cheek who will be tasked with a similar role. The attacking midfielders are given licence to move around, creating space behind midfield lines or running beyond their strikers. 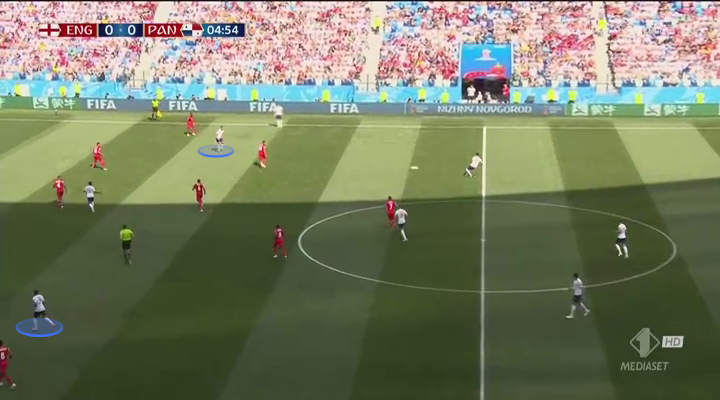 What it would mean

England have not been to a World Cup semi-final since 1990, a win tonight would secure their third last 4 appearance. As many of the country’s football supporters like to remind us all, the nation is the home of football and since their maiden triumph 52 years ago, they have arguably never had as good a chance as they have this year to end their major trophy drought. The last several World Cup campaigns have promised much from an England point of view but have all failed to deliver to such an extent that most England fans would not have been surprised had their country been knocked out by Colombia in the previous round.

Now they find themselves favourites to reach the semi-finals of the World Cup with a young, inexperienced team lead by a manager who was deemed to have failed at club level and who has been a part of faltering England teams as a player. A loss would be devastating given the competition left in their path but a World Cup semi-final berth would completely rejuvenate the nation’s appreciation for their men’s football team and would arguably spark unprecedented levels of excitement and unity throughout the country.

England possess the better players on paper and given Sweden’s record in the tournament thus far against technically superior sides expect to see the Three Lions dominate the ball. England’s 3-1-4-2 in possession should see their wing-backs on the ball a lot against Sweden’s 4-4-2 block, but if Southgate’s side resort to crosses as their main route they will likely have little joy. Both teams are accomplished from set-pieces and it’s likely that the game’s first goal, if there is one, will arise from such a situation. I believe both sides will cancel each other out in 90 minutes before England get an extra-time winner, perhaps from an unlikely source.