The second semi-final of the FIFA World Cup 2018 will see Croatia come up against England with very little to choose between the two sides for a place in the final in Moscow. Croatia impressed as much as any other side in the group stage before starting to stutter in the knockout stages needing penalty kicks to see off Denmark in the round of 16 and Russia in the quarterfinals.

That does not however change the fact that the Croatians are very dangerous opponents with perhaps the most talented midfield unit in World football at the moment. Facing this England however who have been superbly coached by Gareth Southgate throughout the tournament will be a tough proposition with the English being impressive tactically in their loose 5-3-2 structure that is anything but a defensive shape.

There will be key tactical battles both in the defensive and in the attacking phases that Croatia will need to win in order to secure their first ever appearance in a World Cup final. They have the personnel in order to win the match but do they have the tactical flexibility?

Throughout the tournament England have been extremely difficult to break down in open play. In Harry Maguire, John Stones and Kyle Walker they have three central defenders who are composed and capable in possession but they also possess pace and power when looking to defend whether in the air or on the ground. Combine this with the defensive work rate of Jordan Henderson in the ‘6’ or defensive midfield role and of Kieran Tripper on the right and Ashley Young on the left and you can see why England are so solid defensively.

In the quarter final match against Russia the Croatian coach Zlatko Dalic sprung something of a surprise with the introduction of the Hoffenheim forward Andrej Kramaric with Marcelo Brozovic dropped to the bench from midfield. This change left Croatia with a flat two in the centre of midfield but gave them added attacking impetus against a deep Russian defensive block. 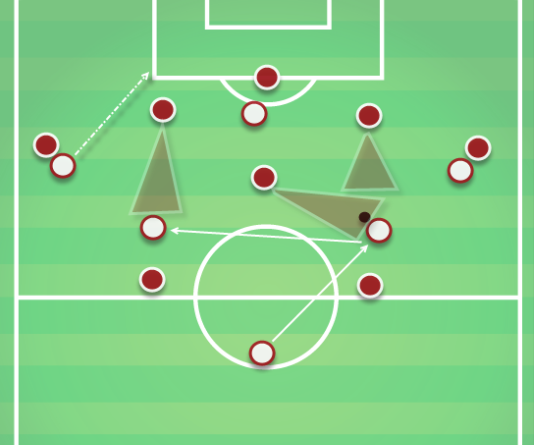 Against England, however, I expect Dalic to revert to his more traditional 4-3-3 shape with Brozovic back in as the ‘6’. This addition could be key in shifting the English defensive block. Here I have produced a graphic showing the type of ball movement that I expect to see from the Croatian midfield in order to unbalance England.

As the ball is shifted by Brozovic in the ‘6’ to either Luka Modric or Ivan Rakitic playing as the ‘8’s’ then the focus of Jordan Henderson and the near sided central defender is immediately drawn to that player. With Croatia playing their wide players out they essentially negate the chances that the English wing backs have to move centrally to support the defensive phase. As soon as Henderson starts to shift across Croatia will move the ball across and leave the other wide central defender with a real problem. Should he decide to step out and engage the ball carrier then space opens up in the English defensive line which can be exploited.

In order to break England down Croatia are going to have to continually isolate defensive players in this manner and make them choose between stepping out to engage a player or letting them have possession and holding their defensive shape.

Croatia must deal with the movement of Raheem Sterling

The Manchester City attacker has been criticised in some areas for his poor finishing in the tournament so far but if you isolate and remove that from his game then the quality of his output in the attacking phase will rival any other attacking player. 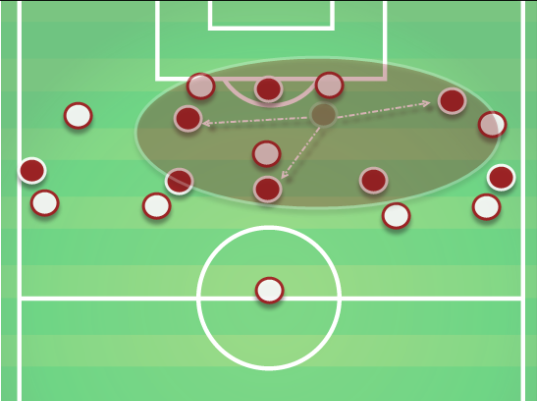 On the teamsheet, he may appear to be partnering Harry Kane in the forward line but his role is far more nuanced than that. Sterling is continuously in motion whether dropping deep to receive the ball in between Jesse Lingard and Dele Alli or pulling out in to wide areas to overload the attacking fullback, add to that his ability to time runs beyond the defensive line to break on to direct passes and you can see why he has causes the opposition so many defensive problems.

In order to deal with the threat posed by Sterling in these areas, there are two key choices that Dalic will have to consider going into the match. Firstly he can assign a single player to closely mark Sterling and follow him as he drops in and out of zones to receive possession, this option is a valid one but not one that should be followed, an intelligent attacking player who is being closely man marked will simply pull out in to ‘dead areas’ of the field leaving the defending team unbalanced defensively.

Instead, I would expect to see Croatia follow the second option in keeping a zonal defensive block and having players pick up Sterling as he moves in and out of his zone. There is still danger in this approach as intelligent movement from Sterling will see him look to overload specific defensive players.

England will overload the half spaces

One of the features of the English tactical system that we have seen so far this tournament has been the way that they have overloaded the half spaces on both sides of the pitch. The movement of Raheem Sterling combined with Jesse Lingard and Kyle Walker on the right or Dele Alli and Harry Maguire on the left has seen the English open passing lanes and angles at different depths. 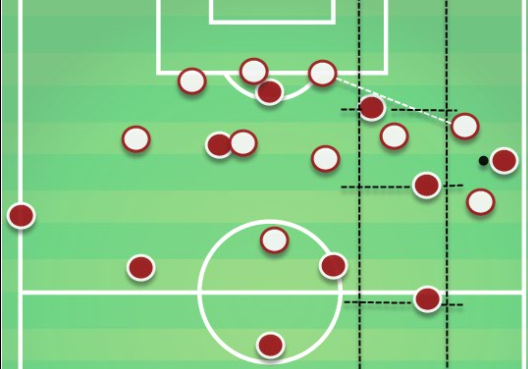 Here you can see an example on the right side as Kieran Tripper stays tight to the touchline on the outside and England have three players in the attacking phase on different receiving lines in the half space. These staggered lines give depth and options to England going forward and make it very difficult for the opposition to effectively defend against them without committing defensive pieces and breaking their own defensive organisation.

Key for Croatia in these areas will lie in challenging the ball at source with either Kieran Trippier or Ashley Young in the wide areas. If the wide forwards for Croatia do not track back and defend effectively then the fullback has to move out to engage the ball and the spacing between him and his near sided central defender is wrong. This in turn creates space that can be exploited for England going forward. If the wide forwards come back and press the ball carrier wide then the fullbacks can stay more compact and deny England space in the final third.

Why not check out match analysis of England Vs Colombia, Croatia Vs Denmark  Russia Vs Croatia and Sweden Vs England