The 2018 World Cup is now down to its last few teams. Some big names have fallen along the way with the likes of Spain, Argentina, Brazil and perhaps most notably Germany all failing to live up to expectations. Despite these sides falling at earlier stages there can be no argument that the four sides left at the semi-final stage, France, Belgium, England and Croatia, deserve their place in the later stages.

The first semi-final saw France, champions in 1998, come up against Belgium in a match that would see the best defence at the tournament, France, against one of the best attacks, Belgium. In the end, the narrative of defence against attack was played out over the course of the 90 minutes and in the end, the margins between the French victory and the Belgian defeat were minimal.

How though did the French manage to secure their passage through to the final in Moscow? 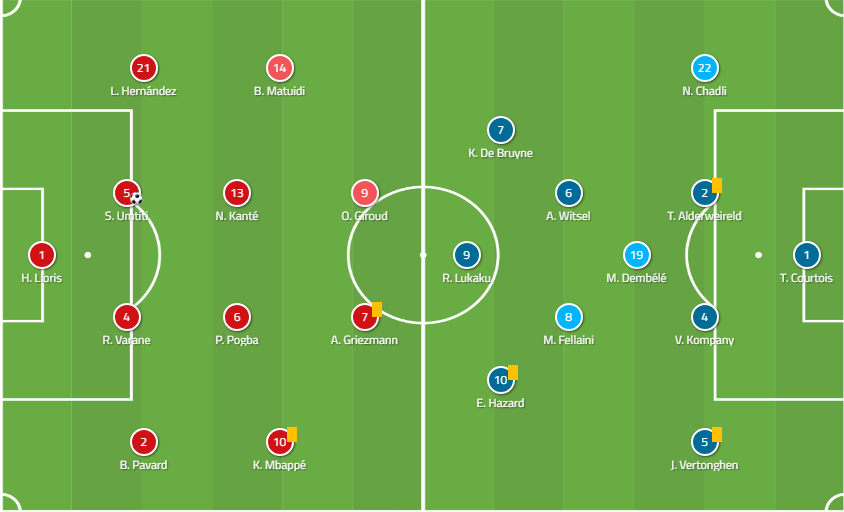 In the quarter-final against Brazil, the Belgian coach Roberto Martinez was given a huge amount of credit for his tactical gameplan which saw Romelu Lukaku moved out to play from a starting slot on the right-hand side with Kevin De Bruyne playing as almost a false nine. This switch caught the Brazilians by surprise with Marcelo prevented from playing in the attacking phase as much as he would have liked by the presence of Lukaku in his zone.

This time around with the right back or wing back Thomas Meunier serving a suspension Martinez again sprung a surprise in giving the Tottenham Hotspur midfielder Mousa Dembele only his second start to the tournament.

For France, there were no surprises with coach Didier Deschamps choosing to keep faith with Chelsea striker Olivier Giroud in attack despite his lack of goals to this point. Key in the attacking phase would be the contributions of Kylian Mbappe and Antoine Griezmann.

The French defence has been superb for the duration of the tournament with the centreback pairing of Raphael Varane and Samuel Umtiti in particular drawing plaudits for their defensive efforts.

When the team news was released there was some doubt as to how the Belgians would actually line up with the right wing back Meunier being replaced by a central midfielder in Dembele. Would De Bruyne be dropped back to play at wing-back or would we see Nacer Chadli dropped back as a fullback in a more traditional back four shape? In the end, we saw some interesting tactical flexibility from Belgium as they altered their positional slots switching from a back four when defending to a back three in the attacking phase with Chadli operating as both a right back and a right winger depending on who was in possession of the ball. 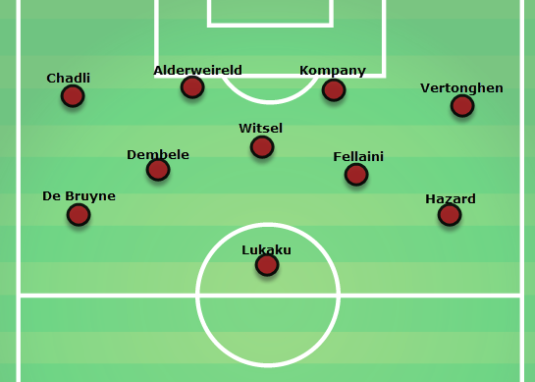 When France had the ball we saw Chadli slot in at right back with De Bruyne dropping into the right of the midfield in a defensive block. This allowed Belgium to shield their defensive line with Axel Witsel, Mousa Dembele and Marouane Fellaini preventing France from playing through centrally. 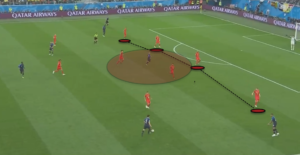 Here we can see Belgium defending in their back four with Chadli dropping into the right-hand side. The back four shape was more effective against the French with Olivier Giroud playing in the main as a lone striker it left two Belgian central defenders against one French forward. A back three against one forward would have left Belgium underloaded elsewhere in their defensive phase and given France an opportunity to take advantage. 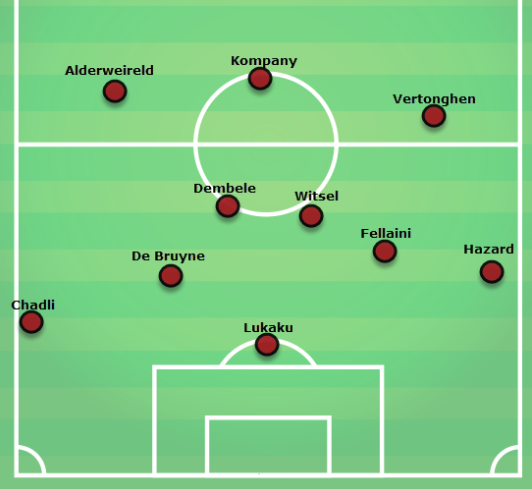 In the attacking phase, we saw Jan Vertonghen in the left back slot retain a deep position with Toby Alderweireld moving across to the right and Vincent Kompany retaining his central position. This gave Belgian a back three in possession across the width of the field and gave cover for Nacer Chadli to operate as a right winger when Belgium were looking to attack.

Here you see the Belgium shape in action with the back three clearly defined. With Chadli being given freedom to advance on the right-hand side of the field this also allows for Kevin De Bruyne to move inside to occupy the halfspaces in the attacking phase where he can pick up possession of the ball in areas that could hurt the French defensive block.

One of the common features of the match as Belgium looked to find a way through the stubborn French defensive block was the positioning of Eden Hazard as he continually left his position on the left-hand side to take up more central positions. The Belgian captain was superb throughout the tournament with his capacity to drift past an opponent in tight areas key for the Belgians in creating so many chances as the tournament progressed. This ability was even more useful in central areas where his 1v1 ability was key in unbalancing the French defensive block. 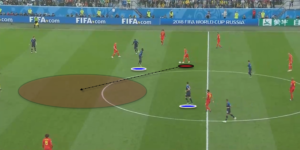 Here we see Hazard taking possession in the centre of the field and isolated against Paul Pogba in a 1v1. Throughout the match, Pogba was superb in giving a tactically disciplined performance but even then he struggled to contain hazard in these direct duels.

In these areas when Hazard is able to go past his man he essentially takes out three French players in one attacking movement driving into the space in front of the French defensive line and giving his teammates opportunities to exploit space as other French defenders have to engage him. 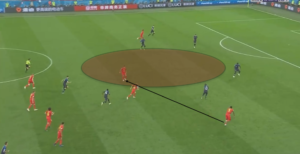 There are few better defensive triangles in football at the moment than Raphael Varane, Samuel Umtiti and N’Golo Kante ahead of them. With these three players to build around the French defensive block is imposing to say the very least. For all that the Belgians dominated the ball for large portions of this match, they still struggled to find a way to penetrate this defensive structure with the likes of Paul Pogba and Blaise Matuidi also performing key roles. 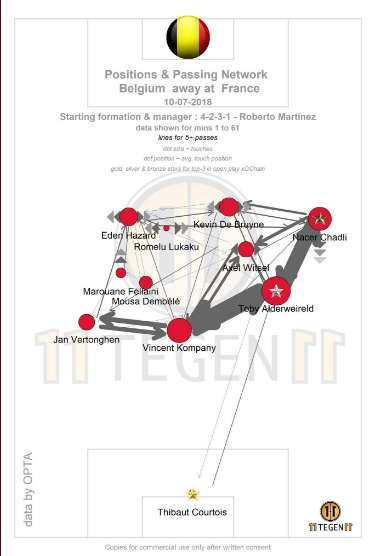 This pass map for Belgium in this match was provided by the excellent @11tegen11 using Opta data. You can see that whilst the Belgians had a lot of possession and dominated the ball the bulk of that possession was in areas where the French were comfortable. They allowed the Belgians possession from their central defenders and central midfielders and only really pressed when the ball entered the final third or when Hazard of De Bruyne took possession.

Here we see that with the ball in the French half with Vertonghen the French have pulled everyone back behind the ball to defend in a deep defensive block with very little space for Belgium to find passing lanes through the centre or spaces to occupy between the French defenders. Indeed France were content to allow the Belgians to attack out wide as they trusted that Varane and Umtiti could deal with any crosses into the area. 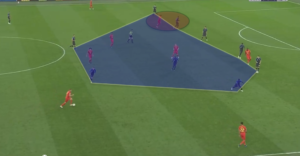 Again here you can see that the French are defending in a compact shape denying the Belgians any space that they could exploit in the defensive third of the field. One of the most interesting aspects of the second half was the role played by Paul Pogba as he shadowed his Manchester United team-mate Marouane Fellaini in the defensive phase to prevent the Belgian midfielders from causing chaos in the penalty area with his physical presence. It was impressive that Pogba was tactically disciplined enough to accept this role and indeed it seems to be a sign of his growing maturity as a player.

You cannot help but feel for Belgium, they fell behind to a set piece goal but dominated large portions of this game without finding a way to break through the French structure. Indeed the xG scores of the game are a real indicator of how good France were defensively

The xG chart provided by @11tegen11 using Opta data had France winning by 1.91 to 0.38. This shows that despite their domination of the ball the Belgians struggled to create any clear opening. France, on the other hand, could well have extended their lead with the pace of Kylian Mbappe in the transition creating several goalscoring opportunities.

So on to the final in Moscow for France. The key question will be whether the Croatians or the English will have the quality to break through the French defence.