Croatia reached their first ever FIFA World Cup final by beating England 2-1 after extra time. It makes Croatia the first Eastern European side since Czechoslovakia in 1962 to reach the final of a World Cup and the third nation to reach that stage since Hungary did it first. Both previous nations lost. If Croatia play at the same level they did when turning this game around they have every chance of breaking that barrier. Maybe the FIFA World Cup 2018 is the tournament when Eastern Europe finally delivers a world champion. Let’s take a look at how they turned the game around.

Croatia’s team was predictable, with the only worry whether Sime Vrsaljko would be fit enough to start. He was and lined up at right back as always. Croatian coach Zlatko Dalic also opted for a 4-3-3 with Marcelo Brozovic joining Luka Modric and Ivan Rakitic in midfield. 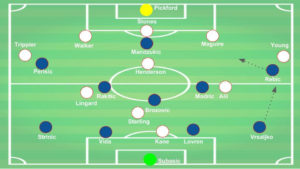 England started brightly and pressed high early on. The front-two of Sterling and Kane would work together to steer the ball away from Brozovic and allow one of the centre-backs to carry it forward. Lingard and Alli would defend according to their positions but with loose man-orientation towards Rakitic and Modric respectively. Barely a minute had gone when Lingard fouled Rakitic just outside his own box, highlighting England’s loosely man-orientated pressing scheme. An example can be seen below. 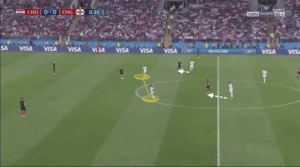 If the ball went to either Croatian full-back then the ball-near wing-back would step up to press and the other four defenders then shuffling across to cover. This was effective mainly because of Croatia’s poor passing in the early stages. They often moved the ball slowly and missed a lot of simple passes to help England gain control of the game.

In deeper areas, it was clear to see how England looked to cut off the central areas for Croatia’s supremely talented midfielders. In the image below we see how Alli, Henderson and Lingard stay close together to prevent central progression of the ball thus leaving the wings free. 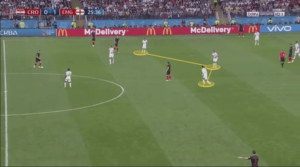 Another reason for England’s control in the first half was the poor pressing from Croatia. Their idea seemed to be for Modric and Rakitic to leave midfield and press towards England’s outer centre-backs. The wingers Rebic and Perisic dropped deep when Trippier and Young went forward. This meant only Brozovic covered the press in central areas and when the press was beaten this proved problematic. The setup can be seen below. Note the huge space around Brozovic in midfield. 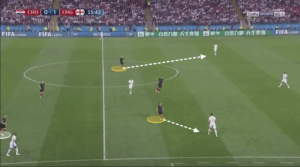 England’s goal came from a situation where Croatia’s pressing caused themselves problem. Below we first see the setup again. I’ve highlighted the space in either half-space beside Brozovic. 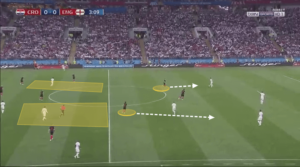 Walker opted to go long, and the second ball fell to Lingard who had plenty of time given Rakitic was so far forward. Brozovic was obviously drawn towards Lingard who set up Alli just outside the penalty area. Modric, reacting too late after his initial pressing action, fouled him and Trippier scored from the resulting free-kick. 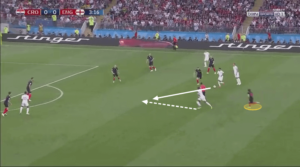 England were clearly the better side in the first half but there were signs Croatia was coming into it towards the end of the half. More on why later. In the second half, Croatia’s pressing improved tremendously. England had beaten the press quite often in the first half while also causing trouble by winning the second balls due to Lingard and Alli’s 2 vs 1 advantage over Brozovic. But Croatia changed their pressing slightly and started to cause England problems. First of all, Modric and Rakitic picked up more clever positions in defence. Below we see how Rakitic goes to press Walker. Modric isn’t staying on the right against Maguire, however, but has instead moved across to cover Henderson. This gives Croatia a more effective second line of their press. Mainly this means greater cover should the first pressing line be beaten. Should the ball be switched across then Rebic has every chance to press Maguire. 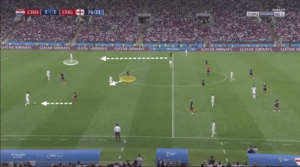 Below is another example as Stones beats the initial press of Mandzukic and Perisic. Modric has moved across well to cover Henderson though and Rakitic is also ready to press when the ball goes wide. Also, Brozovic picks up a great covering position in midfield. 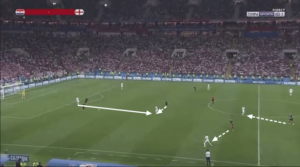 The improved pressing schemes caused England huge problems and showed Dalic’ tactical intelligence. The biggest change in their performance in the second half, though, was the mentality of the Croatian players. They pressed with intensity and were extremely aggressive, making it very uncomfortable for the English players. The result was aimless long-balls from the English defence and multiple simple recoveries for Croatia in midfield. The constant regaining of possession saw Croatia attack in wave after wave after the hour and ultimately they had turned the game around.

England’s attacking game, therefore, suffered in the second half. In the first period, England had threatened often through Raheem Sterling’s pace or Lingard’s and Alli’s combinations between the lines. Harry Kane became isolated though and started looking for the ball to feet instead but the ball didn’t come. The below scene is symptomatic for how England lost their way. John Stones, a very intelligent passer, is on the ball without any real options available. He decides for the cross-field pass to Ashley Young. The problem is the excellent positions of Croatia and especially the right-back Vrsajlko who is quick out to press Young as the ball travels in the air. Young has to rush a header and Croatia regain possession. The pass simply wasn’t on but Croatia’s aggressiveness and very good defensive shape rattled the England players into making bad decisions. 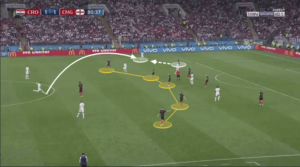 As Croatia went in search of an equaliser and eventual winner they did so by exploiting the weakness in England’s formation; the wings. They looked for this throughout the game and both Perisic and Rebic was threatening. In theory, the back-five gives good coverage of the wide areas, but England’s narrow midfield gave no protection to the wing-backs. Most importantly, there was no one to press Croatia’s full-backs when they went forward since England’s wing-backs were pegged back by Croatia’s wingers. The man-orientated pressing towards Rakitic and Modric from Lingard and Alli meant the full-backs Vrsaljko and Strinic was always left alone. Croatia exploited this ruthlessly through constant switches of play as well as doubling up in these areas with Modric and Rakitic making movements towards the wide areas. This dragged Lingard and Alli out of position and weakened England’s coverage of the central areas as well. Especially in extra time did Croatia find a lot of space between the lines in midfield. 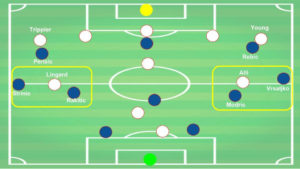 The above image highlights the situations Lingard and Alli were often forced into as Croatia cleverly pulled England’s compactness apart.

Both Croatian goals came from this type of overload. The first one is highlighted below. Vrsaljko (white) has pushed forward from right-back into the space opened up by Rebic inverted run which has dragged Young (yellow) inside. Rakitic sprays an excellent ball wide. I’ve highlighted Alli (blue). Look at that space outside of him he’s now forced to defend while also keeping an eye on Modric (yellow just out of shot). It’s impossible for him to get out to Vrsaljko in time. The Atletico Madrid full-back then crosses well and Ivan Perisic finishes acrobatically. 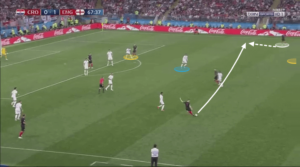 The second and decisive goal wasn’t as directly influenced by the overload as it wasn’t scored direct from the cross. Nevertheless, the situation arose because of the time Croatia created for themselves in wide areas. Lingard has been isolated in a 2 vs 1 against Rakitic and Pivaric. Perisic’ position stops Trippier from going into pressure. Rakitic passes to Pivaric who swings in a cross. The cross is cleared but only up into the air where Perisic beats Trippier, Stones fails to react quickly enough and Mandzukic sends Croatia through. 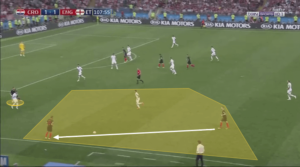 Croatia have reached their first ever FIFA World Cup final and they did so by coming from behind yet again, the third time in the knockouts, to beat England. England’s bright start was undone by Croatia’s improved pressing, intensity and clever use of the wide areas. More than anything though this was a mental victory for a side full of winners. Psychologically Croatia are really strong and go into the final against France full of confidence. It will be exciting to see if this Croatian side can become immortal by bringing a first ever World Cup to Eastern Europe. It would be fitting, given the FIFA World Cup 2018 has been played in Russia.

Want to learn more about Croatia’s run to the final? Read about there quarter-final here, their last-16 here and their stunning win over Argentina here.