It’s safe to say neither team has had a fantastic World Cup, with Argentina only picking up a single point in their games against Iceland and Croatia, whilst Nigeria have fared slightly better with a win over Iceland followed by a defeat to Croatia.

There have been rumours of discontent in the Argentinian camp, with many reports that manager Sampaoli has lost the dressing room – with the Argentinian players allegedly choosing the team for match. 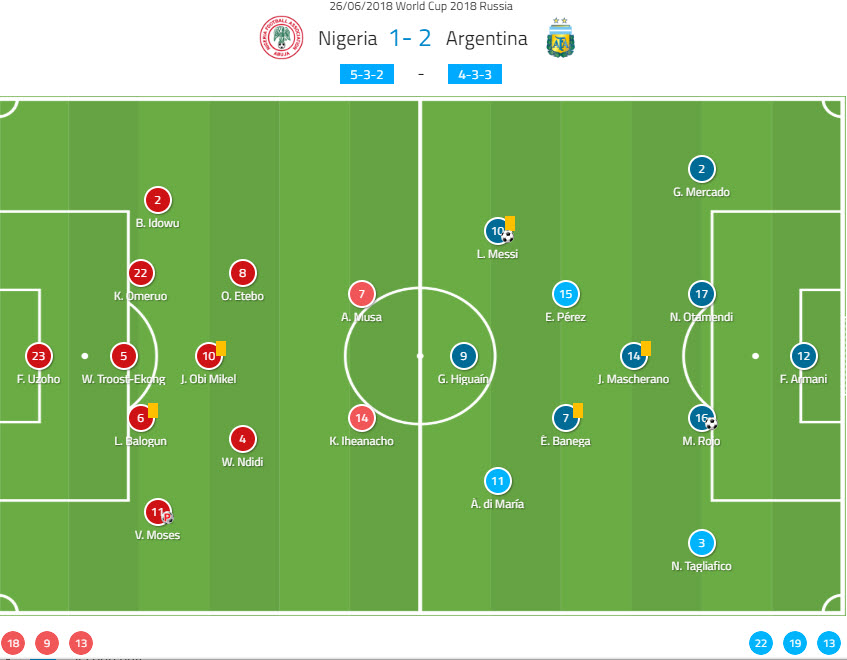 Nigeria stuck with the 3-5-2 that got them 3 points against Iceland in their last game and make no changes in the lineup. The 3 at the back along with John Obi Mikel and the tough tackling Wilfred Ndidi should provide defensive stability, whilst the pace of Iheanacho and Musa up front is enough to trouble most defences.

Argentina make x changes from the team that lost 3-0 to Croatia, switching from a 3-4-2-1 to a 4-4-2 (despite what the picture above says!) with goalkeeper Caballero being replaced by Franco Armani, with Marcos Acuna, Eduardo Salvio, Maximiliano Meza and Sergio Aguero also dropped to the bench with Marcos Rojo, Ever Banega, Gonzalo Higuain and Angel Di Maria replacing them.

Both Teams Struggle To Create Chances

Both teams really struggled to create any meaningful chances, with the goals coming from a penalty, a Messi wonder-goal and a cross to Rojo when Argentina had flooded the Nigerian box with players in the dying minutes of the game. Before Rojo’s winner though, Argentina had really struggled to work the ball up the pitch – shown by Higuain touching the ball just 28 times over the course of 90 minutes.

This wasn’t helped by the formation – Perez is not a winger and is usually played as a central midfielder, which showed during the game as he attempted 0 dribbles with all of his touches coming in a relatively deep position also unsurprisingly drifting slightly more central where he’s presumably more comfortable. The result of this meant that Argentina lacked options down the right-hand side, leaving just right-back Mercado to bomb forward on the overlap. 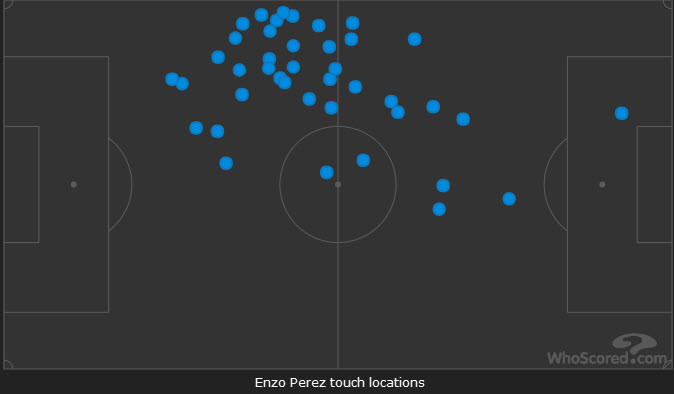 When this happens it’s likely the full-back has little option but to cross the ball, which is exactly what happened – with Mercado attempting 4 crosses (the highest in the match). Both Higuain and Messi aren’t renowned for their aerial ability (although Higuain is definitely no slouch in the air) – especially when outnumbered in the box by Nigeria’s 3 man defence. I initially thought this would be rectified by Messi’s genius and preference to often drop deeper to receive the ball, which he did plenty of times during the match – having the third most touches of the ball the most in the Argentina side (after Mascherano and Banega), I thought this may stretch the Nigerian defence causing gaps for the likes of Higuain and Di Maria to exploit, but not even the genius of Messi could create space to play in the other attacking options in the team with the solid Nigerian midfield. 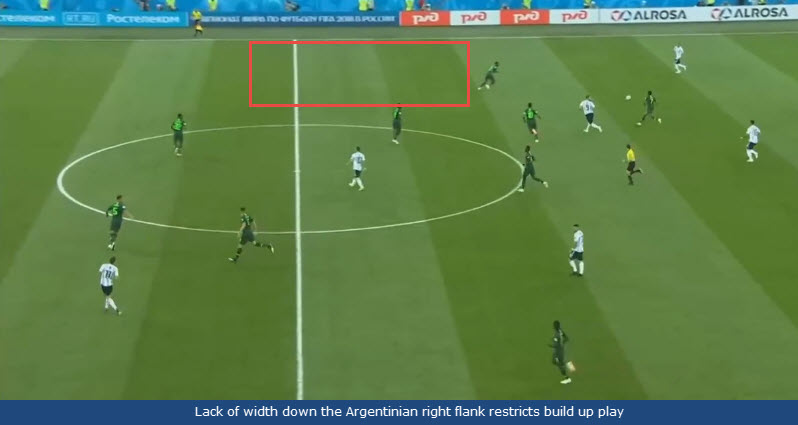 Nigeria also struggled to create meaningful chances due to playing a highly defensive midfield that obviously played relatively deep to restrict Argentina from playing their way up the pitch. This left Iheanacho and Musa completely isolated, instead being the target for long-balls up the pitch with the hope that their pace would cause trouble for Rojo and Otamendi, this gamble failed with Iheanacho replaced at half-time having touched the ball just 15 times. His replacement was Odion Ighalo, who didn’t fare much better with 19 touches of the ball in the second half of the match. You can see from the locations of Iheanacho, Ighalo and Musa below that they are rarely in threatening positions. 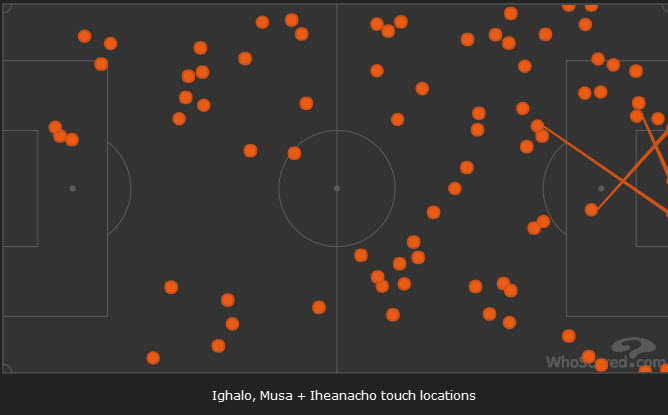 A very poor game in which Argentina were probably the deserved winners to see them through into the first knockout round. The game can accurately be summarised by looking at the xG for the game – 0.4 (+1 pen) for Nigeria vs 0.68 for Argentina, Argentina have had an incredibly poor tournament and it’s hard to see them progressing past the next round, nor is it likely to see Sampaoli carry on as Argentina manager after the tournament. His tactics have been poor, as has his team selection for the tournament which simply doesn’t suit his way of playing football. The one saving grace was Messi’s sublime opening goal, which is one of my goals of the tournament so far – the first 2 touches are a thing of beauty, cushioning the ball with his thigh, before his next touch pushing the ball away from the defender allowing him to get a yard of pace on the defender, before finishing superbly.