After 28 years Three Lions reached the semifinals at a World Cup. In 1990 at Italy England with Lineker on board defeated Cameroon with a late goal in the extra time, now won easily by 2-0 against Sweden.

Janne Andersson’s side had a strong, firm defence which only had conceded 2 goals before (against Germany) this game. They use a 4-4-2 structure with a two four-man line with positioned closely to each other, however, they made a choice of not pressing the England backline – just occasionally -, thus England could circulate the ball without any problem. 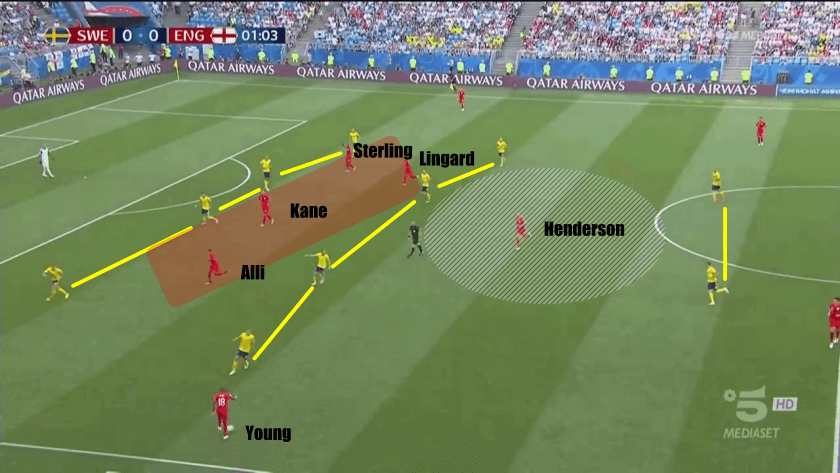 Also, notice that all the English attacking players: Kane, Sterling, Lingard, Alli were in between these two lines.

Moreover, when England tried to progress in the wings the opponent was shifting towards the ball side and closed downed the way. Forsberg (LW), Toivonen, Ekdal and Augustinson (LB) were defending that area as you see below. Toivonen (LS) marked Henderson and Ekdal (CM) maintained a close proximity to Lingard. Therefore, England had to recirculate the ball through the backline. 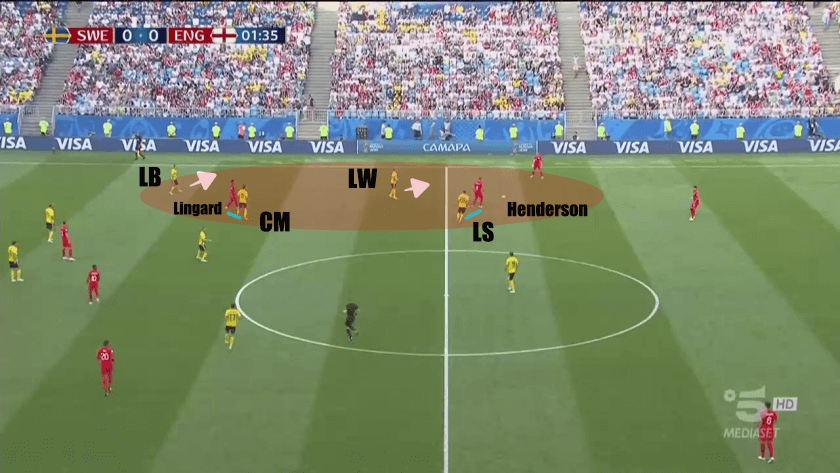 In the first period of the game, Gareth Southgate’s side did not find solutions for the Swedish defending manner. Sterling tried to drop to the midfield line to get a ball, but these attempts were ineffective due to the incoming pressure when Sterling received the ball, thus he had to pass back. 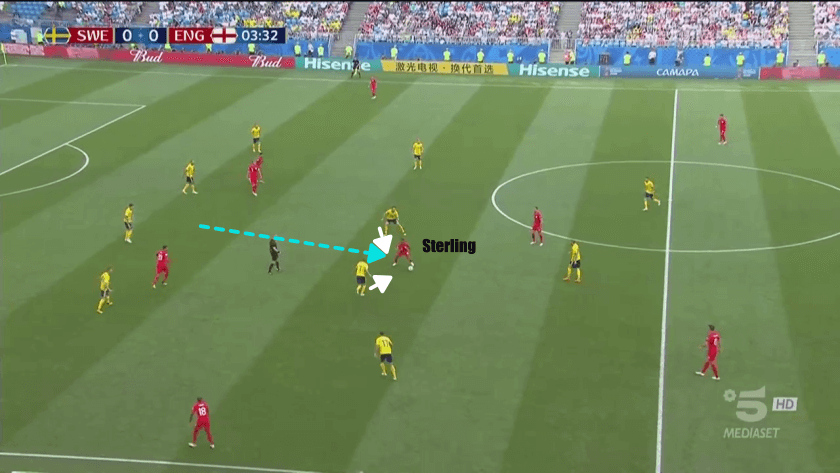 Around the ninth minutes, Lingard started to drop between the opponent’s midfield and attacker line, besides Henderson, whilst Kane, Alli and Sterling stayed in position. In reaction to that, Sweden narrowed their last two line (midfield and attacker) in order to narrow the passing lane and limiting the space that the opponent’s players could use. Nevertheless, this opened up some space for Trippier and Young at the wings. 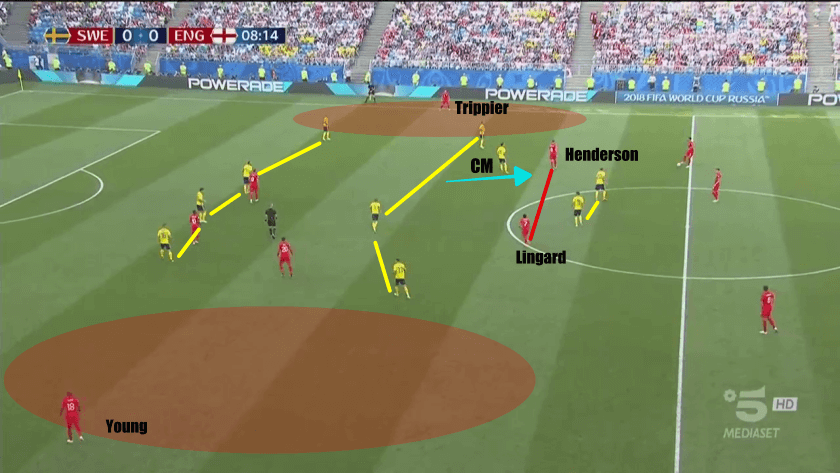 Although this made better circumstances for England, thus their attacking game slightly improved, but they were not able to create chances. Their biggest chances came in different ways. Firstly, in the whole first half, they could use counter-pressing really effectively. Surrounded the opponent’s ball-carrier right after they lose the ball, therefore they were retained in possession in a dangerous area, which led to some promising opportunity.

Secondly, England in the last 15 minutes of the first half started to use long balls to get behind the Swedish defence targeting Sterling, who positioned an edge of the offside-onside waiting for the opportunity. There were some big scoring chances, but he failed to scored. 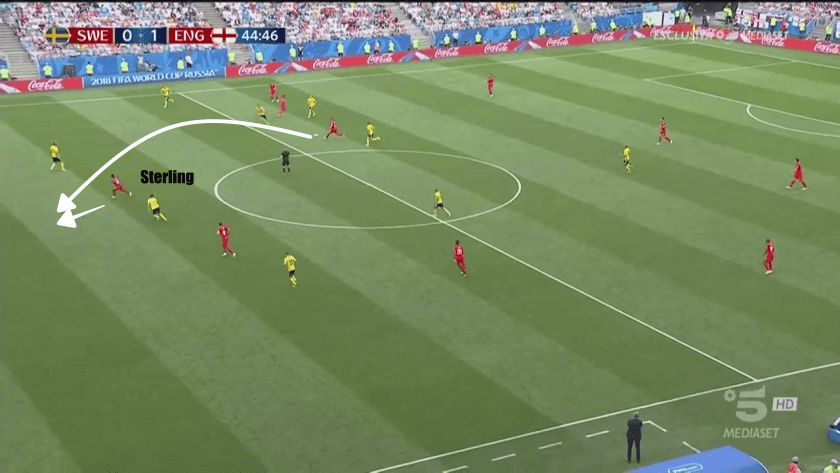 Southgate had thoroughly prepared his team

Meanwhile, England was seeking for ways in the opponent’s defence, Sweden hardly reaches the English penalty box during the first half. Due to the fact that England eliminated almost all the Swedish attacking attempts. Southgate ordered his team to paid attention to the volleys.

On contrary to Sweden, England used active pressing. As you see below, Kane and Sterling had a duty of pressing the ball-carrier and Alli marked one of the centre-midfielders. Also, interesting that Sweden pushed four players up. Usually, Toivonen, Berg, Forsberg and Claesson positioned high up in the pitch awaits for volleys. 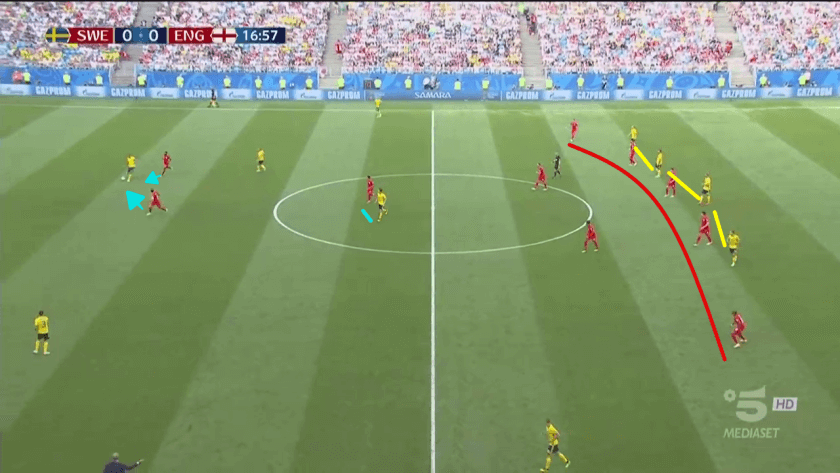 There was one situation when Sweden tried to take advantage of the opponent’s shape. As usual, England defended in a 5-3-2 shape and due to the four Swedish players high up, England had to use narrow backline in order to maintain a numerical superiority. Also, the 3 man midfield did not cover the whole area in width. Thus these two facts allowed Sweden to use the wing for progressing. 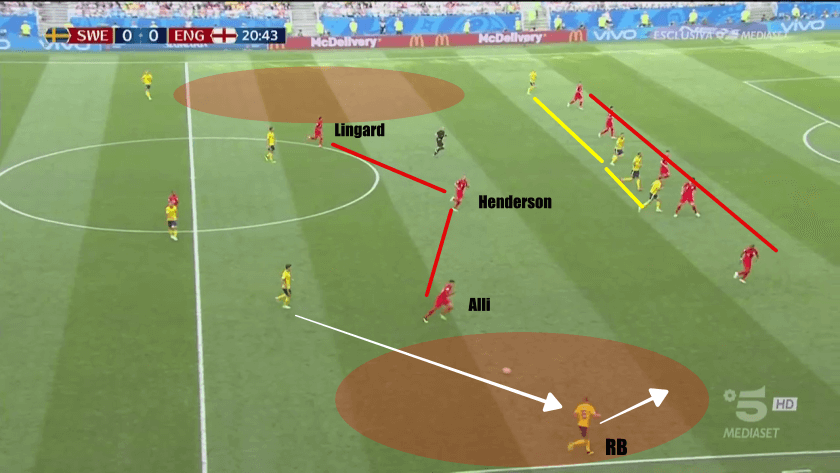 However, Alli with quick shifting towards Krafth he was able to cut off this opportunity.

Furthermore, there was a situation when one of the centre-backs made a bravery move. Lindelof progressed up in the field, then find a way to pass Claesson, who immediately passes to the wing to Krafth, who crossed to the centre of the box. With using this tool, Sweden could create more dangerous situations or even scoring chances. 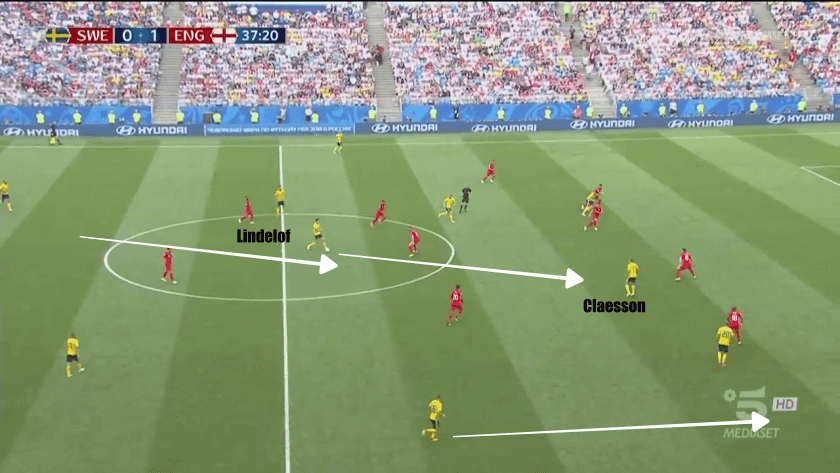 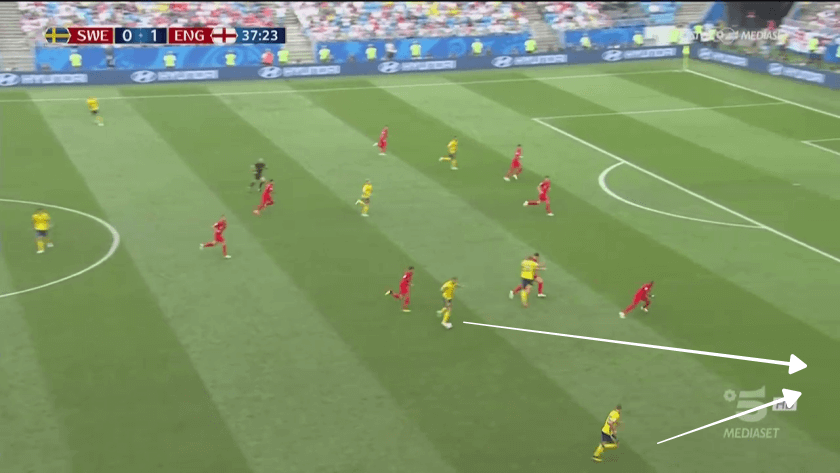 All about the corners

Southgate put some efforts into making their set-pieces highly effective, which paid off in the World Cup and as well in this match So, he worked out some patterns, that I am going to break down now.

Usually, three or four players positioned around the edge of the penalty box before the corner, as you can see in these several images. 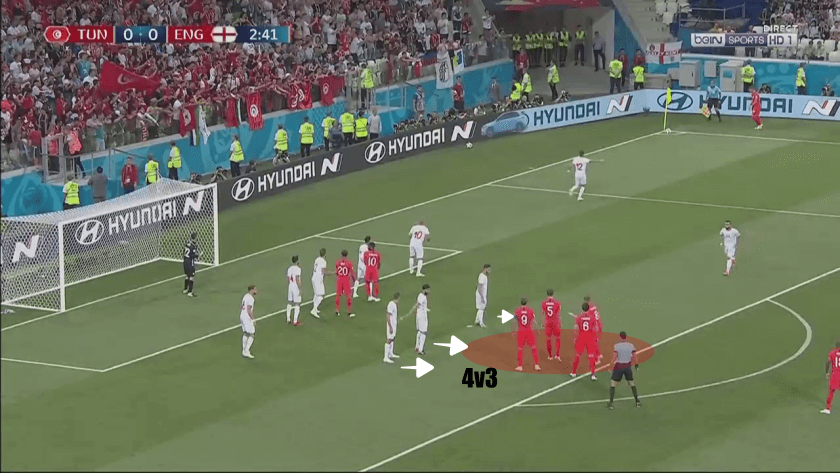 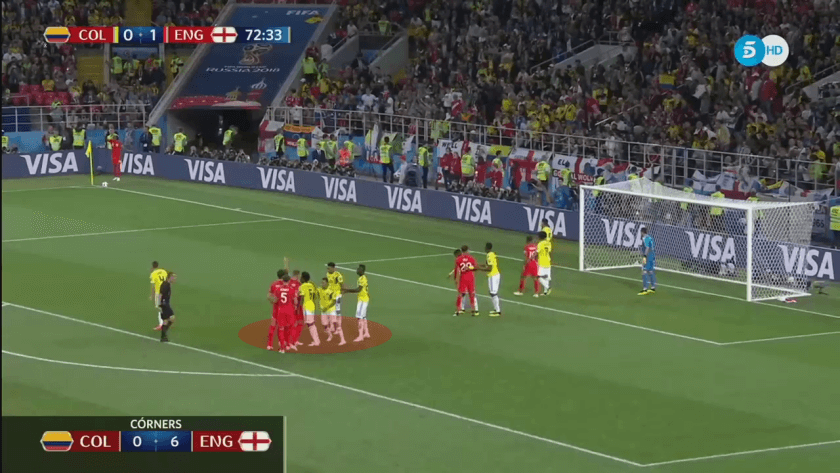 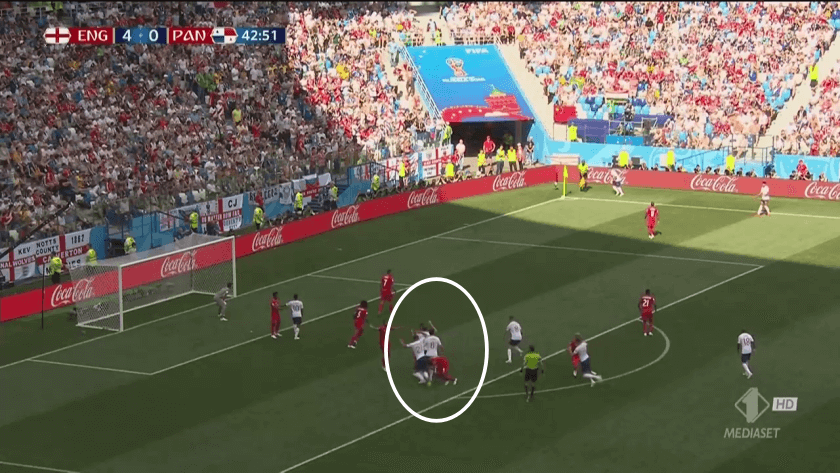 Kane, Henderson and Maguire always among these players. They tried to positioning really close to each other as a group in order to if the defender wants to mark it cannot be separate. The 1v1 pairs did not form before the crosses happening.

Then the system starts to work. Everyone run in different directions. 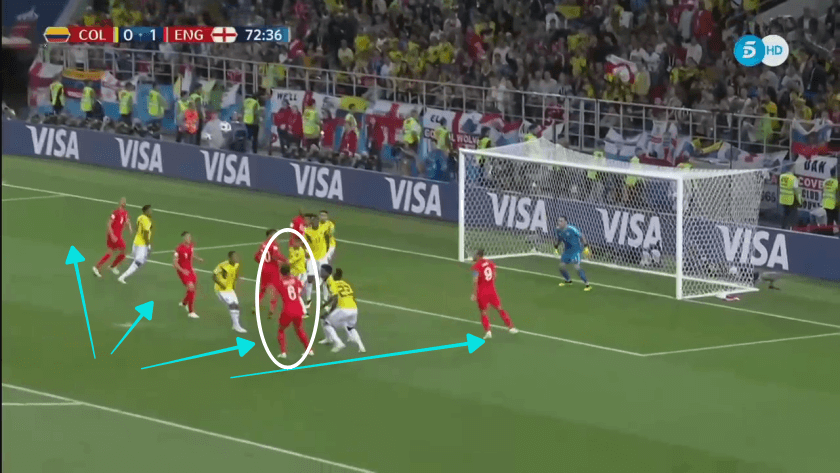 As you can see, against Columbia Kane, Stones, Henderson run differently in order to stretch the defensive shape and make space for Maguire, who always start his movement quickly than early in his movement suddenly change direction. Or he waits a second before starting his movement, whilst Kane and co. drag the defenders away. Thus it creates a free status for him for a header or matching with a defender with worse skillset. 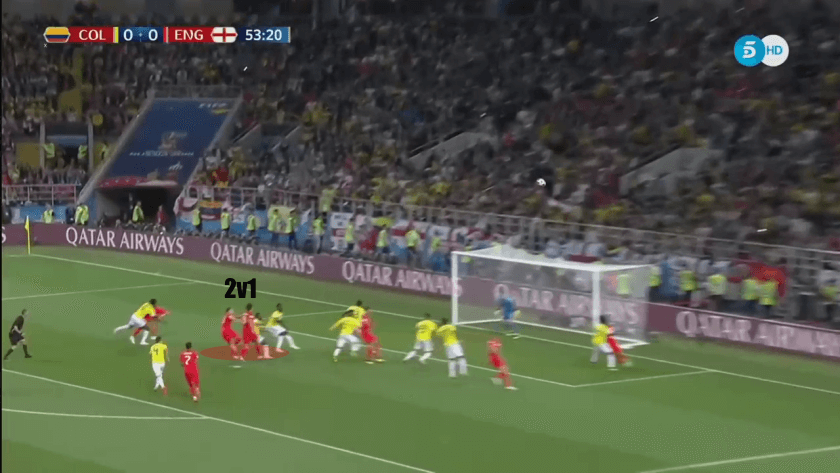 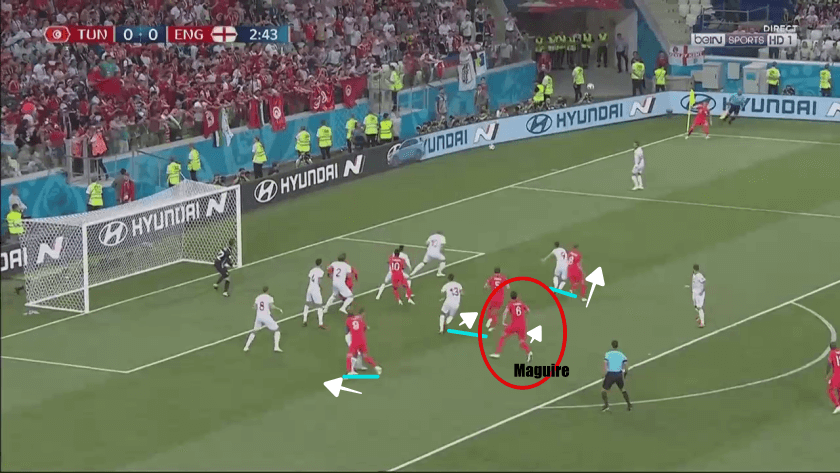 This happened against Tunisia, Columbia and also Sweden. As you see, the same pattern. The English players positioning in a group before the corner. Then Kane drags three defenders away, while Maguire moving towards the marker of Sterling, who was not be a good defender in this situation. 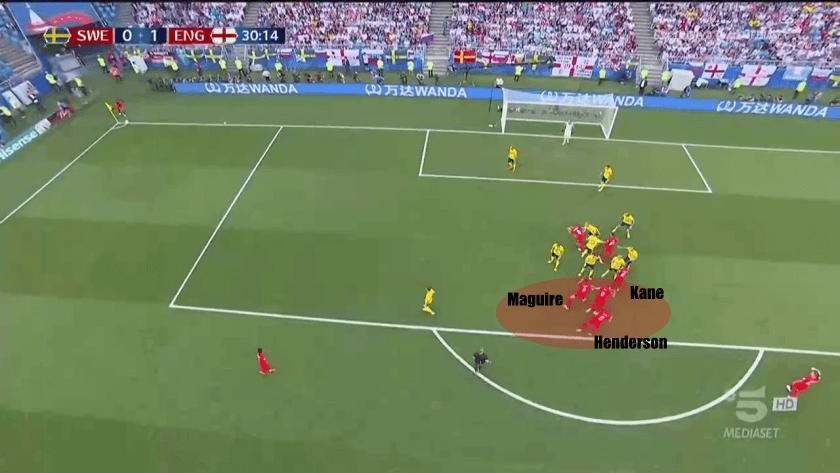 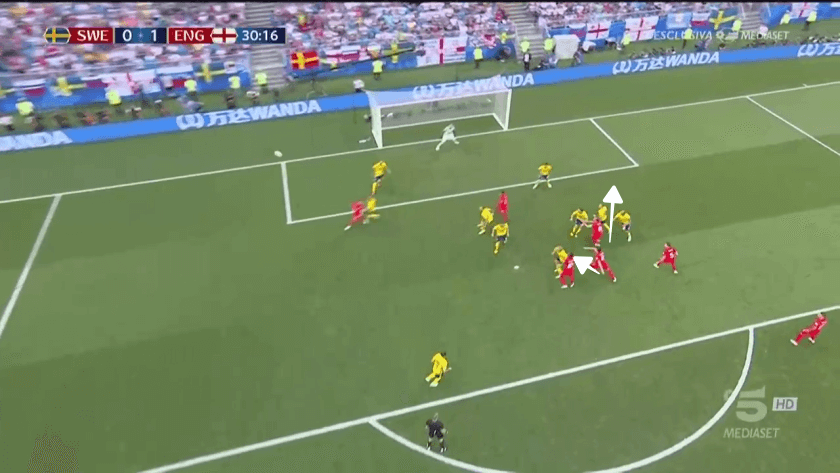 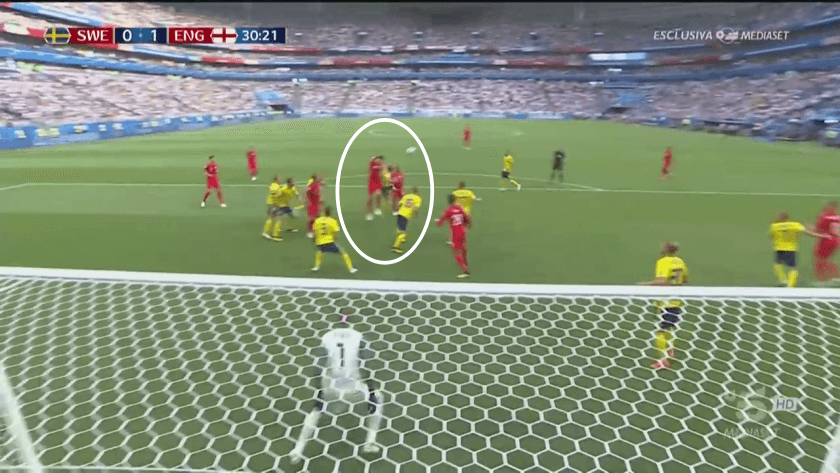 Despite the fact that this was not an exciting game, but the English fans must be happy with the result and the fact they made to the semifinals. Last time they were in that stage they loss against West Germany in a heartbreaking penalty shootout. Now, they will face with Croatia, which will be a really exciting clash.