Both teams were hoping to bounce back from surprise losses in their opening games, with Poland losing 2-1 to Senegal and Colombia losing 2-1 to Japan that wasn’t helped by conceding a penalty and having a man sent off within the first three minutes. A victory would mean each team stands a chance of qualifying for the next round, whereas defeat would mean the loser is unable to reach the knock-outs. 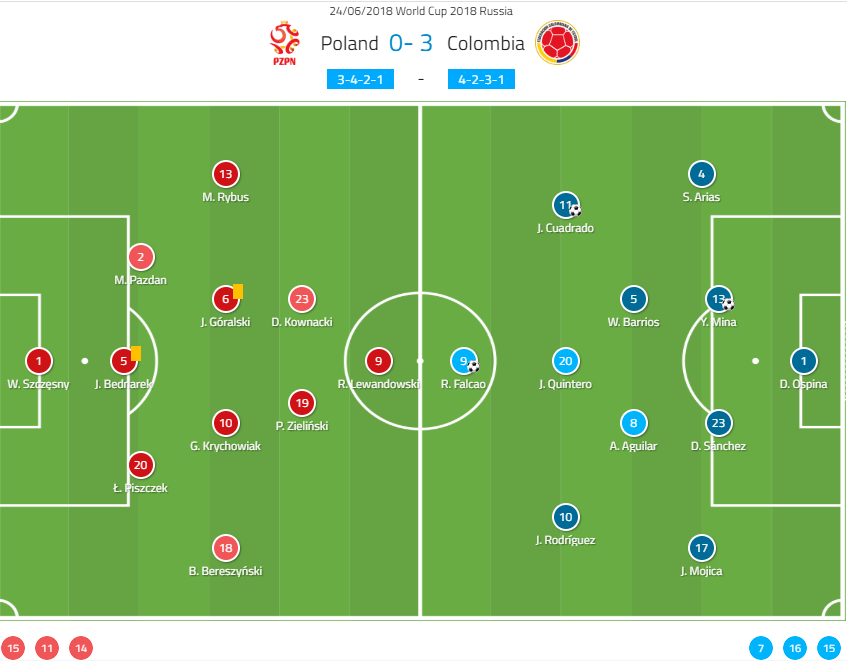 Poland made four changes from the team that lost to Senegal, with Thiago Cionek, Kamil Grosicki, Jakub Blaszczykowski and Arkadiusz Milik all dropped to the bench with Jan Bednarek, Jacek Goralski, Bartosz Bereszynski and Dawid Kownacki their replacements. Also notable was the switch from 4-2-3-1 to a 3-4-3 formation.

Colombia also made four changes including the enforced swap of Carlos Sanchez due to suspension after his red card against Japan, with Wilmar Barrios his replacement. Jefferson Lerma, Oscar Murillo and Jose Izquierdo also missed out, with Abel Aguilar, Yerry Mina coming in alongside Colombia’s main man James Rodriguez who made his first start of the tournament.

The main surprise when the lineups were announced was Poland’s change to a 3-4-3 formation – presumably done to try and get Lewandowski more involved as he had just 34 touches in the game against Senegal – with just four of those coming from inside the area (no shots in the area either). Below is a comparison of his touch locations, and we can see that this worked somewhat better, with a number of shots inside the area in good locations and a much better 57 touches. 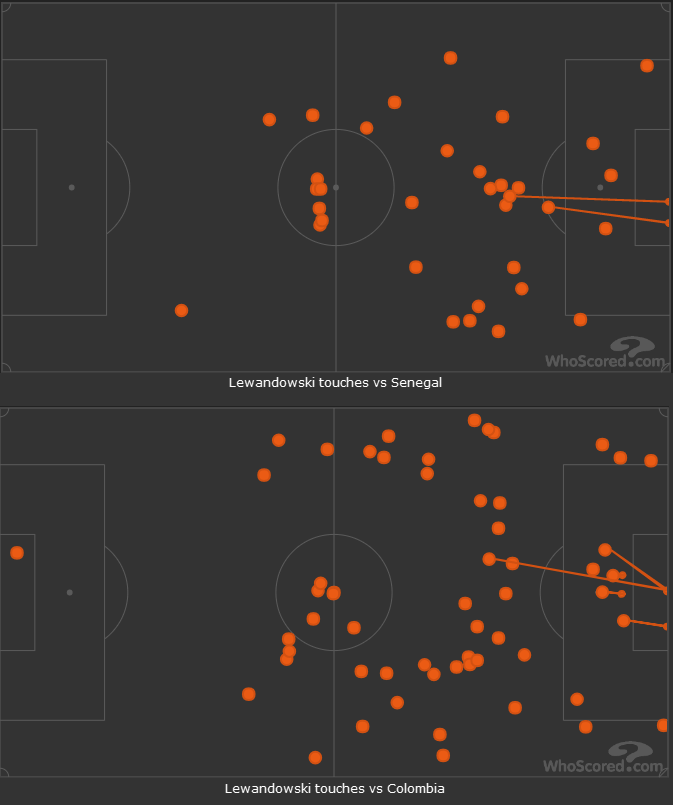 The build-up play also seemed slightly better, although Poland just couldn’t get the numbers forward in attack as often as they would’ve liked, with Colombia as a team showing immense work-rate to get numbers back whenever Poland worked the ball up the pitch – and with a lack of dribbling ability in wide areas, Poland’s creativity was somewhat stifled when working the ball into central areas, that they couldn’t find an answer to.

When looking at the scoreline it would be an easy assumption that Colombia annihilated Poland, but that wasn’t the case. Poland created chances and didn’t play as badly as the scoreline would suggest, with the xG rating from the excellent @11tegen11 on Twitters xG map shows the game was actually pretty balanced. 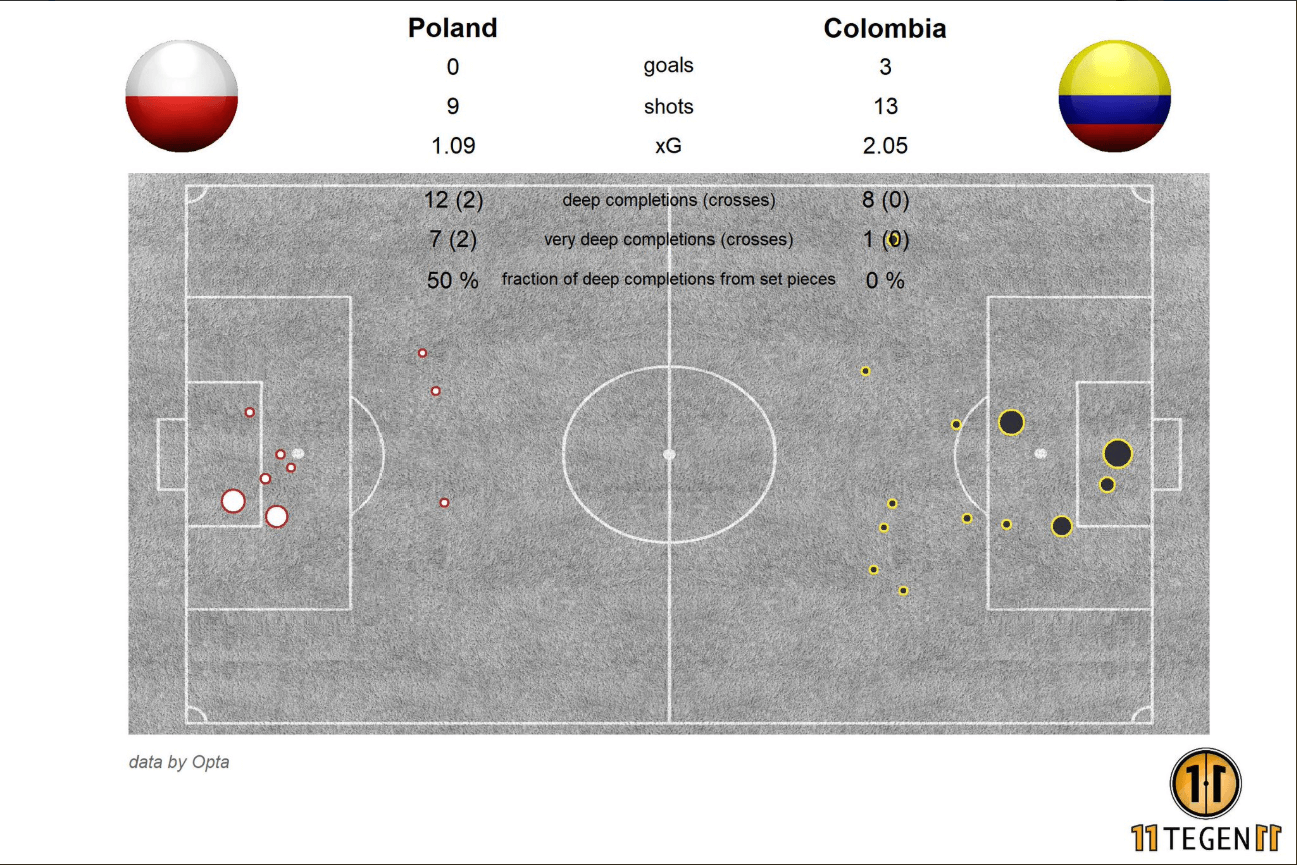 Looking below at the pass maps from the match (also by @11tegen11), we can see that the Poland formation was very well balanced and spaced, with Piszczek’s tendency to push forward shown, as he often linked up with the Polish midfield. 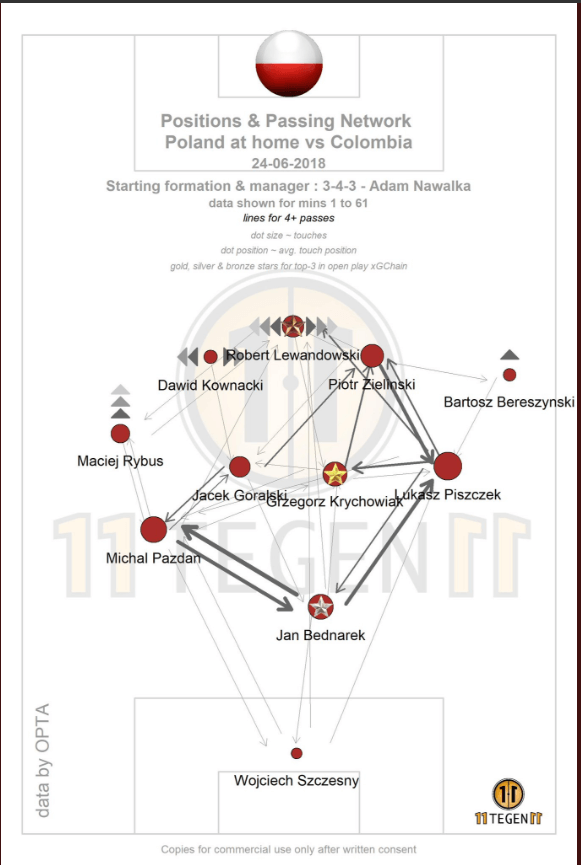 One thing that I really noticed throughout the match was how well Colombia used the ball, putting together some very nice passing moves on a number of occasions. The duo of Santiago Arias and Juan Cuadrado down the Colombian right-hand side, in particular, impressed me (although I had flagged Arias as one to watch in my Colombia preview) with their pace, ability to find space and general trickery causing plenty of problems for the Polish defence. 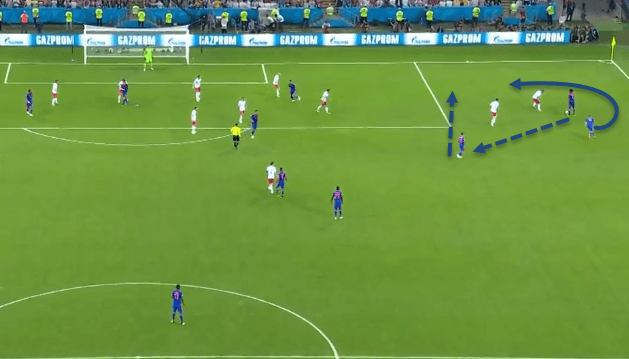 In the above example Cuadrado is on the ball, he signals for Arias to overlap which he does – drawing both defenders into Arias and the ball. This frees up space for Quintero who Cuadrado then plays in. Both defenders then rush to close down Quintero who simply plays a pass in behind the Polish defence for the overlapping Arias who finds himself perfectly positioned to deliver a ball into the box.

It soon became obvious that Arias was instrumental to the Colombian attack, with the rest of the Colombian defence helping to get him involved wherever possible. The centre-back closest to Arias (Mina) would often dribble the ball over to Arias’s side of the pitch – allowing Arias to push forward with Cuadrado which resulted in the Polish left-flank being pinned back against the threat Arias and Cuadrado posed.

I knew Group H would be tough to call (as I wrote in my pre-tournament previews of Senegal, Japan and Colombia), but I certainly hadn’t expected Poland to collect no points from their first two games. Poland weren’t as bad as the scoreline may suggest although the change in formation does remove a lot of the positive players in the side. But it will certainly be food for thought for Poland in the future. Colombia were highly entertaining as ever and certainly deserved their title as group winners.