The 2018 World Cup has thrown up some intriguing groups, though none are as even as Group H. With top seeds Poland drawn with Colombia, Japan and Senegal, there was little pre-tournament certainty regarding which of these four teams would make it to the last 16.

Senegal’s 2-1 win over Poland in the opening round of fixtures was, therefore, not that much of a surprise. While Adam Nawalka’s Polish side reached the last eight of the 2016 European Championship, here they fell to an extremely organised outfit featuring a number of talented individuals plying their trade at the highest level. 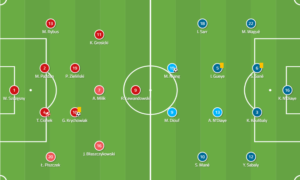 Poland were without central defensive inspiration Kamil Glik, so Thiago Cionek stepped in to partner Michal Pazdan at the heart of their back four. Nawalka, as expected, went with a 4-4-2 system that was led by one of the competition’s most exciting strike pairings – Bayern Munich’s Robert Lewandowksi and Napoli’s Arek Milik.

Senegal also went with a 4-4-2 system, with manager Aliou Cisse preferring M’Baye Niang and Mame Biram Diouf up front ahead of Monaco’s Keita Balde Diao. The only other surprise was that the highly rated Ismaila Sarr started on the right-hand side of the midfield four, with Liverpool star Sadio Mane on the opposite flank.

Both teams decided on 4-4-2 defensive setups, though the way they behaved within those shapes was vastly different. While Senegal hunted the ball down and were aggressive in their approach, Poland were more passive and willing to sit back.

Cisse has implemented a man-oriented midfield pressing game, something that paid dividends in this particular contest. Both forwards, Niang and Diouf, were instructed to press from inside out, covering the centre to force Polish build-up wide before pressing the ball-playing centre-back whilst simultaneously cutting off or discouraging sideways or diagonal passes back infield.

Whenever Poland did pass the ball into central midfield, either to Piotr Zielinski or to one of the strikers dropping back, the receiver was instantly pressured from behind by Idrissa Gueye or Alfred N’Diaye. With little time on the ball, said receiver was often forced to pass backwards, ensuring no progress was made. 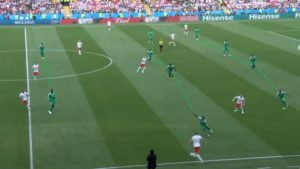 Poland, however, sat much deeper without possession. Lewandowski and Milik didn’t apply concerted pressure to Senegal’s first build-up line, while the midfield four dropped deep and shifted with a positional focus. Their collective emphasis was more on retention of shape than on pressing the ball.

So far the 2018 World Cup has been a triumph for solid defences, with few teams conceding many goals due to their organisation without the ball. This match was another case in point, as Poland struggled throughout to break down Senegal’s defensive block.

With both of their full-backs taking up high positions on the wings during build-up, Poland’s centre-backs faced a dangerous 2v2 situation against Senegal’s front two. To create numerical superiority and help bypass the first line of pressing, Grzegorz Krychowiak would drop deep to form a 3v2. Unfortunately the pressure of Senegal’s front two often led him to pass wide to his central defensive teammates, who were unable to penetrate due to a combination of their own limitations and structural issues. 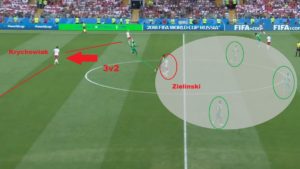 With Krychowiak dropping to play in front of Senegal’s defensive block, Poland were left with a worrying void in the centre. As seen above, Zielinski was often their only central presence up against two aggressively man-oriented Senegal central midfielders. Nawalka’s tactics meant his side could quite comfortably establish control of possession and play around the first line of pressing, but nothing more.

To make matters worse, the full-backs were almost totally inaccessible due to their high positioning. With Lukasz Piszczek and Maciej Rybus both pushing high in build-up, the distance between them and the centre-backs was increased. However, with Senegal’s wingers positioning themselves close by so as to press man-to-man when the ball came their way, Piszczek and Rybus were regularly removed as passing options. 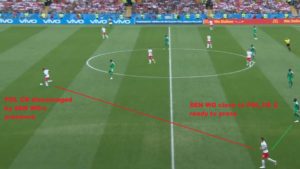 Senegal’s attacking strategy was fairly simple and risk-averse – get the ball wide to the most creative players on the pitch. In Mane and Sarr they started with two wingers who provide pace, skill and imagination, so whenever Cisse’s side had possession they looked to the wider areas for these players to dribble at their opposite men.

Often the full-backs, Moussa Wague and Youssouf Sabaly, would push on to create 2v2 situations down their wing, and occasionally Niang would drift wide to the left in order to try and combine with Mane and Sabaly down that side.

Senegal had a similar idea in attacking transitions. When they won the ball back they didn’t look to establish possession or build an orchestrated counter; rather, they would again target the wings and look for Mane, Niang and Sarr to dribble forward or inside, hopefully in a 1v1 situation and with plenty of space to exploit.

Going in 1-0 down at half-time, Nawalka didn’t wait to make changes to his system, substituting Jakub Blaszczykowski for Jan Bednarek. By bringing on another centre-back he was able to ensure Poland had the same 3v2 in build-up situations, however, Krychowiak was no longer required to drop deep, meaning he could stay central and offer another option between Senegal’s first two lines of pressure.

Switching to a back three also enabled the full-backs to take up higher positions down the wings. This, in turn, meant Poland were able to add another option between Senegal’s defence and midfield lines, with Kamil Grosicki (depicted below) moving inside along with Lewandowski and Milik. 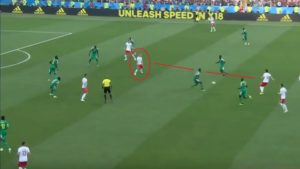 While their possession improved slightly with the greater central presence given by their change to a 3-4-3 system, Poland still struggled to create chances against an increasingly deep defensive opponent. They weren’t helped in this respect when Cisse, recognising the problems posed by the opposition’s tactical switch, brought on Cheikh N’Doye for Diouf just after the hour mark. This substitution saw the addition of a third central midfielder, which helped Senegal to close off the centre.

In the end, Poland enjoyed – or endured – 61 per cent of possession. However, their dominance of the ball was essentially by default, as Senegal were quite comfortable allowing their opposition to pass around them while defending the central spaces aggressively and in numbers.

Nawalka’s men may feel hard done by, but in truth, Cisse and his players carried out the better tactical plan on the day. And, having disposed of the top seeds in impressive fashion, Senegal now have an excellent chance of progressing to the knockout stages.