Despite the fact that there are many spectacular players in the attacking department of the Brazil team – like Neymar or Coutinho – Paulinho and Thiago Silva scored in the last match when Brazil faced with Serbia. In the last round of the group stages Serbia still had chances to proceed to the 16 teams and also had a possibility for Brazil to drop out, therefore their match still mattered, which predicted a big battle of the two teams. Looking back to the clash it was quite an easy win for Tite’s side. Let’s see why! 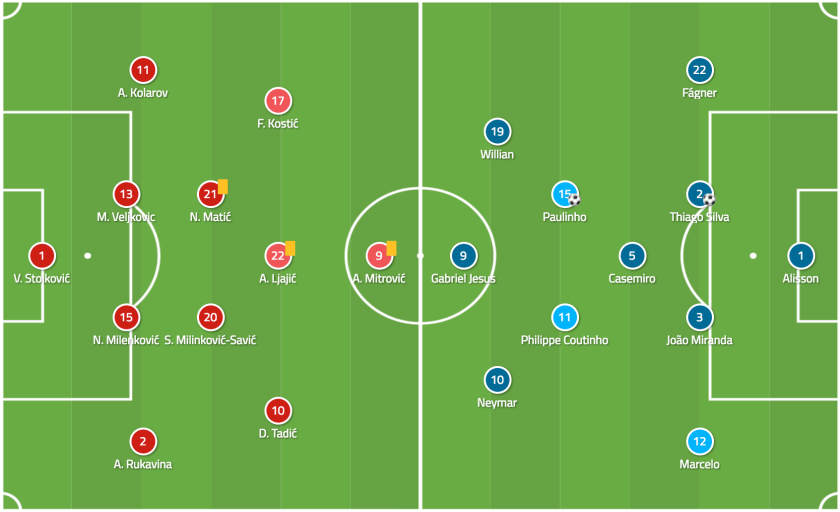 The fact that this match was important for both sides the coaches put the best XI to the pitch, there was no opportunity for resting and rotating. However, there were some changes in Serbia side, but Tite did not change in the winning recipe. They used their base 4-3-3 formation.

Serbia also used the regular 4-2-3-1 shape, but Rukavina replaced Ivanovic and Veljkovic Tosic. But the biggest difference was in connection with Milinkovic-Savic. He paired with Matic and Ljajic took the 10 space.

Mladen Krstajic’s man played with a rigorous and fairly aggressive manner aiming to discourage the opponent from combinative play. This had other benefits for Serbia because the aggressive manner led to some medical time, which broke the continuity of the game and of course it was better for Serbia. 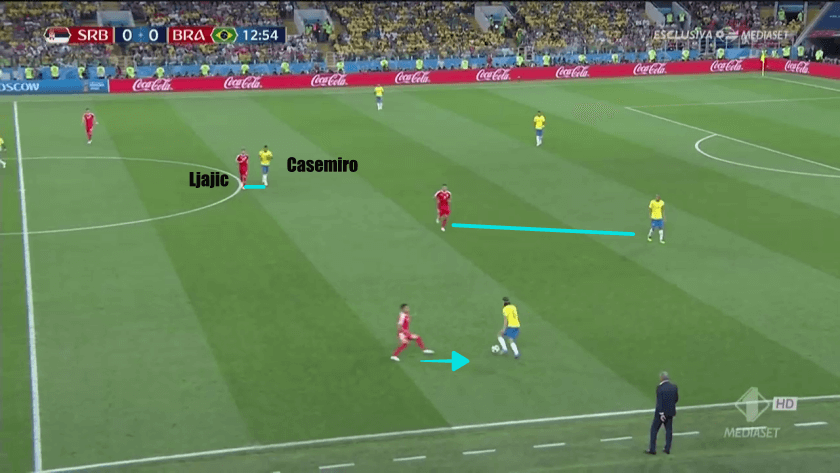 Serbia tried to cause trouble early in the Brazil progress. They used man-oriented approach during the pressing phase. They protected the centre with tight man marking then when the ball moved to the wing they shifted towards the wings.

However, the Serbian plan did not work entirely due to Brazil’s approach itself. Tite asked the fullbacks to stay deep during the build-up, thus Serbia was not able to stop the circulation. The four-man at the back allowed Brazil to pass fluidly. Furthermore, whilst Willian stayed high Neymar always positioned around the halfway line and near the touchline in order to help the build-up. Otherwise, positioning him near the touchline allowed him to make an isolated 1v1 situation where he can use his ability to breakthrough.

The base positioning of the teams. On Brazil side. asymmetric wing. Willian at a high position, while Neymar in deep. Also noticeable the Serbian 4-2-3-1 formation.

Brazil used Casemiro as a lone holding midfielder while Coutinho and Paulinho played higher, in the half spaces. Although the ball circulation was not broke due to the Serbian pressing, Brazil faced some issues higher up the field. Of course, Neymar has a big role in the team, thus Serbian also highly paid attention to him. Right after he got the ball the respective fullback, Rukavina immediately closing down him and also the ball sided winger, Tadic joined to Rukavina and helped to make a 2v1 situation, which much difficult to bypass. 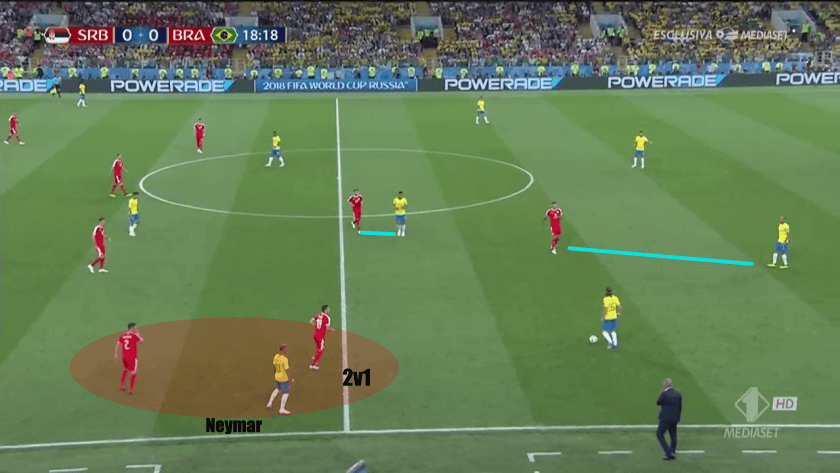 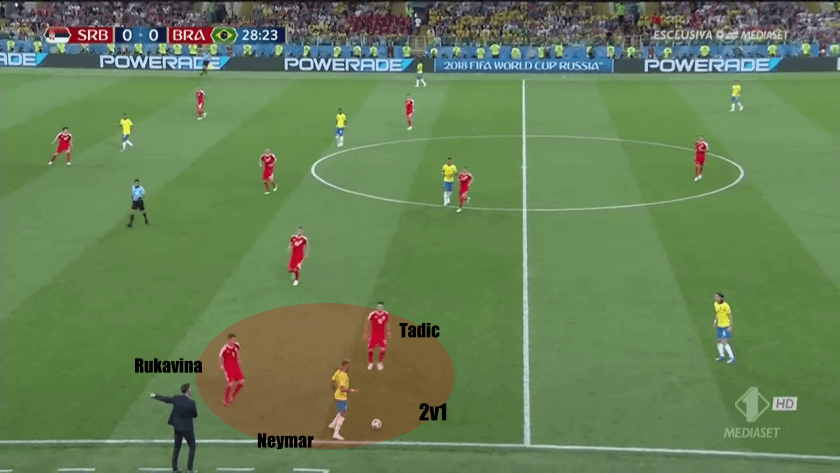 There were some patterns that Tite’s men used to beat the opponent’s pressing. Firstly, they often tried to pass directly to the 8 or 10 space. As you can see below Serbia had superiority in the middle with Milinkovic-Savic, Matic and Ljajic, but with the dropping forwarder receiving the pass, thus it was an effective tool. 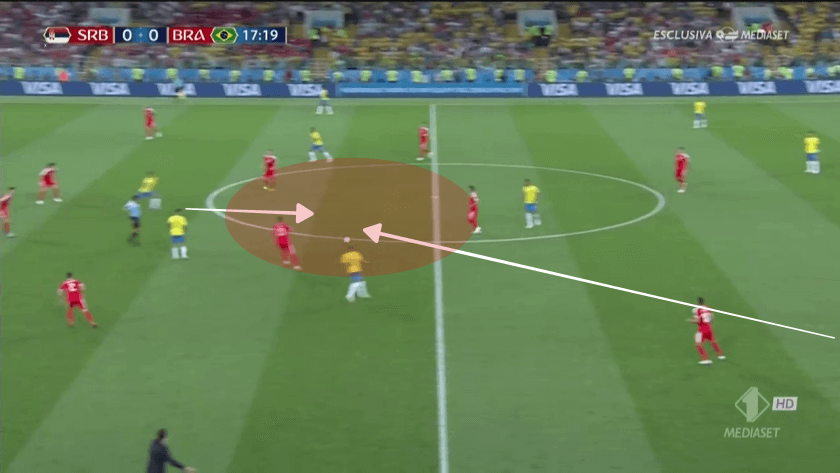 On other occasions the fullback – firstly Marcelo then Filipe Luis – used long balls to get behind the Serbian defence. Targeting Gabriel Jesus, who stayed on the edge of the offside-onside. 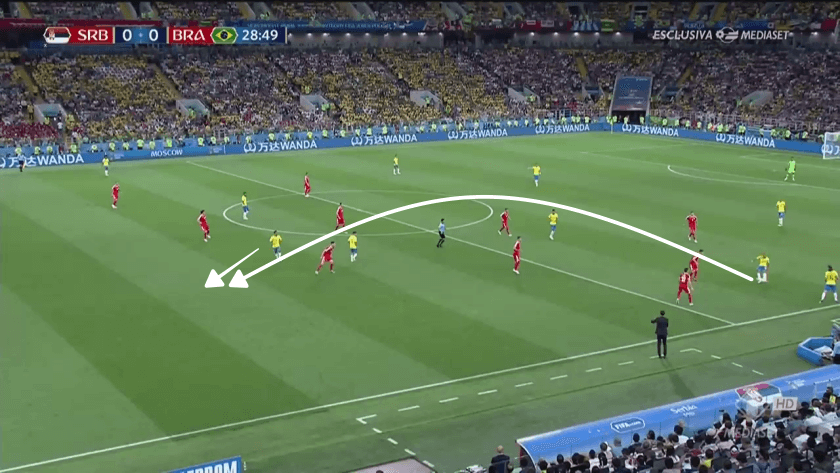 In other situations, Coutinho could find space behind the opponent’s defence. Also, there was a huge mistake from the Serbian defenders. Rukavina and Tadic moving towards the wing to press the Brazilian players and neither Milinkovic-Savic or Milenkovic did not track Countinho’s movement, thus he could receiving the pass freely. 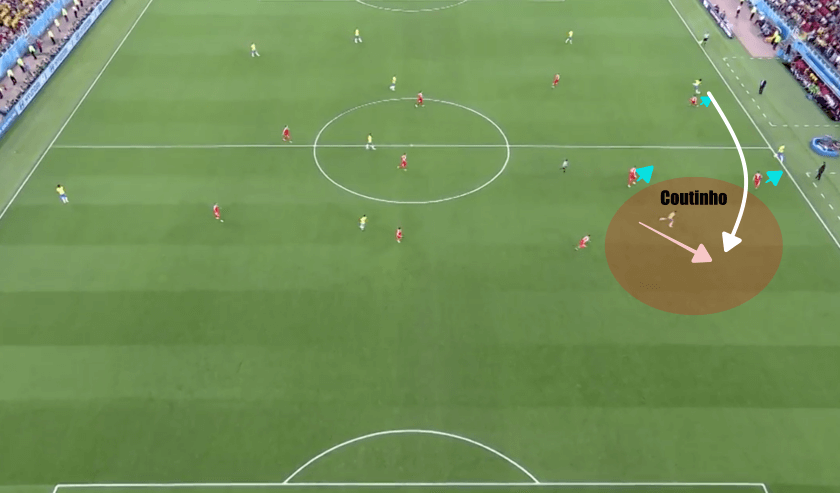 A same happened earlier in the first half. Coutinho in a big role, but there was a combative way in this case.

It was highly interesting how Brazil could score their first goal. In this meeting with great movement from Jesus who dragged the far sided centre defender out of his position. This manoeuvre made a huge gap between the left fullback and the left centre-back and this was the space where Paulinho run into. 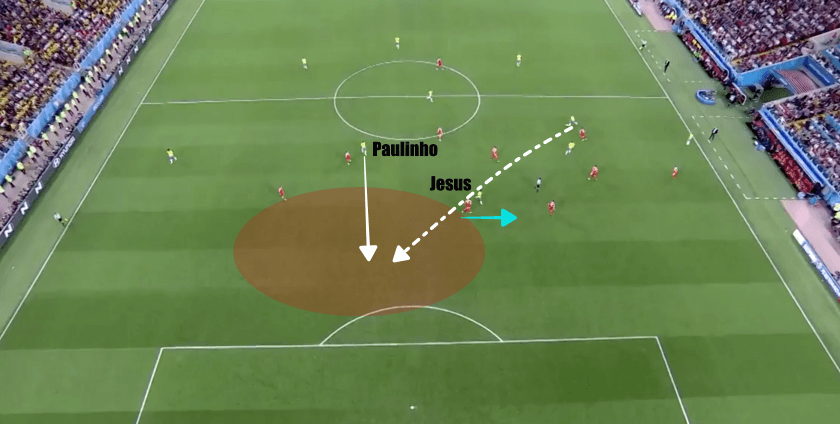 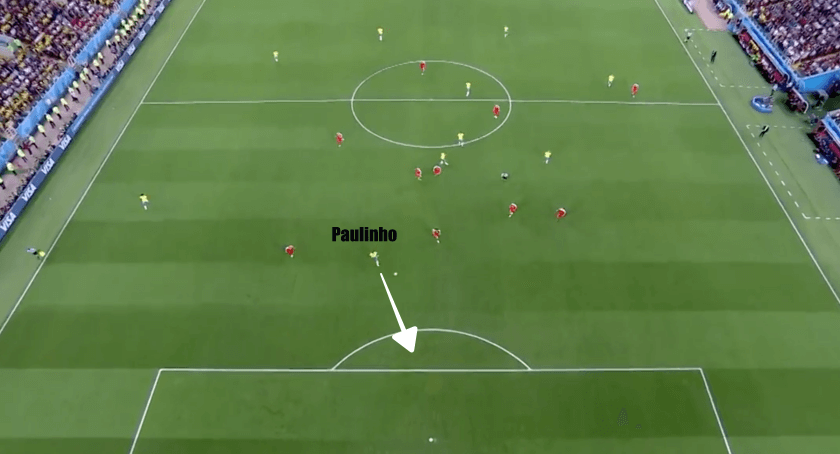 Due to the opponent’s dominant play, they had to rely on their counter-attacking play and their essential elements of the attacking game, the crosses.

Using their heights as a strength is a good base for crosses, however Thiago Silva and co. handling these situations pretty well. So, the Serbian crosses were not causing really dangerous situations. Milinkovic-Savic playing in a deeper position is can be one of the reasons for the unsuccessful attacking game.

One of Serbia’s most interesting situations. Dragging out the Brazilian defence with overloading one side. This showed one flaw in the Brazil defence.

On the other hand, their counter-attack also did not threaten truly the Brazilian goal. Casemiro played as a lone holding midfielder with the major task of closing down the opponent’s attempts. Besides the fact that it is fit for the Brazilian midfielder, he got some help from the fullbacks. Fagner and Filipe Luis moved infield to cover the area and prevent the Serbian quick attacks.

Brazil made to last 16 without a major problem and they truly deserved that. Although the difficult part of the tournaments just come now. They will face with Mexico in the next round. If Tite’s key players will give their best they are capable of winning the World Cup 2018.