Earning six straight points without conceding any goal yet, Uruguay along with the host Russia became the first to qualify for the next round of FIFA World Cup 2018. Saudi Arabia, on the other hand, had to pay the cost of their lack of quality strikers as they are yet to score since their opening kickoff in Russia 2018.

Uruguay played with their usual 4-4-2 set up with Suarez and Cavani at the front end. The fullbacks Varela and Cáceres were meant to stop the advancing opponent fullbacks at the respective flanks while going up the front in the offensive phases to join their advanced teammates.

Saudi Arabia played with 4-1-4-1 with Al-Owais as the goalkeeper now as opposed to Al Mayouf who conceded 5 goals against Russia last week. The fixture also replaced the winger Al-Shehri with Sultan Babhir as the former showed weak ball handling against Russia last week. Besides, Fahad Al-Muwallad was deployed at the front end with Babhir from the left wing also cutting deep to join the more advanced region as the former would often have to drop back to join the play or collect the ball.

Saudi Arabia started with mid to high press by the start of the match. They put a heavy check on Uruguay players. Their press and defensive coverage up till the half line caused Uruguay to lose possession whenever the latter tried penetrating through the deeper zones.

Unlike their game against Russia, Saudi Arabia was able to hold their play in Uruguay’s half. They also demonstrated a compact passing structure to retain the possession unlike producing loose touches in their opening fixture. Otayf served his role as buffer well and facilitated distribution of the ball across the planes. In fact, Saudi Arabia’s consistent hold in the opponent half and the ability to recover forced Uruguay to sit back in their own half for the first quarter of the game.

Not only this, Uruguay had to use the flanks to make their way up the pitch via wide plays. The wingers and fullbacks remained at the width while the centre mids remained deep. Though still, with Suarez multi-pressed and the centrally compressed defence they were less likely to cut into the opponent box in the first quarter.

Even when Cavani dropped into the passing lanes to allow his team to penetrate, Saudi Arabia’s defence pushed back and reduced the gap between the lines causing Uruguay to lose possession eventually.

As Saudi Arabia was dominating in Uruguay’s half in the first quarter this made the latter intensify their press deep in their defensive block. However, with most of the play now in Uruguay’s half, there were definitely dangers of quick penetration in the opponent half by Tabarez’s men during the transitions. And that’s what happened. Their quick, frequent penetrations put pressure on the opponents to worry about their defence now.

Among one of these instances, Cavani dropped in the passing lane as he had been doing. This was a good, timely move followed by a dangerous cross by Rodriguez which won Uruguay the goal-leading corner. As Uruguay possesses a pool of good finishers, it was very likely that their frequent penetration in the opponent half would put pressure on the latter causing Uruguay to win set pieces.

Despite having a prolonged retention in the opponent half, Saudi Arabia couldn’t convert any of their attempts. As they forced Uruguay to compress their defence in the first quarter, their wide players got open. Saudi Arabia’s attacking combination involved wingers to cut inside while fullbacks remaining wide. This allowed them in the first half to cut into Uruguay defence in multiple instances from their right flank.

The passing map, provided by @11tegen11 using Opta data, also shows that Saudi Arabia’s play is mostly shifted to the right. The fullbacks Al Shahrani and Al Burayk remained wide while the wingers dropped into their respective half spaces. 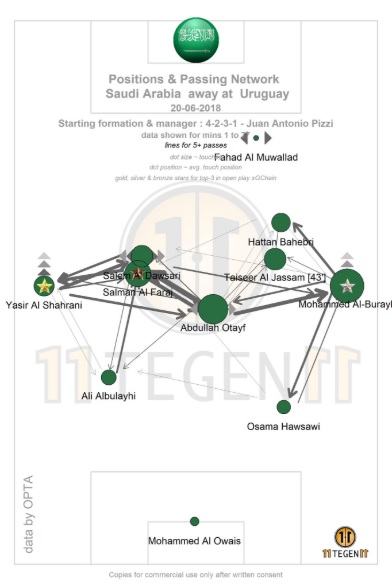 Yet, the losing team lacked the attacking partnership as well as the kind of finishers and dead ball specialist needed to hit the back of the net yet in Russia 2018 just once, even after Fahad replaced by Al Sahlawi in the final quarter.

As there was always a pressure to concede an equaliser with the whole second period of the game remaining, Uruguay couldn’t just sit back defending in their own half as they had opted to do in the first period. In the second period, Uruguay switched from defending deep within their half to attacking from the deeper zones into the opponent half.

With Laxalt subbed in for Rodriguez, Uruguay executed their passing plays in deeper zones. Laxalt cut into half-spaces to have Cáceres went up the width while connecting to the deeper teammates including the forwards – Suarez and Cavani. These movements to sustain in the deeper offensive zones enabled Uruguay to have more bodies in that region and keep up their threatening forward play.

The passing map by @11tegen11 also highlights Uruguay’s passing plays shifting towards deeper zones and half spaces with Cavani also dropping deep. The play was often shifted to the left half-space where Cáceres and Rodriguez contributed to most of the side’s offensive moves. 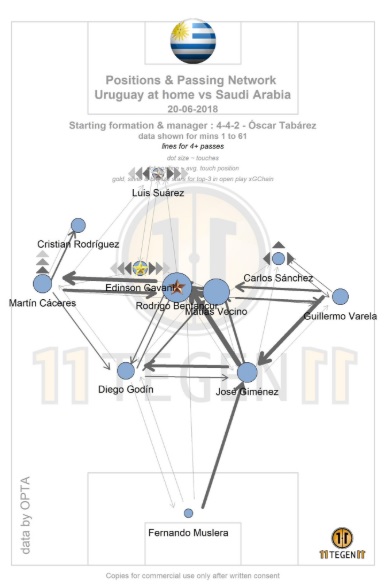 Uruguay’s deep attacking in their final third forced Saudi Arabia to sit back in their low block defence. Here again, the centrally compressed play – now in Saudi Arabia’s half – kept their wingers free at the width as in the first period of the game, but, the losing team still couldn’t execute any effective attacking moves from there.

In simpler words, Uruguay attacked deeply to defend their lead. Though they couldn’t double their lead, the strategy to deliver the attack in the deeper planes worked well to make Saudi Arabia worry about their defence at the back – and thus to sustain Uruguay’s lead.