Since its inception in 1993, the MLS has always been an attractive league for fans and players but the reasons have slowly changed over the years.

Until not so long ago, it was seen as a league in which top players went to prolong their careers and retire with a big contract. Some of the biggest ever EPL, La Liga and Serie A stars had spells in the USA, including David Beckham, Andrea Pirlo, Zlatan Ibrahimovic, Thierry Henry, Kaká, Wayne Rooney, David Villa, Frank Lampard or Didier Drogba just to name a few.

Those players helped the league to get attention and sponsors while raising the interest in football (soccer) in the USA. But in the last few years, the clubs are changing towards a more progressive way of conducting their business, looking to identify talent in undervalued leagues (mostly South America), develop it and sell it for a profit.

A league that back in the day paid high fees for players in the last stages of their careers like Defoe (31), Dempsey (30), Giovani dos Santos (28) or Robbie Keane (31) is now receiving even higher fees for young players they’ve previously acquired at a lower price.

The top-5 sales in the MLS history have happened in the last three seasons with Miguel Almirón being sold to Newcastle (€24m), Ricardo Pepi to Augsburg (€16.4m), Gonzalo Martínez to Al-Nassr (€16m), Alphonso Davies to Bayern (€10m) and Daryl Dike to West Brom (€8.6m). This is the result of a great recruitment and development strategy.

With the MLS 2022 starting today, in this data analysis, we’ll have a look at four U21 signings that could make a difference this season and become the next big transfer to a top league.

Thiago Almada is the best-known name in this data analysis. The 2001-born Argentinian attacking midfielder has been linked to clubs in Europe for a long time now and he’s been one of the highest-regarded wonderkids in videogames for some time too so he’s become a household name for lots of football fans.

Born in Buenos Aires, Almada came through Vélez Sarsfield’s academy and played exactly 100 official games for their first team, scoring 24 goals and registering 11 assists in all competitions. in 2021, he played 46 games (12 goals and 7 assists). He has represented Argentina at U20 and U23 levels but hasn’t made his senior international debut yet.

Atlanta United have paid €14.5m for him and have set a clause of just €25m so they could cash in on him very quickly if he does well. 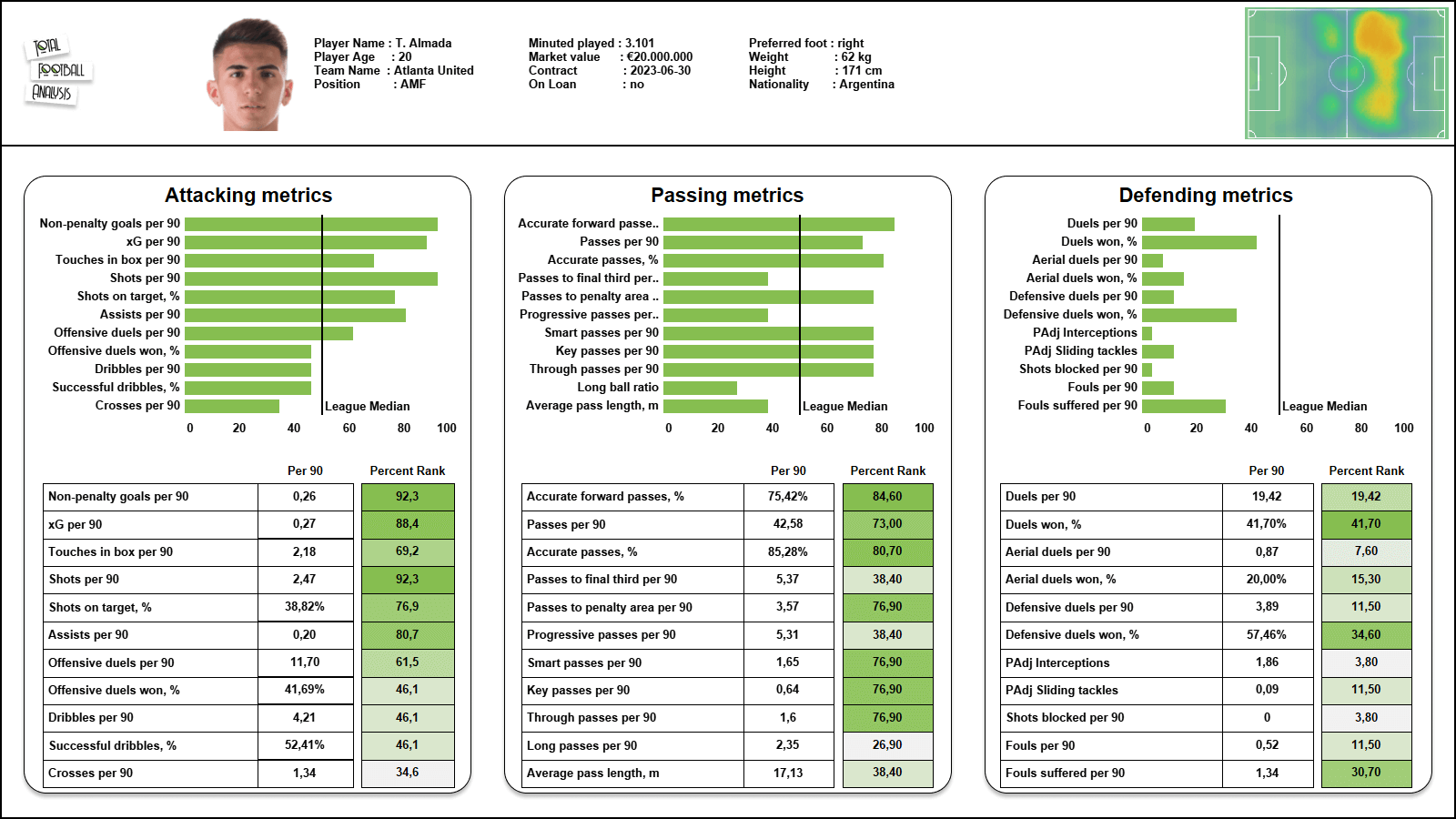 Almada stands out for his creativity and contribution in terms of goals and assists. In the last year, he averaged 0.26 non-penalty goals and 0.2 assists per 90, both among the best attacking midfielders in Argentina. He’s very active in and around the box, getting 2.47 shots and 2.18 touches in the box per 90.

He was present in most of Vélez’s attacking combinations as shown by his 42.58 passes per 90 and is excellent in quick combinations, which results in his excellent passing accuracy of 85.28%. Playing mostly in advanced areas near the box, he doesn’t register many progressive passes (just 5.31 per 90) but still is very creative with 1.6 through passes and 3.57 passes to the box per 90.

Despite being able to play wide if needed thanks to his agility and skill, Almada isn’t an outstanding dribbler (he completes 52.41% of the 4.21 dribbles he attempts per 90) and doesn’t defend too often as his just 3.89 defensive duels and 1.86 possession-adjusted interceptions per 90 show. This makes him more suited to a number 10 role with total freedom of movement.

After being linked very heavily to a move to clubs in the top leagues, especially Man City, it was finally Atlanta who decided to take the small Argentinian maestro. If he continues to show the form he showed for Vélez, it won’t be long until he makes the step to Europe.

Bongokuhle Hlongwane is a 2000-born South African forward who has raised through the leagues in his country very quickly. Aged 13, he started playing senior football for South African Breweries in the fourth division and he quickly got Maritzburg United’s attention and joined their youth ranks.

Since his debut for the first team aged just 18, Hlongwane went on to play 57 games for Maritzburg United in which he scored 8 goals and assisted another 6. In June 2021, he got his international debut for South Africa, starting and scoring in a friendly against Uganda. Since then, he has played 90 minutes in 6 out of the 7 games South Africa played (he played 45 minutes in the resting one) and scored another goal in a 1-0 victory over Ghana.

Minnesota United have paid €455k for him, which is the highest fee Maritzburg United have ever received. 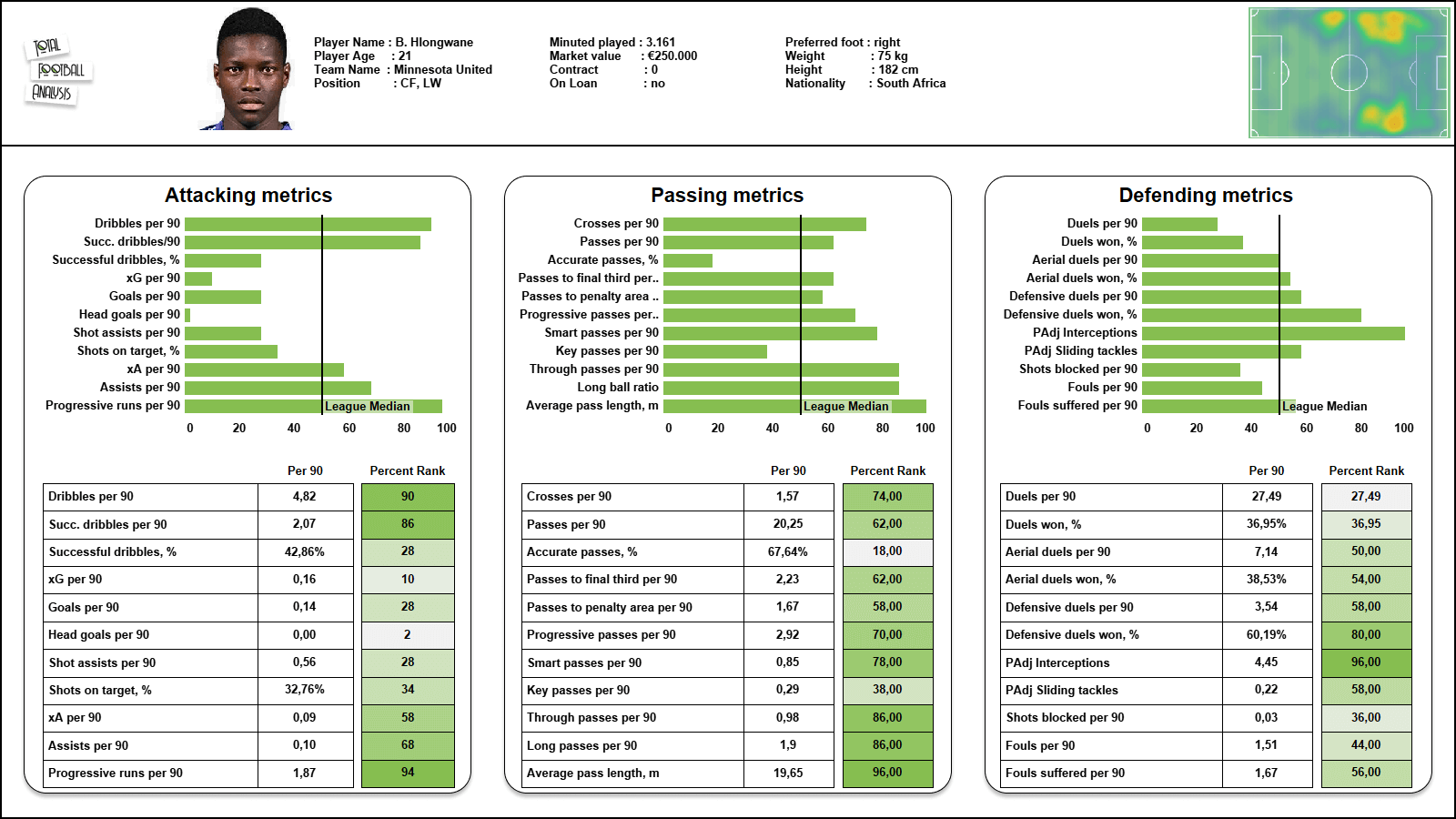 Standing at 1.82m / 5’11’’ Hlongwane is a mobile striker who likes to drift wide and can also start as a winger. He stands out for his ball-carrying and dribbling. He completed 2.07 dribbles and 1.87 progressive runs per 90, which are great numbers for a forward in the South African league.

But apart from his dribbling, Hlongwane also has the ability to create danger with his passes and crosses. He averaged 0.1 assists from 0.09 xA per 90 last year, mostly thanks to his 1.57 crosses per 90. His goal contribution is quite low for a striker with just 0.14 goals from 0.16 xG per 90 but it’s decent considering he moves wide a lot.

He can also get the ball into good areas as proven by his 2.92 progressive passes and 0.98 through passes per 90 and likes to play direct and long as evidenced by having one of the highest average passing lengths (19.65 meters) in the league.

His defensive contribution is also good, winning 60.19% of his 3.54 defensive duels per 90 and registering an excellent 4.45 possession-adjusted interceptions per 90.

After a rocketing career in South African football, the MLS will be a big challenge for Hlongwane as he leaves the country for the first time. His tenacious approach to the game and speed will be crucial in his adaptation and performances. He’s also the first South African to arrive at the MLS from the South African Premiership so he’ll have the responsibility of opening that path to other players in his country.

César Araújo is a 2001-born Uruguayan midfielder who came through Montevideo Wanderers’ academy and has only played for them at senior level so far.

Since making his debut in 2019 against Corinthians aged 18, he played 63 games for Montevideo Wanderers, registering 6 assists. He has been part of the Uruguay squad at U20 and senior levels but hasn’t made his debut for any of them yet.

Orlando City bought Araújo for €1.8m, which is just the seventh-highest fee Montevideo Wanderers has ever received. 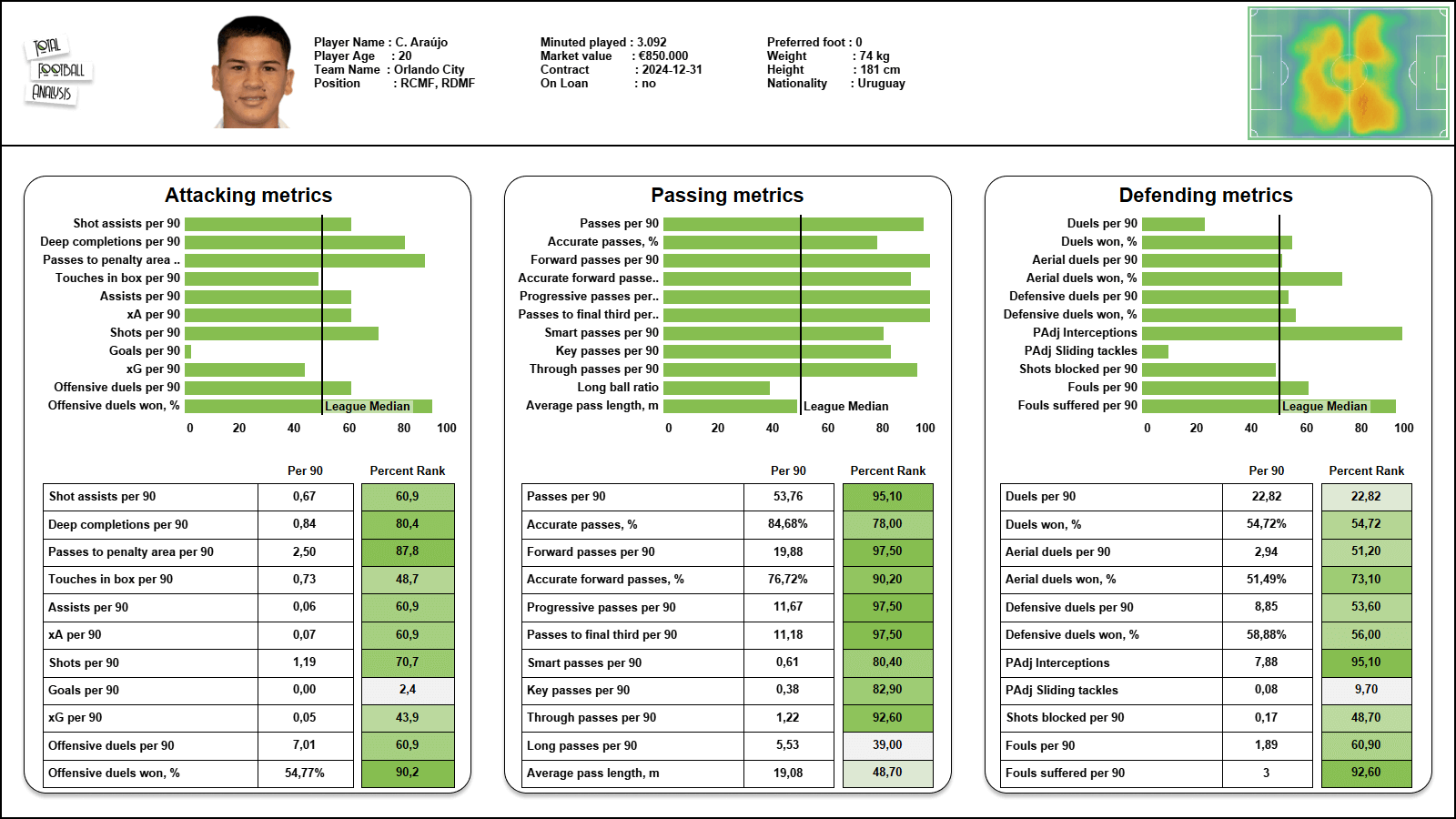 Araújo is a very complete central midfielder who stands out for his passing quality. The Uruguayan was the player who made Montevideo Wanderers work and was present in all their attacks with 53.76 passes per 90. He’s an excellent ball-progressor from deep with 11.67 progressive passes per 90 but can also get the ball into advanced positions. His 11.18 passes to the final third or 1.22 through passes per 90 were also among the very best in Uruguay.

Compared to the rest of the central midfielders in the Uruguayan Primera División, he also stood out in terms of creating chances and passing the ball into dangerous situations. His 0.38 key passes, 2.5 passes to the box and 0.84 deep completions led to 0.07 xA per 90, with all these statistics being excellent in his league. On top of that, his size (1.81m / 5’11’’) and skill make him a press-resistant player who wins 54.77% of his offensive duels and is fouled 3 times per 90.

If that wasn’t enough, Araújo also does very well in defence. He’s a very proactive defender who reads the game well as evidenced in his 7.88 possession-adjusted interceptions per 90. He also does well in the air, winning 51.49% of the 2.94 aerials per 90, and wins a quite decent 58.88% of his 8.85 defensive duels per 90.

In Araújo, Orlando get a complete central midfielder who can dominate thanks to his passing quality, work rate and physicality. With Uruguayans having performed very well in the MLS, he’s expected to contribute from the first moment and will be closely followed from Europe as a potential transfer target.

Roberto Voloder is a 2001-born German defender who also holds a Bosnian passport. He came through Köln’s academy but never made an official first-team appearance despite playing 27 games for their B team in the German fourth division.

In July 2021, he went to Maribor in Slovenia on loan and his performances in the 24 games he played for them this season were so good that they triggered the €100k buying option they had on January 1st. Less than a month later, Sporting Kansas City paid €1.8m for him.

Voloder played for Bosnia at U17, U18 and U19 levels but switched to Germany, where he played for the U19 national team and is now part of the U20 squad. 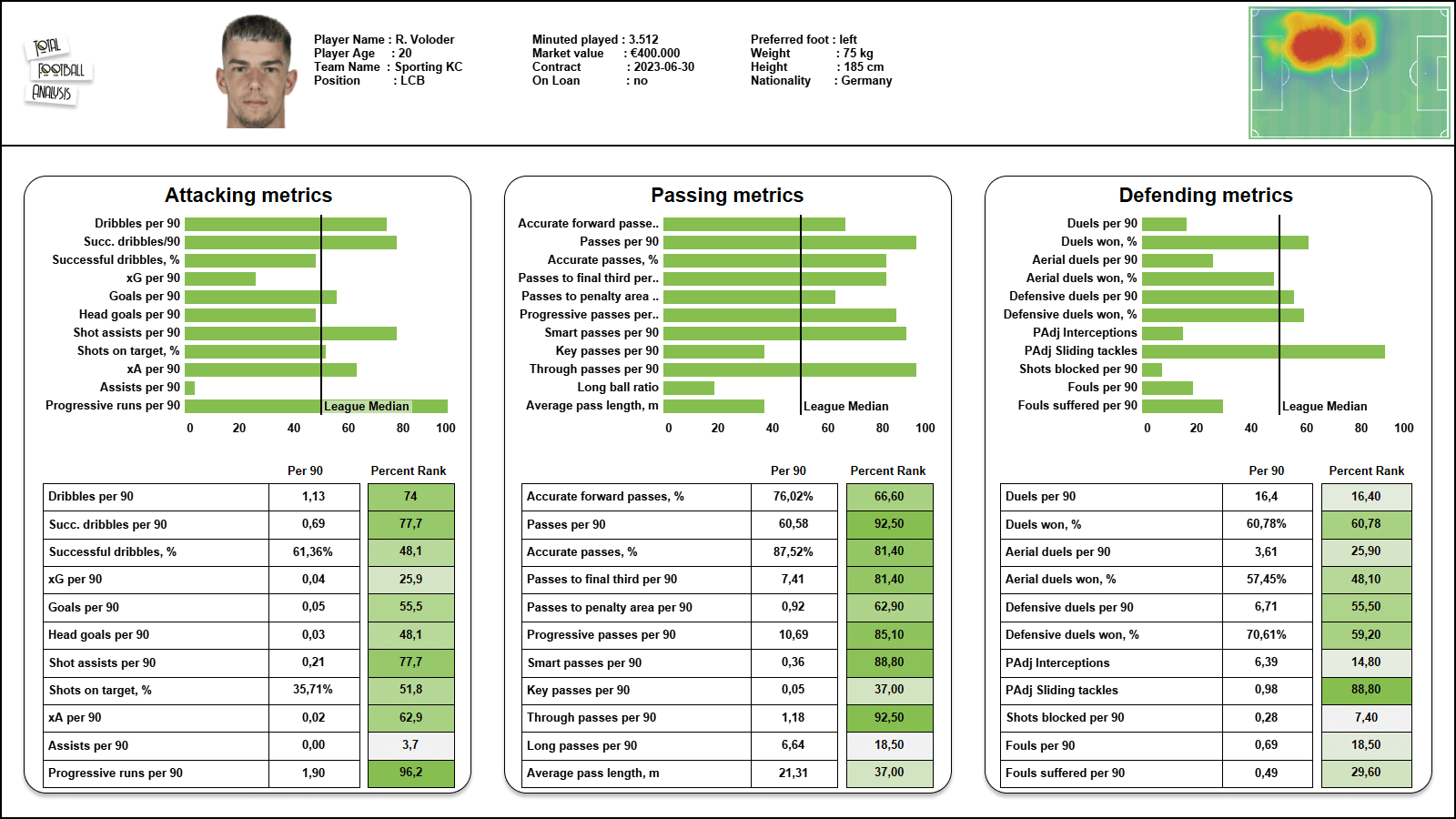 Voloder is a left-footed centre-back who’s excellent in possession and used to playing high up the pitch as evidenced in his heatmap. Playing for a very dominating team (Maribor are first in the Slovenian league at the moment of writing), his defensive stats look just ok. He wins 70.61% of his defensive duels, which is slightly above average, and odes ok in the air winning 57.45% of his just 3.61 aerial duels per 90. He really stands out in his possession-adjusted tackles with 0.98 per 90.

It’s on the ball where Voloder looks fantastic. As it’s normal playing for a great team, he’s on the ball a lot with 60.58 passes per 90. He’s excellent at getting the ball forward with 10.69 progressive passes and 1.9 progressive runs per 90. But he can also create when playing against low blocks. His 1.18 through passes and 7.41 passes to the final third show he can progress also into advanced positions and he even gets 0.21 shot assists per 90.

Left-footed centre-backs are a rare commodity in football, especially those with ball-playing qualities. For an MLS ream to get a German U20 international from the Slovenian champions is quite a statement about their transformation into a development league.

Sporting Kansas City finished third in the Western Conference in 2021 and they were one of the most possession-based teams in the league so Voroder should fit in immediately.

There were many other interesting young signings in the MLS this season but these four were especially interesting because of their data and precedence. With a modern and forward-thinking approach to scouting and recruitment, MLS clubs are taking players in very interesting markets that were monopolized by European clubs before.