Finding the “new Neymar” in Brazil is becoming something similar to finding the “new Messi” in Argentina. Every year, lots of players are tipped to be the next big thing in the best country in the world when it comes to producing elite players, but few of them live up to the expectations.

Kayky is the latest player to emerge as a future top star. According to recent reports, Man City have already agreed on a deal for the 2003-born winger, beating other European top clubs like FC Barcelona or Real Madrid. In this tactical analysis, we’ll take a look at Kayky and see what he could bring to Man City’s tactics.

Kayky is a left-footed winger who usually plays on the right side. His size is average for the position, standing at 175 cm / 5’9’’. He’s still a teenager and looks like one with his slim frame. Kayky’s pace and acceleration are incredible, especially with the ball at his feet. He’s quite light, allowing him to suddenly stop and accelerate and also to change directions with ease. Despite not being completely developed physically, his strength is not bad and uses his body quite well to shield the ball.

From the right-winger position, Kayky has a good mix of movements, drifting centrally to play between the lines and finishing lots of plays in good positions inside the box. He’s dynamic, runs in behind and doesn’t always want the ball to his feet, which is very important in modern wingers. Of course, he can still improve his positioning but he already understands the basics of the position and looks like a very coachable player.

He stands out as a phenomenal dribbler, attempting 8.48 dribbles per 90 and completing 78% of them. He’s very creative with the ball at his feet, spotting spaces to get past his opponents that other players wouldn’t. He also has the quality to assist and advance through quick combinations.

Despite having played very few senior matches, Kayky is already capable of making a difference and changing games. The comparisons with PSG’s Neymar are quite obvious as they share the technical ability and personality to take players on. Kayky also looks very similar to Neymar in his first seasons with his lightning pace and relatively small frame.

Below, we can see Kayky’s heatmap from his minutes with Fluminense’s first team. He usually intervenes close to the right-wing but he can also come inside and is a threatening presence on the right side of the box, from where he has scored his two goals so far. 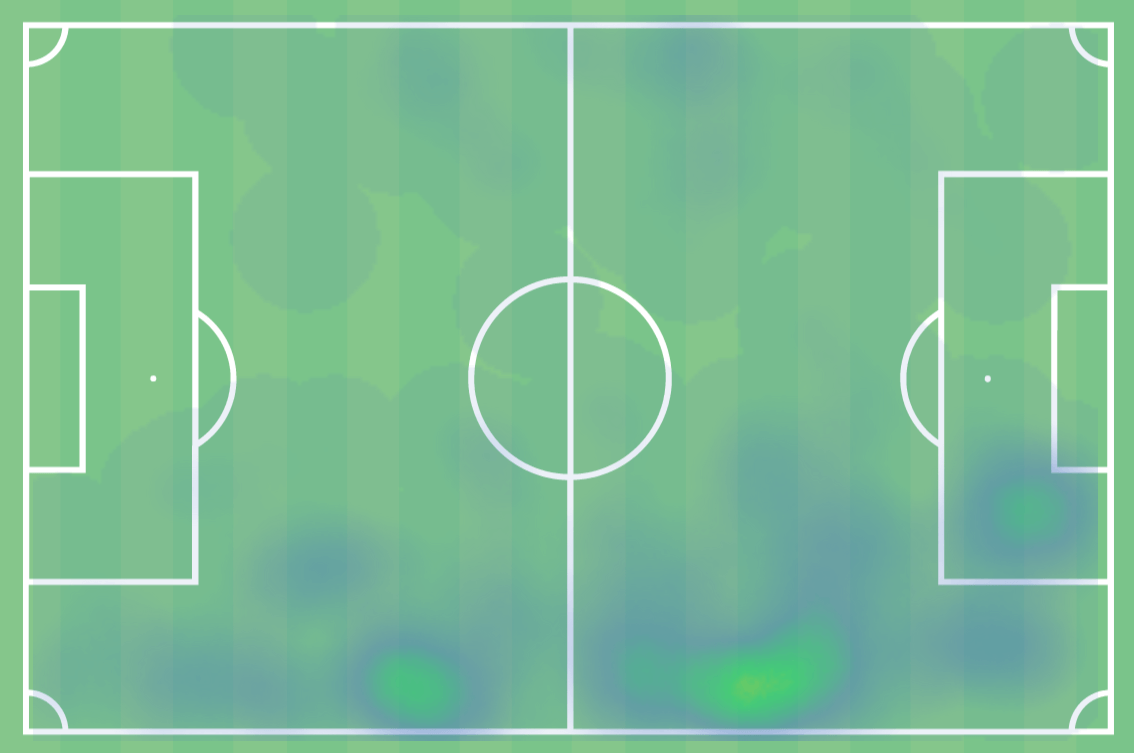 Comparing Kayky stats in senior football with his stats at the U17 level gives us a good impression of how good his adaptation has been so far and his potential. He attempts almost the same amount of dribbles per 90 (8.94 at U17 level and 8.48 at senior level) but completes a higher percentage of them playing against senior players (65% vs 78%).

At the U17 level, Kayky scored 0.8 goals from 0.42 xG (2.57 shots) per 90, had 0.27 assists per 90 and completed 86% of his 36.19 passes per 90. At senior level, he has scored 0.5 goals per 90 (1.5 shots, 0.16 xG) and also registered 0.25 assists per 90. His passing has remained similarly accurate (82%) even if his involvement is lower with just 25.93 passes per 90. So basically, Kayky is being equally effective against senior players than he was against players of his age and he’s even increasing his dribbling and scoring output. This suggests he’s ready to transition into a higher level of competition quickly.

Kayky is everything we could expect from a Brazilian winger. He combines his excellent acceleration and change of pace with a fantastic technique and the creativity and personality to dribble in any situation. As we mentioned in the previous section of the analysis, he completes 78% of his dribbles against older and physically mature players and is almost unstoppable in one-on-one situations.

His phenomenal dribbling skills and technique have a lot to do with his futsal background. Similarly to other Brazilian players, Kayky uses the sole of his feet to control and handle the ball, giving him absolute control in very tight spaces and becoming a very unpredictable player. His dribbles are also varied and defenders never know what he’s going to do next. He can dribble to the left and the right and once he has got past his marker he’s very quick with the ball at his feet so defenders can’t recover their position.

Kayky’s outstanding ability to get past players can be seen in his dribbles map below, showing all his dribbles with the first team. As mentioned, he mostly dribbles from the right side of the pitch and his completion is excellent. 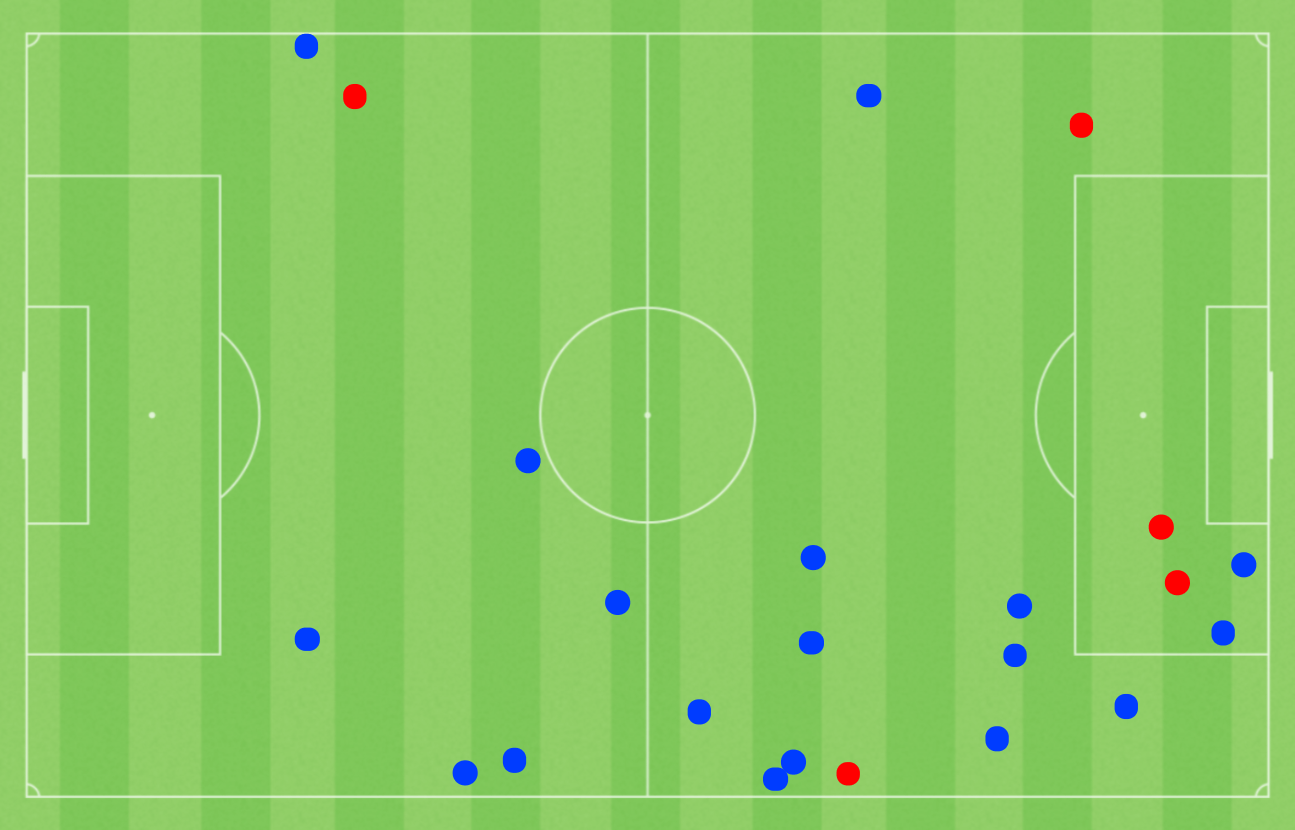 Another proof of his great technique is his first touch. Kayky can bring down long balls with astonishing ease and is capable of turning and dribbling in just one touch when he receives with his back to the goal. He needs this first touch to avoid getting into duels as he’s still quite small and undeveloped physically.

Below, we see an example of his first touch and technical ability with the sole of his feet. The ball comes straight from the goalkeeper and Kayky uses his sole to control it in the exact moment in which it bounces. With the ball dead under his left foot, he quickly turns and dribbles. 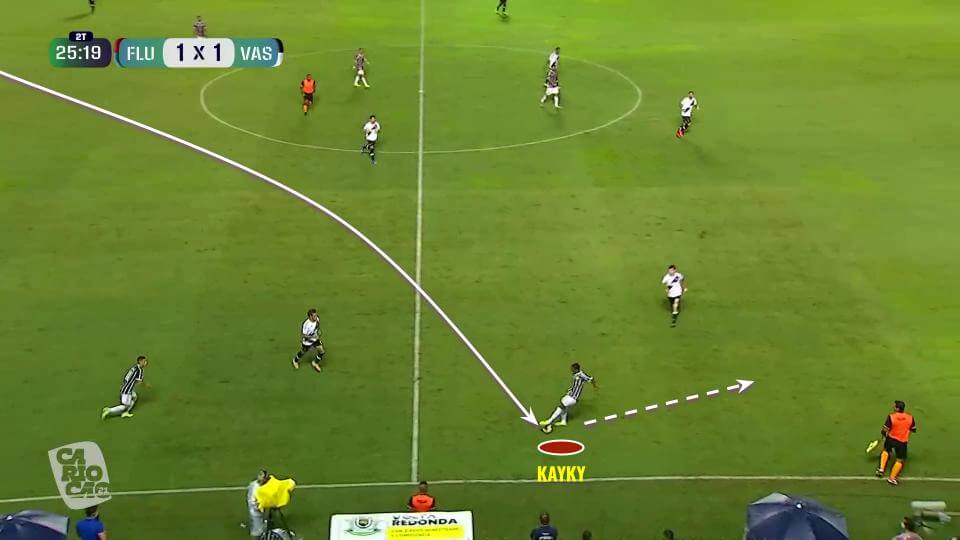 Now, let’s see some examples of how Kayky can take players on and progress using his individual quality. His close control of the ball enables him to take on several players in a row without losing balance and even if spaces between them aren’t big.

In the next sequence, we’ll see one of these slaloms. He starts on the right-wing and with a couple of very accurate and quick touches, he gets between the two first players. 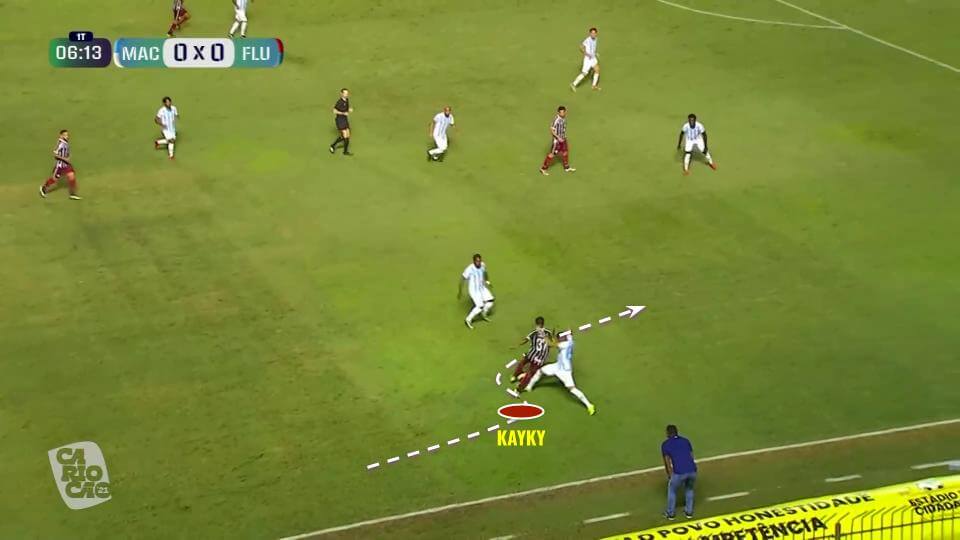 Then, Kayky uses his pace to leave both rivals well behind and when a third one steps out to mark him, he feints left and goes right to avoid the tackle and continue his run. At this point, he has already left three defenders behind. 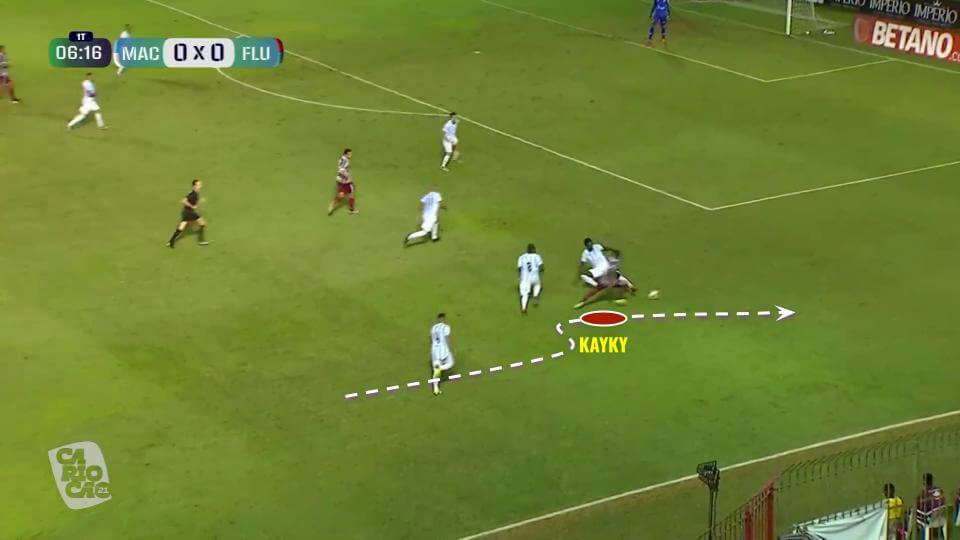 When he reaches a position in which he can’t dribble anymore, Kayky stays composed and raises his head to look for the best possible option. In this case, he finds a free teammate inside the box and despite the pressing rival, he accurately passes the ball to him. This shows that he doesn’t get tired after his runs, keeping calm and fresh to make a good decision. 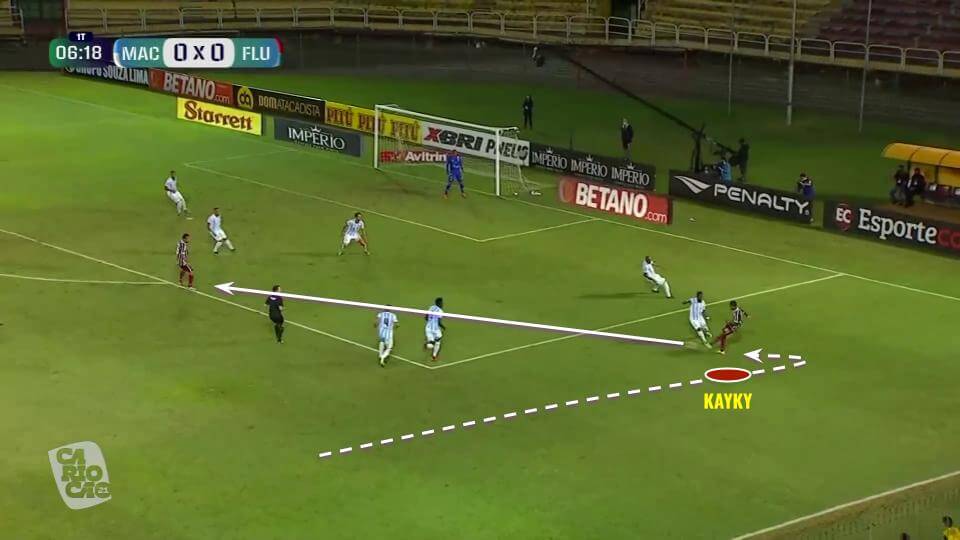 But Kayky’s dribbles aren’t limited to situations in which he has space to run and use his pace. When he’s in a steady position, he possesses the acceleration and agility to take defenders off guard and dribble past them. This also requires excellent control of the ball to avoid heavy touches. With defenders worried about blocking passing lanes and also his unpredictable dribbles, Kayky usually finds ways of getting past them as soon as they leave the slightest open space.

The next example is a very good one to see his ability to dribble in seemingly impossible situations. Kayky starts the play completely still but the moment the defender approaches him, he takes a perfect touch to dribble in the tiny space between the rival and the goal line. That touch needs perfect accuracy not to end in a goal kick and also excellent acceleration and agility to move into the small space. After the dribble, Kayky raises his head and puts a good ball that unluckily doesn’t find a striker. 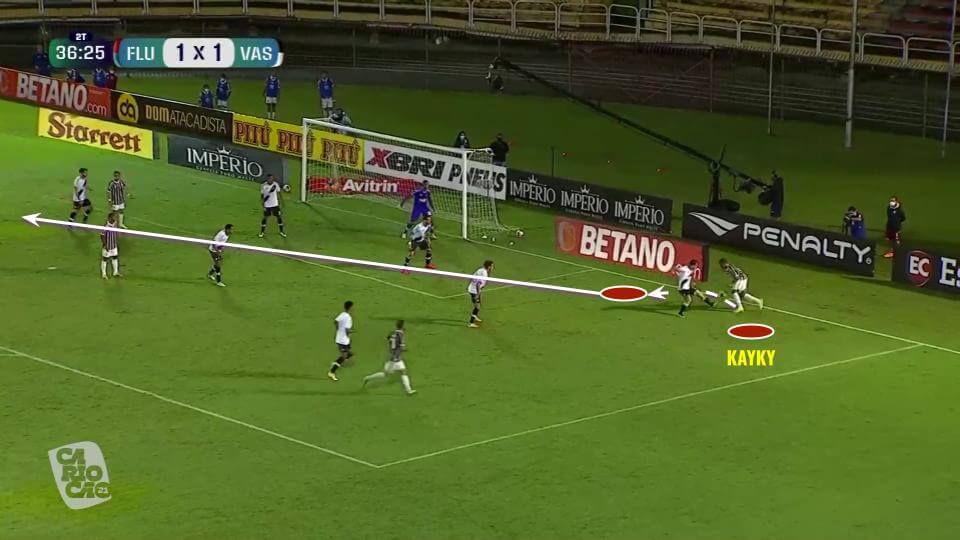 And again below, Kayky makes the same dribble to get into the box. From a steady position, he gets past the opponent using the very small space he left when trying to mark his strong left foot. 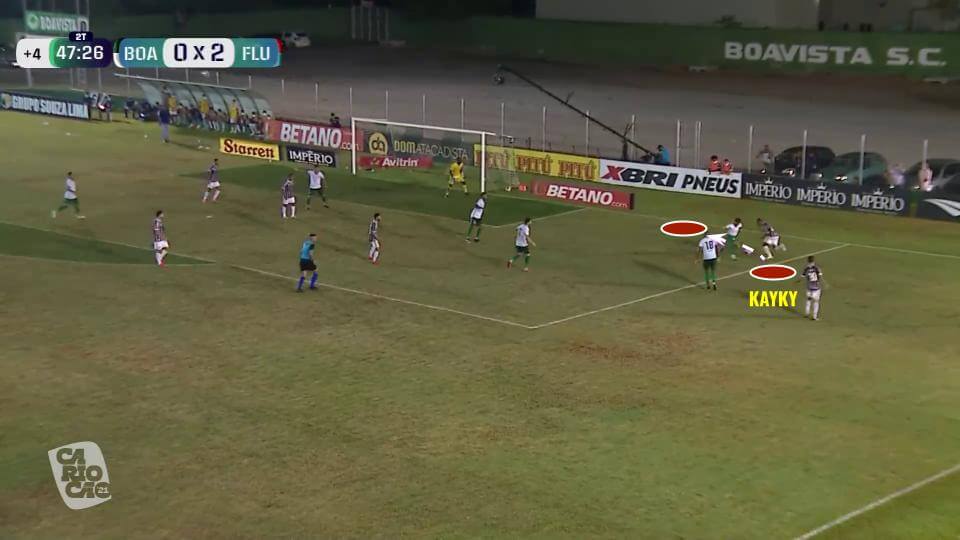 Kayky’s ability to get past players in every situation is his main weapon and why he’s been targeted by some of Europe’s biggest clubs. In the next part of the scout report, we’ll look at his passing ability and end product in general.

Kayky doesn’t always have the technique to control and dribble. He also has a very sensitive left foot to put the perfect weight on his passes, being capable of breaking the defensive line with his through passes or combining in tight spaces.

His passing quality is excellent. In the map below, we see every cross, key pass, long pass and pass into the box Kayky has attempted this season with the first team. We see his accuracy again is very high and most of his passes reach their target. He’s capable of putting short and tense passes into the box and also through balls from longer distances. This is even more impressive considering lots of these passes come after dribbling. 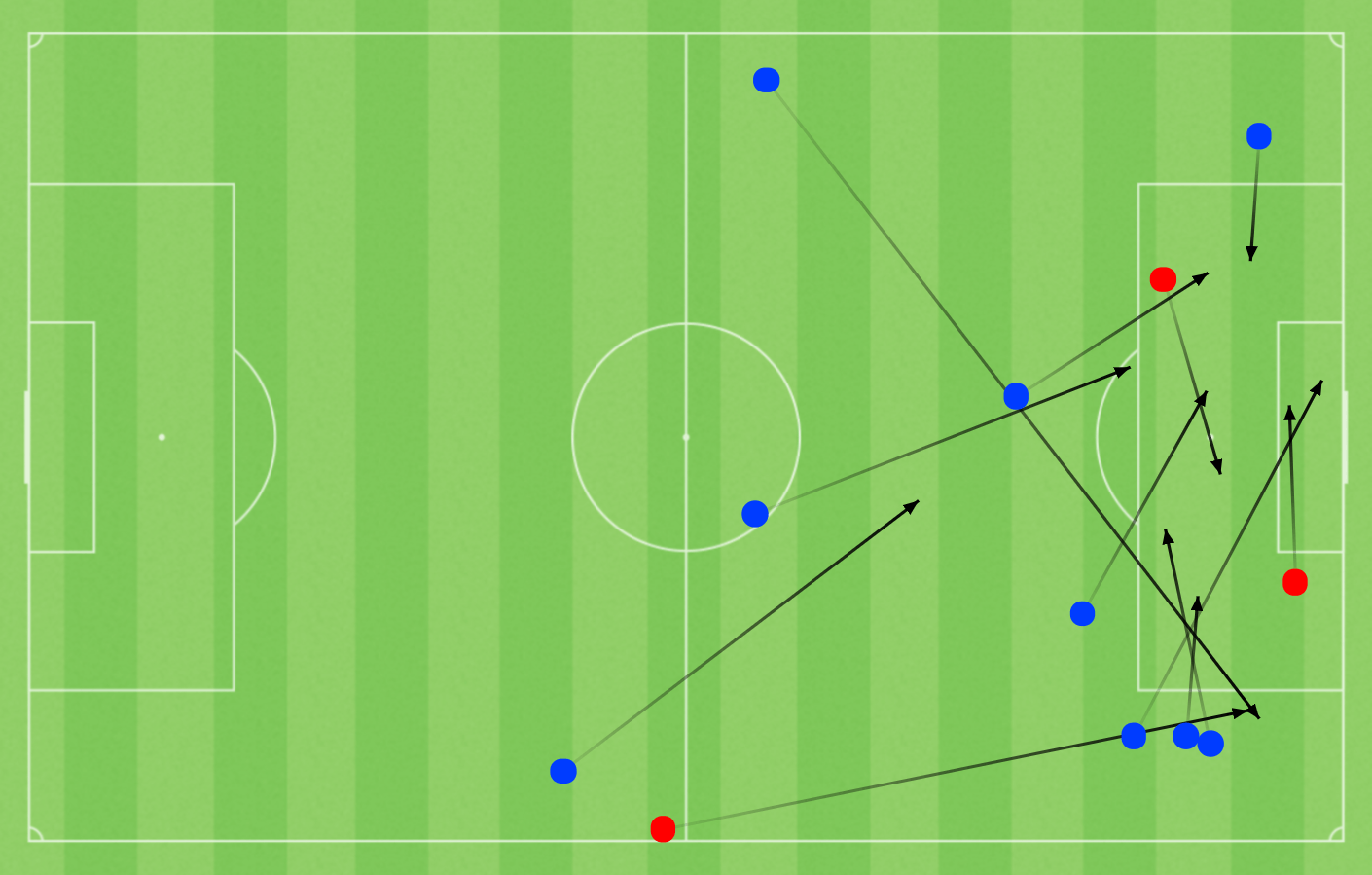 As an example of Kayky’s vision and passing quality, we show the next play. After driving the ball forward, Kayky spots his teammate running and puts a perfect through ball between two rival defenders and into the run of the striker. 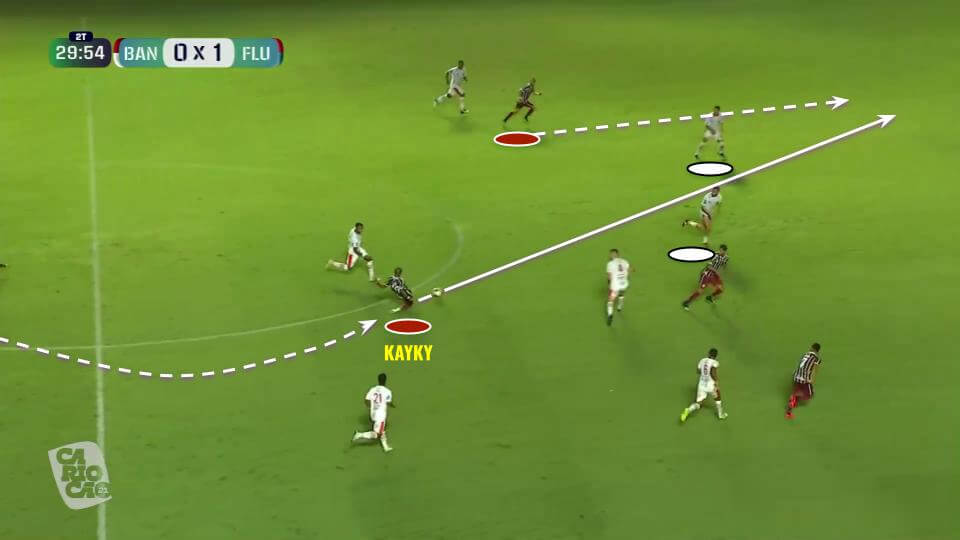 Kayky’s passing ability isn’t limited to assisting his teammates. He’s a very dynamic player who likes to pass and move to advance using quick first-touch combinations. He usually starts from the right side of the pitch and drifts inside as he plays one-twos with his teammates, progressing around the edge of the box.

The sequence below shows one of these combinations. Kayky starts on the right and plays a quick one-two with his teammate in the half-space. The movement after the pass is key to receive the ball again in a better position. 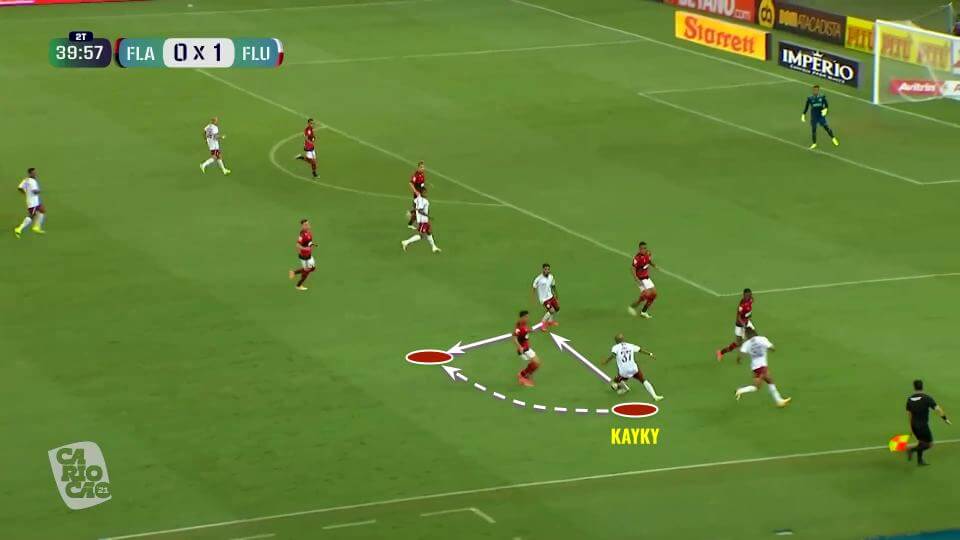 When he receives the ball back, he just needs two touches to play another one-two. This time, he sends the ball between the defender’s legs and continues his run to receive the ball back around the D. From there, Kayky takes a shot, finishing the combination with a scoring chance. 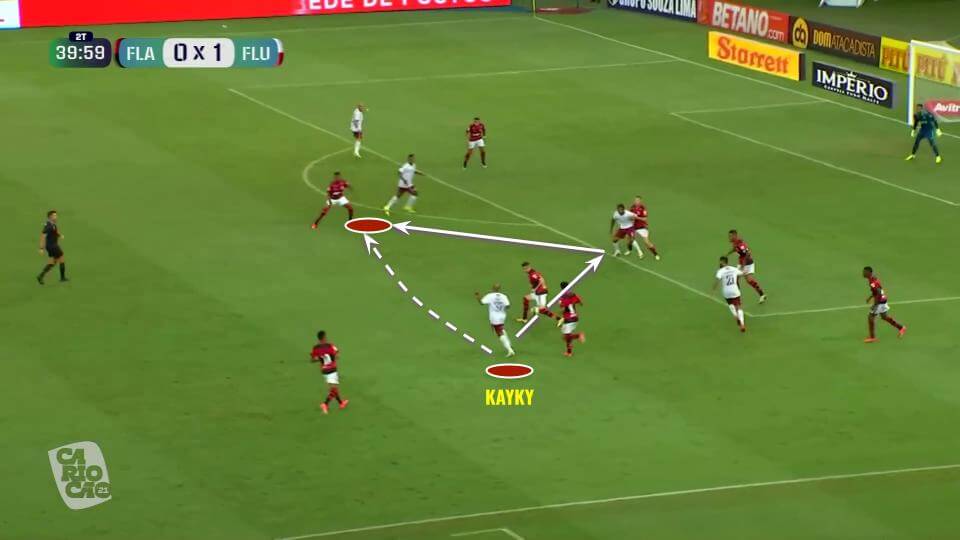 Another very interesting feature from Kayky’s game is that he doesn’t always want the ball to his feet. His dynamism also translates into runs in behind, trying to get into good positions to receive deep passes and score. With his pace and good reading of the game, Kayky also poses a threat with his off the ball movements, adding an excellent finishing ability on top of that. His fine left foot allows him to finish with elegant and well-placed efforts using the inside of the foot.

Below, we see an example of his runs and finishing ability. He uses his pace to leave the defender behind and when he receives the ball inside the box, he’s calm to control with his right and finish with his left with a low shot into the corner of the goal. 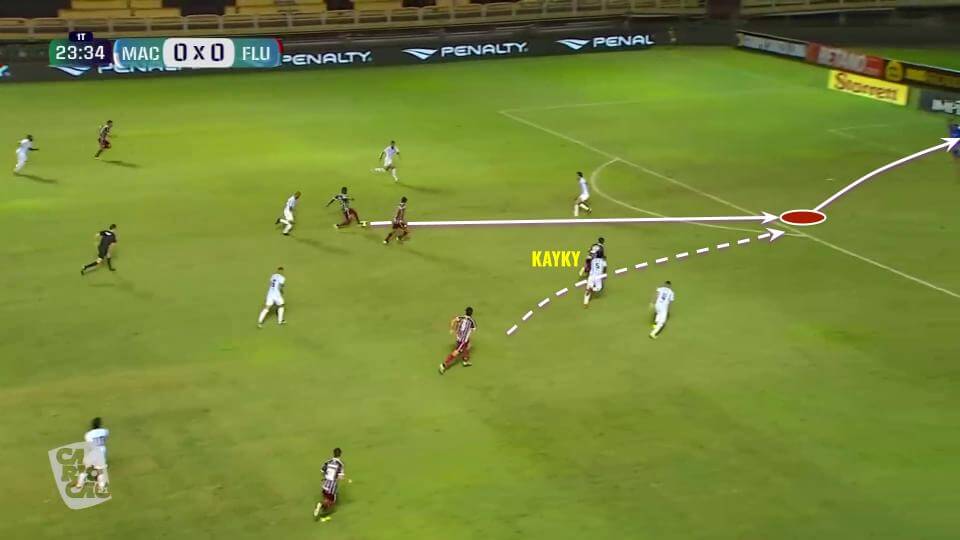 Kayky is starting to prove in Fluminense’s first team that he’s not only a phenomenal dribbler but also a player capable of producing goals and assists after his individual plays. The accuracy in his left foot and his dynamism make him a very dangerous player in any situation, something very valuable for teams playing in any tactics.

With just 300 minutes in seven games for Fluminense’s first team, Kayky has already shown he’ll be a start in the future. Brazil is full of talented players but finding one capable of dribbling, assisting, scoring and with great pace is rare.

Apparently, Man City have signed the Brazilian wonderkid for around €10 million. If he continues his rapid progression, it won’t be a surprise if he stays in the Premier League with the Citizens. Once he turns 18 in June, Kayky will be ready to leave Brazil and continue impacting games at the highest level.