Rodgers vs. Hasenhuttl: Performing well in transition and minimizing defensive errors are crucial for road to Wembley

The FA Cup semi-final will be the biggest match of the season so far for both Brendan Rodgers and Ralph Hasenhuttl. Given this season’s performances it is perhaps not a surprise to see Leicester reaching the semi-finals, but Southampton’s form has been extremely poor for the last few months, which is in contrast to their strong finish to last season. Nevertheless, the Saints have managed to reach Wembley, beating Shrewsbury, Arsenal, Wolves and Bournemouth on the way without conceding a single goal and scoring eight. Leicester have had a slightly more difficult path, defeating Stoke City, Brentford, Brighton and Manchester United to make it to this stage.

Both teams are coming into this game on the back of losses in their previous Premier League matches. Leicester lost 3-2 at West Ham, while Southampton were beaten 3-0 by West Bromwich Albion in a surprise result. It is even between these two sides in their last five meetings – both teams have won twice each, with a 0-0 draw in the Carabao Cup being their last match, which was won by Leicester City on penalties. Therefore, this semi-final could be quite close, despite the form book suggesting that the Foxes should be able to progress easily. This tactical analysis will point out some of the potential key battles in this semi-final, and the tactical approach that we can expect to see from both managers. 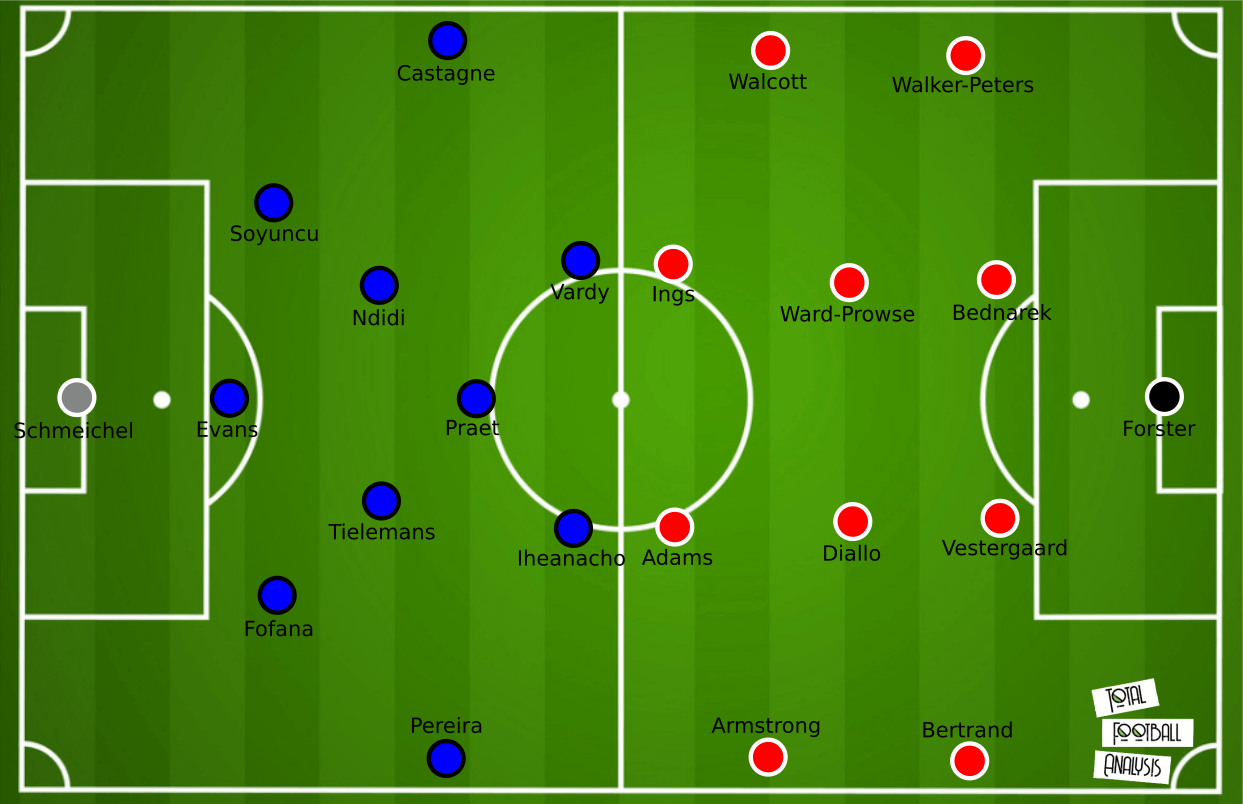 Leicester are expected to line up in a 3-5-2 shape, as they did against West Ham in their last match. Çağlar Söyüncü should return to the side following his absence due to COVID-19 since the international break, while we expect Dennis Praet to continue in midfield, ahead of James Maddison or Ayoze Pérez. However, Maddison would add some much-needed creativity to the side, and it is a question of whether Rodgers will include him following a disciplinary breach last weekend. Kelechi Iheanacho will partner Jamie Vardy up front – the Nigerian is in hot goalscoring form, while Vardy is the exact opposite, having gone 10 matches in a row now without finding the back of the net.

Southampton will line up in their usual 4-4-2, or 4-2-2-2 formation. There are still a number of injury issues within the Saints’ camp, with Oriol Romeu, Will Smallbone and Michael Obafemi all still unavailable, while Takumi Minamino is cup-tied, having already appeared for Liverpool in this competition. Ibrahima Diallo will get another chance to impress next to captain James Ward-Prowse due to the lack of options available to Hasenhüttl. However, he does have options out wide, and Stuart Armstrong should start along with Theo Walcott. Danny Ings will lead the line, alongside Che Adams, but it is possible that Hasenhüttl goes for Nathan Redmond instead of as well.

Leicester build-up and breaking onto the opposition half

The first tactical point we will look at is how Leicester will cope with Southampton’s high pressing. If Leicester manage to get past the Southampton high press it will create a lot of space up front which their fast wing-backs and Vardy could exploit. However, Southampton could force errors and mistakes in dangerous areas as well, and it is partly to counter their pressing threat that Rodgers will start with three centre-backs, to give them numerical superiority against the two Southampton strikers when attempting to play out of the back. 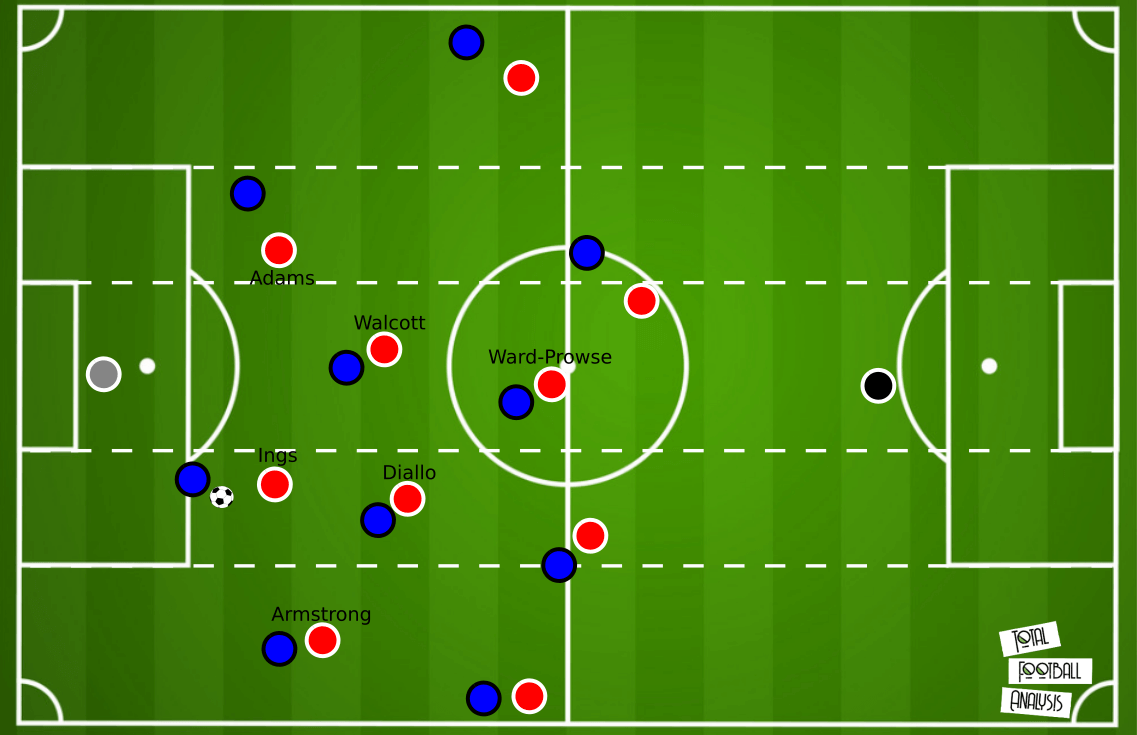 Leicester tend to push their wing-backs onto the opposition half of the field to provide depth in their build-up. Wilfred Ndidi and Youri Tielemans position themselves diagonally, and their movement off the ball is essential to try and receive possession from the centre-backs in space. This movement also often opens up passing lanes towards Iheanacho and the number 10 (Praet in this case). Vardy is usually positioned in the left half-space waiting for the long pass towards the flank, or a chipped pass over the defence down the middle of the pitch. Because of a 3v2 in midfield, Southampton’s opposite side winger is expected to take one of Leicester’s midfielders while the other one will move up to press the wide centre-back and eliminate the Foxes’ numerical superiority in that area of the pitch. Diallo will be the player to press higher and mark the other Leicester central midfielder, while Ward-Prowse will probably drop deeper to mark the number 10.

A player who could be key in this phase for both teams is Fofana who is able to progress with the ball at his feet when he has space, and so his runs could unsettle Southampton’s defensive structure. However, Southampton are capable of creating traps to lure Fofana into a blind alley as well from where they could regain possession and counter-attack.

Vardy’s pace and positioning, coupled with the Southampton centre-backs’ lack of speed, means that we can expect the Foxes to try and find him with passes in behind wherever possible. An example of a possible scenario is given below, taken from the game against West Ham. 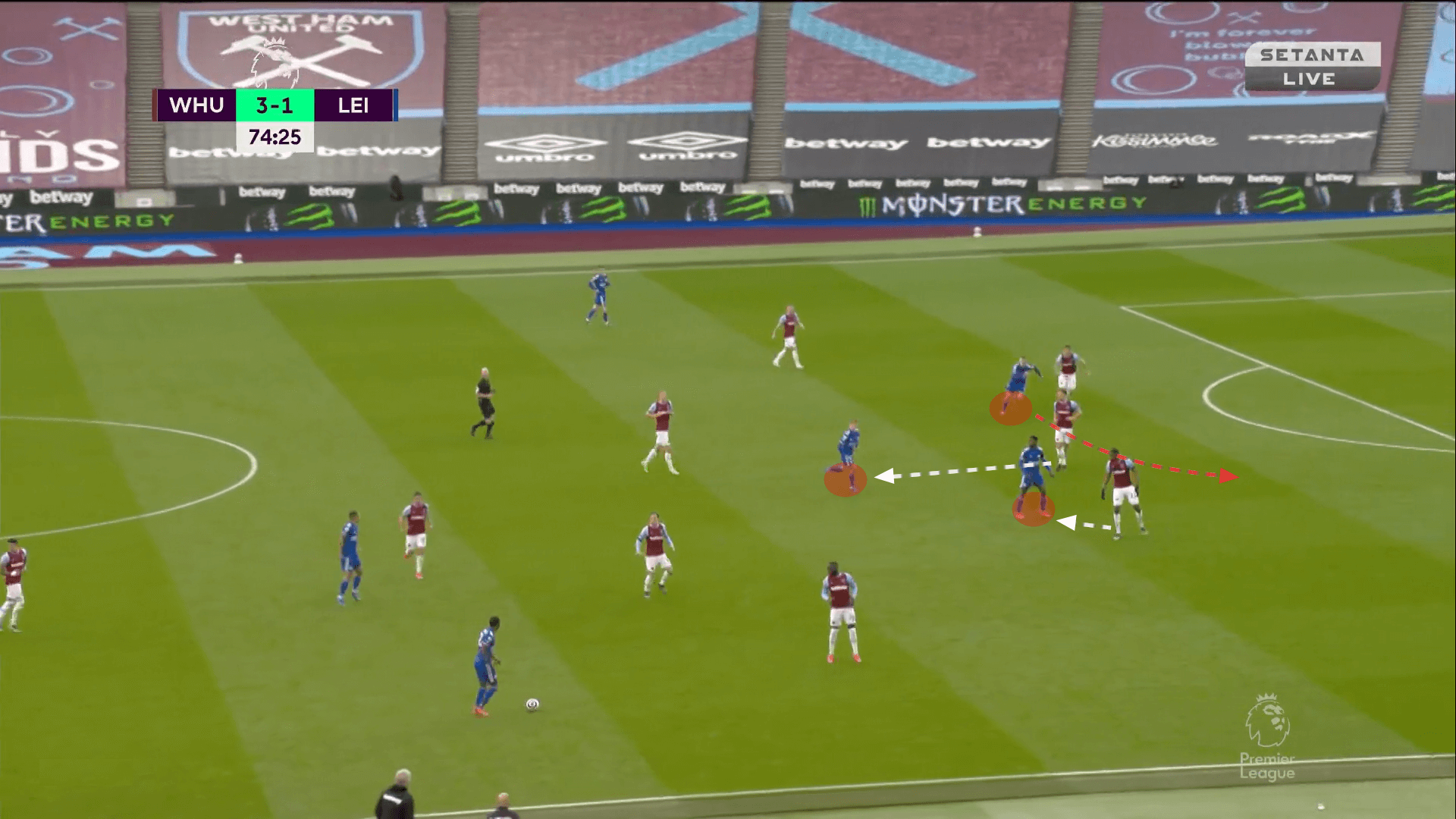 When the ball is with the right wing-back Ricardo Pereira, or even Tielemans when he moves out to the flank, Iheanacho looks to drop a little drawing the attention of one centre-back which opens the space behind him for Vardy to run into. There are two potential ways of the ball getting to Vardy – the first is where Pereira directly tries to pass the ball behind the defence, while the second option is to pass to Iheanacho or the number 10 who then have the space to attempt a through ball for Vardy. Either way, it is important for Southampton’s central midfielders to cut out the passing lane towards Iheanacho in such situations.

Southampton “wingers” narrow positioning to cause problems for Leicester

Hasenhuttl’s tactics demand a specific position in their build-up. Their wide midfielders are positioned narrow while their full-backs offer width. This way their central midfielders are free to roam to create passing lanes towards their wingers positioned in the half-spaces. 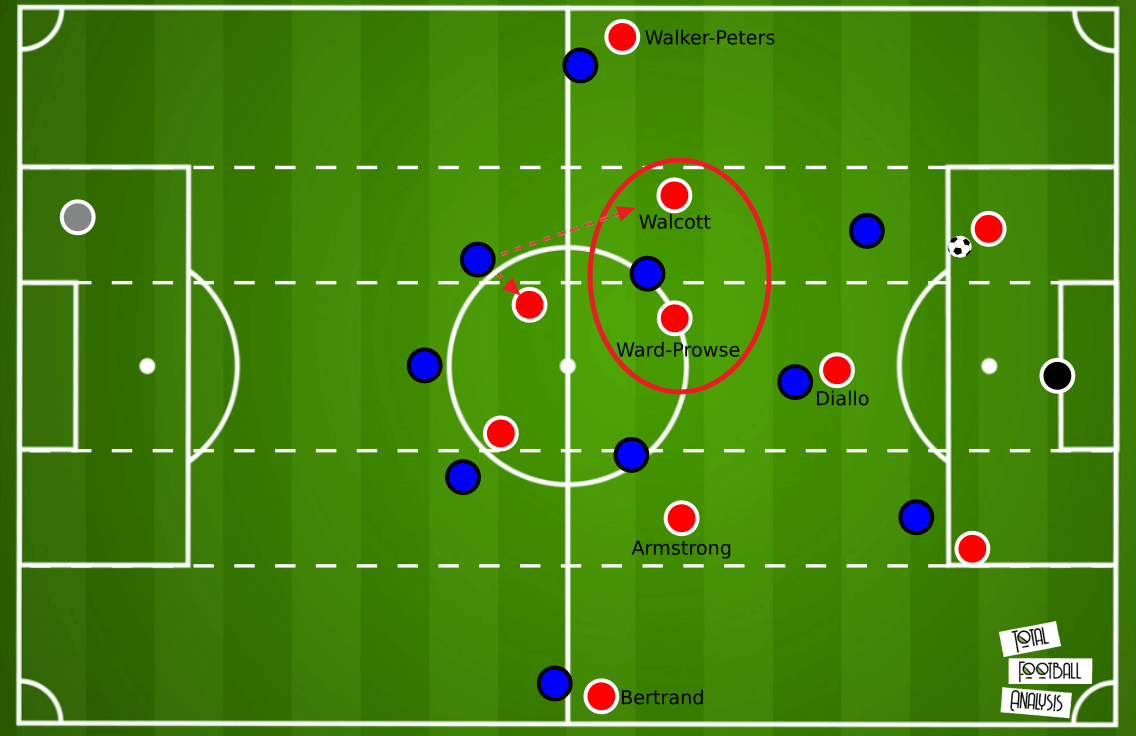 We can see how Southampton tend to position themselves in the build-up with a lot of rotations between Ward-Prowse and the wingers, while Diallo is usually positioned deeper, with his high work rate and limited creativity being the reasons why it is better that he is closer to his goal in these situations. This type of positioning will put the Leicester defenders in a dilemma in trying to decide when to engage in tight marking and when to apply zonal marking. The image shows how a 2v1 can be created by taking advantage of this uncertainty. At the same time, if the wide centre-back does get attracted to the narrow winger, that could create space for Ings to run in behind.

The next image is an example of this, where Ward-Prowse has gone to the left and Minamino has come central to create a diamond in midfield. 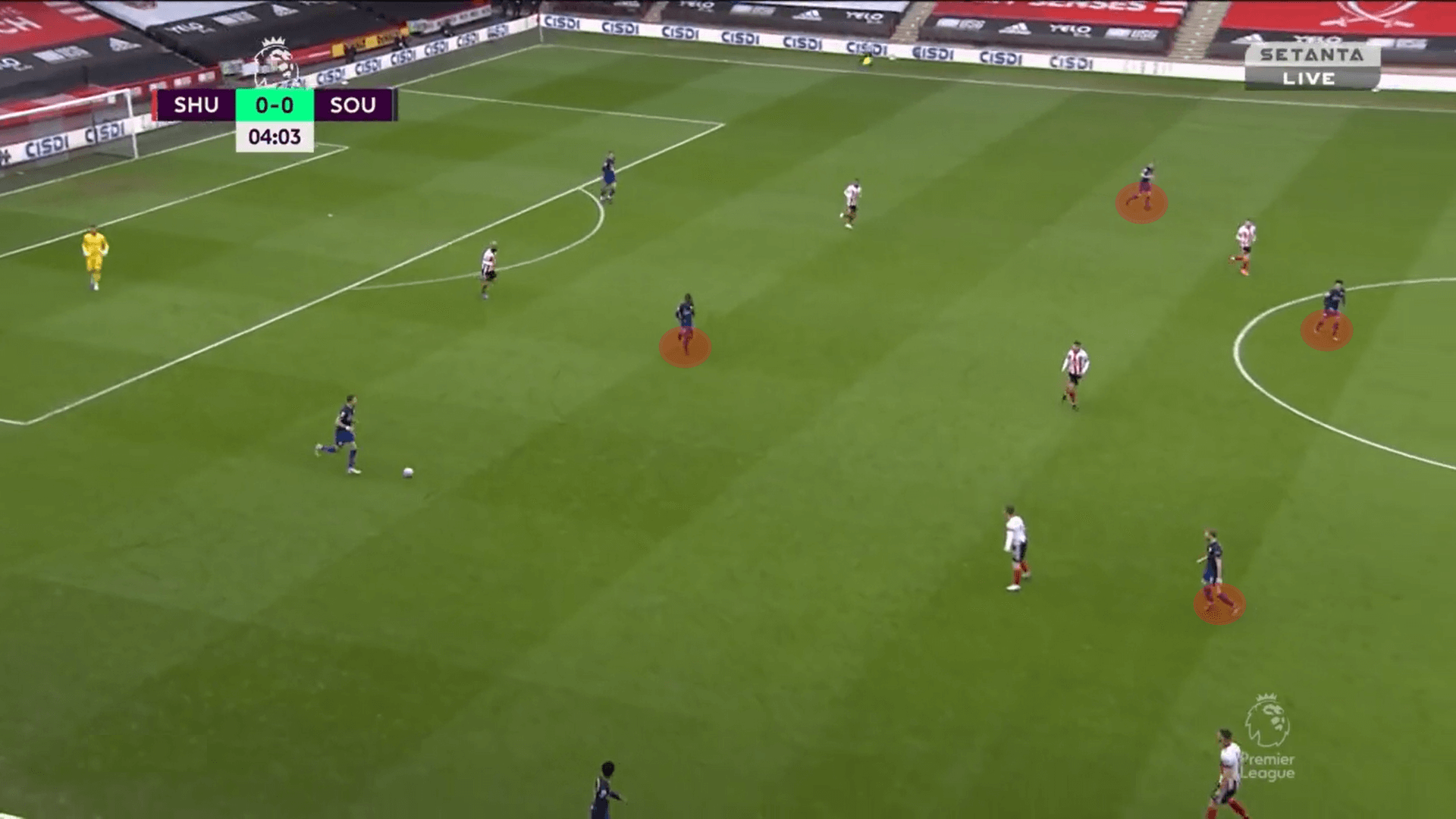 This is another example of the variations we can expect to see in terms of the positioning from Southampton’s midfield. The Saints’ full-backs will be the ones providing width, which should allow them to rotate in a similar manner higher up the pitch as well. The Leicester centre-backs are not fully comfortable playing in a three-man defence in the defensive phase and they are often ball-oriented, which can create opportunities for the Saints if they employ similar rotations. 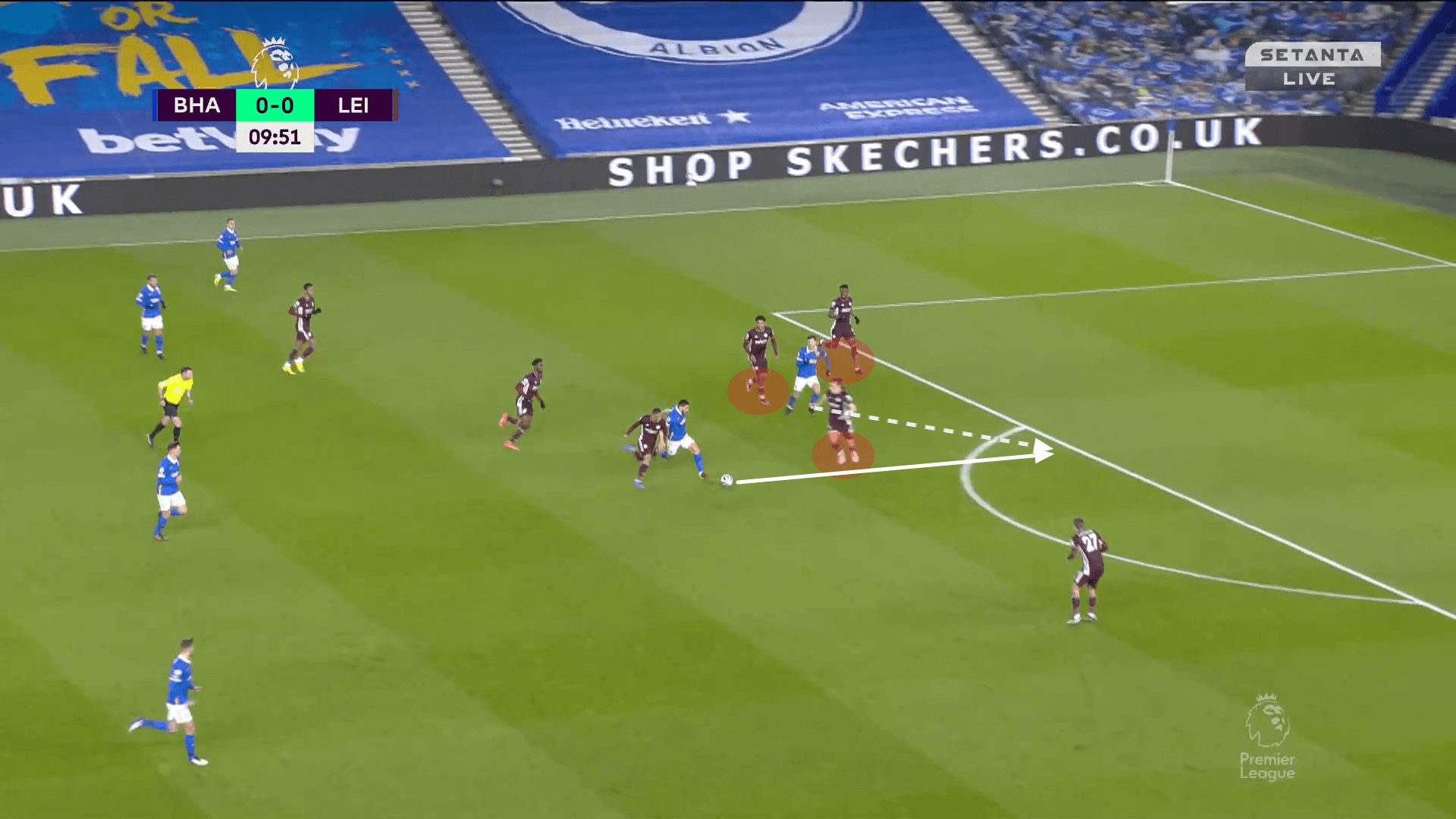 This example against Brighton shows how Leicester failed to defend the space behind Söyüncü when he needed to step up to press the man on the ball. Fofana and Amartey are both looking at the ball carrier and are therefore not aware of the run being made behind Söyüncü, while their positioning prevents that player from being caught offside as well.

The three-man defence has functioned well for Leicester this season, but constant injuries have meant that there has been a lot of chopping and changing at the back, which has led to a lack of chemistry between the centre-backs. There is no doubt that Fofana, Evans and Söyüncü are quality centre-backs, but if the Southampton forwards and wingers are able to make such runs in behind while either of the strikers is in possession, they could create some quality chances.

Both teams thriving in transition

Leicester and Southampton are both stacked with dynamic players especially out wide and at centre-forward. Both teams therefore thrive in offensive transitions, and look to get the ball forward quickly to take advantage of their pace and dynamism. This next image shows the threat that Leicester pose from such situations which Southampton will need to be aware of. 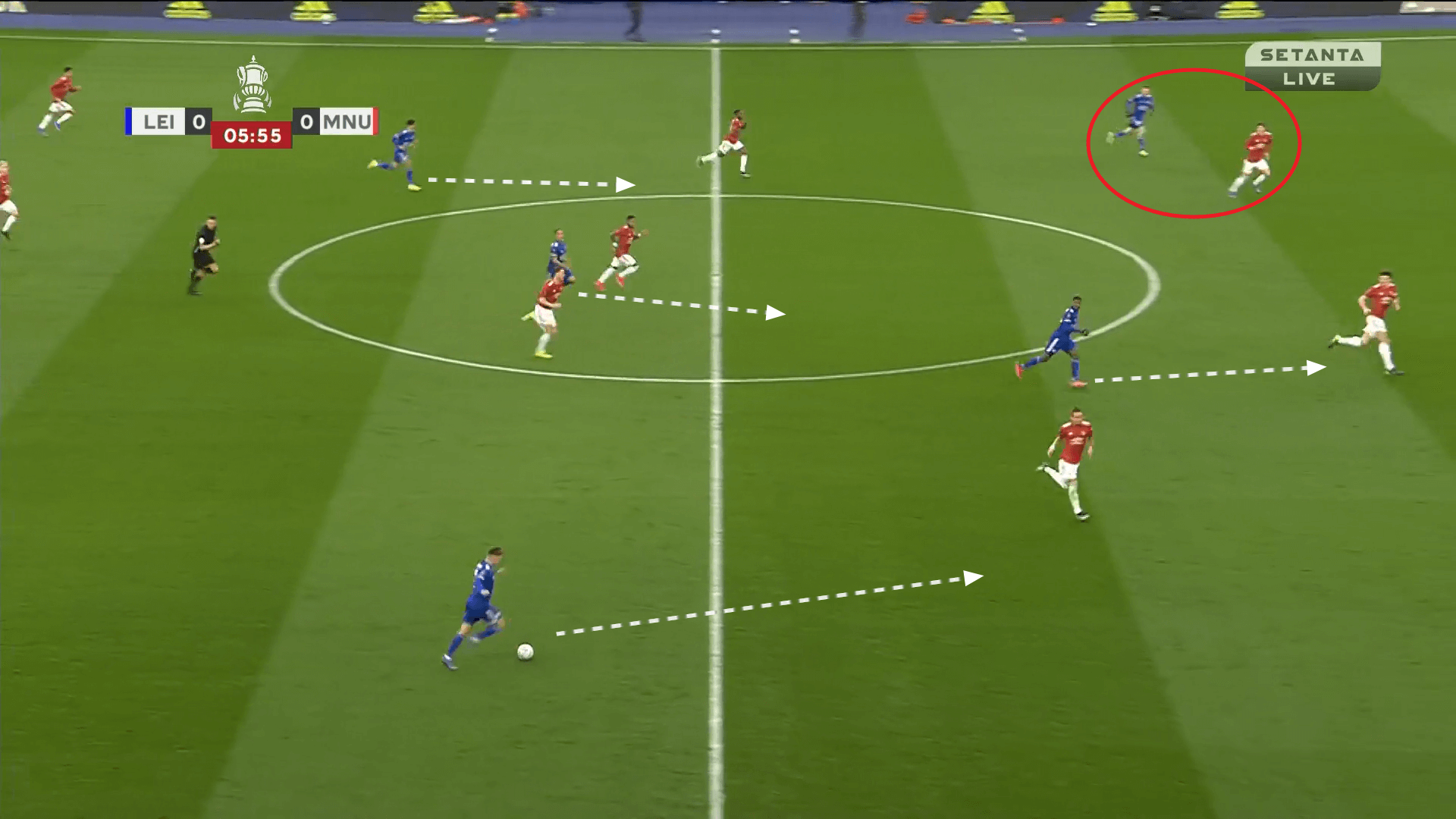 Leicester tend to run into offensive transition in numbers, getting forward with at least five players, which offers a lot of options for them in the opponent’s half. Of course, the main threat in such situations is Vardy – he thrives in space, and creates it for himself by moving out wide to drag a defender with him. This creates space between the centre-backs for him to then run into when the ball arrives, and the Southampton centre-backs will need to be aware of his positioning at all times if they are to have a chance of stopping him. 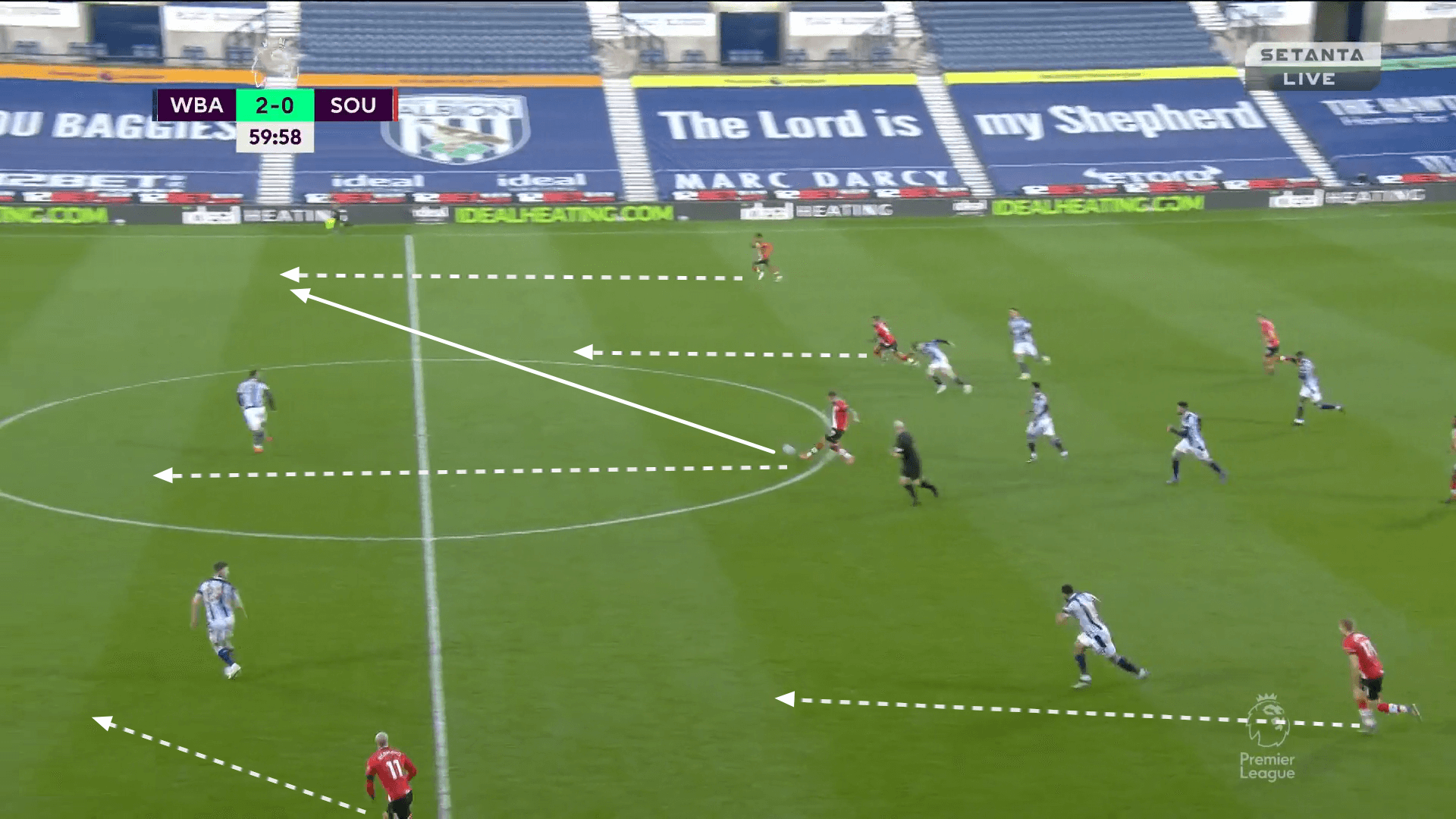 Similar to Leicester, Southampton also tend to have at least five players advancing during counter-attacks. This usually involves the two forwards and wingers, supported by late runs from Ward-Prowse who likes to arrive late at the edge of the box. Unlike Vardy, however, Ings tend to position himself centrally during these situations. In the image, we can see Ings passing the ball to the right and continuing his run directly towards goal. Ings is aware that he is most dangerous in the penalty area and he allows others to run with the ball while he tries to find pockets of space in the penalty area where he can receive the ball and get a shot away.

Looking at this analysis, we can assume that this match will be a high-paced and energetic encounter. Both teams thrive in offensive transitions, but they will have to show that same energy when they are in defensive transition as well to avoid being exposed. Rodgers and Hasenhüttl will both be keen to make it to the FA Cup final, and we can expect tactical tweaks from both managers as the match goes along as well, as they try and find the advantage that takes them through to the showpiece event.