The Premier League returned after the international break with a marquee fixture, as Leicester City hosted Manchester City at the King Power Stadium. Memories were still fresh from the reverse fixture, where Pep Guardiola’s team lost 5-2, but this was a markedly different City side now, having opened up a commanding lead at the top of the table and unlikely to collapse in a similar manner.

City were able to come away with a 2-0 win, with Kevin De Bruyne stating post-match that there was only one team playing in the game. Manchester City dominated their opponents throughout the game, barely giving them a sniff of goal, but, despite losing this match, it can be said that Brendan Rodgers tactics worked to an extent, especially defensively where City struggled to break down their compact block.

This tactical analysis will provide an analysis of the positional battle between Leicester and Manchester City, and also show how Guardiola adapted his tactics in the second half.

Despite having key players such as Ricardo Pereira and James Maddison returning to the squad, Rodgers did not make too many changes to the side that beat Manchester United in the FA Cup sixth round, so Marc Albrighton retained his place at right wing-back and Ayoze Pérez started behind the two strikers.

City’s lineup, in contrast, was full of surprises. As we predicted, Pep prioritised those players who did not travel for international duty over the past two weeks, which resulted in large-scale rotation. Benjamin Mendy returned at left-back, while Fernandinho, Aymeric Laporte and Gabriel Jesus all started after having rested for two weeks, while Sergio Aguero started as well, following the news that he will be leaving City at the end of the season after 10 years of excellent service.

In our tactical preview, we mentioned how the City’s FA Cup game against Everton would be a good example of how they could attack the 5-3-2 block that  Leicester were expected to line up in. The Toffees started with the same formation and defensive structure in that game, where the strategy for City during build-up was to create a 3v2 overload at the first line, use the wide centre-backs to advance the ball in the free channel, and exploit space behind the wide midfielder if he stepped up.

However, despite sharing some of the key tactical concepts, things did not work as planned in this game. Rodgers carefully adjusted his team’s defending to try and nullify City’s approach play, to good effect, especially in the first half. Leicester were incredibly compact and closed all spaces between the lines, leaving no room for City to exploit.

The defensive shape was still a 5-3-2, but they tried to keep the three horizontal lines tight to each other as much as possible. Leicester defended as a unit, even at the expense of lowering their engagement line to their own half, with the aim to reduce space between the lines as much as possible. The image below shows how hard the Foxes were trying to keep their backline outside the box and not to retreat early. This was a strategy to reduce the space behind Wilfred Ndidi.

Another area where they did well was to use body orientations to cover passing options, usually those in the centre. City were rarely able to circulate the ball through Fernandinho throughout the match as the Leicester strikers were extremely disciplined in covering him. Meanwhile, Leicester had the numbers to overload the centre, and they forced City to the wide zones, where they were then pressed with the help of the touchlines acting as a natural barrier.

The next image shows how City were trying to pull the wide midfielder out of position through their centre-backs, who would carry the ball upfield and then exploit the space behind him. City used Kyle Walker as a hybrid player to try and create a back three in possession – he played as a right-back and a right centre-back, depending on where the ball was and whether City had possession or not. Pep also wanted to control the defensive transition, so Rúben Dias was much deeper than the other two to form a “V-shape” to cover the space behind his partners.

However, City could not progress into the central areas even when dragging the wide midfielder out. Pérez was very disciplined in covering the inside while applying pressure on Walker. Additionally, Ndidi knew he could move closer to De Bruyne as the striker (Vardy) would be on Fernandinho – the benefit of keeping three lines compact. This meant that the central spaces were closed and City struggled to create attacks through here.

Leicester’s defensive structure was good enough to ensure that even when space did become available centrally, on occasion, City were unable to capitalize on it.

Here, Laporte brought the ball out, but the wide midfielder – Youri Tielemans did not step up. Instead, he kept retreating to get tighter to De Bruyne, letting the Frenchman advance. This was a trap of sorts to keep City outside, unable to circulate the ball centrally because the striker (Kelechi Iheanacho) was pressing from behind. In the following image, the white highlighted space is the favoured area from where City would want to attack, but the body positioning of Ndidi and Tielemans narrowed the passing lane inside. City also lacked a player who would get into those spaces to receive possession. Leicester were content to let Laporte pass to Mendy, allowing Albrighton to deal with him in 1v1 situations. Mendy struggled to get past Albrighton and deliver quality crosses from the left as a result, and therefore had a muted impact on the game even if he did score City’s opener.

Since City faced difficulties in finding space in front of the defence, they were forced to go behind it. However, this was also well-calculated as Jonny Evans was alert to defend the space behind his partners. Thus, even if Jesus was released in situations like this, his runs did not cause too many problems for the hosts. 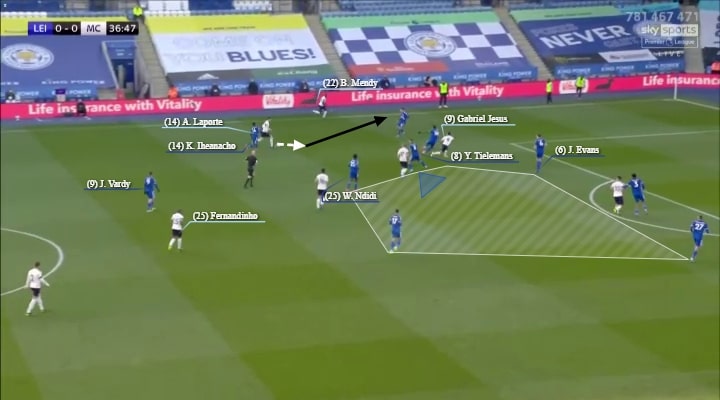 The next image is another example of this, with a similar outcome. This time, space was available in the blue zone and De Bruyne did position himself there, so things look better for City than in the previous instance, but they still struggled to access those areas.

The pressure from Iheanacho on Laporte was important, as he usually let the defender go past him, but would then come from behind or from the inside to limit his passing angles. Even when he was close to the ball, Rodri was unable to receive as Iheanacho covered the pass towards him, while Laporte could not pass into the centre. Again, we can see Vardy nullifying Fernandinho in the black shaded area. Thus, City had no way to move the ball quickly and into areas from where they could do damage. 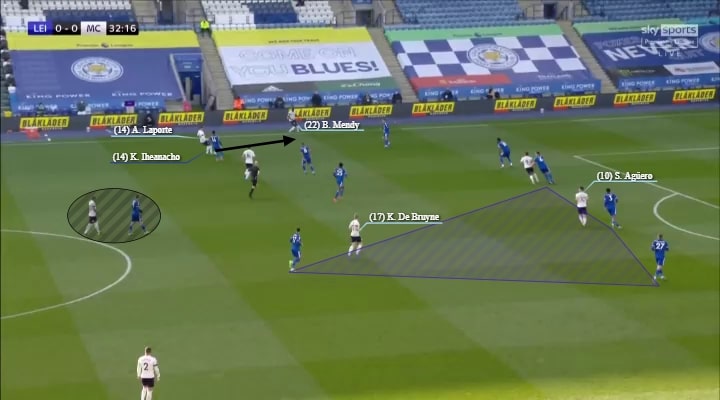 City found it difficult to continue their attacks even when they tried to switch play in midfield, as they could not pass on the ground. The opposition did well to block passing channels and so City were forced to play lofted passes more often.

For example, City had a 2v1 wide overload in this scenario with Mendy and Rodri on the far side. However, the ball could not be passed on the ground as Leicester had enough numbers around to intercept, while Fernandinho was once again in Vardy’s cover shadow.  De Bruyne’s only option was to loft the ball to Rodri, which gave Leicester the time needed to adjust their positioning and shift over, which would not have been the case if a pass along the ground had been possible. 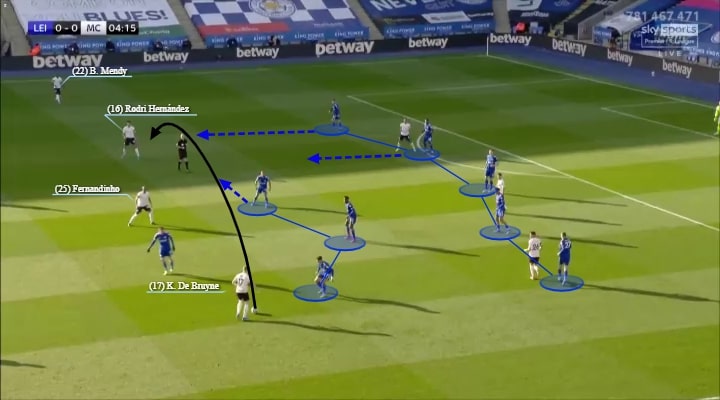 We can therefore sum up Leicester’s defensive approach here:

City made some changes in the second half as their setup as clearly not working in the first half of the game. They tried to keep the same concepts: using width and playing out with a back three but the execution was a little different. Walker would now sometimes provide width on the right, with Rodri dropping in as a centre-back, which would drag the opposition out and imbalance their shape. 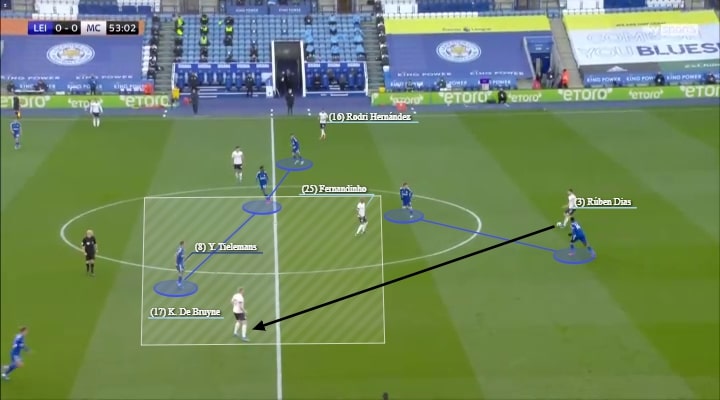 The above image shows how Fernandinho and De Bruyne overloaded Tielemans in the framed region. Rodri was on the far-right, which took Pérez wider, and also enlarged the horizontal distance between Tielemans and Ndidi (because the Nigerian international was trying to cover Pérez)

They used this 2v1 overload to reach De Bruyne in the half-spaces more often in the second half. The centre-backs were encouraged to pass diagonally to the Belgian midfielder from outside of the Leicester block. However, the receiver still needed to deal with pressure from behind in these areas, which increased their difficulties in reaching the final third. 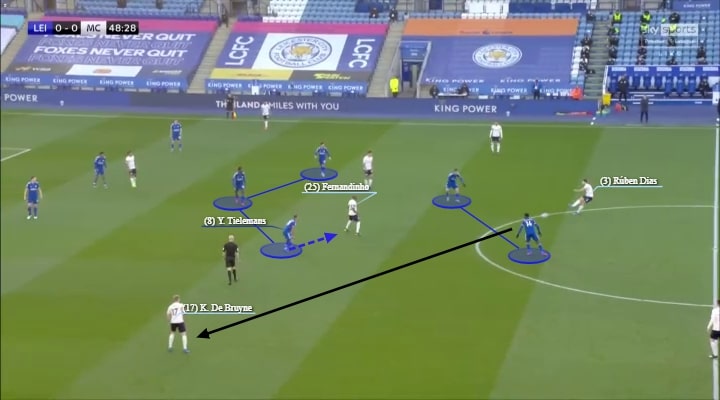 Here we see another example, and this gives a better idea on how the 2v1 worked. Here, Fernandinho moves up the pitch to get away from the Leicester strikers and cleverly position himself in an area where Tielemans was attracted towards him, which meant that De Bruyne was now free in the half-space. Dias was then able to find him in space with a simple pass. 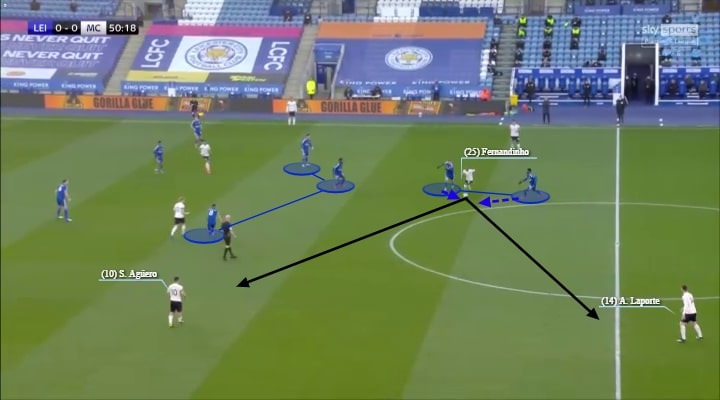 However, these changes nearly came with a heavy cost as there was one occasion where City could have been counter-attacked dangerously. The manipulation on Tielemans worked but sloppy decision-making from Fernandinho nearly led to a goal being conceded.

Fernandinho was too late to pass to either of the two options as shown here. When he tried to turn, the pressure from the two strikers forced him to rush his pass, and even though De Bruyne’s positioning took Tielemans inside to open up the half-space, City could not advance through Agüero and the ball was lost in the middle third.

This was also the reason why City were trying not to use Fernandinho to initiate their attacks. He only received 26 passes in this game, which is half of his average tally of received passes per game (52.34) this season. City did not want to take risk of losing possession in critical areas on the pitch, and fortunately, this particular situation did not harm them.

This game may not have been the most entertaining one in terms of chances created or goals scored. However, the way Rodgers adjusted his defence to restrict City’s attack deserves a lot of praise. The Northern Irishman anticipated that his team would not have too much possession, but was well-prepared for this and forced the away side to dig deep to come away with a win.

The key to City’s victory was their determination to win the game. Tactically, they did not outplay the Foxes but they were better mentally. They rarely gave the ball away in dangerous areas, remained focus throughout the game, and tried to play in their own way despite things not going too smoothly, especially in the first half. It is also notable that City were able to nullify Leicester’s threat on the counter-attack, which will serve as good preparation for the Champions League clash against Borussia Dortmund.